It’s that time of year again; the pumpkins are carved, the Halloween decorations are up, and the sweets are ready by the front door for trick or treaters. But the one question on everyone’s lips is which Halloween costume should you wear for the big day?

With this question in mind, the experts at DIYS.com were keen to find out what the most popular Halloween costumes are around the world. To do this, monthly search volume data was collated for the most common Halloween costumes across the world’s wealthiest countries to determine which one comes out on top.

The Most Popular Halloween Costumes Worldwide 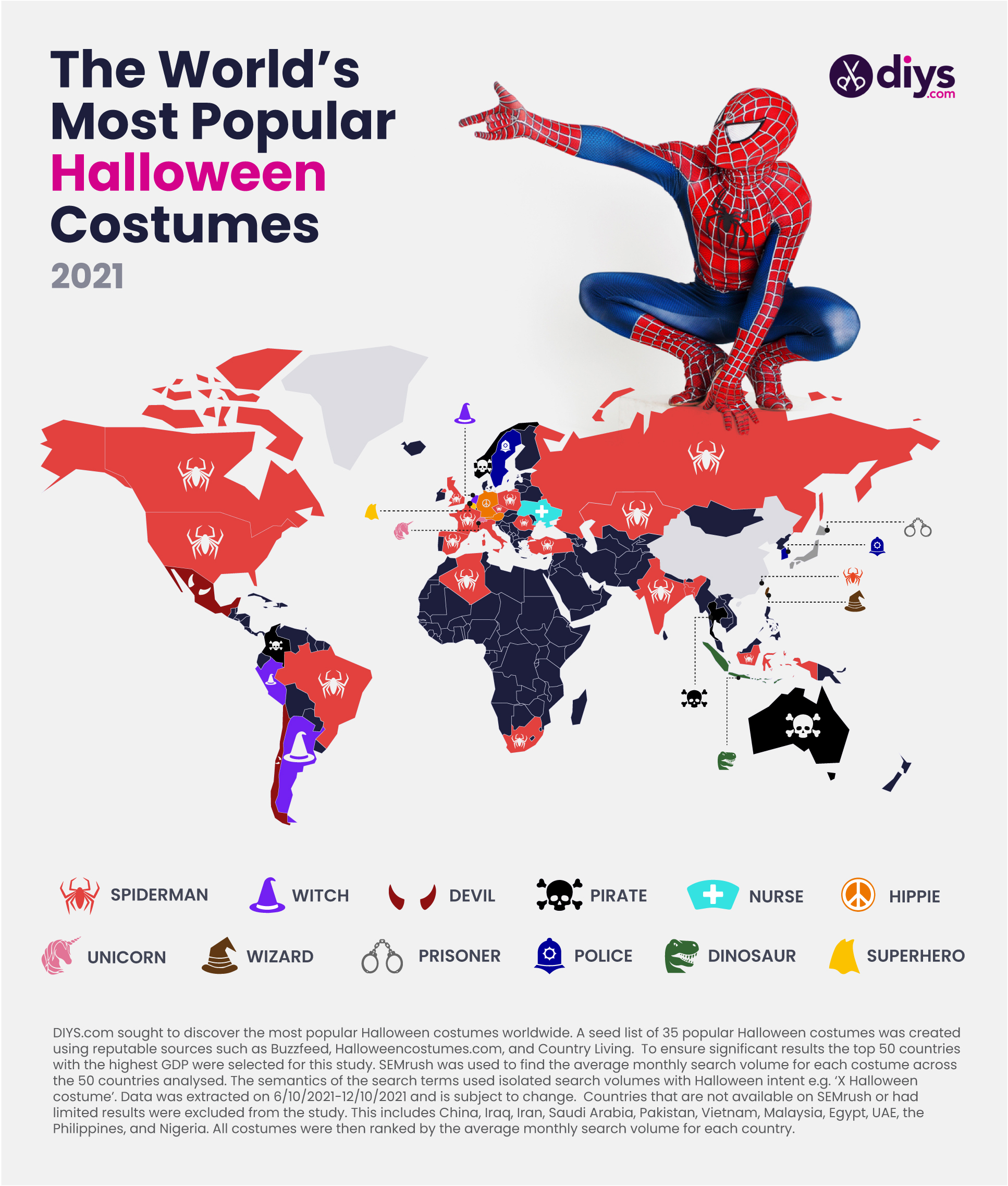 With great power comes great responsibility and that is no different in this study. Spiderman is by far the most popular searched for costume, coming top in 17 countries. The Marvel superhero dominates in four out of the six continents surveyed, coming out as the top choice costume in Asia, Europe, Africa, and North America.

Maybe you fancy yourself as a swashbuckling buccaneer? In which case in second place, and a long way back behind Peter Parker, is the pirate costume – an easy costume to create yourself. This ranks highest in five countries, with people in Algeria, Australia, Columbia, Norway, and Thailand all choosing to don a tricorn, eye patch and hook on the spookiest night of the year.

If you are a fan of the black arts, then third on the list is the witch costume. Coming top in four countries (Argentina, Netherlands, Peru, and Venezuela), this is the highest place for a ‘traditional’ Halloween costume and definitely a sorceress vibe going on in South America, boasting three of the four countries.

Completing the most popular Halloween outfits, we have a raft of costumes that featured top of the list in one country:

The countries that like to dress up the most for Halloween

As the supposed origin of Halloween some 2,000 years, the UK is understandably popular for Halloween costume searches with 121,290 per month.

Completing the top three is Mexico with 102,350 monthly searches. Probably more famous for their Dia de los Muertos (Day of the Dead) festival, it is expected that Mexico would probably feature somewhere in the top rankings.

Brazil features fourth on the list with 97,360 monthly searches and is the highest ranked South American country on the list, nearly 60,000 ahead of ninth placed Columbia (39,790) and around 70,000 higher than twelfth placed Argentina (24,950).

In seventh place is Australia; the only representative on the list from the continent of Oceania with 62,760 monthly searches. Canada wraps up the North American contingent with 47,930 monthly searches and takes ninth spot, whilst Russia completes the top ten with 33,310.

You have to go all the way down to thirteenth on the list until you reach our first Asian country, India (23,760). You have to go even lower to sixteenth for our first African representation, South Africa, with 9,930 monthly searches for Halloween costumes.

So, we can reveal 2021 is the year of the Spiderman in terms of Halloween costumes. If you wish to remain traditional, a witch is still a popular choice, or you may want to see if your local shop has any sizes left for a unicorn or dinosaur if you fancy being a little more ‘out-there’. Whatever you decide to wear, may your Halloween be frightfully enjoyable.

50 Cute Halloween Costumes For Girls to DIY This Year