of 1
Peperomia
Peperomia Ginny Care: How to Grow & Care for the Tricolor Peperomia
Buy Now 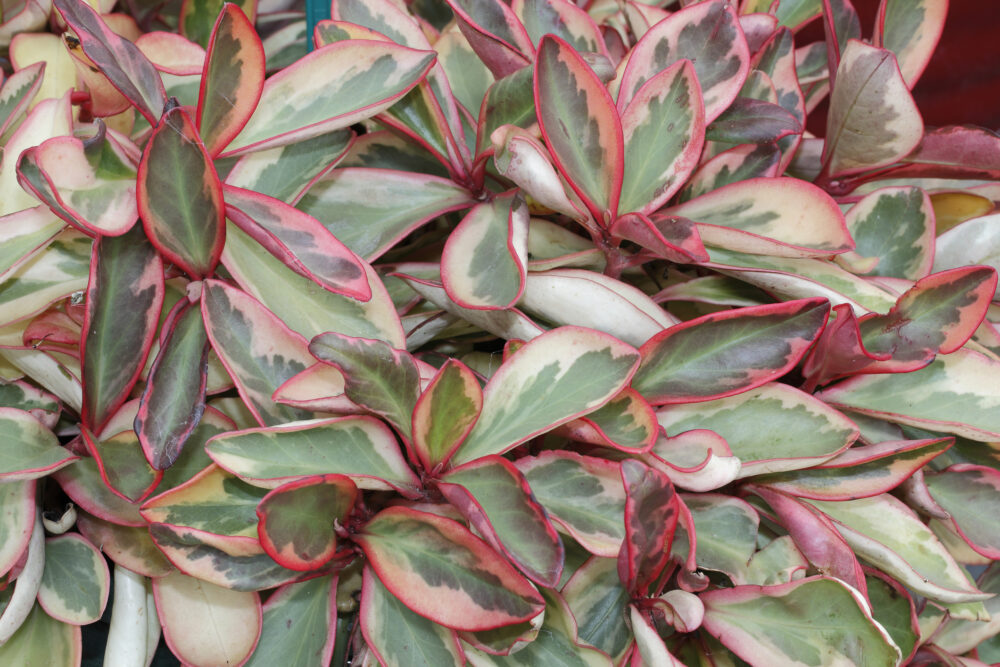 If you’re looking for a perennial plant with clear-cut looks that don’t need any special treatment, then you’d probably consider growing the Tricolor Peperomia variety. Even when faced with low light conditions, this plant’s aura will still rock your indoor space and without taking too much of it.

It’s a miniature houseplant with fleshy leaves that hold the same attributes as other succulents. But making your Peperomia Ginny plant bring a refined ambiance to your home without any hold-ups would require a blow-by-blow caring guide that lays out the signature growing requirements. Read on to find the exact pointer you need to work with to make this Peperomia variety grow in a grandiose manner.

The Tricolor Peperomia adapts to indoor environments pretty fast. Coming from thePiperaceae family, this deep-colored perennial houseplant is native to both tropical and sub-tropical parts of South America. It also traces its roots back in Central America. It’s commonly grown in pots over gardens since it’s far easier to control the moisture, sunlight, and temperature conditions it needs to thrive.

Other names it commonly goes by areRed Edge PeperomiaandTricolor Peperomia. The Tricolor Peperomia, same as most other species in thePiperaceae family is known for being low-maintenance. And that makes it a classic option for any beginner looking to dive into the world of gardening. Its structure is firm enough to make the plant grow in an upright position and the leaves have a dark-green tone that looks winningthroughoutthe seasons. 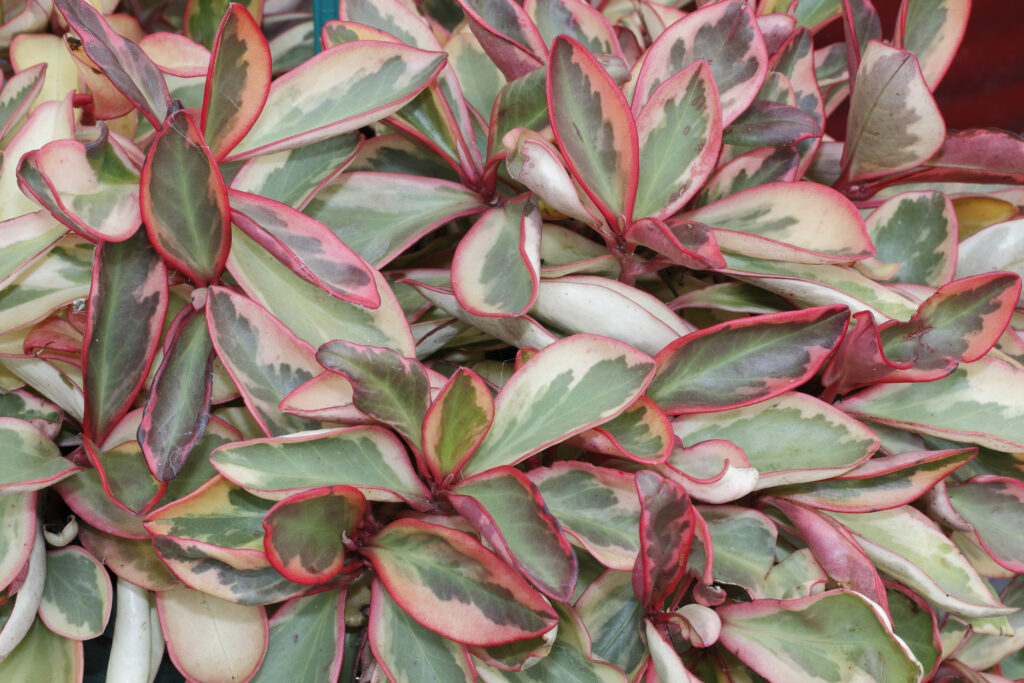 Popular Species of the Peperomia Genus

If you don’t find the Tricolor Peperomia visually appealing, then there quite a number of other varieties commercially sold across gardening stores and nurseries which I bet you’d consider buying. Here’s a list of the most wondrous types you won’t regret adopting and nurturing:

How to Grow the Peperomia Ginny Plant

The most gainful way to multiply the number of Tricolor Peperomias in your garden or living space is by propagating them using leaf, stem, or tip cuttings. The division method also works just fine for most Peperomia varieties. And that’s especially true if your Tricolor Peperomia is growing in the garden. For both methods method to work without any holdups, you’ll need to:

Most varieties including the Peperomia Ginny produce miniature flowers that don’t produce any fragrance. When the blooming season is over, get rid of them to maintain the appearance of your Tricolor Peperomia. Avoid overhead watering to keep the flowers from rotting while they’re alive.

This plant’s foliage immensely takes the show, so the flowers will be somewhat insignificant. If your Peperomia Ginny plants are growing outdoors, you want to make the edges of the lawn clean and free from weeds that would drain away phosphorus which is essential for the flower formation process.

For perennials native to tropical and sub-tropical regions, you want to grow them in soil that drains well. Use normal potting soil and amend it with equal portions of peat moss and perlite. These two amendments help the soil become a little more porous, preventing the soil from staying soggy for too long. It’s best to top-dress the soil with organic matter.

Natural organic materials such as eggshells, coffee grounds, green tea leaves, and banana peels would help make the soil a lot more nutritional-dense.Organic matter also helps retain some bits of moisture. Alongside that, we also recommend using loamy or sandy soil since they both allow drain water much faster compared to other types of soil.

Peperomias prefer soil with high pH, so you want to keep it anywhere between 6 to 7.5. You don’t necessarily need to transplant your Peperomia Ginny houseplant, except for the rare occasions where it could outgrow its original container.

If the soil is gradually becoming loose, that could be a sign the plant is about to get root-bound. Transplanting your Tricolor Peperomia to replace the old soil with one that’s strengthened with more nutrients and has the capacity to support drainage a lot better is perfect for its optimal growth.

Tropical plants have a striking adaptation to allow them to store water so they can survive the dry months. And that makes them a lot more drought-tolerant. Even so, you’ll need to water your Tricolor Peperomia quite regularly and in an even pattern mostly when the temperatures are warmer. But while doing so, you want to make sure the soil dries up completely before watering this radiator plant again.

Keep the leaves dry while watering and don’t leave the soil soggy for too long since it could cause the roots to start rotting. If the damage is intense, you risk losing the entire plant. I like to water all my Peperomia varieties after every 10 days when the temperatures are warm. Inversely, you’ll need to reduce the number of times you water your Tricolor Peperomia by a significant margin during winter.

Feeding isn’t necessary especially if you’re growing this perennial indoors. To meet the nutrient requirements for your Peperomia Ginny, you want to use a slow-release fertilizer that’s well balanced, ideally in the ratio of 20-5-10. A stellarstudy conducted by Michigan State University suggests that it’s ideal to run a soil test before feeding your perennial plants, so you can a fine print of the exact nutrients that are lacking.

If, for instance, the test shows that you don’t need to add phosphorus, then you want to use a fertilizer that’s made in the ratio of 20-0-10. and Besides using fertilizer, you can also top-dress the garden bed with compost manure or leaf mold.

Peperomia Ginny plants look a lot more graceful and gleaming when brought up under bright but slightly filtered light. Direct sun rays could damage this plant’s foliage and distort the color code by denting the leaves. If you see any dark spots on the leaves that could indicate that your Tricolor is suffering from intense sunburns.

And it’s no reason why indoor light tends to make this perennial beauty more radiant than when growing in the garden. It can adapt to low-light conditions as well as fluorescent lighting. With a flared-up preference for USDA hardiness zones 10 to 12, it implies that your Tricolor Peperomia could withstand temperatures ranging between 20 –25 degrees Celsius.

Most Peperomia varieties don’t require any intense grooming or maintenance routine. It will only need some regular trimming only when the leaves begin to appear bushy. And to avoid losing the entire plant, you want to dissect parts that seem to show signs of rotting or bacterial infections. Rotting is mostly caused by overwatering, so you’ll need to avoid that at all costs. Get rid of all the leaves that have already wilted to maintain the plant’s spunky appearance. I also tend to pluck off any leaves with dark spots.

The Tricolor Peperomia isn’t prone to any serious pests or diseases but can lose its vigor and graceful look when neglected for a considerable amount of time. The dense color on the foliage will begin to fade if you place it under the bright sun for longer periods. You can reverse this condition by moving your Tricolor Peperomia to somewhere with enough shade to block the excess sun rays.

You’re more likely to be faced with the same issues if you keep the soil soggy longer than usual. Overwatering causes the roots to decay, making the plant miss out on the essential nutrients it needs to produce chlorophyll and bloom. Keep the leaves dry when watering to prevent any further rotting.

You might also have to deal with common pests such as fungus gnats, caterpillars, mealybugs, and spider mites. Using insecticidal soap orNeem oilwould help suppress the numbers if the infestation is massive. The latter could also help cure any fungal-related problems.

Peperomia Graveolens Care: How to Grow & Care for the Blue Glow Peperomia