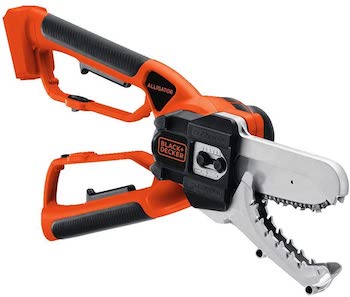 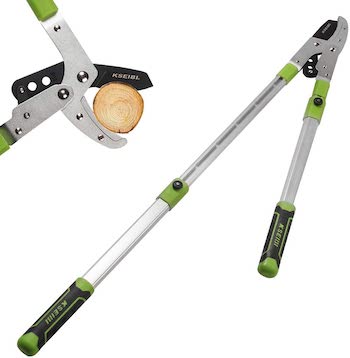 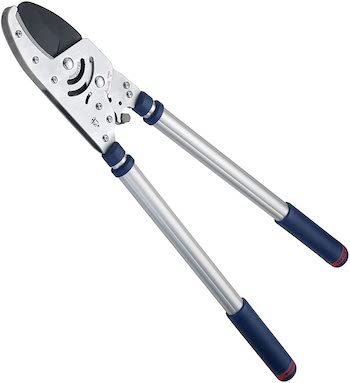 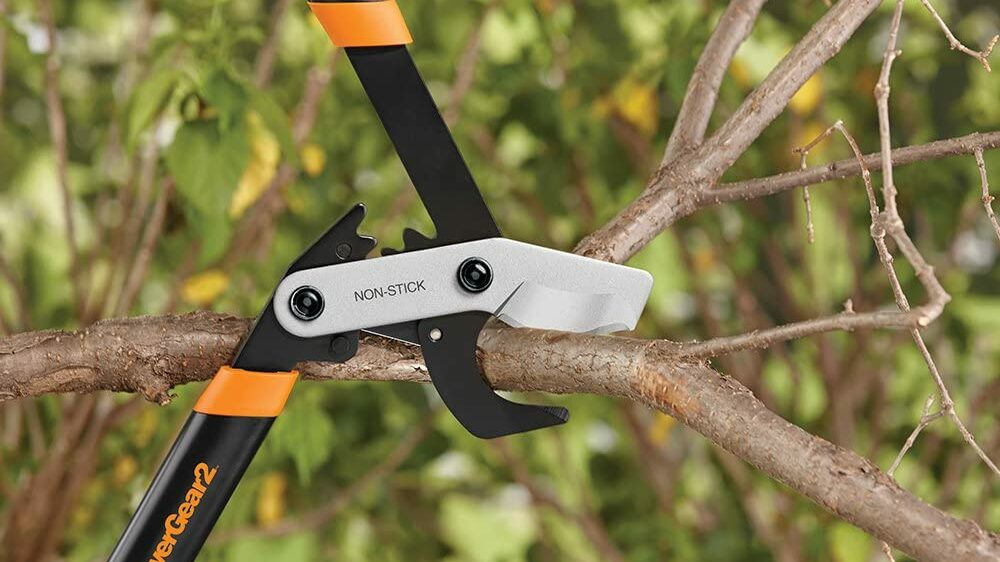 Like us, have you recently looked out into your own yard and realized that the long winter has left many of your bushes, trees, and other branch-having plants looking unruly and a little out of control? Well, it’s about that time of year for everyone where the loppers come out, and the greenery gets trimmed back, not just for visual appeal (although that’s certainly part of it as well), but also for the benefit of the plants themselves.

Clearing off dead branches, dried twigs, and overgrowth from your bushes and trees will help them thrive better as spring comes, but it certainly takes a particular kind of tool to do it successfully and effectively. 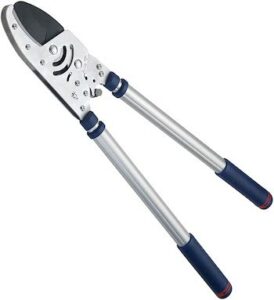 Loppers are a large garden tool that resembles a pair of very large crafting secateurs, but with much longer handles. They are used for trimming small branches and twigs from trees, bushes, and other branch-having shrubberies. The blades are large and sharp enough to cut clear through branches (albeit smaller ones), and the handles are very long so as to let you reach up higher than you are tall, reaching lower tree branches and those at the tops of bushes and hedges. They are operated with two hands and used to help neaten your plants’ look and shape, trim off dried or dead pieces that don’t benefit the plant, and generally refresh, revitalize, and reshape the base so it can continue growing more healthily.

In general, there are two kinds of loppers that people might feasibly own for home use.

Either of these lopper kinds might have one of two kinds of handle.

If you’re still feeling like you could use a little more help in making your final choice, check out this pros and cons style list that we made about the seven best lopper designs we came across in our search.

These loppers fromFiskars are built for long-lasting quality, just like the brand’s well-known regular home scissors. The blade here is made from fully hardened steel and coated with a non-stick coating that helps you cut with fewer effort thanks to smooth action. The loppers have telescoping handles that let you extend their reach from 24.5″ to 37″ inches using a twist-and-lock system. The handles are also made from durable steel, but the ends are cushioned for your hands by shock-absorbing foam grips shaped for comfort when you’re applying pressure.

Though most previous buyers found the loppers satisfactory overall, a few came bearing a word of caution about an inherent learning curve. Because the extension action can be locked and unlocked by a twisting movement, some people have found that the way they were applying pressure accidentally unlocked one handle as they pressed down. It took them a few tries to get a feel for how sensitive the locks were and which directions would set them loose, and they managed in good time, but it’s still worth noting.

Rather than trying to reach up high or far past yourself, are you just trying to get the best trim you can on the twigs and branches of some small bushes right in front of you? Then you might have a better time with these bypass loppers fromFiskars. Rather than having extendable handles, these loppers are static and meant for power and accuracy instead of reach. Their precision blade is made from hardened steel, as are the handles, and the blade is coated with a low friction finish for extra strength. Both the blade and handles are rust-resistant. The handles give you 28″ of reach and feature from handles for your comfort.

Although it seems to be the exception and not the rule regarding this overall design, some units from this line of the brand have been sent with a weak welding point where the blade is anchored into the handle. As a result, the handle snapped off from the blade on one side quite quickly after receipt within the first few uses. Customer service was helpful in replacements, but it’s certainly something to be aware of in checking your new gear over when you open it.

If you’re still interested in telescoping handles and an anvil-style blade, but you’re also looking for something a little more heavy-duty than you’ve seen so far, then Spear & Jackson might have just the model for you. The upper blade on these loppers, which is the one that gives them power, is made from Sk5 carbon steel, which is notorious for keeping both durability and sharpness. This blade, as well as the handles and hinges, are also PTFE coated for rust resistance but using a low friction solution that doesn’t interrupt the loppers’ smooth action. The telescopic handles are tubular (or hollow) to make them lightweight but made from hardened aluminum, so they don’t lack durability. They have smoothed foam caps on the end to make them non-slip and comfortable. The loppers feature a locking mechanism that holds them closed for safe storage, especially if you have kids at home.

Because these loppers are designed with a wide gape, meaning that the blade opens very widely, some people with less experience or those looking to trim smaller branches found them a little awkward to work. The bladeswill open to a smaller gape, but they’re built with such smooth action that they tend to just spring open automatically when you widen the handles after the cut, resulting in you having to carefully narrow them again before placing them and then pressing them to cut. It’s possible to get them working just fine despite this, but it takes some practice so that you learn their sensitivities; they definitely come with a learning curve. 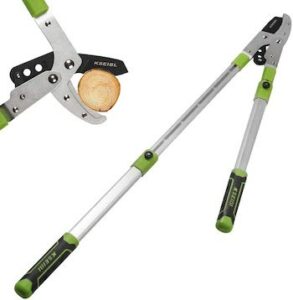 Are you quite interested indeed by the idea of an anvil lopper with telescopic handles, but you’re also the kind of shopper who likes to see more than one brand’s version of a design before you choose one? Then check out this alternative from KSEIBI. These loppers have a gaping width that can handle cutting branches up to 2″ in diameter and do so quite easily thanks to a hardened steel blade that was three times fully heat treated. The tubular aluminum telescopic handles extend up to an impressive 40″ but remain lightweight. The loppers come with a detailed repair and home care guide as well, giving you all kinds of cleaning and maintenance tips and tricks that will help you protect them from damage and make them last as long as possible.

These next loppers arenot extendable because they’re designed for closer-by trimming and aim accuracy, butFiskarsdoes let you select from three different static handle lengths (for varied but reasonable prices). The crossing action of the blades and handles lets you power through branches up to up to 1.75″ thick without undue effort on your part. The blade is made from fully hardened steel that was treated for smooth, low friction cutting and rust resistance. The handles, meanwhile, have a soft rubber grip on the end of each, giving you a non-slip hold while you work. The cutters also come with a lifetime warranty.

Although the rounded head of these loppers was intended for a non-catch experience in navigating them between branches to get to the one you want to cut, some people found a flaw in its practicality. The rounded shape makes the end longer since there’s no real tip, so some people ended up catching the edge on the branch they selected rather than those around it. To avoid this, they had to open the loppers as wide as they would go each and every time to maneuver the branch between them. They managed eventually, but it’s reported to be quite a learning curve. 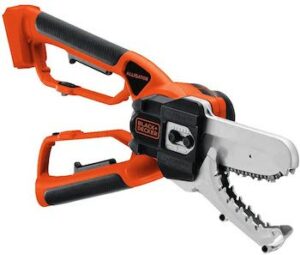 Does the trimming project you had in mind actually require a little more power than any human is capable of applying with the own arms and energy, even though it’s a smaller, easier-to-do job? Then these Alligator loppers from Black + Decker might be just what you’re looking for. This battery-powered, handheld cutter works like a miniature chainsaw in the cutter’s top jaw to grind through hard branches. The bottom jaw, on the other hand, catches the saw for stabilization and also grips the branch to hold it in place during cutting. The tool is charged by a 20V MAX lithium-ion battery that is pretty standard, meaning it can be easily swapped with that of other power tools if you lose power before you’ve finished the job. The battery is designed to give you about 150 cuts of branches up to 1.5″ thick per charge.

The biggest problem reported with this unit by previous buyers wasn’t actually with its cutting action, which has been quite well regarded. The most common difficulty actually appears to be with the chain’s oiling process. Firstly, the squeezing device provided for applying the lubing solution to the chain is reportedly extremely hard to squeeze, and its tip is also rather difficult to aim accurately. Most people confessed to using a sort of “squirt blind, hope for the best, and clean the garage floor up after” approach.

Are you still feeling keen on a strong bypass lopper, but you want steady, static handles that are all one piece? Then you might get along best with this simplified model from Corona. The blades and handles alike are made of forged compact steel that will keep its sharpening well and stand up to essentially any pressure you can manually apply. The static handles give you 32″ of reach and feature smoothed rubber handles on the ends for non-slip grip and comfort. The curved shape of the blade rolls down onto the top of the branch, giving it an advantage in cutting and making the process a little smoother than blades with less curve provide. The blade also has a wide gape to fit larger than standard branches between the sides.

Although the loppers are absolutely capable of taking on very thick branches, some people found that the amount of manual power you’re required to put into the handles to close the blades was almost too much. It’s not so much that the blades aren’t capable of quick cuts, but rather that the very straight nature of the handles requires a very direct force of pressure to transfer it to the blades at the top, which is a squeezing action some people find a little difficult.

Who should use loppers?

In reality, any person who has trees and bushes in their yard or on their land plot can benefit from owning their own loppers. It’s also true, however, that it takes a certain measure of strength, mobility, and patience to use them properly and safely. Loppers can be weighty, if not outright heavy, depending on the kind and size you buy, and they also feature blades that are sharp enough to cut through tree branches and thick twigs. People who can and should use loppers are:

Do you know another yard care enthusiast who has been thinking about investing in their first or a new, lopper but they’re having trouble making the final choice? Share this post with them to give them a hand in choosing.