Buying the right tropical plant for your outdoor space is really worth every buck. Don’t agree? Well, let’s first check this Peperomia variety out, and maybe you could ultimately settle any misgivings you might have towards adopting a perennial plant in your garden.

Featuring a fancy dark-green print on the leaves, the Watermelon Peperomia stands in as an artful houseplant you won’t regret owning for. 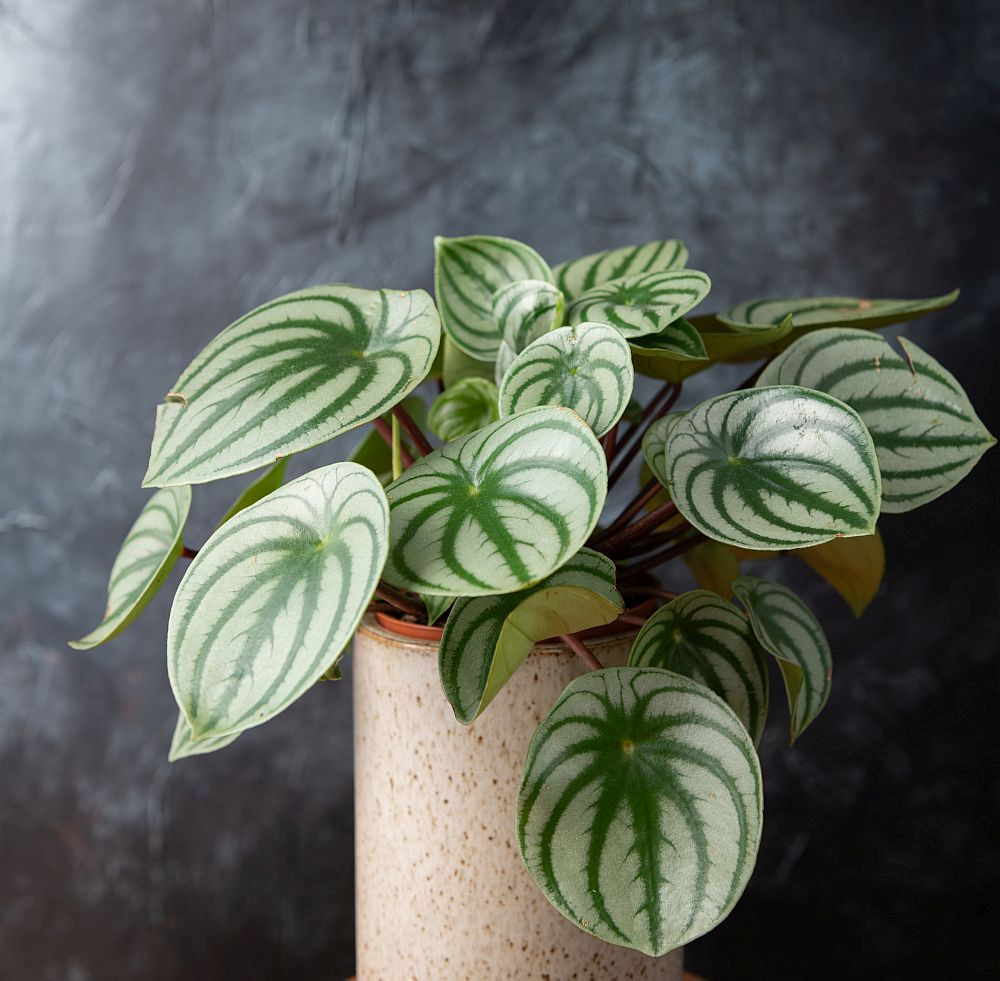 The real scientific name of this perennial plant is Peperomia argyreia. It comes from the tropical parts of South America, particularly Brazil, and it’s dubbed this name because the patterns on the leaves resemble those on an actual watermelon rind.

About the Watermelon Peperomia

This herbaceous perennial is one of the most frequently purchased varieties in the Peperomia genus.

It’s a slow-growing plant with the potential to reach up to 6-8 inches tall when it reaches its maturity stage.

Most homeowners fall for this plant because of its fancy leaves that have a cocktail or dark-green and silver stripes on the outer surface. 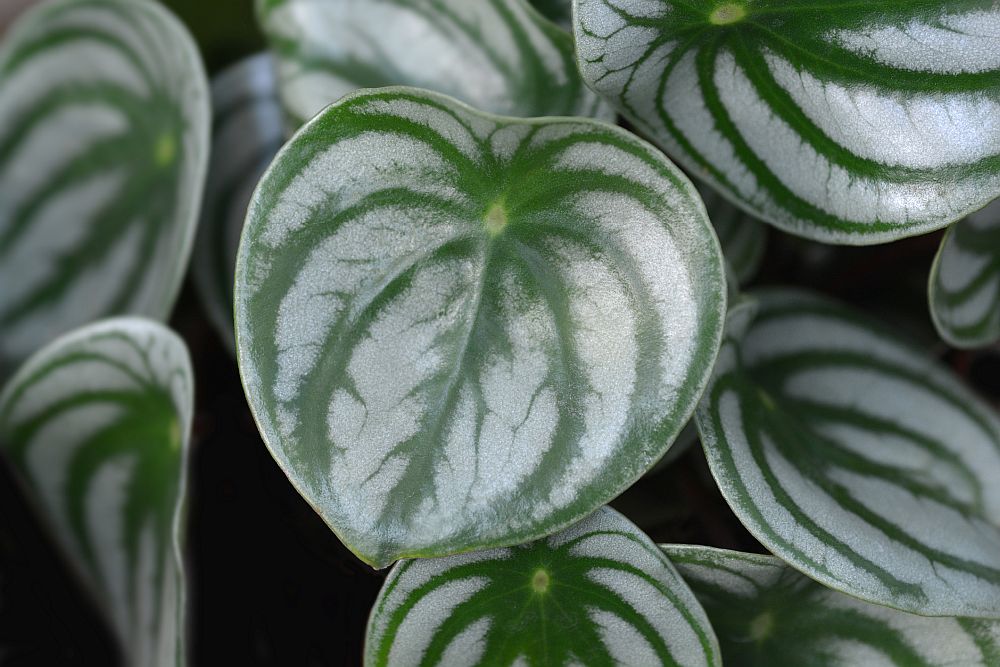 The Watermelon Peperomia grows rapidly in areas with USDA hardiness zones 10 through 12. In most instances, it’s grown indoors using a container that’s big enough to accommodate the plant when it vigorously sprouts.

It’s quite easy to grow your Watermelon Peperomia indoors when you expose it to the most suitable lighting conditions. Ideally, this plant produces dazzling foliage if grown in a well-lit room, but with partial access to sunlight.

While most Peperomia varieties are quite largely fond of bright light, direct rays would cause the leaves of your Watermelon plant to fade and wane, especially during summer and spring, so you want to keep your plant somewhere with filtered light.

They also prefer temperature levels ranging from 18-24 °C. And sadly, temperatures below 10°C could be hurtful to your plant’s wellbeing. 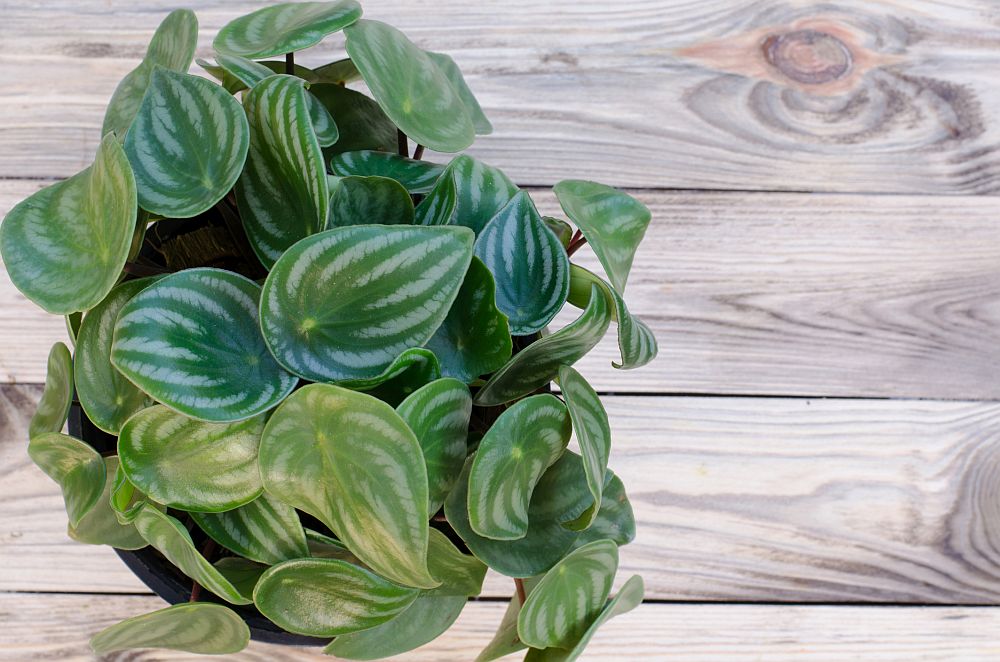 As a tropical plant, there’s no doubt that the Watermelon Peperomia has a soft spot for humid conditions, but you also need to ride on with the fact that it usually gets predisposed to soggy soil which makes the roots to decay. It also makes the leaves to wilt.

During the watering session, make sure the topsoil is evenly wet and wait till it dries out completely, to water your plant again. The drying period would take a couple of days, more so if you’re growing your plant indoors.

If you’re, however, using this Peperomia variety to facelift your landscape, you’d need to inspect the soil each day, mostly during summer. To level up the growth rate, you’ll highly likely be tempted to use fertilizer, I would take a wild guess.

I’ve tried using fertilizer on my succulents and other tropical plants, once too many times, so I get the thrill to see your Peperomia look glaring and healthy each morning.

But before you rush to try using one, here’s the deal—this kind of variety doesn’t need too much of it to bloom throughout the year. Use soluble fertilizer, say, once or twice every month, during summer and spring when the growth hormones are far more active.

When it’s winter, they’re usually numb so you want to lessen the fertilizing intervals—preferably once or twice during the entire cold season. To optimize the growth rate much further, you can also feed the plant with organic compost, which correspondingly makes the soil nutrient-rich.

First, you want to use containers or hanging baskets with enough drainage holes when planting your Watermelon Peperomia.

The soil, on the other hand, needs to be quite permeable so the roots don’t get soaked in water for long since they might begin to rot sooner or later. A potting mix made of peat, perlite, and sand would be an ideal soil structure, especially during the roots sprouting stages.

Just in case this feels like a daunting task to do, you can alternatively opt to purchase the potting mix from your closest gardening retail store. When it’s time to repot your plant, try as much not to use an overly big container. This variety tends to grow evenly and abundantly in a compact setting.

You also need to be extremely careful during the whole transplanting process, to avoid causing any irreparable damage to the roots.

Ideally, you should carry out this exercise during spring and make sure to replace the topsoil around this season, even more so, if you’re growing your Watermelon Peperomia on the ground outdoors, in order to rejuvenate the replenished macronutrients.

By far, this plant is less demanding compared to most other tropical plants when it comes to the grooming and maintenance routine.

All you need to do is quite simple—just pluck off the dead leaves from the main plant and remove the flowers it blooms up if you’re only after visually-engaging foliage made of evergreen leaves.

And just on a light note, if your plant sits on the windowsill, remember to dust it off using a wet cotton cloth mostly when the temperatures hit a record high. 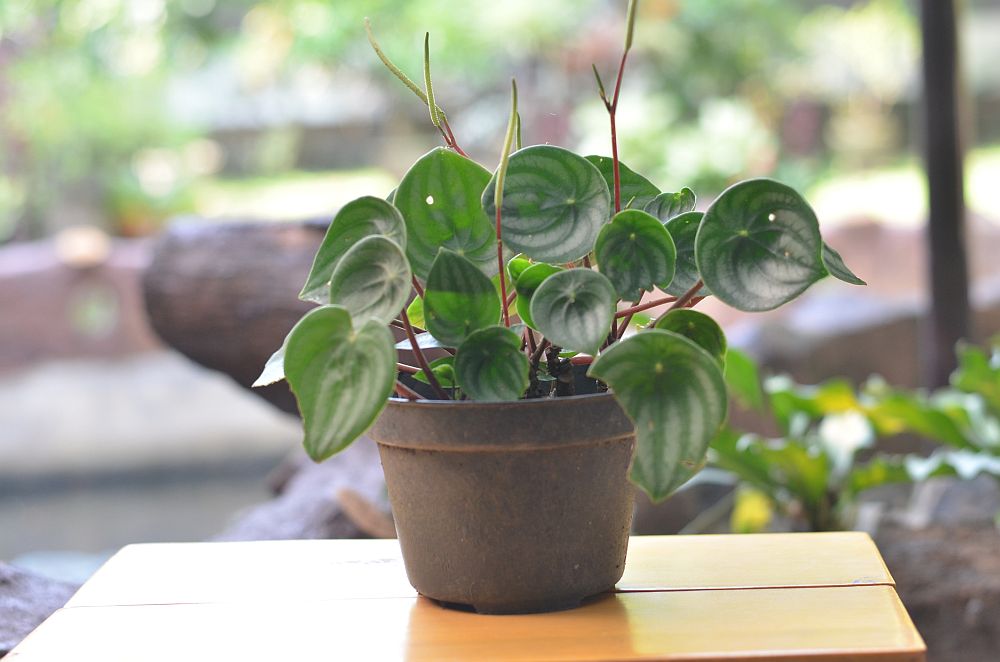 How to Propagate Your Watermelon Peperomia

Even if this is your first time adopting a houseplant, propagating your Peperomia wouldn’t really be a hard thing to hack. And eventually, you’ll almost certainly be hit with a staggering inspiration to grow a couple more of this variety in your garden, so knowing how to propagate your Watermelon Peperomia is practically essential.

To get started on propagating Peperomia argyreia, you need to; 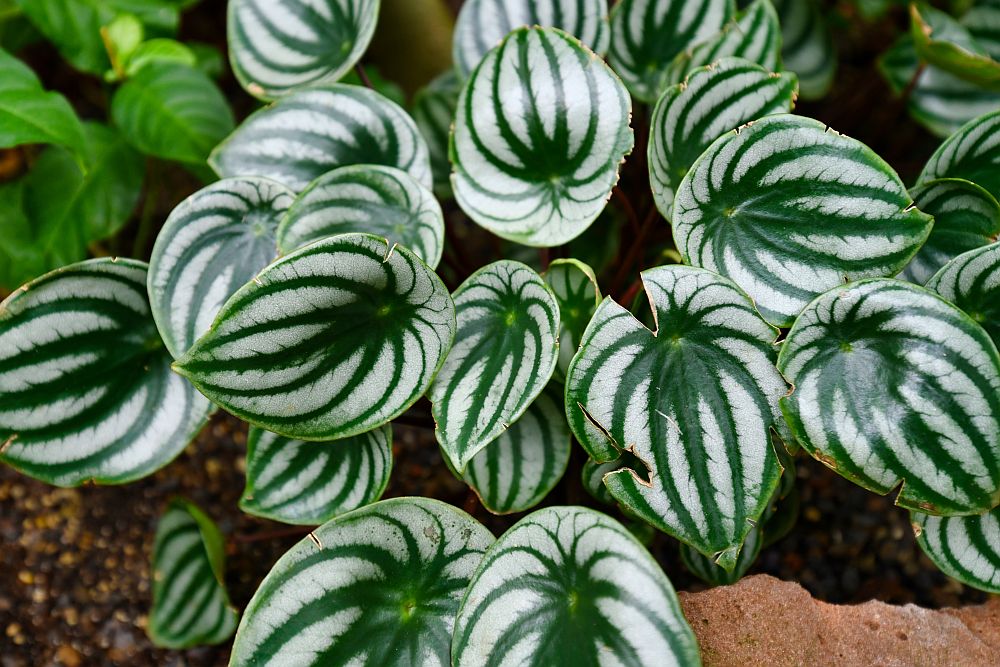 Common Pests & Diseases to Deal With

Most of the time, the Watermelon Peperomia stays fit and doesn’t easily catch serious diseases or struggle with bulky pest attacks. If your plant lacks the needed essentials to keep it strong and hardy all year long, it would be prone to spider mite and mealybug attacks every quite often, especially during the warm seasons.

Giving your Watermelon Peperomia the right amount of water, air, light, and humidity would help it stay far from the frequent pests and diseases you’d have to deal with if the growing conditions aren’t tenable enough to keep the plant healthy and sturdy quite consistently.

You can purchase this Peperomia variety from commercial gardening stores nearby, or opt to propagate it using seeds.

In most scenarios, this plant suits the garden space or sidewalks, since it’s a tropical perennial from South America and mutates much quicker and better in the ground outdoors than in a hanging basket on the wall of your apartment’s balcony. But that’s not to say it can’t look awesome indoors as well.

All you need to do if you’re growing it as a houseplant is give it bright, filtered light, a warm surrounding temperature, together with the right humidity levels. 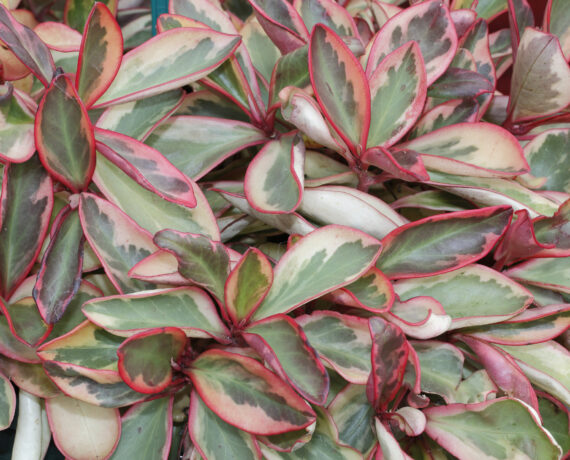 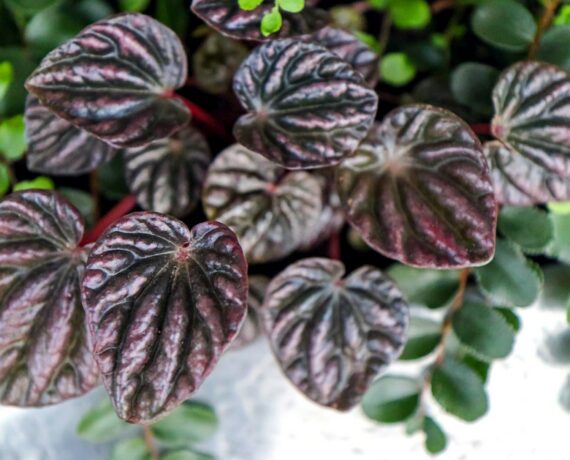 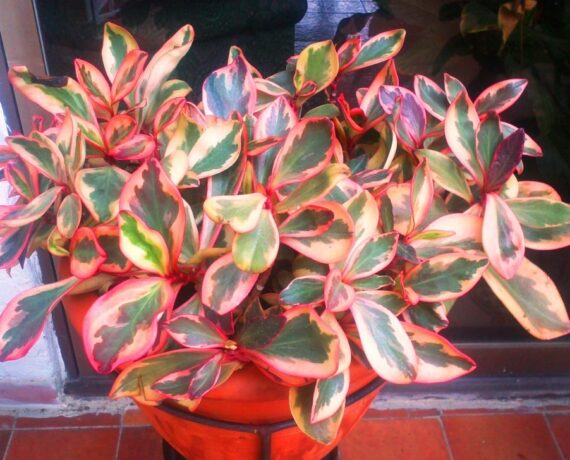 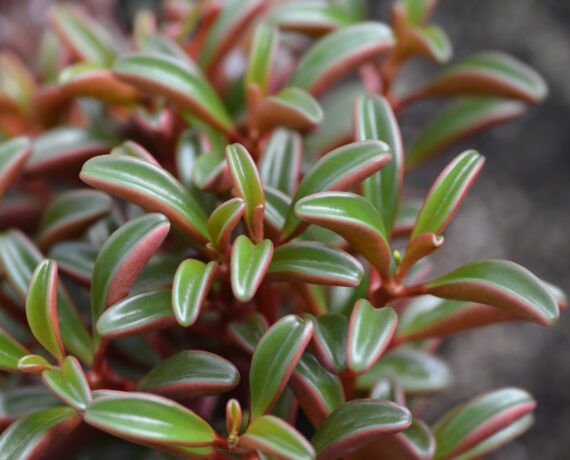 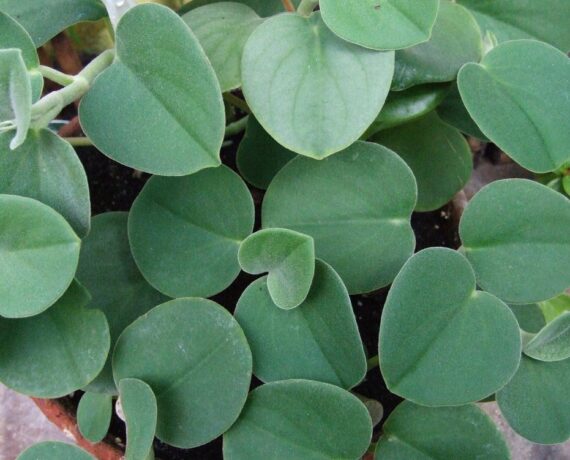