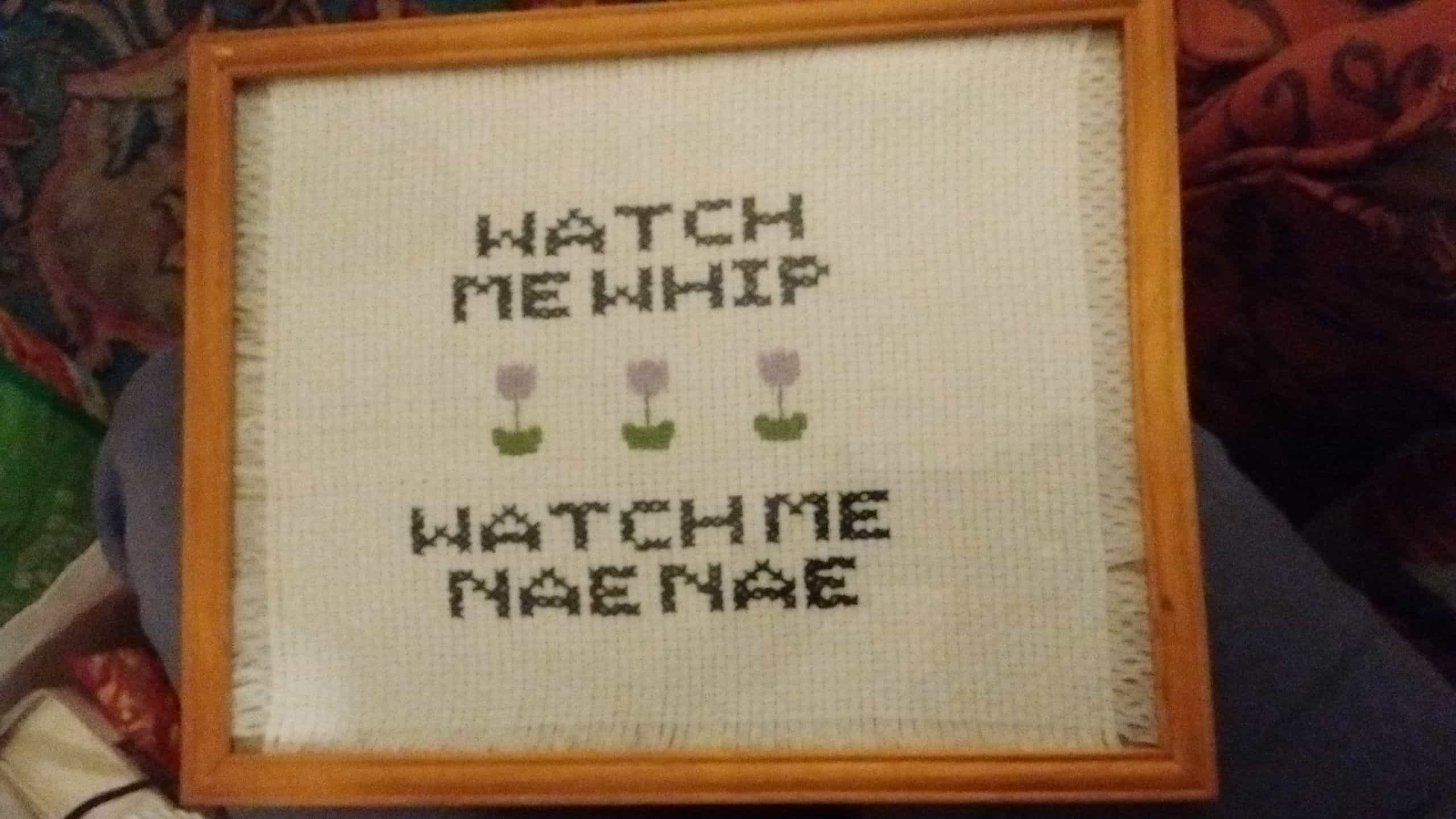 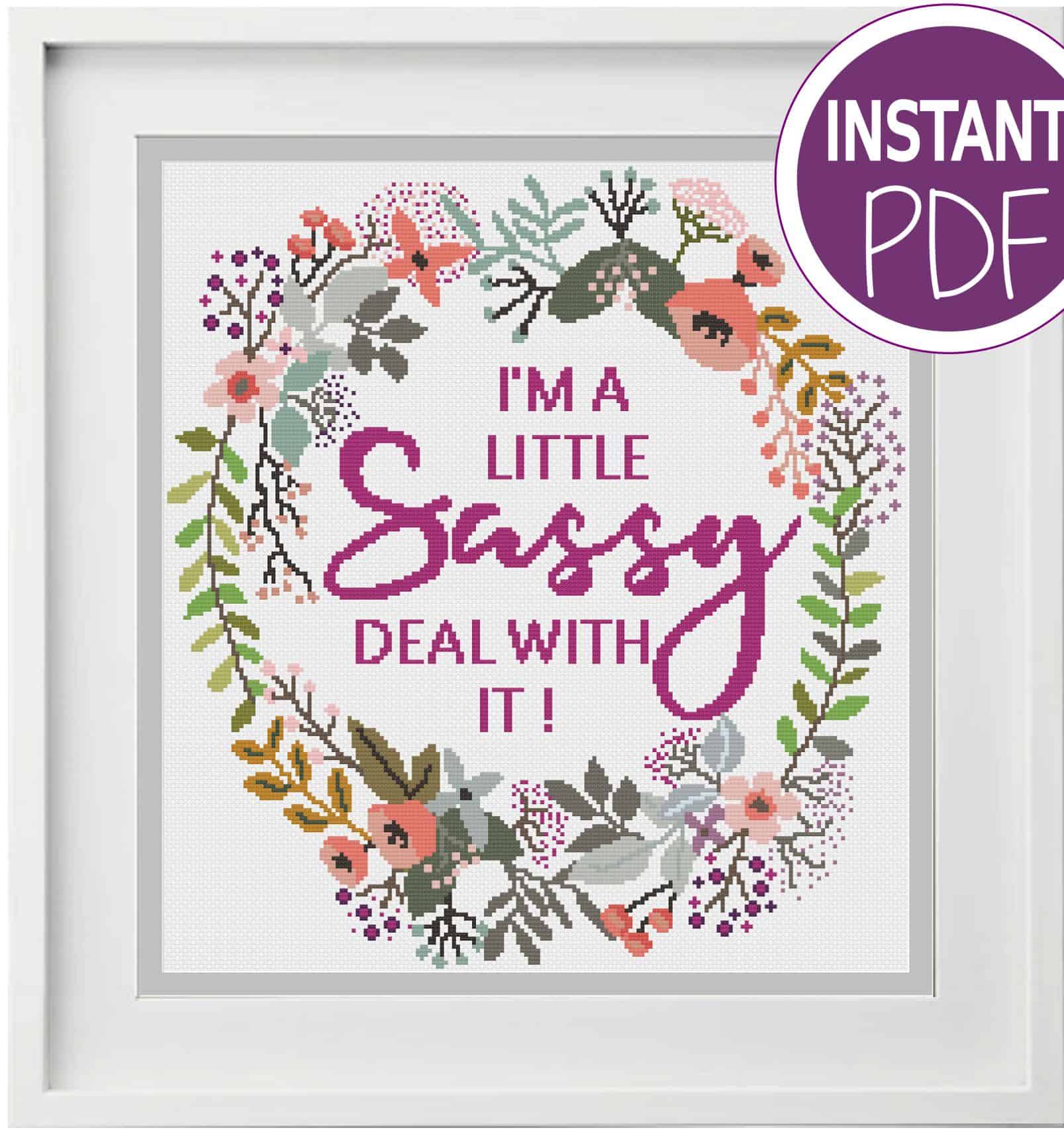 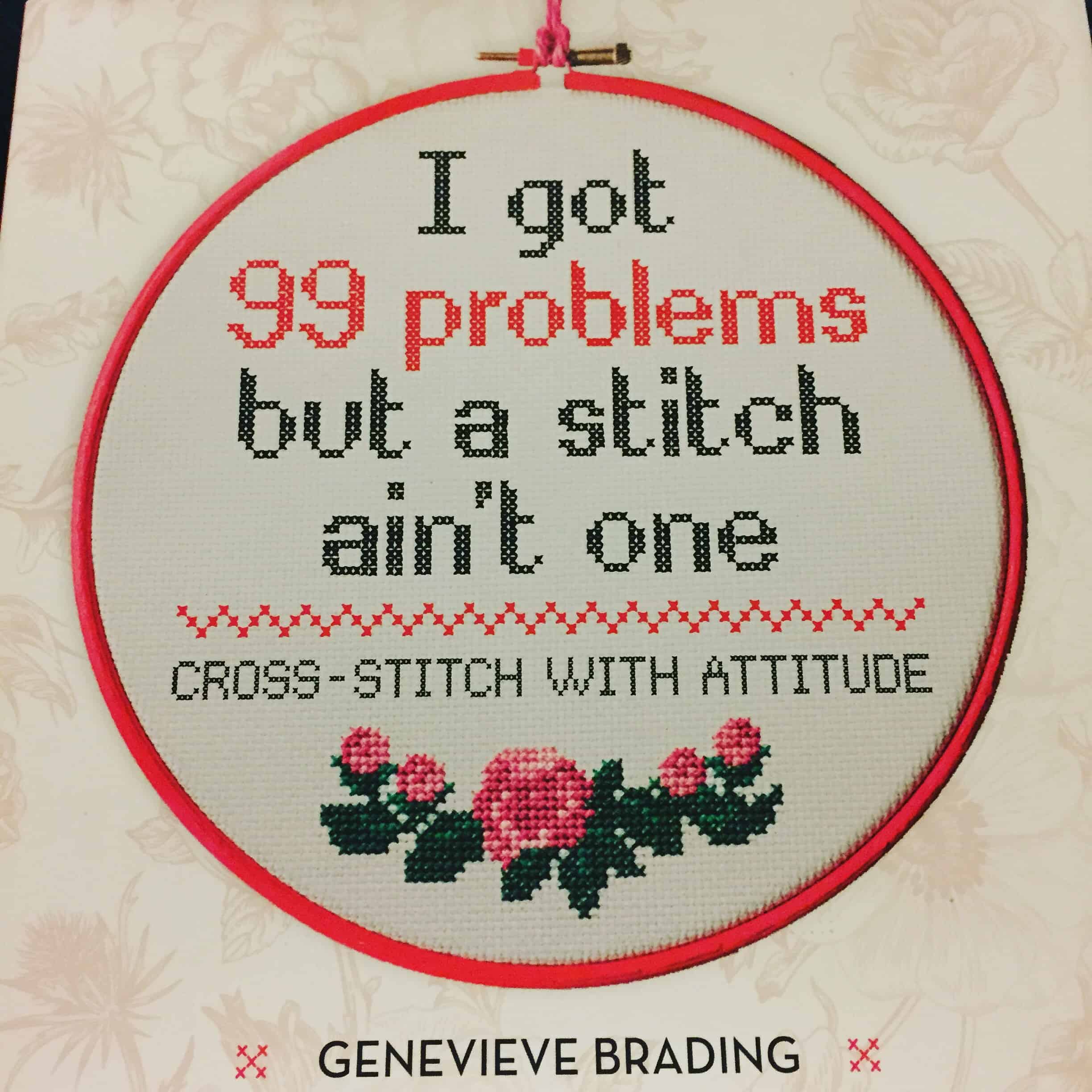 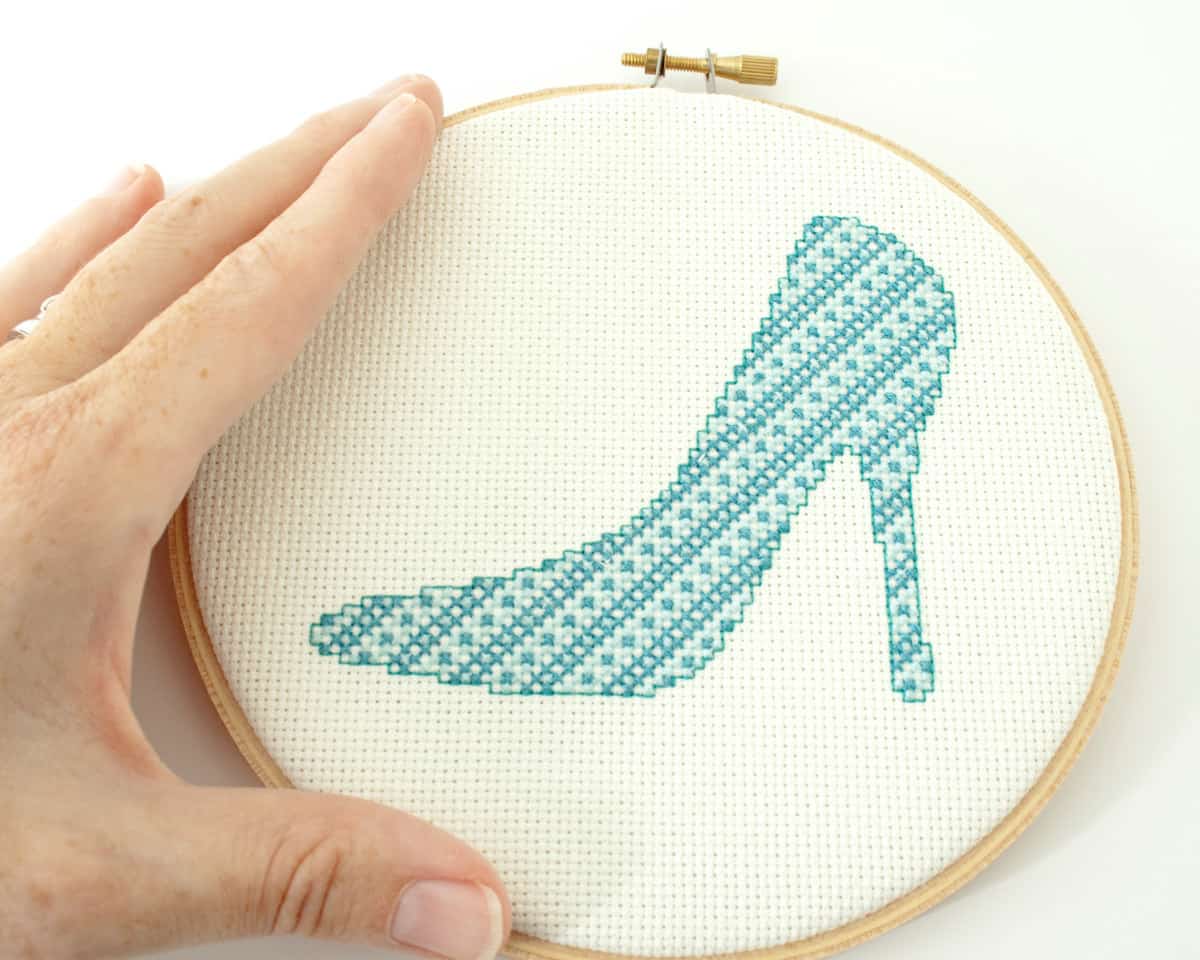 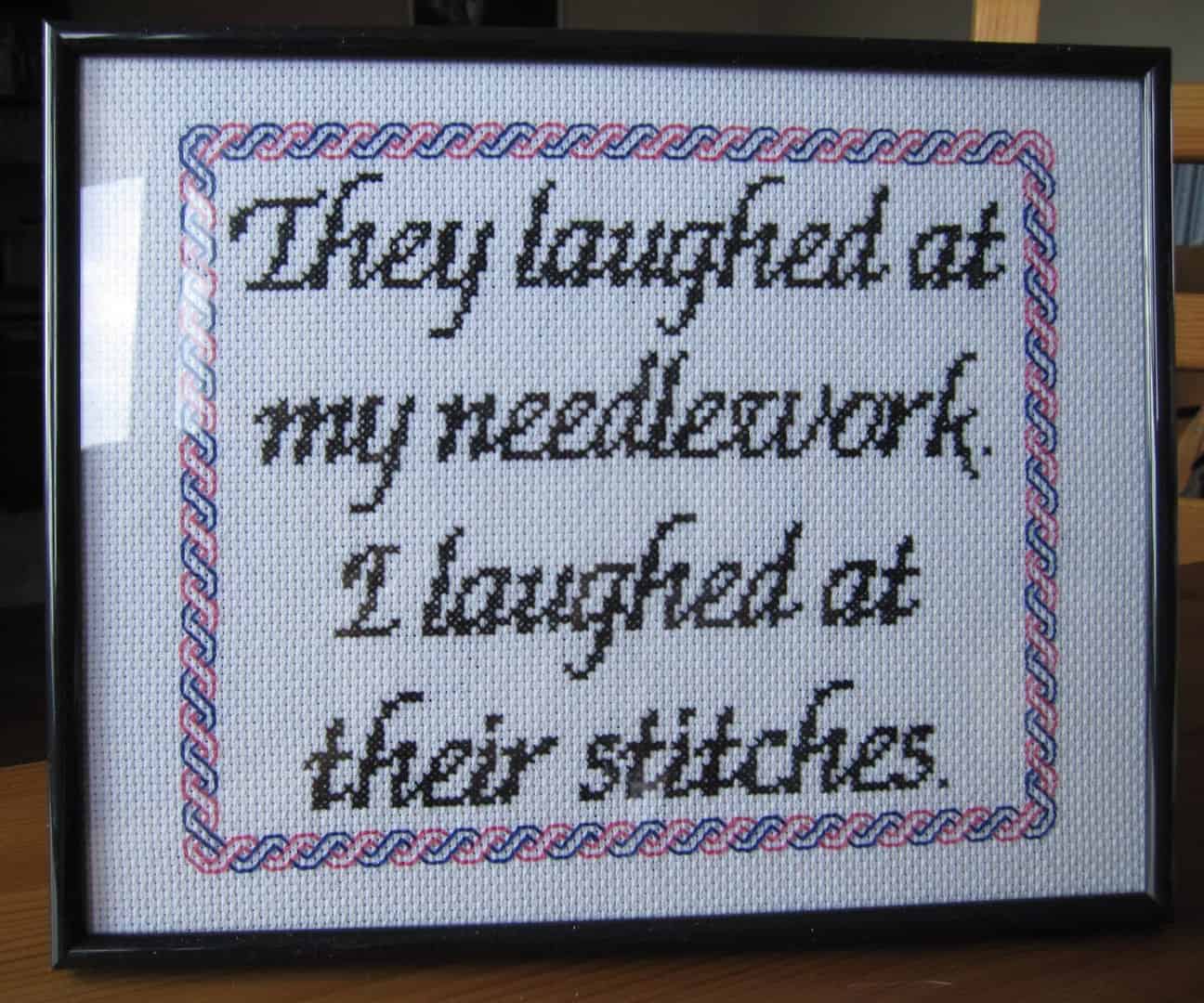 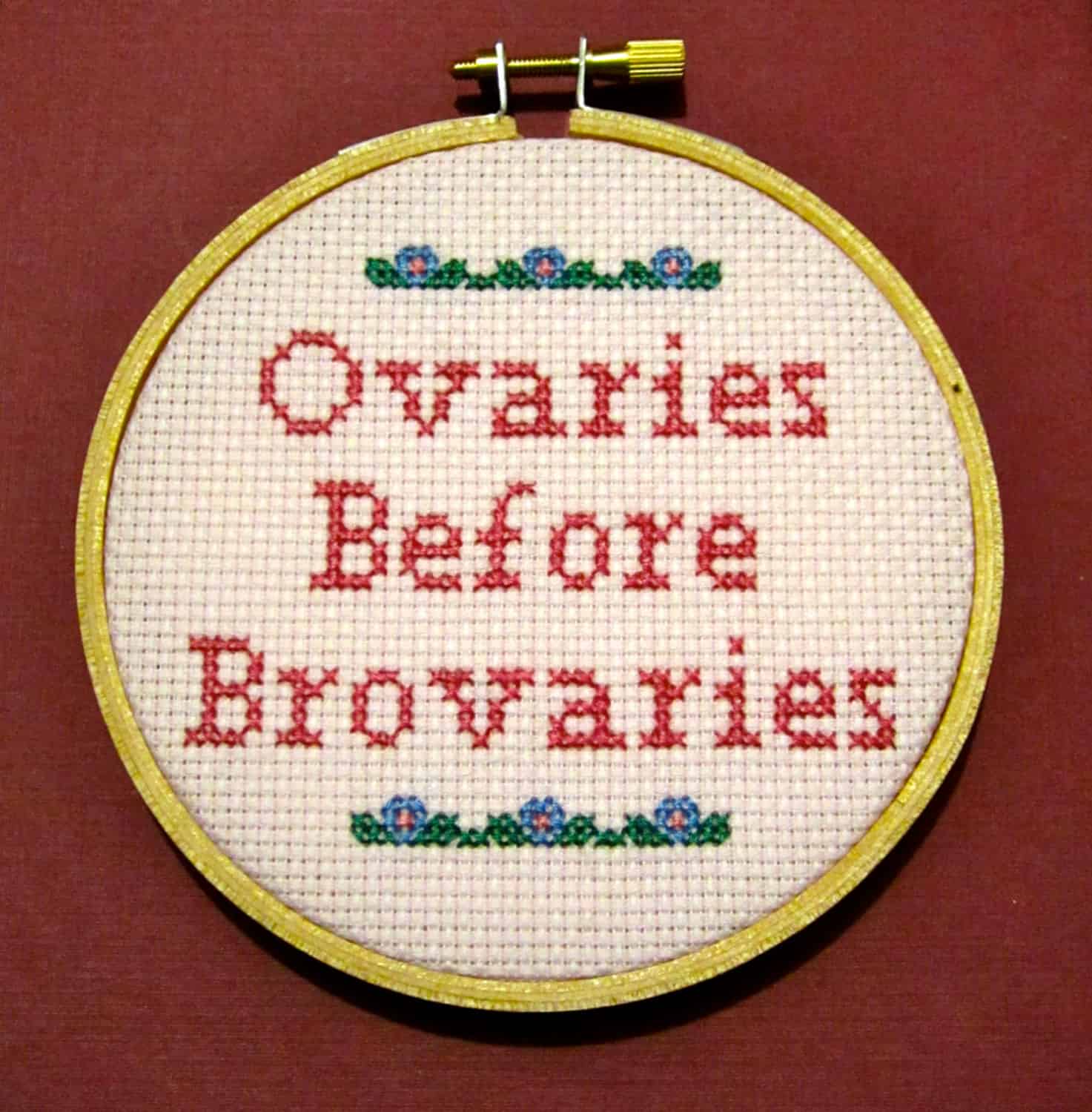 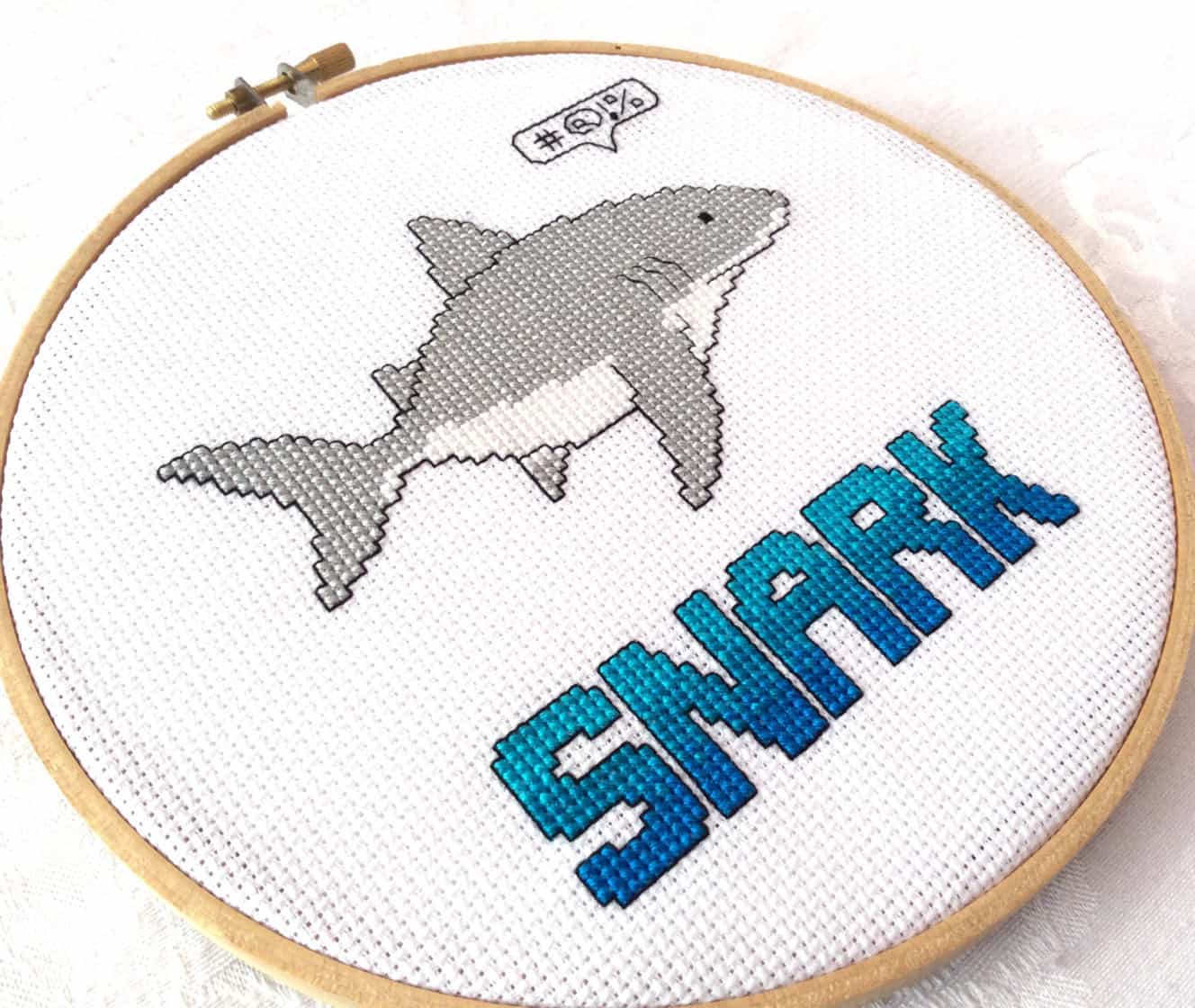 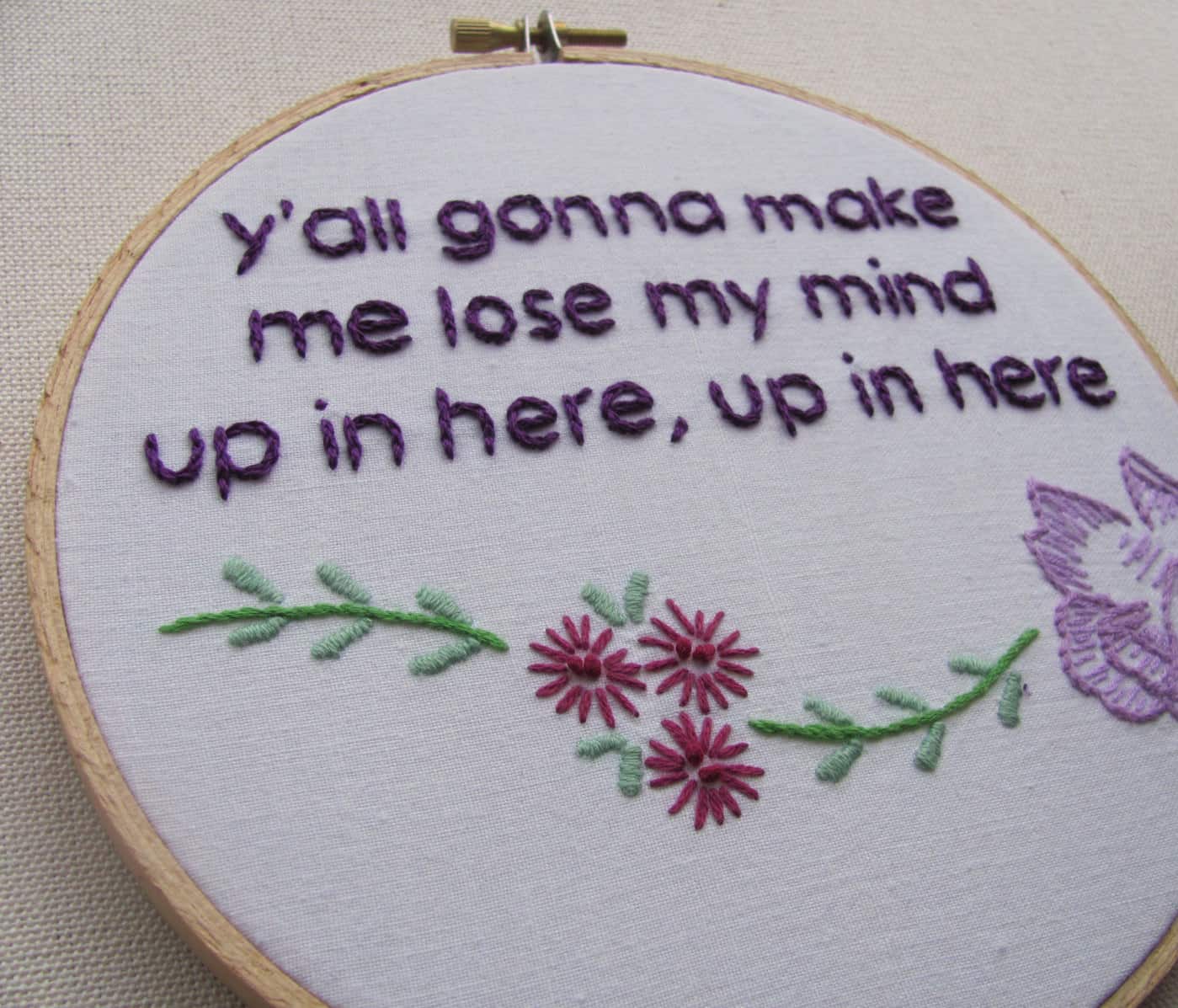 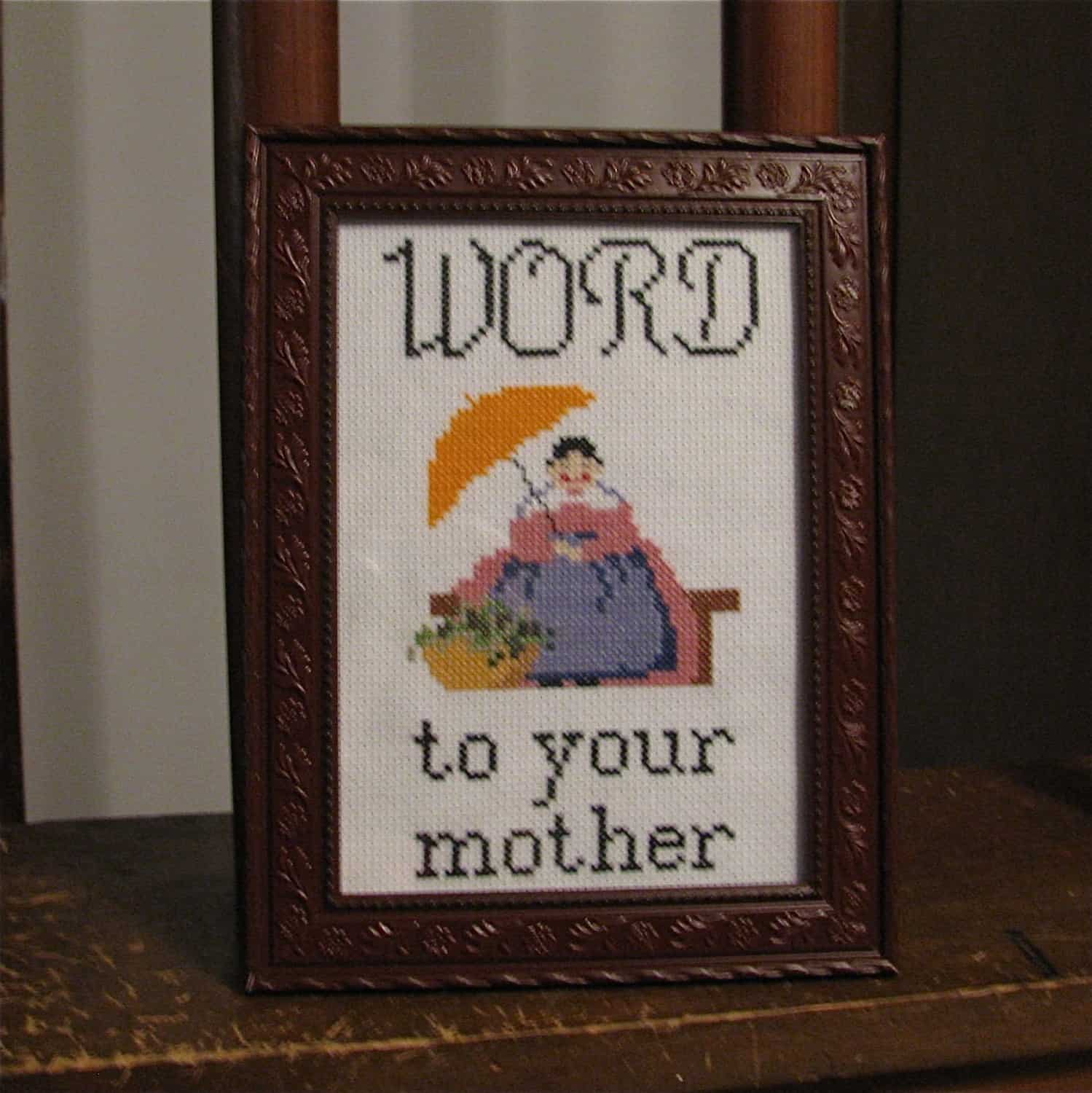 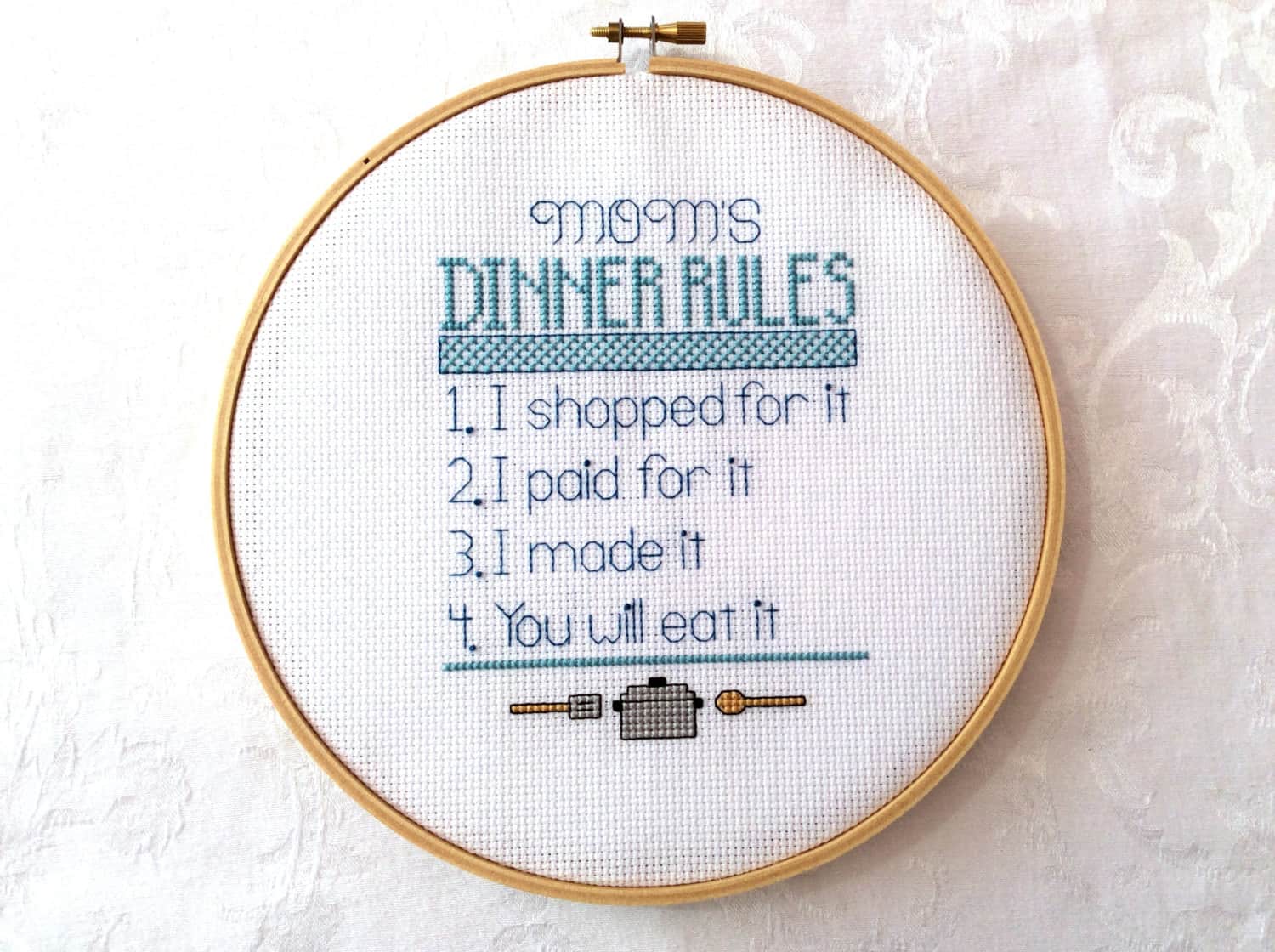 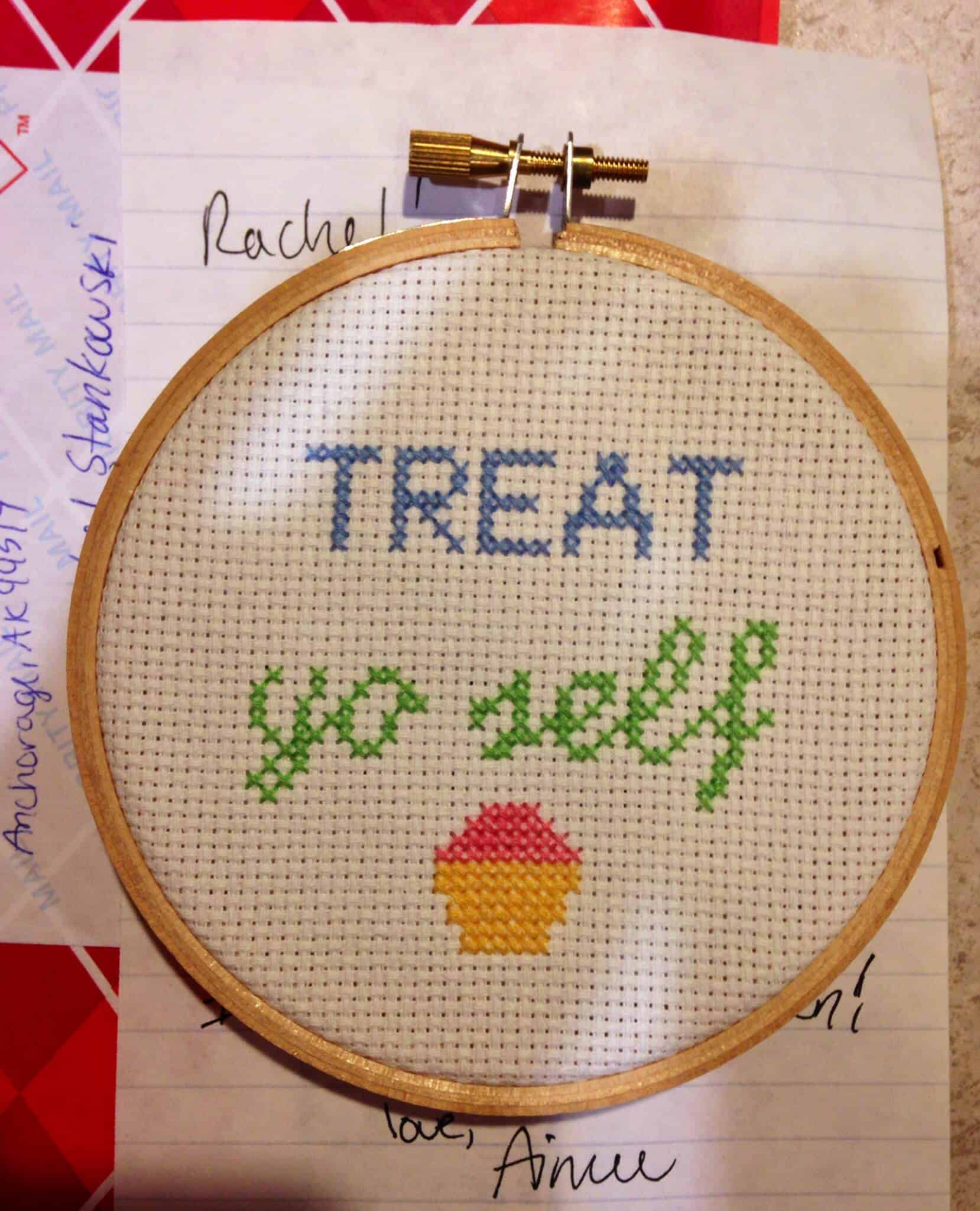 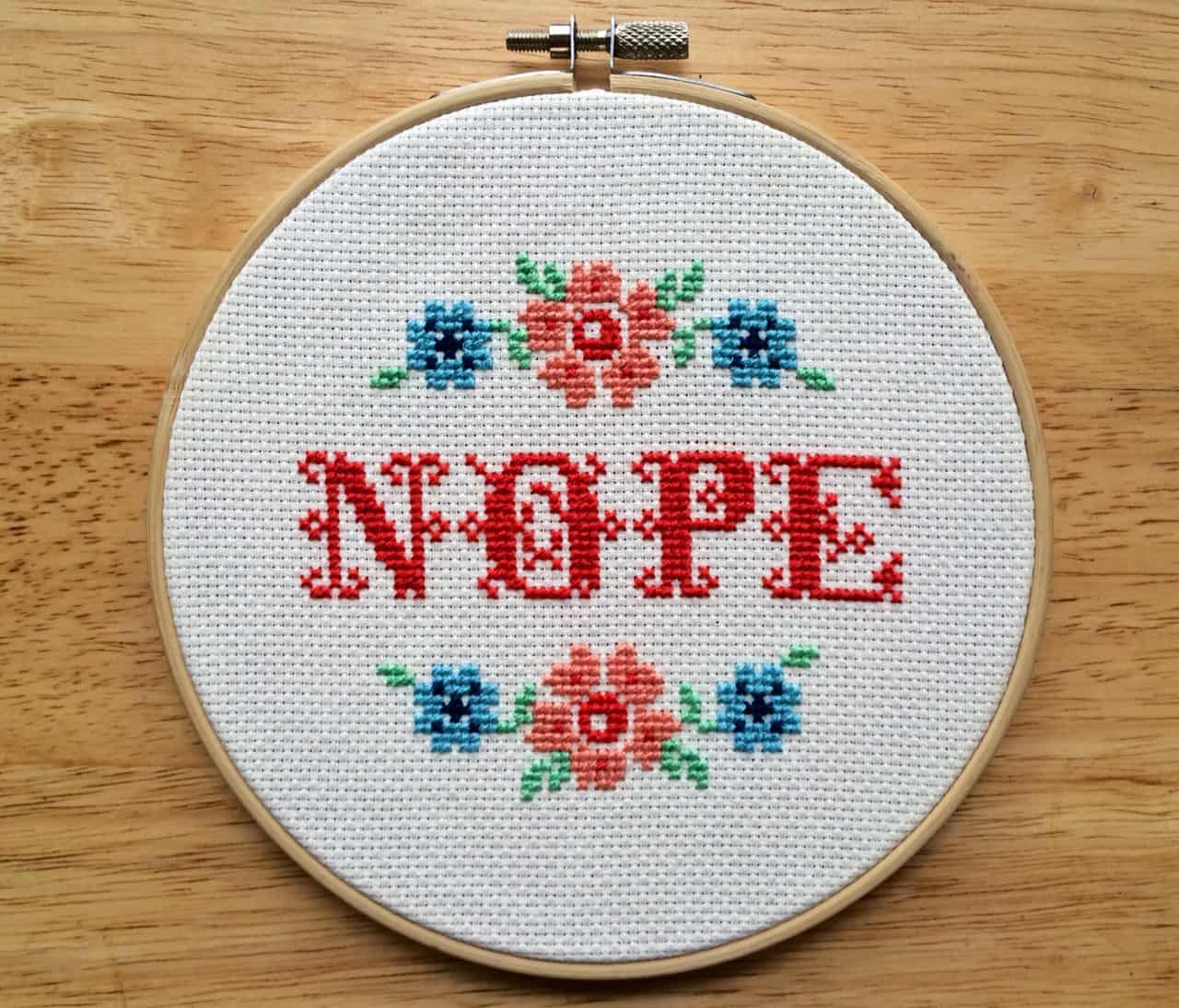 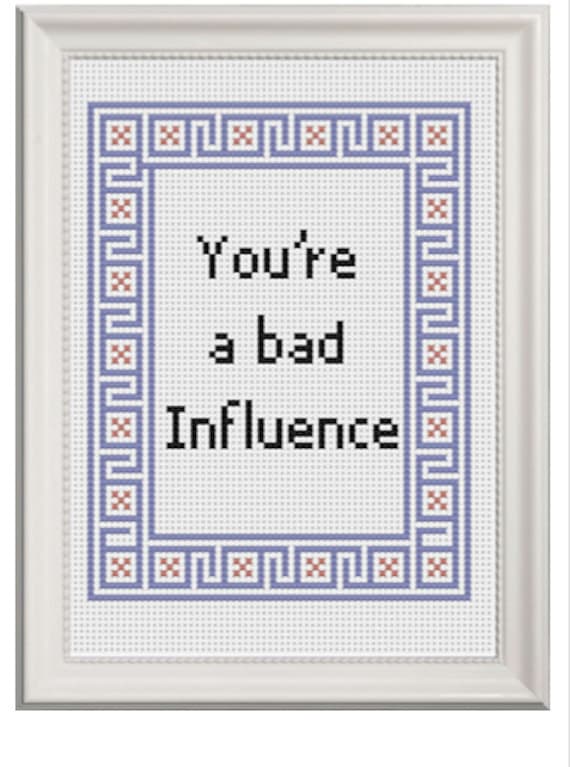 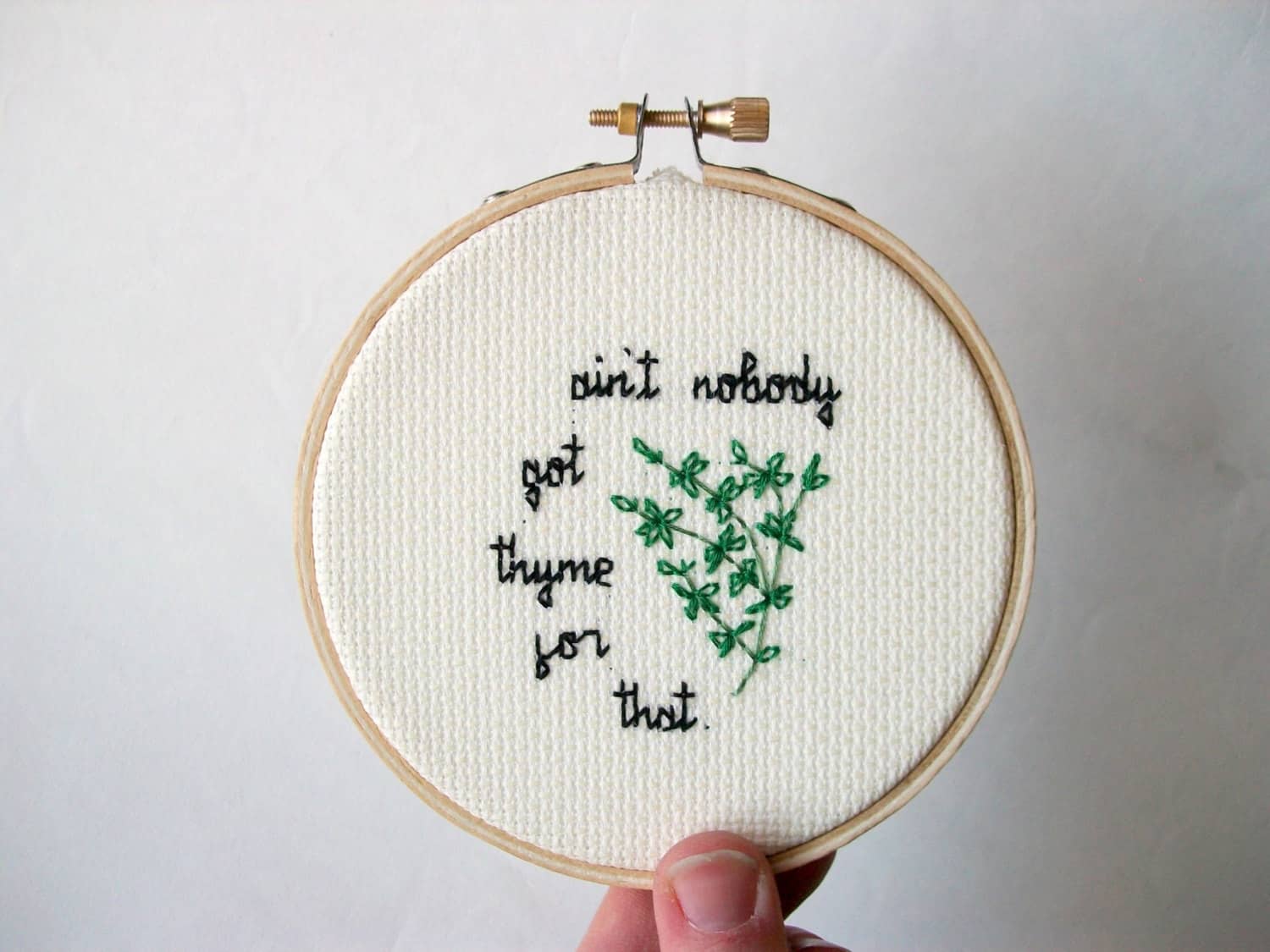 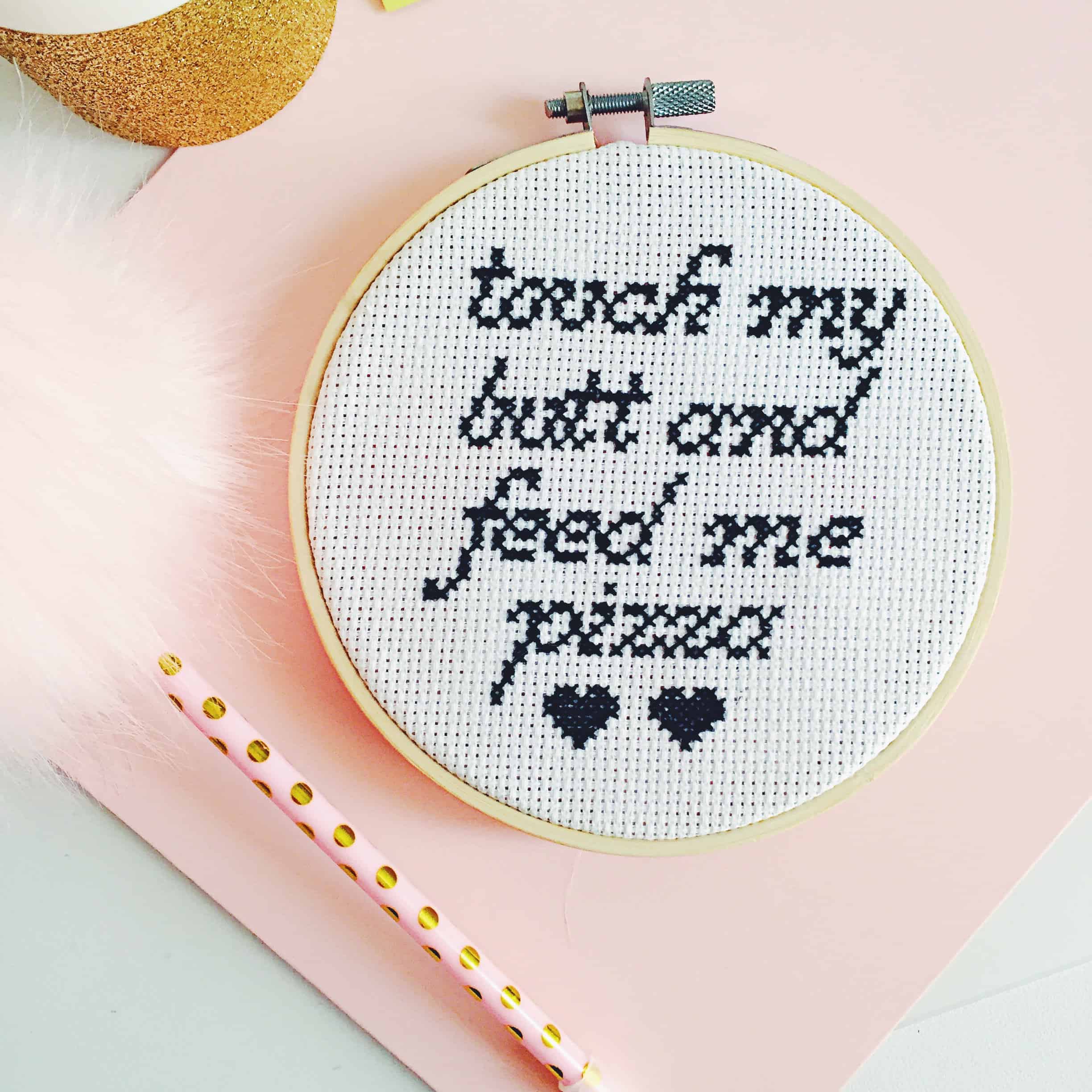 We originally learned to cross stitch when we were very young and since then we’ve tried just about every different kind of pattern and design we can get our hands on. We’ve made simple designs, baby designs, very complicated and intricate designs with many colours, and we’ve definitely done our fair share of lettering too! Each time we make a cross stitch for ourselves or a friend, we frame it so it can be displayed on the wall in a way that looks very traditional and classy. Recently, however, we were introduced to a faction of the cross stitching and needlework world that’s a little more contemporary and, frankly, downright hilarious. People have started knitting cross stitch patterns and sayings that feature rap lyrics, sassy quotes, and funny sayings and giving them as gifts rather than more traditional patterns. At first we weren’t sure that doing a silly cross stitch design would really hold our attention but then we started looking for patterns and found some that were so cute, kitschy, and weird that they totally changed our mind about the sassy cross stitch movement and got us completely on board.

Just in case you’re as curious as we were when we first started looking at charts and patterns, here are 15 funny sassy cross stitch designs that will give anyone a good chuckle! 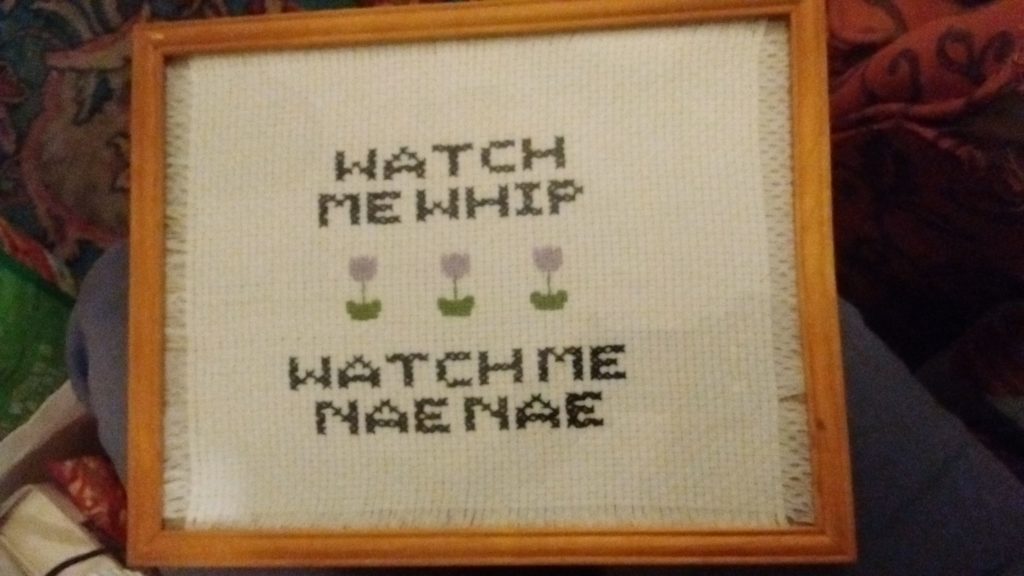 We’re always amused when new novelty dance moves take the Internet by storm because the supply of funny viral videos sweeping across our social networks always makes us laugh. Dance moves might not seem like the first thing you’d relate back to needlepoint or cross stitching, but Whip Stitch Designs still found a way! We love the whimsy of accompanying the dance’s song lyrics with a few delicate tulips.

If you’re going to be sassy or give a sassy friend a funny gift, would you prefer to be a bit more overt about it? After all, not everyone who visits will necessarily be up to date on funny Internet trends to really understand a cross stitch with a pop culture reference on it. Instead, check out this amusing pattern from Peppermint Purple that puts the sass right out there for all to see!

Have you been thinking about how funny the idea of needlework rap lyrics is ever since we first mentioned it at the top of this post, but you’re also a fan when it comes to a good pun and you’re not sure which kind of pattern to choose? Well, who said that you have to choose in the first place? We giggled to ourselves for longer than we probably should have when we saw this pattern from Stitch Me Up Becky that alters some Jay-Z lyrics to be about cross stitching.

Are you actually quite new at cross stitching but you’re intent on making something fun and contemporary rather than just another flower or butterfly like the ones you learned on? Well, there are still plenty of sassy little pictures you can choose from to make yourself some contemporary stitching décor if you’re not quite ready to tackle text and wording just yet. This patterned pump from Red Gate Stitchery is the perfect example of what we mean!

5. They laughed at my needlework

Are you scrolling through our ideas still thinking about how much you love the idea of combining your needlework with needlework puns? There’s just something about a good play on words that’s so satisfying and making it into a permanent craft will give you some witty satisfaction every time you see your own work. That’s why we loved this dark humour quote from Instructables!

Over the years, we’ve heard countless versions of the old adage that one should always value their friends over their efforts to get a date. Some of them are philosophical and some of the are downright rude, but mostly the little ditties we’ve come across are just plain amusing. That’s why we liked this “ovaries before brovaries” cross stitch pattern from Bananya Stand so much! It’s an homage to the same idea but it’s silly and amusing without being offensive.

Are you the kind of person who has always awarded bonus points to things for being outright random? Sometimes it’s the décor pieces that make the least sense that are the most amusing for visitors to see or that make the most amusing gifts. This funny little “snark” design, featuring a shark presumably swearing, is the perfect example of what we mean. See the stitch pattern on The Compass Needle!

As you can tell, we’re completely in love with the idea of making needlework patterns that look lovely and classic but actually feature contemporary rap lyrics! This funny little design from Cross Stitch Rap Lyrics (which actually has plenty of the very patterns we can’t get enough of, as you can probably tell by the site title) shows you how to accompany a timeless rap verse with pretty flowers for just a bit of hilarious contrast.

9. Word to your mother

Have you always love character and caricature needlework, making images of little people dressed in traditional or old-timey clothes as they might have worn back when needlepoint was a more widespread and commonly done. This pattern from PurpleHippoStitches originally caught our eye because of the little lady in the middle but the moment we saw the caption and realized the funny contrast between the image and the words, we were in hysterics.

Perhaps you’re actually looking for a cross stitching design that you can make for your own house, but you’ve always loved having and making room specific pieces? Well, there are plenty of designs like that out there, especially for in the kitchen, but this one might be one of our favourites. We have a household of picky eaters, so beyond being sassy, this pattern is actually a helpful reminder when the kids try to argue about eating dinner. Check out the details on The Compass Needle.

If you’ve ever  seen the TV show Parks and Rec, then you’ll already understand why this little “Treat Yo’self” stitch pattern is amusing. If you haven’t, however, then this is still a cute, fun reminder that sometimes treating yourself to something nice is the best way to take care of yourself a little. Find out how both the lettering and the cupcake (you could easily swap this our for another simply charted image, like a high heel or a bottle of nail polish) on Under The Tapestry.

When you reach your sassiest moods, is your particular brand of sass pretty short and sweet? Perhaps you have a friend who is hilariously honest and to the point and who’s attitude you’d like to capture and immortalize because you love them for it? Then we have a feeling you’ll appreciate the stark contrast between these whimsical flowers and classical lettering and the simple, up front statement “Nope”. See how it’s done on Boots and Beads.

Have you been scrolling through this article and actually mostly looking for something hilarious and endearingly sassy to give to a friend or family member who means a lot to you, but who you always mutually give a hard time to in a good way? Then check out how this pattern from Etsy Studio communicates to them how much you appreciate the “influence” they’ve had on your life! We love that it’s such a classy design even though the words are far from serious.

14. Ain’t nobody got thyme for that

Did you really think we were going to end our post without at least one more pun? Why, we couldn’t possibly! We talked earlier about needlework that would go well in the kitchen, so here’s one more witty piece that’s perfect for the wall space above where you cook because it’s got a spice pun that everyone with appreciate, also combine with a funny pop culture reference. Do you remember the viral news clip where the freshly robbed woman boldly stated “Ain’t nobody got time for that”? Well, Alicia Watkins suggests cross stitching this sentence interwoven with some little green leaves and replace the word “time” with the word “thyme”.

15. Touch my butt and feed me pizza

Perhaps you have a crush or significant other who has always appreciated your handmade and DIY abilities and you’d like to give them a little something to remind them of you but also to send a pretty clear message that you care about them? We think some of the best statements of love are the witty ones that don’t take themselves too seriously. That’s why we loved this simple, cute, and to the point cross stitched statement from Innocent Bones! Besides, who doesn’t love pizza?

Do you know a fellow DIY enthusiast who loves to cross stitch and has a sassy attitude? Then they’re the perfect person for you to share this post with, just in case they’d like to make some of these for themselves!

50 Basic Crochet Stitches to Try Next