When it comes to home decorating in the fall and around Halloween time, we’re completely obsessed with the idea of putting pumpkins not just on our porch, but all over our house! There’s just something so classic and comfortable about the idea of setting pumpkins about the place that really gets us feeling the fall spirit. Usually we carve them or leave them whole and natural looking, but lately we’ve been feeling pretty intrigued by the idea of decorating them in other ways. We’re especially interested in how awesome they can look when they’re painted! That’s why we’ve been keeping our eyes peeled for all kinds of cool pumpkin painting tutorials.

If you’re feeling just as intrigued as we are, if not more, by the idea of doing some pumpkin painting this fall but you can’t help feeling like you could use a little help along the way, here’s a list of 15 of the best ideas, designs, and tutorials that we’ve come across so far in our search for inspiration and guidance! 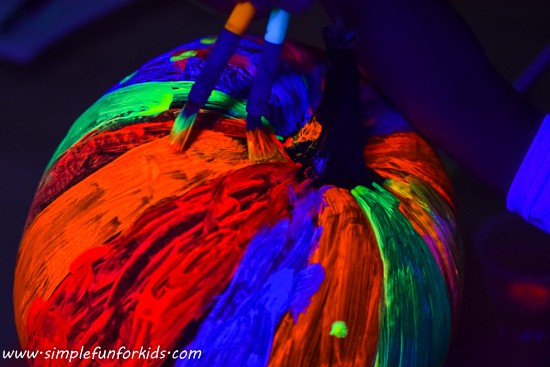 Putting awesomely decorated pumpkins out on your porch is all well and good until the sun sets and no one can see them in the darkness. That’s why the glow of a jack-o-lantern has always been a classic choice, but we know that not everyone wants to work with sharp knives near their little kids. Instead, we’d encourage you to take a look at how Simple Fun for Kids opted to paint their pumpkins using glow in the dark paint that gives a similar but unique spooky glow to your October porch once the sun sets! 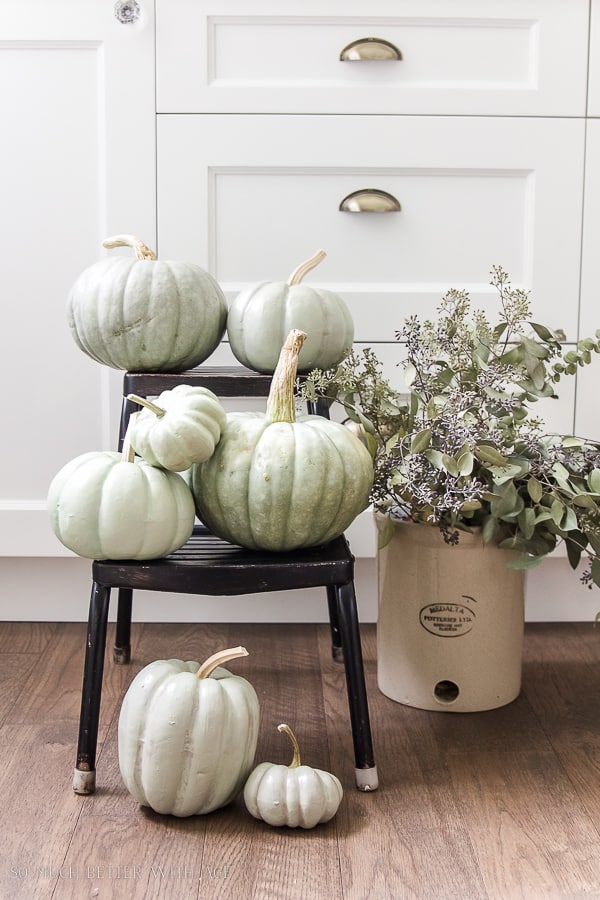 If you’re going to decorate pumpkins for either your home or your porch, would you rather go with look that’s slightly more subtle and suitable to your existing decor scheme, or perhaps just the wider fall season instead of Halloween specifically? In that case, we have a feeling you’ll find these lovely sage green painted pumpkins outlined in simple detail on So Much Better with Age very pleasing indeed. 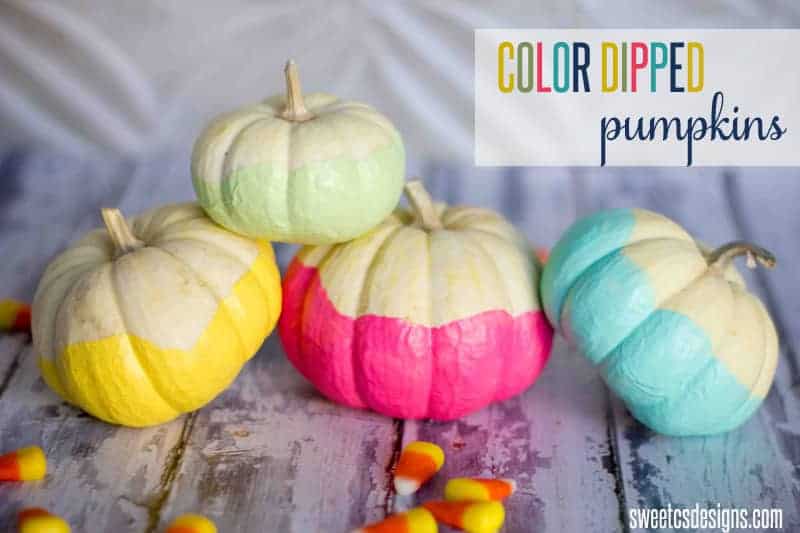 Maybe the pumpkins you purchased are already a nice, light, and quite neutral colour that you appreciate, but you can’t help wondering whether you might add a simple pop of colour to them? Well, you could quite easily just paint one section of the, or you could take a fun leaf out of Sweet C Designs‘ book and do a little bit of paint dipping with their bottom half instead! We love their bright, differently shaded colour blocking effect in the finished product since they made so many. 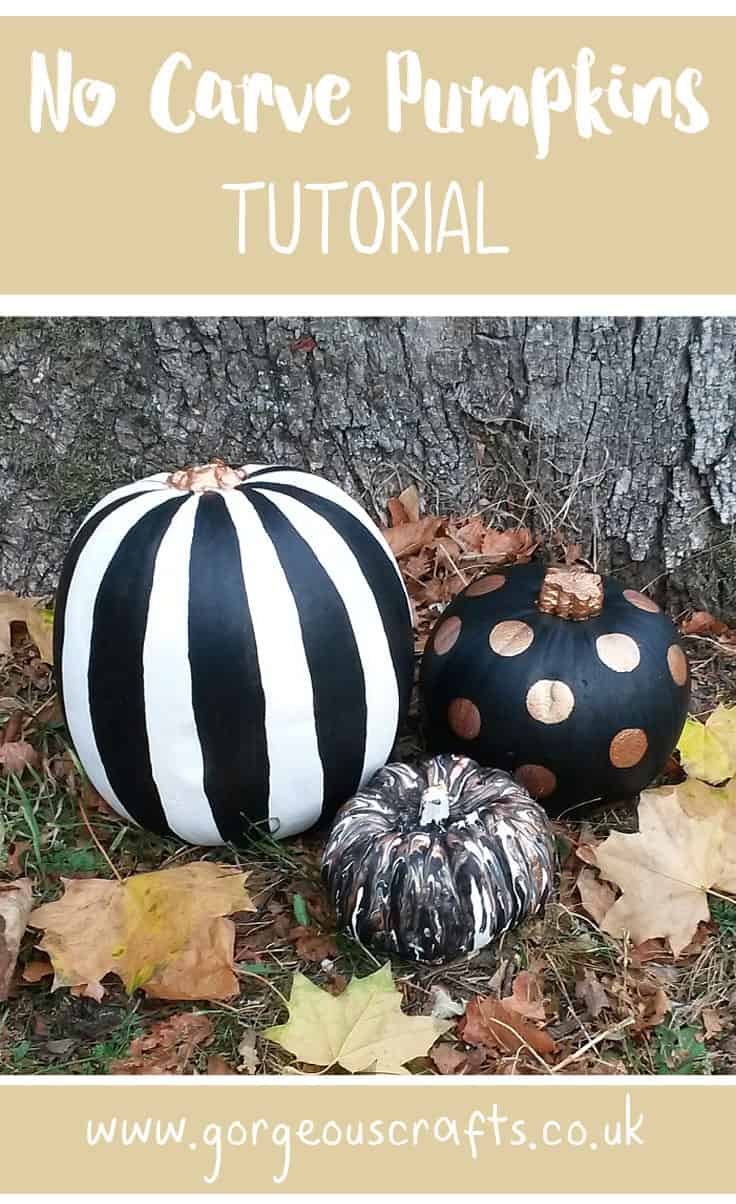 Perhaps you’re actually feeling quite enthusiastic about the idea of painting your pumpkins and you’re open to trying out all different kinds of patterns and visual textures, but you’d also like to pay more seasonal attention the colour scheme, rather than just choosing the same bright blocked colours you might use all year round? In that case, we’d absolutely suggest taking a look at how Gorgeous Crafts painted all kinds of different designs across their pumpkins, all while sticking to a black, white, and gold theme. 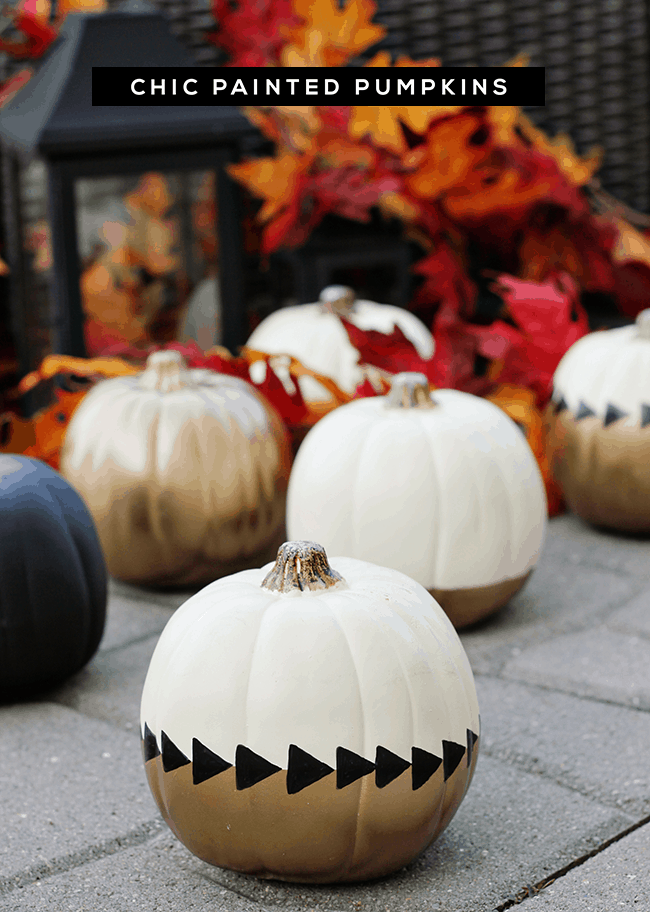 Are you actually a pretty big fan of the idea we showed you above, but you’re hoping to find some help with designs that look a little more chic and decor based than what they put forward? Maybe you’re just of the opinion that a pure white is too stark a contrast in that combination for what your home already looks like. Either way, we think you might have a little more success with something like this black, gold, and cream tutorial from Bubby & Bean. 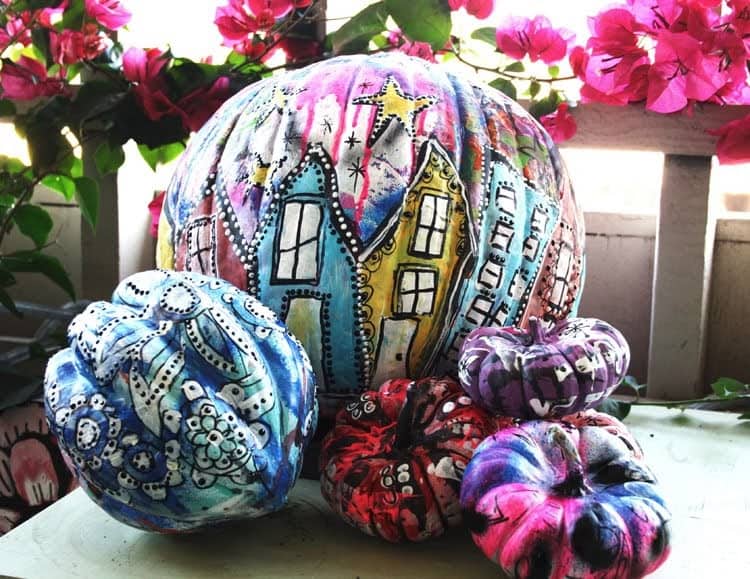 Are you actually quite an enthusiastic hand painter, or perhaps the parent of budding artists, and to you, the idea of painting a pumpkin is just like creating fun visuals on a slightly more unconventional canvas than usual? Then you just might be the perfect person to make something like these brightly coloured and wildly patterned Halloween messy pumpkins outlined step by step on Alisa Burke! 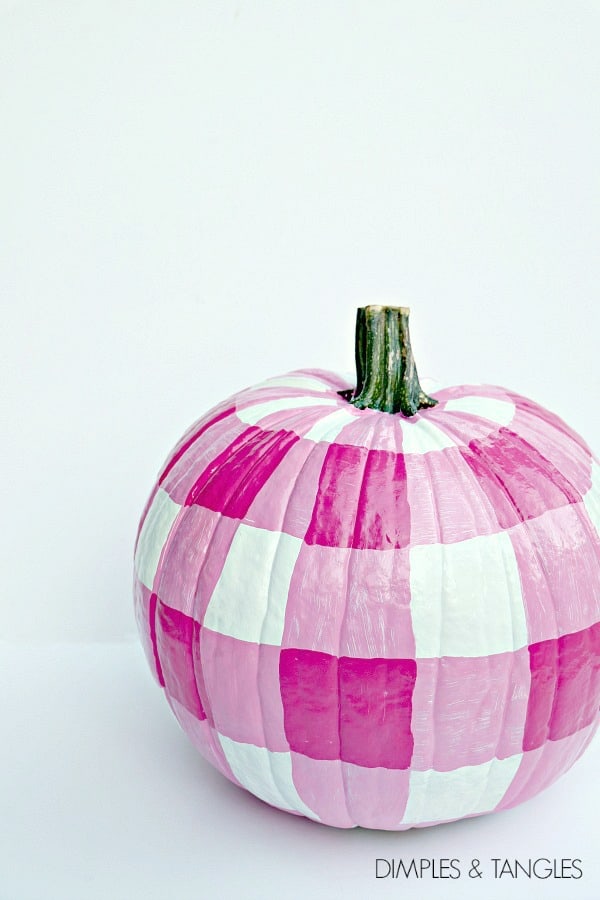 Just in case you’re still in the market for something cute and fall themed but a little more colourful than some suggestions, rather than just a Halloween themed pumpkin design, here’s another suggestion that’s nothing short of adorable! Take a better look at Dimples and Tangles to learn how they carefully colour mixed and hand painted to make these gingham pumpkins. 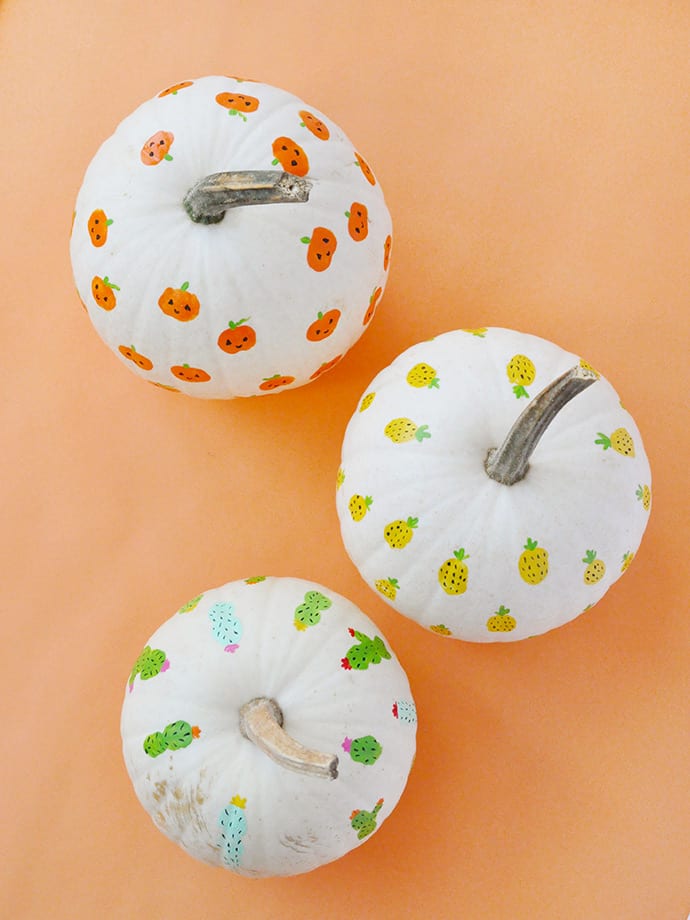 IN your house are the projects that always go over with the most success definitely the ones that involve getting a little more hands-on and messy than usual? In that case, we have a strong feeling that these adorable fingerprint pumpkins outlined on Handmade Charlotte might be just the kind of thing you’re looking for! We love the way they show you how to keep things specifically fall themed with their fingerprint jack-o-lantern design, but also how they show you other fun, randomly patterned options, like pineapples and cacti.

9. A step by step guide to painting Jack-o-lanterns 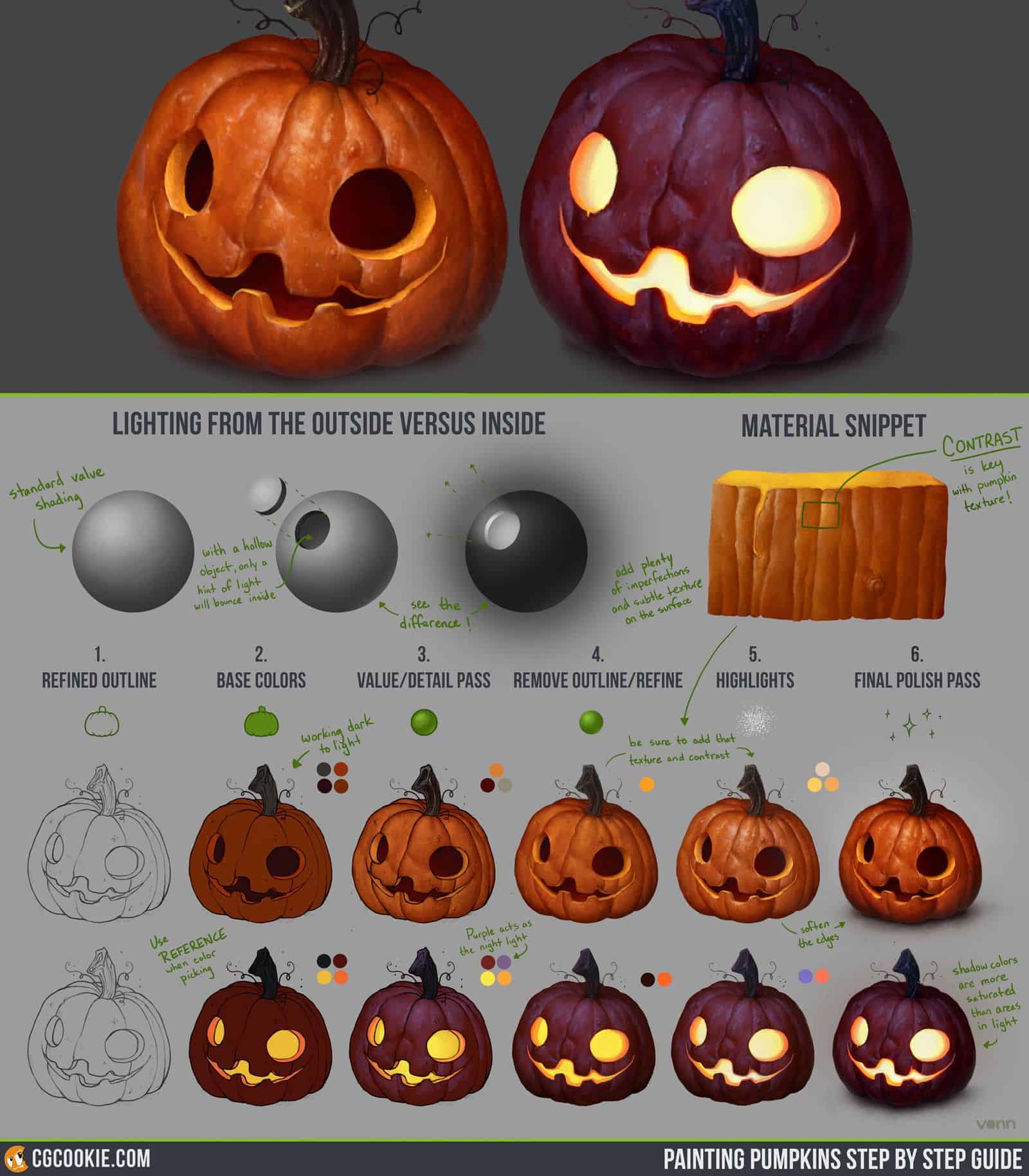 Just in case you’ve already planned on carving a simple, classic jack-o-lantern with your kids but you just can’t help wondering whether you might take the whole design to the next step, here’s an awesome resource that shows you how carved pumpkins can be jazzed up with a bit of paint as well! Check out how CG Cookie walks you through not only the painting process, but a bit of colour theory in order to get certain finished shades over your pumpkin’s orange skin. We’re particularly big fans of the idea of using metallic orange paint to add a bit of sparkle and shine to the classic shade! 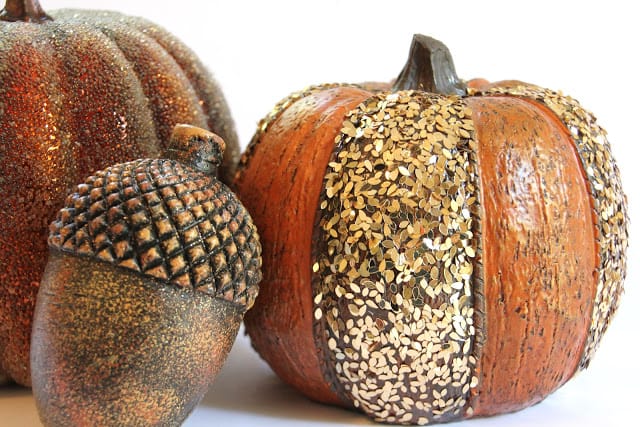 Are you feeling rather in love indeed with this whole idea of decoratively painted pumpkins but you can’t help feeling like you want to embellish or jazz them up even more once the paint has dried? In that case, we think you’ll really appreciate the way Lovely Little Life opted to add a little bit of glam and texture by adding things like metallic confetti, glitter, and embossing powder to their pumpkins’ surfaces once their painting was all done. 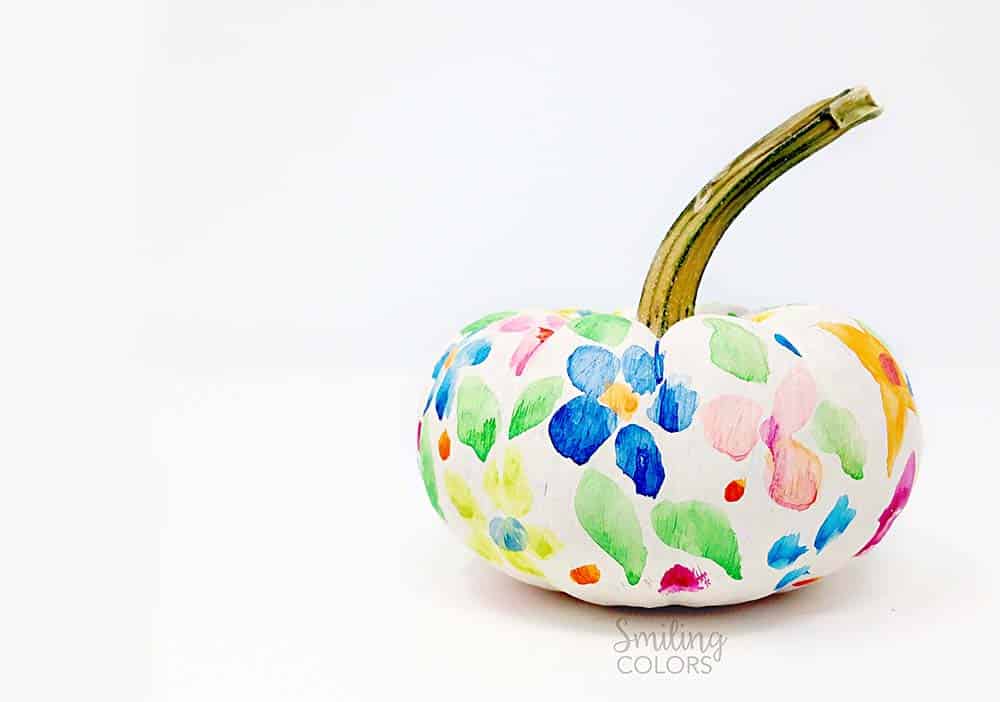 Are you a firm believer that the fact that you’re painting on a pumpkin is already fall enough, so you’re willing to take free rein when it comes to the patterns and colours you choose in your painting design? In that case, we have a feeling you’ll really appreciate the way Smitha Katti chose to put their painting skills to good use by creating flowers all over theirs! We love the watercolour painting style and how clearly they show you how to try it out yourself. 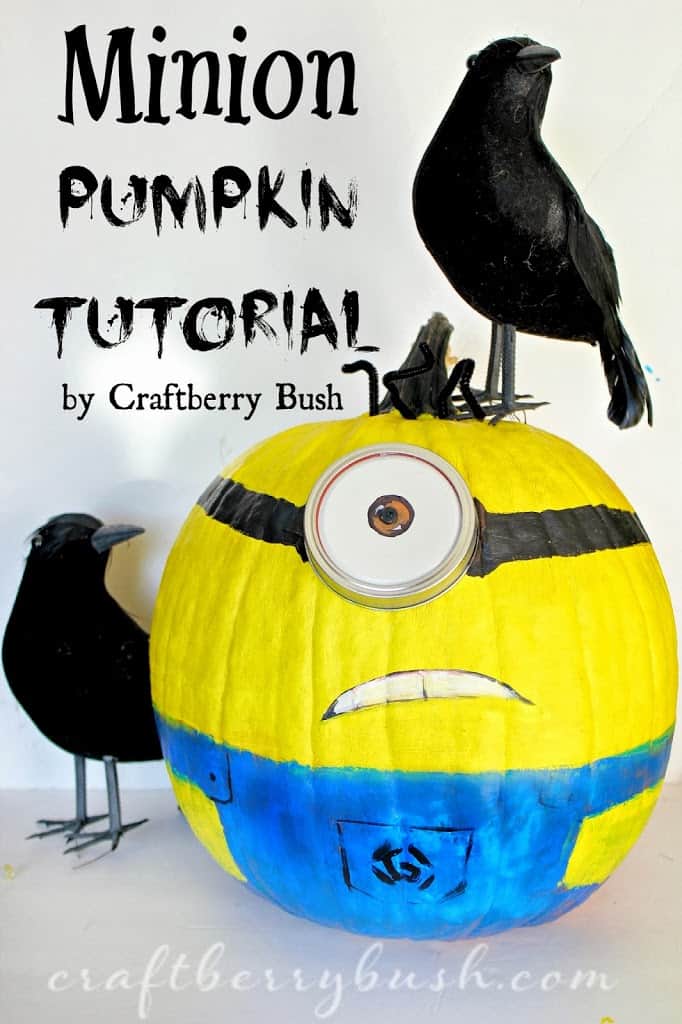 By now, any parent with kids of a certain age will be more than just a little bit familiar with Minions. They’ve gone beyond just being a character from a movie; they’re practically a pop culture phenomenon at this point! That’s why we thought this idea from Craftberry Bush for hand painting a Minion across the surface of a pumpkin, especially a taller, oblong looking one, was such a funny idea! They even show you how to make and add a goggle eye using the lid from an old mason jar. 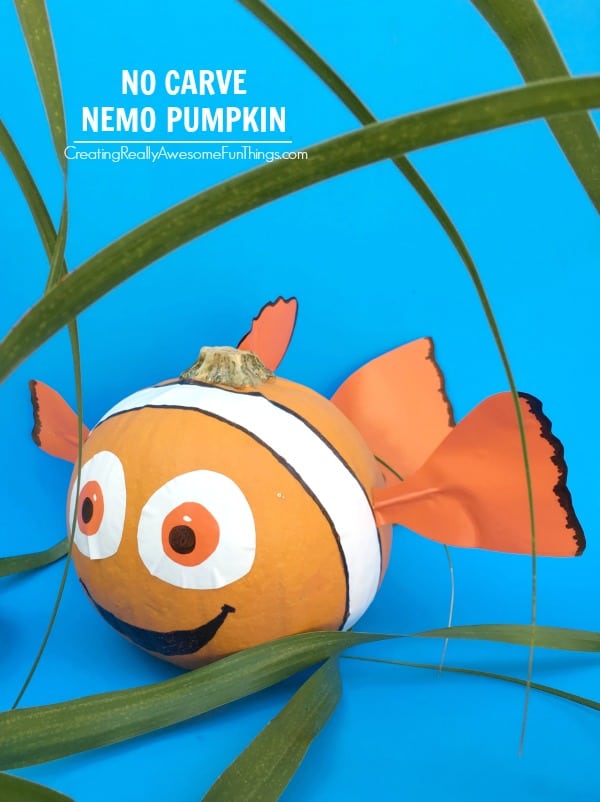 Have we really caught your attention now with this talk of painting and embellishing a pumpkin that looks like a character from one of your kids’ favourite movies, but you know they’ve never really gotten into the Minion craze? Then perhaps you’d have a little more luck helping them use their pumpkins, some paint, and some paper to bring Nemo from Finding Nemo to life instead! Creating Really Awesome Fun Things has all the steps outlined for you. 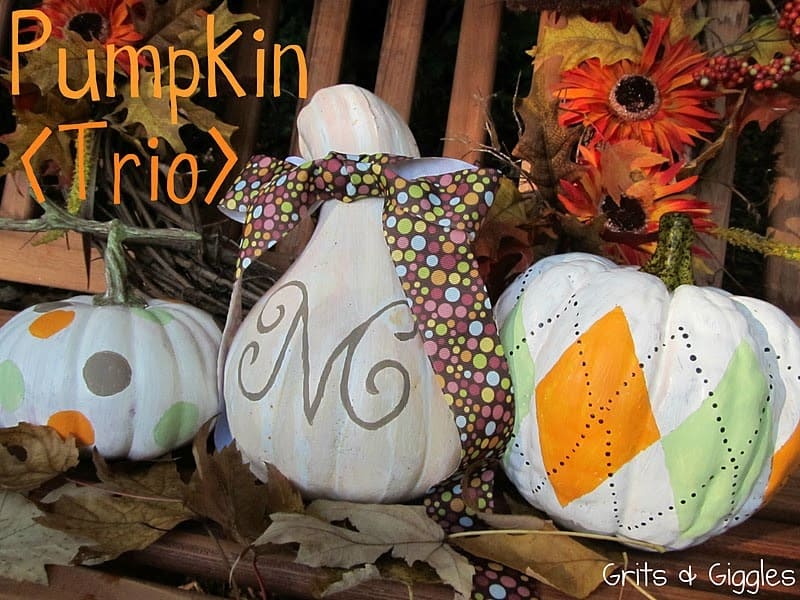 Are you still thinking about how much you love the idea of making all different pumpkins that still suit each other and appear to match, but you just haven’t seen an idea that jumped out at you yet? Well, if you’ve ever been a big fan of monograms then we think you might prefer something like this polka dotted, diamond, and lettered pumpkin trio outlined with full simple instructions on Grits & Giggles! 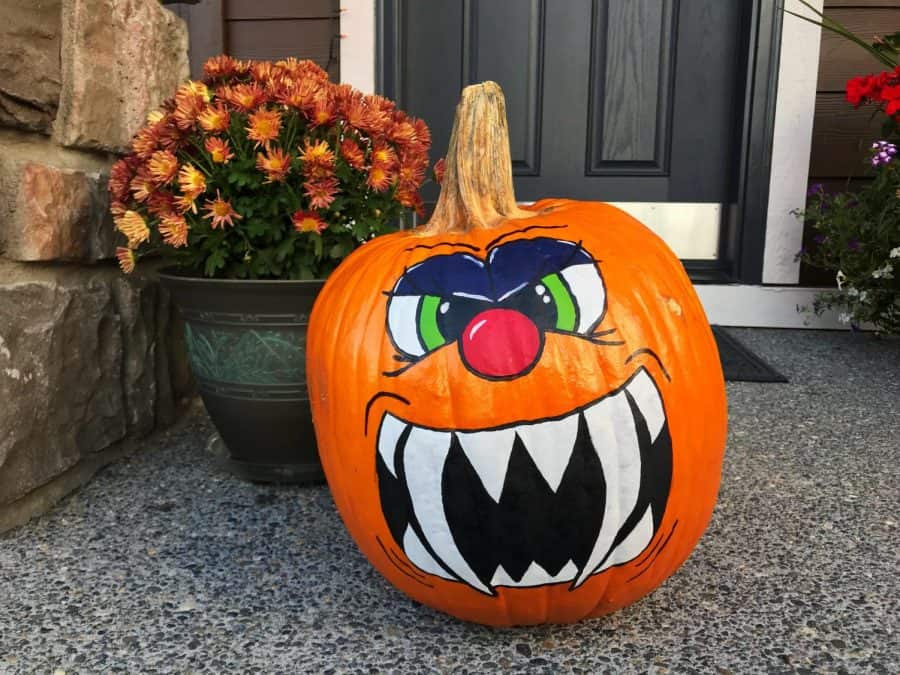 Perhaps you actually really like the idea of giving your pumpkin a scary face like you would if you were going to carve a jack-o-lantern but, being the talented artist you are, you can’t help lamenting that the level of detail you get when you paint doesn’t translate over into your carving skills? Then we have a feeling you’ll much prefer to just paint your scary face right onto the surface of your pumpkin, just like Makin’ Bacon did here!

Have you painted other designs on pumpkins for the fall season before that you had a lot of fun with but that you don’t see here on our list? Tell us all about what you created and how you did it or link us to photos of your finished work in the comments section! 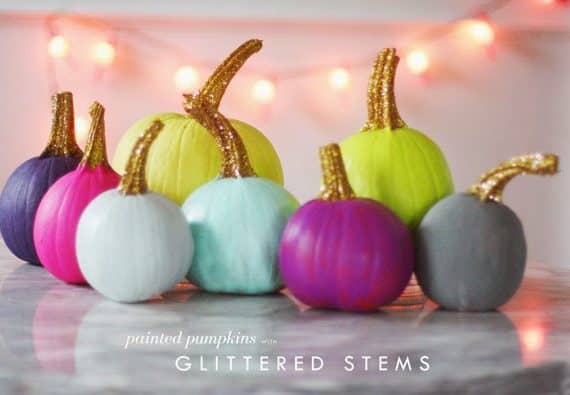 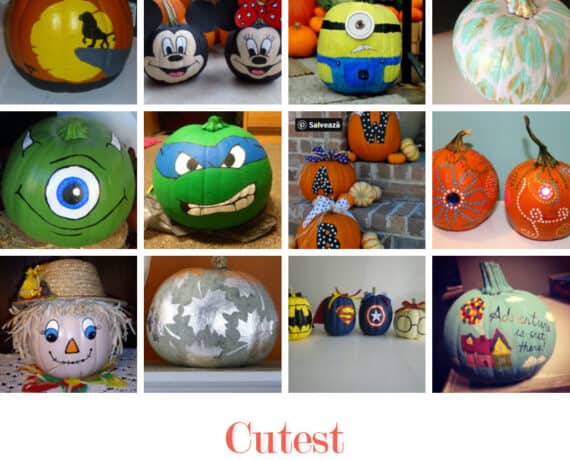 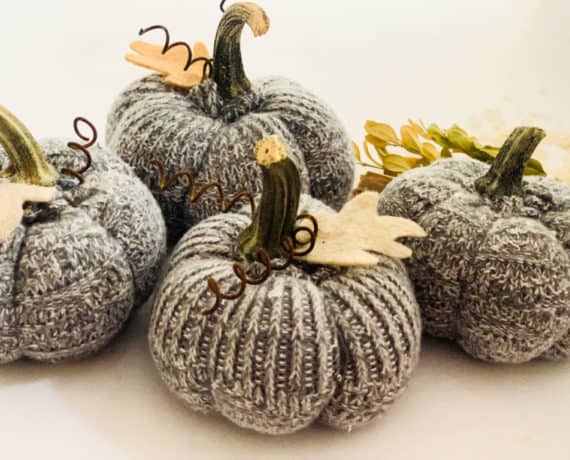 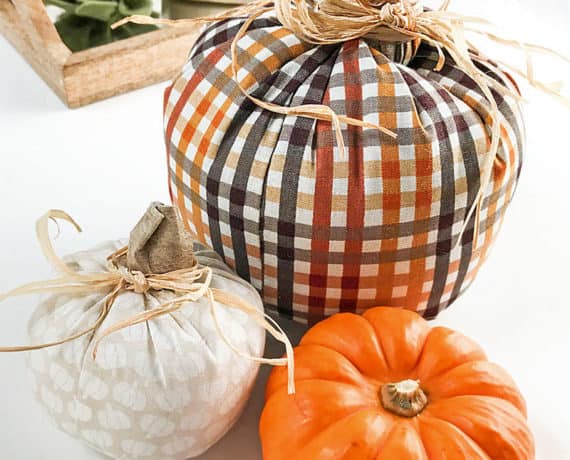 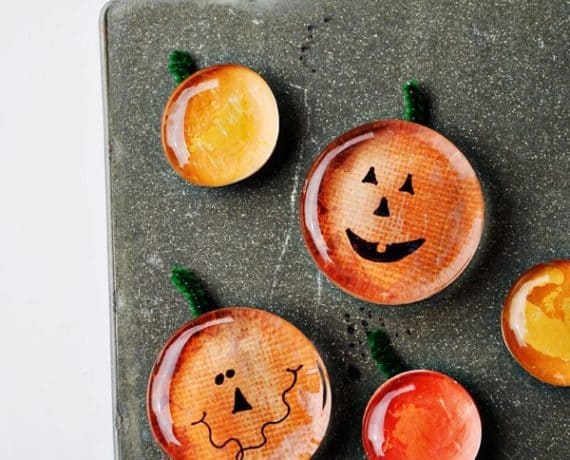 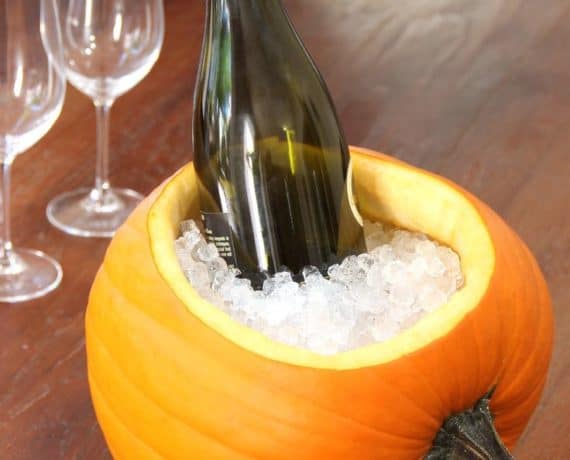 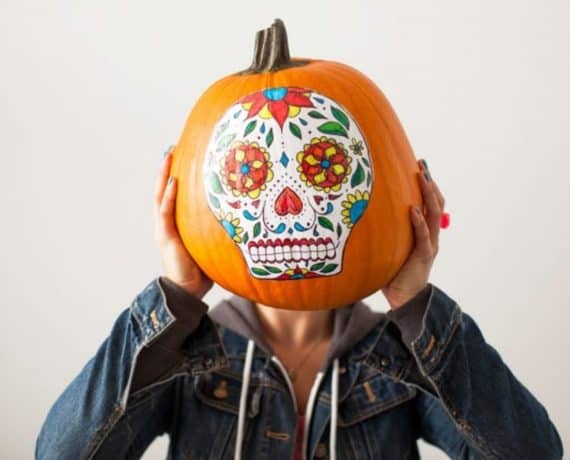