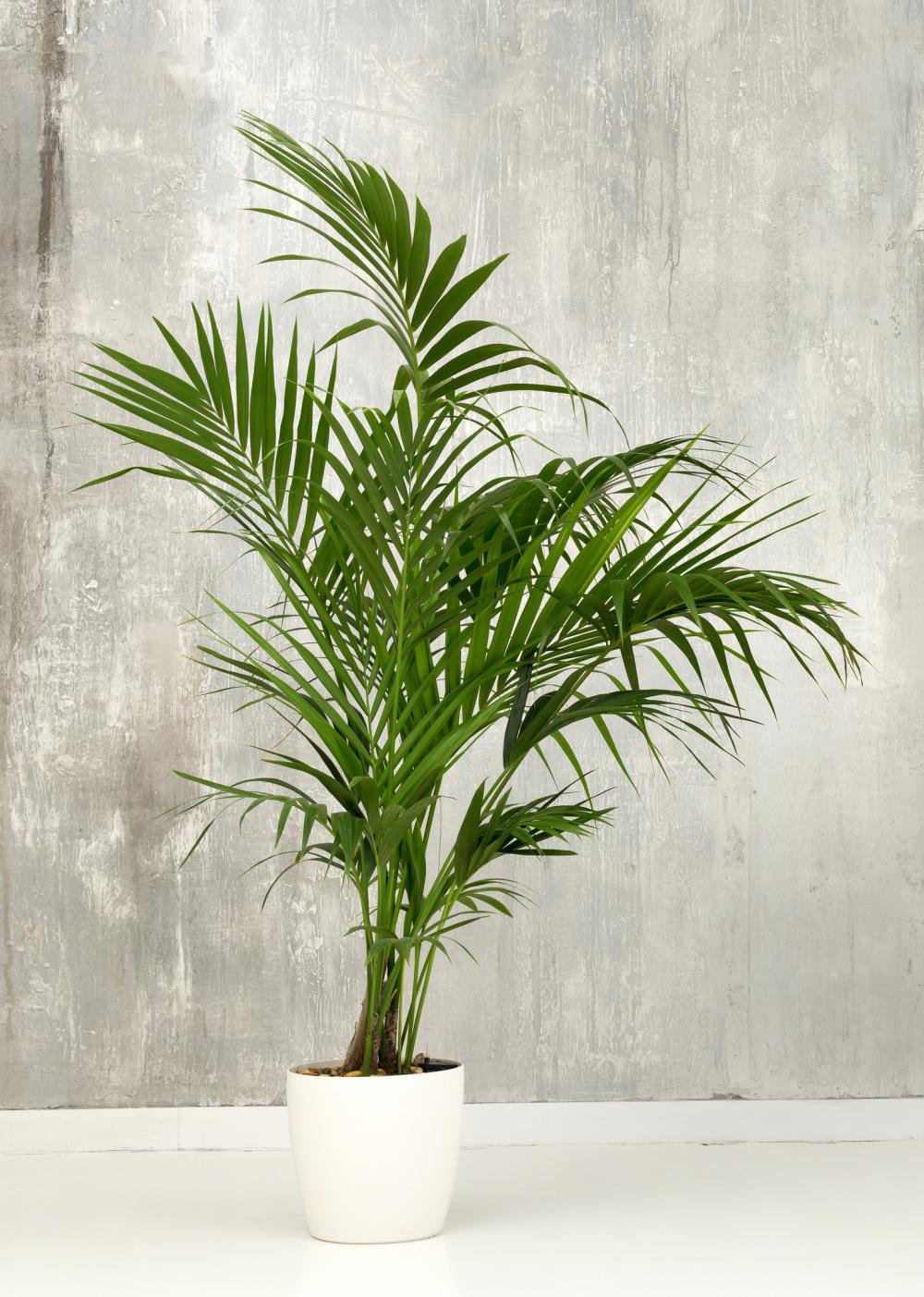 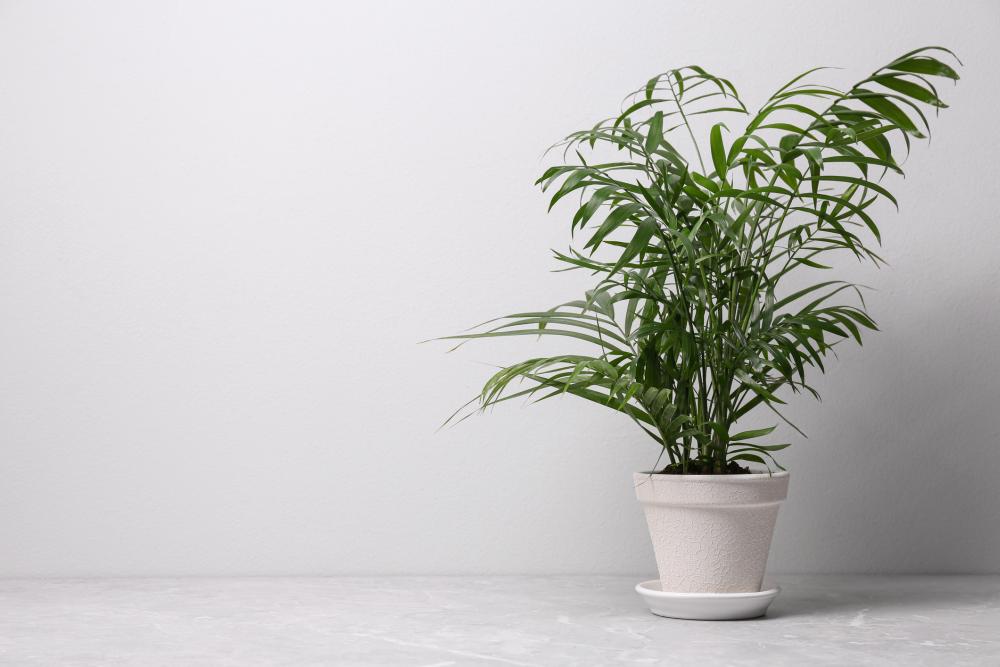 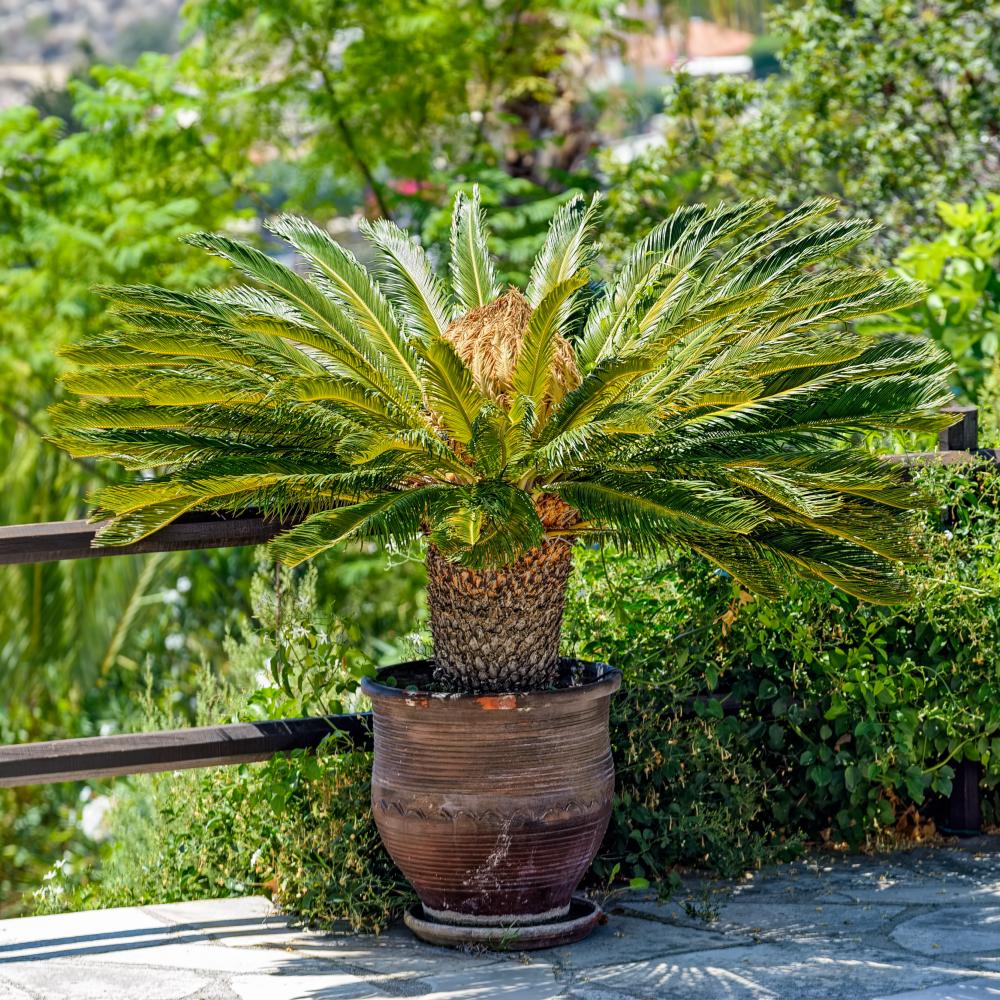 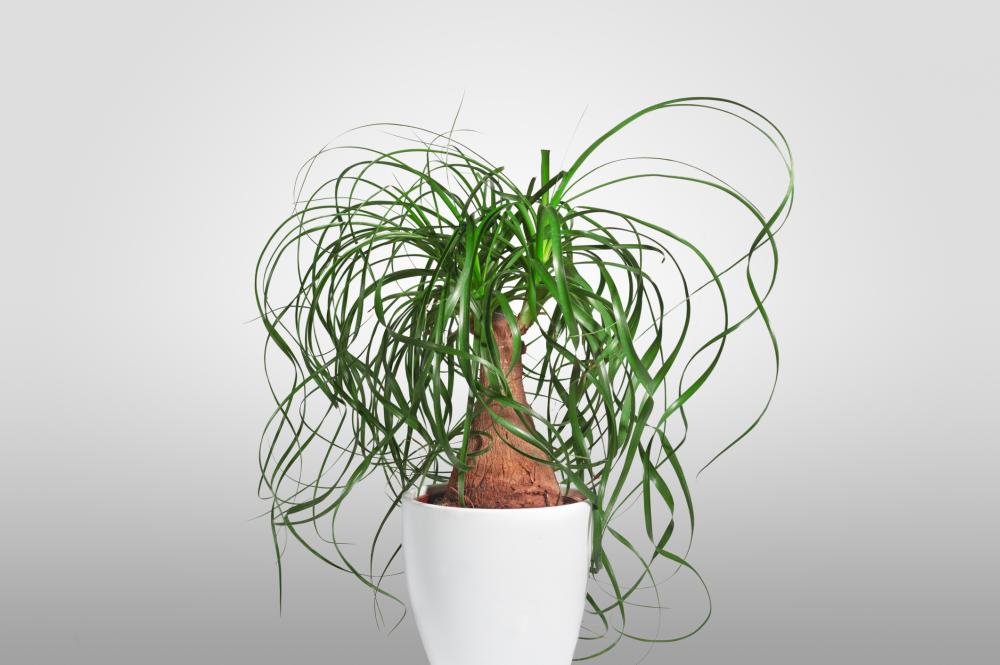 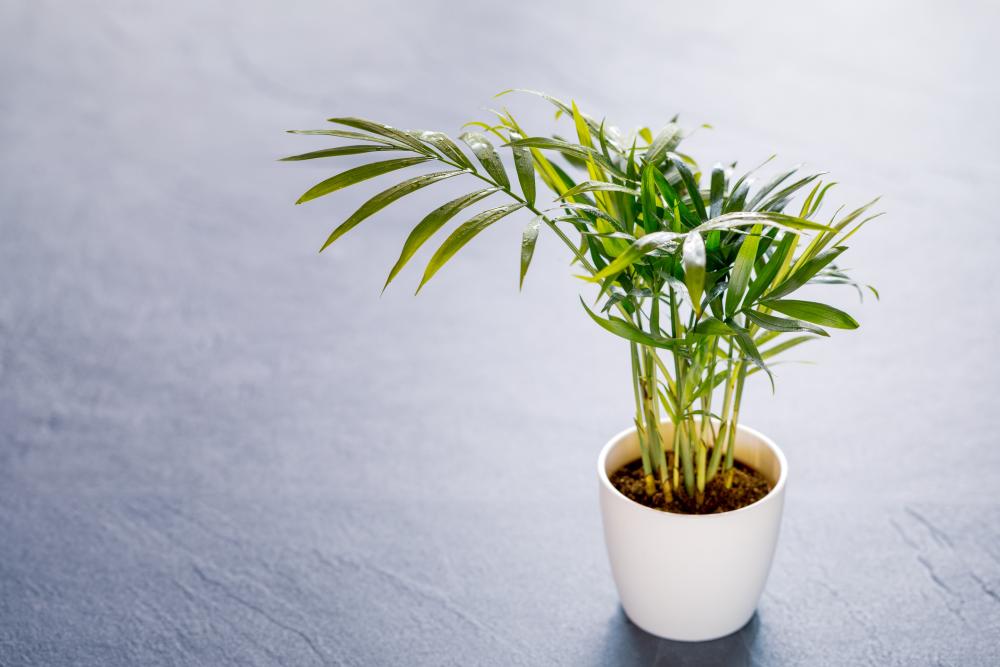 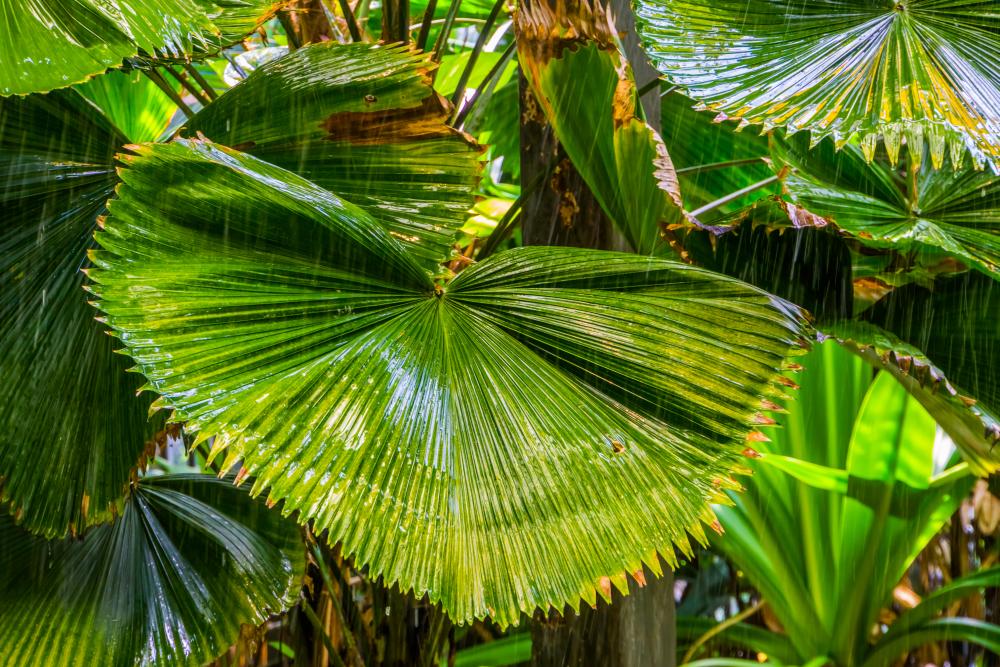 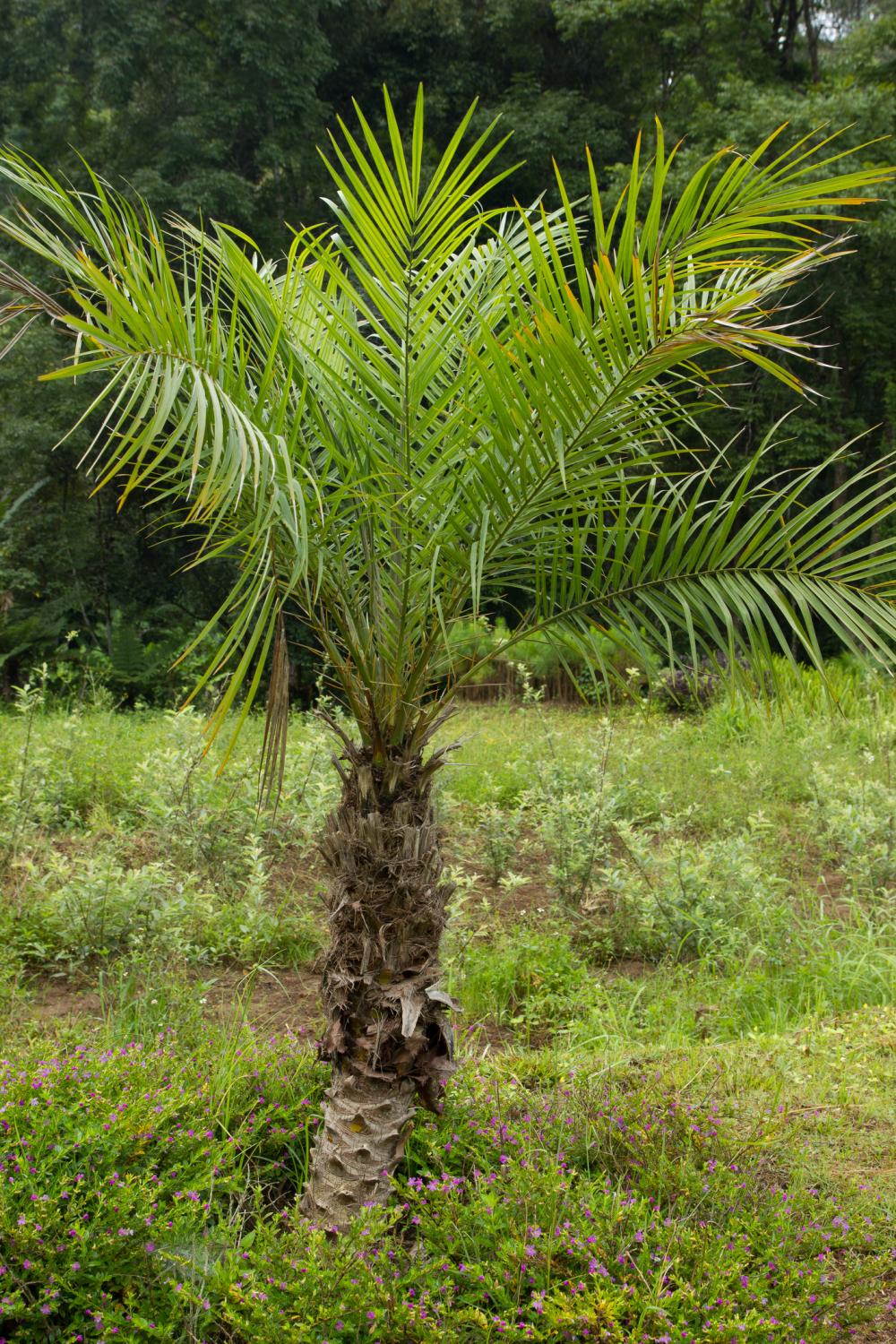 Palms have been an ideal candidate to grow indoors, thanks mainly to the symbolism associated with them. Known for their longevity and high tolerance, palms became synonymous with fertility and resurrection. But in practical terms, indoor palms are natural air filters that absorb the toxins and chemicals in the house and keep it fresh and clean. 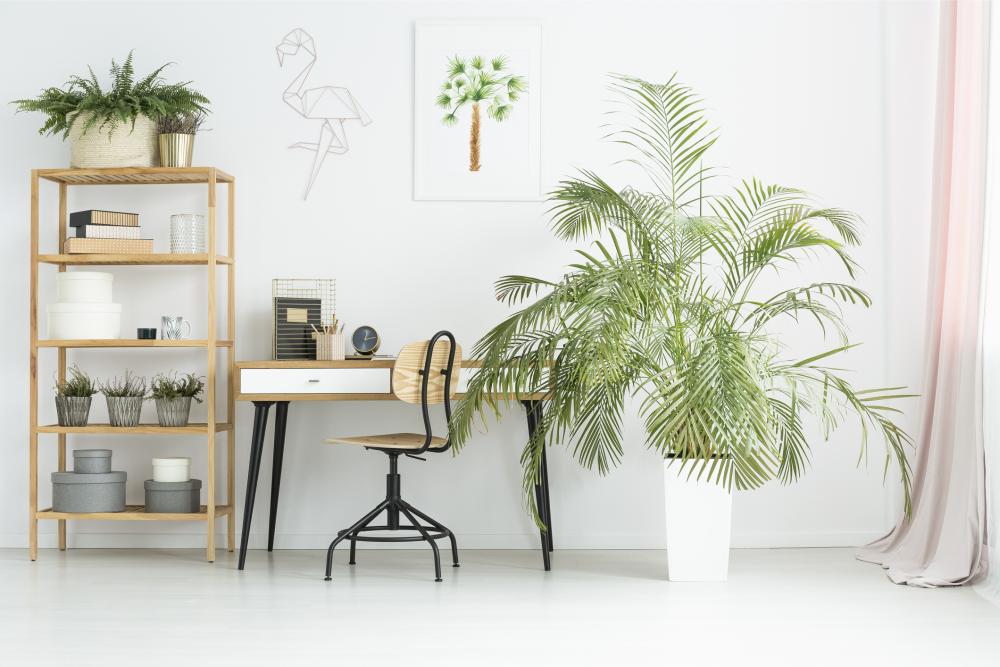 It’s no wonder that indoor palms became a fixture in many homes with their graceful fronds and bright and cheerful colors. Surprisingly, most indoor palm varieties have a slow growth rate and would take many years before they reach full maturity. That cuts down your care and maintenance work considerably as the tree needs less repotting, pruning, and feeding.

If you’re wondering which indoor palm varieties are best for you, read on and choose one or more from the list below.

The pygmy date palm (Phoenix roebelenii) is the right choice if you’re just starting with indoor palms. It’s a small variety, as the name implies, and requires little care. The palm is the forgiving type and will tolerate drought and poor soil without complaining or showing signs of stress.

Native to China, the tree grows between 4 and 8 feet at most. It has arching fronds with narrow leaflets covered with threads and fluff. It grows well in full sun as well as partial shade. The small palm has a high tolerance for cold weather, although prolonged exposure to freezing temperatures can force the tree to go dormant.

The ideal temperature to grow the pygmy date palm is between 65 and 75 degrees F. It requires misting once or twice a week during hot and dry summers to avoid common problems such as leaf tip burn. Watering should be regular to maintain moist soil without overwatering it. It needs little feeding about once a month during the spring and summer. You should use a customer fertilizer high in nitrogen and low in phosphorus. Stop fertilizing by the end of the summer to allow the palm to go dormant. You also need to cut down on watering during that period.

Another Chinese variety whose fronds grow long and broad. The Chinese fan palm (Livistona chinensis) can be found growing in the wild in Japan, Taiwan, and China. It’s a small variety that doesn’t grow an inch over 7 feet on a good day. It also takes a few years to reach its full height. And it’s safe to have in the house since it’s not toxic for either pets or children.

The palm thrives in filtered or indirect light since direct exposure stresses out the fronds. The fronds grow to different lengths, each having the wide leaf spreading like a fan. That means you need to move the pot around so that all the leaves get their equal share of the indirect light.

Temperature requirements vary by season. But you should maintain temperatures between 70 to 80 degrees F during the day and 55 to 60 degrees F. during the nighttime. The Chinese fan palm thrives in normal humidity levels averaging 40 percent. In dry weather, or if you use a cooling system around the clock, you might need to mist the palm or place a humidifier near the pot.

The palm needs a lot of water to keep the soil moist and has a low tolerance for dry soil. Don’t overwater it since the roots of the palm are sensitive to wet or waterlogged soil. As for feeding, this palm takes its time to grow and averages a few inches of growth a year. That means you won’t need to feed it. Slow-release compost and organic materials are a good option to supplement the tree with the necessary nutrients.

A highly ornamental palm that comes from the tropics of Guatemala, the parlor palm (Chamaedorea elegans) grows to about 12 feet high. But it will take up to 7 years before it gets to that full height. The fronds are short and arc slightly displaying the short green leaflets. It grows in a clumping shape which keeps it compact for most of its life.

The parlor palm prefers filtered light similar to the light it gets growing in the shade of large trees in the tropical forests. So keep it near a window that gets the full sun without exposing the palm directly to the sunlight. A lace curtain can be ideal for filtering the light. The temperature needs to be between 66 to 75 degrees F. during the day. The palm can thrive in normal humidity levels and rarely requires misting.

A light feeder, the palm doesn’t need fertilizing except when the soil has become depleted. Organic feeding suits it well since the palm can get stressed with fast-release chemical fertilizers. Apply the fertilizer about three times during the growing season. As for watering, you need to water it once a week or ten days during the spring and summer. Allow the top 2 inches of the soil to dry out completely between irrigations.

The ponytail palm (Beaucarnea recurvata) looks almost exactly as the name describes it. The long and slender leaves go out of their way to create cascading arcs that give the palm a wild look. Still, it’s an elegant look where every leaf fits exactly within the predetermined design. But that doesn’t mean you cannot give a helping hand and create a design of your own. The ponytail palm with its curly leaves is quite flexible.

A member of the Asparagus family, the ponytail palm is not an actual palm. Not with its bulbous and yellow trunk anyway. And since it doesn’t grow above 8 feet, it’s a suitable addition to your houseplants. And as with other indoor palms, it doesn’t reach those 8 feet in a hurry.

If you’re new to indoor palms, this is the palm to start with. It’s an easy-to-grow plant that tolerates the occasional drought and inadequate light conditions. Speaking of which, the ponytail palm prefers bright light and direct sunlight. You can place it on a window sill that gets between 6 to 8 hours of sunlight during the growing season. But if that’s not possible, partial shade or indirect light is also good enough for its curly leaves.

The palm also favors mild temperatures over warm weather. It thrives when the temperature is between 50 to 55 degrees F. As for watering, moist soil is recommended, and the pot needs to dry out between irrigations. You won’t need to feed it often either. Between two to three times a year during the spring and summer are enough.

Sago palm (Cycas revoluta) is like a miniature palm tree. The same brown trunk and rich fronds with their slim and narrow leaflets. Native to Japan, it goes by many names, including Palm Cycad, Japanese Funeral Palm, and King Sago. It’s a fixture in funeral rituals in Japan, although it’s not a real palm.

The sago palm is a dwarfish plant that doesn’t grow above 3 feet. You can grow it in any corner or place a group of three palms together for maximum effect. However, you need to be wary of its toxicity. Toxic for both humans and pets, this is a plant to keep away from any children and pets at home. Touching or pruning the plant is safe since it’s only toxic when ingested.

The palm can grow in partial shade, but it requires medium to bright light. You can place it in direct sun or filtered light. Also, keep in mind that this palm thrives in warm temperatures. If the weather turns cold in the winter and the temperature dips below 20 degrees F. the plant will most likely die. Exposure to cold drafts from an open window or the air cooling systems can also cause damage.

Water the plant lightly and only enough to get the soil moist. Allow the top 2 to 3 inches of the soil to go completely dry between irrigations. As for feeding, it only needs a few organic fertilizer applications during the growing season. Twice or three applications a year are good enough for this palm.

The majestic palm (Ravenea rivularis) deserves this name since it displays elegant fronds and light green leaflets that shimmer in the light. Originally from Madagascar, the upright-growing palm can grow to 15 or even 20 feet tall. And unlike other indoor palms on this list, it has a fast growth rate, so you need to prepare an adequate place for it before starting the plant.

But don’t let its fast growth rate scare you off. This is a low-maintenance palm that can thrive even when the growing conditions are less than optimal. The only thing it’s averse to is direct sunlight. In its native habitat, the majestic palm grows in the shadow of trees and bushes where it receives dappled light. So it requires indirect light as long as the light is bright. A lace curtain drawn across the window will create light conditions similar to those in Madagascar.

Average humidity similar to the one found in most urban homes is good enough for this palm. But if you place it in an office where the air cooling system drains the humidity of the air, you’ll need to install a humidifier close to the pot. Otherwise, misting it two or three times a week will keep it comfortable.

Keep the room temperature between 65 to 75 degrees F. all year round to avoid stunting the growth of the majestic palm or forcing it into dormancy. As for watering, it needs to be irrigated once or twice a week depending on the season and the temperature of the air. Feed it three times a year with slow-release organic compost to keep it healthy.

A native of Australia, it has slender and graceful fronds that boast of bright green leaflets that reflect the light. The fronds don’t arch nor droop despite their height, and the plant looks like it’s in a good mood all the time.

With all its beauty, Kentia palm is an easy-to-grow palm that requires low maintenance and has a high tolerance for different growing conditions. It prefers partial shade or medium-light as long as it doesn’t get placed in direct sunlight. The ideal temperature for the palm is between 65 and 75 degrees F. However, it can tolerate cold temperatures as low as 25 degrees F.

Water the palm about once a week and allow the soil to dry out between irrigations. Cut down on watering during the fall and winter and allow the palm to go dormant. And as a light feeder, the Kentia palm prefers slow-release organic fertilizers. Apply compost or organic liquid fertilizers once a month during the spring and summer.

How to Repot an Indoor Palm Plant in 9 Easy Steps