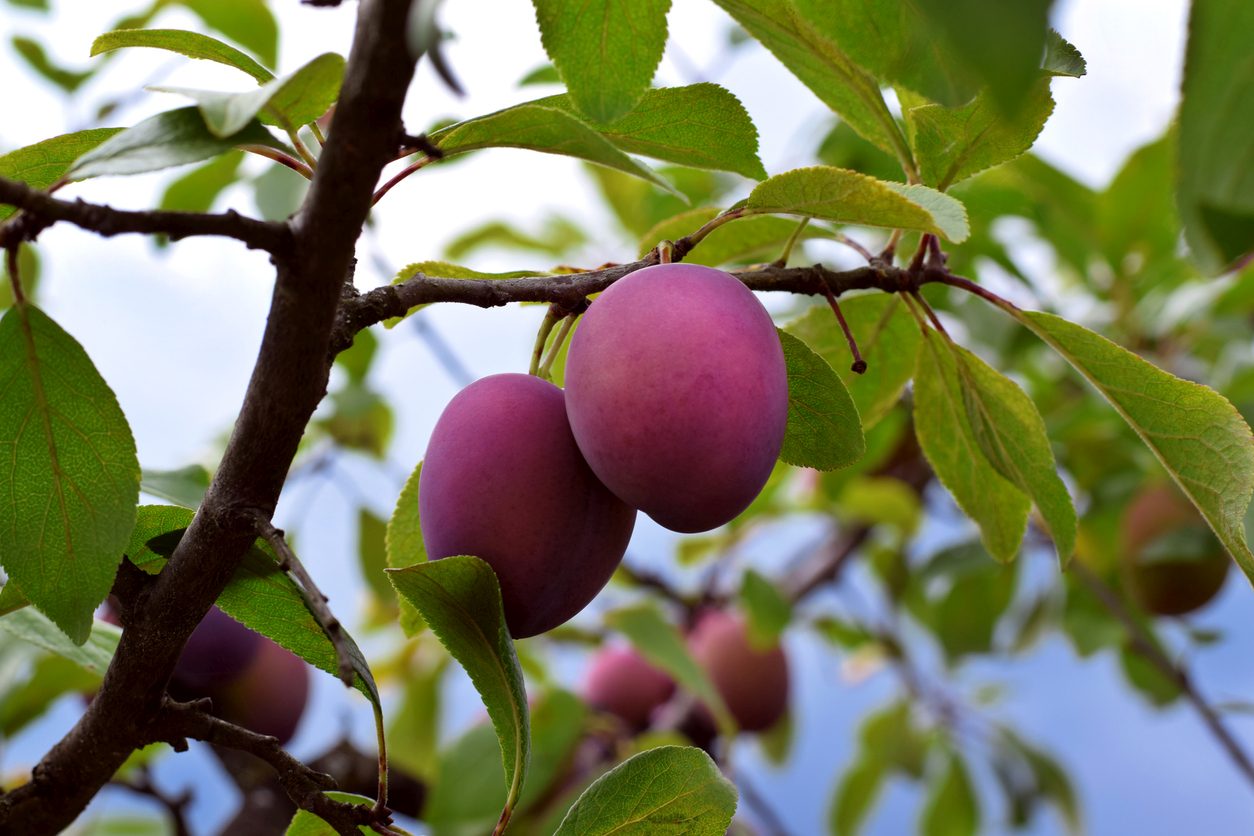 When looking for a fruit tree to grow in your garden for shade, crops, and beauty, the plum tree delivers in spades. It doesn’t take much space and once you got it started, it won’t require much care or attention. The juicy fruits fit in every recipe from fruit salad, to juice, jam, and pies. 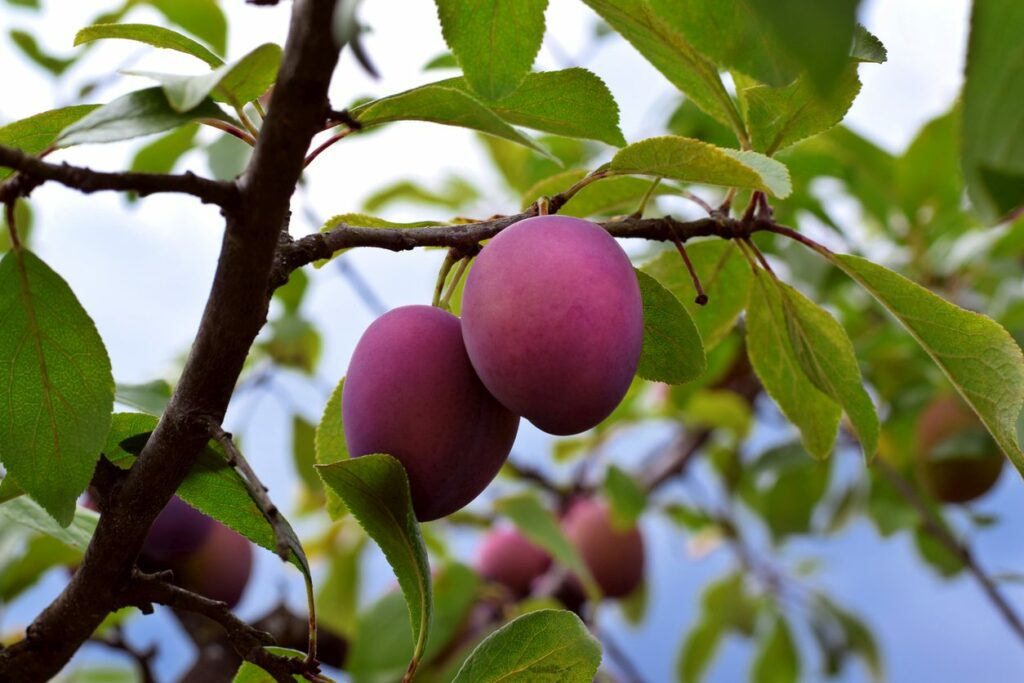 It’s no secret that fruit trees add a certain flair to every garden. You can use your plum tree as a focal point and develop a landscape around it from scratch. This article covers everything you need to know about plum trees including the varieties, how to care for them, and how to harvest the juicy plums.

The plum (Prunus domestica) is a fruit tree that belongs to the Rosaceae family. The oldest plum remains were traced back to the neolithic age. This is proof that plums have been a staple food for humans for thousands of years. The three natural species of prunus originated from Eastern Europe and modern-day Iran.

The fruits come in various colors although, for the most part, they maintain their spherical shape. Some cultivars have elongated and slender fruits. You could have yellow plums, red, maroon, dark violet, or even green. While they are not known for their nutritional values, fresh plums are about 87 percent water. There’s nothing better than a chilled plum to quench your thirst without increasing your calory intake.

In the early spring, the plum tree covers its foliage with beautiful white flowers. Each flower has white petals that radiate out of a tiny red disk in the middle. If your garden is a hub for pollinators, about half of these blooms could get pollinated which is the first step toward fruit production.

The mature plum tree reaches about 20 feet in height although without pruning they could double that height and width. They are deciduous trees that flower between March and April. The fruits get ripe in mid-summer and you can harvest them at any time between July and September.

Even though the three natural plum tree species have sustained humans for thousands of years, horticulturalists weren’t really happy with them. They worked on improving on those species with different cultivars that produced more crop, handled different soil better, and were more disease-resistant. Most cultivars fall under three categories: American, European, or Japanese hybrids. Here are some of the best plum tree varieties to grow in your garden.

When choosing the right cultivar for your garden, make sure it can handle your weather conditions and is disease-resistant. Plums are notorious for attracting pests and diseases as we’ll see later. So if you want to have a successful plum tree in your garden, I recommend the Cambridge Gage or Victoria for their reliability.

How to Grow the Plum Tree

Planting a fruit tree is not the same as planting an annual or a flowering plant. Plum trees live for many years and are adverse to being moved around. So you need to plan ahead where you want to plant it and whether you have enough space for the mature tree. Avoid planting the plum tree close to a wall or a structure like a shed. Give the tree enough space in all directions to grow and get air circulation. Here’s how to plant it in easy steps.

As every horticulturalist will tell you, once you have your fruit tree established, it will for the most part take care of itself. This is true for the plum tree as well. Apart from pruning and pollinating it, this tree is self-sufficient and won’t hassle you with constant care and maintenance.

The water requirements of the plum tree vary based on the stages of its growth. A young tree that’s less than two years old needs plenty of water. You’ll need to water the tree on a weekly basis and keep your watering close to the ground to penetrate the soil and reach the roots faster. Always water the young plum tree in the early morning so that the moisture doesn’t evaporate before it reaches the roots. For mature trees with established roots, you can water them once every two weeks during the growing season. When the tree goes dormant, scale down watering. Most experts recommend that you water the tree until October to help it go through dormancy.

You’ll need to fertilize your plum tree once a year. That’s usually done before the growing season in the early spring. You can use a balanced fertilizer or organic compost. You won’t need to fertilize the tree again for the rest of the season unless you have rather poor soil. In that case, another application of fertilizer around bloom time and before the flowers are pollinated helps produce a good crop. Avoid fertilizing toward the end of the season since that would interfere with the tree’s dormancy cycle and leave the new shoots vulnerable to the cold winter temperature.

Without regular pruning, your plum tree will be unmanageable. It can double its height and size within a few years unless you take your trusty shearing scissors to it regularly. The best time to prune the young trees is in the early spring before the growing season. For mature trees, you can prune them in mid-summer. Depending on the type of hybrid you grow, your pruning style varies. Japanese hybrids are usually thicker and denser so you need to prune the center of the tree leaving the main outer branches. In American and European hybrids you do the opposite. Prune the outside branches and leave the middle branches growing intact. Don’t prune in the fall or winter.

Aphids are the most common pest that attacks the plum tree. You can get rid of these pests with neem oil. If that doesn’t work you can spray the branches and foliage with a homemade brew of horsetail tea or stinging nettle tea. Avoid using pesticides since the residue could find its way into the fruits.

As for diseases, you need to watch out for plum rot and scab. Both are fungal infections that are usually caused by inadequate air circulation, high humidity, and water landing on the leaves. Remove the infected leaves or fruits and get rid of them safely before the infection spreads to the rest of the tree.

Plums become ripe at different times of the year depending on the hybrid. Whatever cultivar you grow, you will know that the fruit is ready to harvest when the texture feels soft under your thumb. To harvest it, hold the ripe plum in your hand and twist it off the branch. It will come off easily. Ripe plums are ready to eat immediately. You can also store fresh plums in the fridge or use them in all sorts of cakes, pies, and smoothies.

Can You Freeze Fresh Plums? Here’s What You Must Do