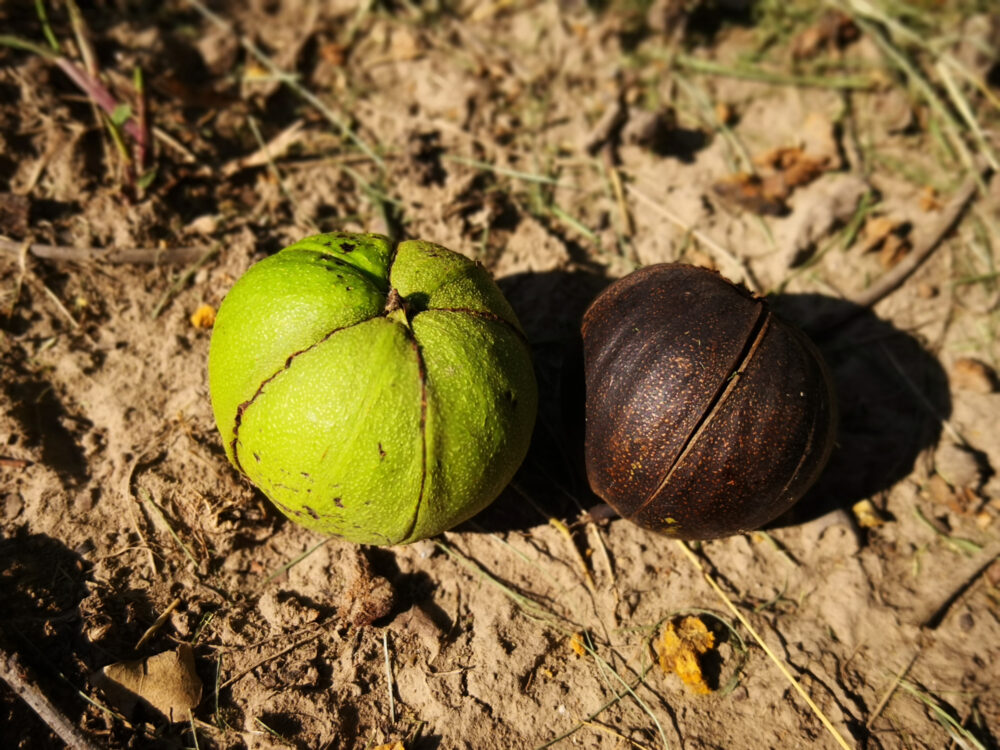 Hickory nuts are a natural source of food that can come in handy when you’re out hiking and run out of supplies. But with so many hickory trees dotting the landscape in North America, it’s not easy to know which hickory type is edible and nutritious. Moreover, hickory nuts are not available to eat out of the hard shell. There’s some cracking and curing to do before you can finally set your teeth to their nutritious and delicious flesh.

The best part is there’s no growing or caring involved. You’ll find those precious nuts wherever hickory trees grow. You just need to know where to look and how to identify them. So let’s borrow a leaf from the Bear Grylls book and learn one thing or two about survival in the American wilderness or on the trail path. Just a word of warning though. If you have a dog out hiking or camping with you, don’t feed them these protein-packed hickory nuts. They would give the dog digestive problems. 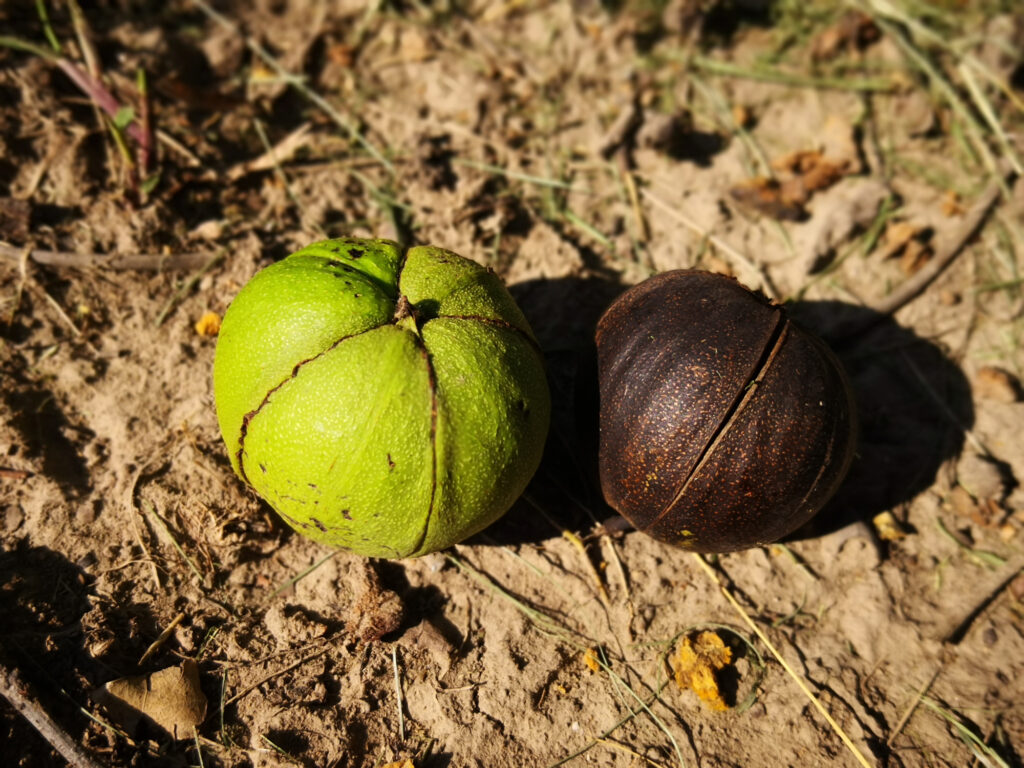 All about Hickory Nuts

Some trees bear fruits while others are just only too happy just looking pretty. Hickory trees which are ubiquitous across the American landscape happen to bear hickory nuts (Carya). These gifts of nature are rich in protein and fats and are packed in calories.

Only three and a half ounces of hickory nuts have about 657 calories and will give you about a quarter of your daily needs in fiber. In addition, the same amount also contains almost half your daily value of zinc, magnesium, and phosphorus. It has trace amounts of iron, copper, and twice your daily value of manganese. Carya is also packed with vitamins B1, B2, B3, B5, B6, and C.

However, it is loaded with saturated fats so you shouldn’t consume these nuts in large amounts.

When you find hickory nuts lying around among the fallen leaves they will usually be covered with an outer husk. Sometimes the fleshy part inside would be rotten or inedible. So it’s important that you identify the good and edible nuts to avoid a case of food poisoning.

Whether you’re out on the trail or are lucky enough to have a hickory forest near you, hickory nuts are a versatile food source. You can use them in different recipes and dishes or just simple bake them on their own where they become a delicious and filling snack. Here are some of the ways you can use these sweet nuts.

As every survival expert will tell you, finding food out in the forest is easy. The hardest part is knowing which food not to eat. Some nuts are outright poisonous while others may not be even ripe at all. So how would you identify a hickory tree and know whether the hickory nut you’re about to crack and roast on fire is good for you or not?

First, you need to identify the hickory tree itself. These giant deciduous trees grow to anything between 60 feet to 120 feet. They usually shed their leaves in the fall and along with them the hickory nuts as well. The leaves are usually narrow with serrated edges. They grow in pairs along the stalk with a single leaf at the end. Each leaf averages about 9 inches long although some hickory varieties have smaller leaves no more than 2 inches long. In the spring they produce small yellow flowers.

On the tree, the hickory nuts are usually green and large. But once they’re ripe they drop to the floor under the tree among the leaves. The nut usually has two shells. The outer husk which you can remove by hand or using a sharp blade. There’s also an inner shell, but that one is rather tough and you have to crack it using a hammer or a rock.

Inside the hard shell, you’ll find the meat in different compartments much like walnuts. This is different from similar-looking nuts such as the poisonous buckeye nut which has one solid nut inside its shell.

To complicate things further, hickory nuts come in different types and varieties. And not all of these types are tasty or even good for human consumption. So you should make sure that you know exactly what hickory nut is in your basket before you start cracking and curing them. Here are the main hickory nut types you will find across the plains of North American from Mexico to the south to Canada in the north.

Named after its distinctive bark which at maturity tends to peel off and give the tree a shaggy look. This tree produces some of the finest hardwood which goes into makes floorings, doors, and furniture. The nuts of this tree are very much edible and you can roast them on the campfire and eat them out of the shell. But since you can’t tell the difference between one hickory nut and another, the bark of the tree should be a dead giveaway. You’ll find the nuts lying under the tree among the leaves. The nuts are usually round averaging about 2 inches wide.

Of all the hickory nuts you can come across on the forest trees, those produced by sand hickory are the sweetest and best edible ones. The trees grow to about 80 feet high and have a smooth and dark gray bark. The nuts are round, about a half-inch in diameter, and with a thick shell. But when you make your way inside the hard shell, you can use the nut inside to replace pecans and walnuts. It definitely tastes better than walnuts.

Also known as mockernut, this tree bears large nuts with thick shells that are difficult to crack. However, the meat inside is relatively small but still really delicious. The tree reaches about 100 feet tall and its leaves are narrow and average about 15 inches long. Once you’ve collected enough of these nuts, you’ll need a strong hammer or a nutcracker to crack the shells open. Even then you’ll end up with a handful of nuts that can barely count as a snack.

If you come across those hickory nuts, you can consider yourself lucky. Their brown shells are rather brittle and the nut inside is about one inch in diameter. On top of that, the flesh is sweet and nutritious. So if given a choice between collecting red hickory nuts and white hickory fruits, you shouldn’t waste your time with mockernut and get as many red hickory fruits as you can. The trees are not as widespread as pignut or shaggy bark hickory. They average about 100 feet tall and their leaves are pale green. The nuts don’t need cooking or roasting and you can help yourself to them out of the shell.

These trees have a modest height between 60 to 80 feet at maturity. Their bark is usually gray with crisscrossing patterns. They grow near shaggy bark hickory trees so if you find one type, you’ll know the other hickory tree is nearby.

The leaves of pignut hickory are about 12 inches long and turn golden in the fall. The nuts become ripe also in the fall and their green husk turns light brown. They’re often round but thin which gives them the shape of a pig’s snout. These nuts are usually bitter even after you cook them but they’re still edible.

How to Harvest Hickory Nuts

In the fall, hickory nuts become ripe and fall of their volition off the tree. You won’t need any special tools or skills to harvest them. A regular basket or even a small bag will do. And armed with your knowledge of which hickory nut types are sweeter and worth the effort, you set out to collect as many as you can. You might have to compete with squirrels though since that’s their favorite food.

You’ll find the nuts hidden among the leaves. So use a stick to scatter the leaves and uncover the delicious nuts under them. Usually, you’ll need to collect a whole bunch of these nuts to make a single hickory nut pie. It might take the whole day to fill a medium-size basket, but it is well worth all the trouble.

How to Crack Hickory Nuts

Some hickory nuts will fall out of the tree with the husks already open. This makes them easier to peel off. But if that’s not the case, you can use a knife to remove the husks. When you get to the hard shell, it’s time to use a tool. Not all hard shells are as brittle or ready to crack as the red hickory nut. If you’re out in the forest and you don’t have a handy walnut nutcracker, you can use a rock to crack the shell open.

Try to not use excessive force to crack the shell since that could damage the nut inside. Once you’ve made a crack in the shell, use a knife to pry it open and consume the flesh inside.

12 Best Substitutes for Pine Nuts in Sweet and Savory Recipes