You’ve probably heard that growing potatoes isn’t for the faint of heart, but did you know that chitting potatoes made that process a lot simpler? If you’re new to planting potatoes in your garden, you must be wondering what this term is all about. Chitting potatoes is another word for encouraging potatoes to sprout seeds. As you can imagine, this is not as simple as leaving the potatoes in the kitchen to sprout whenever and wherever they feel like it. There’s a method to the potato’s madness.

Every gardener who takes gardening seriously doesn’t like to leave things to chance. And when it comes to potatoes, chitting is a complex process that needs the right conditions to ensure its success. But before you jump on the potato wagon and start sprouting potato seeds, you need to ask yourself whether chitting potatoes is right for you. And whether there aren’t better ways to plant and grow potatoes. Read on to find out about chitting potatoes, the advantages and drawbacks, and how to ensure that you get your potatoes to sprout every time. 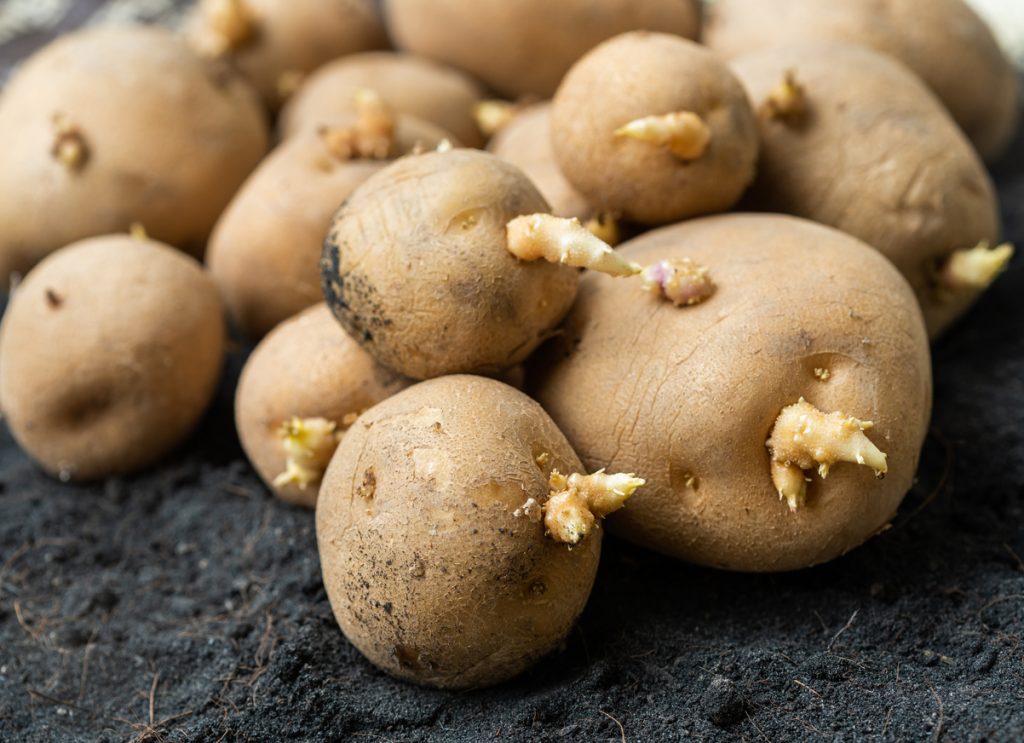 All about Chitting Potatoes

Popular as they are, potatoes have sustained whole civilizations and helped mankind through hard times. The Irish Famine, for example, was the result of widespread damage to the potato crops nationwide. Perhaps that explains the different varieties of this precious veggie and why there are so many ways to grow it.

Whether you plan to grow potatoes in the garden, in a container, or above ground, starting them from seeds is usually the best course of action. And that’s where chitting potatoes come in. If you’re looking to harvest early potatoes and you live in a zone with a short growing season, then chitting is definitely your best course of action. This includes zones 3 to 6 that have notoriously short days, and the summer months are fleeting.

That said, we should note that commercial potato growers don’t resort to chitting. It’s mostly the amateur gardener’s best way to ensure that the potatoes will sprout and have a good yield. Since we’re all friendly gardeners here, and we just want a few pounds of potatoes to cook or bake by the end of the season, then I recommend potato chitting for a successful crop.

Since potatoes are not that easy to grow, gardeners have tried to find ways around that problem. Simply planting a healthy-looking potato in the soil and waiting for it to sprout and grow into a plant is by no means guaranteed. You have to coax the potatoes and cajole them into triggering some sprouts out of them. Only then can you be sure that you’ll have a few potato plants growing in your garden that season. But it’s not just about increasing potato planting success rates. Here are other reasons you’d consider chitting potatoes. 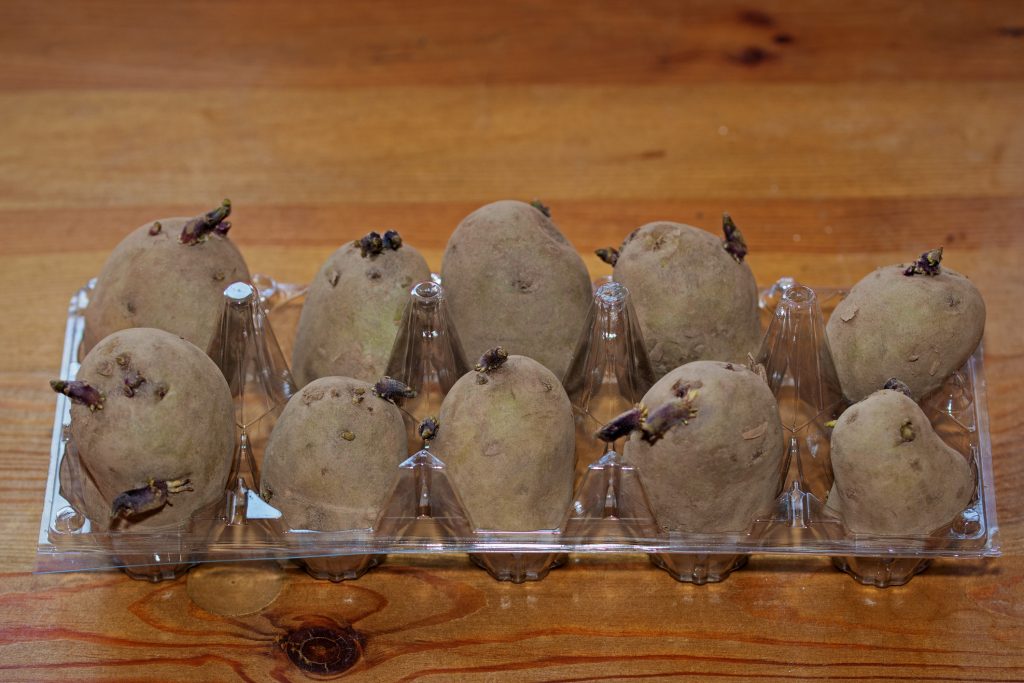 In the world of gardening and gardeners, fewer topics have caused controversy than chitting potatoes. There are those who swear by it and consider any other way of growing potatoes as horticultural blasphemy. Other gardeners consider it a total waste of time. Since we’re not taking sides, we’ll just lay the opposing opinions here and let you decide for yourself. First, we start with the obvious benefits of chitting potatoes.

Of course, there’s another side to the story. There’s a reason commercial potato growers don’t use chitting. So what are the disadvantages of chitting potatoes? Here are some to consider.

As you might have noticed, it’s not easy to get your timing right and know when the best time for chitting potatoes is. It usually takes more than just trusting your guts or putting a wet finger up in the air to check the direction of the wind.

This is more crucial if you’re planting your potatoes outdoors than if you plan on growing them in containers. Out in the garden, your young potatoes are one hail storm away from total ruin. And since the young sprouts are susceptible to drastic weather changes, you need to get your calculations right before you start chitting your potatoes.

In the cold zones where frost is an imminent threat all the way until late April, you can start chitting potatoes around mid-March or early April. As for the warmer zones between 7 and 11, mid-January sounds like a reasonable date to get your potatoes started. 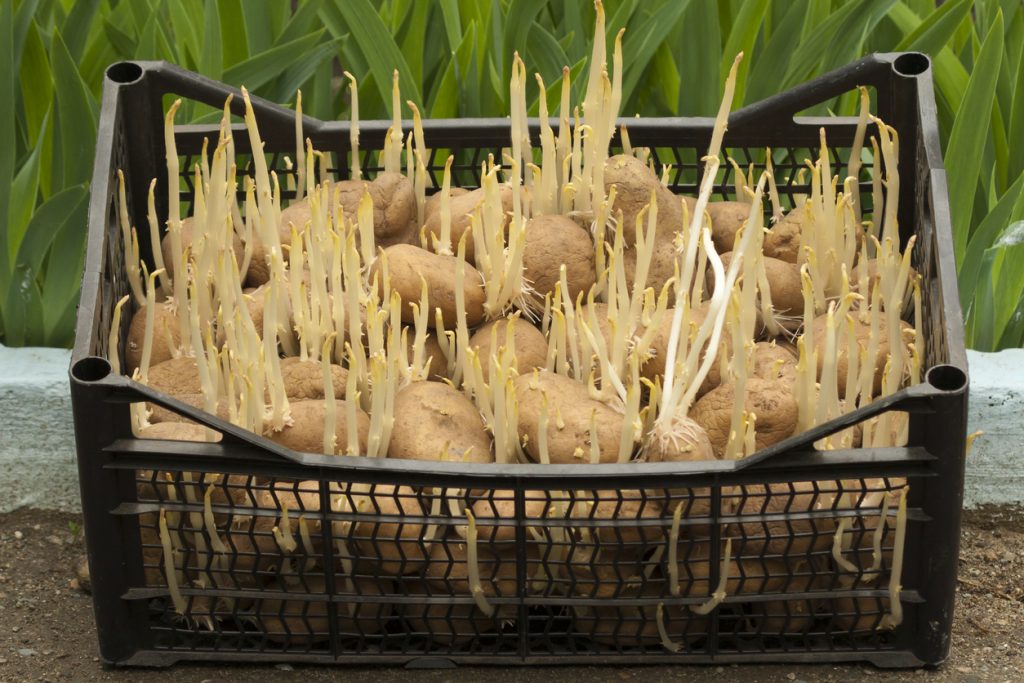 Once you have settled on the right time to start chitting potatoes, all you need are the potatoes to sprout and a container that holds them. You can get the potatoes from the grocery store if you prefer. Pick potatoes with plenty of “eyes.” Those are the shallow holes on the surface of the potato where sprouts will develop. Smooth potatoes usually produce fewer sprouts and are not guaranteed to grow well.

You don’t have to go through a lengthy process of preparing the potatoes. In fact, expert gardeners recommend not washing the potatoes at all. Just make sure the potatoes are not sprayed with any form of pesticide since those chemicals would contaminate the soil and are hard to wash away.

How to Sprout Potato Seeds

Chitting potatoes, for all of its drawbacks, speeds up the sprouting of the potatoes and makes growing these veggies less of a gamble and more of a slam dunk. Here’s how to start sprouting your potatoes in easy steps.

It usually takes between two to three weeks for the potatoes to sprout fully. But sometimes they might take longer, and as it often happens, the potatoes might not sprout at all. To trigger the dormant potatoes to start developing sprouts, you’ll need two things: total darkness and warm temperature.

To break the potato’s dormancy, you should place it in a room with a stable temperature of around 70 degrees Fahrenheit. After all the eyes have sprouted in the potatoes, you can reduce the temperature down to 50 degrees F.

Light conditions are also important here. If you keep the potato sprouts in a dim-lit room, they will grow to be spindly and fragile. So start the potatoes in total darkness, then after they have sprouted, move them to a well-lit room. You should avoid exposing the sprouts to direct sunlight since that could be fatal to them.