Call it bay laurel or just bay tree, that won’t change the fact that this is one leaf to use in your cooking and desserts. The thick leaves have an exotic aroma that single-handedly elevated Mediterranean cuisines to the status they have today. More than garlic, olive oil, and tomatoes, the bay laurel is the unknown soldier that makes your pasta, marinades, and seasonings so sumptuous and mouth-watering. 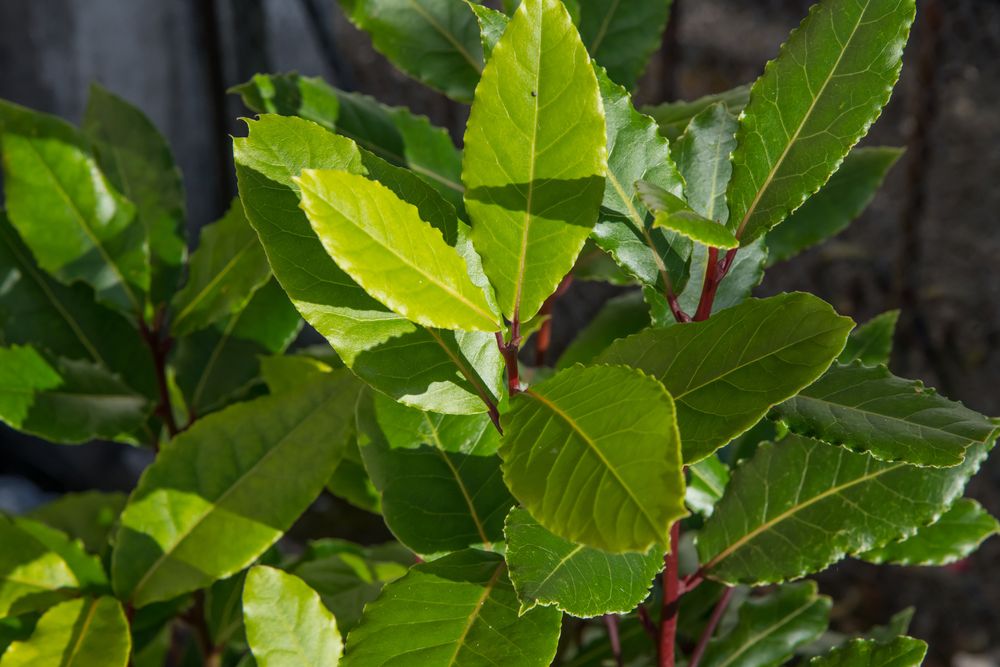 So what’s the story behind this common yet not-often-talked-about plant? Read on to find out how to grow, care for, and harvest the bay laurel in your garden.

All About Bay Laurel

Whether you treat bay laurel (Laurus nobilis) as a tree or a shrub depends on the variety you plant. Not only is it an aromatic perennial, but it’s also an evergreen plant which means you’ll keep harvesting fresh bay laurels all year round and keep the delicious dishes rolling out of your kitchen. The bay laurel goes by many other names including sweet bay, Grecian laurel, and true laurel. Many other plants are considered laurels but they don’t have the same aromatic leaves as the sweet bay laurel.

You shouldnțt confuse the bay laurel with the bay leaf tree (Umbellularia californica) since they are distinct plants.

As one of the oldest aromatic plants to feature in different Mediterranean cultures, the sweet bay had prominent standing in both Greek and Roman cuisines. Back when every aromatic plant was primarily valued for its medicinal properties, the laurel remained first and foremost a culinary plant. It is still featured in many traditional medicines as we’ll see later. 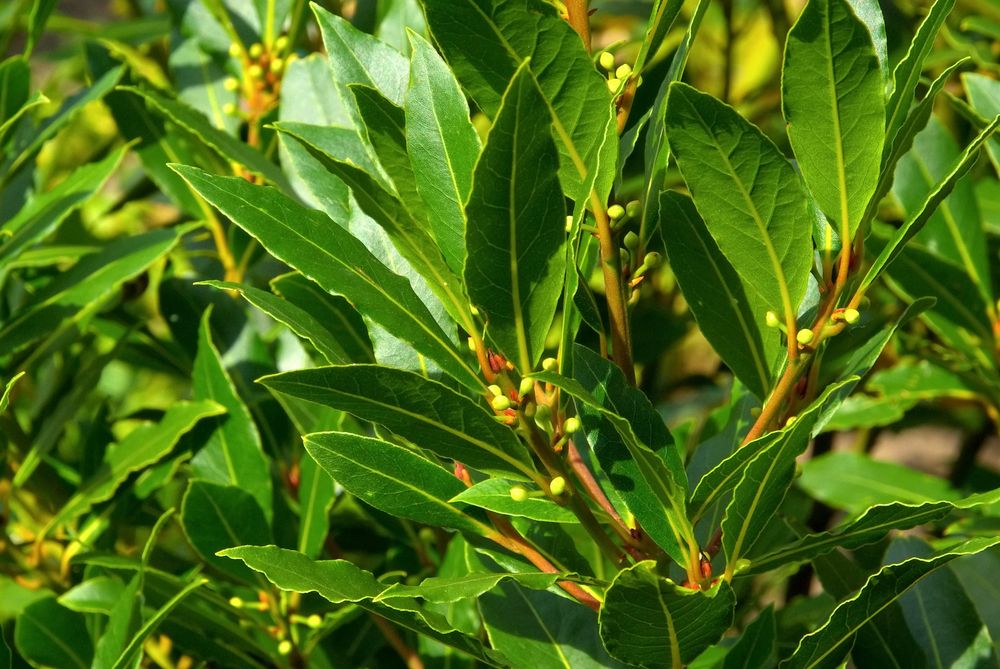 In the wild, the bay tree with its pyramidal structure can grow to 60 feet tall. However, with regular pruning and grooming you can keep it compact within 4 to 6 feet at most. This allows you to grow the tree in a container in case the weather is not very accommodating.

The bark of the tree is gray and shiny but as the tree ages, the bark turns into a dull gray. As for the leaves, they’re leathery and thick. Dark green and glossy, they shimmer in the light and their aroma spreads beyond the boundaries of the garden.

In the spring clusters of small flowers emerge. They’re usually white or yellow. But they don’t have any fragrances. Each tree carries either male or female flowers. So pollination can be challenging if you only have a single tree in the garden. After pollination, small black or purple berries develop. 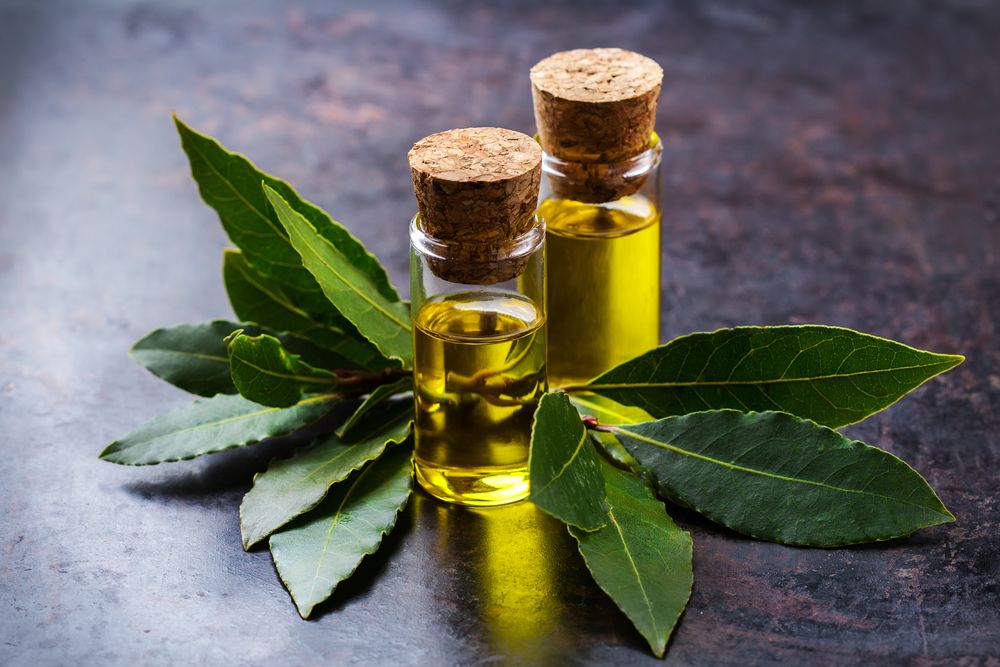 Sweet bay laurel’s claim to fame is in the aromatic leaves. Fresh, juicy, and glossy, the leaves stay green all year round. And while they’re exclusively inedible, the leaves nonetheless add an unmistakable flavor to most dishes. The fresh leaves have the best flavors. However, dry leaves are also packed with aroma and have a long shelf life.

How to Grow Bay Laurel 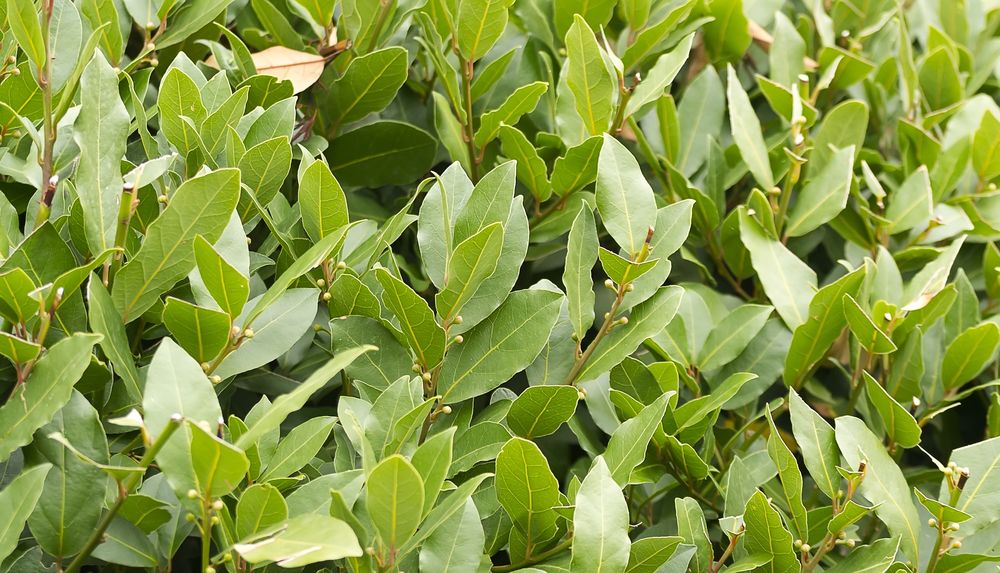 Since you can grow bay laurel in the garden or as a potted plant, it doesn’t really matter what microclimate you have. For the outdoors, you need to be in zones 8 to 10. But in cooler zones, the potted plant will need to be moved indoors when the temperature drops. Here’s how to start the tree or shrub from a cutting.

The bay laurel tree is one of those plants where you can demonstrate your topiary skills fully. Its dense foliage and evergreen nature make it an ideal decorative plant all year round. That said, the plant is toxic to pets such as dogs and cats, so you’ll need to keep it out of reach of the housepets.

If you’re growing the bay laurel in the garden, then amend the soil to improve its drainage and make it loose. Add plenty of coarse sand and turn up the top 12 inches before you plant the sapling. For container plants, it’s better to make your own potting mix since you’ll be using lots of it. The ideal potting mix for this laurel is two parts coarse sand and one part peat moss. The soil pH has little impact on the growth of the tree. It can be acidic or alkaline for that matter. So a reading between 4.5 to 8.2 would do just fine.

The bay laurel tree is first and foremost an outdoorsy plant. That means it will require a lot of direct sunlight during the day all year round. The only time you’d want to protect it from full sun exposure is if you live in a hot zone. And even then, you’ll only provide partial shade in the summer afternoons. For the rest of the year, the plant is happy to soak up the sun.

For indoor plants, keep the container on a window sill facing the south or west to get the most sunlight during the winter. After the end of the winter and when the weather warms up, you can bring the potted laurel outside. If you don’t get enough sun in the winter months, use a grow lamp instead. 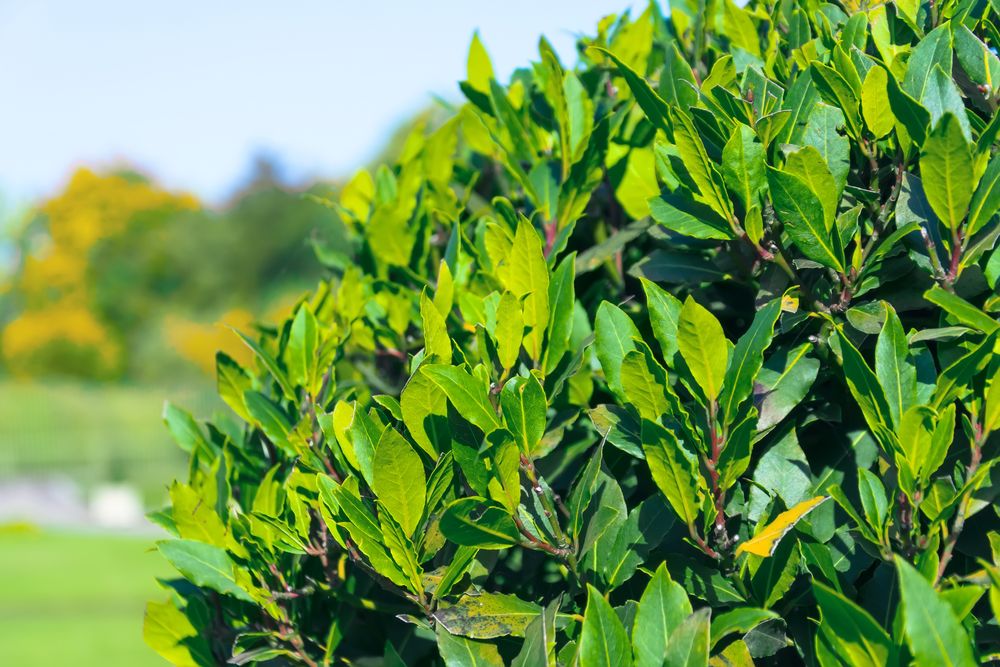 In its native Mediterranean habitat, the bay laurel enjoys warm weather all year round. This is similar to US zones 8 to 10. But it’s the winters that are most problematic to this tree. If you live in cooler zones below 8, plant it in a container and bring it indoors as soon as the temperature drops. Indoors, it can thrive in cool places as long as it’s not exposed to strong drafts.

Consider misting the plant about once a week since the humidity levels in the house are not adequate enough. If that’s not enough, increase it to twice a week if necessary. You won’t need to place the container in a shallow tray full of water though. That would be overkill.

For a tree, the bay laurel gets most of its moisture out of the topsoil. The root system of this tree is so shallow, you could damage it while weeding if you’re not careful. So when it comes to watering, the bay tree needs regular but shallow watering. Don’t allow the top one inch of soil to dry out long before you water it. At the same time, don’t overwater the tree. If you have the right soil (loose and well-draining) you won’t have trouble with irrigation. And although the tree is tolerant to drought, it is less so when it comes to waterlogged soil.

You won’t have to worry about feeding the bay laurel tree that often if at all. The tree has a slow growth rate and it will take years before it goes through the nutrient content of the soil in the garden. However, you can side-dress it with aged manure and organic compost once a year in the early spring.

The potted tree is a different story. Besides repotting it and using fresh potting mix about once a year, you’ll also need to mix in organic materials liberally with the potting mix. Once the tree reaches its second year, it will expect between 6 to 7 applications of fertilizer a year. Use liquid fertilizers at half the recommended strength.

This is where you’ll excel and let the inner artist in you come out. The bay laurel has dense foliage and is a very forgiving plant. That means, if you cut too deep or make a mistake, the tree will simply grow back and cover your mistakes.

You can create just about any shape with your tree foliage. Balls, boxes, or animal heads are all on the menu. But even if you just want the tree to retain its natural shape, pruning is a crucial task that keeps the large tree manageable. This is especially true if it’s a potted plant. It’s a lot easier to move a 6-foot plant in a container than one that towers over 60 feet.

No known disease affects the bay laurel. The evergreen tree keeps its green luster all year round. As for pests, only scales and moths seem to have a taste for its leaves. Since the leaves are edible, you’ll have to resort to manual treatments to get rid of these pests.

Moths often fuse two leaves together with some white fluff and lay their eggs between them. Cut off the glued together leaves and get rid of them safely. As for scales, just spray them with neem oil to get rid of them. 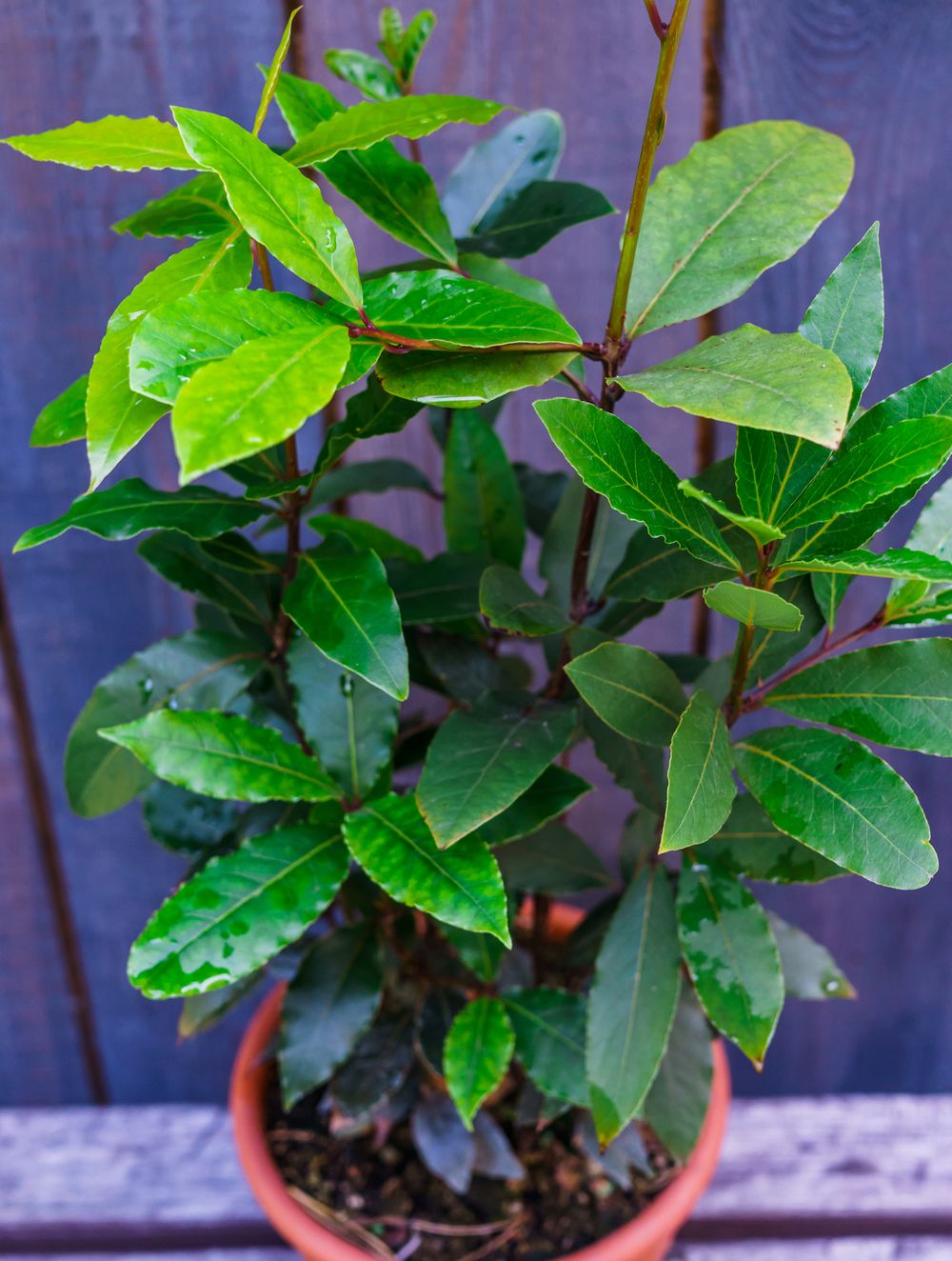 Although the tree will start producing dense foliage a few weeks after planting it, you should let the leaves be for the first year. Harvesting should start around the time the tree reaches its second year. It’s an evergreen tree, so there are always more fresh green leaves whenever you need some.

You need to cure the leaves before using them in your dishes. Spread the leaves on a paper towel in a dry room and let them dry for about two weeks. You can also store the cured leaves at room temperature for up to a year.