Fewer fruits have as many cultivars and varieties as the apple. Popular in jam, juice, smoothies, and pies, the apple is undoubtedly a fruit for all tastes. Just drop the word “apple” in Google, and you’ll end up with thousands of recipes that cover everything from desert to roasted pigs.

Apple varieties are a dizzying world of their own. Apples come in a whole variety of colors, sizes, and flavors. And while some people have their favorite apple varieties, they’re most likely limited by the options at the grocery store.

But for a gardener, these limits don’t exist. Regardless of what the local supermarket has to offer, you can grow just about any apple variety as long as it suits your hardiness zone. Here are the top apple varieties to choose from. 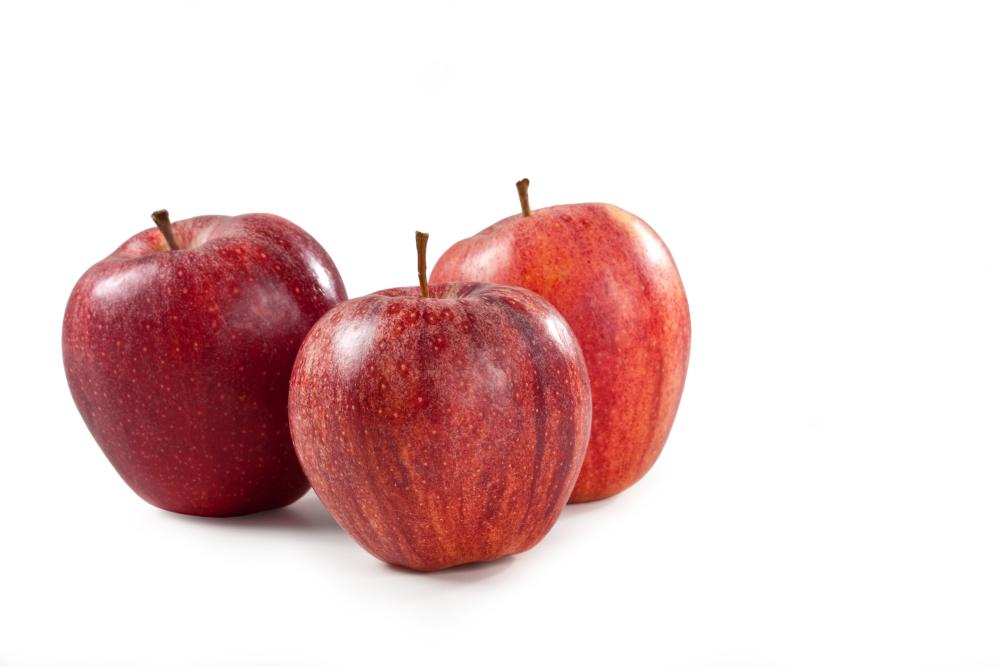 This is by far the most popular of all apple varieties. When you picture an apple in your mind or think of a generic apple, the Royal Gala is the first thing that pops in your mind. It’s a crossbreed between the Golden Delicious and Kidd’s Orange varieties. The ripe apple has smooth skin with a bright red color on a yellow background. It’s a mid-size apple that serves as a delicious snack.

The flesh is crunchy and has a creamy color. The ripe apple has a sweet aroma. The cone is small and contains four chambers. Each chamber has between 2 to 3 brown seeds. Royal Gala is rich in vitamin A and carotene with great benefits for the cardiovascular system. It has low acidity compared to other apples and is mildly sweet. The apple ripens in mid-August and stays fresh outside of the fridge for about 6 months. 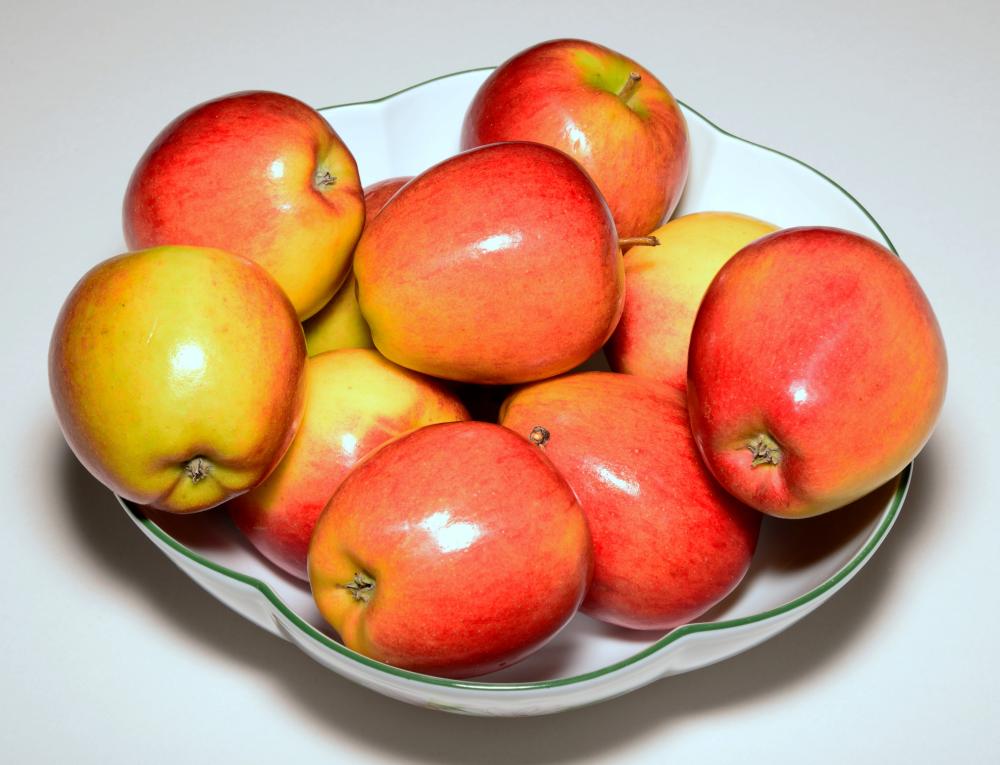 Another aptly named apple variety that releases a cacophony of herbaceous flavors in your mouth with just one bite. This is no hyperbole. The Jazz combines the aromas of herbs with the crunchiness of apples with a dash of tartness, thinly veiled with a dose of sweetness. And it doesn’t get old. The more you eat this apple, the more nuanced the taste and flavors get.

So what’s the story behind this Jazz cultivar? It’s a crossbreed between the Braeburn and Gala cultivars and is more than the total sum of its parents.

It’s one of the advantages of crossbreeding such pliable and easily adaptable fruits such as apples. They usually produce a cultivar that transcends both parents and creates new flavors never imagined before. And it’s all right there on the skin of the apple. You can see the dominating flavor by looking at the ripe Jazz. With red covering almost all of the apple, that’s the sweetness and acidity combined. The green, yellow, and golden colors near the top are the herbal flavors that make this a legend among apples. The Jazz ripens in mid-September and stays in the market until April. 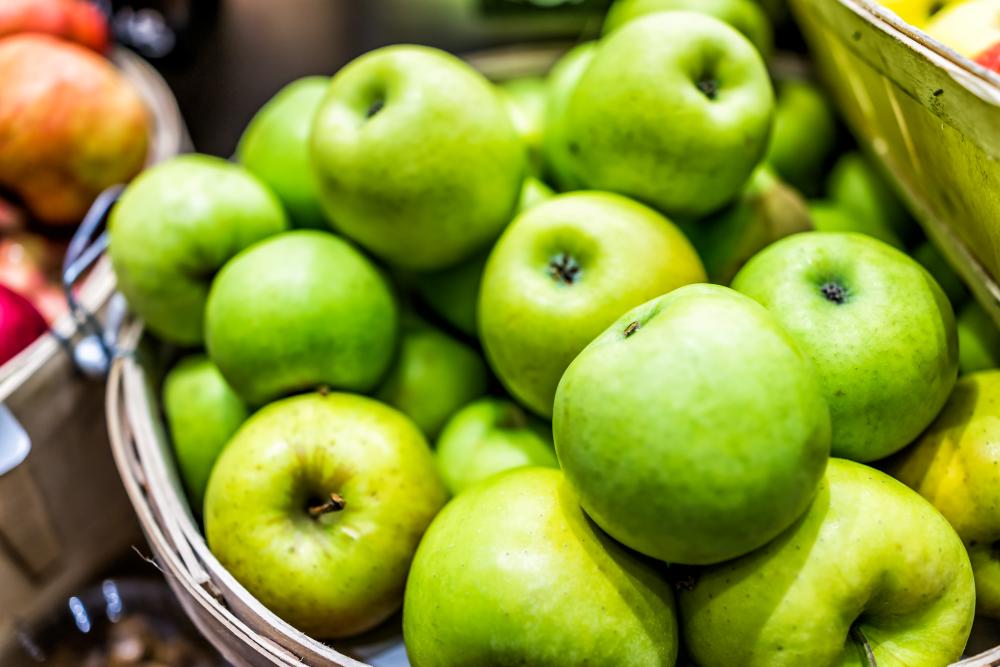 Not all apples are sweet. Some apples, when you bite them, they bite back. The Granny Smith is one such apple that makes all your taste buds howl in protest. But despite its lack of sweetness, this large-sized apple packs a lot of energy. Many athletes include it in their daily diet because it’s easy to digest, and it releases a lot of energy fast. Some people attribute memory strengthening properties to the apple, but scientific research is on the fence regarding that health benefit.

The Granny Smith maintains its bright green color even when it’s fully ripe. The difference between a ripe and an unripe Granny is how bright the ripe one is. The average apple is medium to large with very crisp white flesh that’s full of juices. It can be eaten raw, in fruit salads, or blended into a healthy smoothie. The first Granny Smith was developed in 1868 and immediately became a sensation in a saturated apple market. It ripens in September and has a long shelf life. 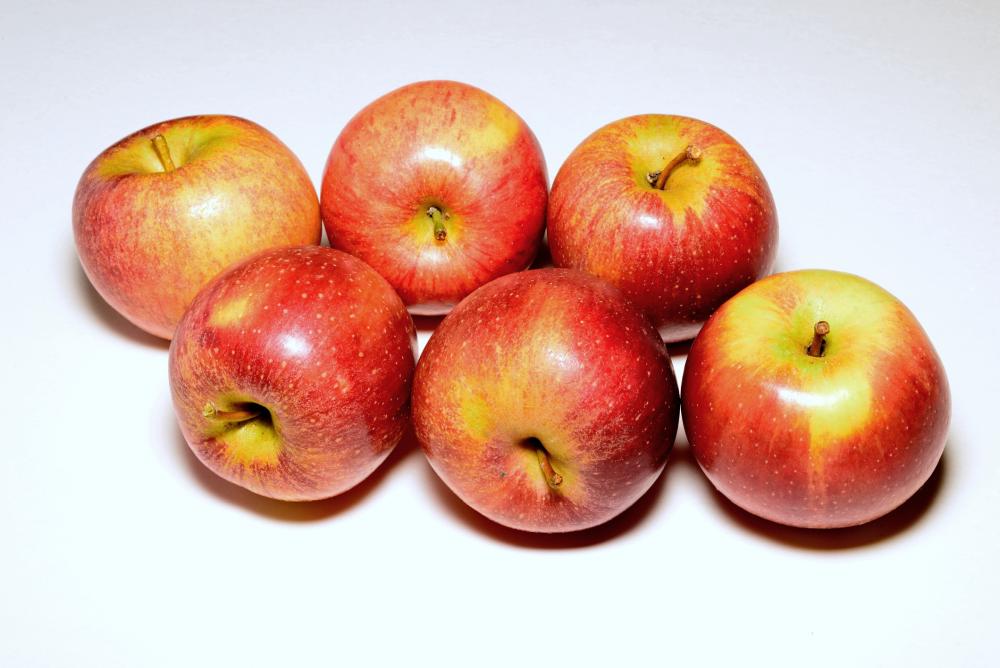 The Braeburn is a relatively new addition to the apple varieties. The first cultivar was developed in 1952 by crossbreeding Lady Hamilton with some random cultivar. But the new cultivar proved its mettle when the first ripe apple turned out to be a resounding success. The skin is scarlet red but looks dark red in certain light, and golden veining cut through the red blocks of color in random patterns. It has a glossy look, and the skin is smooth.

The mature apple is medium-sized with an elongated shape like an El Greco painting. The pulp inside is creamy, firm, and crunchy. The ripe Braeburn strikes a good balance between acidity and sweetness, so while it won’t overwhelm you with its sweetness, the after-taste is still pleasant in your mouth.

You can eat it raw, cook it, or bake it. If you love apple pies, this is the apple for your pie. And unlike other apple varieties, the sliced Braeburn doesn’t lose its creamy color quickly because of high concentrations of vitamin C. 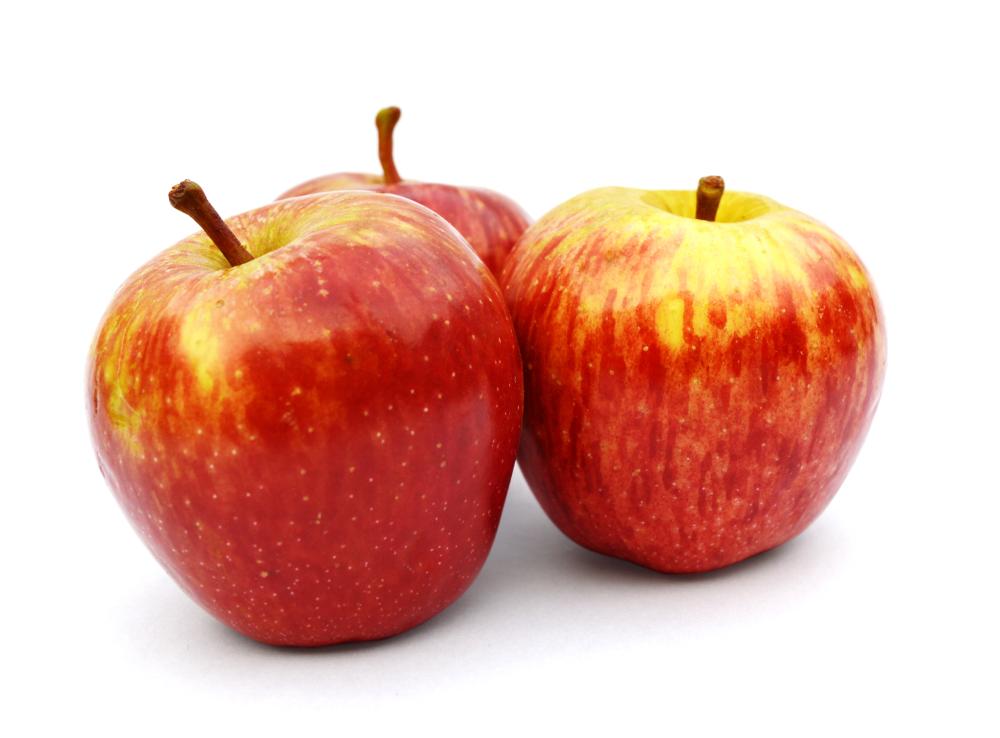 Fuji is the result of crossbreeding Delicious and Roll’s Janet. And it first appeared in 1939. It’s a late apple that ripens on the tree sometime in October. But this delay and patience-testing are well worth it. The ripe Fuji is pure sweetness, and since it’s quite crunchy, you’ll enjoy eating it raw just to feel that firm flesh break on your tongue.

The apple has low acidity content, and its high sugar concentration makes it ideal for snacks and fruit salads. However, the sugar breaks down quickly when baked or cooked. In addition, the Fuji loses a lot of its flavors and aroma when heated up, so you should eat it as a snack to savor all its flavors.

The Fuji has a rosy color that ranges from light to dark with some green veining. The flesh is rosy or creamy-yellow. It’s medium to large and is often sold in select grocery stores, usually with a steep price tag attached to it.

Nothing says tropical, exotic, outlandish, almost surreal in the culinary circles like a bite off the Civg198. A crossbreed between the Gala and Liberty, this heirloom cultivar proved to be a resounding success. It might be hard to get your hands on the seeds since it’s a copyrighted cultivar, but it’s well worth the trouble.

The mature Civg198 reflects different shades of red with tiny golden spots that make it look like a massive galaxy replete with stars and black holes. You can easily detect hints of litchi after the third bite. As for the skin, it very well reminds one of mango.  But what makes this a really outstanding variety is that you can also cook it and bake it without the apple losing much of its flavors and aromas.

It’s rare for an apple to do well both as a fresh snack and stuffed in an apple pie. But the Civg198 shines in whatever culinary setting you place it in. It ripens in early September and stays fresh until June of the next year. 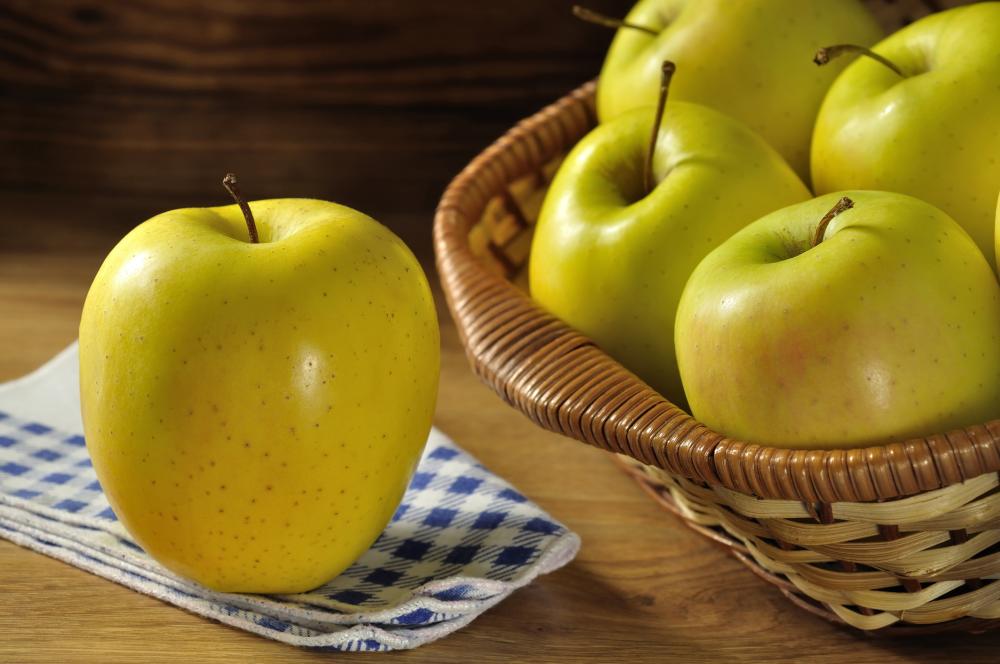 Yellow apples have been around long before the red varieties. However, it’s the red apples that tend to catch the eye and make the mouth water. The Golden Delicious is here to prove that yellow apple varieties are just as tasty, crunchy, sweet, and aromatic as their red counterparts, if not more.

First cultivated in 1890, the Golden Delicious is no spring chicken and has had ample time to prove its worth and establish a solid reputation. In fact, this apple acquired a reputation as an anti-aging apple that keeps the skin taut and supple. Whether the Golden Delicious deserves this reputation or not is for medical research to find out. But one thing is sure, the apple is a favorite by many people of all ages.

While it’s sweet, it has a good content of fruit acid that balances the taste. Its aroma and flavors make it almost melt on your tongue. The ripe Golden Delicious reflects many colors ranging from yellow-green to golden yellow. Its flesh is slightly creamy yellow and has a fine texture. It matures in mid-August and stays in the market until April of the next year. 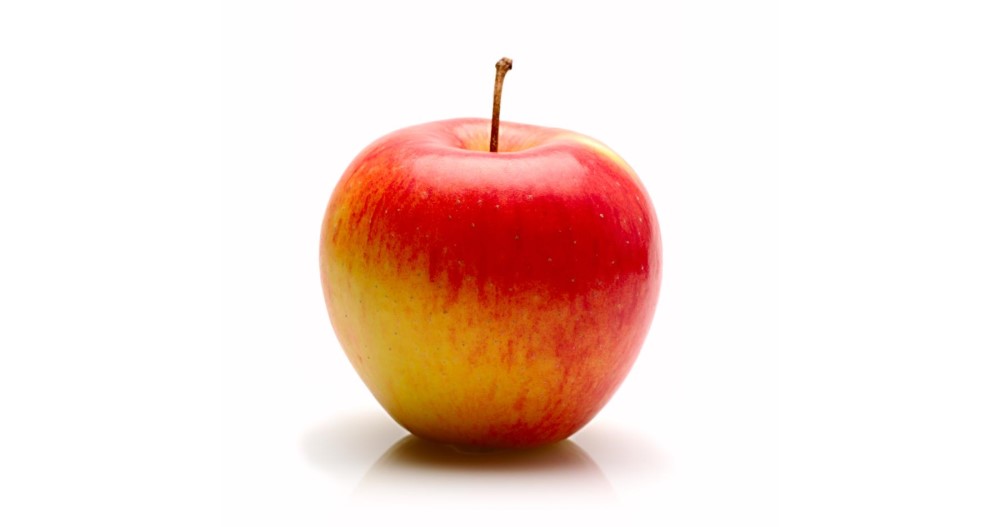 The Pinova is a festival of tastes and aromas that mix in your mouth and release endorphins of happiness and satiety. More so if you eat the apple fresh, like say, off the tree in your backyard as opposed to in a crate in a supermarket where it has been stored for months. The Pinova is one of those apples that don’t like to be cooked or baked. All the flavors are ready for release as soon as you bite into its smooth and blemishless skin.

As a crossbreed between the Golden Delicious and the Clivia, the Pinova is a unique cultivar in terms of taste and color. It has a refreshing taste due to the acidity slightly overshadowing the sweetness. It’s also packed with nutrients and energy, and you’ll reap the benefits if you make it part of your daily diet.

The firm and juicy Pinova has a greenish background with splashes of red and golden yellow across its smooth contours. It matures at the end of September but has high resistance to diseases and pests, which ensures a good yield every year.

The Bonita is just as cute as its name. The bright red apple has got it all. It’s crispy, aromatic, tasty, and full of vitamins. One can hardly ask for more from a medium-sized apple with such glossy red skin.

A chance mixing up of seeds led to this unexpected treasure. Two cultivars are responsible for the Bonita. They are the Cripps Pink and Topaz. This is what Bob Ross would call a happy accident. The ripe apple looks like a ruby glowing from the inside. The skin feels almost unreal, and the flesh is cream-colored.

In terms of taste, this is not the sweetest apple in the market. But sweetness is overrated. One often needs a tarty tang to stir up the appetite, and the Bonita is a good choice for an appetizer. It matures in mid-September and appears on the shelves of upscale stores only between March and April. Growing this apple variety ensures you’ll have a good supply of its ruby orbs all year round. 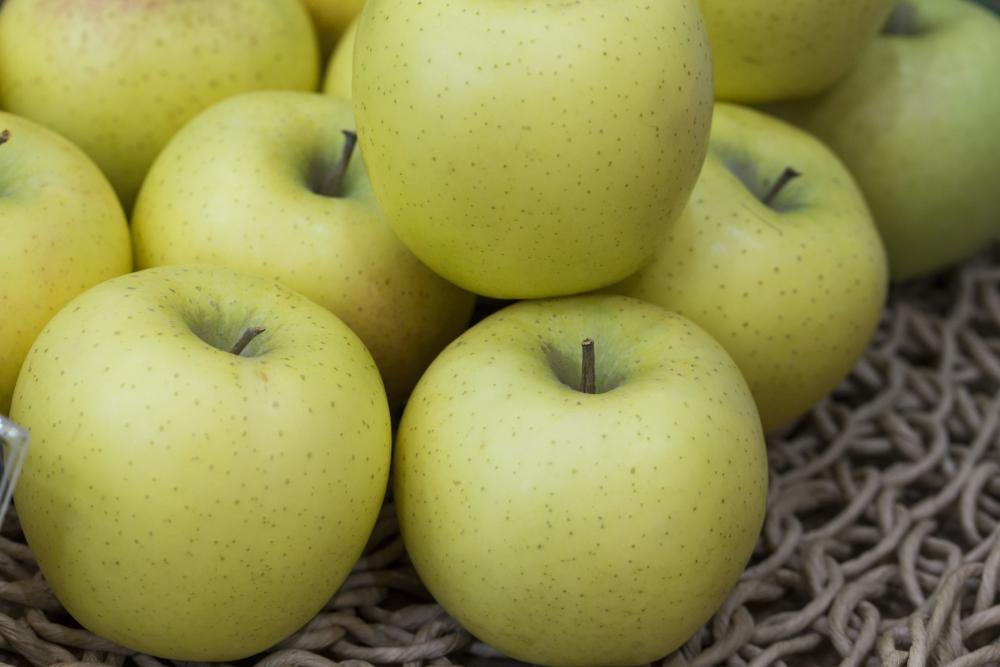 Another heirloom cultivar that is quite hard to find. But the Shinano Gold lives up to its name and delivers a crunchy juicy punch with every bite you steal off the ripe apple. It’s the result of crossbreeding Senshu and Golden Delicious. If you have noticed, the Golden Delicious is the parent to so many apple cultivars, and for a good reason. It has the right texture and acidity/sweetness balance.

But the Shinano Gold excels over both its parents in terms of flavors and crunchiness. Its pure skin is all yellow without a single blemish. It matures in late October and becomes available for sale between October and March every year.

How to Store Apples to Keep Them Fresh Longer

Apple Tree Care – How To Grow And Harvest Apples

Breadfruit Varieties That Do Well In The Garden