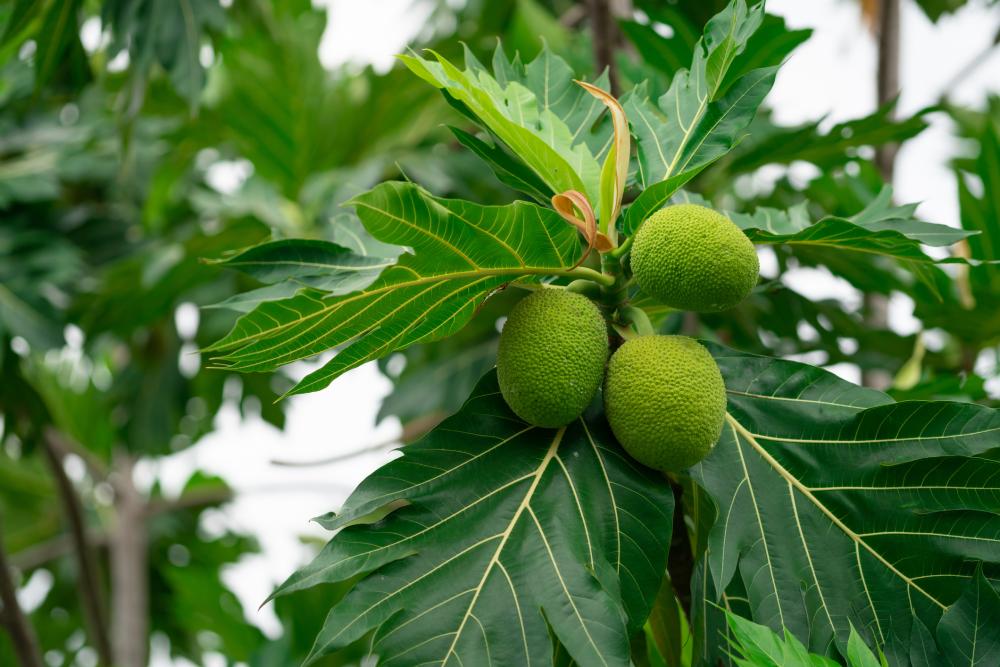 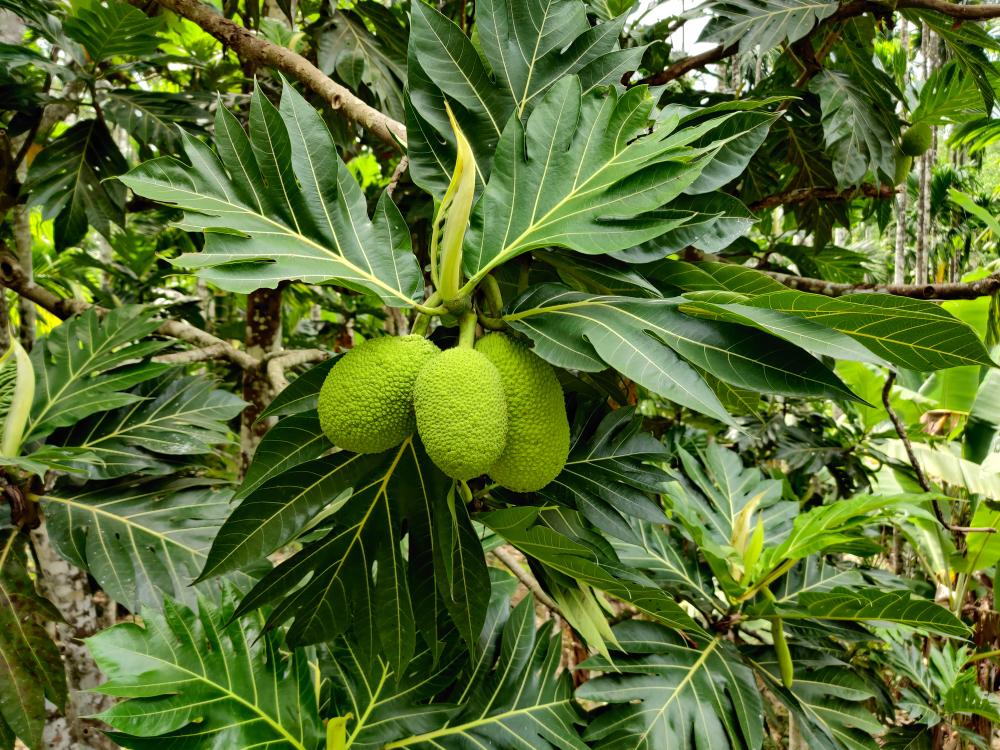 It’s no secret that breadfruit trees have saved whole communities from starvation. This is especially true of tropical islands such as Hawaii and Fiji where grains are not readily available. It is estimated that an average breadfruit tree can feed a family of 4 for up to 50 years. With proper care and maintenance, the tree can continue to produce its nutritious fruits for the next 100 years without fail. 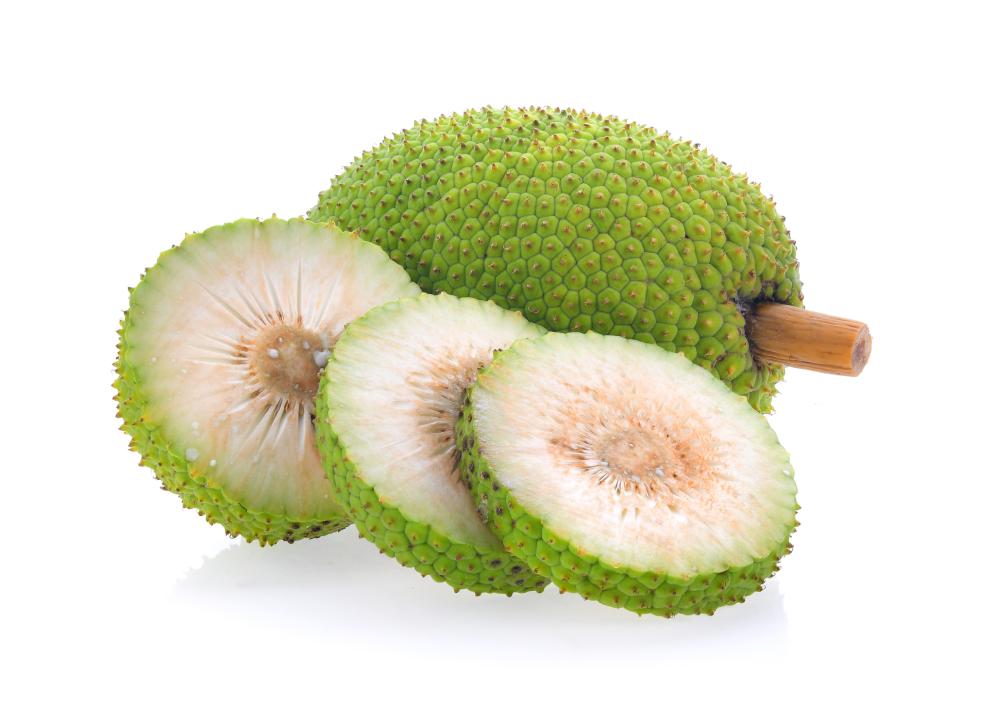 And for such an important tree in the lives of many communities, many breadfruit varieties exist in the wild. Not to mention the many cultivars that were developed to give the tree more tolerance for adverse growing conditions and make it more resistant to certain diseases. So when you want to plant a breadfruit in your garden, you’re faced with the challenge of deciding which variety is better for you.

We did the research so you don’t have to and the result is the list of the top breadfruit varieties below. Read on to find out which variety is good for your garden.

Not only does Fosberg (Artocarpus altilis) is a good substitute for bread, it even smells like it. When roasted or baked, the aroma wafting out of the fruit is very similar to the smell of fresh bread. This gives you an idea of much fiber and carbohydrates each breadfruit has. And since the starchy fruit is gluten free, people with gluten intolerance can use it as a viable substitute for wheat-based bread and other gluten-loaded products.

Originally from the South Pacific, Fosbery has spread across the Pacific Ocean one island at a time. As islanders colonized new islands, they brought with them their staple food and planted the tree wherever they found good soil. This allowed more cultivars to grow and in each new island, the tree got a new name.

Some of the names this breadfruit is known for include bia, bulo, nimblau, meduu, kuru, rimas, and buco among others. But with the different cultivars, all trees seem to have more or less the same qualities. It was first introduced to the Caribbean islands in the early 18th century. From there the Fosberg spread to Australia, South America, Sri Lanka, and Madagascar. Today, this breadfruit tree can be found in over 90 countries around the world.

The reason for the popularity of the Fosberg is that it is easy to grow and also provides food at all stages of the fruit’s development. You can start to eat the fruits when they’re no bigger than a tennis ball. Even the seeds of the mature fruit are edible and provide plenty of nutrients.

The mature tree grows to about 60 feet tall. It’s an evergreen type and keeps its lush green leaves all year round. The dense canopy offers shade in the summer and the leaves are long and broad measuring about 20 inches long.

The fruits of the Fosberg can be round, oval, or oblong. The mature and ripe fruit can weigh up to 13 pounds. Sometimes the skin is spiny but most often it’s smooth. When the fruit is ripe, the skin turns yellow or greenish-yellow. As for the flesh, it’s either pale yellow or creamy white with strong flavors and a bunch of seeds surrounding the core of the fruit. On average, the fruits mature and ripen within 15 to 20 weeks.

Originally, Blanco (Artocarpus camansi) first inhabited New Guinea and the Philippines before it too spread across the tropical regions of the world. And while in the wild it’s favored by birds and bats that feed on its fruits, Blanco is also an ideal breadfruit tree to grow in the garden. However, it’s mainly grown as an ornamental plant since its fruits are packed with seeds that take up a large part of the fruit and leave little room for the flesh.

If you want to grow Blanco for its fruits, then you’ll need to grow the seedless cultivars that were crossbred from this tree. They maintain the top qualities of the tree but produce more fleshy and seedless fruits. And as with other breadfruit varieties, Blanco goes by many names in different countries. Its alternative English name is breadnut, but in the Caribbean, it’s known as chataigne. Other names include kos del in Sri Lanka, pana de pepitas in Puerto Rico, and kapiak in New Guinea. Today it grows abundantly everywhere from South America to West Africa and Southeast Asia.

Similar to Fosberg, a mature Blanco tree can reach 60 feet tall in the right conditions. It has large broad leaves and the fruits turn dull green when ripe. The fruits are either round or oval and are packed with seeds. In fact, the seeds of the Blanco are more nutritious and delicious than the flesh. The seeds look and taste like nuts which explains the name ‘nut bread’.

As with other breadfruit varieties, you can consume the Blanco fruit at different stages of development. The young fruit with the tiny undeveloped seeds is good for soups and stews. The ripe fruit has large nut-like seeds that you can be roast and eat as a snack.

Between the glossy leaves and bizarre-looking fruits, Chebiei (Artocarpus mariannensis) deserves a place in your garden. Originally from the South Pacific, the tree and its many hybrids remained mostly in that part of the world. The reason this breadfruit didn’t spread to the rest of the world as other varieties is the small fruit which has between one and two large seeds. It’s safe to say that the fruit is nothing but seeds with little morsels of flesh to cushion them.

The Chebiei thrives in limestone but new cultivars were developed to make the tree more adaptable to atolls and coastal areas where the soil is mostly sandy. These hybrids can tolerate saline soil as well making them ideal for small islands.

If you’re growing this variety for its fruit, you might look at the different seedless cultivars since you won’t get enough flesh out of the seeded varieties. However, this is one tree that needs plenty of space in your garden or backyard. It grows over 60 feet tall with a massive canopy and a trunk that surpasses 6 feet in diameter.

And because of their tolerance for salinity, you can grow them along the coast where most likely they will be the only trees in sight. The glossy green leaves are dissected and lobed while the fruits are medium-size and weigh about one pound at maturity. The skin of the fruit is rough and it remains dark green even when fully ripe.

The flesh of the fruit is sweet although you won’t get much flesh out of the breadfruit because of the seeds. But even if the fruit is not fleshy, it still has a unique and lumpy shape that is highly decorative if nothing else. The skin of the fruit like the leaves is glossy green and the flesh inside is creamy yellow. The small fruit grows to about 5 inches long when fully mature. We recommend seedless varieties such as Meinpadahk which have a better yield than the seeded varieties.

This cultivar grows mainly in Natewa Village in Fiji. Although it’s not easy to get your hands on the seeds or a sapling of the Lasawa cultivar, it’s worth the trouble you go to. The fruits of the cultivar are seedless and fleshy. The aromatic flesh is white with a slender core in the middle of the ripe breadfruit.

The fruit is either round or oval and weighs less than 4 pounds on average. It doesn’t change its color and remains light green from the moment it develops until it’s fully ripe. But the dense flesh makes up for the relatively small size of the fruit. And with its famous high yield, you’ll have plenty of fruits out of a single tree every season.

The leaves are also very ornamental with their glossy green surfaces and heavily lobed structure. Each mature leaf grows to about 25 inches long and about 13 inches wide at its broadest point. The base of the leaf has the distinct shape of a V and each leaf has 7 lobes. The lobes are pointy and the veins are light green which complements the deep green of the rest of the leaf.

Another cultivar that grows mainly in Fiji. The flesh of the ripe fruit is less dense than other more popular breadfruit varieties. There’s also one large seed near the bottom of the fruit. Despite these flaws, the flesh of the Liva fruit is more aromatic and sweeter than other cultivars that grow in Fiji. The nutritious cultivar has decent amounts of iron, protein, and manganese.

The ripe Liva fruit is usually oval with smooth skin and weighs about one and a half pounds on average. Both the skin and flesh inside are pale yellow. You can harvest the Liva fruit throughout the whole year and as long as the growing conditions are favorable, the tree continues to produce fruits for up to 50 years.

The Liva cultivar is also quite ornamental. Besides the shade it offers with its large canopy, the leaves are glossy green and sparkle in the sunlight. Each leaf averages about 20 inches long with 8 lobes on both sides. At its broadest point, the leaf measures 12 inches wide. The deeply veined leaf is dark green with light yellow veins. Although thick and meaty, the leaves are quite flexible and have a smooth surface on both sides.

The Uto Vola cultivar stands out with its large fruits and ornamental foliage. The fully ripe fruit weighs around 6 pounds and is either round or oval. The skin is usually light green and doesn’t change even when the fruit is ripe. The flesh is white that turns yellow-white at maturity. It’s moderately dense with thick veins bisecting the flesh at regular intervals.

The harvesting season of Uto Vola starts in April and continues until September. The tree doesn’t fruit again until April of the next year.

As for the leaves of the tree, they tell a different story. Large, broad, and glazed, the leaves are an impressive asset of this cultivar. The mature leaf can grow to about 27 inches long and has a width that matches its length. At its widest point, the leaf can be one foot across. With seven lobes cutting across the length of the leaf, it also has a V-shaped base. The deep veins add another ornamental value to the leaf with their light green color and complex structure. The leaf is quite flexible and has a smooth surface that reflects the sunlight.

Although many breadfruit varieties didn’t make it on this list, those cultivars we covered give you a fairly good idea of what an exotic tree the breadfruit is. Granted, some of those cultivars are not easily available in your local nursery. However, they are a great addition to your tropical garden and add an exotic flair to any landscape.

6 Breadfruit Growing Problems And How To Solve Them

Breadfruit Care – How To Grow And Harvest Breadfruit