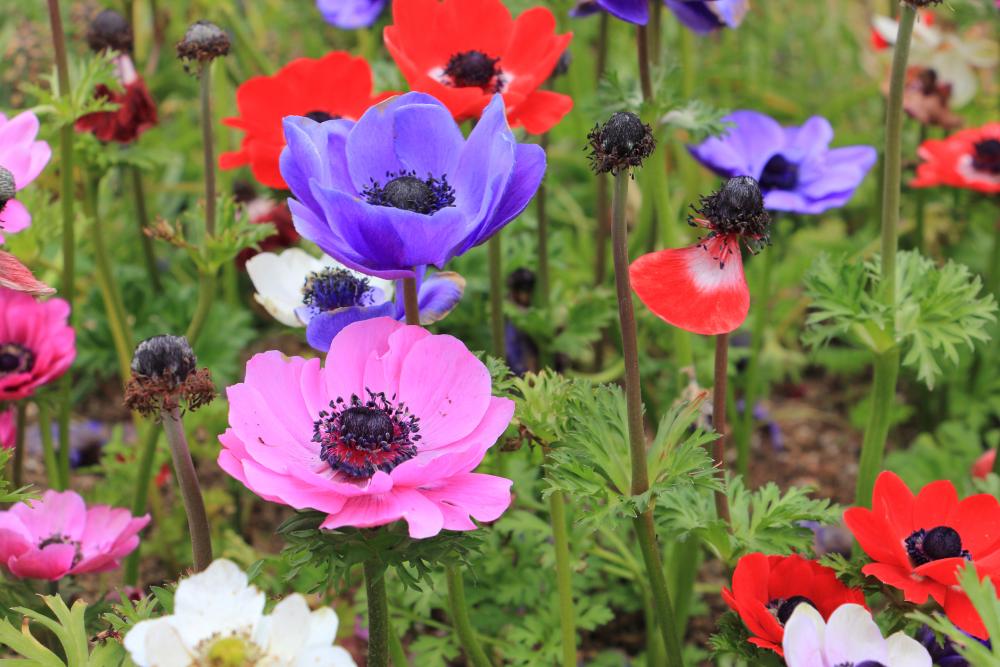 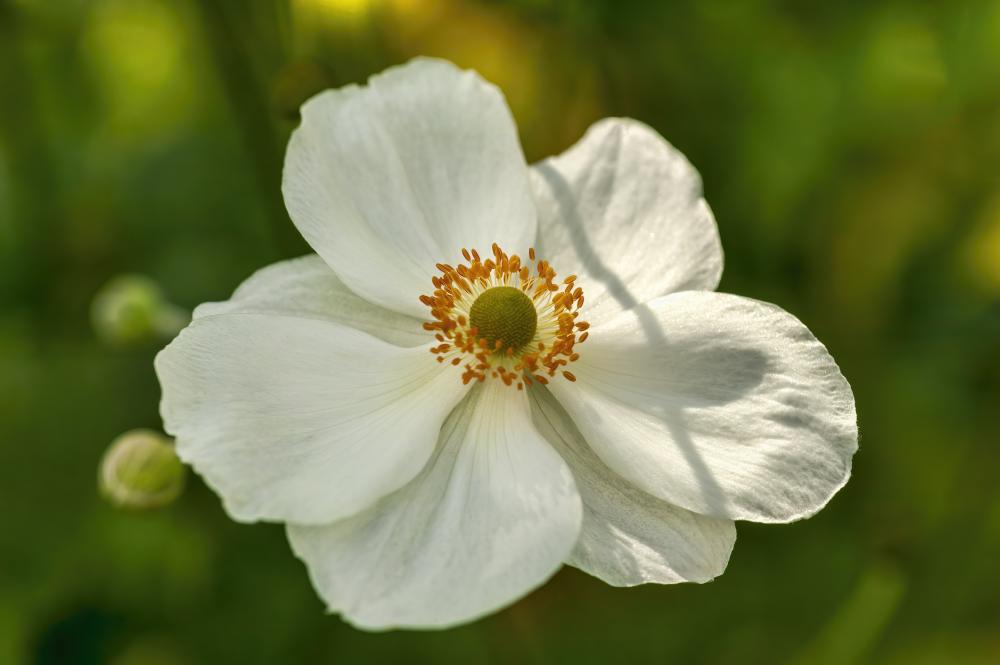 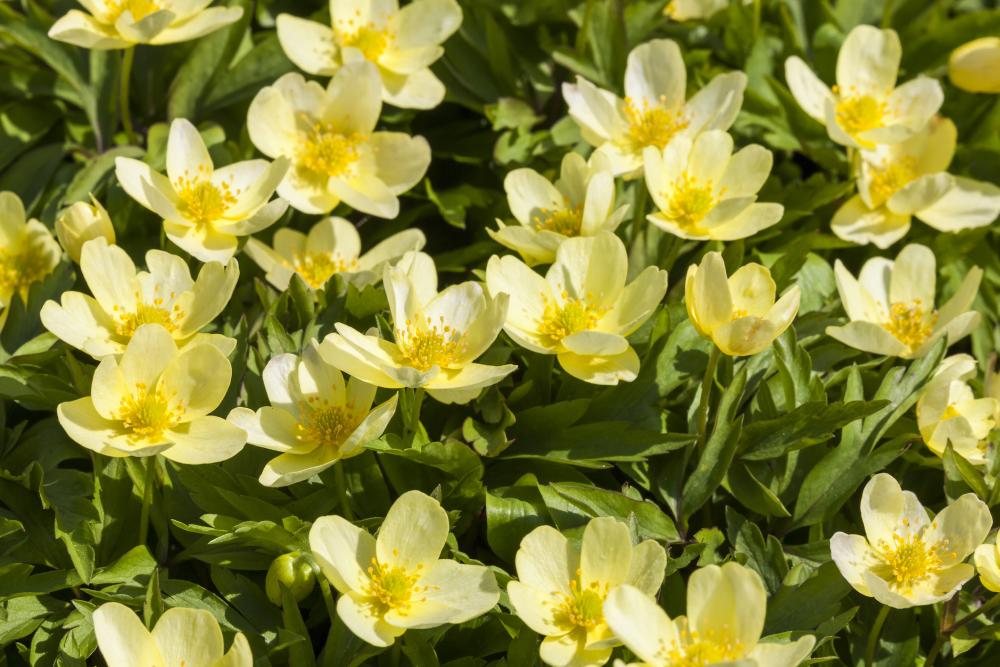 The humble anemone does a good job turning a garden into a festival of colors. And since anemones like to be grown in large patches, chances are you’ll want to plant more than one anemone species in the garden. Luckily, anemones come in a wide variety of colors and sizes, so you won’t have to worry about having identical anemones all in the same color. 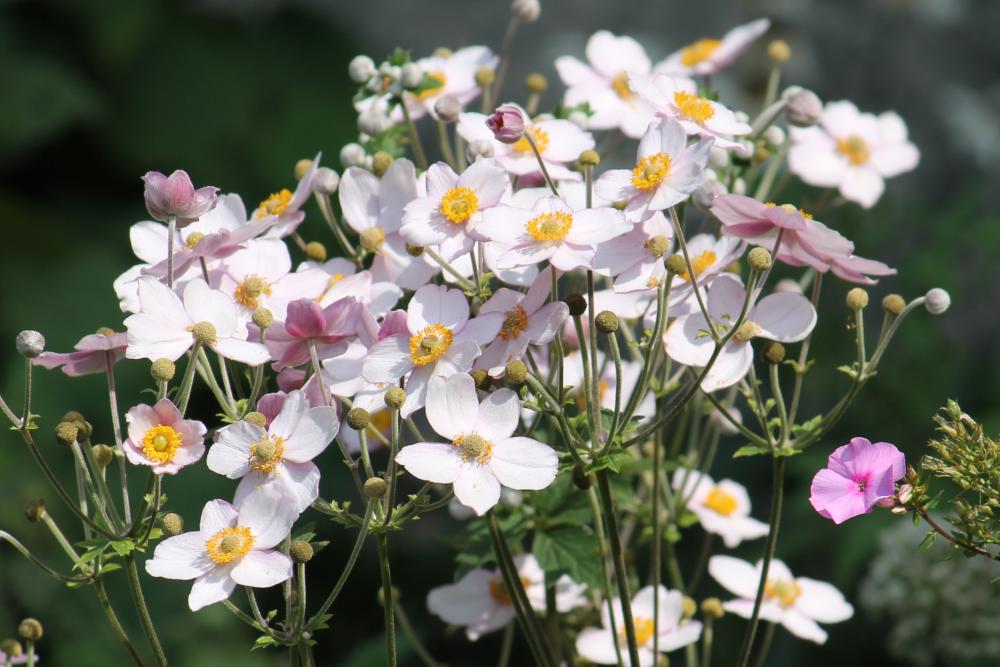 The best part about anemone varieties is that almost all of them are suitable for the garden. These hardy flowers have adapted to different climates and growing conditions. So even the species that are not native to North America will not have trouble adapting to the soil and weather.

De Caen Anemones (Anemone coronaria) look more like poppies than anemones. The prevalent color is maroon or purplish-red with a white center and dark disc. This cultivar was first developed in France in the 19th century. So it had a long time to establish itself and develop a strong fanbase.

In the US, you can plant this anemone as a perennial in zones 7 to 10. You can still grow it in cooler zones but only as an annual. In warm zones, you should plant it in the fall since it prefers cool seasons. But as long as the summer isn’t very hot, you can start it in the early spring and get blooms throughout the spring and early summer. It needs between 6 to 8 hours of full sun every day for those rich colors to shine. It grows to 24 inches in the right conditions.

a
Queen Charlotte (Anemone x hybrida) is a hybrid of Japanese anemones that was developed in China. It has a royal appearance with ruffled petals with creamy yellow background and red blushes around the edges. One of the main features of this cultivar is that it’s a late bloomer. The flowers open in the late summer around August. By then, all other anemones and flowers in your garden would have died out.

Another advantage to growing Queen Charlotte is that it requires little care and maintenance. The hardy cultivar takes care of all its needs, and if you get enough rainfall in the summer, you won’t need to water the plant. It’s suitable for zones 5 to 8 and grows to about 3 feet tall. So it sure will dominate the other anemones in the anemone patch. The cultivar thrives both in full sun and partial shade. However, in zones 7 and 8, it’s recommended to grow it in partial shade since the afternoon sun of August would stress the plant and cause it to wilt.

Mr. Fokker (Anemone coronaria) is a cultivar that belongs to the De Caen group. It is mainly a purple flower with a deep blue center. This is the cultivar that will steal the lights in your anemone patch. The flowers are large, showy, and have bright colors. The deeply veined petals of the flower show all their splendor when the sunlight falls on them.

The mature plant grows to about 9 inches, so it makes for a colorful ground cover. Like the rest of the group, which was first developed in France, it’s suitable for zones 7 to 10. Here you can grow it as a perennial plant that will flower every spring. In zones 4 to 6, it will bloom as long as it gets enough sunlight during the growing season. Because it can’t tolerate the cold weather of the winter, the plant usually dies in the fall.

Honorine Jobert (Anemone x hybrida) is a delicate cultivar that is as romantic as its French name suggests. Despite the name, this cultivar was first developed in China. The flowers are white with yellow centers and greenish discs. It’s a hybrid of the Japanese anemone and is also a late bloomer. Plant it with Queen Charlotte to create a ravishing color combination and have more than one flower blooming in the late summer.

The cultivar grows to anything from 3 to 4 feet high, so it’s a good candidate for the back rows in your anemone patch. It’s best suited for zones 4 to 8 and can grow well in partial shade as well as full sun. Although you should protect it from the full sun in warm zones to avoid wilting issues. It prefers well-drained soil with a special affinity to loamy soil. Keep the soil pH close to neutral, although slightly acidic soil will boost the growth and improve the disease resistance of the cultivar.

Hollandia (Anemone coronaria) is another De Caen cultivar. It has cherry blooms that are captivating. The slim petals are red cherry at the top and white at the bottom. The center is dark red. It is a spring flower, so make sure to start it early in the spring. If you have a short spring and it turns into summer quickly, you can start the seeds indoors about 6 weeks before the last frost. Transplant the saplings to the garden when the soil temperature rises above 55 degrees Fahrenheit. The soil needs to be loamy or sandy. Clay soil retains water and doesn’t allow the sensitive roots to grow and spread out. This cultivar goes well with Mr. Fokker as well as the other De Caen group that we cover below. It too requires full sun and needs between 6 to 8 hours of daily sun during the growing season. The mature plant grows to 10 inches high, so plant it in the front of the patch and let taller anemones grow in the back.

Hadspen Abundance (Anemone hupehensis) is a colorful flower with 5 pink petals and an orange center. As for the disc, it’s a subdued yellow. Not many flowers can pull off this color combination, but the Hadspen Abundance is no ordinary cultivar. The cultivar grows well in zones 5 to 8 and reaches about 3 feet when fully grown.

A native of China, it’s a hybrid of the Japanese anemone, which grows abundantly in the eastern regions of China. And if you like late bloomers, the Hadspen Abundance redefines the word “late.” It stays in bloom until the first frost. So your fall will be joyous and colorful with a cultivar that outlasts every other anemone cultivar. Plant this cultivar with the other late-blooming anemones. As a cool-season cultivar, you need to start it in the fall, not the spring, since the summer sun has a damaging effect on the plant and flowers.

Pallida (Anemone x lipsiensis) is the queen of yellow. It’s a dainty flower that is yellow all over. But not the bright and loud yellow you see in daffodils. Rather it’s a dreamy yellow that is gentle on the eyes and senses. With parent anemones that grow naturally in Europe, this cultivar was developed as an act of love.

It grows mainly in zones 4 to 8 and only reaches about 6 inches. Pallida prefers moist soil where there’s a source of water nearby. So plant it in a spot in your garden that is always moist. That way, you won’t have to worry about watering it. It’s mainly a cool-season plant that gets a good start in the spring, and all the flowers open and fade before the end of the spring. So if you want to balance your anemone garden, plant this cultivar in the early spring.

As a perennial plant, it tends to spread and reclaims every inch of gardening real estate available. So any plants nearby need to watch out.

Richard Ahrens (Anemone x hybrida) is a masculine name for a flower that is all about the pure and delicate side of life. A girlie name would probably be more suitable for it. But when we consider that this cultivar has an invasive nature and tends to self-pollinate and spread out, maybe the manly and aggressive name depicts the nature of the cultivar more accurately.

If you plant Richard Ahrens, be prepared to do a lot of pruning and maintenance to keep the cultivar from stifling all the plants in the garden and take over. The flowers are deceptively beautiful and do a good job hiding the sinister nature of the plant. The five-petal flower has an orange center and a yellow disc.

As part of the Japanese anemone group, they tend to double bloom which is an advantage for anemones in general. They stay in bloom from mid-summer until the fall. So this anemone goes with the other late-blooming anemones. It doesn’t grow above 36 inches on a good day, but that height is enough for it to take a place in the back rows.

Montrose is another member of the Anemone x hybrida group. And it even sports the same colors as the Richard Ahrens. However, it’s not as invasive as that cultivar. Cultivated from the Japanese anemone, it’s a product of China.

But unlike the smooth and delicate flowers of the Richard Ahrens, the Montrose has thicker petals with ruffled edges. In fact, the whole plant has an unkempt look about it no matter how much pruning you do. It’s not your fault. That’s just how the cultivar looks. And did we say that the petals come in double rows?

But looks aside, this is a cultivar that can take in the cold weather with as much as a beep. Although it grows well in zones 4 to 8, its famous cold tolerance allows it to survive in colder zones where the winter night temperature dips below zero Fahrenheit.

Plant it in a sunny spot or one that gets partial shade. The mature plant grows to about 4 feet tall.

The Bride (Anemone coronaria) wraps up this delightful list of anemone varieties. It belongs to the De Caen group, which was developed in France. And for once, the name of the cultivar reflects its true beauty. The Bride is usually the centerpiece in floral arrangements sent to weddings. The white petals have a greenish center and a yellow disc.

Everything about this cultivar is distilled beauty. From the short stalks to the dark green leaves. The petals are crisp and fresh, and pure. So this is definitely a recommended anemone variety to grow if you live in zones 7 to 10. The fully grown plant will not exceed 24 inches, so it’s one of the medium-height anemones that deserve the center spot in your anemone garden.

When you cut The Bride, make sure to cut a long stem since this flower has a long vase life and can last for weeks if you change the water in the vase regularly.

Anemones are a delightful plant species, and they offer a wonderful variety of cultivars. As you group different cultivars together, eventually, you’ll settle on the right combination of anemones that reflect your tastes and sensibilities.

Anemone Care – How To Grow And Harvest Anemones