Don’t get us wrong, we’ll always be huge fans of the DIY classics; you know, techniques that have been around for years and traditional crafts that basically everyone and their mother has made before, at some point or another. As long as we get to make something, period, then we’re always happy! Given a choice, however, there are absolutely days where we’d really rather make something using unconventional tools and materials, just to shake things up a little bit. Lately, because our kids are such skateboarding enthusiasts, we’ve had our eyes on their old wooden decks and trucks, wondering if the pieces they’ve broken or swapped out when they put together new boards can be upcycled and reused in creative new ways. We also love the idea of the things we make showing the world how much our family members love skateboarding, in a really crafty way!

Just in case you’re as interested in crafting with and upcycling old skateboards as we were, here are 15 of the coolest DIY skateboard projects we’ve found in our search so far. 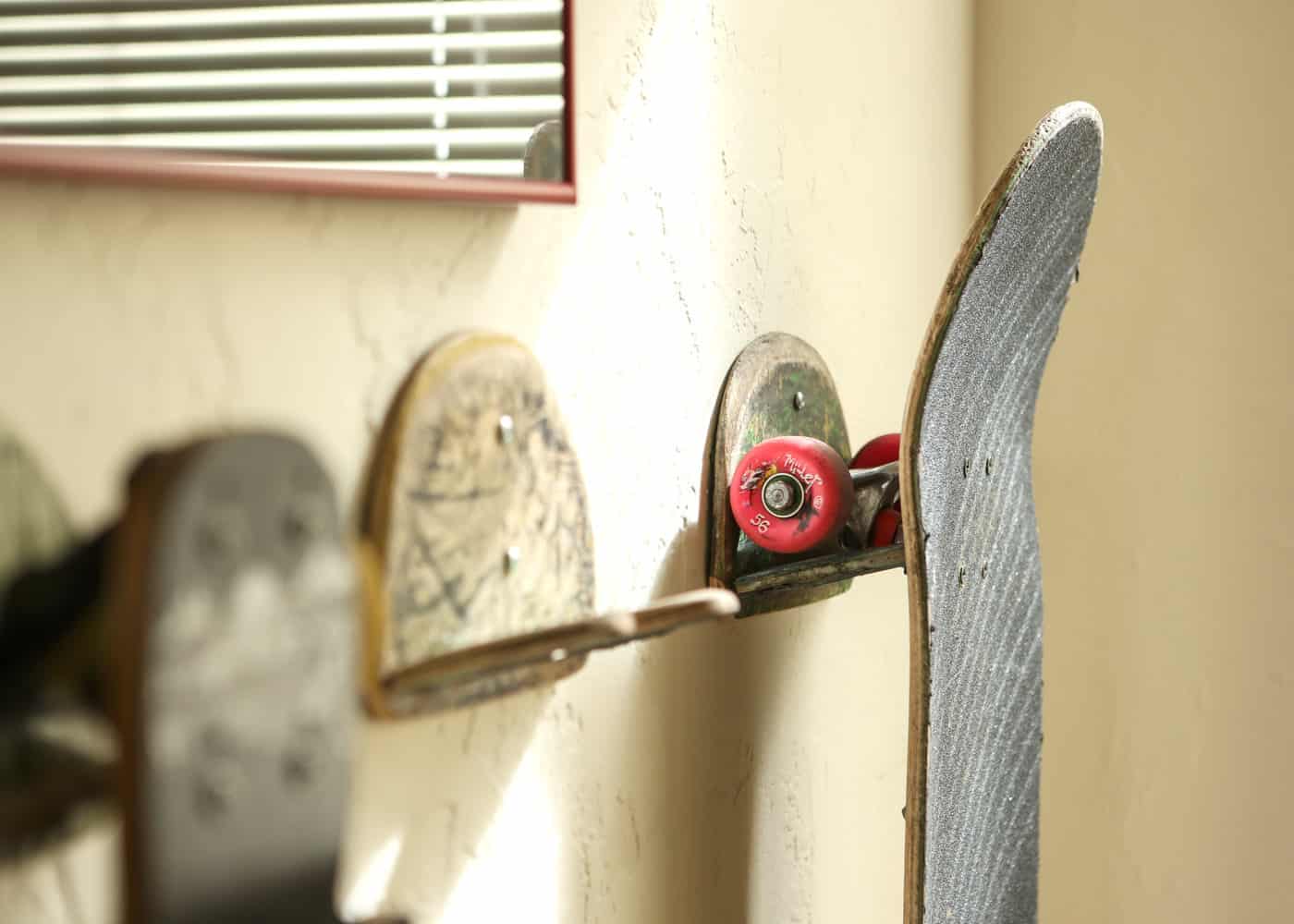 Are your family members actually such big fans of skateboarding that they have several decks they’re currently using and several old ones that are too damaged or worn to keep riding, but that they’ve kept lying around in the garage? In that case, you have just about everything you need to make an awesome skateboard hanger for their new boards out of their old boards! See how it’s done in more detail on Jryde Visuals. 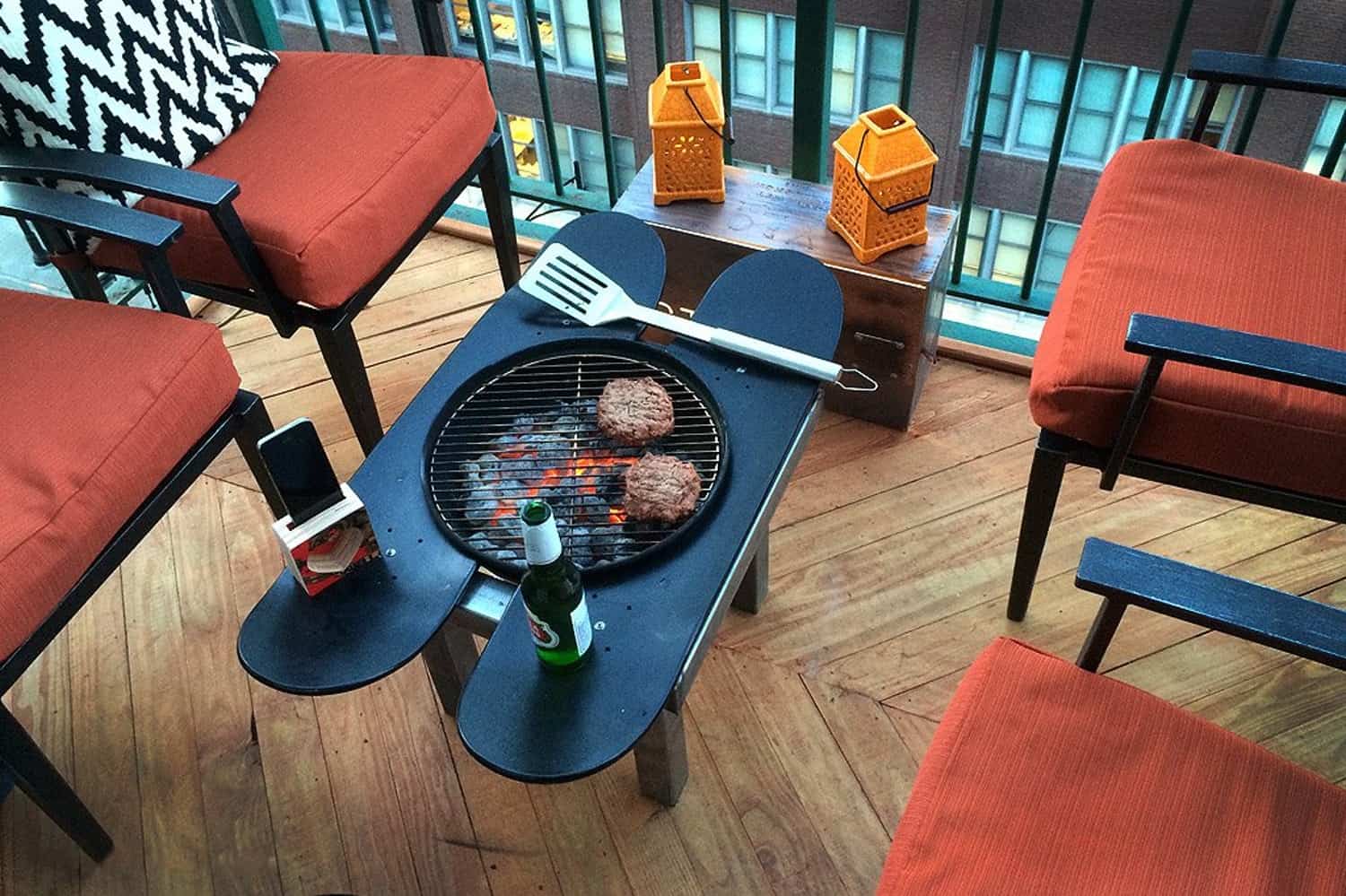 When you first started picturing upcycled pieces made from skateboards, were you thinking more of things like small furniture that would incorporate boarding into your décor scheme in a way that makes a statement without totally taking over the space? Well, if it’s your outdoor area that you’re searching for custom pieces for, then we’ve got the absolute perfect tutorial for you! Check out how Apartment Therapy made this fantastic porch sized grilling table from two skateboards that give you side planks to set sauces, drinks, and grilling tools on while you cook. 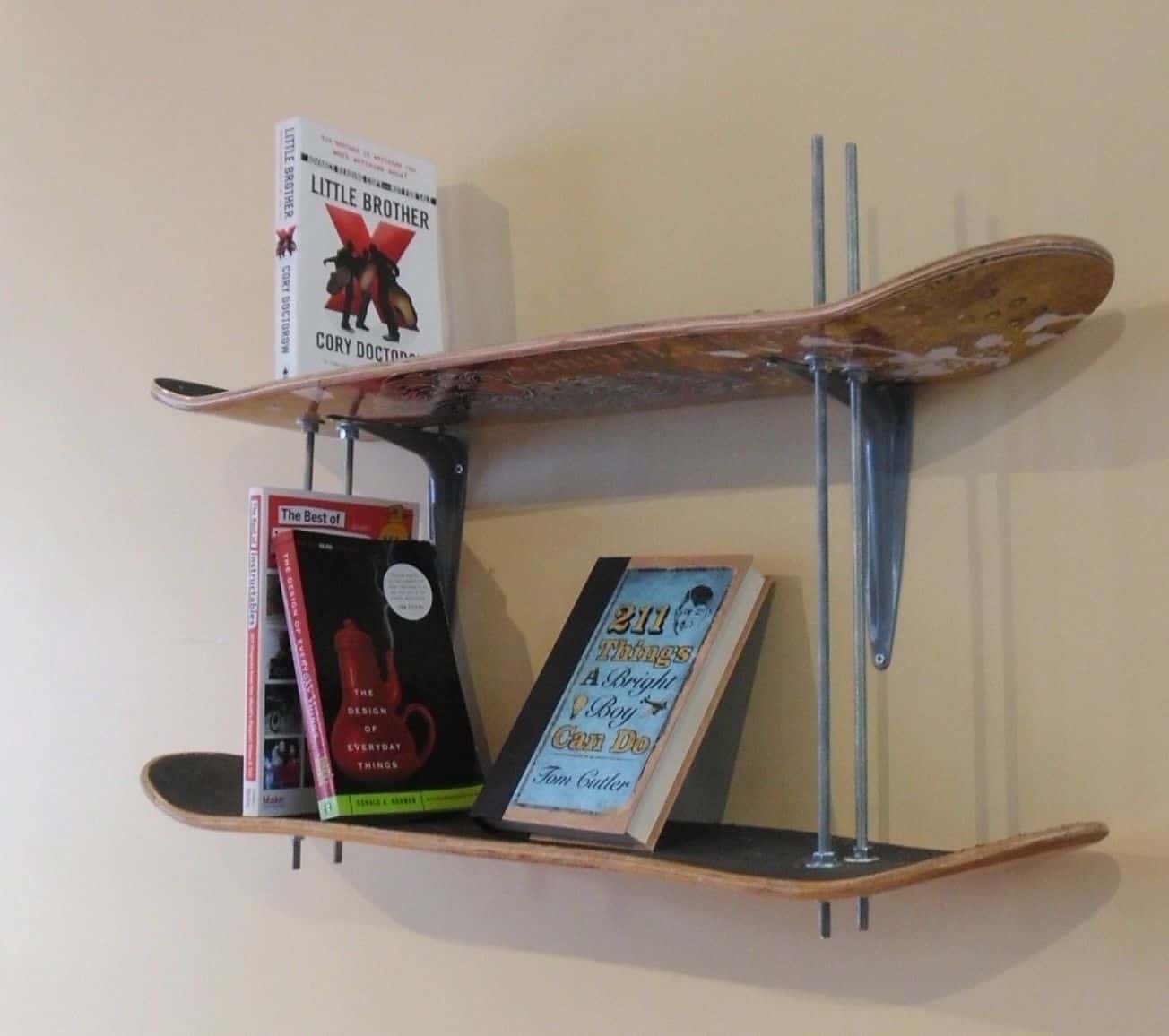 Perhaps you’ve been trying to think of a way to combine your kids’ love for fun outdoor activities like skateboarding with other things you want to encourage them to do, like reading? Then we really think you’ll be pretty intrigued by these wall mounted book shelves from Homedit that are made with old skate decks and a few metal bars! These might look complicated because of the way they’re stacked, but they’re actually surprisingly simple to make happen. 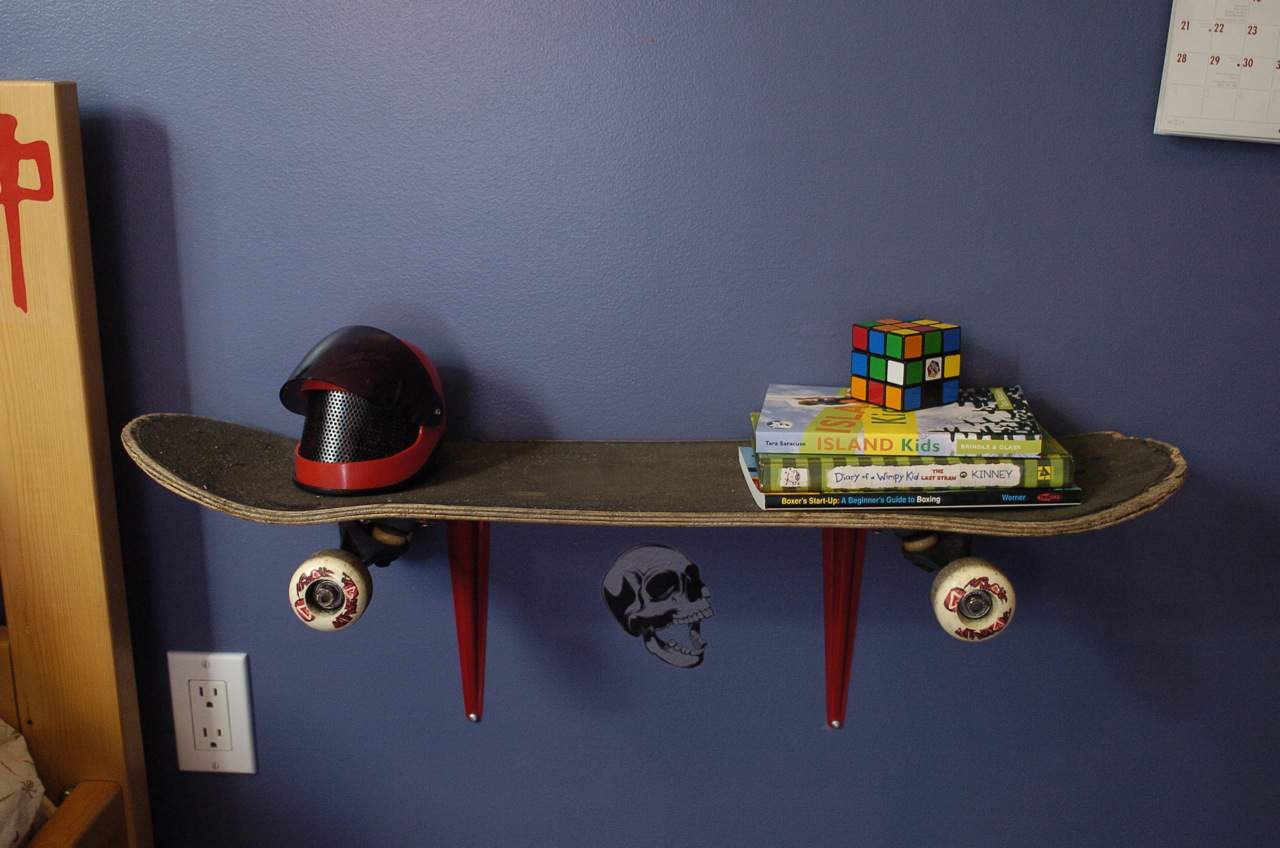 Are you very intrigued by the skateboard book shelf idea but you’re feeling a little too intimidated by the double stacked version above to consider giving it a try? In that case, here’s a simplified version that’s a little bit easier (and a little bit quicker) to put together because it only has one layer! Check out how Room Decorating Ideas made a wall mounted shelf by affixing simple metal shelf brackets to the bottom of an old skateboard. You can even keep the trucks and wheels right on!

Besides being a skateboard enthusiast, are you also and avid painter who loves experimenting with your mediums and hand painting non-traditional things just to see what kinds of art you can create? In that case, we have a feeling you just might be the perfect person to create something like this hand painted, frame, and wall mounted skateboard art featured on Recyclart! 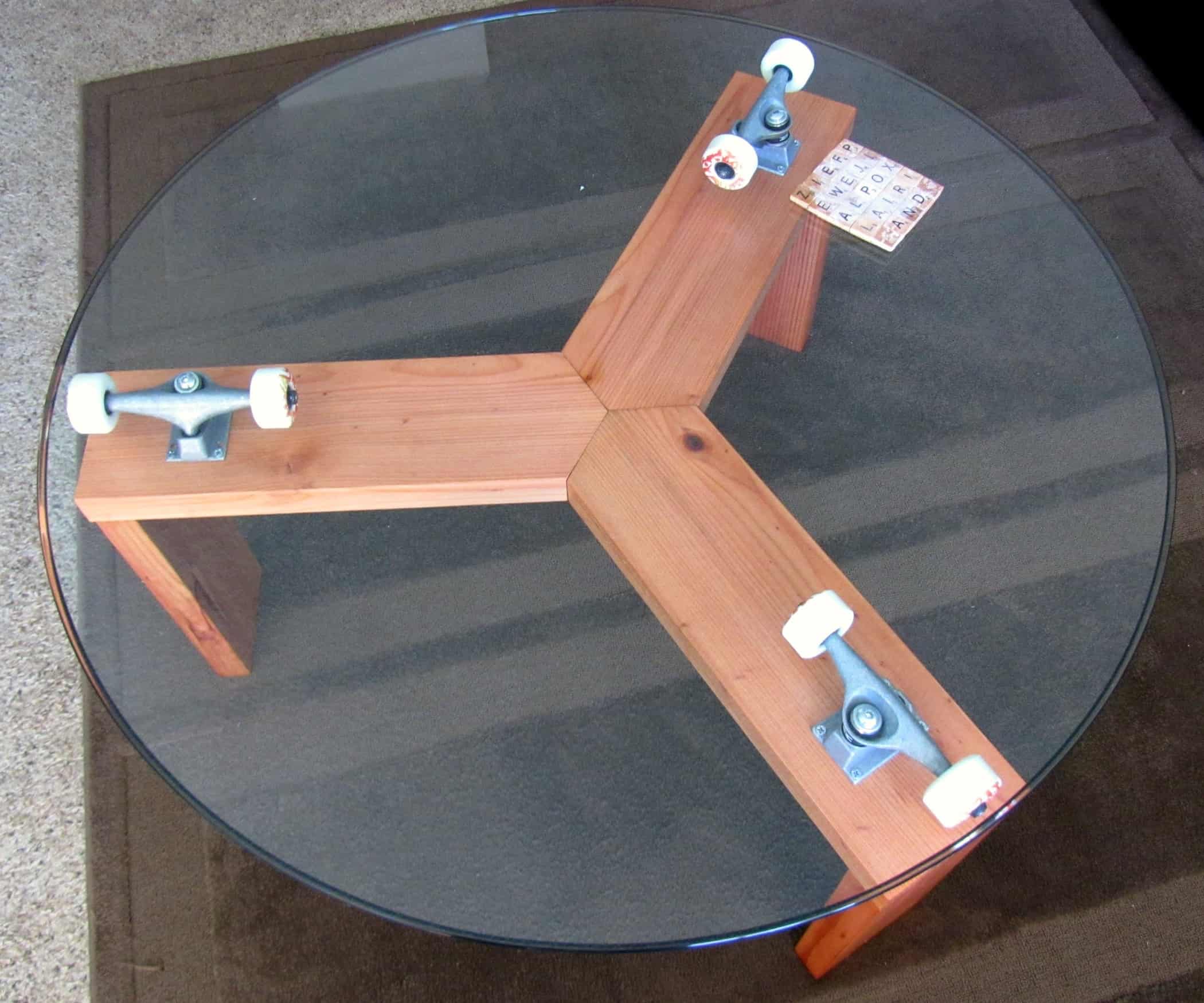 We’ve already shown you quite a number of recycled and upcycled pieces that involve transforming the actual deck of the skateboard into something else new and useful, but what about the trucks and the wheels? Some of the projects we’ve see keep them on as a decorative detail, but we kind of wanted to find one that actually puts them to good use. That’s why we were so excited to see this awesome “lazy Susan” style table created by Instructables that uses the wheels screwed upside down into boards to make the glass top move. 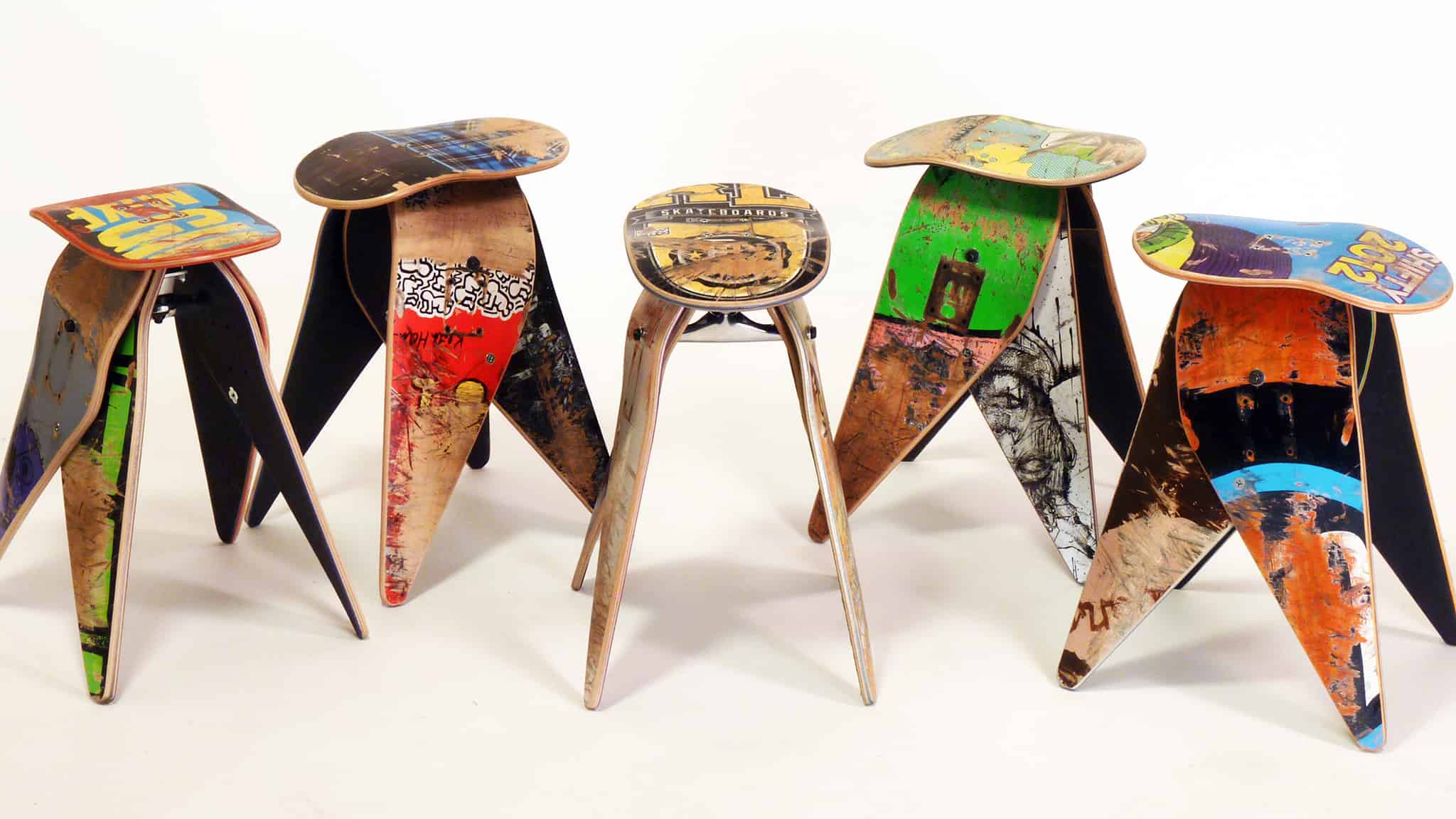 Do you have several old skateboard decks that could use upcycling and you have some experience working with wood and similar materials? Then we’d be willing to bet these awesome repurposed stools might strike your fancy! X Games shows you how to cut and sand the “leg” boards on and angle to make them stand solidly, as well as how to attach the seat piece on top.

8. Rings made from sanded skateboard wood 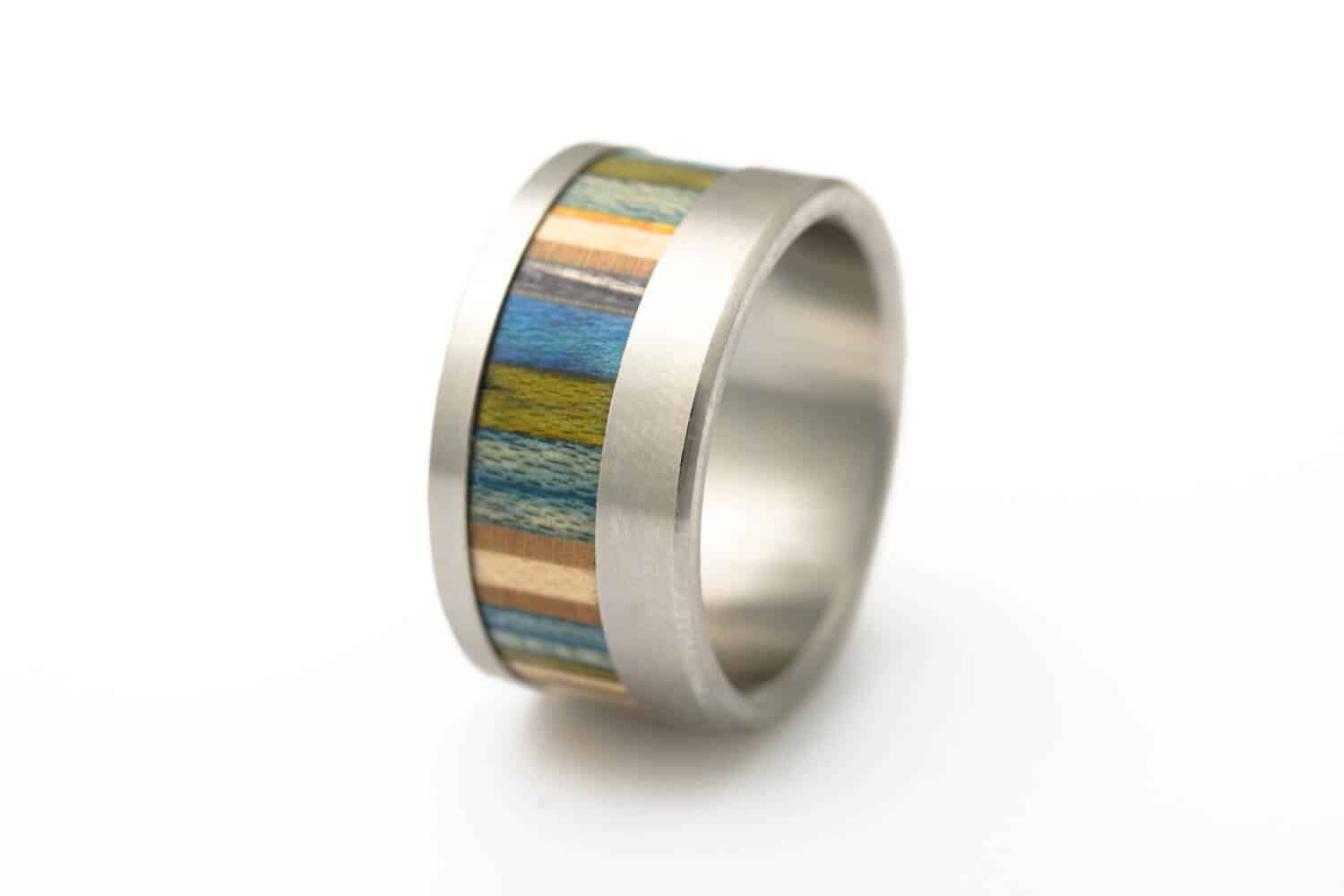 This particular idea might not come with an actual step by step tutorial in itself, but it’s still a useful concept for those who have a little more experience in hands-on DIY techniques like wood working, metal smithing, and jewelry making, so we still thought it was worth including! This awesome piece featured on Diirt suggests using wood from an old skate deck, sanded down nice and smooth, to create a stylish repurposed ring. 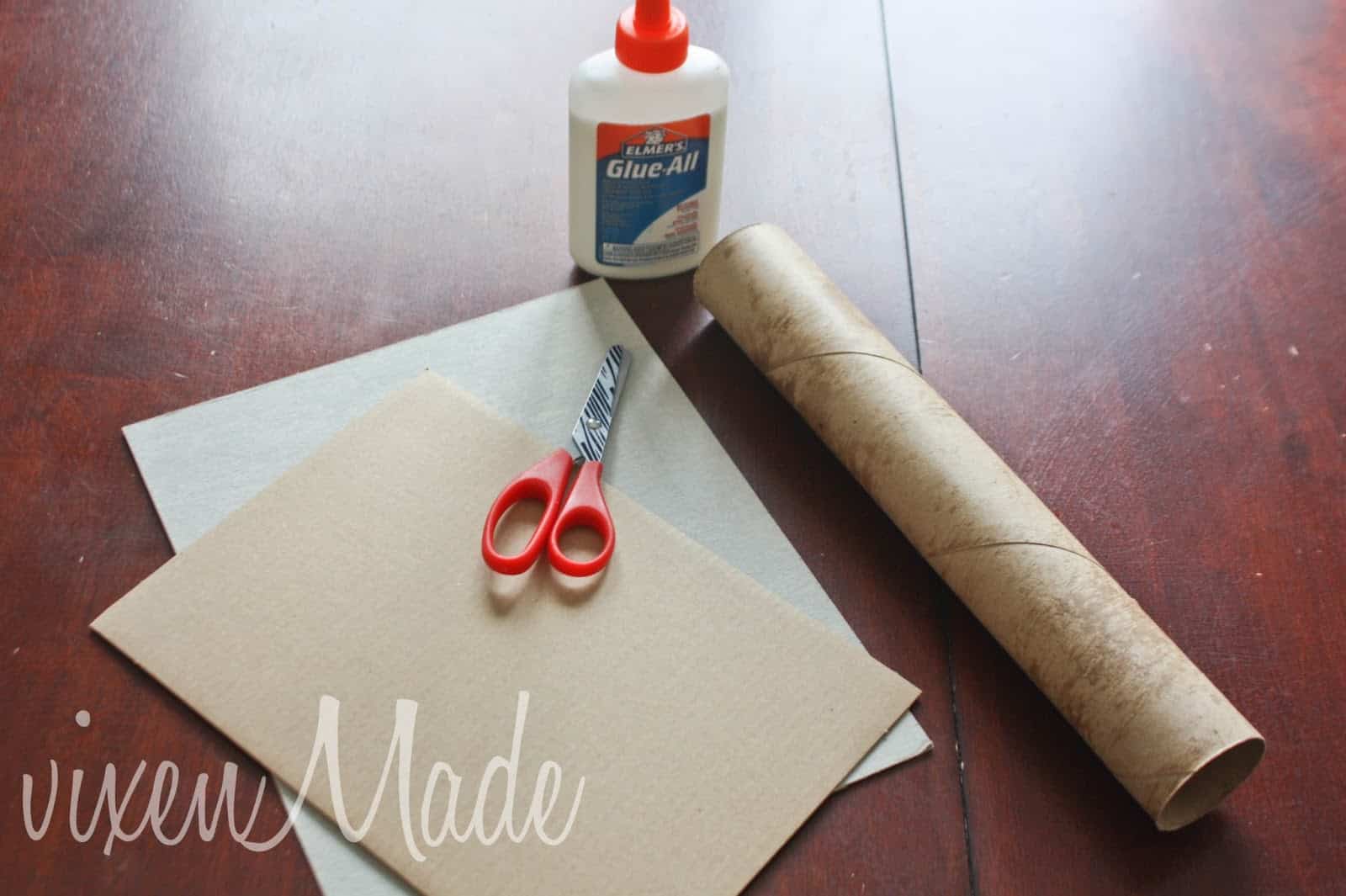 What if your kids are actually a bit too little to really start skateboarding yet, but they’re such big fans of the sport that they’ll do just about anything to pretend they’re pro boarders? In that case, we think we just might have found the perfect tutorial for you! It doesn’t actually upcycle an old board, but it’s so cute that we couldn’t resist including it on our list. Find out how to make a little skateboard complete with rolling wheels from Vixen Made using an empty paper towel roll and some cardboard. 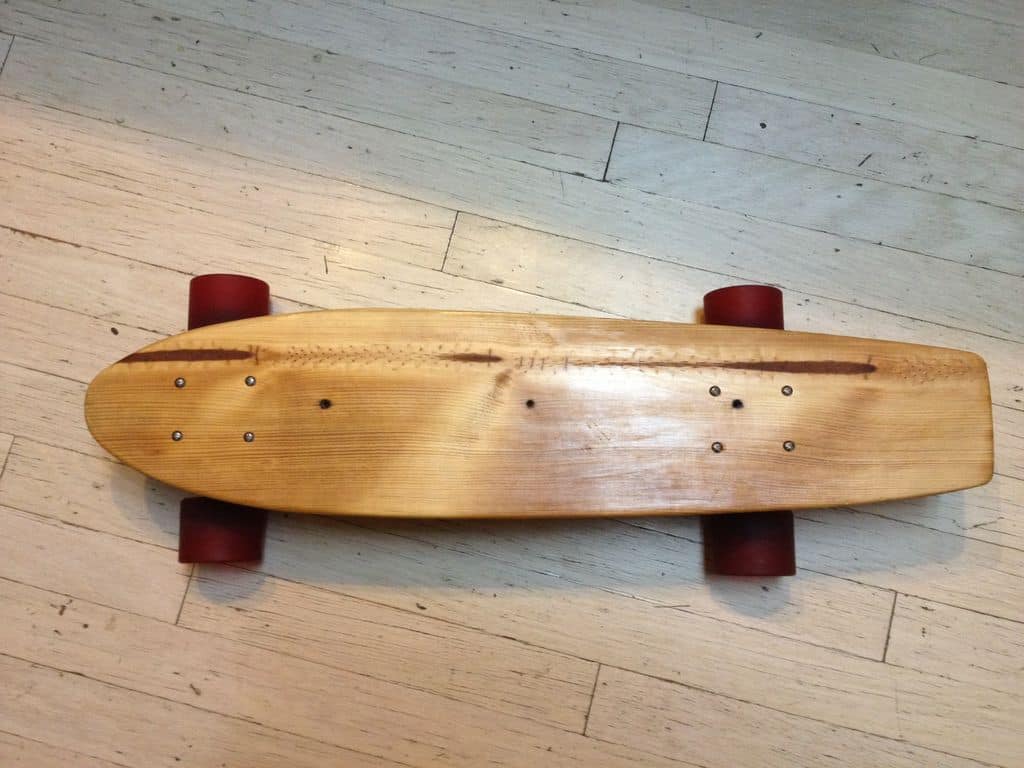 Have we really caught your eye with the few woodworking ideas that we’ve included so at because you’ve been practicing your carpentry, but you’d rather make a new skateboard right from scratch than just transforming an old one? In that case, we definitely think you should check out this tutorial from Reclamation Administration, which teaches you step by step how to make your very own board from reclaimed wood. 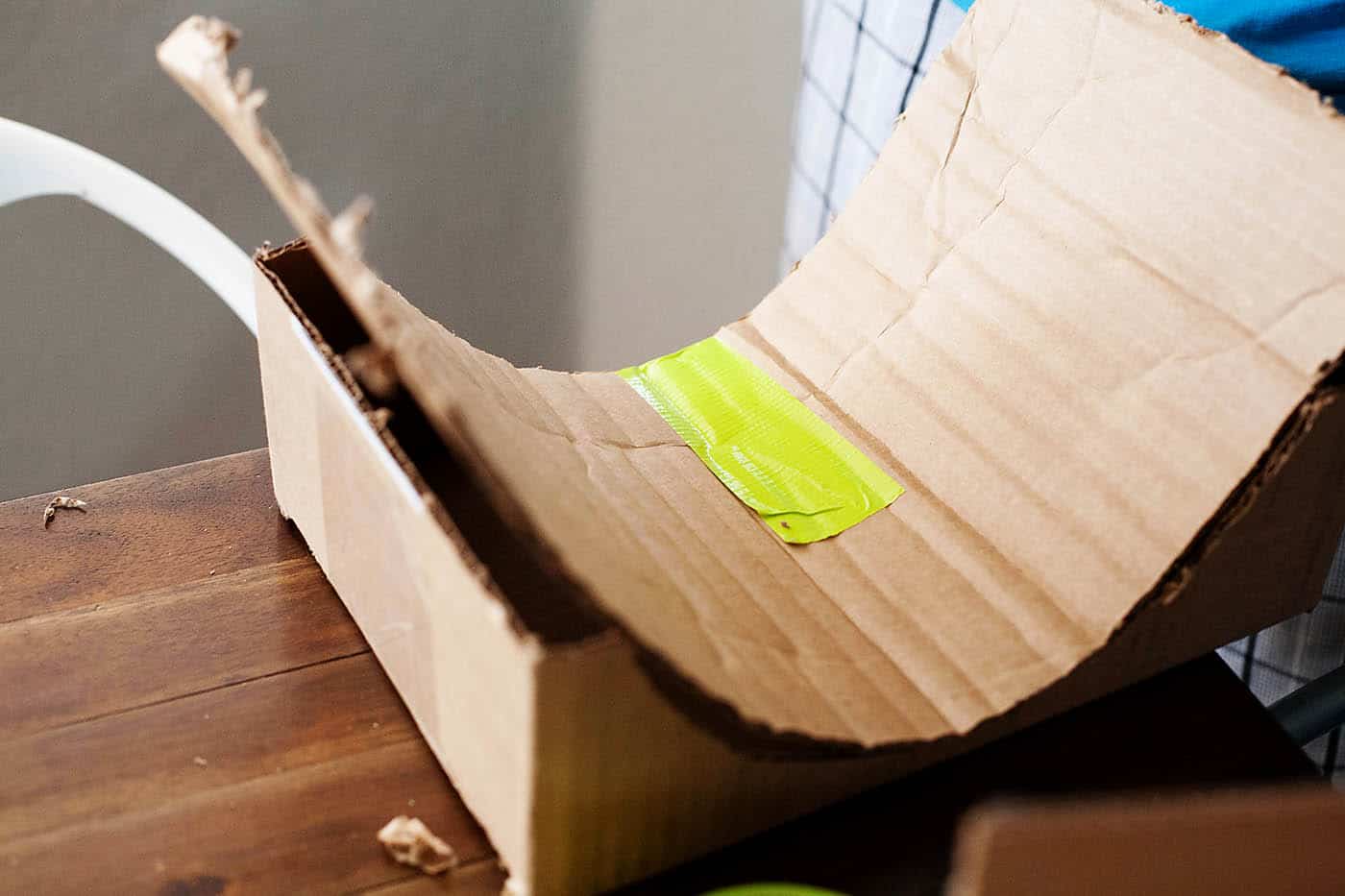 Are your kids still young enough that the closest thing they have to a real skateboard so at is a finger board or Teck Deck to play with, but they’re kind of tired of using your furniture and décor pieces as their trick sites? In that case, here’s the perfect opportunity for you to help them combine their love for skateboarding with their love for crafting. Check out how All For The Boys used cardboard and tape to make all kinds of miniature half pipes and trick boxes! 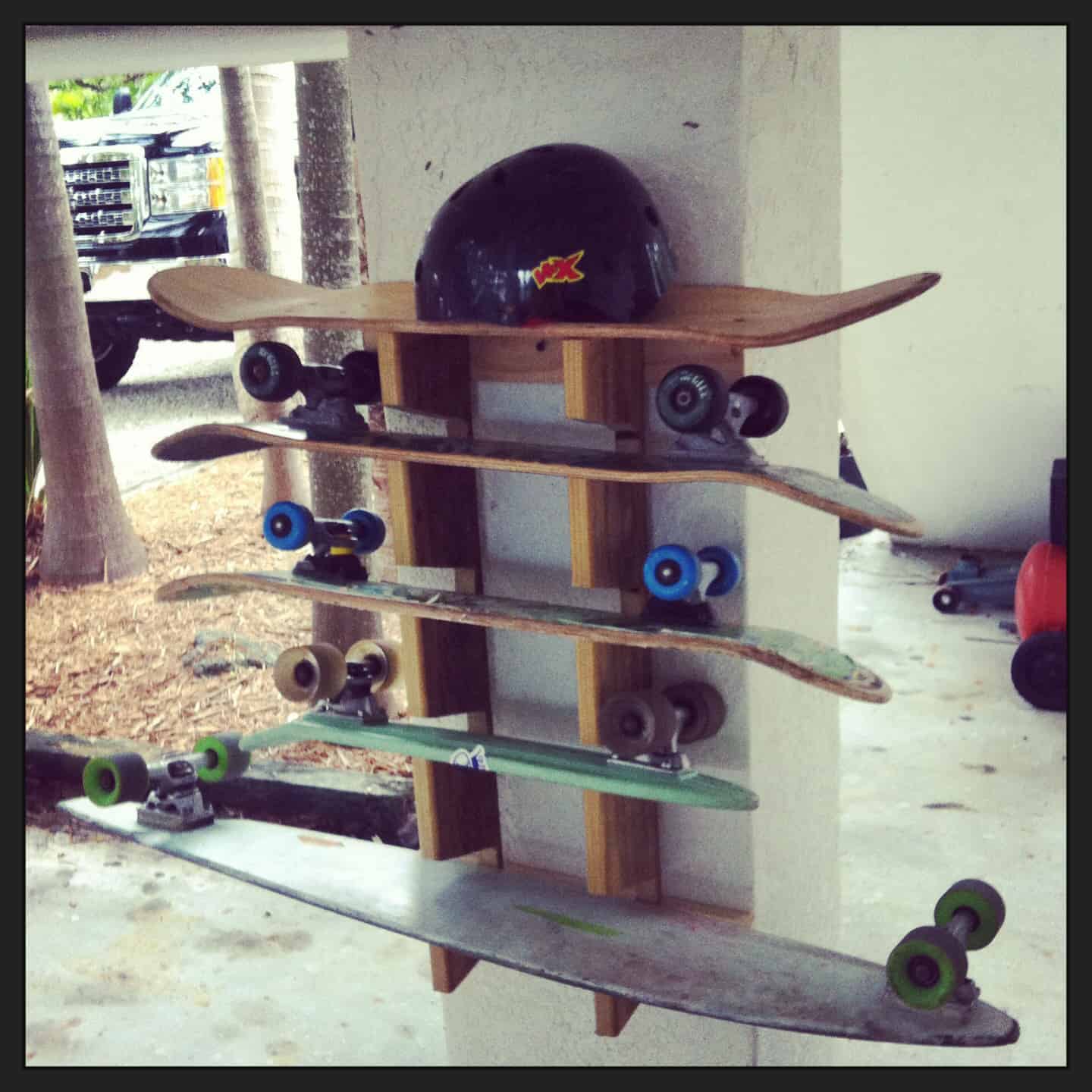 Perhaps you’ve actually got quite enough skateboards and even quite enough upcycled skateboard projects already, but now you need a place to stack the boards when you’re not using them? Then here’s a DIY project that still puts a lot of those same woodworking skills we’ve been talking about to use but gives you a little extra storage space than you have before! This Pinterest suggests wall mounting two boards with even notches cut into each one that the side of a board can slide right into. 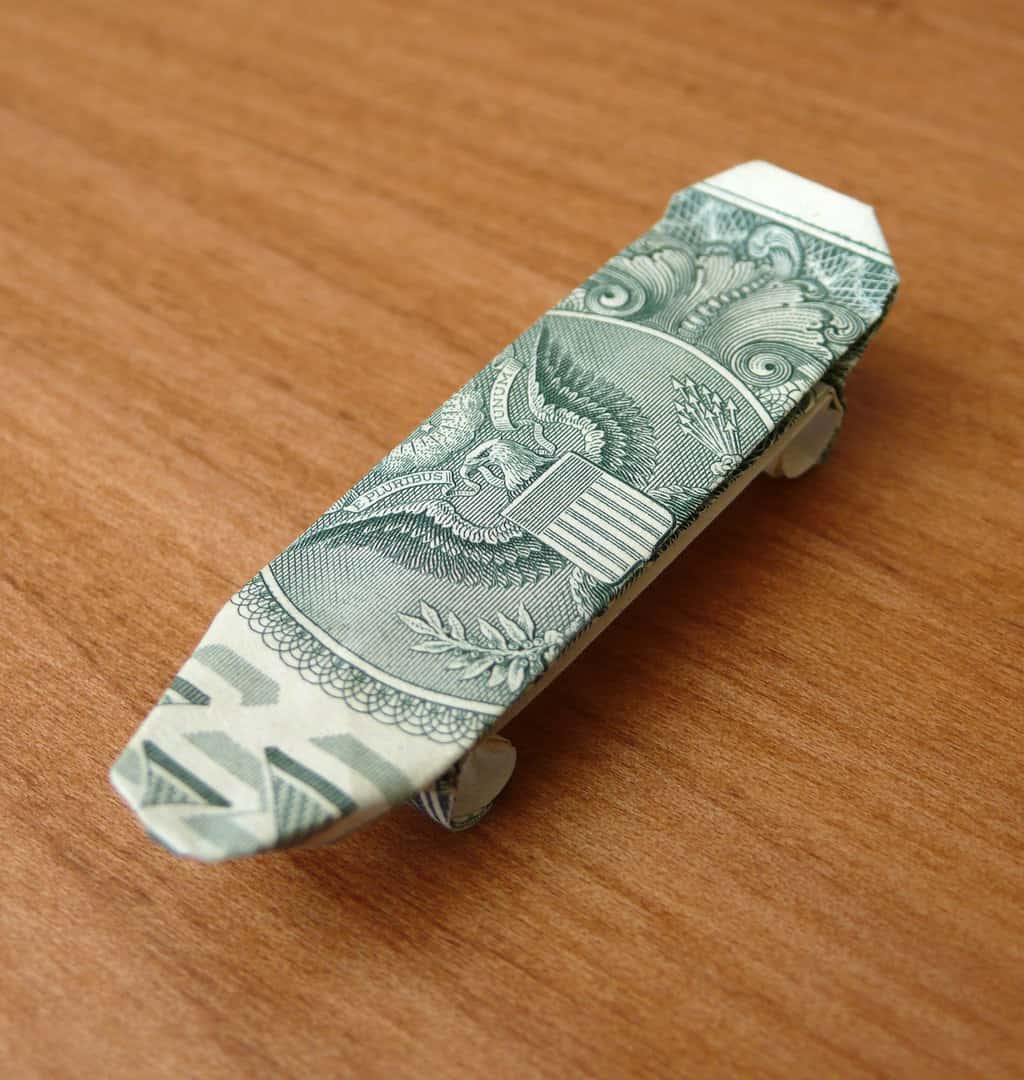 Have you always been a big fan of small, simple DIY crafts that you can do and undo, giving your restless hands something to do when you’re on the phone or watching TV? Well, dollar origami might not be the first thing that comes to mind, but the moment we saw this surprisingly simple skateboard folding project, we knew we had to add it to the list! Get the full instructions on Craig Folds Five. 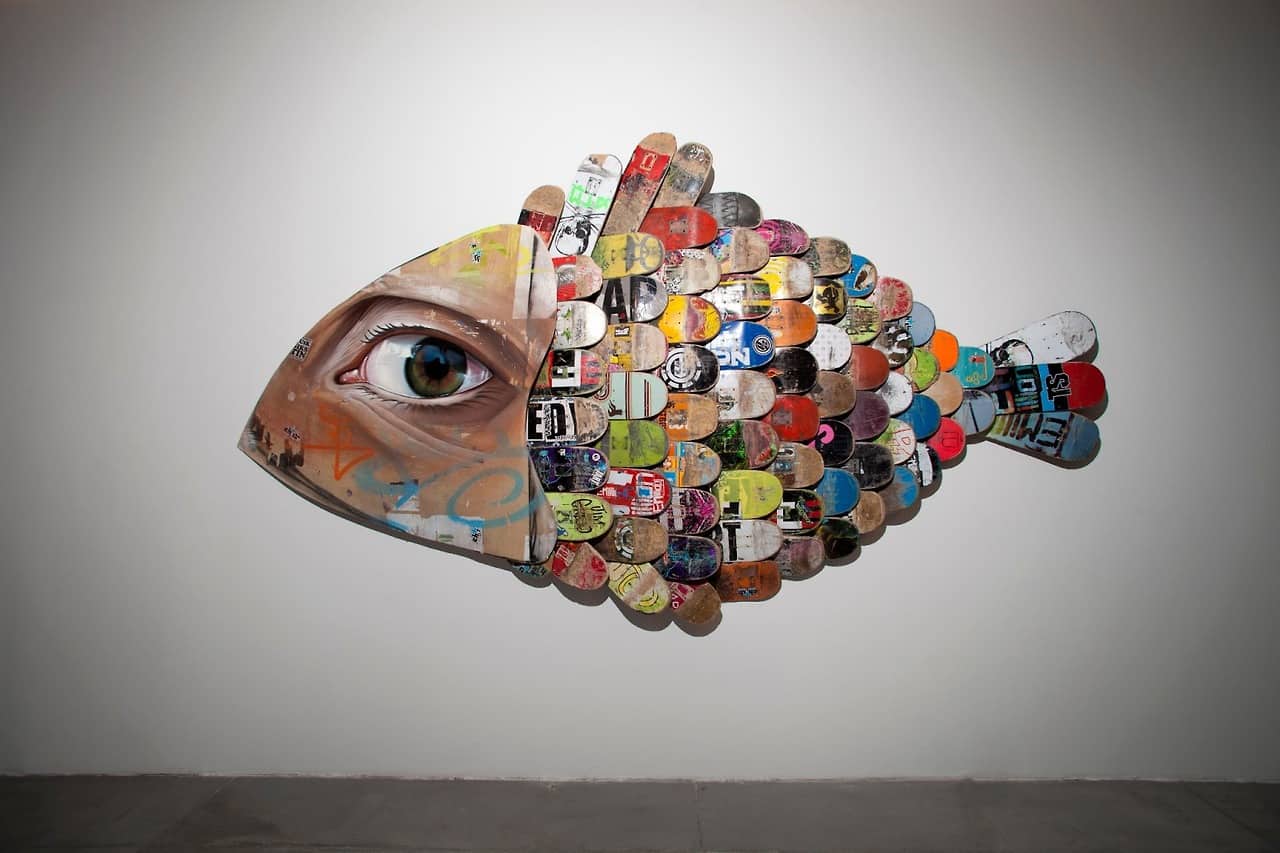 Did we really catch your attention when we showed you the stools made from pieced together skateboard decks cut into different sizes and shapes, but the picture you have in mind of what you want to make is a little more artistic than functional? Then perhaps you’d like to recreate or simply gather inspiration from this amazing collage style skate deck wall art outlined on Makezine! 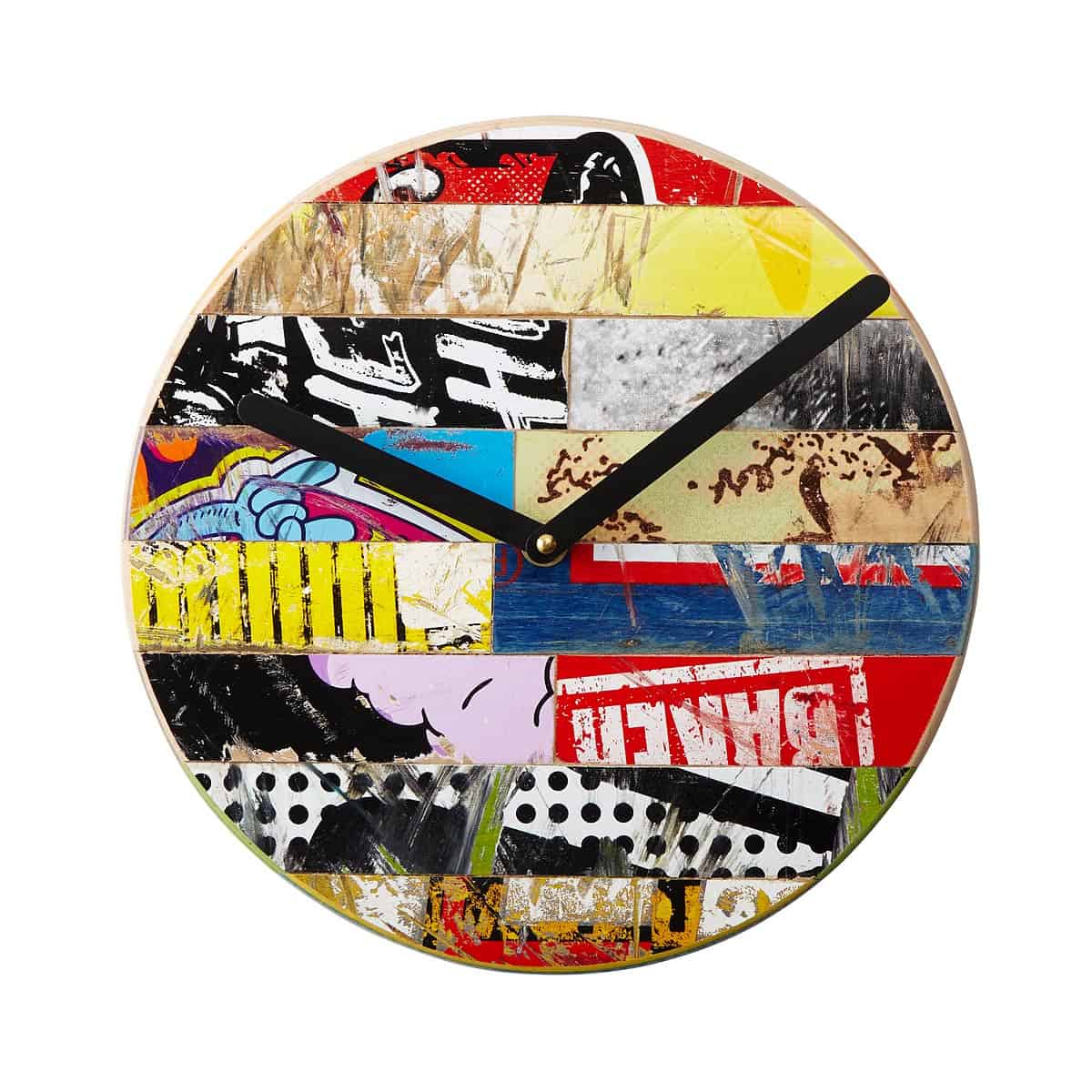 Have you actually got several decks that you enjoy the colours and patterns designed on the bottoms of but you don’t really need anything that’s specifically skateboard related, even though you’re intent on repurposing the boards? Then perhaps piecing several of them together to make the base for something you do need is the answer? This awesome deck collaged DIY wall clock from Uncommon Goods is the perfect example of what we mean!

Do you know a fellow DIY enthusiast who loves skateboarding as much as we do? Share this post with them for a little bit of crafty inspiration! 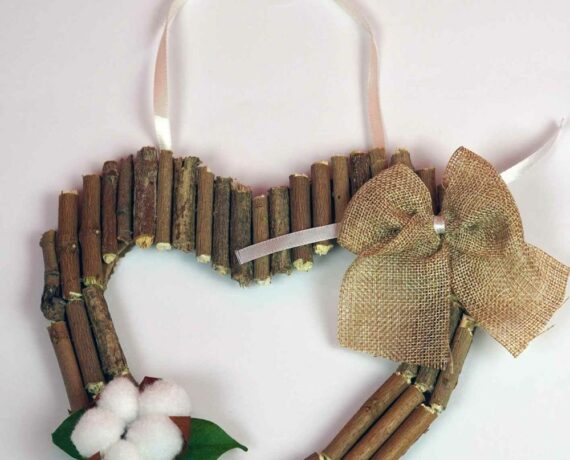 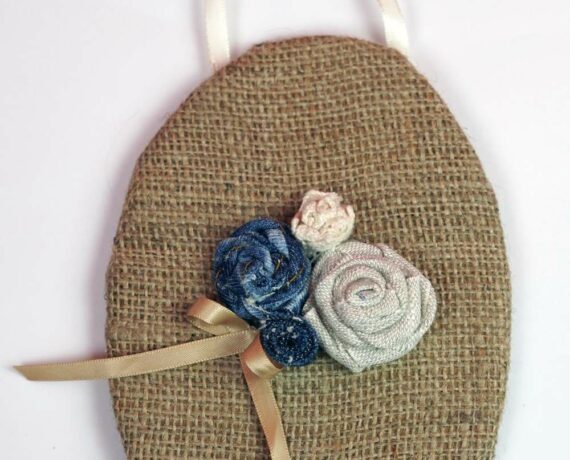 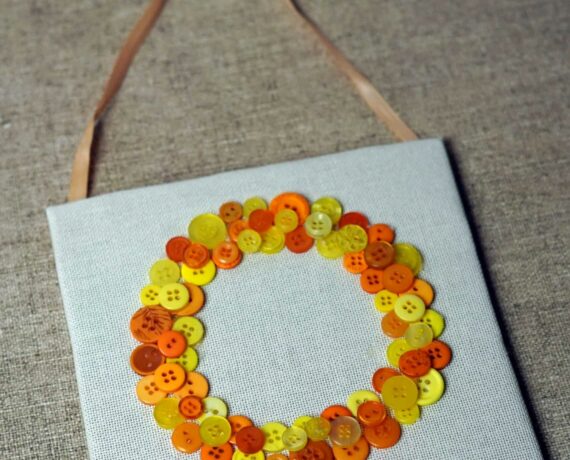 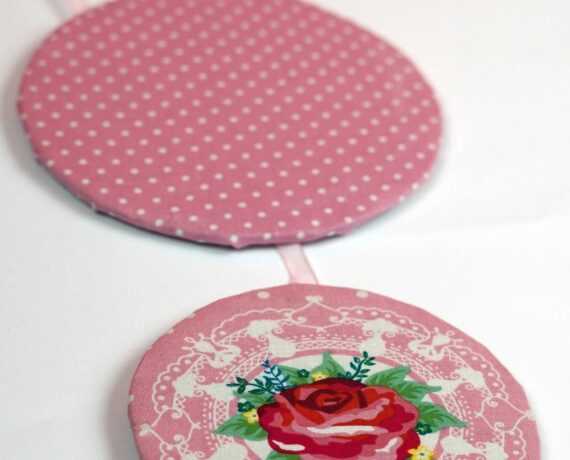