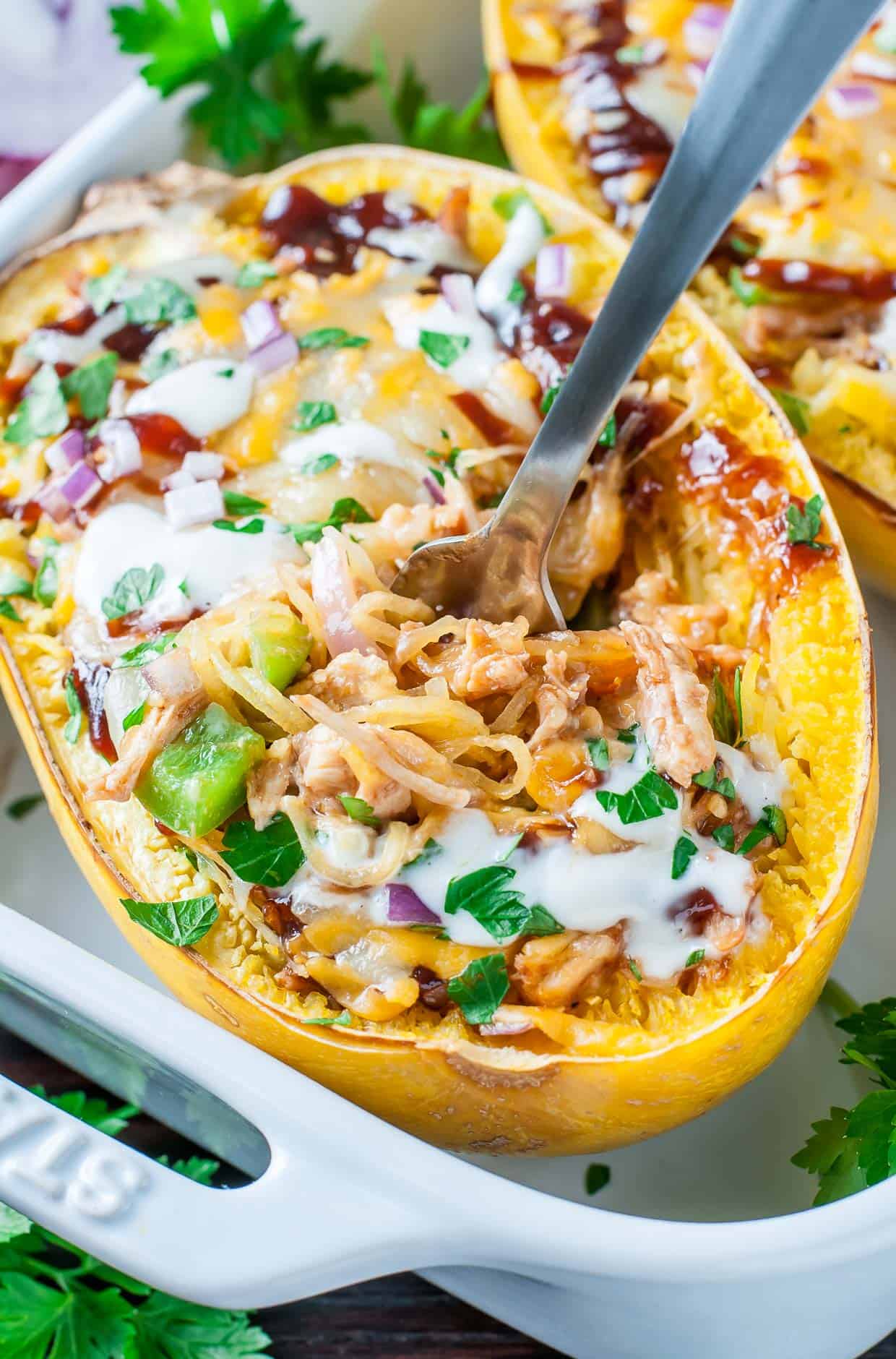 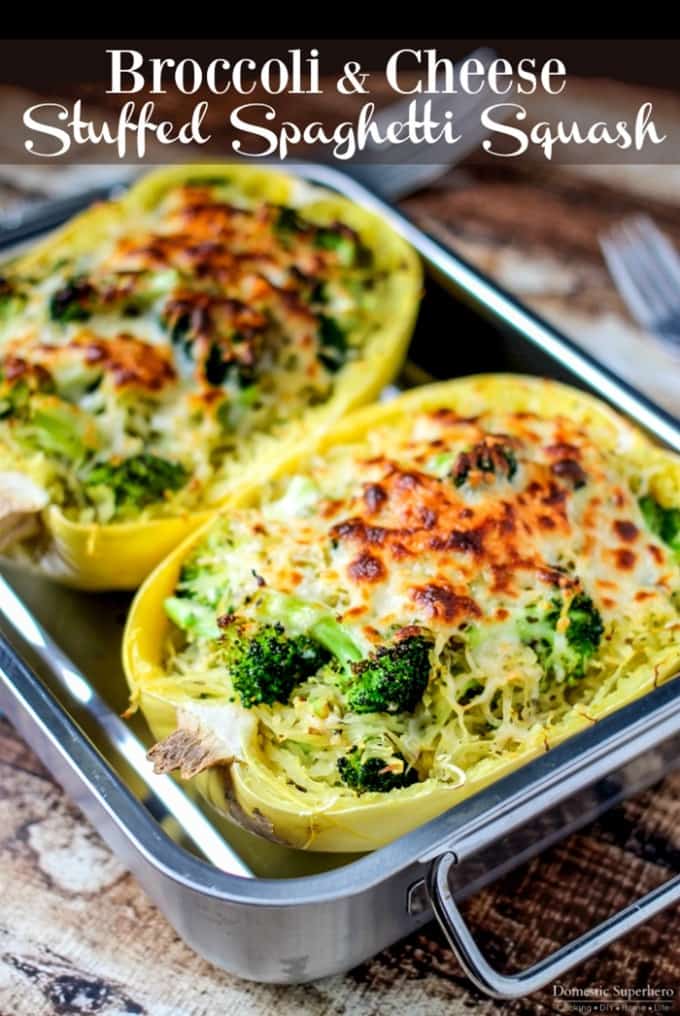 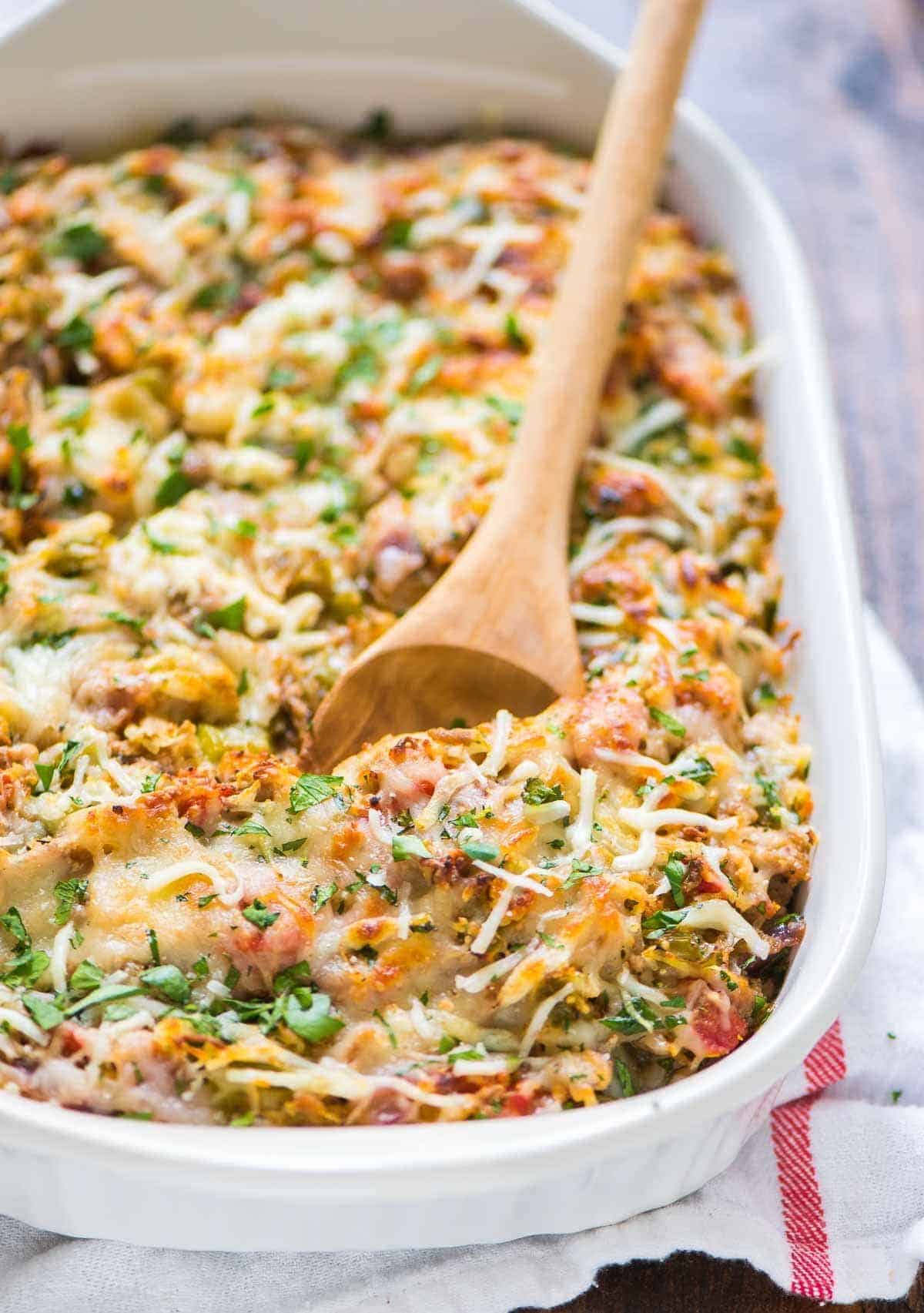 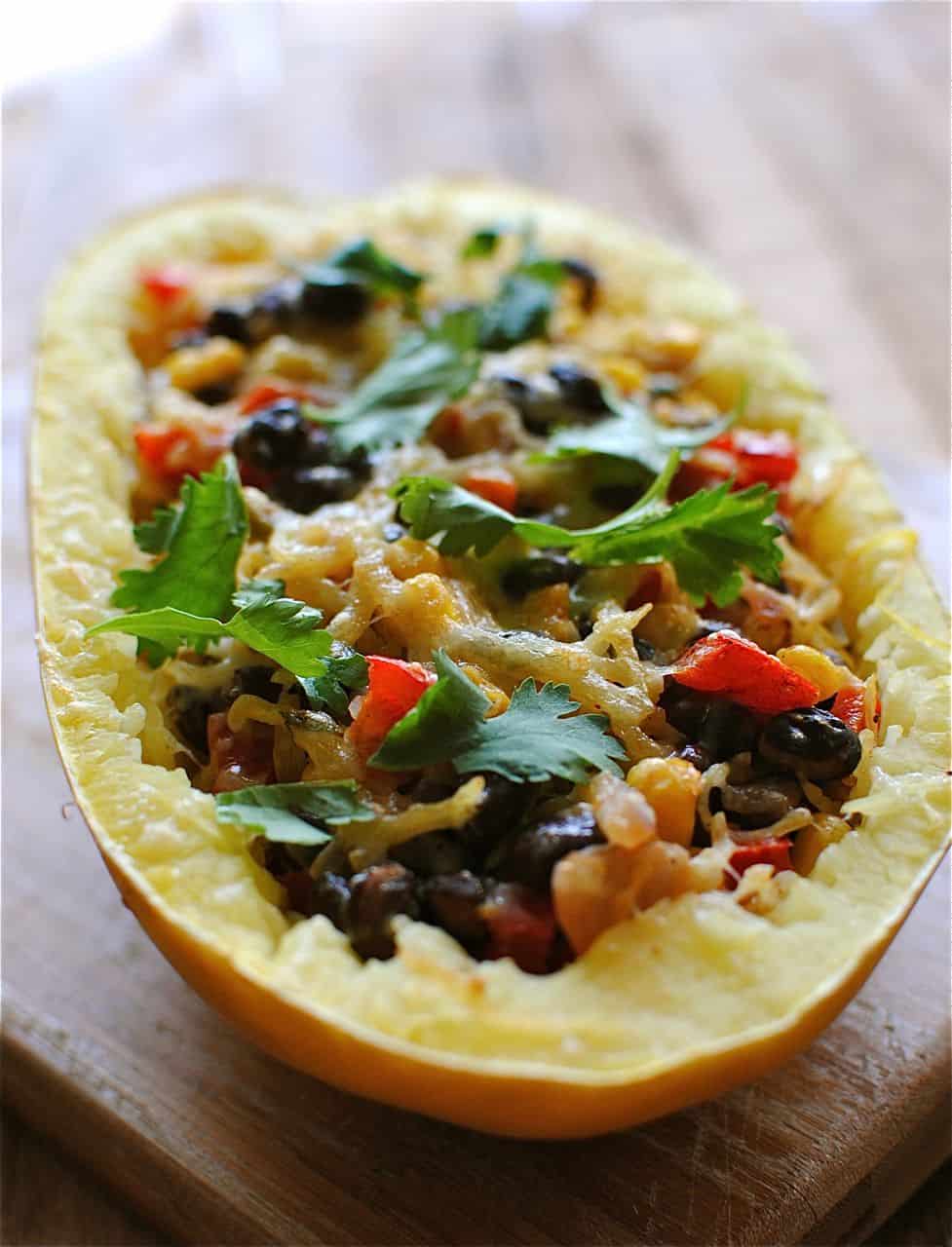 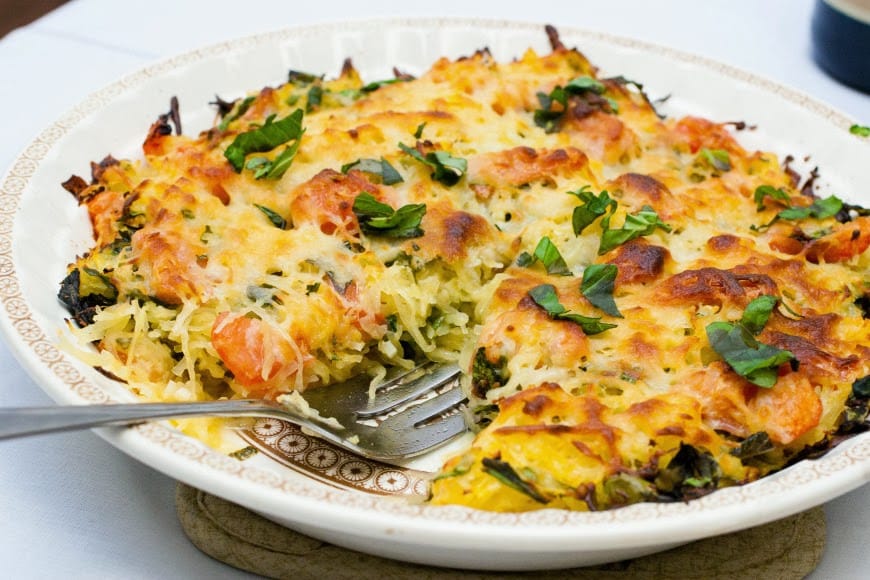 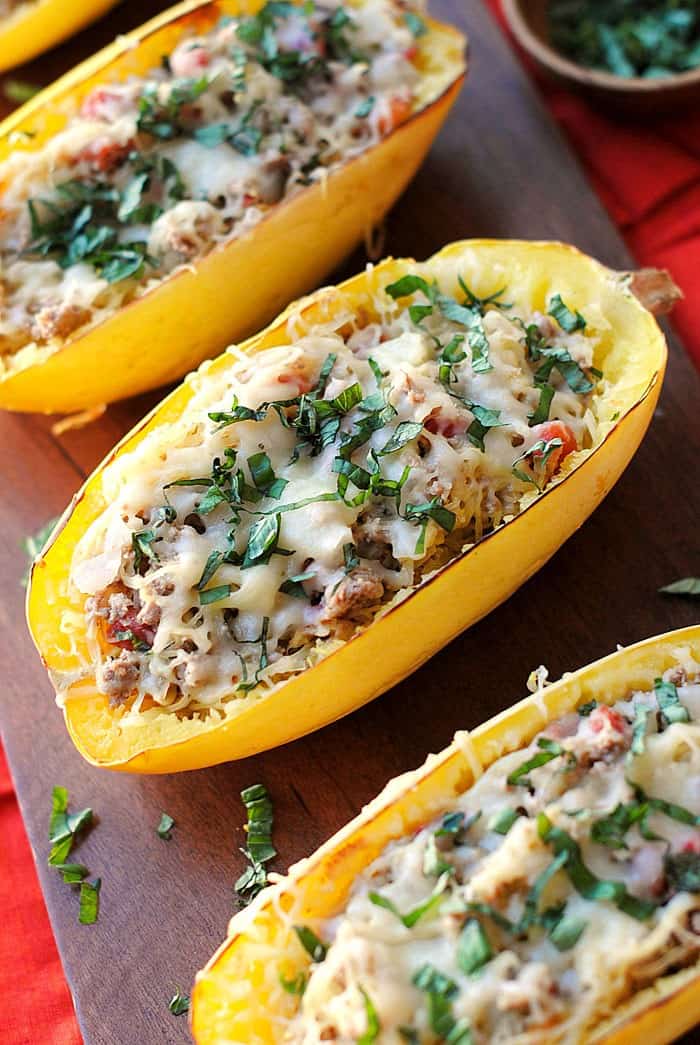 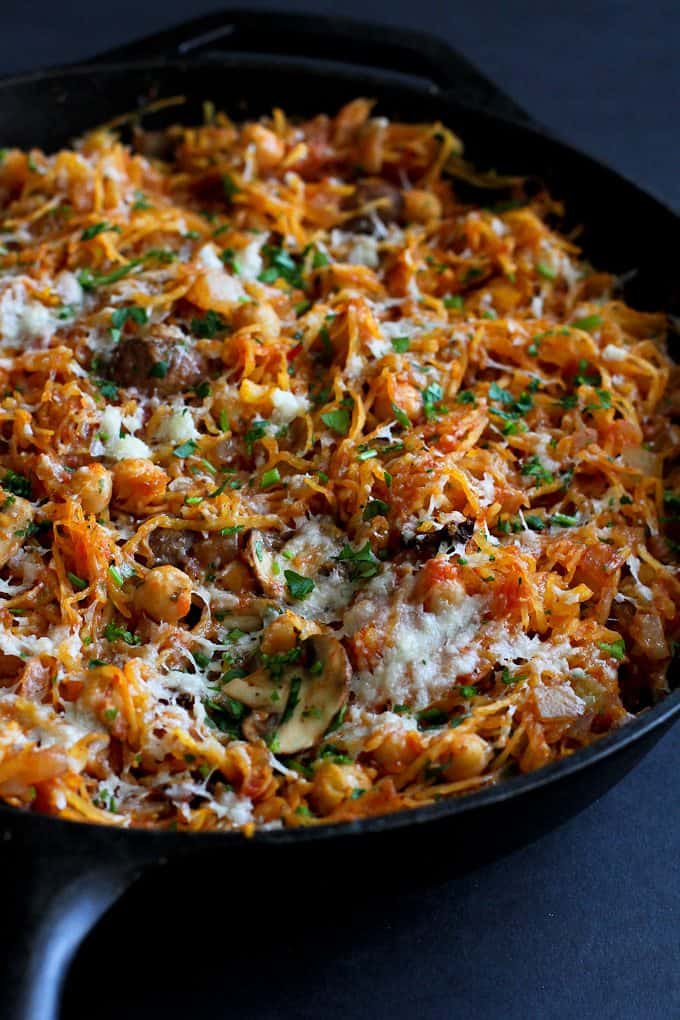 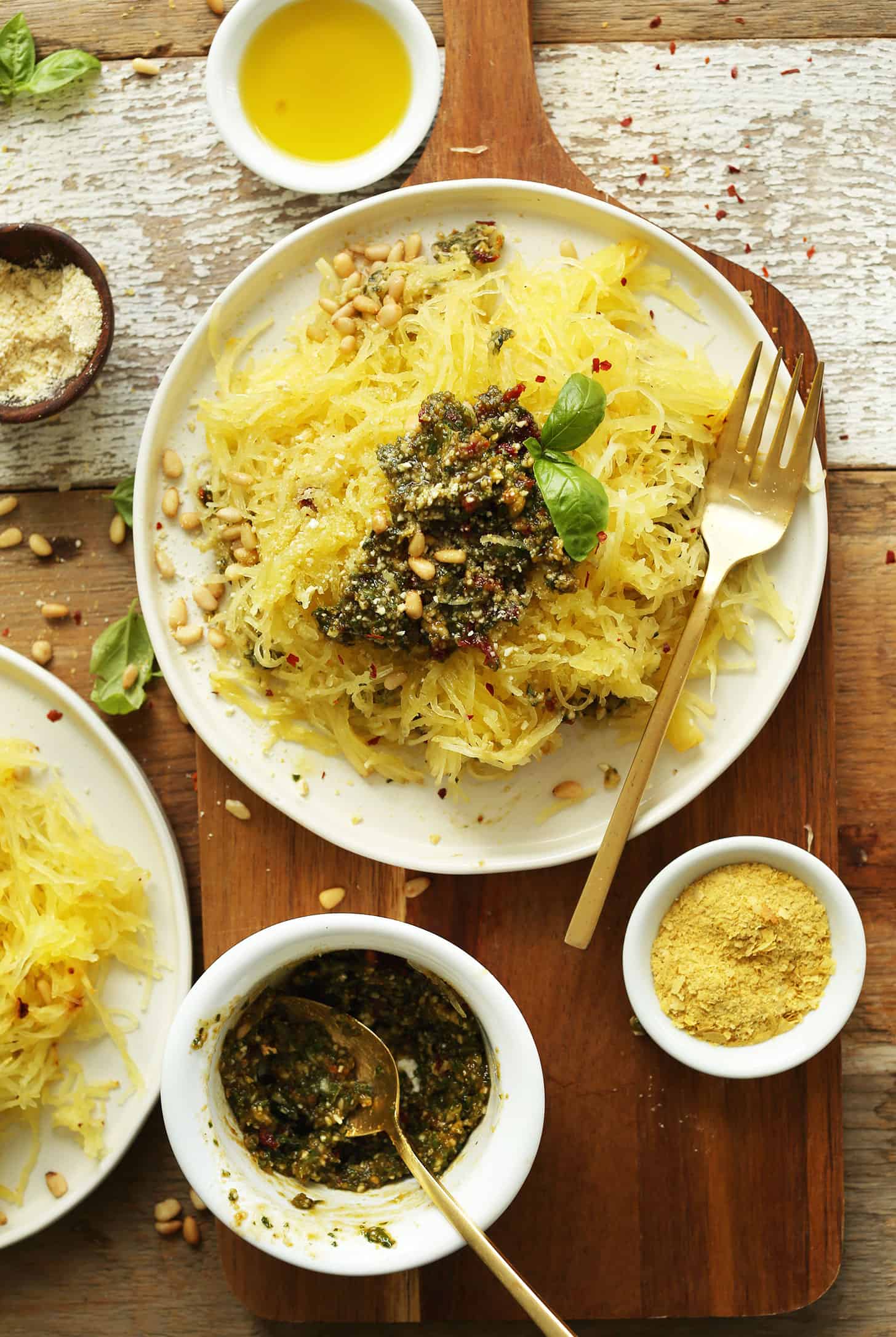 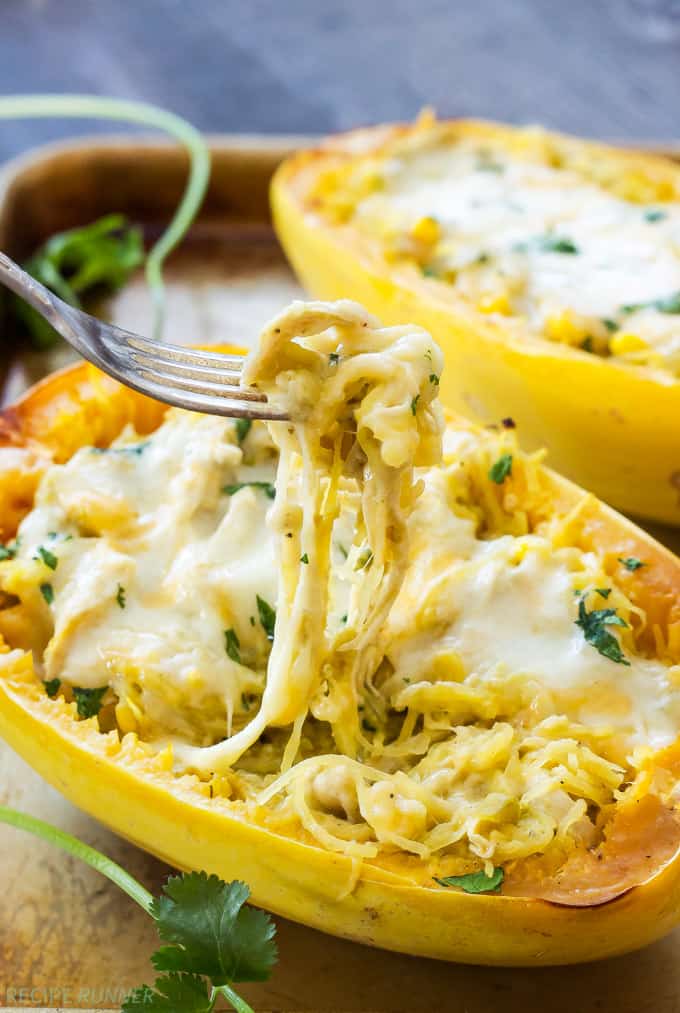 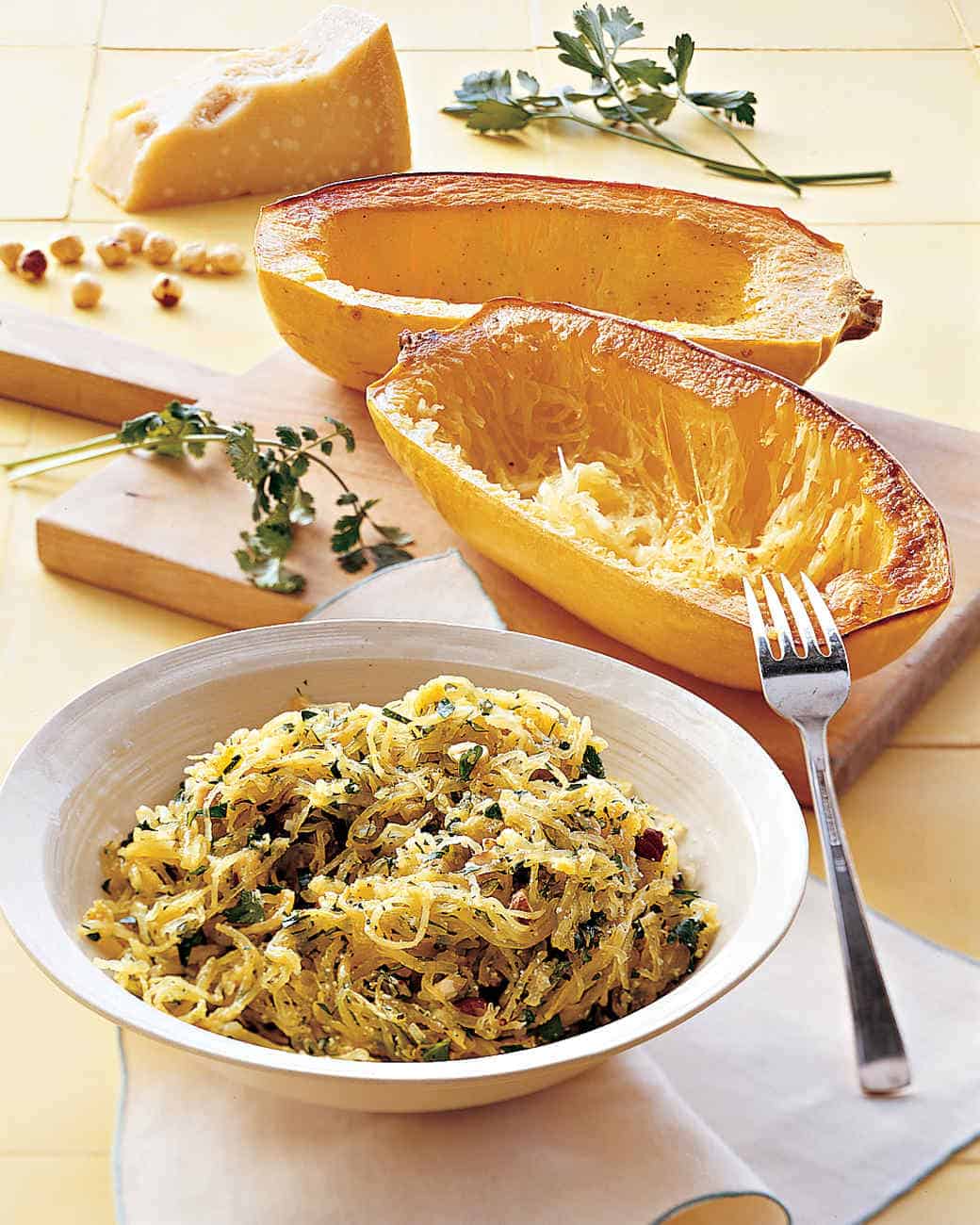 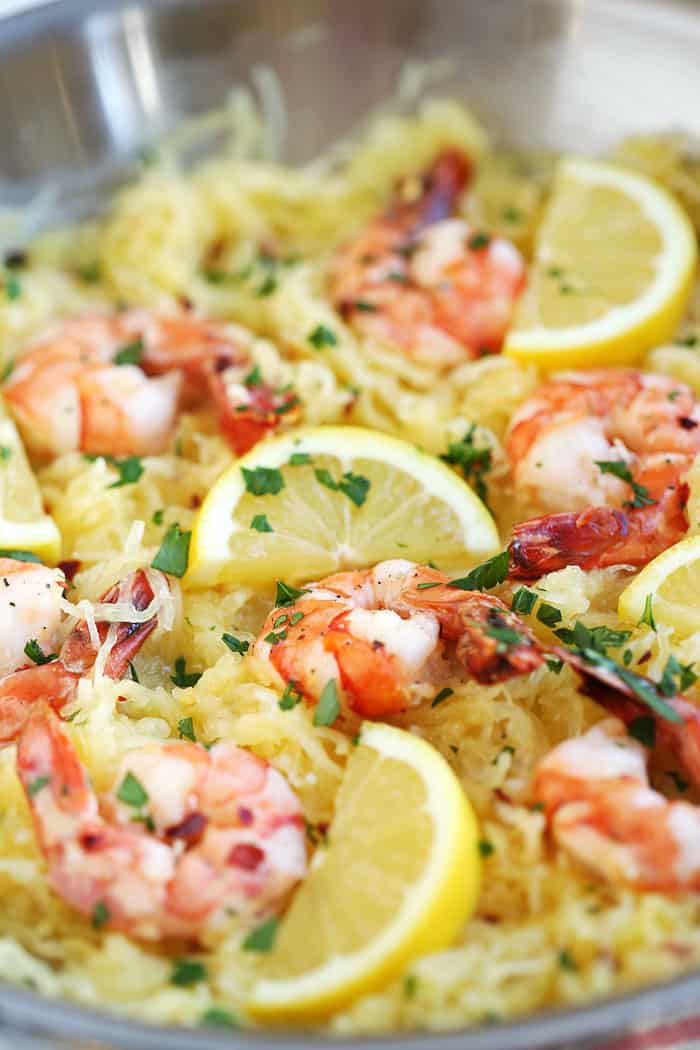 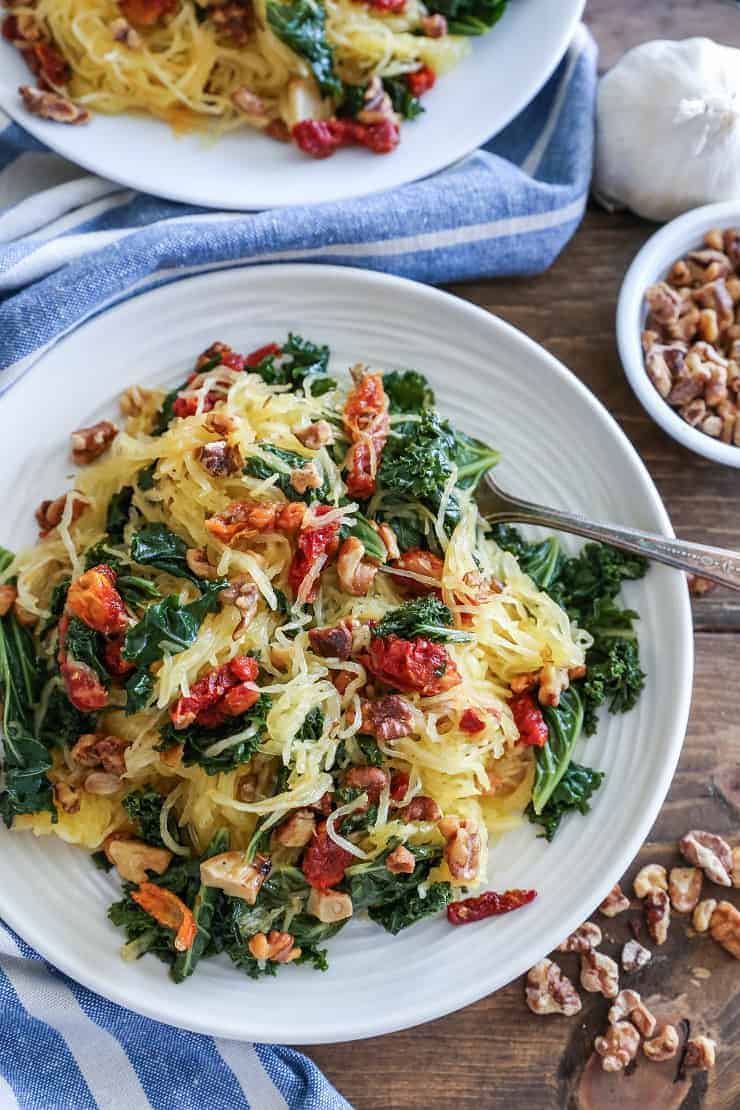 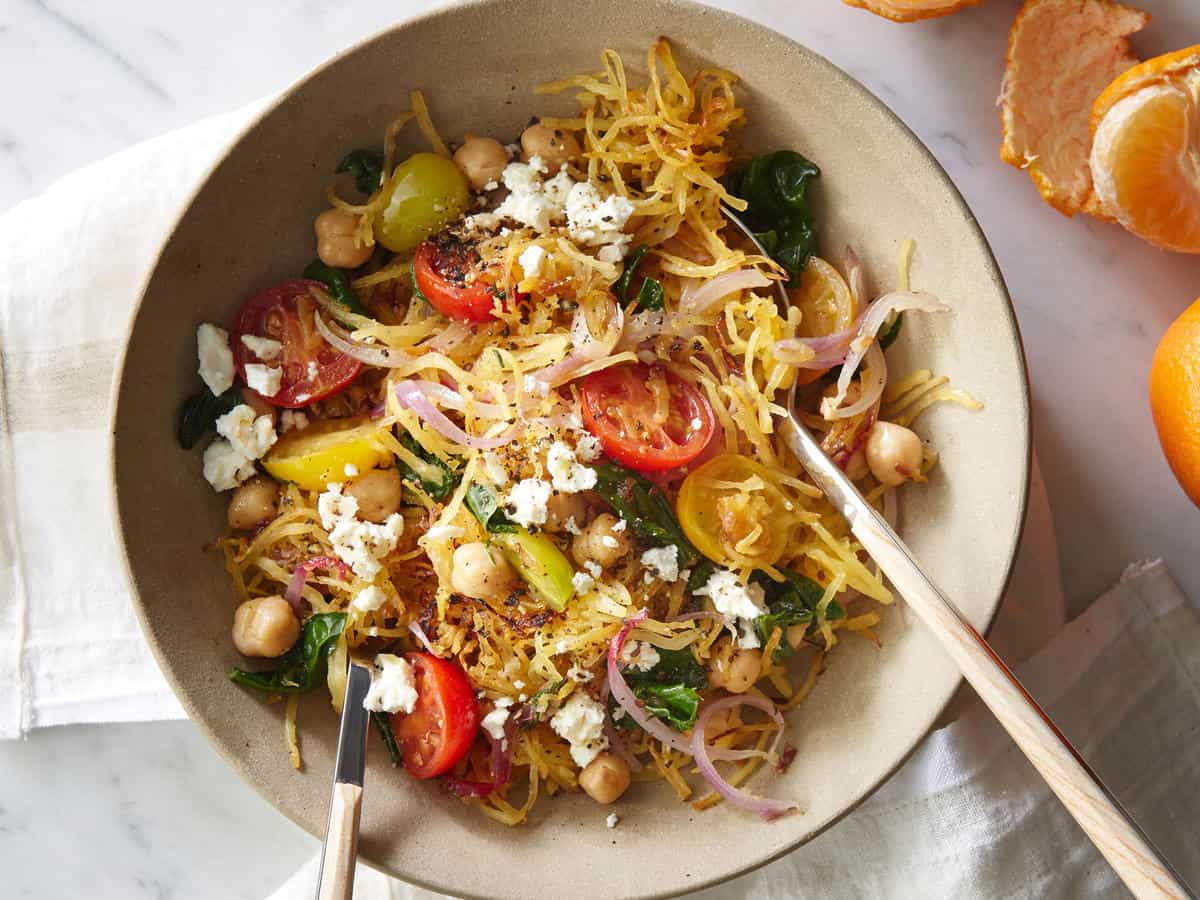 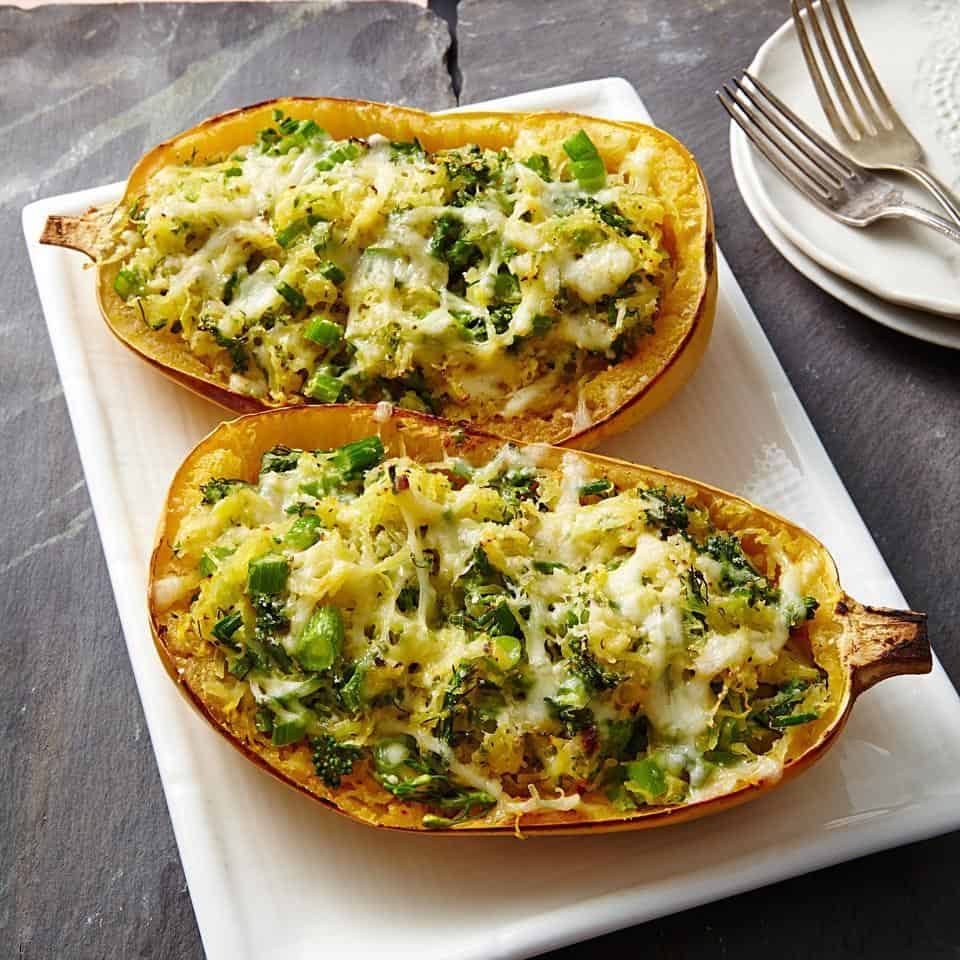 Have you ever had the experience where, as an adult, you relented to trying a vegetable you remember not liking as a kid and suddenly you realized that you love it? Well, whether it’s the way it was prepared, the natural changes our tastebuds go through over time, or just us misremembering the favour, we went through something similar recently with squash! Now we’re kind of obsessed with all kinds of squash, but spaghetti squash has really been out favourite so far. There are just so many delicious ways you can prepare and serve it! Now we’re always on the lookout for new and exciting spaghetti squash recipes we’ve never tried before.

Are you feeling just as interested as we have been, if not more, in the idea of learning how to make some scrumptious new spaghetti squash recipes but you’re not sure where to start? Check out this list of 15 of the very best recipes, flavour combinations, and tutorials that we’ve come across so far in our search!

So long as nobody in your home or at your dinner table is vegan or vegetarian, spaghetti squash actually complements meat very well, especially chicken, if you ask us. Warm summer weather always makes us crave barbecue flavours as well, so we’re sure you can imagine just how pleased we were when we came across this delicious BBQ chicken spaghetti swash recipe outlined in simple detail on Peas and Crayons.

If you’d actually prefer a recipe that doesn’t have any meat in it specifically but you’re not opposed to dairy and you kind of want the dish to be a comforting one without losing all nutritional value, then we think you’ll really appreciate this next idea featured on Domestic Superhero. Their full guide (complete with photos) teaches you step by step how to make broccoli and cheese stuffed spaghetti squash.

Are you still feeling quite intent on the idea of making a spaghetti squash based dish but you’re also hoping to make it a little heartier and more filling than most of what you’ve seen so far, like a main course rather than a side dish? Then look no further! This next recipe outlined in detail thanks to Well Plated teaches you everything you need to know in order to make your very own spaghetti squash casserole.

Have we actually really caught your attention the best so far with this whole idea of “stuffed” spaghetti squash but you just haven’t quite seen the filling idea that’s really spoken to you yet? Then here’s another delicious and flavourful option for your consideration! This recipe and tutorial from Bev Cooks shows you in detail how to make southwestern stuffed spaghetti squash in surprisingly few simple steps. 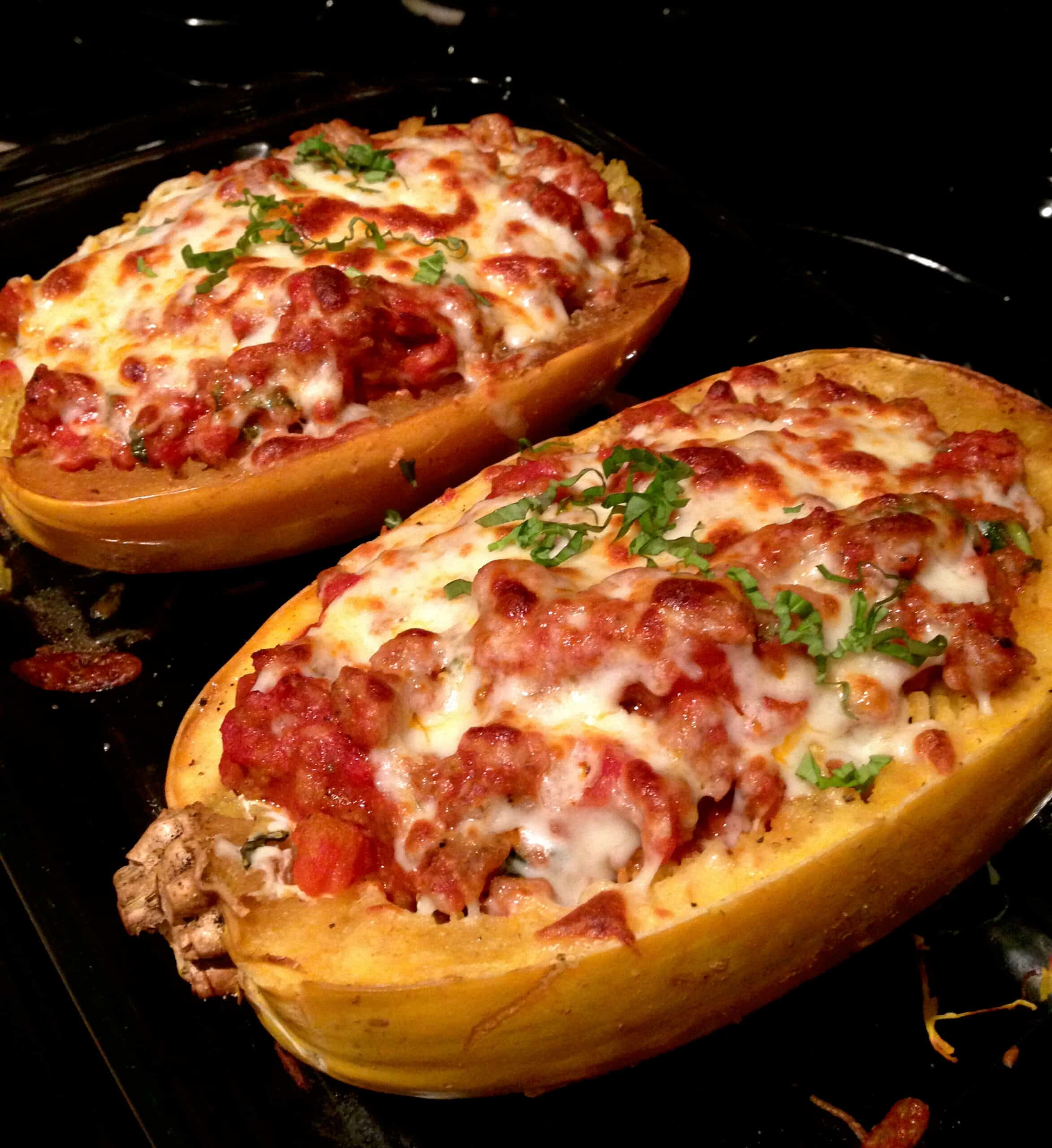 If you’re really into the whole stuffed squash idea but you’re also a lover of combination recipes like we are (there’s not much better than combining the best elements of two dishes you like in one place) then we think you’ll get a real kick out this next dish from Celiac in The City. Take a better look at their page to see how this lasagna stuffed spaghetti squash was made! We love that their entire recipe is gluten free, making this a great alternative to traditional lasagna for those who can’t have regular pasta noodles but don’t like the texture of gluten free ones.

Do you kind of like the idea of making a casserole but you’re also a rather busy person who a demanding schedule and you’ve been hoping to find a version that’s slightly faster to do? In that case, Fried Green Pickles has just about all the answers for you. Their full tutorial and detailed recipe walks you through the steps for making a delicious spaghetti squash caprese bake.

Have you actually been scrolling through our list this long because you’re the kind of person who prefers your homemade recipes to have at least a little bit of a kick? Well, if you also love the unique flavour of sausages then we’re pretty sure this next recipe from Eat Yourself Skinny is going to be the one for you. Their outline shows you nice and simply how to make spaghetti squash boats wth spicy sausage!

Are you still thinking about how much you like the idea of making a bake, casserole, or something similar but you’re also still only in the market for meat-free versions? Then we’re pretty sure Cookin’ Canuck haas just the kind of thing you’re looking for! Take a better look at their information and photos to learn more about how this vegetarian spaghetti squash skillet was made. They suggest a great combination of vegetables for good flavour, but you can always change things up.

Have we actually still got you thinking about this whole concept of spaghetti squash being a pasta replacement for those who can’t eat regular noodles or are looking for a slightly healthier alternative, but you’ve never really been a huge lasagna lover? Well, luckily for everyone, that’s not the only kind of pasta replacement dish you can use this awesome vegetable for! Instead, give this aromatic spaghetti squash pasta with basil pesto from Minimalist Baker a try.

Are you feeling torn somewhere between the idea of making a chicken recipe and the idea of making something that has a bit of spice, and nothing you’ve seen so far quite hits the nail on the head? In that case, we’d absolutely suggest taking a look at what this recipe from Recipe Runner has to offer, especially if you like Mexican food. We actually tried this green chile chicken anchilada stuffed spaghetti squash in real life and would 100% recommend it, very highly indeed.

Are you stilled rather intrigued by the idea of preparing your spaghetti squash at least a little bit like an actual pasta, but you’re definitely one for slightly milder flavours that a lot of what you’ve seen so far? In that case, we think Martha Stewart might have just the kind of dish you’ve been holding out for. Their recipe for roasted spaghetti squash with herbs is somehow light and flavourful all at once.

Like us, are you a total seafood lover? Well, we’re not sure we ever would have thought of the idea of combining seafood and spaghetti squash but now that we’ve seen it, we can’t wait to try it immediately! This recipe from Eat Yourself Skinny for lemon and herb spaghetti squash with roasted shrimp is one we’ve bookmarked and will be making for our family this week.

Just in case you’re still on the lookout for pasta-esque spaghetti squash recipes but are hoping to collect as many as you can, here’s another great suggestion for your archives, but this time with a totally different flavour in the interest of keeping things… well, interesting. Check out the tutorial on The Roasted Root to see how this roasted garlic and kale spaghetti squash with sun-dried tomatoes was made.

Did you know that there are actually also delicious spaghetti squash dishes out there that are served cold instead of warmed? In fact, spaghetti squash can make quite a tasty alternative to lettuce and other leafy greens in a salad if you’re craving a twist. This delicious Greek spaghetti squash toss outlined in detail Cooking Light is the perfect example of what we mean. It’s like making yourself a Greek salad, but with some added veggie flavour instead of a fresh lettuce crunch.

Just in case you’re actually feeling some indecision between the lasagna stuffed idea and broccoli and cheese stuffed idea that we showed you earlier, specifically, here’s the perfect blended recipe to help you make a decision! This fantastic recipe featured in simple step by step detail on Eating Well will help you prepare a spaghetti squash lasagna with broccolini that gives you the best flavours of both previous options at once.

Do you actually know of another awesome spaghetti squash based recipe that you’ve tried before and that your family loved but that you don’t see anything quite similar to here on our list? Tell us all about it or link us to the full recipe in the comments section so we can try it out too!

Can You Freeze Spaghetti Squash? Here’s Everything You Need to Do To Get It Right