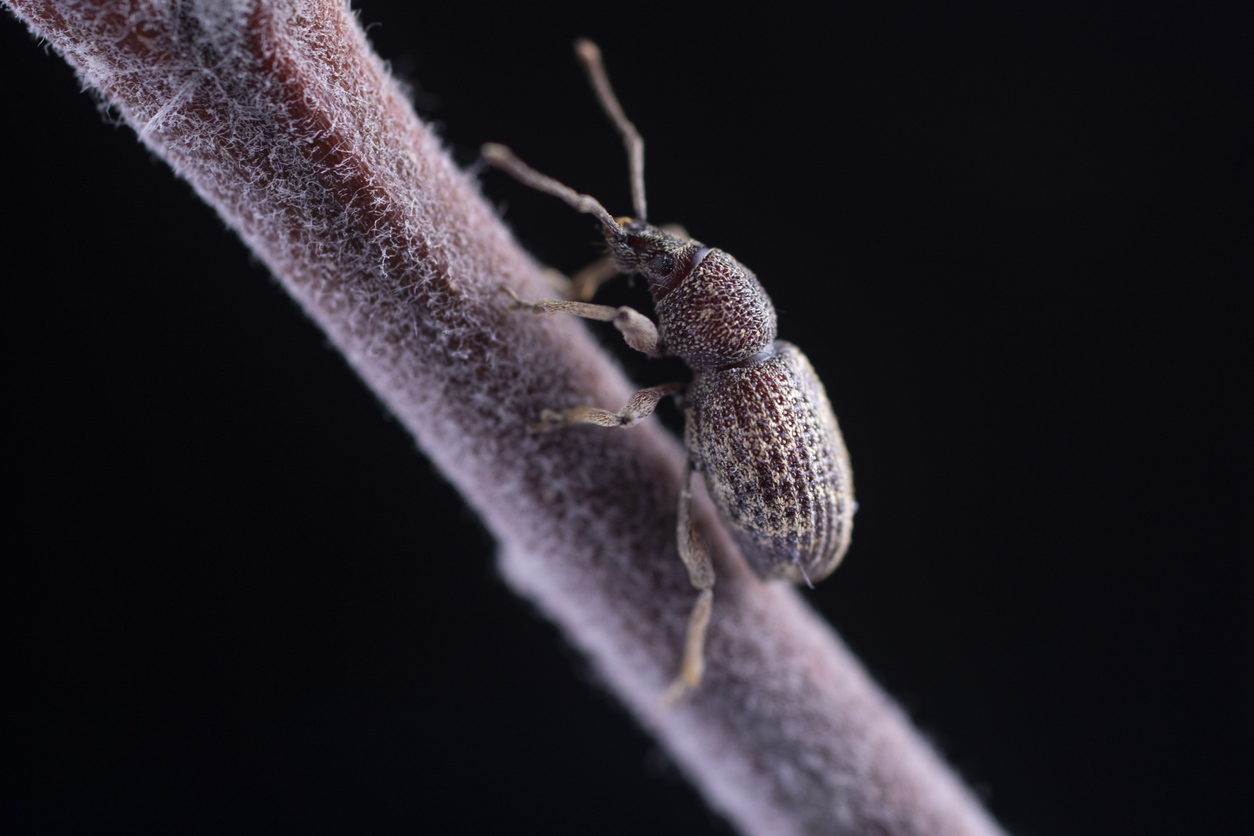 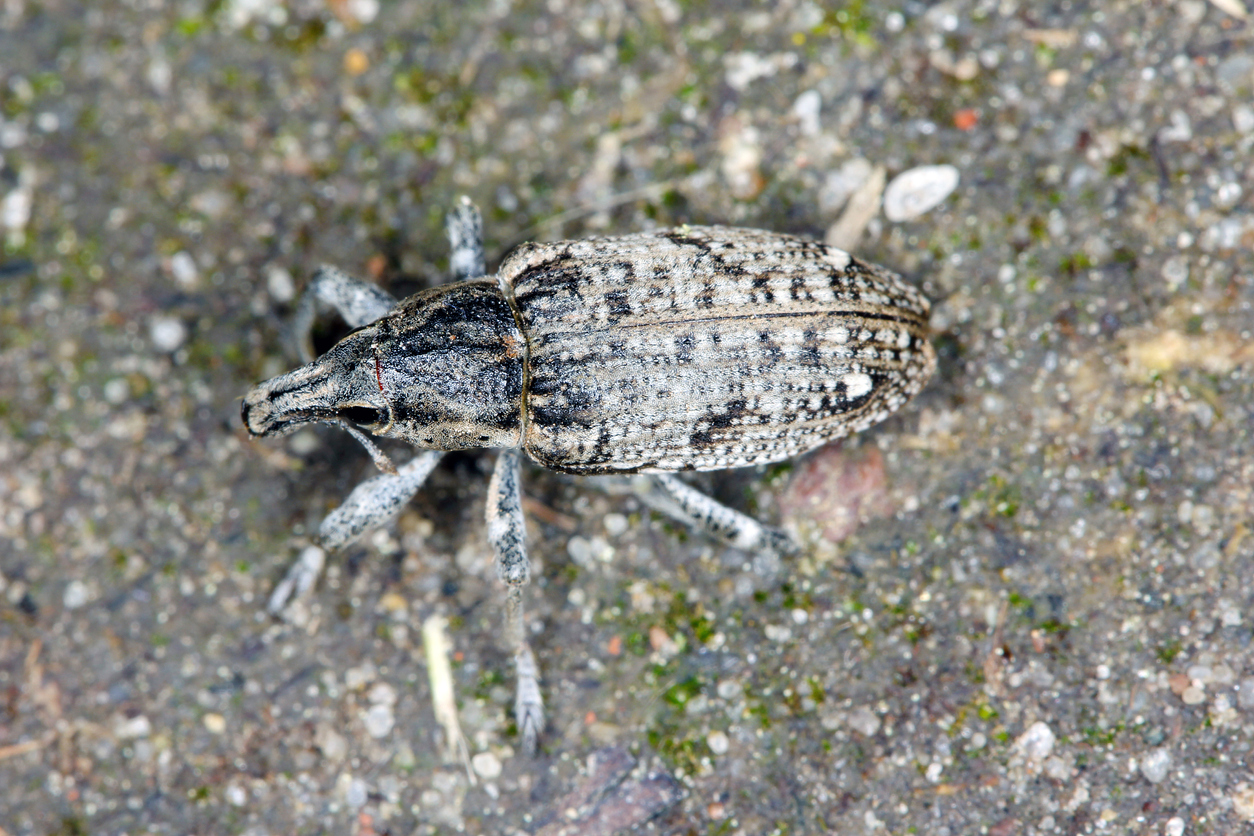 If you thought aphids were a peril to the crops in your garden, you obviously haven’t met the root weevil. Dubbed by some as the root of all evil, these voracious insects can go through a whole veggie patch and single-handedly bring it to ruin. It’s a reputation that the root weevil does its best to cement and fortify.

When gardeners see the signs of the dreaded weevil infestation, they usually give up and consider their flowers, crops, or vines as good as gone. But just because the root weevil has a hard shell encasing its body and a far-reaching snout doesn’t mean that it’s indestructible. Read on to find out how to control root weevils and keep their damage to a minimum.

Although the root weevil is nothing more than a glorified beetle, it by far has more devastating effects on your garden than the average beetle. Weevils are smaller in size than beetles but more determined and focused. As summer pests, they spread through your garden attacking everything from veggies to flowers, shrubs, and trees.

The average root weevil measures no more than a half-inch in length. It’s not easy to miss with its hard body, triangular-shaped head with a long snout sticking out of it, and crooked antennas. Unlike beetles, weevils have an antenna with a joint at the middle that looks like an elbow. The body is either black or brown, and despite the leathery wings, the insect cannot fly or run. It is a slow mover that crawls from one leaf to the next, slowly munching and laying eggs where it feeds.

Generally speaking, root weevils attack any plant as long as it has sap flowing through it. From trees and shrubs to vines, flowers, and vegetables, every live plant is on the weevil’s menu. They feast on grapes and blueberries with the same gluttony as attacking laurels, rhododendrons, and hemlocks. This is what makes it one of the most devastating pests in any garden. No vine or tree, no matter how high, is beyond its reach. 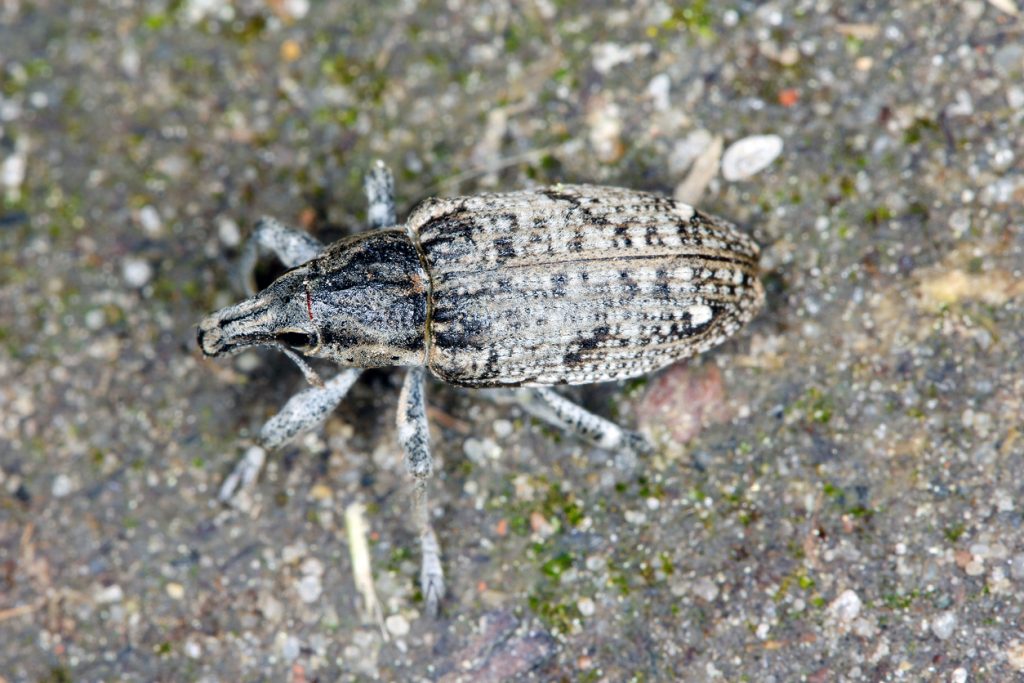 Besides attacking growing plants, some weevils put their strong jaws to good use and attack grain storage facilities causing millions of dollars in damage in their wake. That’s why you should identify the symptoms of a root weevil infestation as early as possible. This could be the difference between a healthy garden and one that’s left in ruins. Here are some of the symptoms you would encounter.

Although they might look the same to the untrained eye, weevils come in different varieties. Some, like the strawberry root weevil only attack strawberries and raspberries. Other weevil species don’t make such a distinction and go after any plant that comes their way. Here are some of the most common weevil species that you might encounter.

The Life Cycle of a Root Weevil

Since root weevils feed on different parts of the plants at various stages of their life, it’s important to understand the life cycle of the root weevil. That helps you know where the threat to your garden is coming from and meet it with the adequate control method.

The life of the weevils starts in the spring when the eggs laid by the adults hatch near the base of the plants. Immediately the larvae start burrowing in the soil in search of roots to feed on. This is usually the most destructive part of the root weevil’s life. The larvae will go undetected until they emerge from underground. During that time, they keep pruning the roots of the plants, which impacts the plants’ growth and health.

By May or early June, the mature root weevil breaches the surface of the soil. If the weather is too hot, the weevil will migrate to the house, where it will cause more than just a nuisance with its bites and food damage. But most often, the weevil will just keep climbing up the nearby plants as it moves toward the top for the young shoots and flowers.

How to Control Root Weevils

As we have seen, the root weevil has a lot going for it. It starts its life underground away from the prying eyes and the few natural predators it has. And by the time it emerges from the ground, it’s fully grown with a hard shell to protect it. That leaves you with two options as far as controlling this pest is concerned—either organic methods or chemical pesticides.

This is usually the best eco-friendly solution to combat the threat of the root weevil. However, it also involves a lot of work on your part. The good news is, it is quite effective, and if you combine more than one of the following options, you’ll keep your garden and home safe.

As with all chemical pesticides, there’s an element of risk not just to the other plants in the garden but to the pets and children as well. The toxins in these products could be absorbed by your veggie plants and find their way into the food you harvest.

Most commercial pesticides that work against root weevils have active ingredients such as bendiocarb, acephate, bifenthrin, and chlorpyrifos. However, some of these chemicals are not allowed in certain states. So check the local laws in your state before you purchase a pesticide online.

Tips for Controlling the Root Weevil 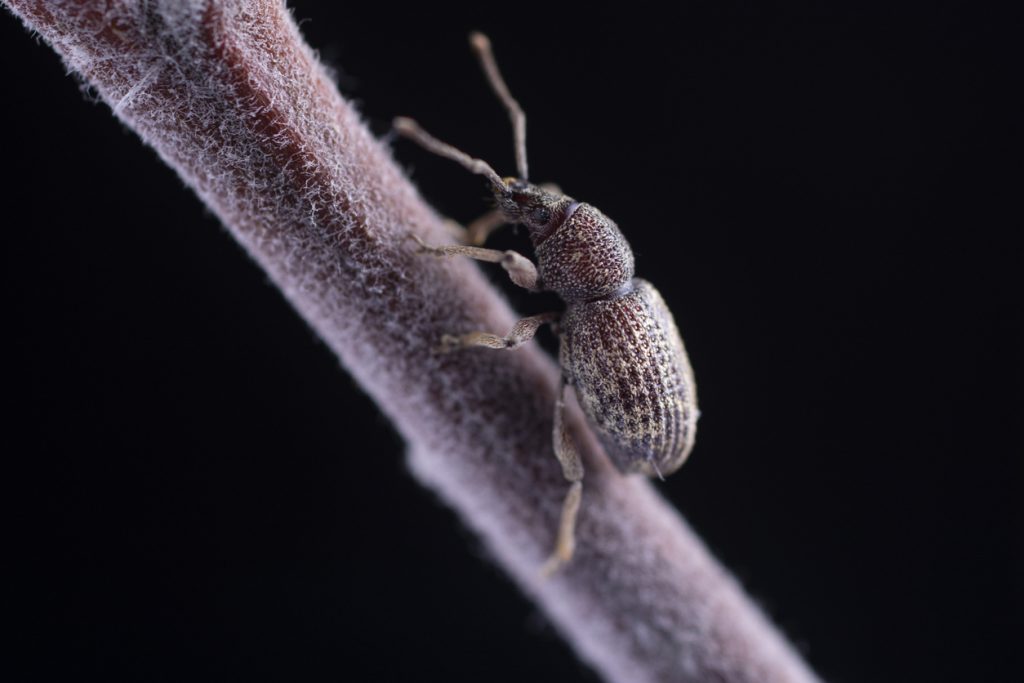 As complex as controlling the root weevil is, it pays to be vigilant and stop those destructive beetles in their tracks before they find an opening in the defenses you set up around the garden. Here are a few tips to help you along the way.

How to Repot a Plant Safely, Including Root-Bound Houseplants