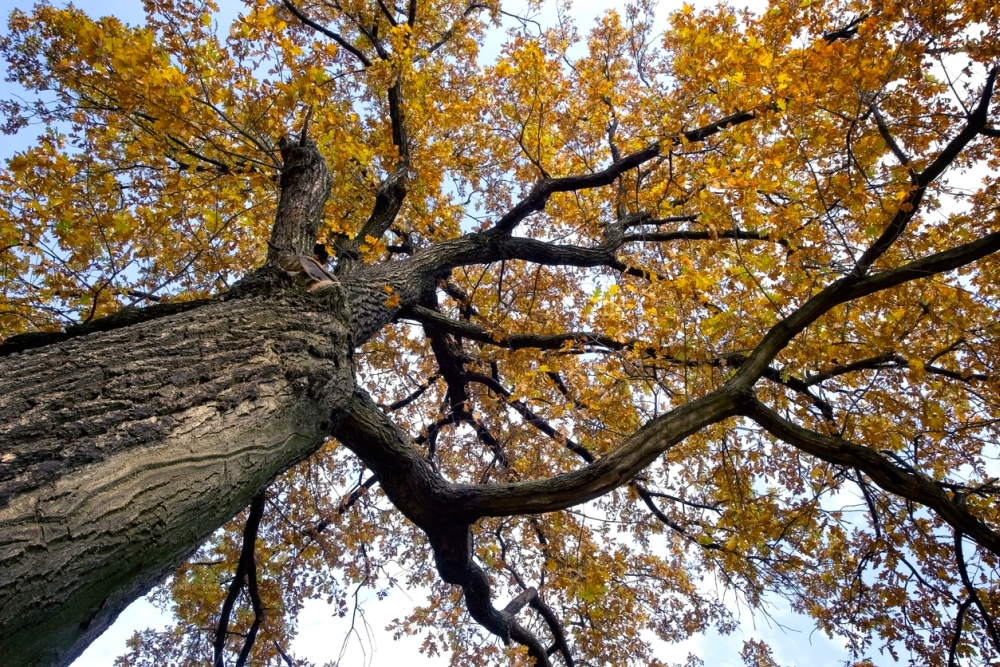 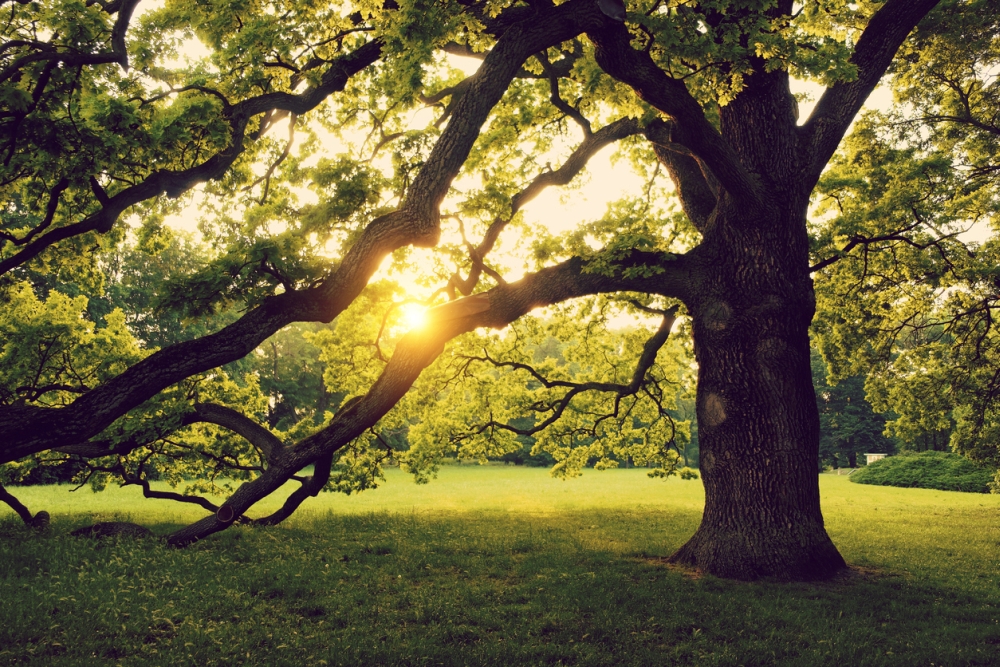 The stately oak is a mighty tree to have on your property. Tall, graceful, and with acorns to offer, it has everything you’d want out of a tree. So if you have the space for this giant, you’re probably considering growing an oak in your lawn or garden. They are easy to grow and once established, they become, more or less, independent.

But for all their advantages, oak trees come with their own specific problems. And despite their extra-large size and hardy nature, these trees have a few soft spots which pests take advantage of. And before you know it, the oak is sick and needs your intervention. Some of these health problems can be lethal, while others are more of a nuisance to those around the tree than the oak itself.

One of the first surprising revelations you’ll discover when you grow an oak is how easily the tree will succumb to a disease. It’s a sad fact of life that such a giant of a tree would die within a few months of contracting a seemingly innocuous disease. But this is what happens when the oak is infected with oak wilt.

Oak wilt is a fungal disease that spreads among red and black oaks more than white oaks. It either spreads through root contact or boring beetles. This highly contagious disease is caused by Ceratocystis fagacearum, which causes the tree’s demise within as few as four months after infection. Even white oaks which barely show any symptoms of infection would die within 5 to 7 years after catching oak wilt.

Symptoms of the disease include whole branches of the tree turning brown and shedding off their half-green leaves. If you cut one of those branches, you’ll notice dark circles in the texture. Although these symptoms are similar to other diseases such as anthracnose or lightning strikes, the dark circles are conclusive proof that your oak is infected with oak wilt.

Unfortunately, there’s no cure for oak wilt. Once it hits a tree, the only thing you can do is save the rest of the oaks in the vicinity. You’ll need to take down the oak as soon as you discover the disease and work to separate the roots underground within 50 feet of the infected tree.

And to prevent the fungal infection, keep bark beetles from your oaks. They’re usually attracted by the scent of fresh sap, so prune your oaks in the fall since boring beetles are active in the spring and summer. When you cut a branch, cover the wound with paint to hide the smell of the sap.

We all know that oaks produce acorns. So when you see round formations on the branches of the mature oak that look like apples, you might be tempted to try them out. One word. Don’t! These are not fruits, they are apple galls. They’re nothing more than deformities in the branches caused by wasps. Female wasps often lay their eggs in the vein of the leaves. The chemicals which the wasp injects along with the eggs cause the tree to develop these galls around the eggs. So these galls are in fact the result of an allergic reaction to the wasp eggs. Only red, black, or scarlet oak trees develop them. White oaks seem to be immune to this disease.

Each gall contains a wasp egg inside. The gall starts off as green with red spots and feels rubbery. After the young wasp develops and leaves the gall, the gall will crumble and dry out.

Oak galls don’t harm the oak tree. At most, they’re just an inconvenience that causes the leaves to fall off some branches while those green galls keep growing. That doesn’t stop some people from trying their best to get rid of these monstrosities and keep their oaks looking healthy and “normal”.

Another reason you’d want to get rid of oak galls is to control the population of wasps in the neighborhood. Wasps are not the best insects to have around the garden or lawn. So use sterilized pruning shears to snip off the green oak galls as soon as you see them develop on the branches. Dispose of the galls safely by burning them.

Few oaks can survive the sudden oak death disease. One day the oak is growing and looking for all intents and purposes very much alive. Then the next day it’s dying on its feet. This swift disease is caused by Phytophthora ramorum, a fast-acting fungus that infects red and black oaks in California and Oregon. However, there are indications that the disease is spreading to other parts of the country.

The symptoms of the disease include the emergence of cankers that ooze and the leaves at the top turning yellow then dying. The same fungus that starts this nightmare also infects other plants including huckleberry, California buckeye, and bay laurel among others. So there’s a good chance, the fungus is spread from one infected plant to the oak.

There’s nothing you can do about sudden oak death. Once the tree is infected, you can only try to save other trees in the vicinity. So cutting down the tree and disposing of it safely is the prudent thing to do.

You can take precautions to prevent the spread of the disease by keeping the oak tree at least 15 feet from the nearest tree, especially the species susceptible to the disease.

And to protect the healthy oaks from the disease, spray them with Agri-fos, a fungicide that prevents this lethal infection. Also, avoid planting oak trees in areas where other oaks have been infected before.

We already talked about oak galls and how they are nothing more than shielded nests for wasp eggs. But these apple-like galls also attract other insects which live in them rent-free. We’re talking about gall mites. These tiny aggressive insects attack humans and leave a trail of painful bites in their wake. So what attracts mites to oak galls in the first place?

It’s simple really. The opportunistic female mite takes advantage of the cozy and secure bubble which the female wasp has created. So after mating, the female mite lays its own eggs in the gall but not before injecting the hapless wasp larva and effectively paralyzing it. Who said nature wasn’t metal?

So instead of having a single was emerging from the oak gall, you’ll have a swarm of tiny mites graduating only after one week of incubation. And if you thought one mite was bad, think what an army of them can do. Once they’ve fed on the wasp larva, they leave the gall in search of food.

Unlike wasps, mites only take about a week from the time the eggs have been laid until they’re ready to attack every living thing in the vicinity. So you need to act fast and get rid of the oak galls as soon as they develop. And since they usually emerge in the late summer, you can take precautions and avoid oaks with galls around this time. Always wear long sleeves when you go outdoors to cover your upper body and arms since these are the places that the mites attack.

Whether you consume acorns or have no use for them whatsoever, having healthy acorns is part of the perks of growing an oak tree. So when you see unsightly formations growing out of the young acorn, you have every reason to be concerned and even alarmed.

Known formally as knopper galls, these deformations are caused by wasps just as these insects also cause apple galls to appear on oak leaves and branches. Knopper galls are the oak’s response to eggs and chemicals injected by the female wasp in the bud of the tree. The deformities increase in size as the wasp larva inside grows. And while they cause no harm to the tree, the deformed acorn itself becomes unusable and apart from looking ugly, you shouldn’t try to consume it even in survival situations.

There’s also another side to the story. Just as apple galls attract mites that use them as breeding grounds, knopper galls also attract female mites that lay their eggs in them and launch a swarm of more than a quarter of a million hungry mites in the neighborhood by the end of the summer.

You should follow the same precautions when dealing with deformed acorns as you did with apple galls. But instead of snipping off the gall, you should go ahead and cut the whole acorn. This is actually an easier way to get rid of both the wasps and mites in one strike.

After you cut all the infected acorns, burn them in a remote corner. Stay vigilant and actively remove any emerging galls between spring and summer.

Xylella or oak bacterial leaf scorch is a bacterial disease that turns about half of the oak leaf yellow while the rest of it stays green and seemingly healthy. This is similar to other lethal diseases which affect oaks such as oak wilt. Another problem with xylella is that it’s hard to diagnose. Most often you’d think the leaves are just turning yellow before their time or maybe this is just lightning damage.

But you have every reason to inspect these browning leaves further. Because xylella is also a fatal disease and the oak will eventually die within five years of getting infected. The disease also infects elms, mulberry trees, cherries, maples, sycamores, and sweetgums among others. Leafhoppers are often blamed for carrying Xylella fastidiosa, the bacteria that causes the disease.

As with all lethal oak diseases, there’s little you can do to cure the tree. The scorched leaves could appear on just one branch of the tree but they will soon spread to the rest of the canopy. Only red and black oaks are susceptible to this disease so to prevent the disease, you can grow only white oaks.

Some recent studies recommend treating the infected oaks with Tetracycline. However, the antibiotic has only managed to slow the progress of xylella without eradicating it completely. So the best course of action is to cut down the infected tree especially if there are susceptible tree species in the area.

Types of Oak Trees: Know Which Oak Tree Is Best For Your Garden

Oak Tree Care – How To Grow And Care For Oak Trees