When it comes to fun visual patterns, we love anything that helps us add a bit of texture to the room. Of course, this can mean actual texture that you can feel, like faux fur or leather, but it can also mean visual texture that give you all kinds of shape and angle to consider! Our very favourite example of this is herringbone; there’s just something so versatile and appealing about the pattern that makes us like it in any piece we see it in, especially if it’s homemade! That’s why we always have out eyes peeled for new ways to crafting with herringbone.

Just in case you’re as in love with the idea of making DIY herringbone pieces for your home as we were, if not more, here are 15 of the best and most creative designs, ideas, and tutorials that we’ve come across so far in our search for inspiration! 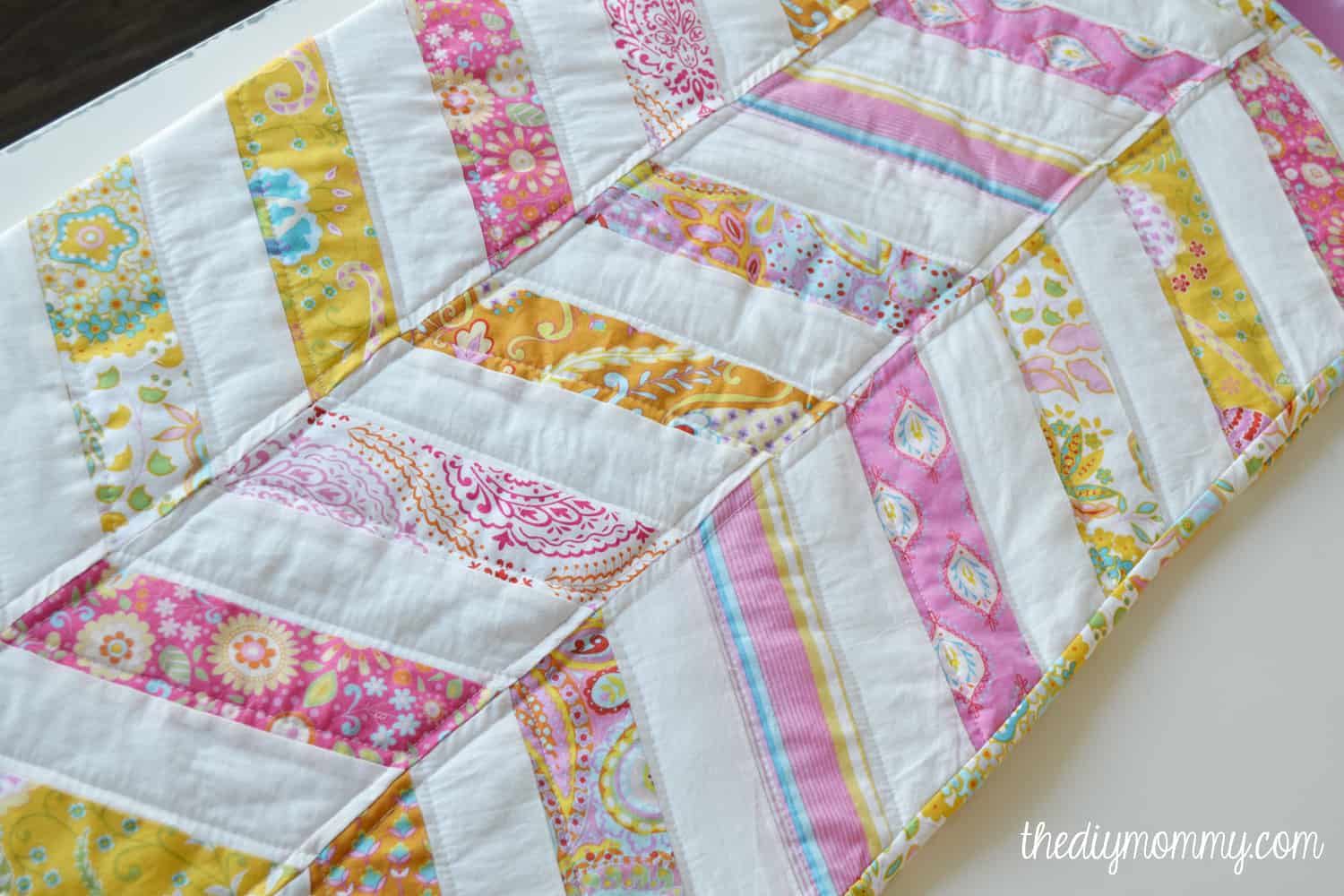 Perhaps your very best DIY skills usually lie in working with soft materials, making you a fantastic sewing enthusiast? Well, whether you’re an experienced quilter or not, this fantastic tutorial from The DIY Mommy walks you nice and easily, step by step, through the process of making a stunningly colourful and patterned quilt where the strips of different fabrics sit in a herringbone pattern. 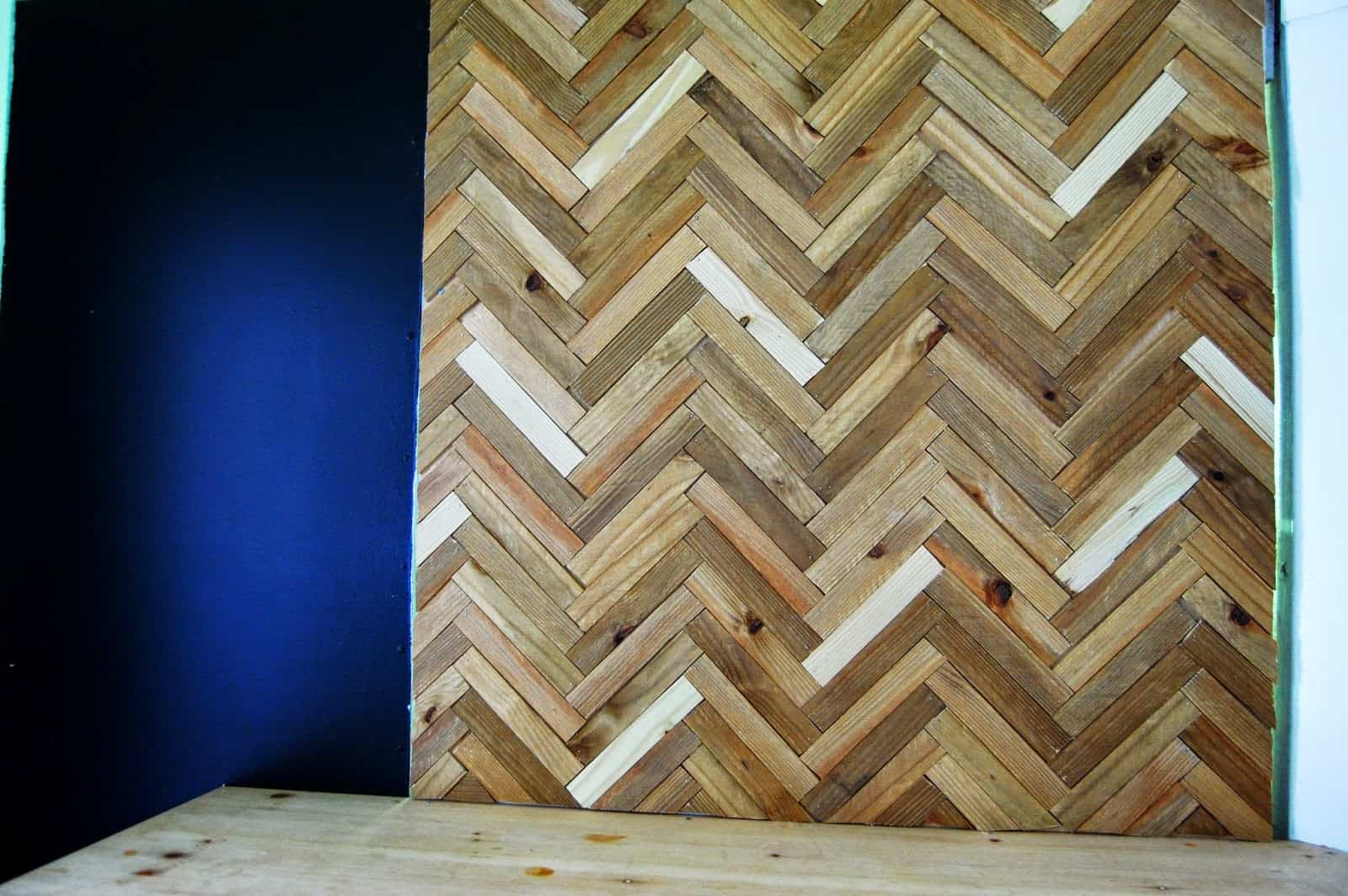 Are you actually so in love with the idea of making something herringbone influenced for your home that you think you might prefer to create a more permanent statement piece? Well, particularly if your home has a lovely rustic aesthetic, we think you might get a real kick out of the way Gorgeously Impractical created a herringbone wall from scraps of reclaimed wood.

3. How to paint herringbone 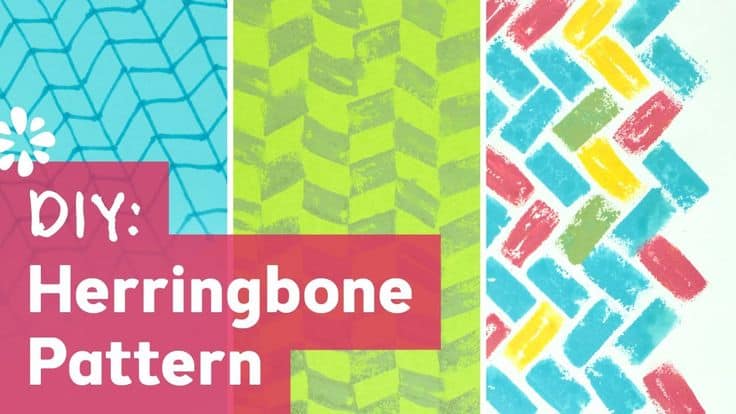 Usually, when you get crafty, are you the kind of person who likes to work with paints the most, because that’s where you feel your most confident skills lie? In that case, we’d definitely suggest taking a look at how Sea Lemon painted different types of herringbone patterns in all different ways! We love the way their different techniques result in slightly different iterations of the same basic pattern. 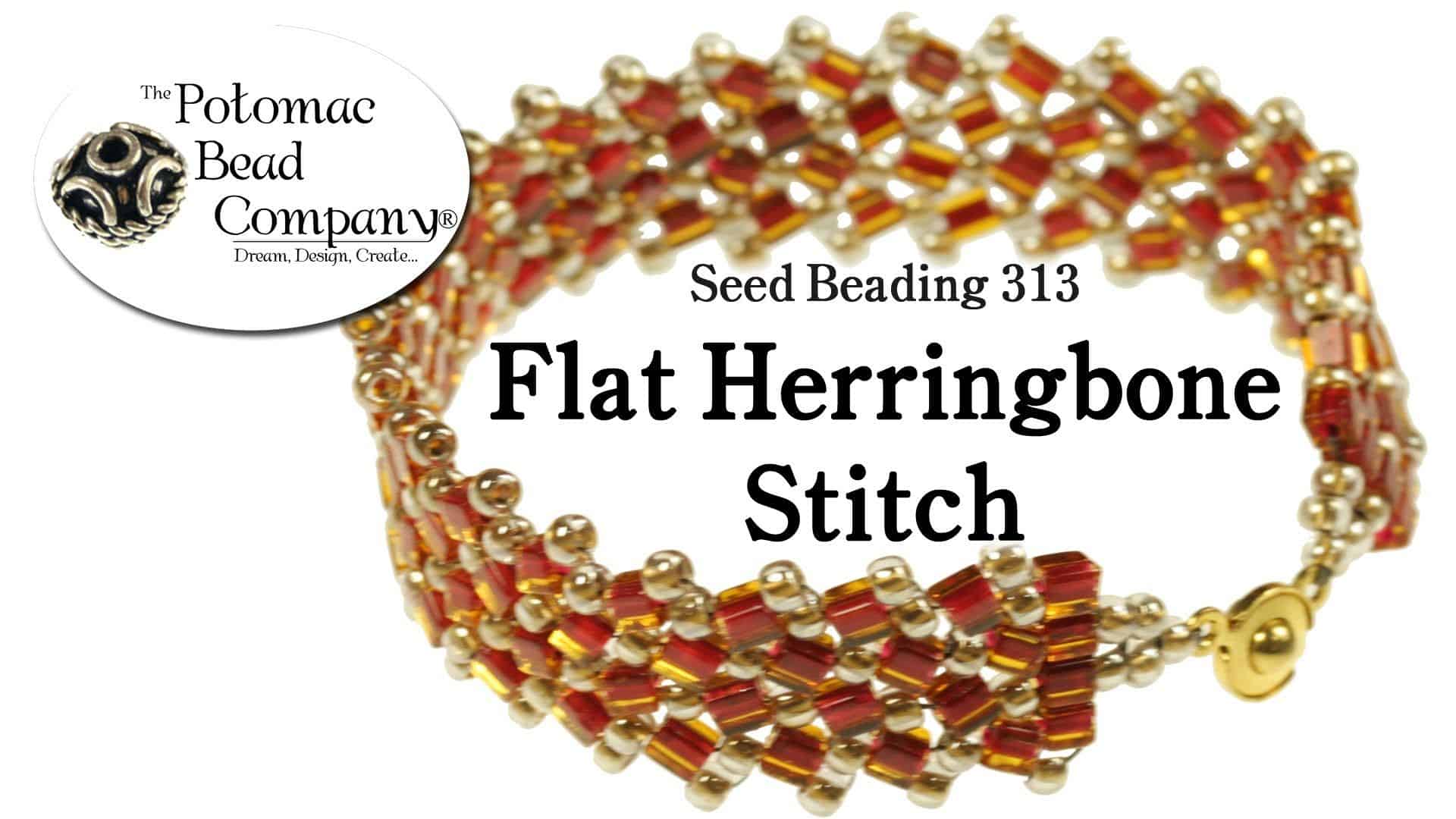 Are you actually starting to think that you love herringbone so much that you wish you could wear it on you more regularly, but you’re not sure you’d like to commit to a whole shirt or dress? Well, if you’ve ever been a fan of jewelry making, we have a feeling you’ll really enjoy this guide from The Potomac Bead Company that teaches you step by step how to make a lovely herringbone seed bead bracelet that is actually a lot simpler to make than it looks. 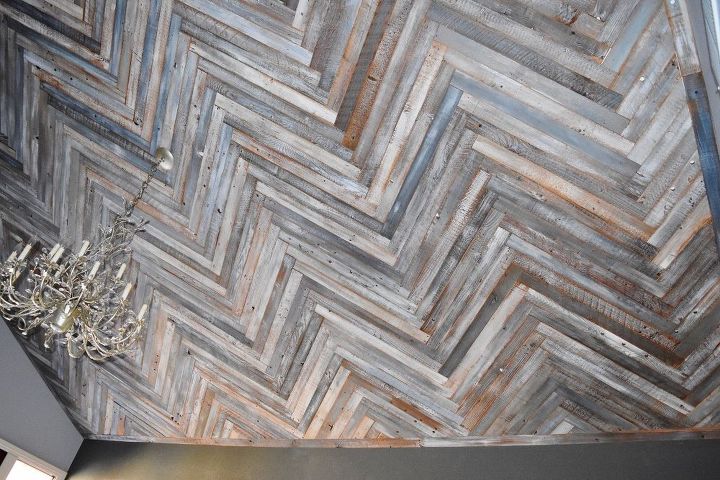 Were you actually quite taken indeed with the concept of making a herringbone wooden wall but you don’t have any spare walls available for decorating just now and you’d rather make something a little more uniquely placed or attention grabbing? In that case, we think you just might be the perfect person to give something like this reclaimed wood herringbone ceiling piece featured step by step on Hometalk a try!

Did we really catch your attention when we started talking about the idea of painting herringbone onto things in different ways? Well, one of our favourite ways to paint is on fabric because we love being able to customize material things. That’s why these fantastic fabric painted seemed like such a fantastic idea to us! Addicted 2 DIY shows you how to make it happen with really neat, even edges thanks to tape stencilling. 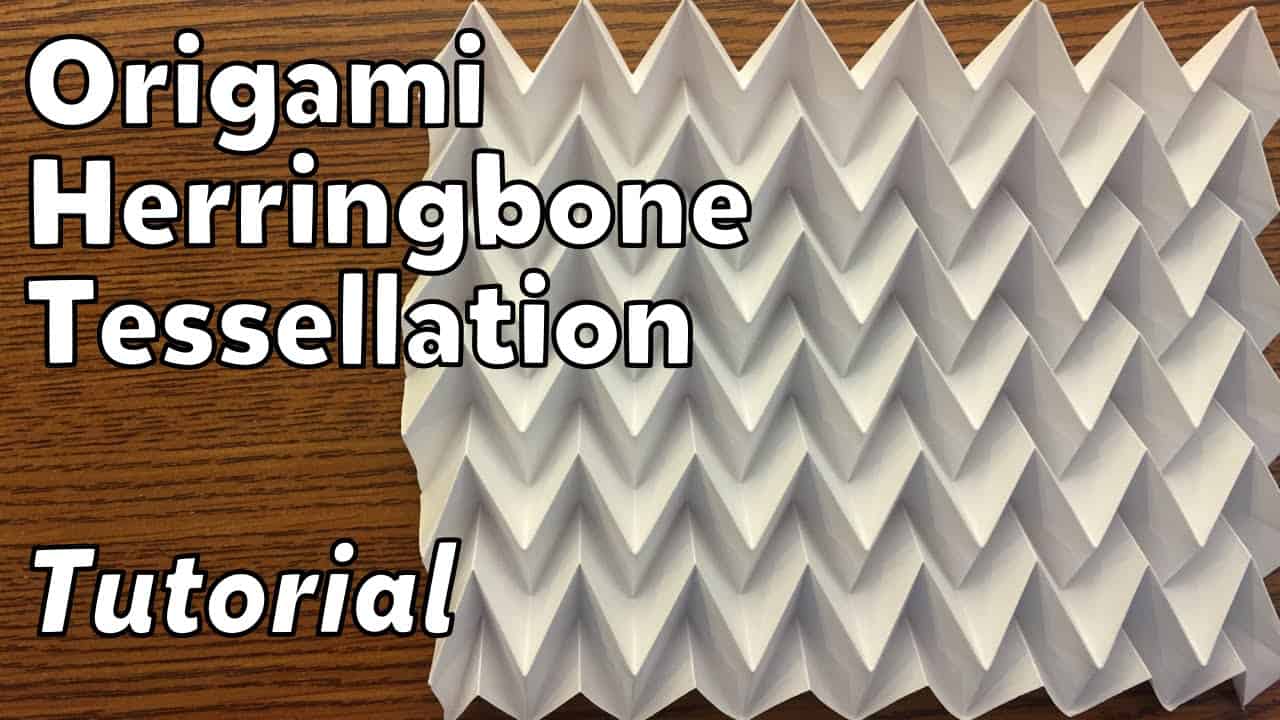 Have you always been the kind of hands-on person who loves to create something structured out of something simple and maybe even a little shapeless? Well, if you’ve ever tried origami before, we’d be willing to bet you enjoyed it just as much as we did! That’s why this fantastic herringbone tessellation project outlined on James Randolph seemed like such good fun. 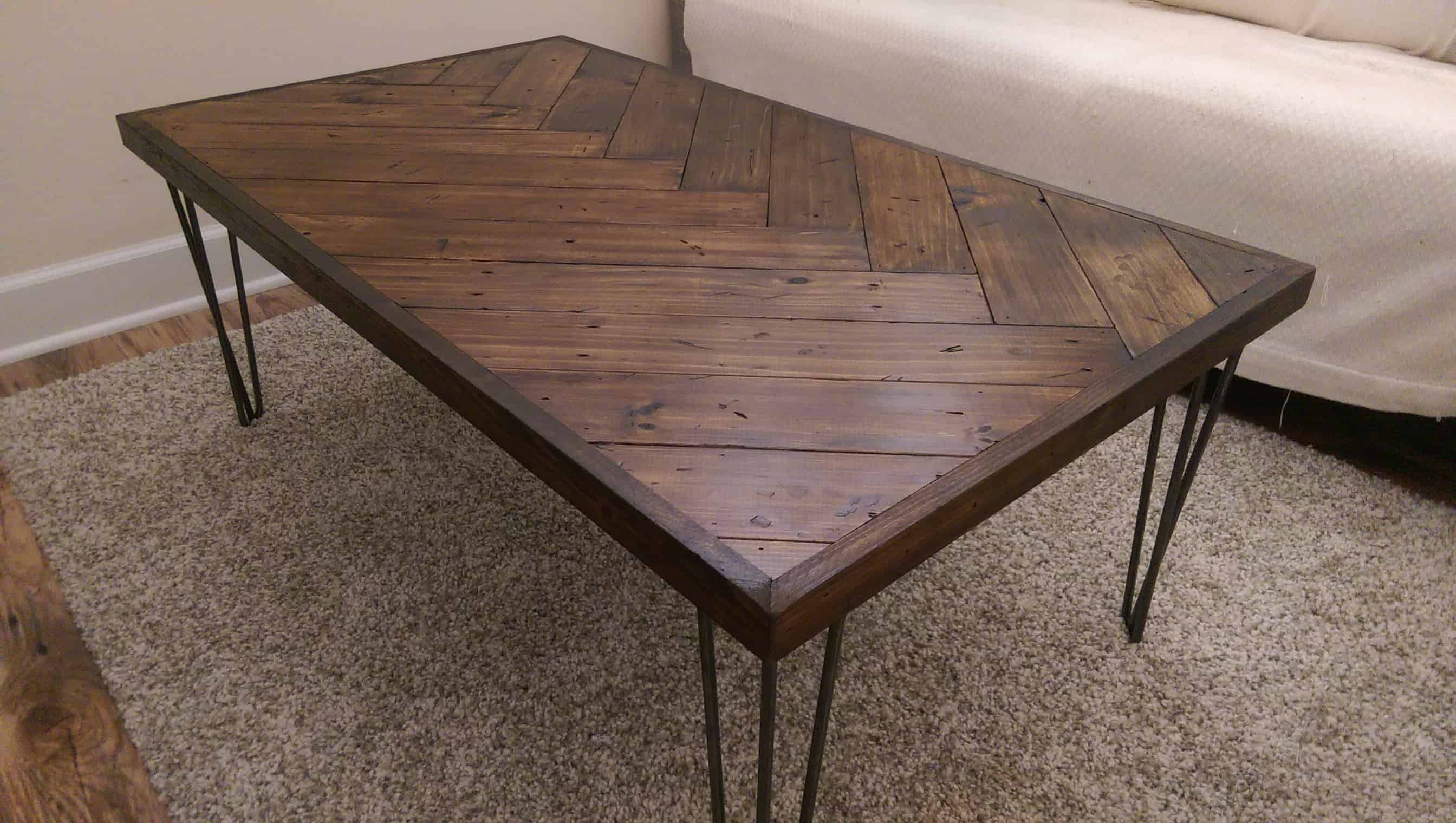 Are you actually still finding yourself thinking about how much you loved the interlocked wooden herringbone techniques we showed you several times earlier on our list but you’re just not quite ready to commit an entire wall or ceiling in your home to the pattern quite so permanently? In that case, we’d definitely suggest taking a look at how Lexilee711 used a similar technique to make a beautiful coffee table instead! It’s a slightly less permanent way to enjoy that same look. 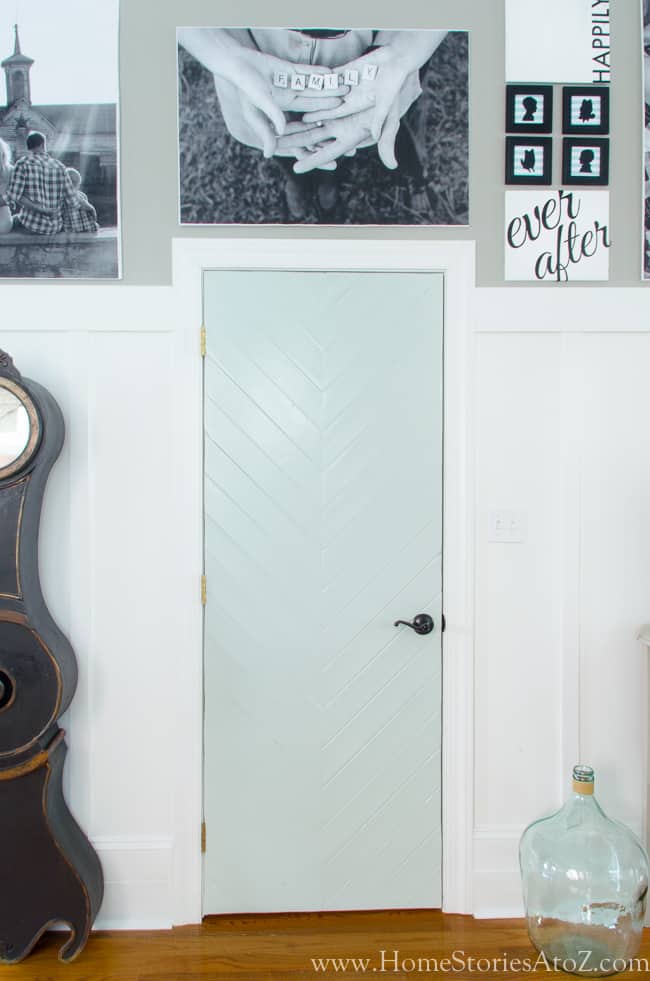 Just in case you’re still thinking of ways to add slightly more permanent and statement0making elements of herringbone to pieces of your home, here’s another fantastic tutorial that will help you add something so unique people will hardly believe you made it happen yourself! Take a better look at Home Stories A to Z to see how they made this fantastic painted herringbone door. 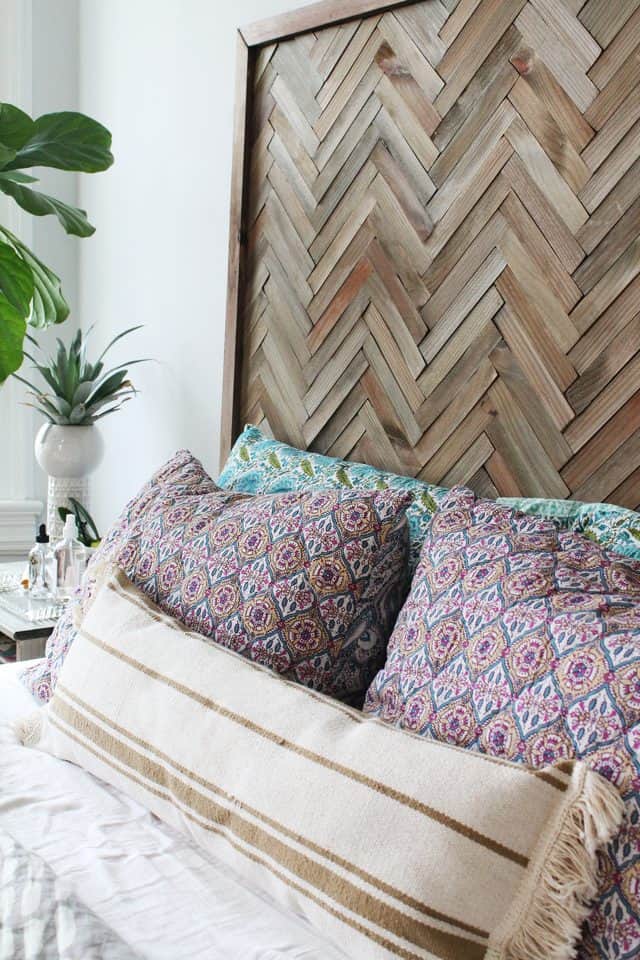 Don’t despair just yet if you’re still in love with the idea of wooden herringbone projects but you still haven’t found the perfect one for you! We’ve got another awesome alternative project outlined step by step thanks to eHow. They show you all of the materials and techniques you’ll need in order to make an awesomely interlocked herringbone headboard that has a rustic feel. 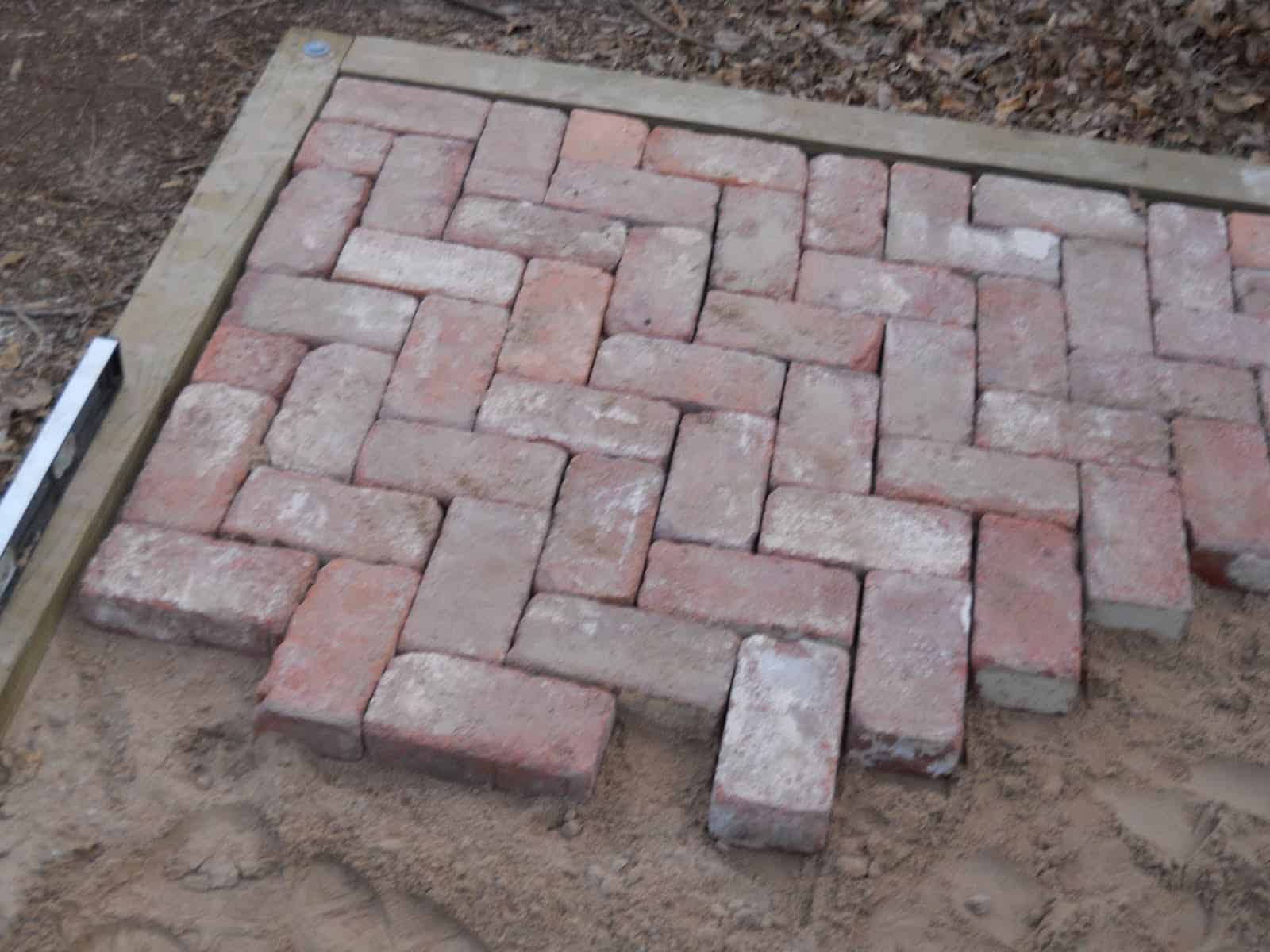 Wooden projects aren’t the only kind that you can use lovely fitted interlocking techniques for, just in case weathered and rustic things aren’t really fitting for your home. This particular type of herringbone project can also be created by interlocking bricks. That’s precisely what you’ll see if you take a better look at this fantastic patio DIY featured in full detail on OK Path. 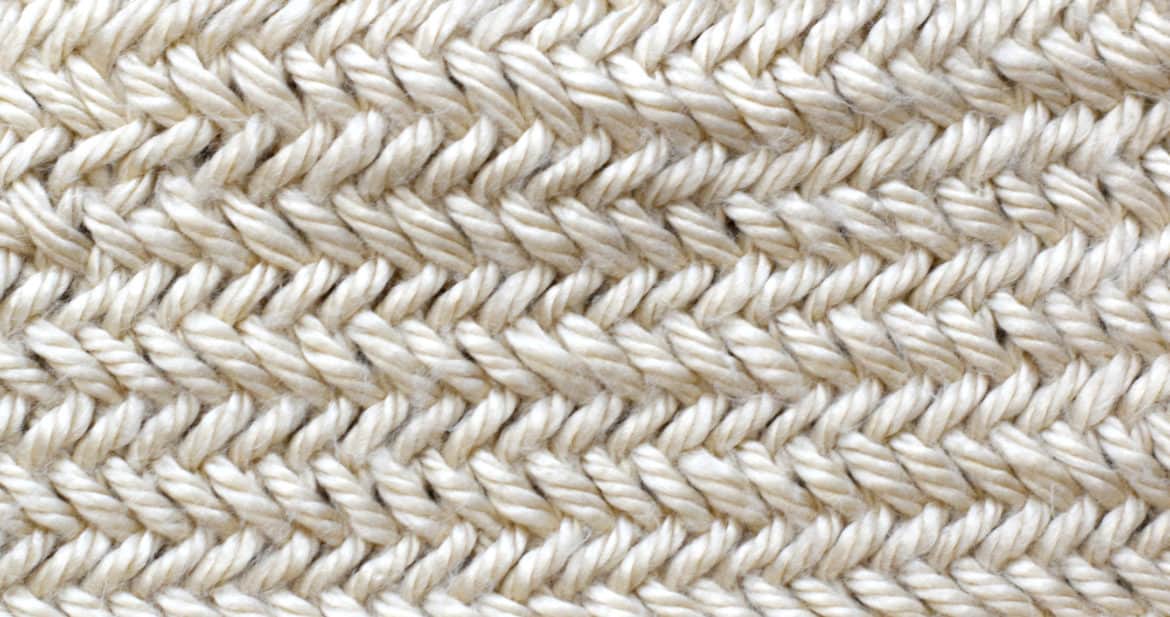 Perhaps you’ve been looking for a herringbone project that’s a little softer to create, like the fabric things you saw earlier, but painting and sewing have never really been your fortes? Well, if you’re good at working with yarn instead then we think we just might have found the perfect project for you! This tutorial from Mama In A Stitch teaches you how to do a herringbone stitch that looks just like the pattern you love so much. 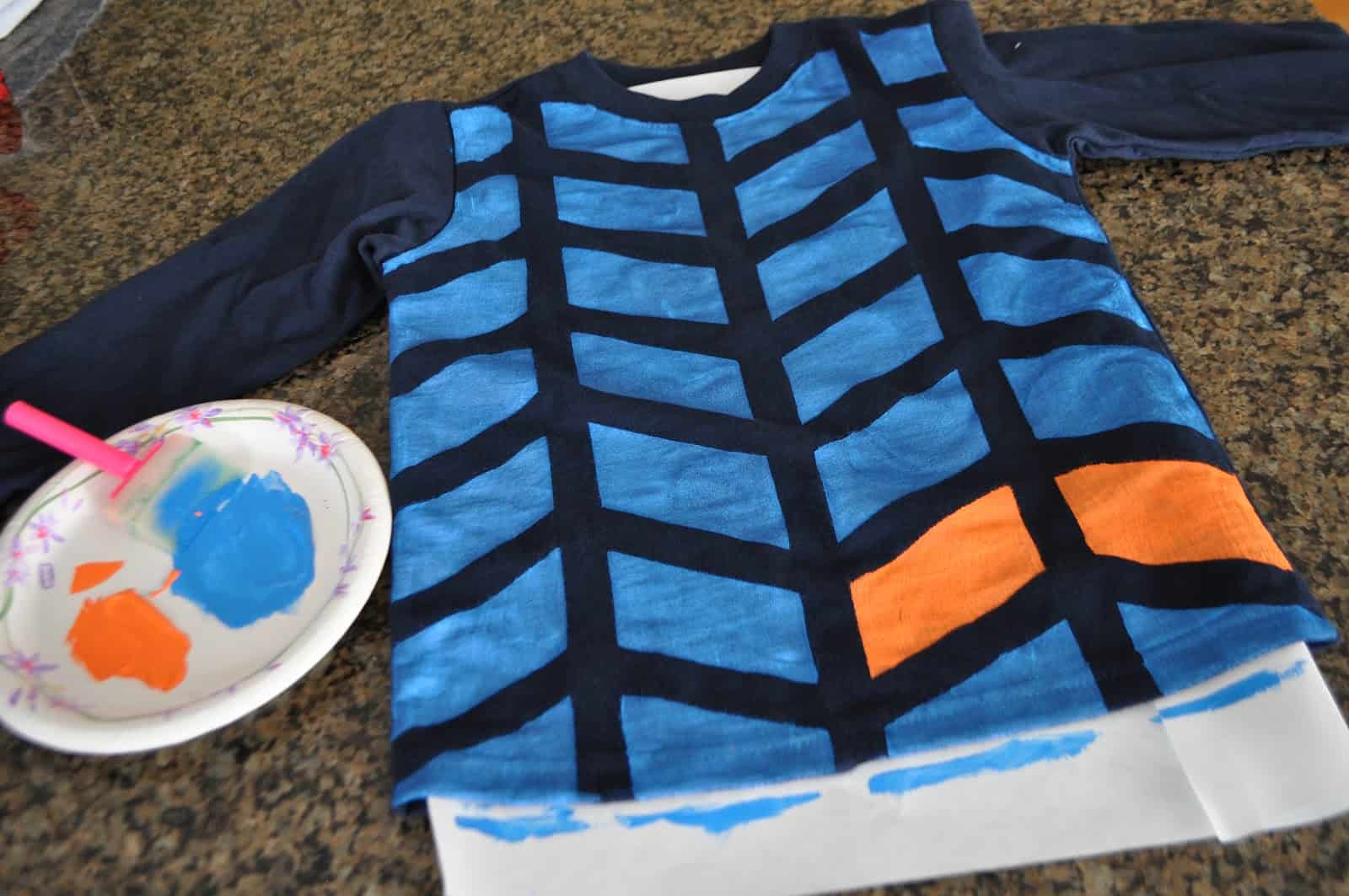 Are you still thinking about how much you like the idea of painting a herringbone pattern onto some fabric but you’d rather make something that gets worn rather than something that hangs in your house? In that case, we think you might really appreciate the way I Love to Create created a cool colour blocked style herringbone shirt in a cute kids’ size and nice, bright colours. 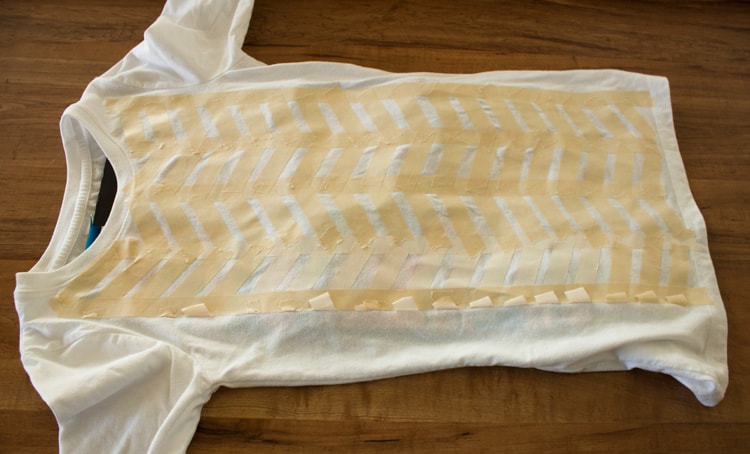 Did you quite like the idea of a hand painted herringbone t-shirt but you’re convinced you’d do better with a slightly more delicate design, rather than the chunky, colour blocked version we showed you a little earlier? In that case, we definitely think you should take a look at the way Fluffyland made a much thinner and more delicate looking herringbone pattern on their shirt by creating their own masking tape stencil to paint over. 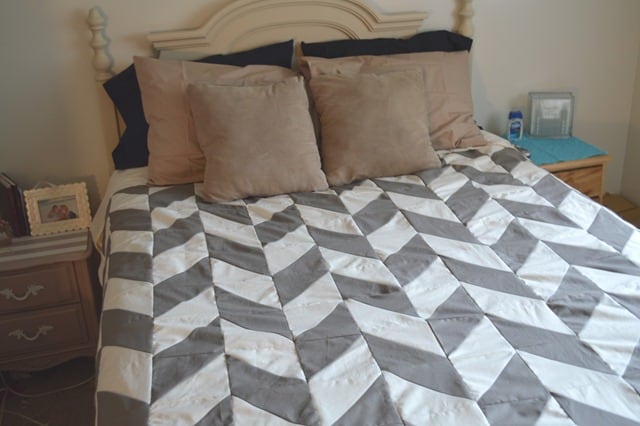 Maybe you’ve found yourself still thinking about the original herringbone quilted blanket idea we showed you on our list but a small blanket just won’t quite do because you really do love the pattern so much? In that case, we have a sneaking suspicion you might get along a touch better making something like this lovely patched together herringbone duvet featured in nice, simple detail on Our Thrifty Ideas.

Do you know another DIY or crafting enthusiast who adores herringbone patterned things just as much as we do, if not more? Share this post with them so they have all kinds of inspiration and ideas to try out! 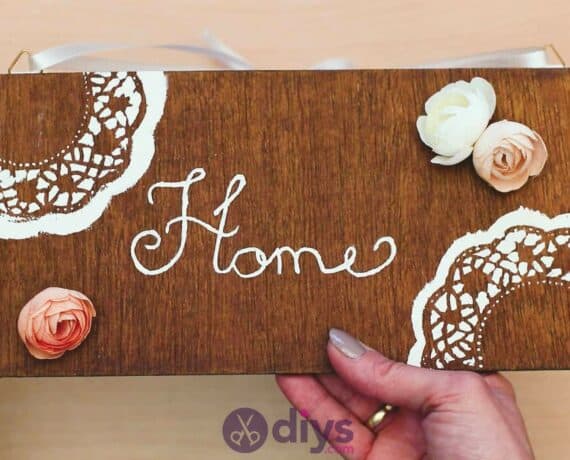 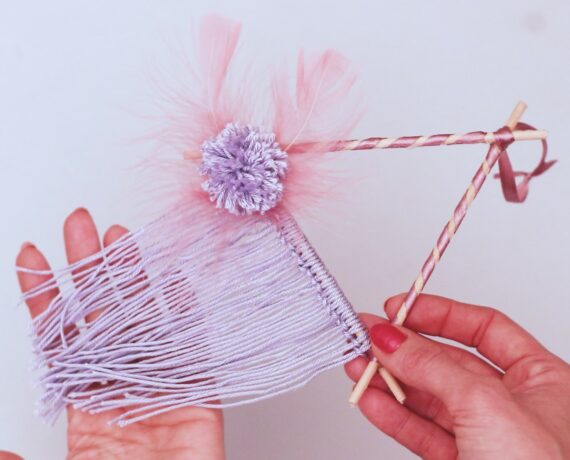 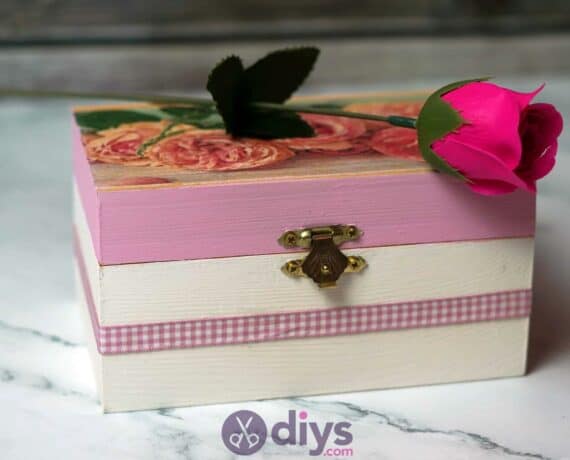