Hardy kiwi is the living proof that good things come in small packages. Unlike its cousin, the fuzzy kiwi, hardy kiwi has sweet fruits with edible skin and ornamental values to boot. In fact, most people grow it not because of its pint-sized fruits but for the stunning foliage and lush landscapes you can create with these vines. 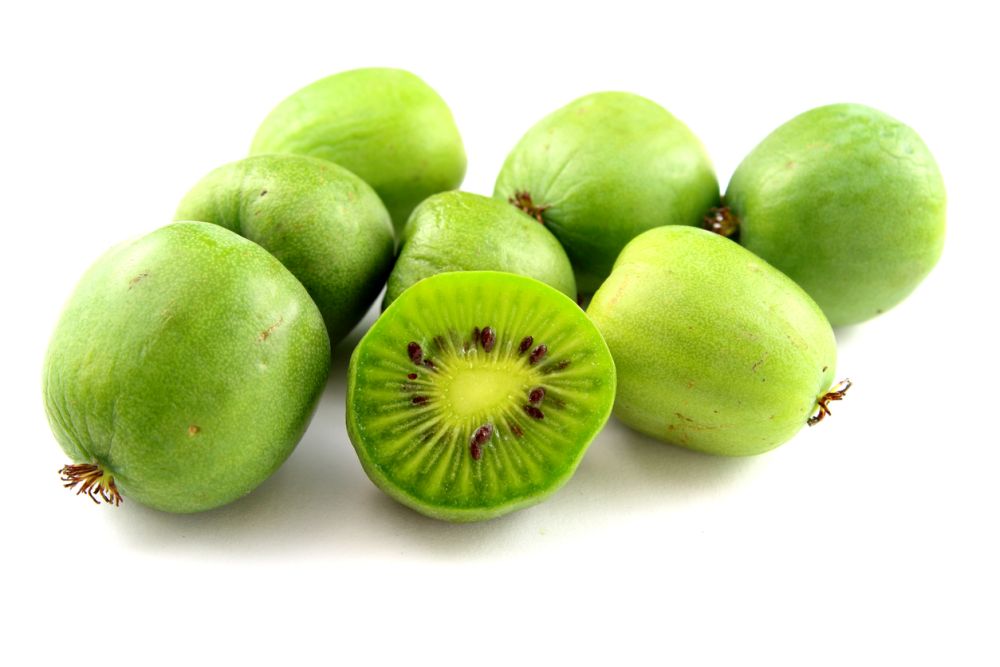 The ‘hardy’ in hardy kiwi vines refers to the plant’s extraordinary tolerance to cold temperatures. It grows and thrives in harsh winters when other lesser plants go dormant or succumb to frost and freezing temperatures.

Hardy Kiwi at a Glance

Hardy kiwi comes in two species, hardy kiwi vines (Actinidia arguta) and very hardy kiwi (Actinidia kolomikta). They both have the same small and highly nutritious fruits and heart-shaped leaves, but one has more cold tolerance than the other. Here we’ll cover both of them in terms of how to grow, care for, and harvest the delicious ripe fruits.

A native of China and East Asia, hardy kiwi, is a vine that grows to about 10 feet at maturity. But with enough space and in the right conditions, your vine could stretch out to cover about 30 feet. Just consider your landscaping possibilities when you have a fast-growing plant that covers such a large space with its lush foliage and delicate white flowers. It’s good as a hedge plant or to cover a fence. You can also grow it next to an empty wall or along the patio to create a vibrant design.

As a cold-tolerant vine, hardy kiwi grows well in zones 3 all the way to 9. It has unique heart-shaped leaves that start as pale green when small but then turn into deep, bright green. In the spring, the female vines will have small white flowers waiting to be pollinated from the male vines. Once pollinated, the small fruits will develop out of the fading flowers. The fruits become ripe in the fall, and you can eat them skin and all.

Depending on the zone and conditions you live in, you can choose between Actinidia arguta and Actinidia kolomikta. Many cultivars combine the best features of both of those distinct species. Some cultivars are even self-pollinating, which means you won’t have to grow a male vine next to the female ones to pollinate them. Here are some of the more popular hardy kiwi cultivars.

If you don’t care about the fruits much and your main focus is on the ornamental values of the vine, then you should grow male hardy kiwis. They have more lush foliage and denser leaves than female vines. That’s because they don’t waste resources on developing fruits.

How to Grow Hardy Kiwi

Since the fruits of the hardy kiwi already have seeds that are ready to grow, you won’t have trouble getting your hands on some fruits to start your own vines. However, since hardy kiwis are not available in every grocery store, you can order some seeds from a reputable source online. Then you can follow these simple steps to get started.

As is the case with vines with fast growth rates such as the hardy kiwi, pruning and training the branches will become part of your daily care. Once you’ve made sure that one of the vines in your garden is male, then you’re all set to have your first hardy kiwi harvest very shortly. If none of the vines you’ve planted is male, you can get a male sapling from the local nursery and plant near the female vines. It will catch up with the rest in a short while.

Hardy kiwi favors loamy soil over any other soil type. Clay soil doesn’t allow the root system of the vine to grow at the same rate as its foliage. This would stunt the growth of the plant and would impact its lush foliage and the annual yield. Check the soil before planting and make sure the pH levels are between neutral to slightly acidic. This translates in figures from 6.0 to 7.5. The soil should be well-drained since the vines are sensitive to wet soil. To test the texture and drainage of the soil, fill the palm of your hand with soil and clamp it shut to make a fist. Open your hand and see what happened to the soil. If it had turned into a clump, this is heavy soil that needs to be treated with perlite or coarse sand to improve its drainage.

As with many ornamental plants, your hardy kiwi vines need plenty of sunlight. This is especially true of the male vines that show off with their variegated foliage. Although they can tolerate some partial shade, the bright green leaves lose much of their luster in the shade than if they get full exposure to the sun. Make sure the spot is facing south or west and gets about 6 hours of sun per day.

For a plant that grows across such varied hardiness zones, the water needs of the hardy kiwi will vary depending on the weather in your specific zone. The young vines will need about 2 inches of water a week. That’s enough to keep the soil moist but not wet. As they grow and spread their branches and leaves across the structure you set up for them, they will need less and less water. If it gets dry and hot in the summer, then keep watering them, as usual, to keep the soil moist. If, on the other hand, you get plenty of rainfall (averaging 2 inches a week), then you don’t have to water them. In the fall and winter, cut back on watering even in hot zones.

A rich soil packed with organic materials provides a good start for the hardy kiwi vine. You’ll still need to apply a thin layer of compost every spring to improve the foliage and fruit yield of the vine. Use organic compost or other slow-release organic fertilizer for the best results. With a hoe or a spade, break the top three inches of the soil around the base of the vine, making sure not to get close to the roots. Sprinkle the compost or fertilizer and mix it well into the soil. Water the vines after the application. This should feed the hardy kiwi plants throughout the spring and summer.

Pruning vines can be tricky, especially in the first year of their life. You should prune your hardy kiwi in the winter when the plant is dormant. That encourages lush foliage growth and more fruits the next season. During the first year, choose a robust stem as the main branch and trim the other stems around it. Over the next few years, you can cut back as much as half the branches of the vine to trigger healthy growth.

Your hardy kiwi vines will become a target of the regular garden-variety pests such as thrips, Japanese beetles, and spider mites. Use your garden hose to dislocate these insects off the vines and collect them by hand to drown them in a bucket full of soapy water.

But sometimes, you might also get fungal infestations that affect both the roots and leaves. Root rot is a common problem due to poorly drained or waterlogged soil. Nematodes are another problem as they seem to have a particular affinity for hard kiwi vines. Use neem oil or a swap soaked in rubbing alcohol to get rid of these pests.

Most hardy kiwi cultivars take about 150 days for the fruits to become fully ripe. Although it can be somewhat difficult to tell since the small fruit with its green skin and flesh looks exactly the same, both ripe and unripe. However, you can pinch the kiwi fruit lightly with your thumb and forefinger. If it yields under the pressure, then it’s ready to harvest. The fruits continue to ripen after harvesting. So spread them on a dry sheet and keep them in a warm place to ripen.