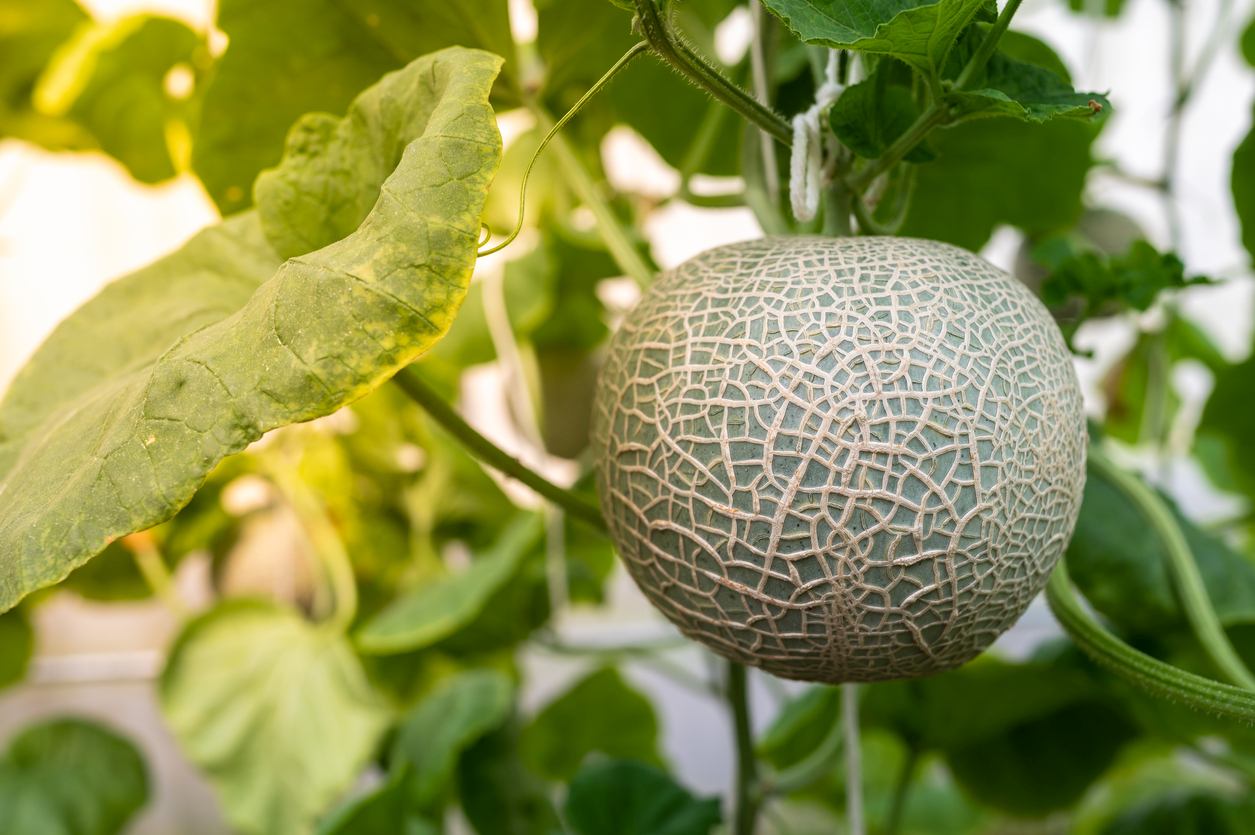 Juicy, lavish, and sweet, the cantaloupe is a refreshing and nourishing summer delicacy. Some people prefer the crunchy watermelon, but the cantaloupe always wins with its smoother flesh and delicate flavors. In a smoothie, fruit salad, or as juice, you can never go wrong with this summer fruit. But did you know that the tastiest cantaloupe is the one you grow right out of your garden? At least that’s what most gardeners claim and they’re rarely wrong. 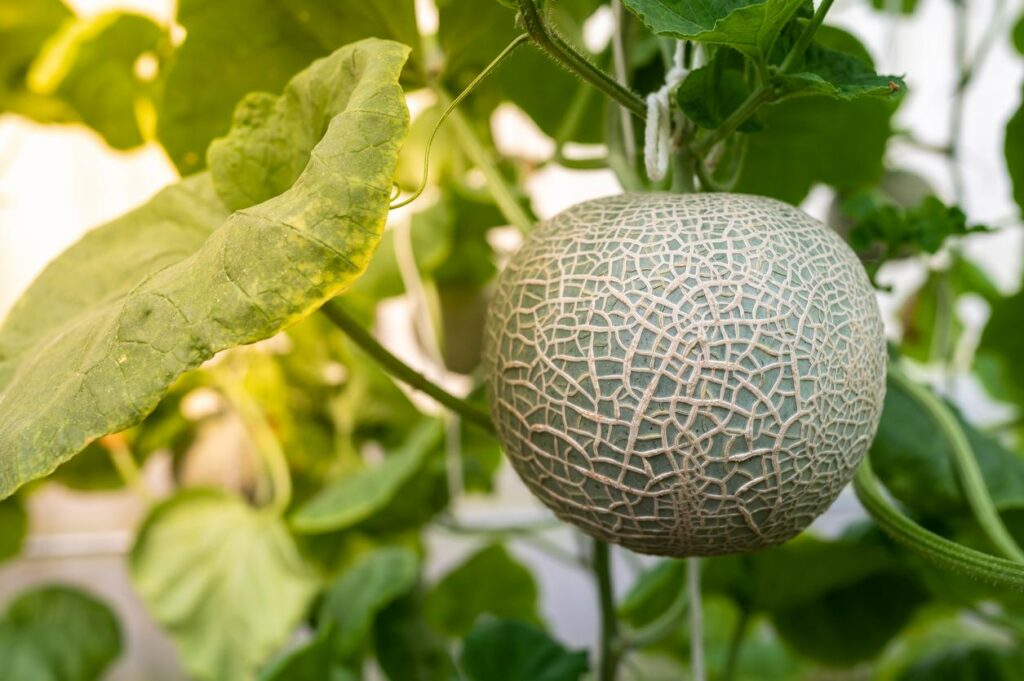 But which cantaloupe variety to grow? And why not try muskmelon? So many questions to ask yourself before you have even broken the topsoil. Let’s delve into the wonderful and flavorful world of cantaloupes and while we’re there, answer these questions.

Cantaloupe at a Glance

While the name of the cantaloupe (Cucumis melo var. cantalupensis) can be traced back to a small town in Italy called Cantalupo, that’s not the original place of this fruit. It is believed that cantaloupes were first grown in Africa or South Asia before they found their way on merchant ships to Italy. From there, the juicy fruit became a sensation all over Europe before it arrived in the New World in the late 19th century.

The vine of the cantaloupe is distinguished with large dark green leaves and hairy stems. You really need to be careful when handling the mature plant because of all of those tiny spikes. The flowers of the cantaloupe are classified as male and female. Each plant grows both types and they have to be pollinated for the vine to produce fruits. The female flower is often larger with a round swelling at the base where the cantaloupe fruit will develop after pollination.

The fruit itself comes in various shapes and textures. It can be perfectly round or oval. The skin is often patterned and a little rough. It gets rougher as the fruit becomes ripe. You should always let the cantaloupe ripen on the vine before you cut it.

As you might expect, agriculturalists were not happy with the cantaloupe that grew in Italy, and soon many cultivars spread out. But we can trace all these cultivars to 6 cantaloupe types.

How to Grow Cantaloupe

Say what you like about cantaloupes and their origins, there’s no doubt that every gardener is tempted to grow them. It’s not just the delicious fruits, cantaloupes are usually easy to grow. If this is your first ever fruit patch, you’re in luck. Here’s how to grow cantaloupes in easy steps.

Did we say that planting cantaloupes was easy? Well, in a way it’s straightforward if a little protracted. But when the little vines are crawling all over the mounds looking healthy and green, it’s time to turn to the second part of the process. Here you’ll need to focus not just on water and fertilizing, but also training the vines and pollination.

While cantaloupes prefer loamy or sandy soil, you also need to plant them in raised mounds or hills to improve drainage. The soil should be neutral. Neither acidic nor alkaline soil will do with this vine. So test your soil before planting and make sure the pH levels are between 6 and 6.5. Too much iron makes the soil alkaline which in turn impacts the growth of the vines. Acidic soil gives you less produce than average.

Undoubtedly, watering is often one of the trickiest parts of growing plants in your garden. As with many juicy fruits and veggies, cantaloupes need lots of water. You should always water the base of the plant to reach the roots faster. Avoid sprinkling water over the leaves or vines since that causes fungal infestations. On average you should give your vines about 2 inches of water a week. If the weather is hot, you might need to increase your watering. Always irrigate the vines in the early morning to give the soil time to absorb the moisture and pass it to the roots. Keep the soil moist but not soaked.

When it comes to veggies and fruits, you always have a choice between organic materials and chemical fertilizers. Experts recommend that you use as much organic compost and manure as you can to avoid the need for chemical fertilizers. Cantaloupes prefer steer and horse composted manure. They have the right amount of the nutritions the vines need and the slow-release process keeps the plants feeding for weeks at a time without the risk of burning the roots. Chemical fertilizers tend to produce less sweet fruits and the flavors are usually under dispute.

Cantaloupes love the full sun. Avoid partial shade and dappled light since the vines need all the warmth they can get. On average they thrive in temperatures between 70 and 90 degrees Fahrenheit. If it drops below 50 degrees F, the vines become shriveled and stop flowering. Any temperature above 90 degrees F puts stress on the vines. The flowers start to droop and the stems become wilted. In that case, a little shade might come in handy and help the plants survive the heat.

Each cantaloupe vine carries both male and female flowers. The female flowers usually have a bulge near the base while the male flowers are thinner and smaller. The female flower has to be pollinated for the unfertilized fruit at its base to develop. You won’t have to do that yourself since bees take that task with enthusiasm. Make sure to grow other flowering plants to draw bees to your garden to pollinate your cantaloupe flowers.

The two most bothersome pests that will keep you vigilant around your cantaloupes are aphids and striped cucumber beetles. Aphids are not strangers to any garden no matter what you grow in it. But it’s the striped cucumber beetles that inflict the heaviest damage on the fruits. While you can hose away aphids, you have to manually pick the beetles and destroy them without delay before they infect the vines with the bacteria they carry.

Many diseases afflict the vines including Alternaria leaf spot, powdery and downy mildew, and stem blight. You should also be wary of root rot which results from overwatering the soil. You should remove the infected vines and destroy them safely before they spread the disease to other plants. Keep your garden and mounds debris-free and remove weeds regularly to discourage insects and pests.

You’ll know that your cantaloupe is ripe when the color of the rind turns from dark green to yellow or tan depending on the variety you grow. Another good sign that the fruit is ready to harvest is when it has reached its full size and it comes off when you move it. Don’t try to yank the fruit from the vine. That means it’s still not ripe. Cantaloupes always ripen on the vine so if you harvest a green fruit you won’t be able to eat it. Overripe cantaloupes become yellow and lose much of the sweetness and flavors.

8 Cantaloupe Varieties That You Can Grow At Home