Have you ever craved something in such a huge way that when you finally get a bite of it, you can’t imagine that it could possibly taste any better than it does in that moment? Well, we always feel that way with ice cream each and every time we have it. Recently, however, we had a uniquely gourmet flavoured ice cream float and it was unlike any other float or ice cream based treat we’d ever tasted! That’s how we started searching the far reaches of the Internet for every creatively flavoured ice cream float recipe we could possibly find. Turns out, no matter how much we love a good bite of simple ice cream, it can nearly always taste even better combined with other delicious things.

Just in case you love decadent ice cream floats as much as we do, if not more, check out these fantastic recipes that will let you create all kinds of mouth watering flavour combinations with your ice cream! 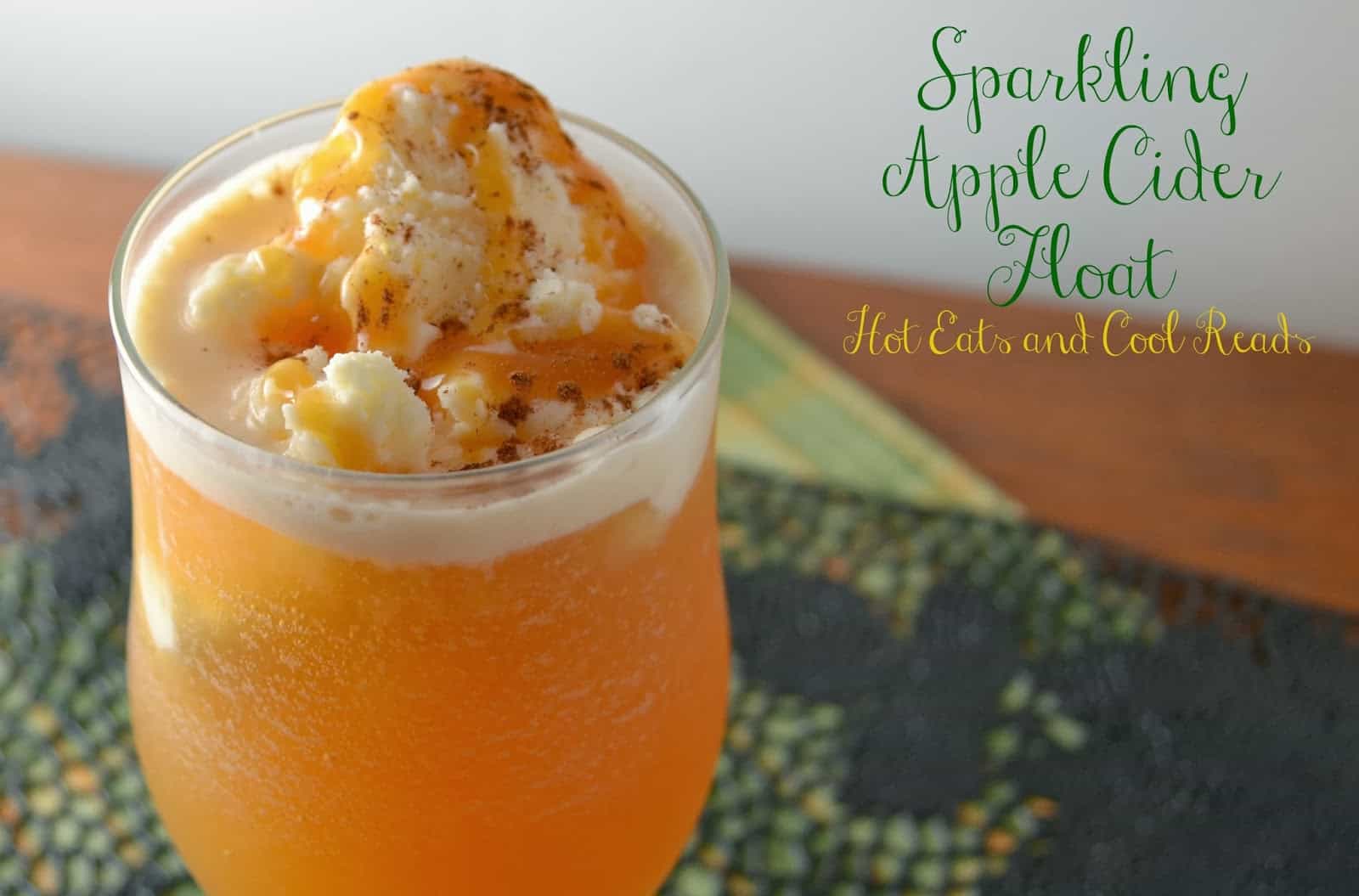 Even though we’re new to creative flavoured floats, we’ve had lots of different kinds that are made with pop. We didn’t realize until we found this recipe from Hot Eats and Cool Reads, however, that floats can be made by combining ice cream with other kinds of fizzing drinks! We love the fresh, nearly festive taste of this sparkling apple cider float and we can’t get over how delicious the caramel drizzle on top looks! 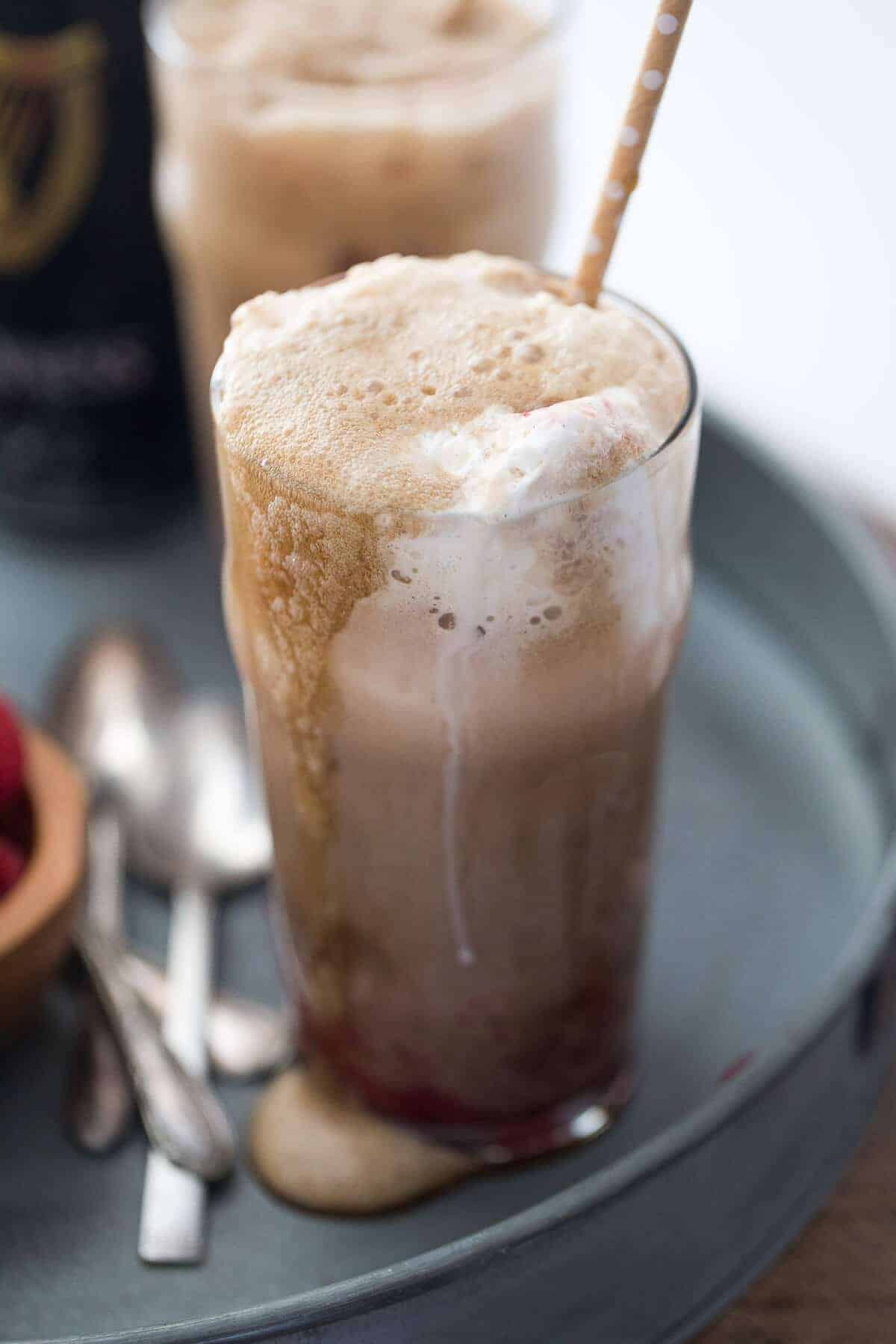 Besides a heaping spoonful of ice cream, of course, is there nothing you love more than a cold beer at the end of a long work day? Well, no matter how much we love the regular flavour of something, we’re also still always open to the idea of putting new twists on things! If you like that too, we have a feeling you’re going to be very intrigued by this Guinness stout ice cream float from Lemons for Lulu! 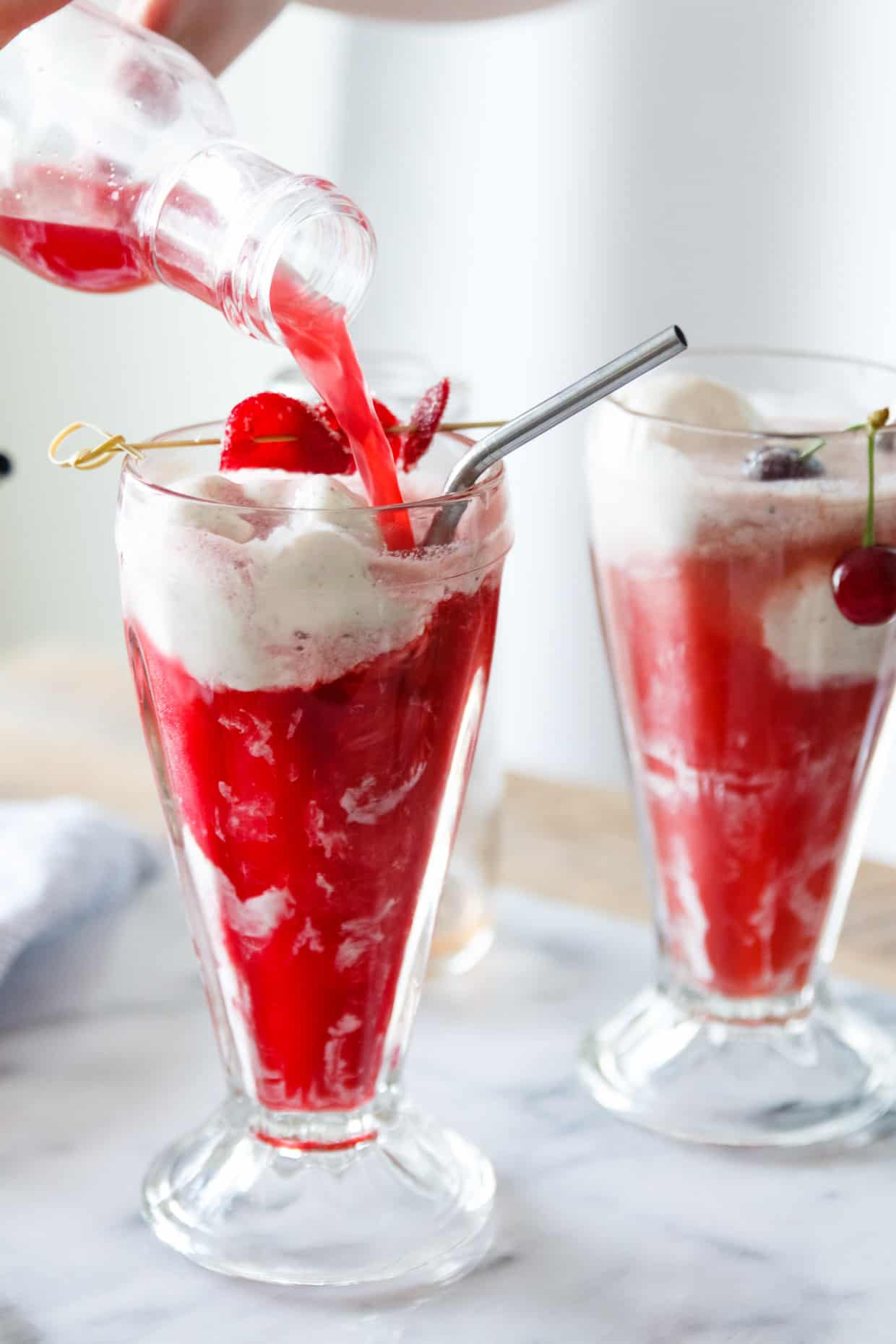 If you’re going to combine your ice cream with some other awesome flavours to make a unique float, would you prefer to lean towards natural and floral flavours? Well, we can’t say we blame you! Besides the fact that they’re trending, floral flavours are so good that we’ve been essentially obsessed with them lately. This hibiscus ginger ice cream float is actually on the top of our list to try next. Get the full ingredients on Snixy Kitchen! 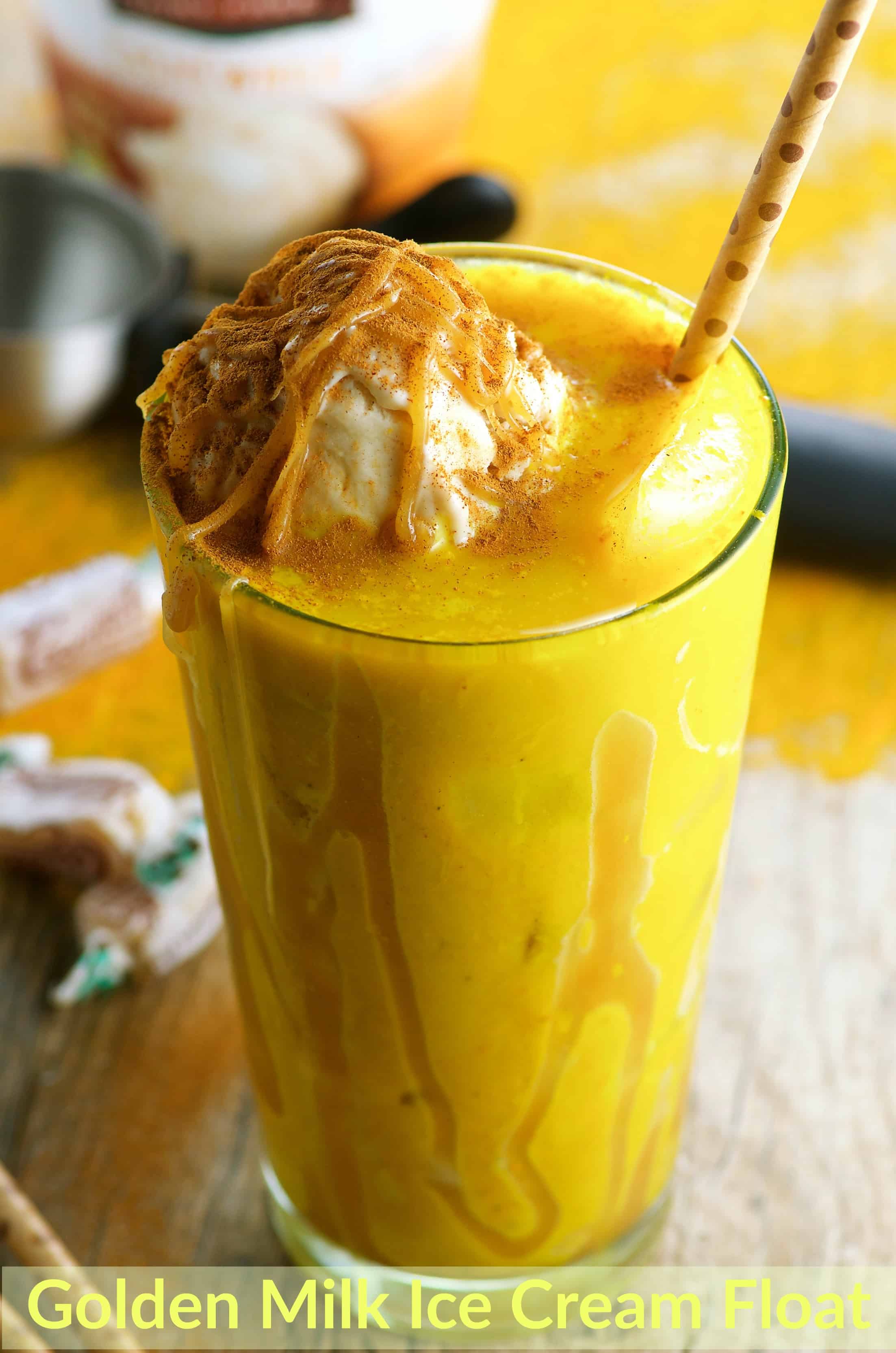 Are you so into the idea of making delicious ice cream floats that you’d like to have all your friends over so you can make them together, but you want to make sure that everyone is included, no matter their dietary restrictions? Then it’s probably a good idea to have a vegan float recipe on your list! This “golden milk” ice cream float is made with sweetened coconut almond milk, maple syrup, turmeric, cinnamon, fresh grated ginger, black pepper, and non-dairy dry vanilla ice cream. Cashew ice cream works well! Find more details on May I Have That Recipe. 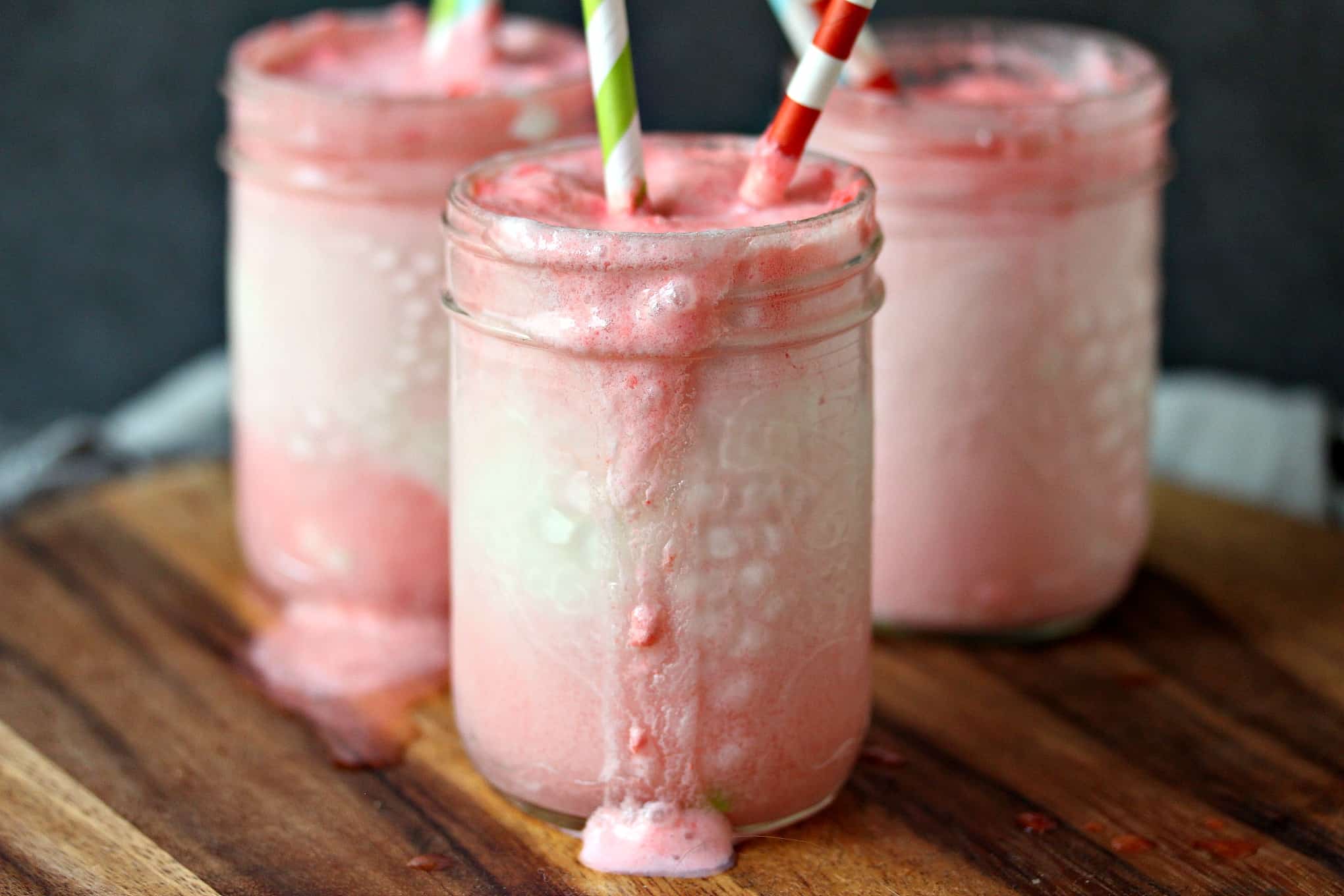 Are you actually thinking of making fun ice cream floats with your kids but you know they’d rather have a slightly more classic flavour, even though you still want to put a cool twist on things? In that case, this cherry limeade recipe is an awesome option for you! Cravings of A Lunatic shows you how to make an ice cream float with cherry pop and a hint of citrus-y lime flavour to top it off. 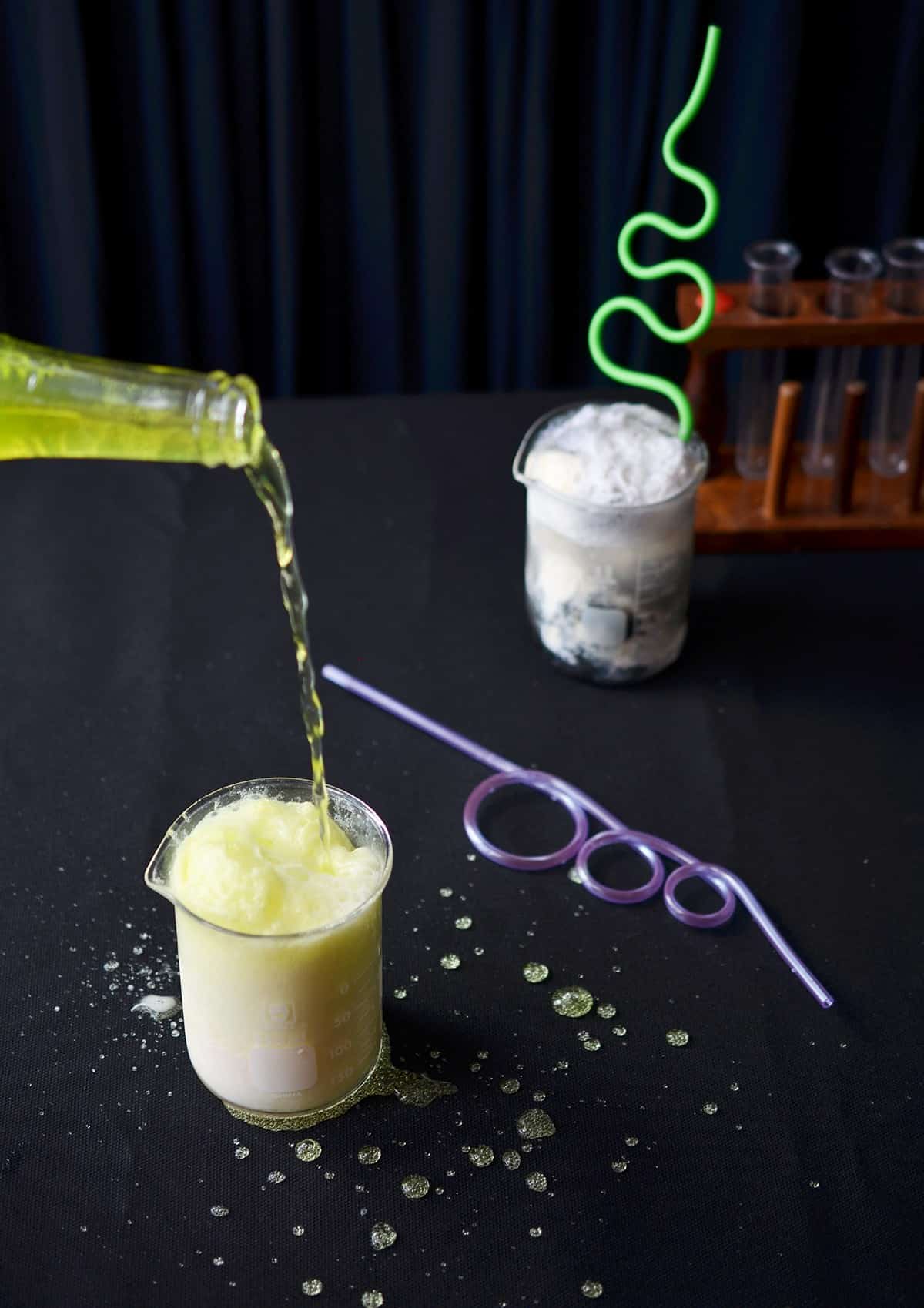 In your opinion, is the half the fun of having ice cream sodas actually in the process of making them? Well, we’d certainly agree with you and we think our kids would too! That’s why we thought this ice cream float party idea from Land of Nod was so neat! They suggest making your floats inside science beakers and using brightly coloured pop like grape and orange so that the drinks look like cool concoctions! Just make sure to use brand new beakers that you can guarantee are cleaned and haven’t actually been used in a lab before. 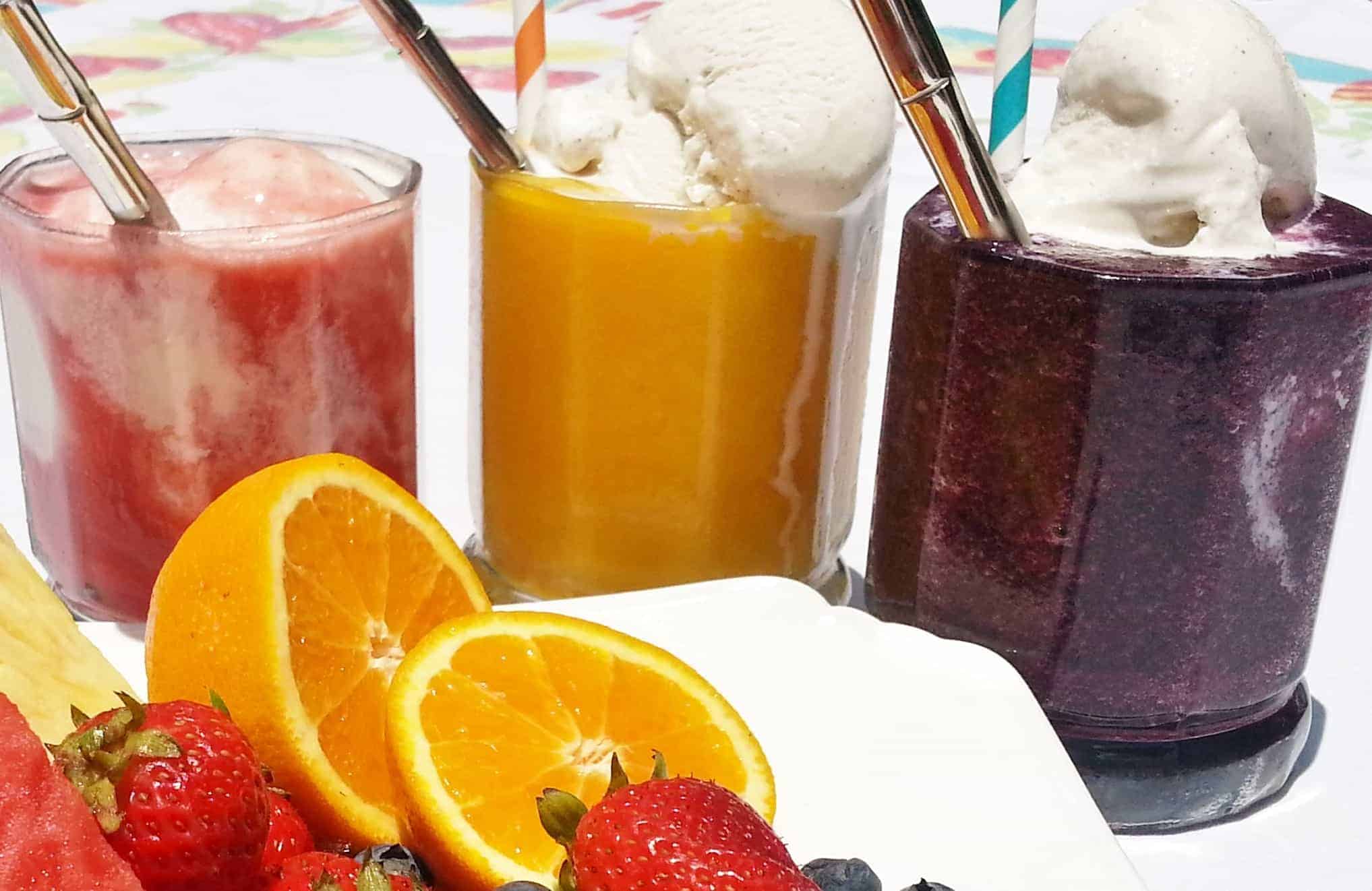 Okay, we know this particular idea isn’t quite the kind of float you were expecting because it’s actually closer to combining ice cream with a smoothie, but once you’ve tasted how refreshing they are, we have a feeling you’re not going to have a problem with that! Back to The Book Nutrition shows you how to create a deliciously flavourful drink made with real blended fruits of all different kinds. 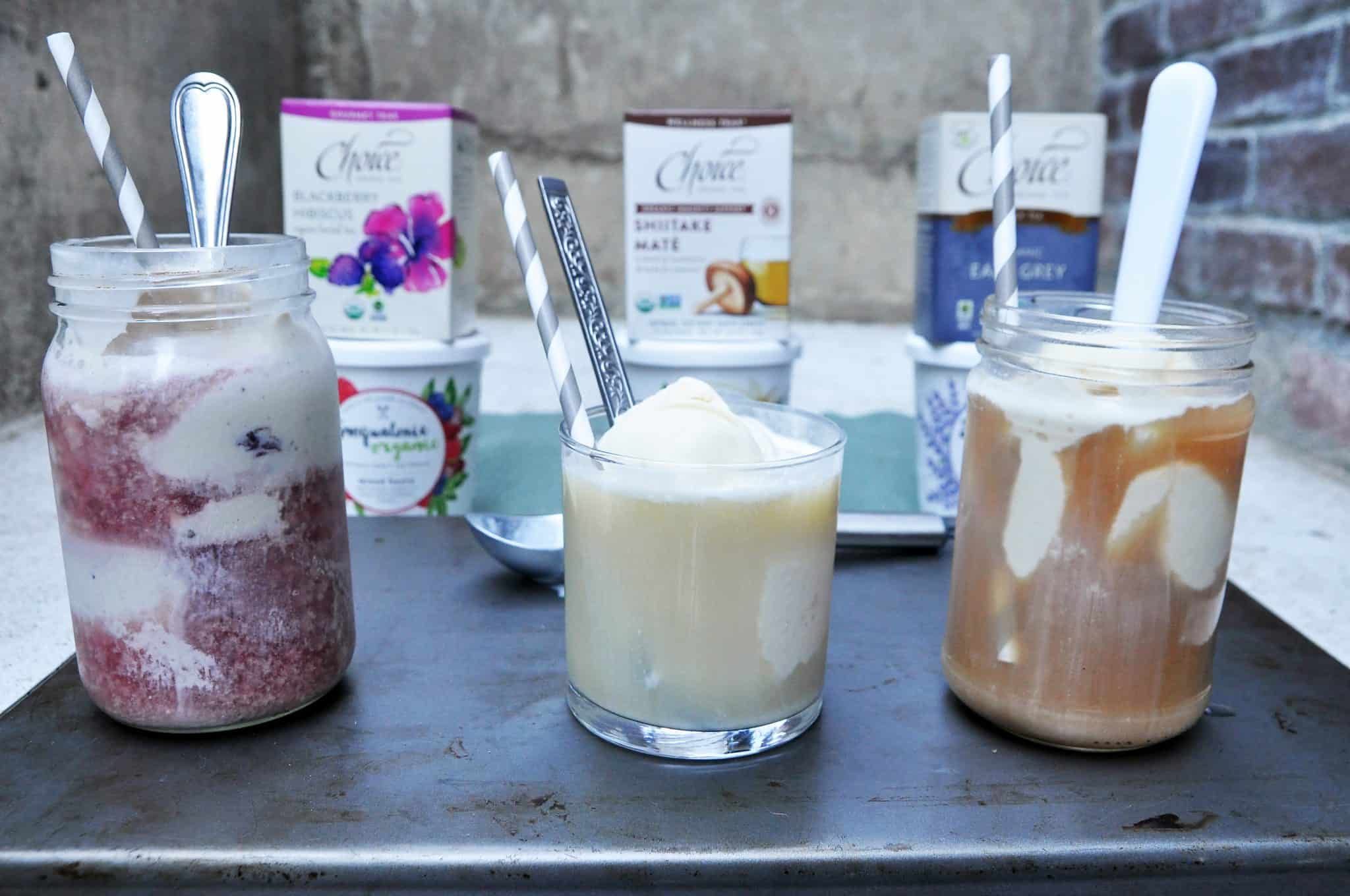 Given a choice, is your go-to drink actually usually a warm one rather than a bubbly, chilled pop? In that case, we have a feeling you’ll get a kick out of these uniquely flavoured tea lattes from Choice Organic Teas! They show you how to get just the right temperature so that your beverage isn’t super cold like a regular ice cream float but also isn’t hot enough to completely melt your ice cream in seconds the way a regular cup of tea would. 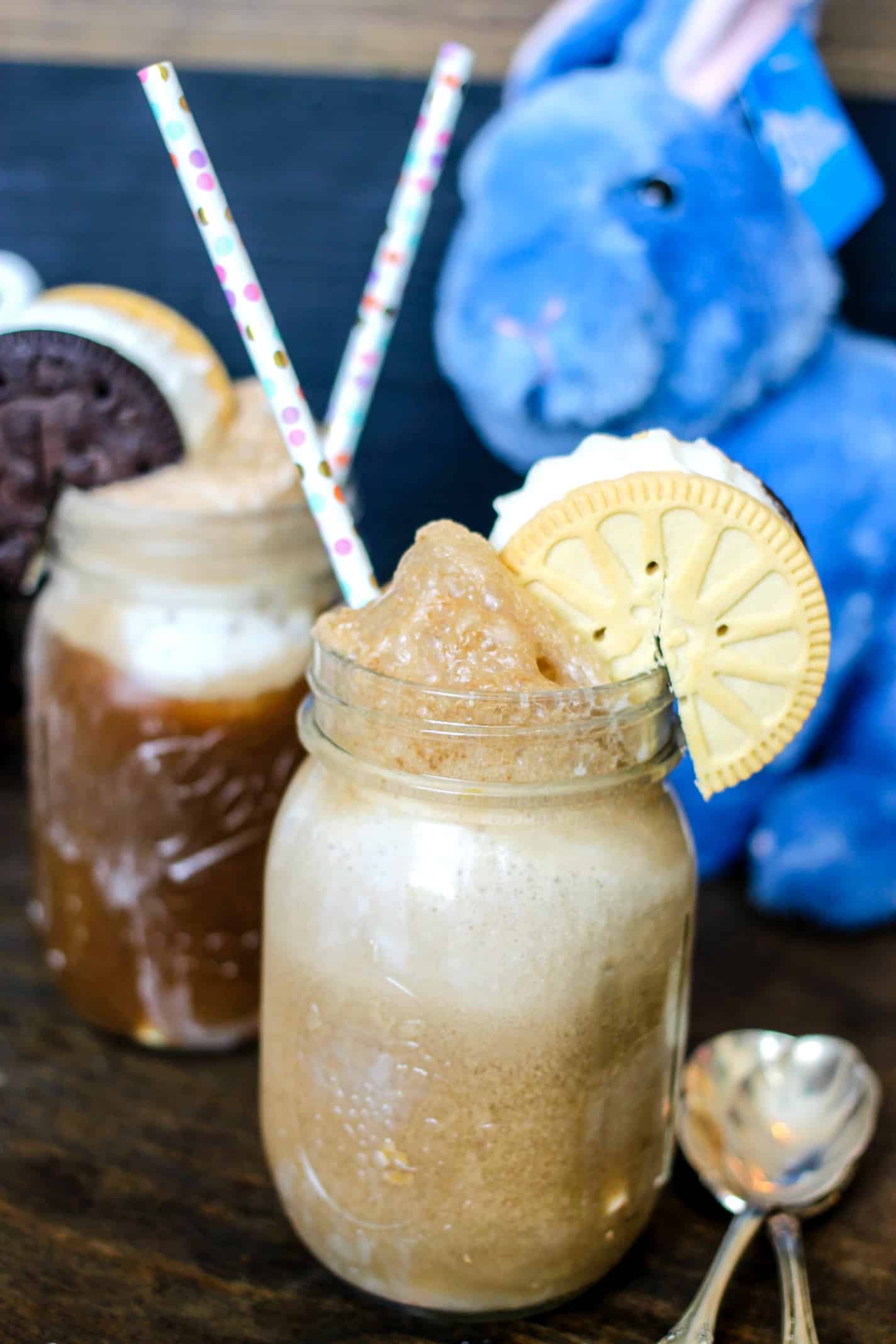 We know we’ve been talking a lot about ice cream floats on this list, since it is a list of delicious float recipes and all, but they’re actually not the only kind of ice cream treat we really love! We’ve actually always been really big fans of ice cream sandwiches too. Imagine how excited we were, then, when we found this recipe from Domestic Super Hero that perfectly combines the two for a deliciously creamy treat! 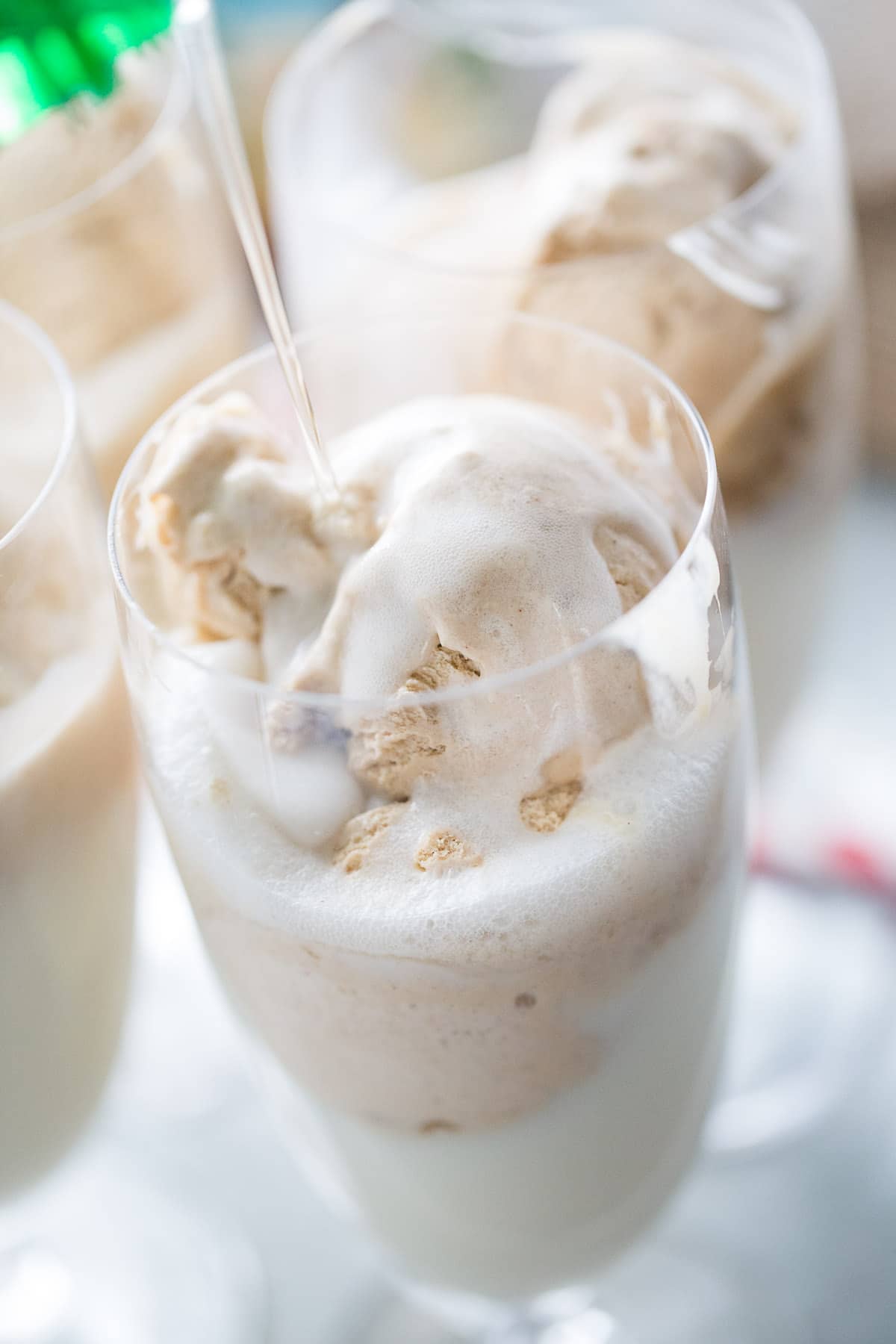 We know the holidays are over now but that doesn’t mean we’re quite ready to give up all of our delicious holiday flavours and treats just yet! This extra creamy version of egg nog from Lemons for Lulu that combines the flavour you love with the joys of an ice cream float is the perfect way to keep holiday flavours alive for a bit. Even if you don’t feel like you need egg nog right now, it’s a great thing to keep in your arsenal of egg nog flavoured things until next year! 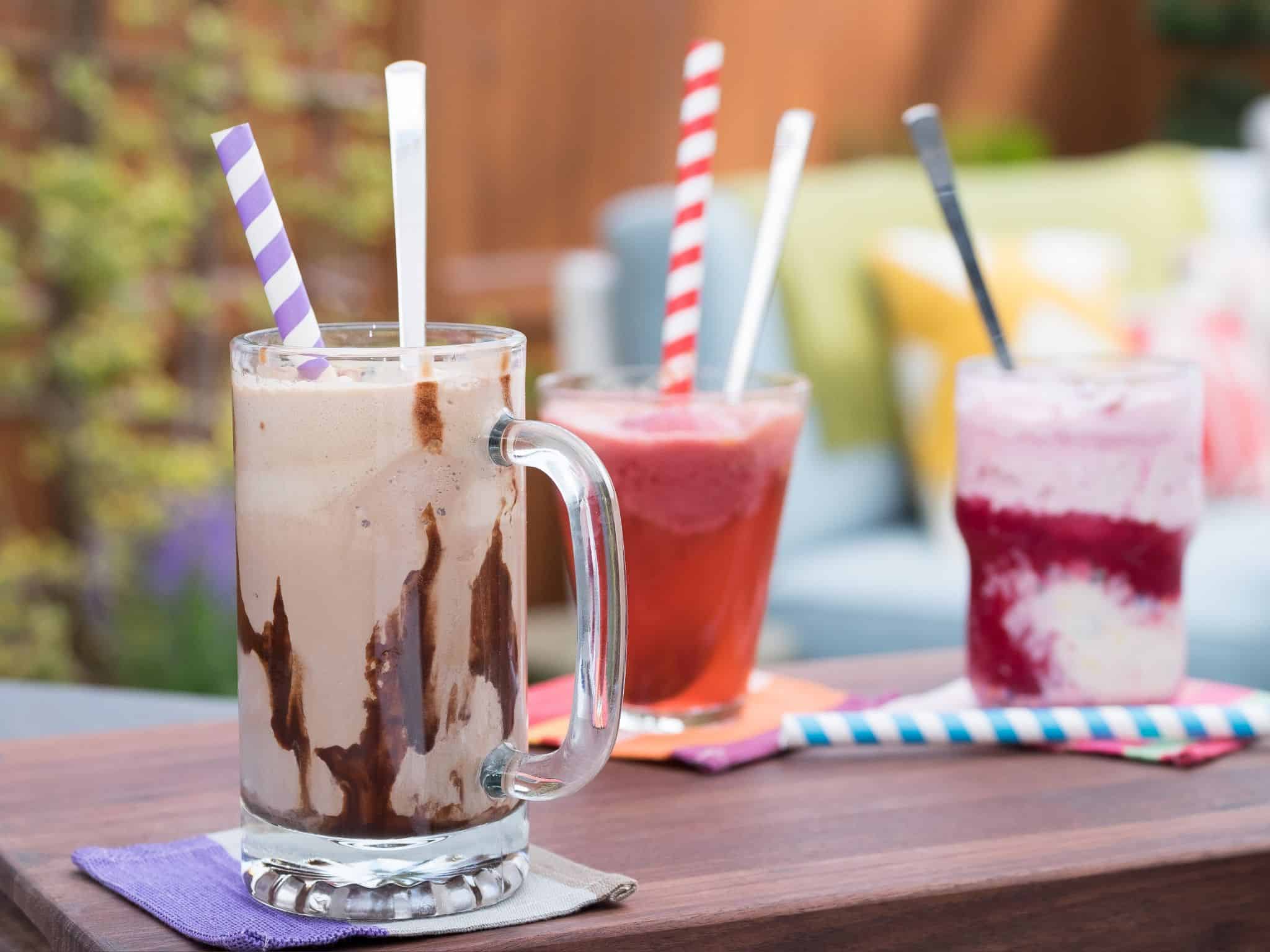 Were you quite a big fan of the idea of making an alcoholic version of an ice cream float because you think they’re a neat idea to serve at parties with your friends, but you’re not sure the beer option we showed you earlier is quite what you had in mind? The perhaps something with whiskey would be a little more up your alley! We love the way Food Network made a deliciously blended mixed ice cream drink that even involves chocolate, just for a little extra kick. 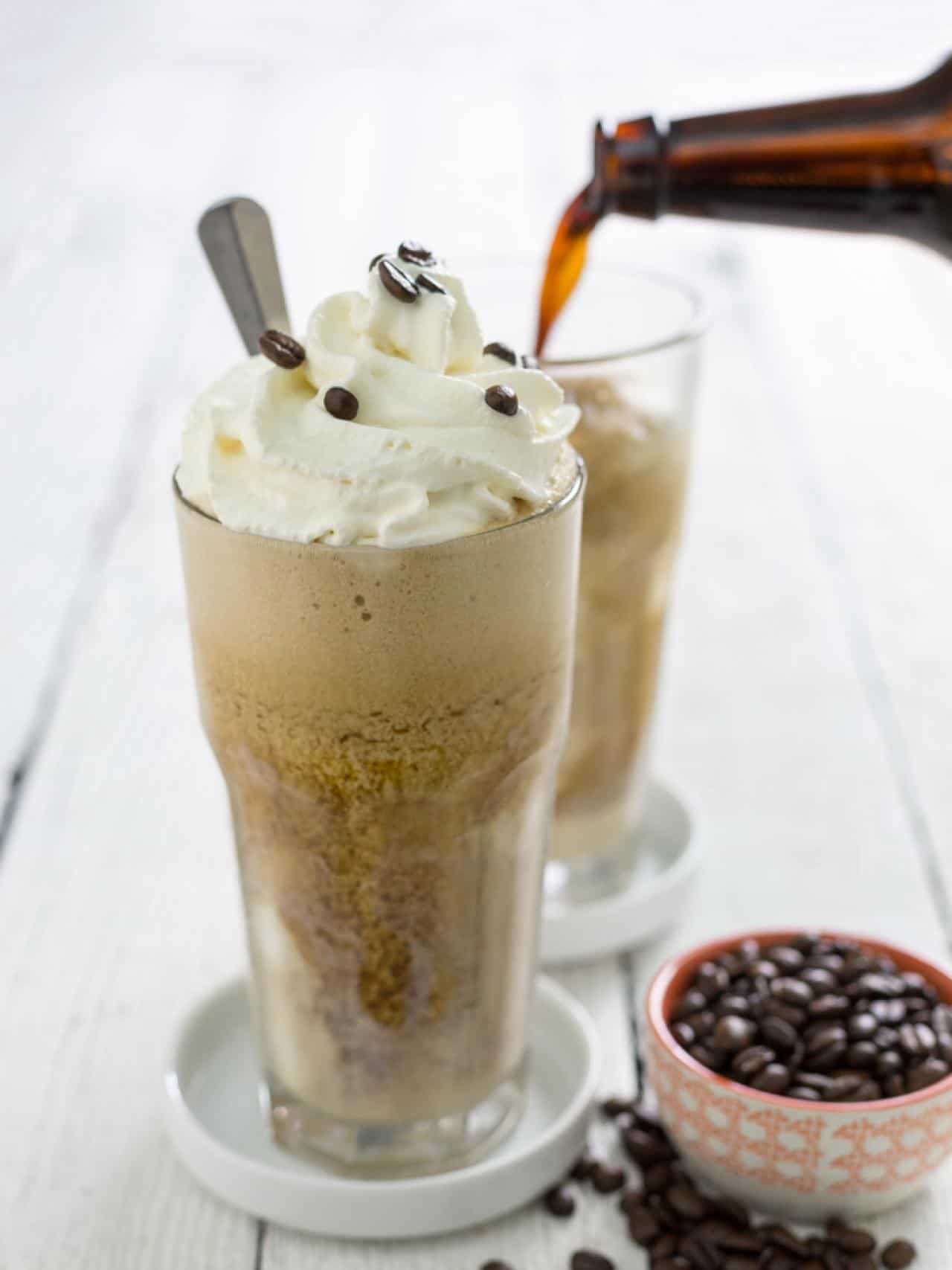 Have you been scrolling through our list feeling like you can’t possbily choose between all of these different ideas and flavours? Well, the good news is that no one said you had to choose! Why not combine a few of them? We love the way HGTV did just that by making this “black and white” float. Their tutorial shows you how it’s done using coffee gelato, coffee liqueur, vodka, coffee stout beer, whipped cream, and even some coffee beans for garnish. 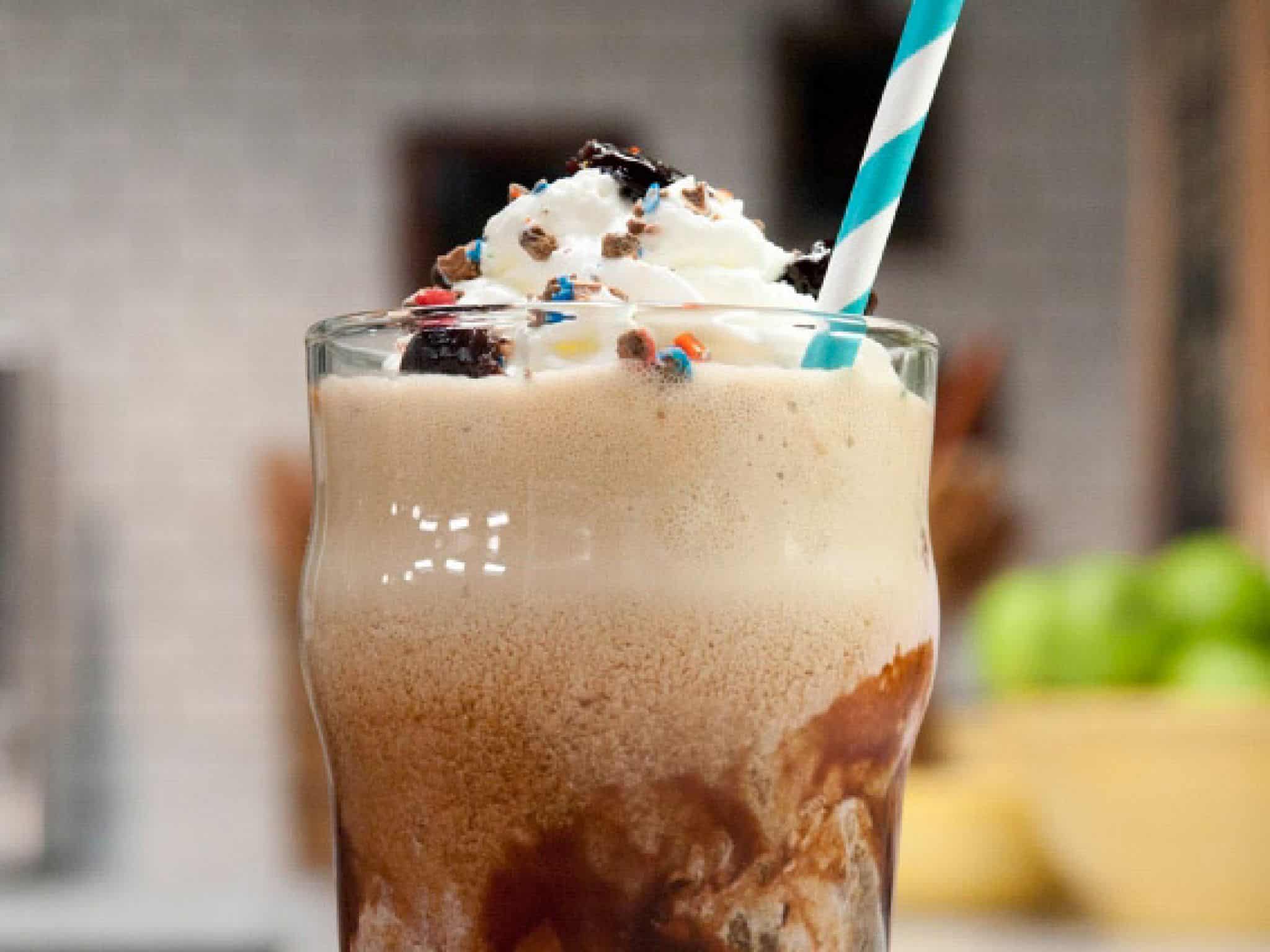 We’ve shown you a couple recipes at this point that combine several ingredients from the others on the list, but so far we haven’t given you one that includes fruit in the unique combination of alcohol, coffee, chocolate, and ice cream. That’s why we’re so happy to show you this coco-cherry stout ice cream float recipe from Food Network! The cherry flavour adds a little extra something to the layers of sweetness and cream. 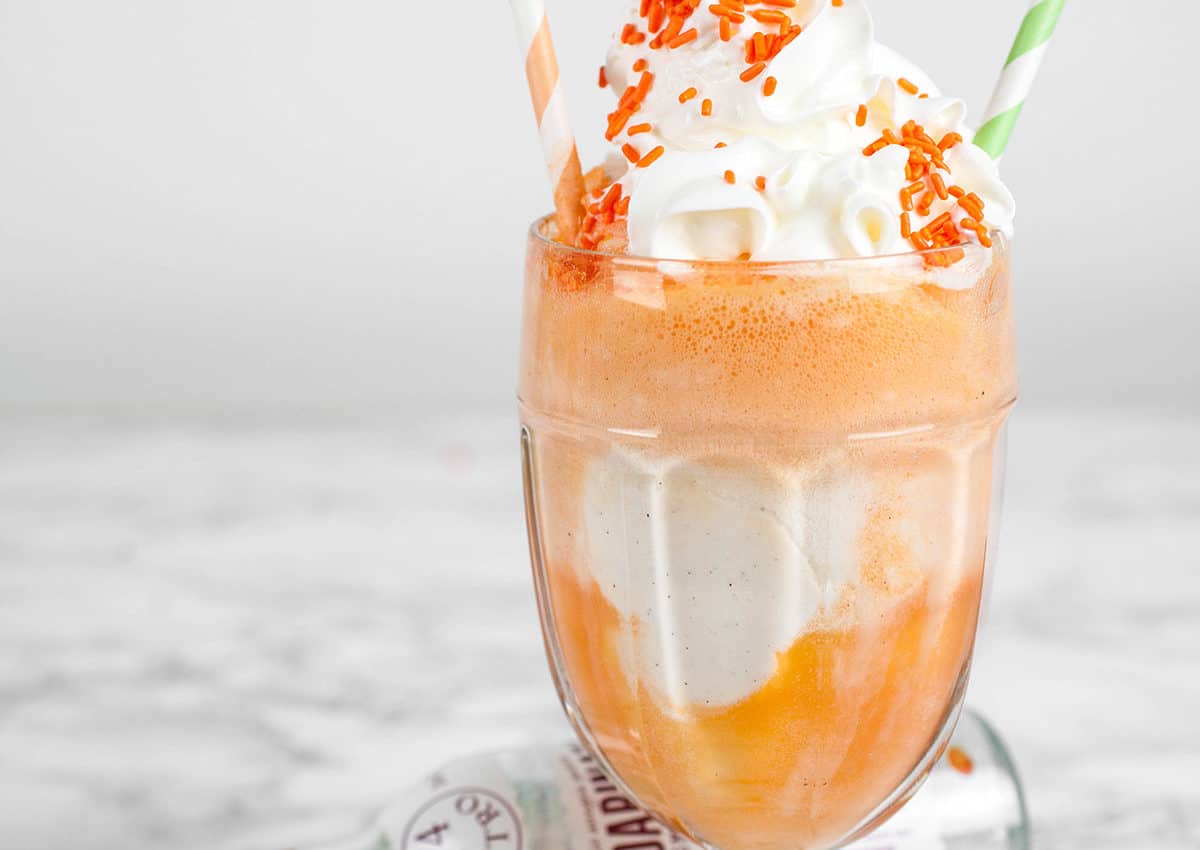 So far we’ve shown you all kinds of fruit flavours in the float department, and we’ve even mentioned a few times that some of the previous recipes can be made with orange pop instead, but we haven’t actually given you a float recipe that specifically celebrates delicious orange flavours the way this one from Colavita Recipes does! Their “mandarinata” combines orange and ice cream until you’ve got a sparkling beverage that tastes just like a creamsicle. 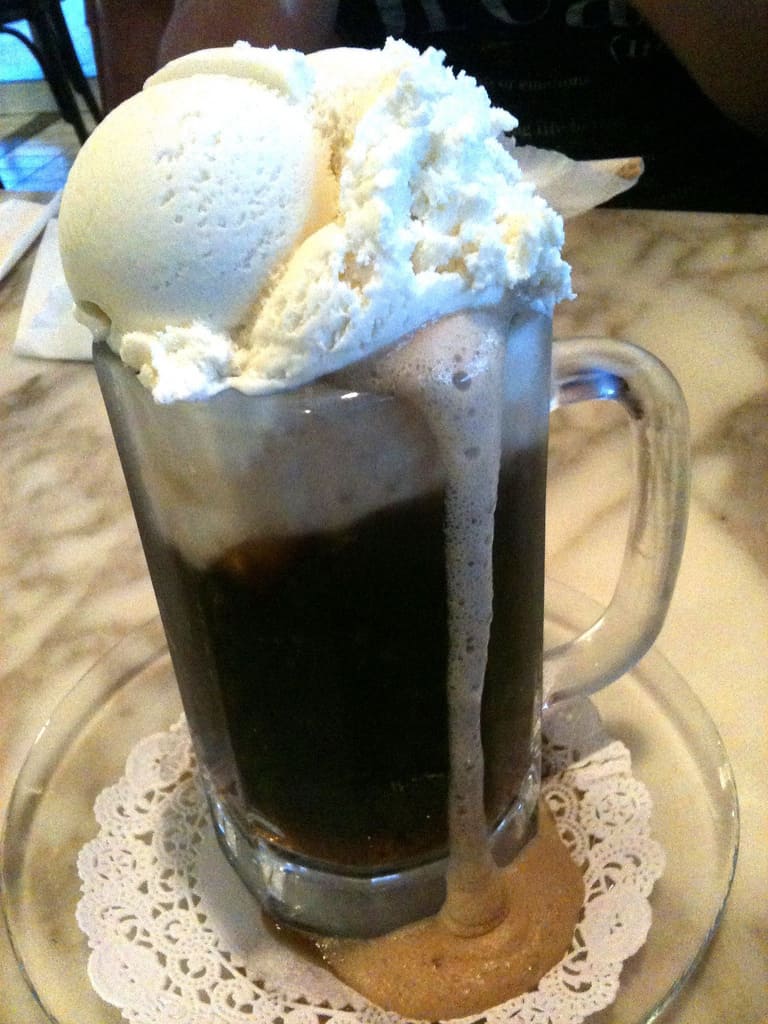 In all our years of loving floats, we were so distracted by combining our ice cream with the fruity flavours of pop that it never really occurred to us to try out how the most obvious sparkling beverage out there would taste with our ice cream. That is, we’d never thought of making a cola float until we saw this recipe from Foodness Gracious! Whether you use Coke, Pepsi, RC Cola, or another cola brand of your choice, the results will be surprisingly satisfying.

Do you know someone who loves ice cream and ice cream floats just as much as we do and is always on the lookout for new and unique flavours and recipes to try? Share this post with them so they can find some new ways to enjoy their favourite thing! 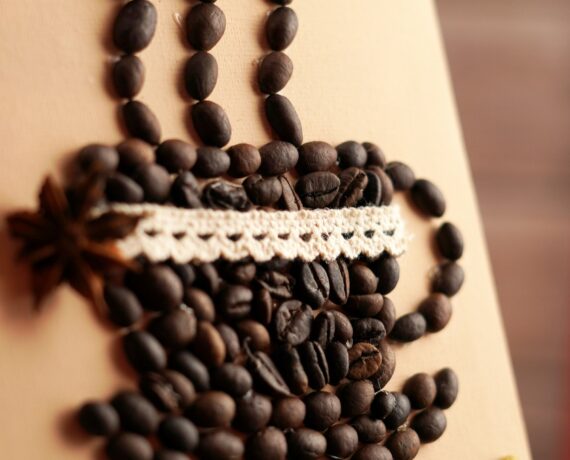 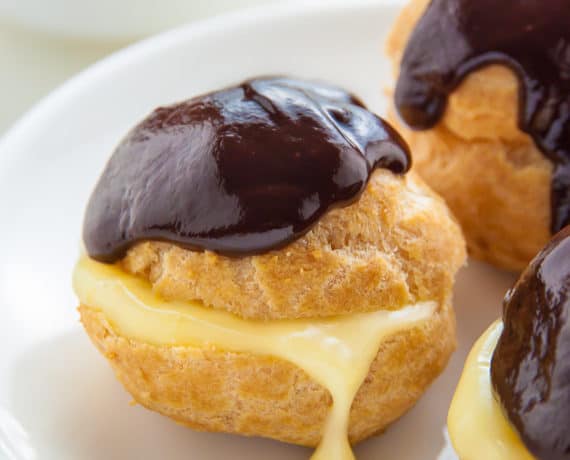 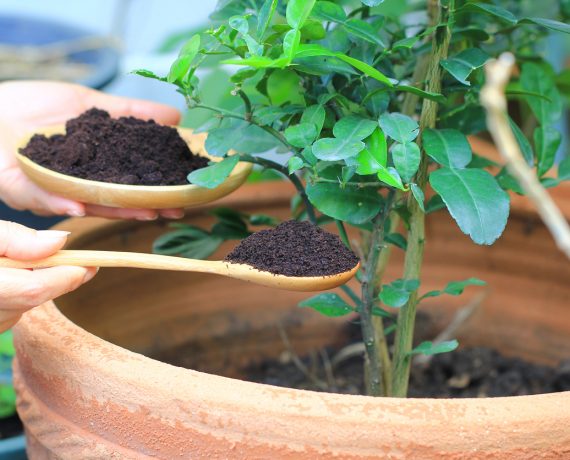 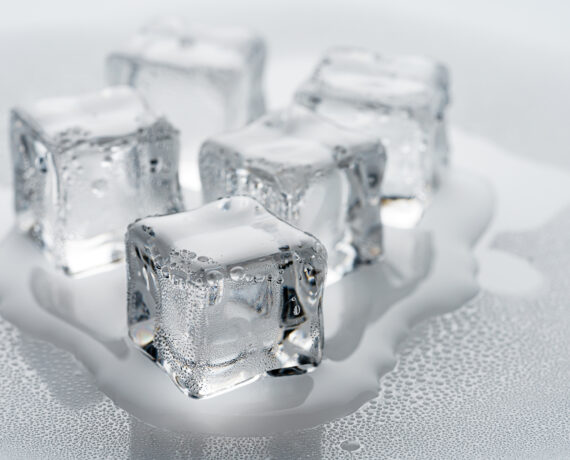