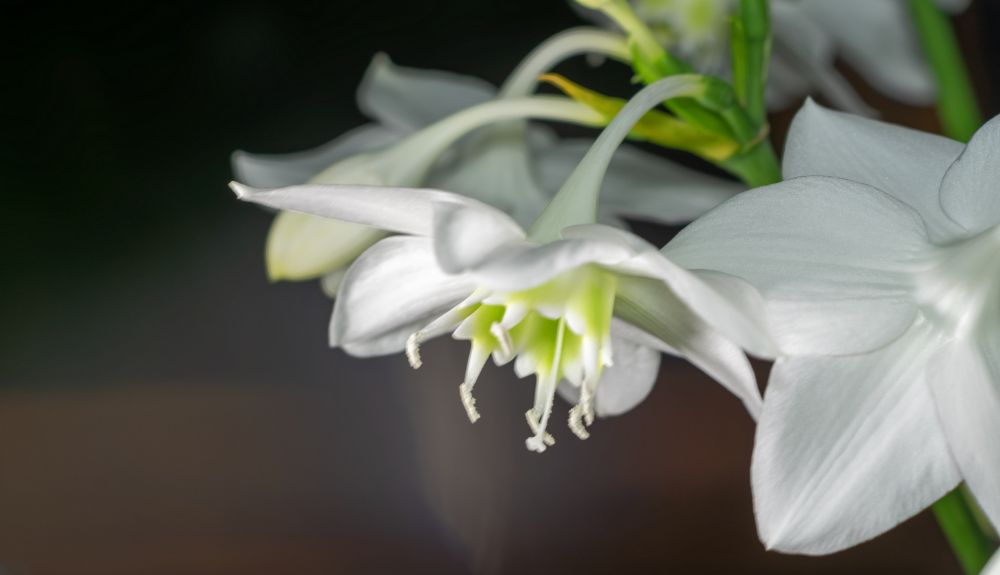 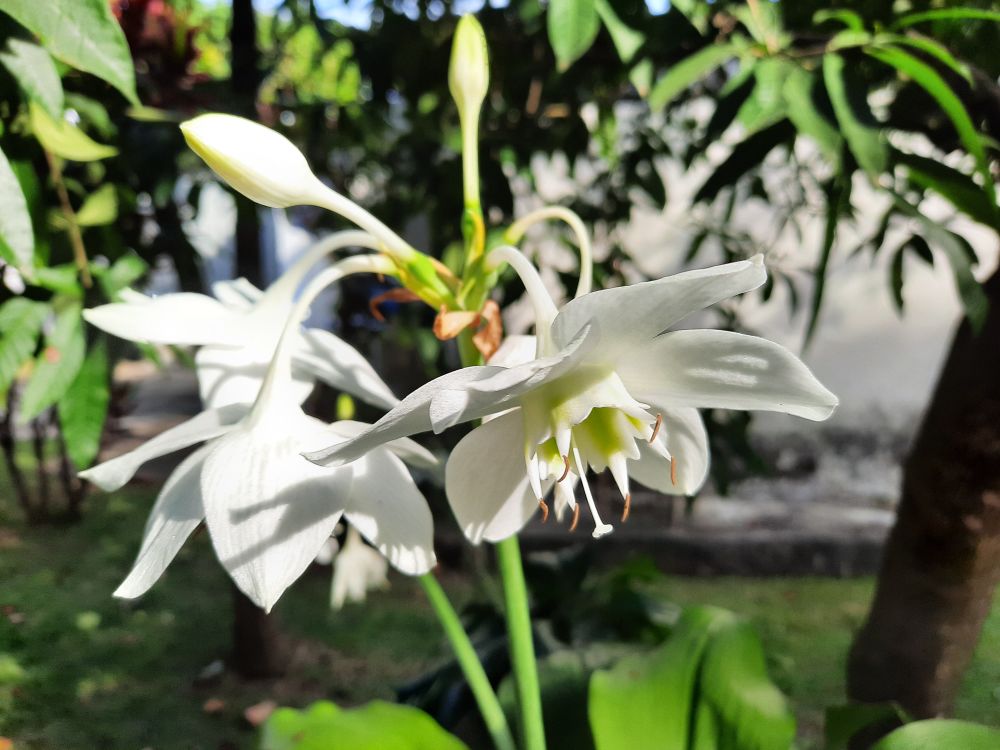 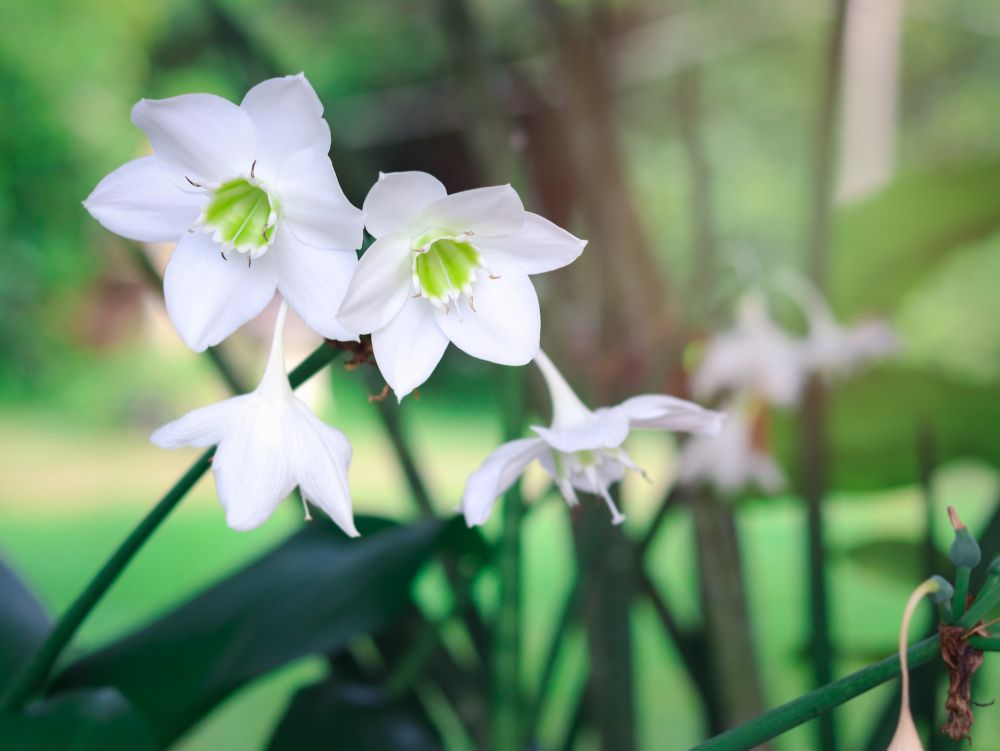 The Amazon lily flower is a tropical plant best known for its clusters of white flowers and large dark green leaves. Although coaxing the bulb to flower can be tricky, the green foliage alone has enough ornamental appeal to make it ideal for every garden. 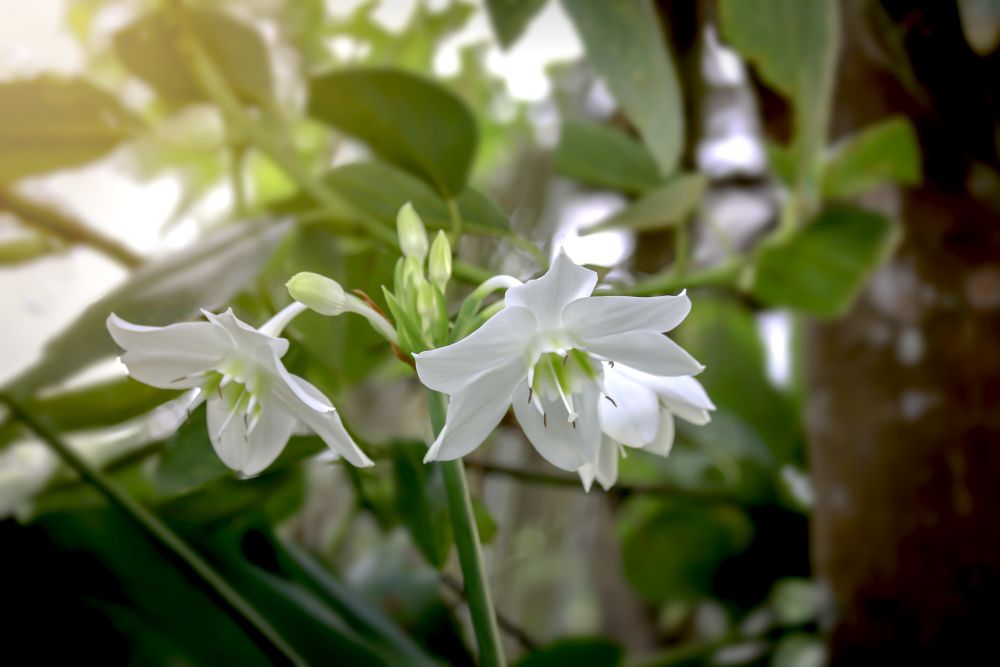 Another caveat to the bulb’s pitch is that it’s quite poisonous both to humans and pets. But with the proper precautions, you can enjoy the delights of this flowering lily without putting yourself or your household at risk. Read more to find out how to grow and care for the Amazon lily and get it to flower not just once but twice a year.

All About Amazon Lily

The Amazon lily (Eucharis amazonica) is an umbrella term that includes as many as 20 species of lilies. Native to the tropical Amazon forest, the bulb grows well in zones 10 and 11. Outside of those two zones, you’d have to grow it in a greenhouse.

In its natural habitat, the evergreen perennial bulb grows in the shade of trees, bushes, and other larger plants. So by nature, it craves partial shade and doesn’t do well when exposed to direct sunlight. The perennial plant has shiny dark green leaves that grow to about 22 inches long and 8 inches wide.

But it’s the star-shaped flowers that steal the limelight. They bloom atop a long stalk that grows directly out of the bulb. Each stalk carries a cluster of 4 to 5 flowers. When they open, the flowers are white and showy. They usually bloom in the spring, but you can get the bulb to bloom more than once every year.

To achieve this blooming wonder, you’ll need to withhold water and fertilizer from the bulb until the leaves turn yellow and wilt. Then give the plant a good soaking. The shock of the sudden moisture in the soil will force it to grow flower buds. Withhold water again for 4 weeks, during which time the leaves will drop. Then water on a regular basis until the flowers bloom and new leaves grow.

Technically speaking, the Amazon lily refers to a specific species called Eucharis amazonica. However, in the world of lilies, you’ll find many other species marketed as Amazon lilies. There’s no deception here. All species belong to the genus Eucharis and to be fair, they all have their ornamental qualities that set them apart from the rest of the larger lily family. Here are some of the available Amazon lily varieties to grow in your garden or greenhouse.

How to Grow Amazon Lily

If you live in a colder zone where the temperature drops in the winter evenings, then it’s better to grow the Amazon lily in a container. Paradoxically, the potted lily has better chances of blooming than one growing the garden. As long as you plant it in a small pot and repot it once every 3 years, you can enjoy the beauty of this tropical lily for many years. Here’s how to grow it from bulbs in easy steps.

Contrary to what many people believe, the Amazon lily doesn’t grow in water. It requires moist soil or a growing medium, but waterlogged soil will make the bulbs rot. So don’t try to grow it in a bowl of water. As a sensitive plant to both light and temperature, it requires some attention and a little bit of work to get it growing right. Below we detail every aspect of the bulb’s care to ensure you keep your Amazon lily in good health and shape.

The type of soil you plant the Amazon lily depends on whether you grow it indoors or outdoors. For garden planting in zones 10 and 11, make sure the soil drains well and has plenty of organic materials. The bulbs don’t do well in clay soil because of their high water retention. As for indoor planting, choose a general-purpose potting mix and amend it with humus and compost. This improves the soil’s drainage. Make sure the pH levels are between 5.6 to 6.4. Slightly acidic soil is great as long as it’s not too acidic or too alkaline.

The water requirements of the Amazon lily vary by the season and whether they’re potted or growing in the garden. For potted plants, maintain moist soil throughout the growing season. This might require watering the bulbs every other day during the summer months. If the soil doesn’t lose moisture that quickly, then water it lightly every other day. For outdoor lilies, give the bulbs one inch of water or less. Don’t let the top 2 inches dry out, and don’t overwater either. The only time you’d want to dehydrate the lily is when you’re trying to coax it to flower, as we explained above.

As far as tropical plants go, the Amazon lily likes warm temperatures and high humidity. It grows best when the temperature is between 65 to 75 degrees all year round. If the temperature drops below 55 degrees F at night, you risk losing the flowers. If that continues, the leaves will droop and drop as well. You’ll need to move the potted bulbs indoors in the late fall and bring them back when the weather warms up in the spring.

Humidity has to be somewhere in the higher 70s percent to keep the foliage shiny green. In dry weather, the plant will not flower, and the leaves will wilt quickly. Place a humidifier next to the potted bulbs if you notice any of these symptoms.

Since the Amazon lily thrives when it’s pot-bound, you’ll need to feed the bulbs regularly during the spring and summer. If the evergreen plant flowers in the winter, feed it with organic compost as soon as the buds emerge. Use a balanced 10-10-10 fertilizer to boost the foliage growth and improve flowering. Start applying fertilizer from the early spring until the last flower drops. A slow-release fertilizer will produce good results as well.

Sooner or later, the slow-growing Amazon lily bulbs will outgrow the small container, and the roots pop out of the drainage holes. That’s your cue to repot them. This might take up to 3 years, or it might happen earlier. The sensitive lilies tend to get shocked when you repot them and might go for a year without flowering. That’s normal and shouldn’t concern you. If the flowers don’t appear by the second year after repotting, try to coax the plant to flower by withholding water and fertilizer until the leaves wilt then watering it.

For the most part, pruning is not necessary. Only when old leaves turn yellow and wilt would you need to remove them. But don’t trim off more than one leaf at a time. Give the plant about a week before you remove another large leaf.

The flowers, for all their beauty, tend to produce a huge amount of pollen. Combined with the high humidity around the pot, the pollen can become a risk hazard. So unless you want to harvest the seeds, you need to deadhead the flowers before they pollinate. Cutting the flowers before they finish their life cycle also triggers the bulbs to grow more flowers to replace the lost ones. As usual, don’t cut more than one flower at one time.

Caterpillars and spider mites are the two frequent visitors that prey on the thick leaves and flowers of the Amazon lily. Caterpillars feed on the sap in the leaves and sometimes would sample the bulbs leaving big holes in them. This could prove detrimental to the plant itself. As for spider mites, they cover the leaves and stalks with their webs which causes them to turn yellow and wilt. Treat both pests with neem oil. You can also pick the caterpillars by hand and drown them in a bucket full of soapy water.

Root rot is the most common disease for the Amazon lily. It’s often the result of poor drainage soil and overwatering. If left undetected, root rot could be lethal. It affects the roots, bulb, and crown. You can still save the plant if the bulb is still healthy.

Every part of the Amazon lily is highly toxic. This includes the flowers, leaves, stalks, bulbs, and roots. Humans and pets alike will suffer if they ingest any part of the plant. Signs of poisoning include excessive thirst, rash around the mouth, nausea, vomiting, and stomach cramps. You should seek immediate medical help in case of poisoning.

When handling the lily, you need to wear protective gear. Don’t touch the plant with your bare hands since any scratches in the skin could become itchy and trigger a rash.