When it comes to cooking for our annual Fourth of July potluck with friends, we’re always the ones who offer to make and bring the dessert. There’s just something so satisfying about making a sweet treat from scratch and seeing it bring joy tp the faces of family and friends! Being as crafty as we are, however, we’re sure it’ll come as no surprise to you that we’re always on the lookout for DIY ways to decorate or make whatever it is we’re baking to look as fitting to the occasion as possible. That’s why we’ve been keeping our eyes peeled lately for different awesome recipes and decor techniques for Fourth of July cupcakes! That’s what we were asked to bring along this year by the hose, and we intend to make them the most festive cupcakes we’ve ever served.

Just in case you love the idea of making some awesome DIY Fourth of July cupcakes just as much as we do, if not more, here are 15 of the very best ideas, decorating designs, and flavours that we’ve come across so far in out search for good recipes! 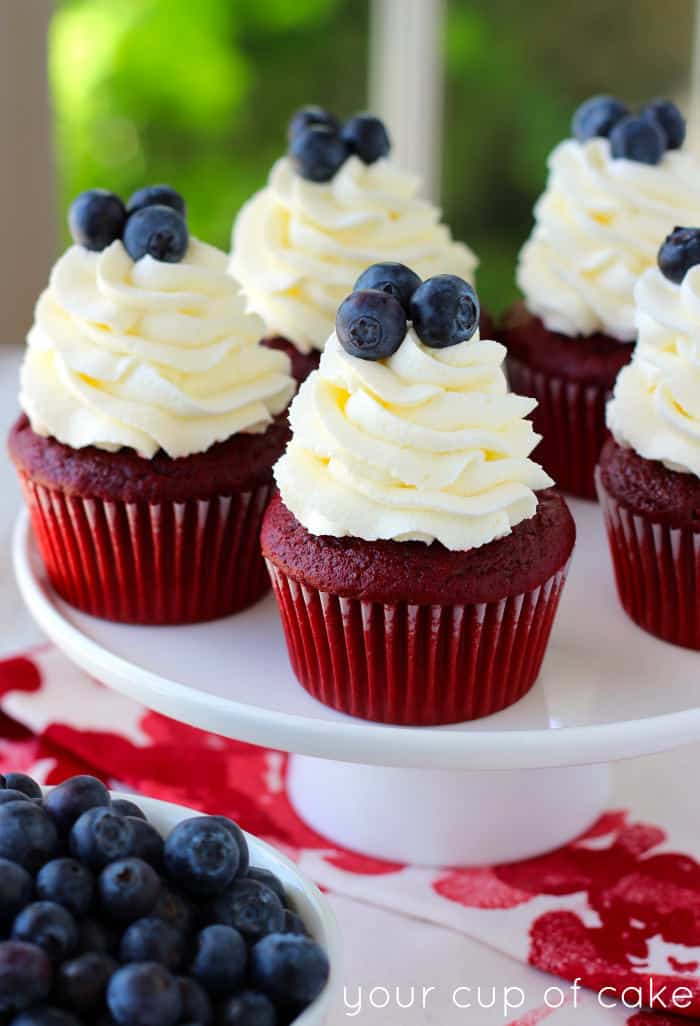 Maybe you’re actually quite new to the idea of of baking and decorating cupcakes so you’re really just looking for something classic and simple, but you’d like to at least keep the colour scheme going? In that case, we’d absolutely suggest taking a look at how Your Cupcake made these red velvet cupcakes with white whipped cream ice cream, topped with blueberries! 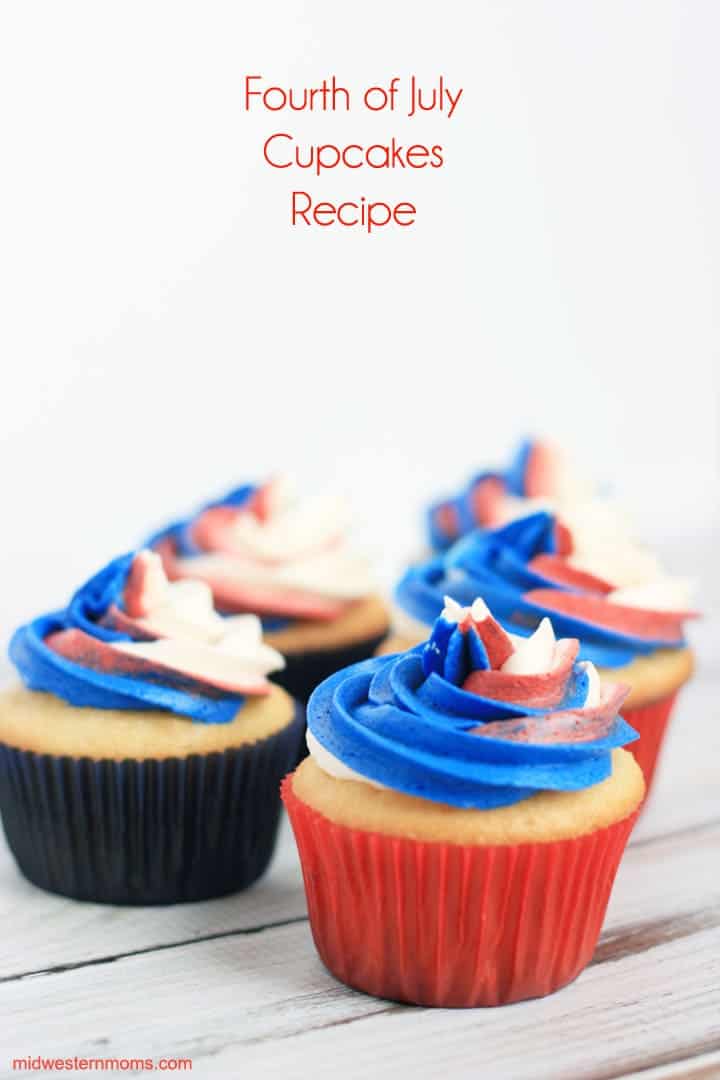 Do you actually know that you’re going to be in a little bit of a hurry around July 4th so you’re thinking of just making the same regular cupcakes you’d always make, but you’re looking for an easy DIY to add some flair to them? In that case, we’d absolutely suggest checking out how Midwestern Mom filled their icing tube so that their resulting topping swirls red, white, and blue. 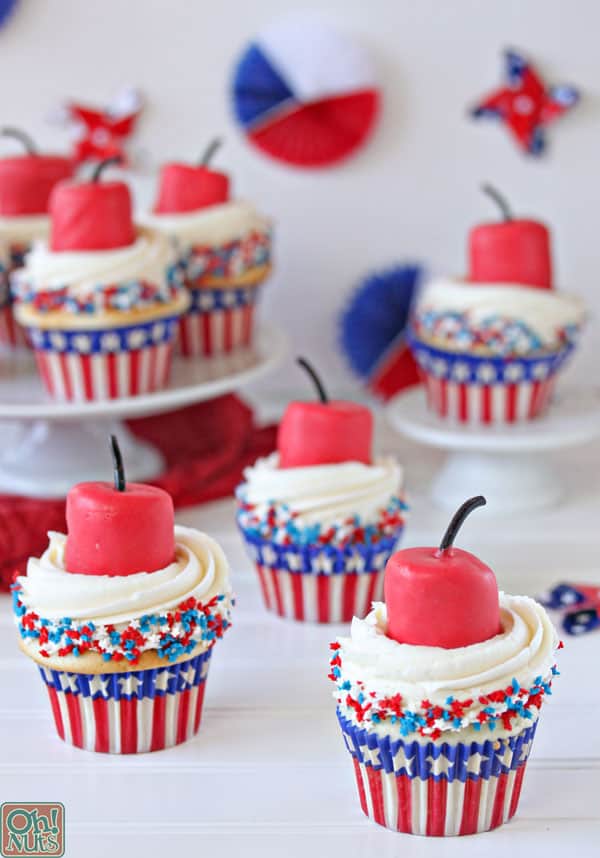 If you’re going to dress up the tops of your cupcakes to suit a Fourth of July theme, would you rather go all out and make them very unique indeed? Well, if you like marshmallows at all, then we think you’ll get a real kick out of the way Oh Nuts made their cupcakes look like fireworks by dipping marshmallows in red melted chocolate and adding a bit if liquorice shoelace like a fuse!

4. Cupcake flag with berries and coconut

Rather than just adding even more sugar to your cupcakes than they already contain, especially once they’re iced, would you rather make a version that has at least a little bit of fruit involved? Well, if you’re interested in also following some kind of colour scheme, then we think you’ll really like the way Good Housekeeping used blueberries, strawberries, and shredded coconut as toppings to make cupcakes that are easily arranged into a deliciously sweet American flag! 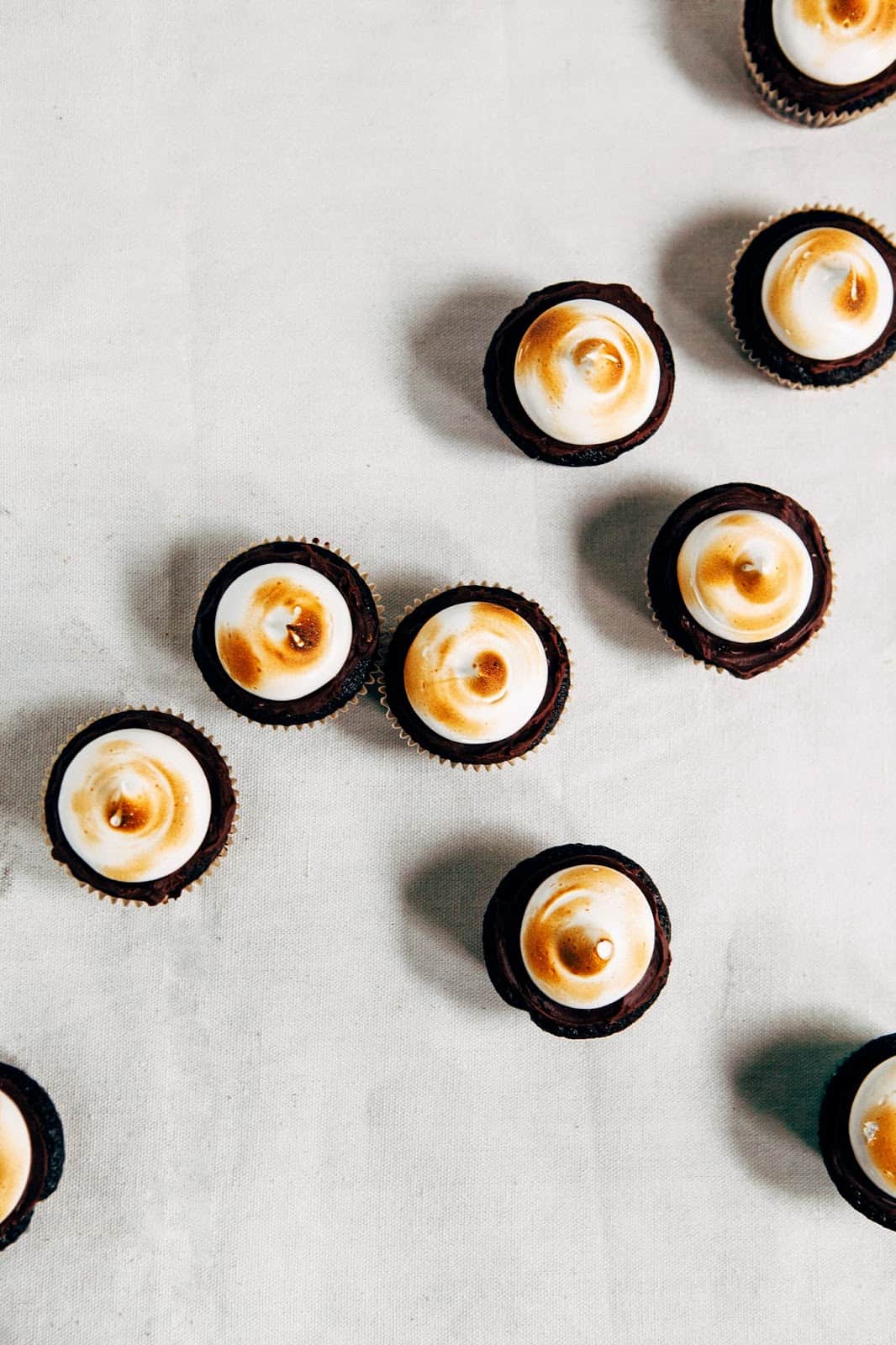 Rather than making Americana themed cupcakes that look like they’re themed for the Fourth of July, would you actually prefer to just make a flavour that reminds you of nice summertime childhood memories around this time of year? In that case, we’d absolutely encourage you to take a look at how Hummingbird High made these triple chocolate, double graham S’more cupcakes instead! 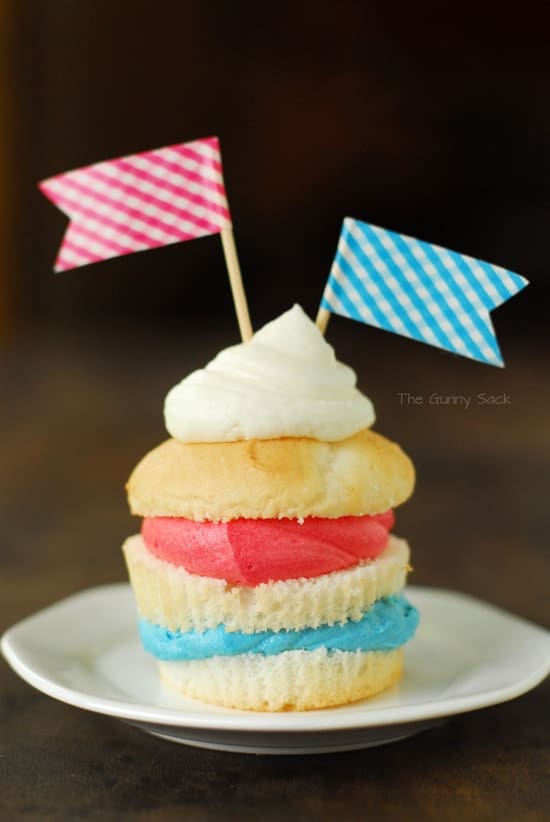 If you’re being totally honest, has the icing always really been your favourite part of just about any cupcake? In that case, we have a feeling you’ll really enjoy the way The Gunny Sack made these red, white, and blue layered cupcakes that involve cutting each one into three and then stacking them back together with icing in those colours in between to make them stick! 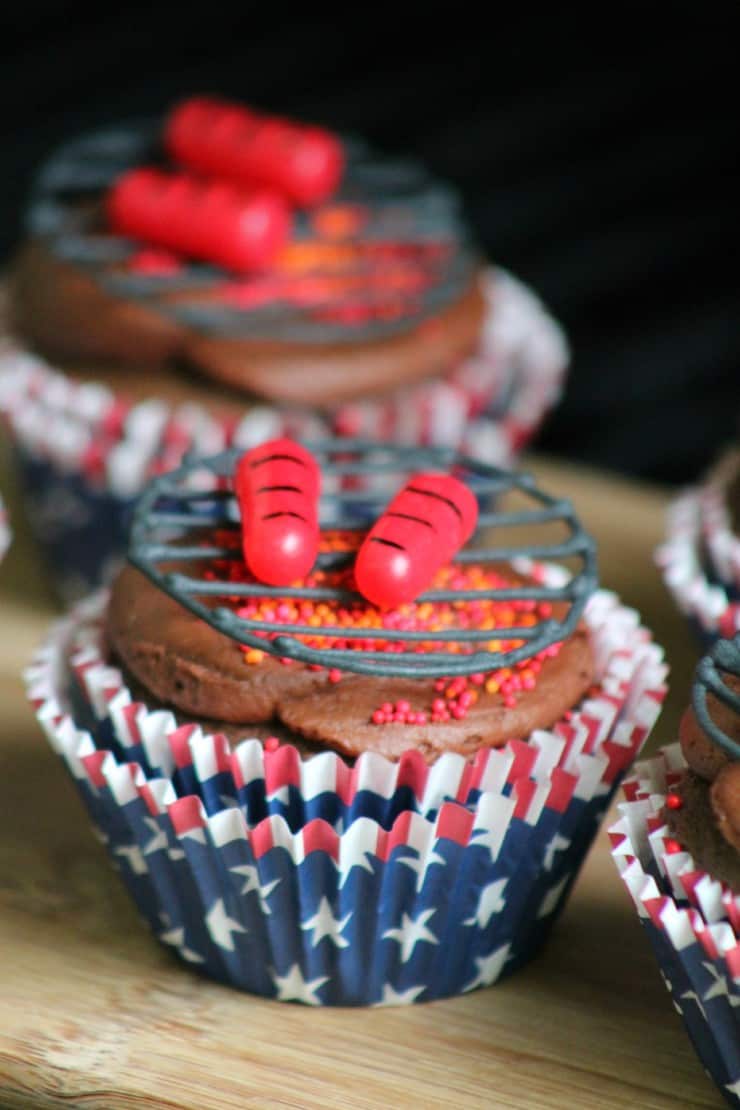 Have we really caught your attention with the idea of making all kinds of novelty cupcakes that follow the summer Independence Day BBQ theme but you’re just not sure the fireworks idea we showed you earlier was the right one because you’ve never liked marshmallows? Then perhaps you’ll get more of a kick out of the way Life Love Liz made these funny cupcakes that look like hot dogs on a grill. 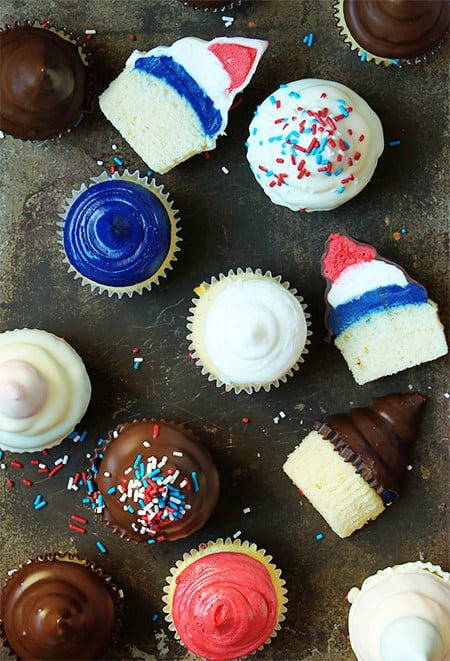 Are you actually quite an experienced baker so you’re looking for a themed decor idea that’s a little bit more of a challenge than some of what you’ve seen so far? In that case, we’d definitely suggest taking a look at how I Am Baker made these Fourth of July hi-hat cupcakes! They show you how to ice the tops of your cupcakes in red, white, and blue layers and then carefully dip the tops of each one into melted chocolate.

Since you’re known as the best baker in your group of friends, would you rather concentrate on making something unique and delicious instead of just making things that follow a colour scheme? Well, why not do both? We actually made these completely mouthwatering pavlova and berry topped cupcakes from A Cookie Named Desire in real life and we couldn’t get over how quickly they went! Using red and blue berries makes them look the part for the occasion, too.

Perhaps you’ve actually been delving into the world of cake decorating a little more thoroughly and you’re been trying to practice your skills when it comes to make things like decor details from fondant? In that case, you just might be the perfect person to give these adorable Fourth of July pinwheel cupcakes a try! The Cake Blog shows you how they’re done nice and clearly, step by step. 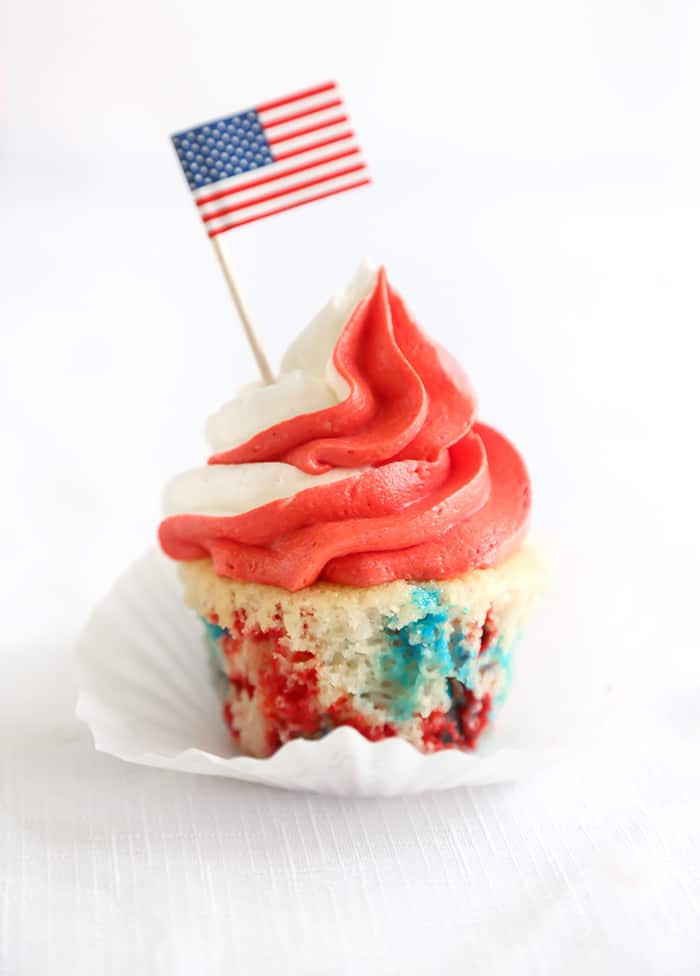 If you’ve never made confetti cupcakes before then we’re here to tell you that you’re in for a real treat! We’re obsessed with the simple way Sprinkle Bakes added red and blue flecks to vanilla cake mix in order to make colour schemed sponge, creating an icing swirl with the same colours on the top and even adding a little toothpick flag for good measure! 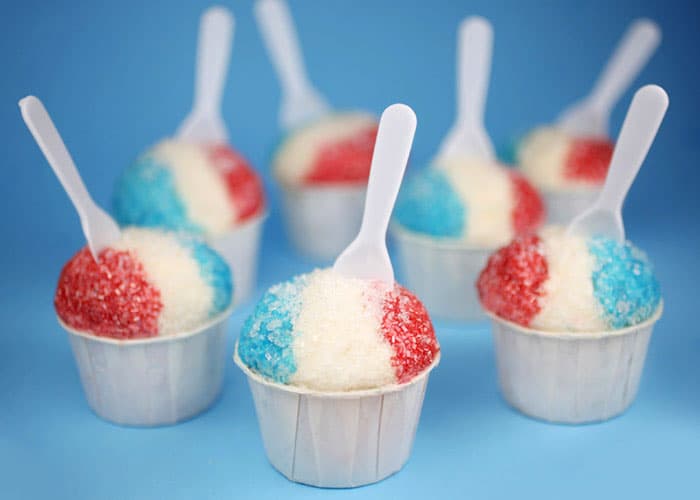 Have you ever made miniature or bite sized cupcakes before? Well, it not, then now is the perfect time to start! We’re completely obsessed with the way Bakerella made these adorable little cupcakes that look just like patriotic snow cones thanks to the way they’re iced, sugared, and made in paper condiment cups. 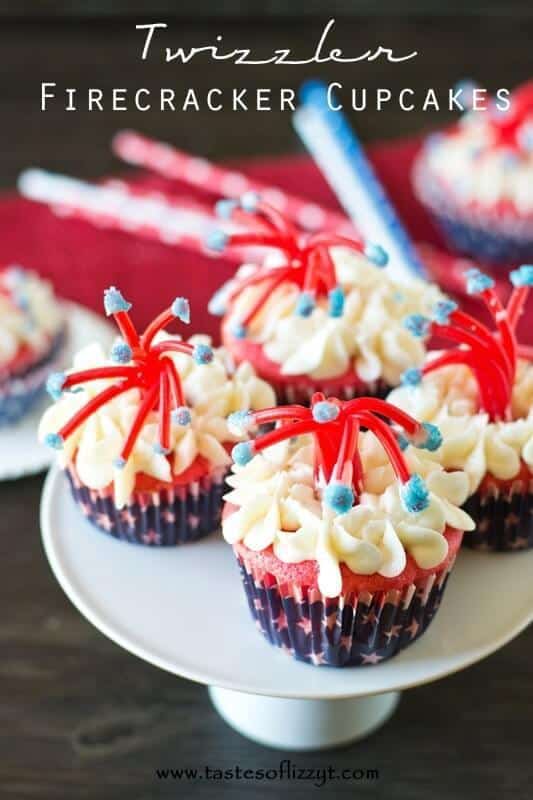 Did we actually really catch your attention when we started talking about cupcakes that look like fireworks, but you were really picturing actual bursting fireworks in your mind, not just the unlit version we showed you before? In that case, we think you’ll find that this exploding firework cupcake concept outlined step by step on Tastes of Lizzy T might be  little more up your alley! We appreciated the way they used partially peeled Twizzlers to make it happen. 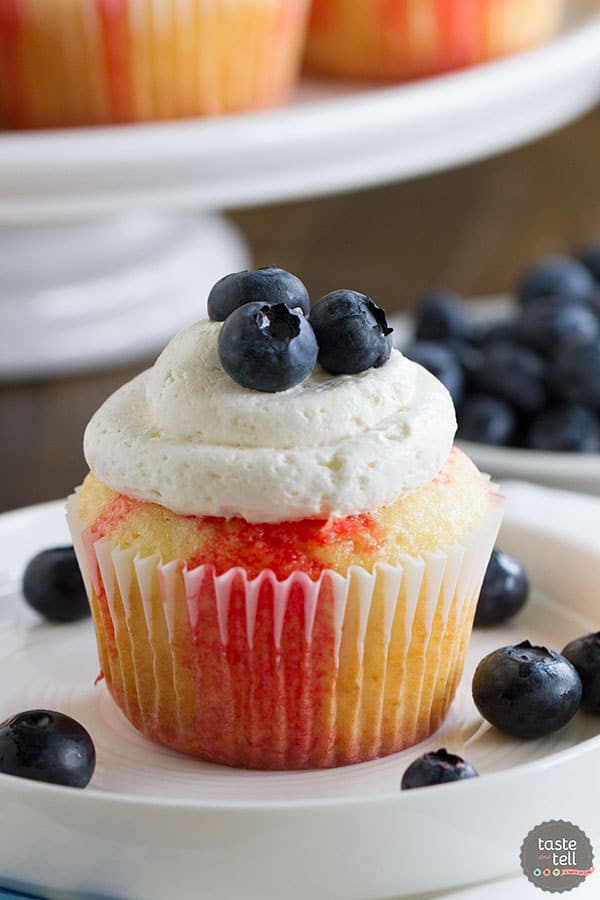 If you’ve never made a Jello poke cake before then, once again, we’re here to tell you that you’ve been missing out once more! Taste and Tell is here to show you how to not only make the cupcakes with the little flecks of delicious red Jello amidst the white vanilla sponge, but also how to top it with white buttercream icing and garnish it with blueberries! 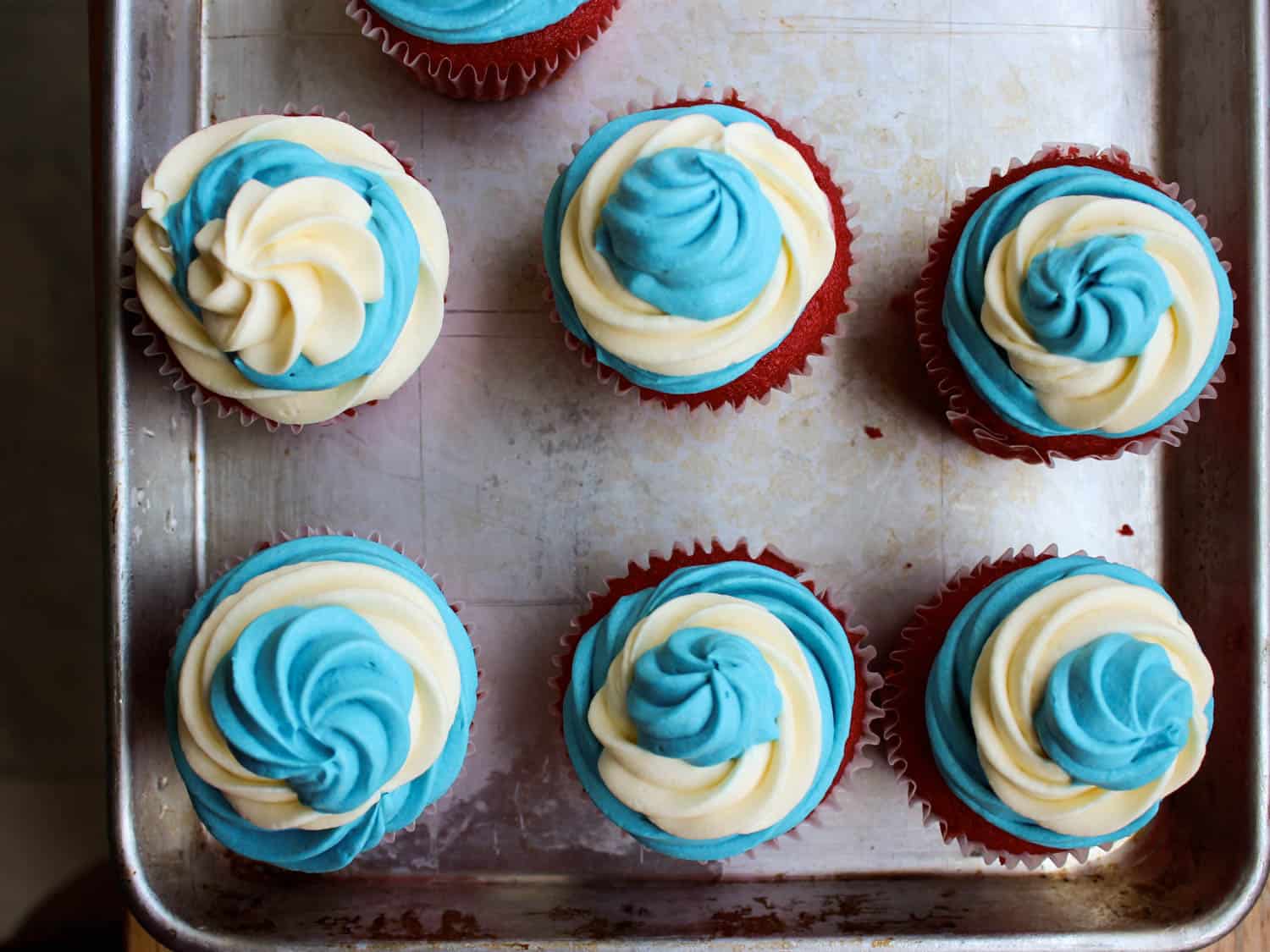 Even though you’ve been looking for different cupcake ideas because you’re pretty settled on those as your patio party choice, have you also been thinking about how nice it would be to have some cool treats there too, just to keep everyone feeling refreshed? In that case, we think you’ll simply adore the way Serious Eats made these ice cream filled Fourth of July cupcakes that give you the best of the both worlds and follow the colour scheme that suits the day!

Do you have another favourite kind of fourth of July cupcake that’s always a huge hit at your BBQ? Tell us all about it or link us to the recipe in the comments section so we can give it a try too!