Even thought the summer sun is still high where we live, and despite the fact that we are total summer lovers who would be happy to spend long days on the beach all year round, the time has finally come for us to start thinking about fall. That’s why we’ve been looking at our sweatshirt collection and thinking about which ones we might like to wear again this year, which one’s we’ll donate, and which ones we might prefer to upcycle by altering and transforming them into new styles! This is something we thoroughly enjoy doing every year because we love using our creative skills to give old clothes a new lease on life, saving ourselves money but still letting ourselves feel like we bought something new. That’s why we’ve had our eyes peeled for fantastic DIY hoodie and sweatshirt alteration tutorials for so many months now, bookmarking our favourites to try out later in the year once the hot weather has subsided.

Just in case you’re as interested in the idea of altering old sweatshirts as we were, if not more, here are 15 of the best styles, designs, and tutorials we’ve come across so far in our search!

1. Off the shoulder fringe sweater 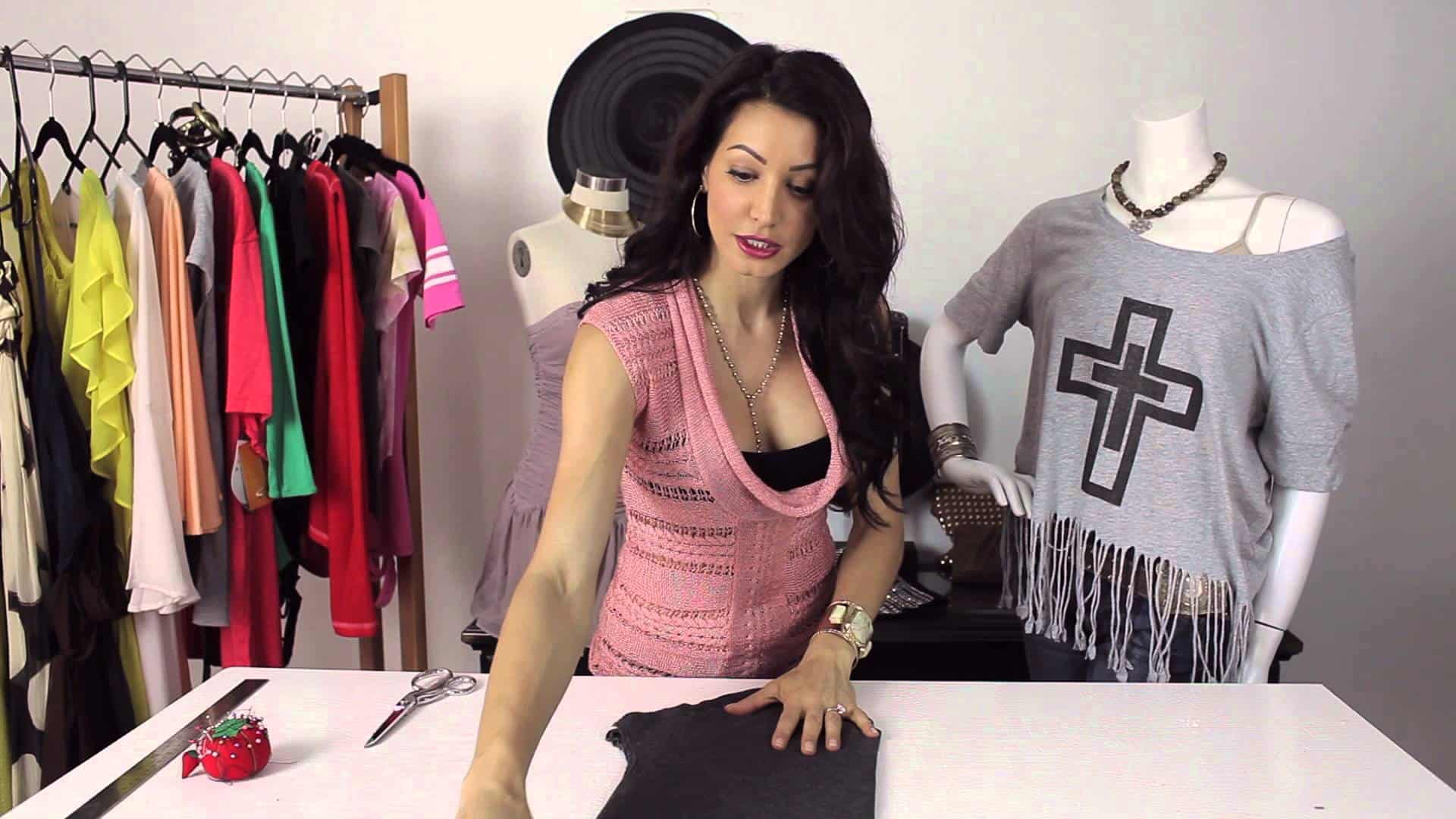 Despite the fact that this particular photo shows the style we want to talk about being created on a t-shirt, we’ve actually used these techniques to transform a sweatshirt in the past and been very happy with the results indeed! We love the way E-How Beauty cut the neckline of their shirt wide to create an off the shoulder style at the top, as well as how they cropped the style not just by cutting the bottom half off, but by cutting it into thing, stylish fringe for a little extra appeal! You might also crop your sleeves like you see here or leave them long, which is what we did when we used this tutorial as a guideline. 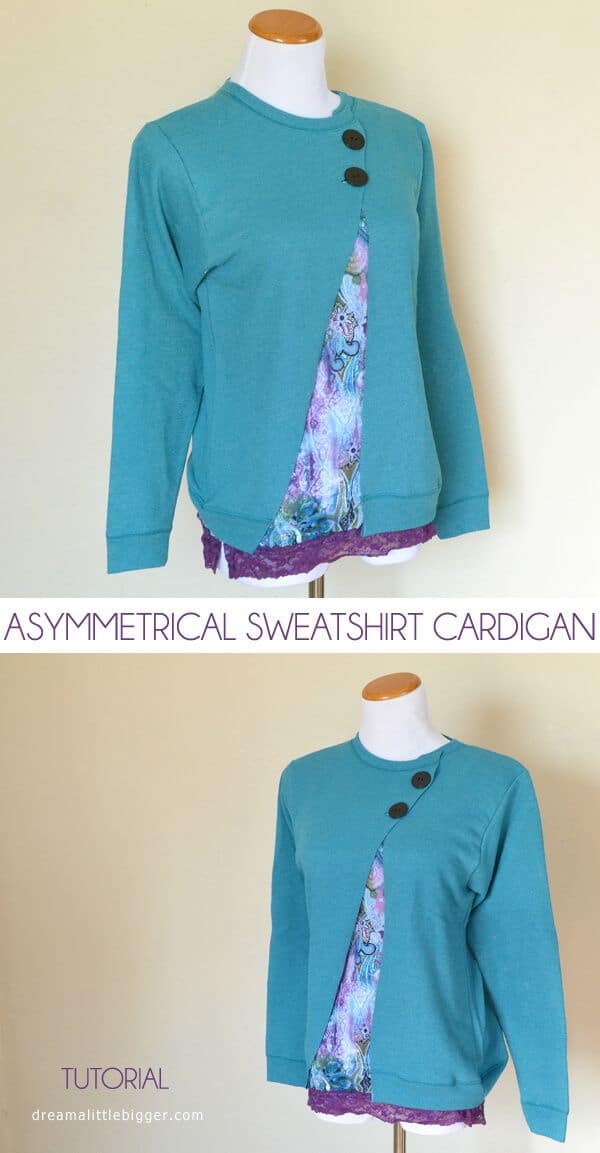 Do you have a plain old crew neck, hard front sweatshirt that you adore the colour of but that you just don’t wear anymore because of the way it fits a little tighter or looser than you’d prefer? Perhaps you’re just over the pullover style of sweater and would prefer something that opens at the front. In either case, we really think you’re going to love the way Dream a Little Bigger created a cardigan style sweater made of sweatshirt material by cutting an asymmetrical line up the front and attaching a couple buttons near the top. You’ve taken that lounge sweater and turned it into something slightly classier that you could wear to work!

3. Cut out and twist sweater yoke 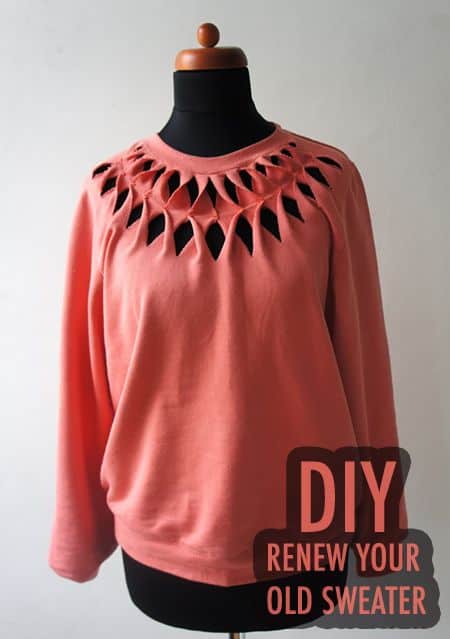 Perhaps you actually do have the kind of based sweater we were talking about above and you really would like to open it up and give it a bit more appeal than what you see on it currently, but you’d prefer it to be a little more unique and unlike something you’d find in stores? In that case, we’d definitely suggest taking a look at how How to Be Perfect made cut-outs around the yoke of their sweatshirt and twisted the strips to refasten them in a way that increases the visual appeal of the plain garment one hundred fold! 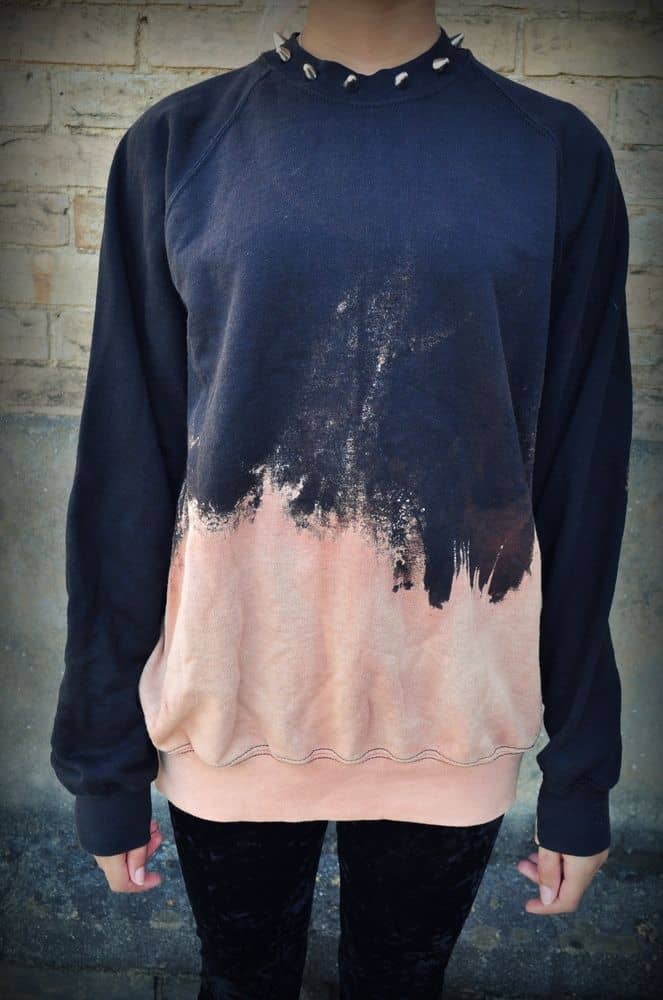 Are you perhaps looking to turn a very plan garment into something a little more hardcore and edgy looking, but you’ve never actually been one for large reconstructing projects that involve cutting or sewing? Well, all is not lost yet! We’d absolutely suggest checking out how Secondstreet used a dip dying technique but replaced the dye with bleach in order to remove colour from a dark sweater while still getting that awesome faded in colour effect. We’re also totally enamoured by the DIY studs they added all around the collar to add a slightly metallic glint to the look! 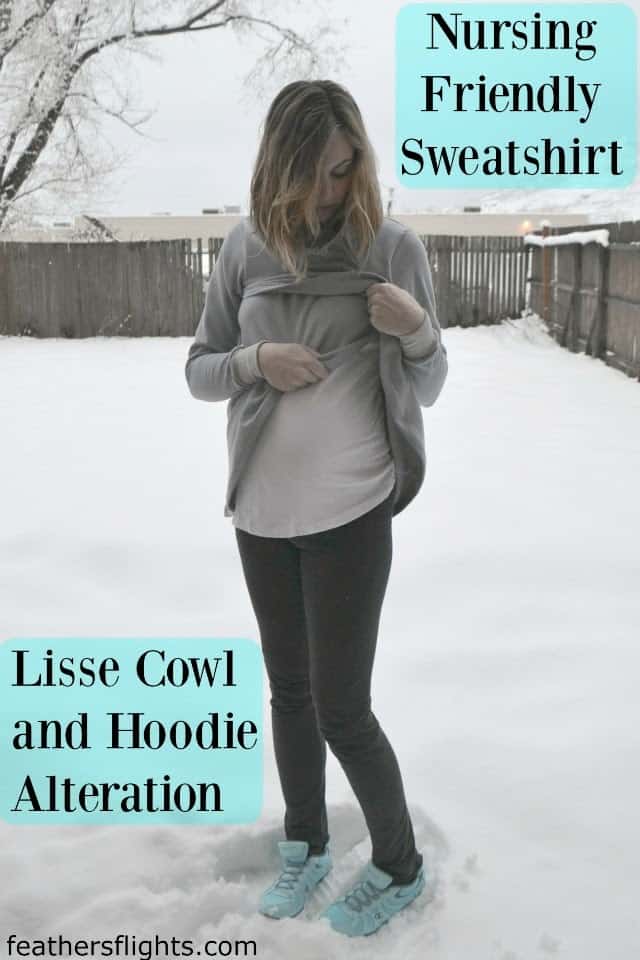 If you’re going to go to the trouble of making yourself a new hoodie from an old garment, would you rather make yourself one that has some kind of practical feature, rather than just added a style element that doesn’t really help you since you’re expecting a baby soon? Then we’d definitely suggest taking a better look at how Heather Handmade altered a large, oversized pullover into a layered breastfeeding sweater that gives you both easy access and coverage while trying to feed your little one. We adore projects that get you feeling creative and make life easier for you all at once! 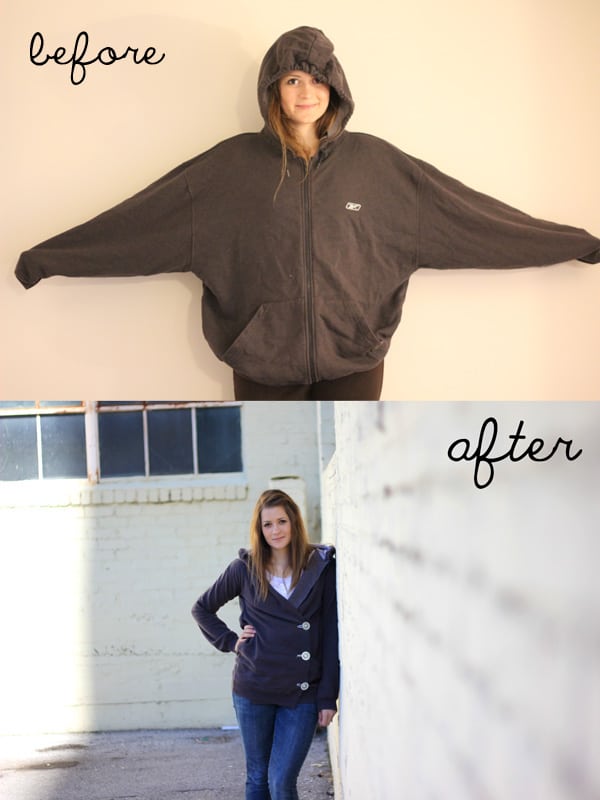 Have the words “sweater cardigan” and “oversized” really been the things that have caught your attention the best as you’ve been scrolling through our list so far but you’re just not sure you’ve seen the thing that has you convinced to stop scrolling and get started so far? Then here’s another similar alternative to those ideas for you to think about! We can’t get over the difference between See Kate Sew‘s starter sweater, which is worn looking and far too big, and their finished product, which is fashionably styled and tailored well in the way it fits. We also think their pattern name is amusing! 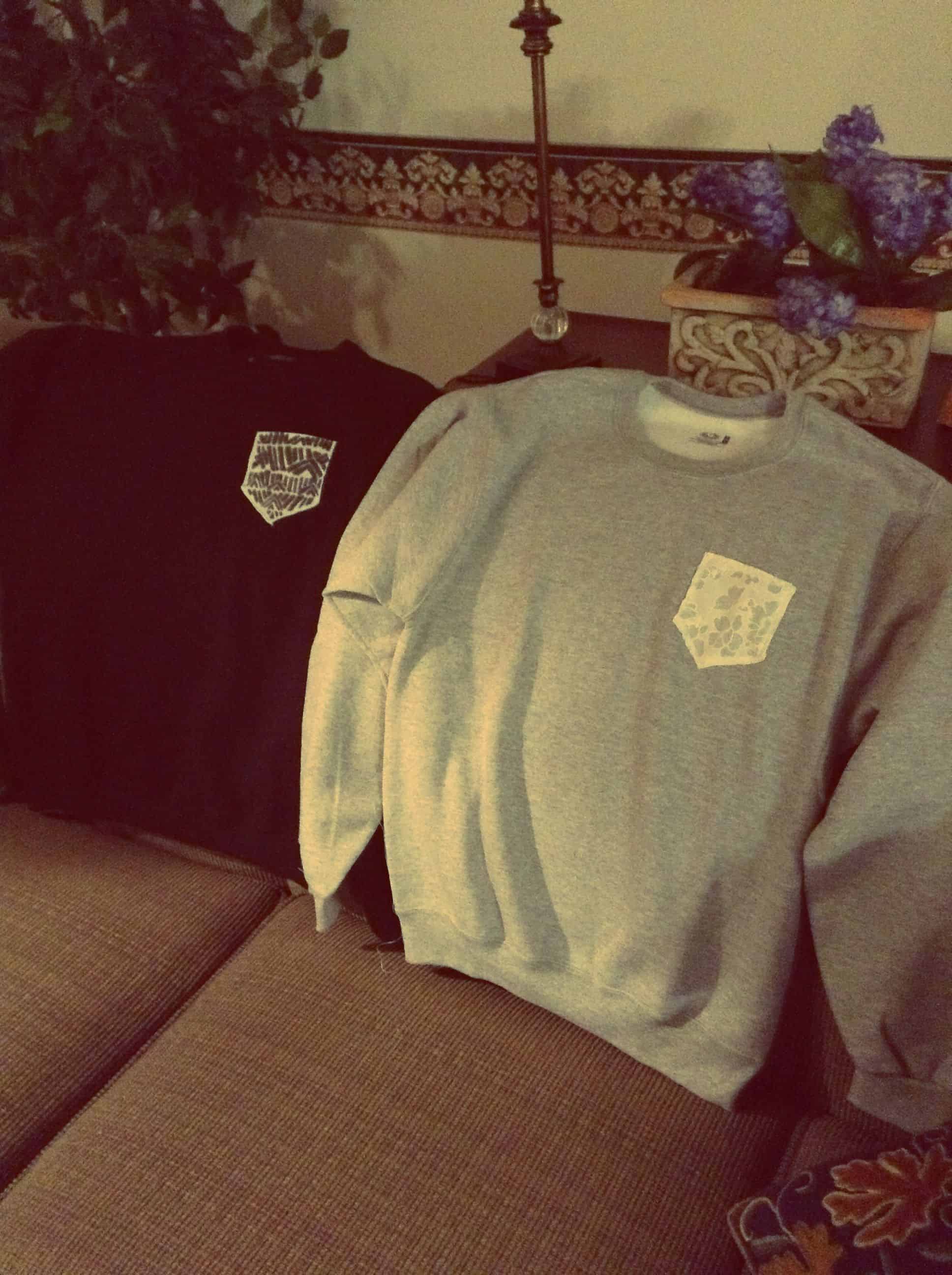 Perhaps the basic pullover style sweatshirt you’ve got to start with is actually basically brand new and is something you’d honestly where as-is… if you didn’t already have so many that are similar? Then maybe adding some kind of extra personality or embellishment to it would be the best idea for you, just to differentiate it in a pretty way from the others in your drawers! We simply adore the way Metafilter sewed a little lace pocket onto the front of their sweatshirt like a practical little applique. 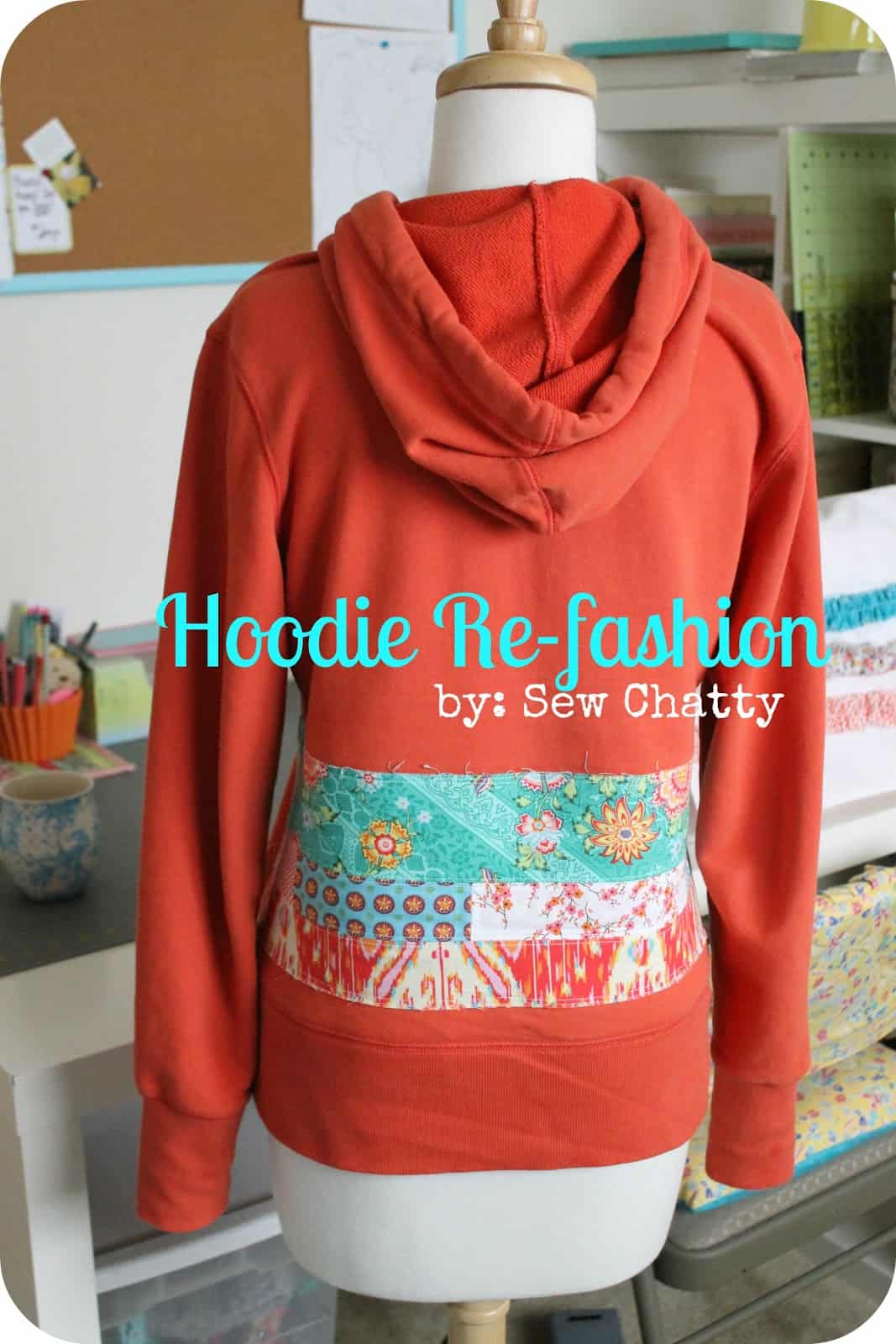 Speaking of appliques, is that the best concept or technique you’ve seen so far on our list, but you’re actually so in love with the idea that you’d rather try something that lets you do it even more than you’ve already seen here? In that case, we’d definitely suggest taking a look at how Sew Chatty used scrap pieces of fabric to not only create homemade appliques but also to attach them in stripes across the back of an old hoodie to give it a little more personality. 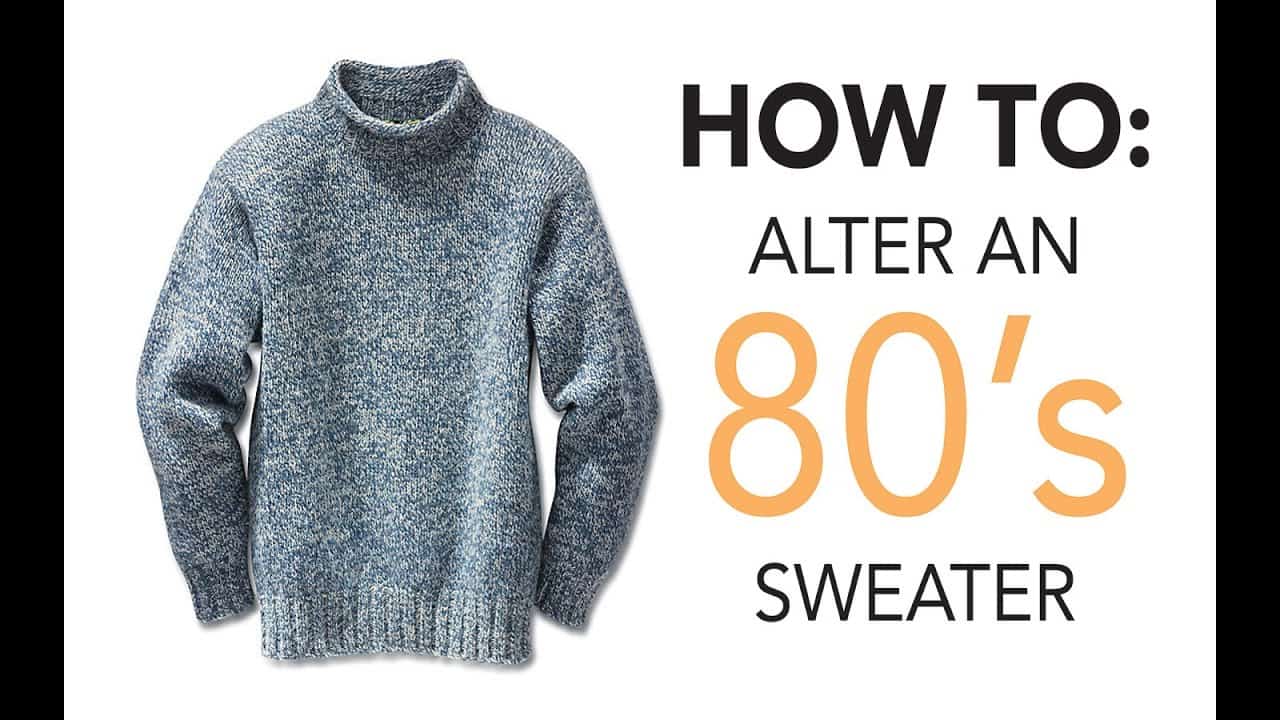 Have you recently found an old, oversized sweater in your closet that is clearly from the 1980s but has been lying around in your family home for a long while? Well, before you donate it, we’d definitely suggest taking a look at how Sew Anastasia altered theirs in several simple ways in order to make a much more updated sweater that you’ll actually wear and that looks like something you’d probably pay a decent amount of money for in stores right now!

10. Upcycled hoodie with a ruffled skirt 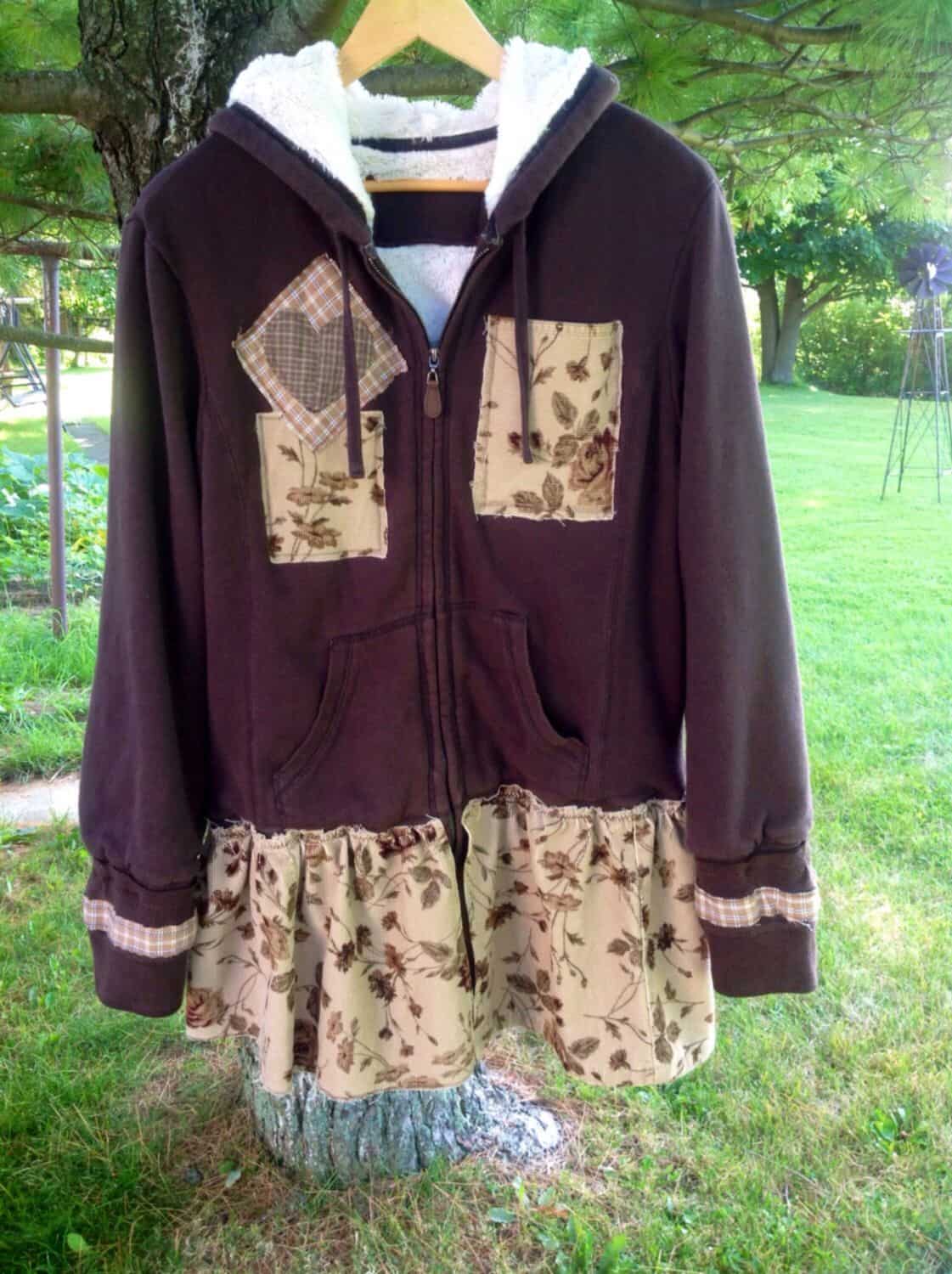 Are you the kid of family who loves hand-me-downs and thrives on saving money by shifting clothes from one kid to another, but your little girl is a touch older now has is finally growing tired of receiving boyish looking sweaters and hoodies from her older brothers? Then perhaps you can use your creative skills to fancy the next one they pass on to her up a little bit and make it look slightly more feminine! We added some ruffled skirt layers and cute shaped appliques to an old sweater just like Craft Your Home here and our daughter adored it and wears it obsessively now. Just be sure to pick a colour or pattern of scrap fabric that complements or awesomely contrasts the colour of the sweater you’re working with. 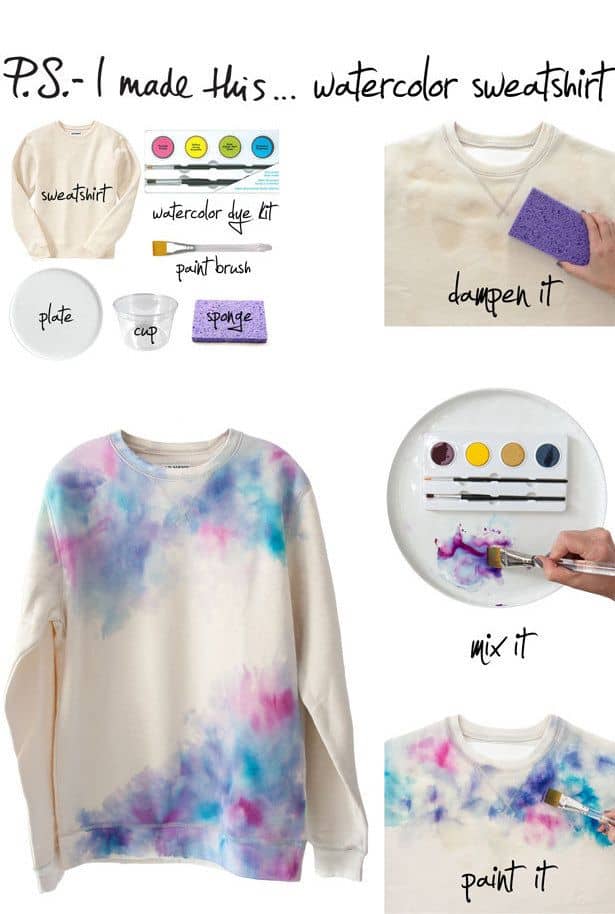 Are you actually quite happy indeed with the construction and basic colour of the sweater you’re hoping to transform but you find it a touch plain so you’re hoping to add a little bit of colour to it instead of changing its shape or the way it’s sewn? Well, if your usual DIY skills actually lie in painting and you’ve ever been a big fan of watercolours, then we think you just might be the perfect person to give this absolutely stunning watercolour effect sweatshirt project outlined step by step on PS I Made This a try! 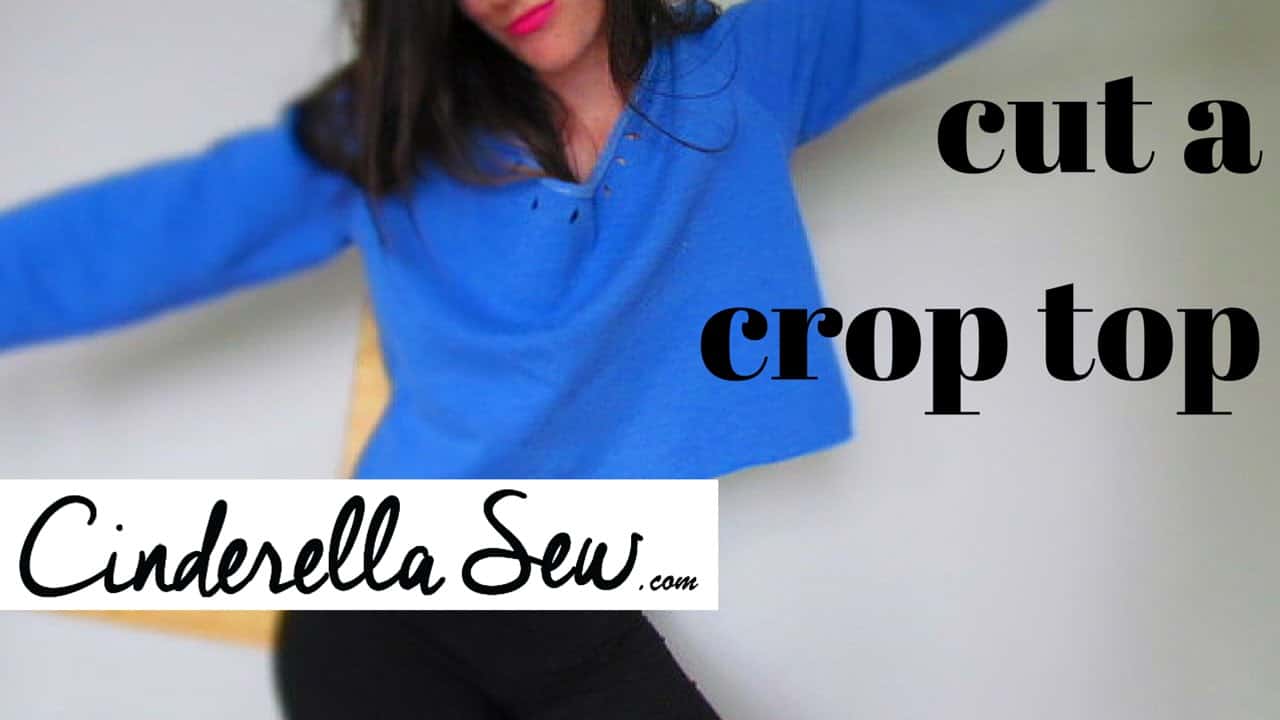 Perhaps the idea that caught your attention the most was the one where we spoke about cutting an oversized sweater shorter to make a crop top, but you’d rather skip the fringe feature we showed you during that tutorial because your personal sense of style is a little simpler than such embellishments really give you? Then we think you might get along a little better with this simple cropped sweatshirt tutorial outlined nice and clearly, in surprisingly few steps, on Cinderella Sew!

13. Cut out and button sleeves

Are you actually feeling kind of obsessed with all of these cut out ideas we’ve been showing you so far but you just haven’t found the one that quite holds your attention enough to make a choice and get started just yet? Then here’s another one for your consideration! We love the way The Renegade Seamstress made a slit down each sleeve and fastened it periodically with little buttons so you get a peekaboo effect between each one. 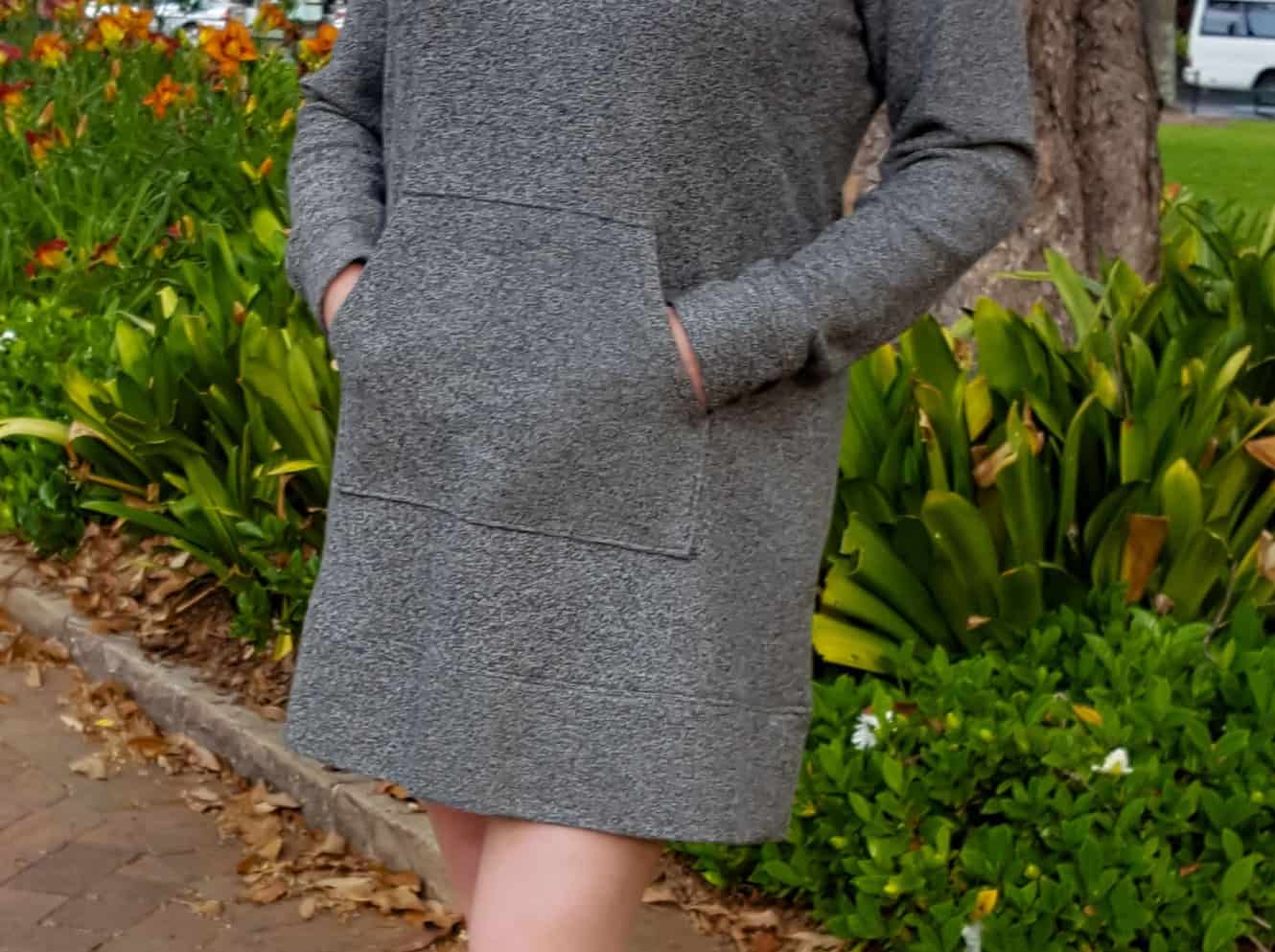 Okay, we know we started talking about DIY sweatshirt alterations, which kind of communicates that you’d be starting with a particular sweatshirt that’s already made and just using your creative skills to transform it and change its construction, but what if you’re a “from scratch” kind of person and scrolling through our list has simple made you realize that you’d rather just sew your own right from the start? Then this fantastic DIY sweatshirt dress sewing tutorial featured on Sartorial Seamstress is absolutely the best choice for you. 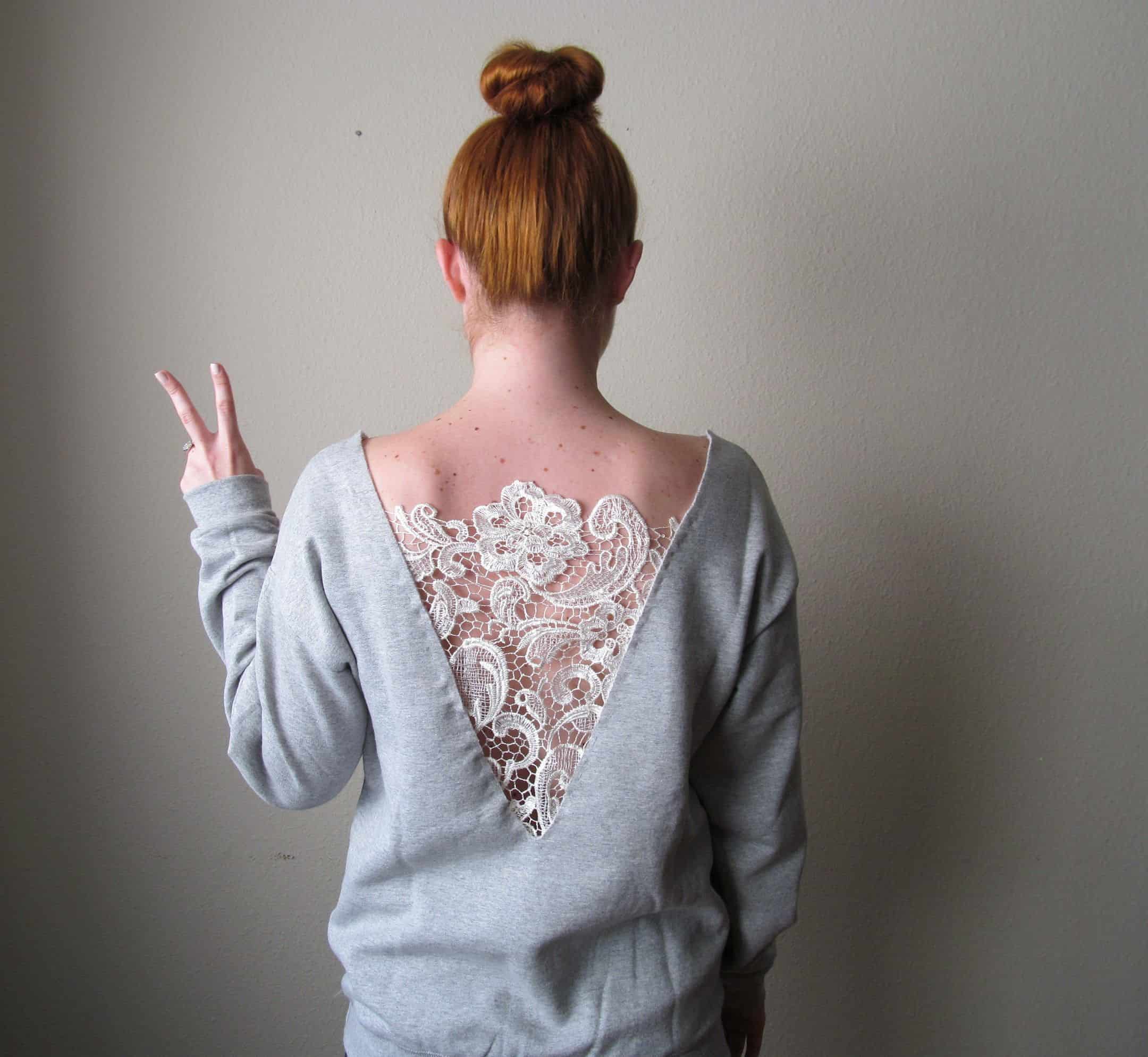 Are you actually still thinking about the cut-out ideas we’ve shown you so far but you also know that you’re a total sucker for all things pretty and lacy, so you’ve been scrolling through our list (and maybe others as well) hoping to find a unique, girly pattern that you think really matches your personal aesthetic? Well, look no further than this wonderful tutorial from Middle R that shows you how to fill and dramatic V-shaped back cut-out with delicate lace in a way that makes even the most casual garment look absolutely lovely.

Do you know another crafter or DIY enthusiast who absolutely adores altering their own clothes but could definitely use a little bit of inspiration now that fall is coming? Share this post with them so they have all kinds of awesome sweatshirt designs and ideas to try!