Are you engrossed by trailing plants because of their showy appearance when growing inside hanging baskets? Then you want to try the String of Nickels out. This vining succulent is a member of the Apocynaceae family, and its species name is Dischidia nummularia. 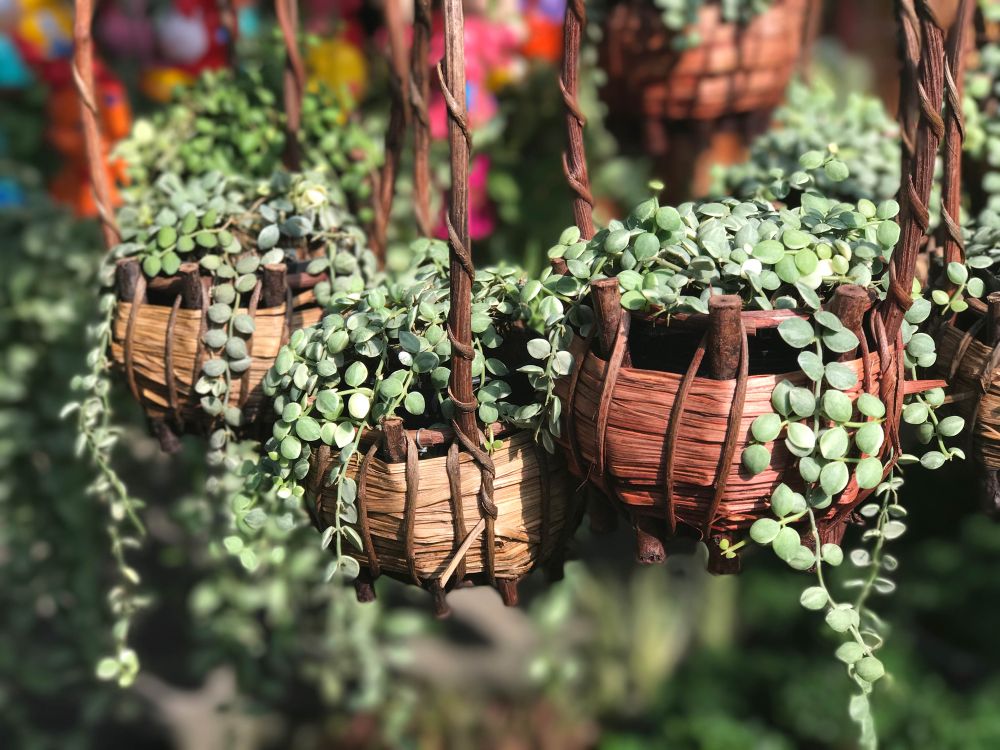 It’s native to Asia, Australia, and India. What’s mind-blowing about this tropical plant is its epiphyte traits resembling air plants such as the Tillandsia. So, in its indigenous place, the string of nickels grows on other plants like trees and sources lots of humidity from the air. Now, let’s check out the basics of growing and caring for this houseplant.

More About the String of Nickels

The string of nickels is a tropical epiphyte that’s well-liked by most homeowners because the maintenance requirements are relatively easy to follow up. And since it can’t tolerate frost conditions, the succulent is commonly grown as a houseplant. The only exception that would allow you to grow them outdoors is if the temperatures are constantly warm and when the variations are somewhat negligible. Because this plant is accustomed to tropical environments, you also need to continually keep up with its humidity needs.

When growing inside a hanging basket, this epiphytic succulent can become rootbound, so it’s best to transplant it annually. On average, the string of nickels plant can spread between 8 to 10 inches wide and trail to whichever length you wish them to be. The leaves are succulent, look tiny, and have a round shape. When the foliage is healthy, it will have an olive green to bronze shade, except for when it’s burned by intense heat from the sun.

During the blooming phase, you might spot a few pale-yellow flowers that are usually tiny but hard to ignore. Usually, the flowers appear around spring but don’t expect them to last forever. Some will produce white blooms, depending on how the pigments on their cells interact with the light conditions. But for the most part, this succulent is usually grown for its foliage. 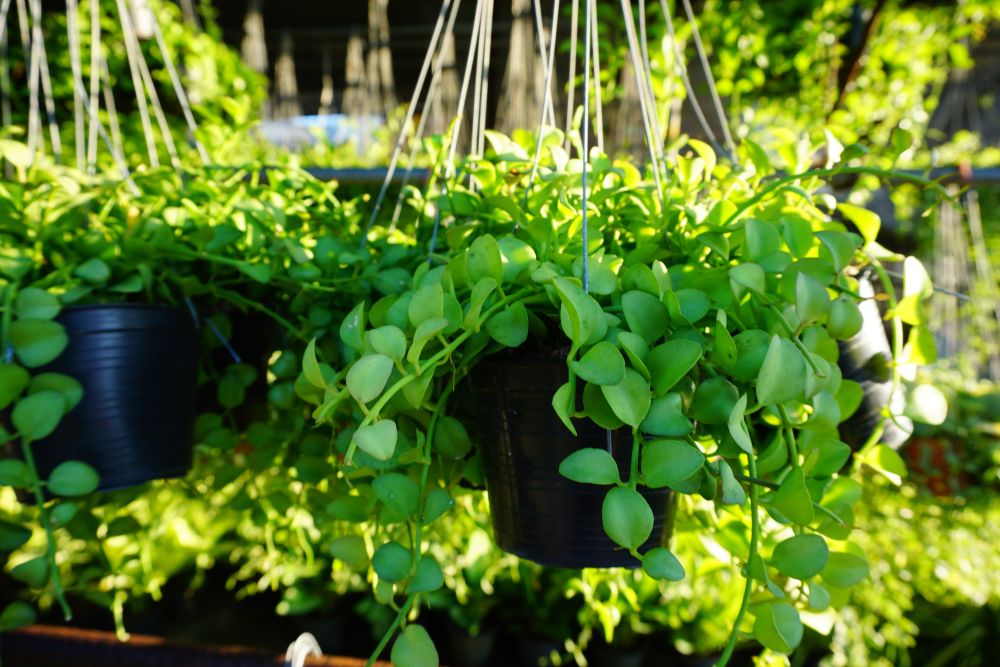 Generally, the Sting of nickels plant is reasonably accustomed to growing indoors. And for this reason, it can tolerate low-light conditions without looking pale or feeble. For access to low-light, place the growing medium close to a north or east-facing window where the number of hours the plant gets sunlight is evened out between morning and evening hours. And if you’re looking to grow your string of nickels plant outdoors, it’s best to place the container in places with a partial shade like porches or patios. The plant gets sensitive to the scorching afternoon sun, which can potentially burn the leaves. So, in a nutshell, half a day of filtered light would suffice. And if it’s growing under direct sunlight, the trailing epiphyte will temporarily tolerate the intense heat, but roughly for two hours or even less.

When growing outdoors but in a sheltered spot, you want to check whether the environment is a bit humid. Also, it’s best if the plant receives enough air circulation to lessen any potential spread of fungal infections, promote transpiration, and reduce condensation on the leaf surfaces. Before planting this plant outdoors, it’s worth noting that it hardly tolerates strong winds, especially in the early growing stages. Apart from placing the medium in a reasonably humid location, the plant also needs to grow in a warm environment. Even though it’s a hardy succulent capable of thriving under USDA zones 9 to 11, the string of nickels can’t withstand frosting conditions.

But, despite the recommended growing zones, tweaking the indoor conditions would make it possible to grow the succulent as a houseplant. Outside zones 9 to 11, don’t expect the succulent to showcase its winter hardy traits. It’s typical for it to survive under an average humidity level. But, if possible, grow this Dischidia species in a spot where the household humidity is a bit higher—say, in the kitchen or bathroom. As a tropical plant, your string of nickels will for sure enjoy such kind of environment throughout the seasons. On average, the houseplant will do well in temperatures ranging between 40 to 80 degrees Fahrenheit.

What matters most to this tropical plant when it comes to the soil requirements is drainage. Apart from keeping drainage in check, it’s best to use a soil structure that’s light and well-aerated to give the roots enough air circulation and enhance the absorption of essential nutrients. And since tropical plants need a humid environment, you still want to use soil that retains moisture. To promote moisture retention, you can amend the potting soil with peat moss or tree barks.

The downside of using regular potting soil is it’s too compact and doesn’t allow the roots to breathe, so you might need to add a portion of sand before planting your string of nickels. Besides adding coarse sand, using a humus-rich potting mix, whether planting it inside a hanging basket or outdoors, not only helps with moisture retention but also improves drainage drastically.

So, the other solid option would be to use a cactus potting mix and then add organic matter that the roots will feed on to acquire the essential nutrients. When growing this succulent inside a hanging basket, you want to pick one that’s pretty large to avoid transplanting it anytime soon. It’s also worth noting that the plant would experience stunted growth if the plant begins to show some root-bound symptoms. If necessary, you’ll need to transplant your string of nickels once the blooming season is over.

For a tropical plant that prefers a humid environment, there’s an excellent need for leaving the soil evenly moist. Despite that, you still don’t want to keep the roots waterlogged. Soggy soil that takes longer than usual to drain is a recipe for disaster. In addition, if the roots sit in water for lengthened periods, rotting or fungal infections might occur. Instead, leave the soil to dry up in between the watering intervals. You also need to inspect the soil before moistening it once again.

Since this epiphyte species grows well in chunky mixes, there are chances water will drain a lot faster. So, it’s best to learn the drainage patterns when watering, depending on the temperature levels. If it’s too hot, then moisture will evaporate within a short span. Just to let you know, this plant can absorb water through the leaves. And for this reason, you want to keep the plant evenly and regularly moist by misting the leaves, especially during the warmer months, because this epiphyte prefers high humidity.

If your string nickels plant grows in humus-rich potting soil, there won’t be a need to use fertilizer. It’s, however, needful to match up to any essential nutrient deposits that appear to miss in the soil. You can try out the Miracle-Gro plant food for succulents, ideally once every two weeks during a growing season. Use the liquid fertilizer at half its strength to avoid burning the roots. It needs to be balanced, and it’s best to follow instructions on the label before use. If your string of nickels doesn’t appear too needy, you can use the fertilizer once per year only at the start of the growing period.

During the usual grooming and maintenance routine, there won’t be much to do. First, you need to prune any leaves that appear dry, pale, or are infested with diseases. Use a pruning shear that’s sterilized to avoid transmitting the plant much further with fungal or bacterial infections. Cut stems that look leggy to promote new growth.

Check to see whether leaves are beginning to wither. If yes, then it suggests you’re underwatering your string of nickels. When pruning, make sure to wear protective gear. Open wounds on the leaves will ooze some sap that causes skin irritation or stomach upsets when ingested. So, it’s best to grow this epiphyte far from kids and pets. Perhaps it’s also more reason why the plant has been planted inside hanging baskets since decades ago.

How to Propagate the String of Nickels Plant 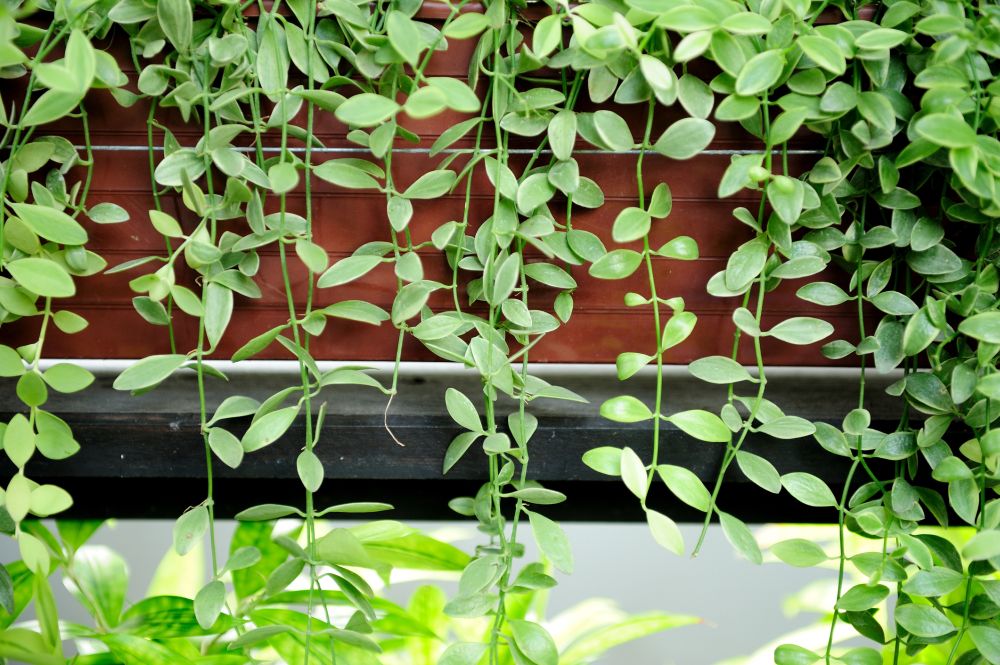 You can quickly propagate the string of nickels plant using stem cuttings. And you don’t need to have any intense gardening experience to carry this exercise out by yourself. The other option would be to propagate using seeds. The downside of using seeds is that they might take a little longer to germinate and become mature plants than stem cuttings. After taking some cuttings from the mother plant, you need to leave them outside so the wounds can have some grace period to heal.

During this period, a callous will form on the wounds. It helps protect the cuttings from catching diseases that would inhibit the overall success rate after propagating. Next, place the cuttings in moist sphagnum moss and wait for a couple of weeks to laps so they can form roots. When handling the cuttings, you need to be cautious and wear protective gear since the cuttings excrete a milky sap that irritates the skin. Once the roots are well established, transplant the cuttings from the sphagnum moss to individual containers. Use organic potting soil with a cacti-like structure to promote drainage and aeration. 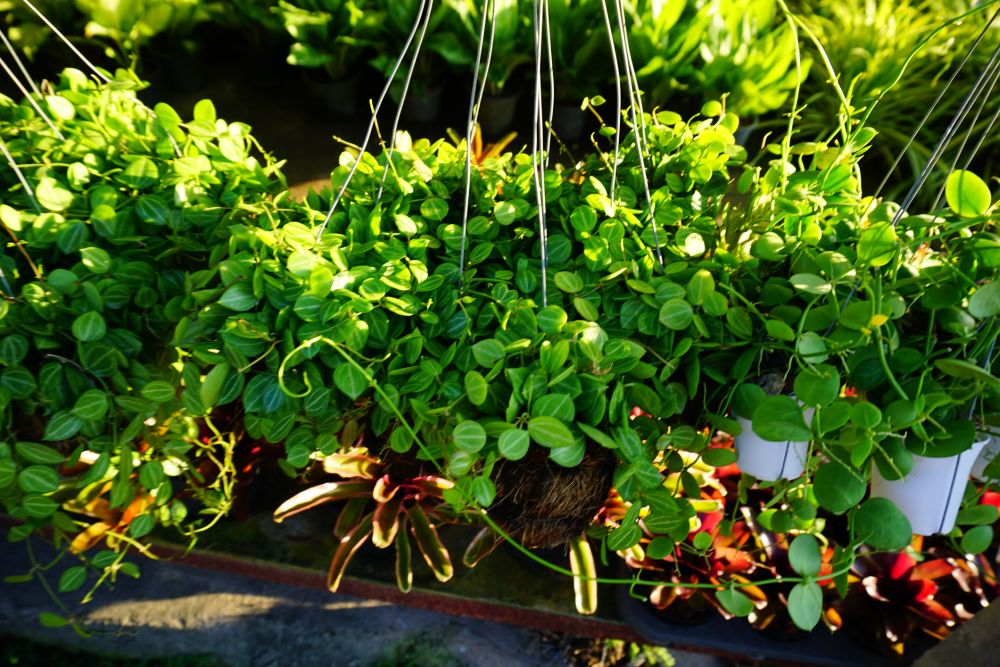 While the string of nickels isn’t prone to any serious issues, the adverse effects of overwatering are barely reversible. Make sure the roots aren’t waterlogged, especially during the winter months. Mealybugs and spider mites also tend to find tropical plants quite habitable. Other common pests include aphids and fungus gnats. It’s best to regularly inspect your string of nickels plant for these pests before the infestation dominates.

How to Grow Graptoveria Succulents