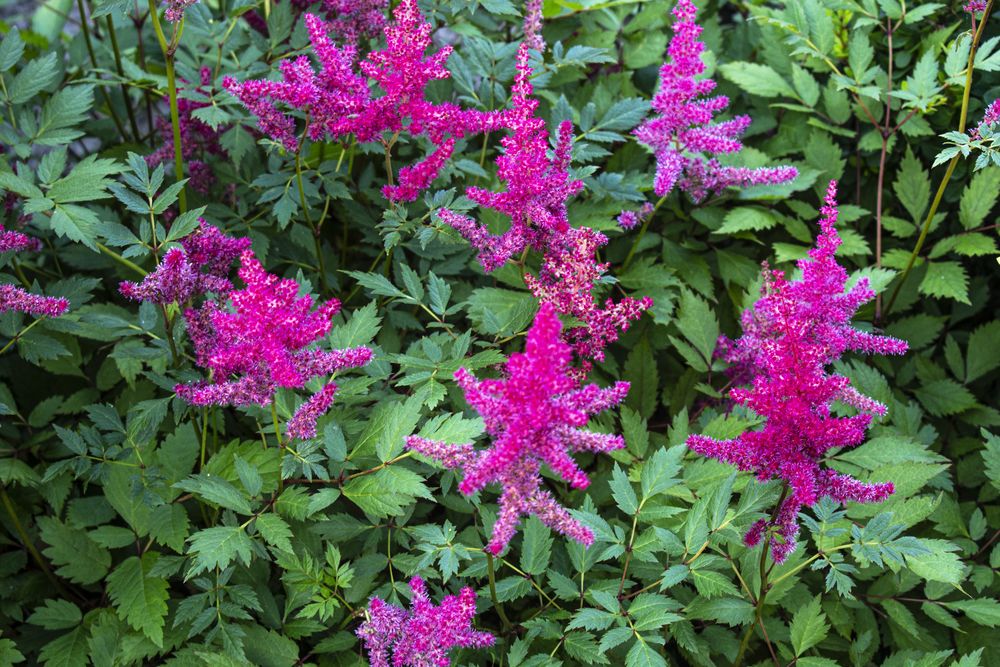 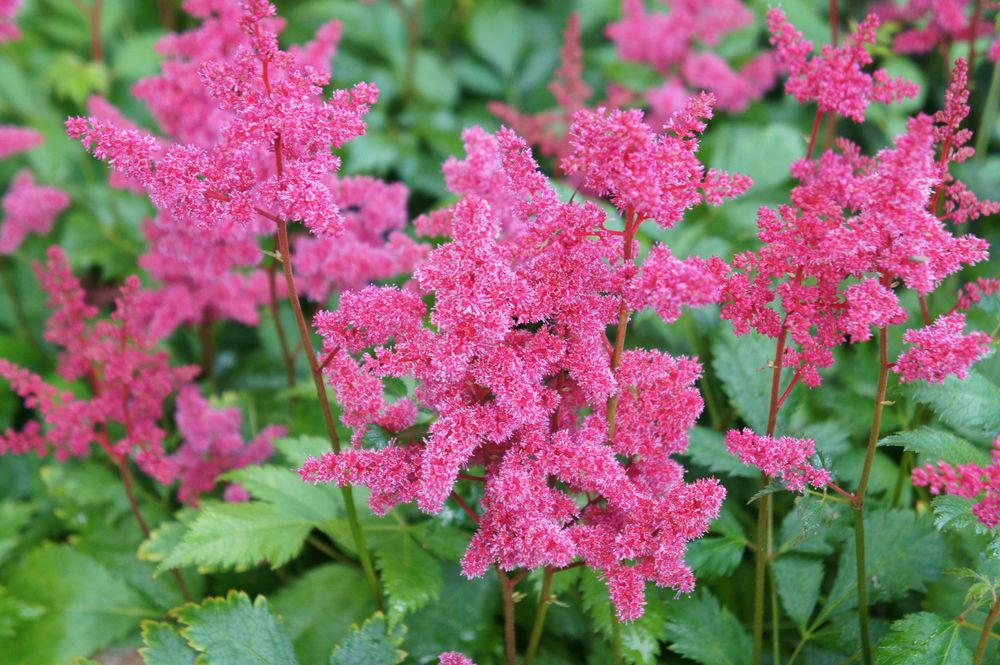 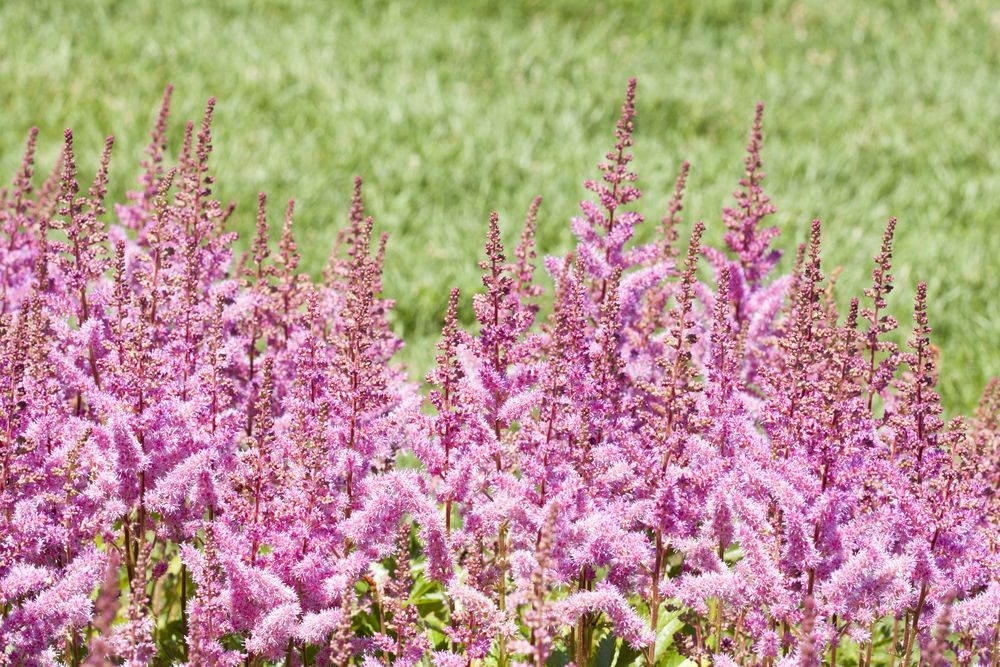 The feathery plumes of astilbe are not the only reason you’d want to grow these decorative plants. The green foliage makes a good backdrop for any other flowering plant long after those feathery plumes have faded and dropped. 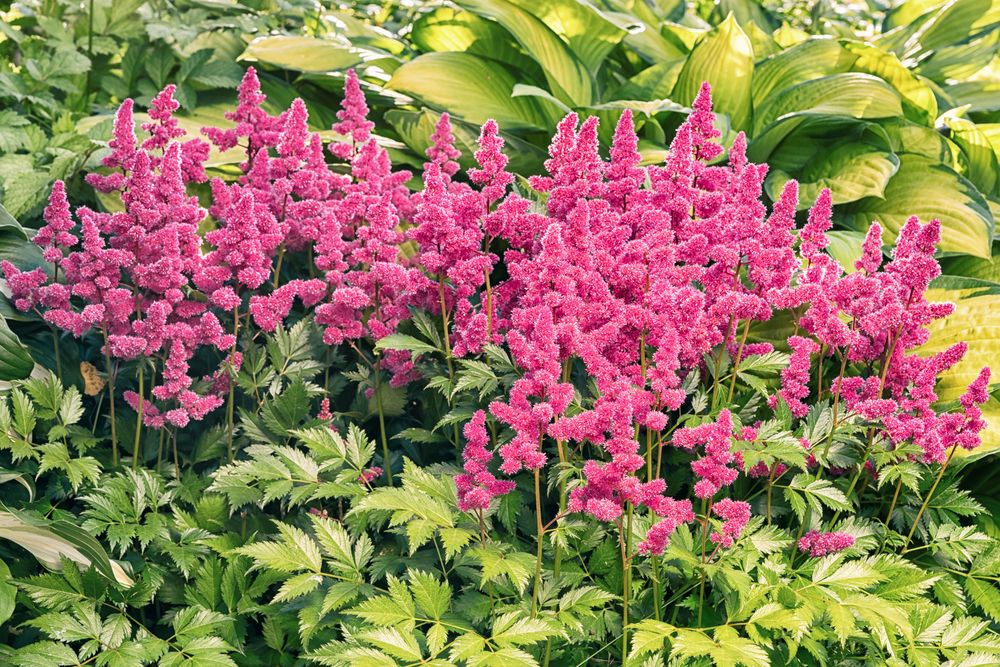 And when you have such unabashedly showy plants with their attention-grabbing flowers, you can’t help but wonder, which variety to start with. Every time you see an astilbe variety growing in a neighbor’s garden, you want to have the same one. It’s just human nature. The blooms across the fence have more vivid colors.

And with over 25 natural species and hundreds of cultivars, the shade corners in the neighboring gardens can be hard to decipher. So to help you start your astilbe corner, we put together a list of the most popular astilbe varieties and cultivars.

Whether you’re trying to fill up a damp and dark corner that nothing seems to grow there, or you want to add some color to your borders, the astilbe Deutschland is a hybrid for all occasions. As a perennial, it starts blooming in the early summer. The average mature plant grows to anything from 18 to 24 inches at the most. And since it loves the shade like most astilbe varieties, you can easily grow it indoors as well as in the outdoors.

The leaves are glossy and green reflecting the light. As for the flowers, they’re pure white and in full bloom give the plant the appearance of snow-covered trees. At night, it glows in the garden under the stars. It stays in bloom from early to mid-summer. You can grow it in zones 4 to 8 and it thrives in partial sun or full shade. If you’re growing more than one plant of this hybrid, space them 18 inches apart and make sure the soil is slightly acidic. The higher the water retention in the soil, the better, so clayish soil will do just fine with this astilbe. If grown as a potted plant, choose a small pot 3.5 inches in diameter and 4 inches deep.

This cultivar is a crossbreed between two Chinensis astilbe varieties. So the blooms are pink lavender plumes. It’s a late bloomer with a higher tolerance for dry soil than most astilbe varieties. This perennial grows to about 28 inches high which is still less than one foot. It’s a good candidate for shade gardens as its leaves turn from green to bronze in the fall.

By the time the flowers finally open, the better half of the summer is over. But the blooms will remain until the end of the summer, so there’s that. When paired with the snow-white Astilbe Deutschland hybrid, you’ll have plumes all summer long.

To make matters easier, the Maggie Daley has the same growing conditions as the Deutschland. It too grows in zones 4 to 8 and prefers partial to full shade. The only difference is it doesn’t need soaked soil at all times the way other astilbe varieties do. But it can grow in clay soil as long as it’s acidic. So one way to grow the two hybrids together is to keep them in pots which makes watering them a lot easier. Maggie Daley hybrids need a small pot measuring 3.5 inches wide and 4 inches deep. If you plant it in the garden, keep it 20 inches away from the nearest astilbe.

If the shade gardens that your neighbors keep are chock full with astilbe species, then you should plant nothing in yours but astilbe hybrids and cultivars. You’ll have your neighbors up all night wondering why your astilbes have different and richer colors than theirs. One cultivar that will puzzle the onlookers is the astilbe Purple Candles. As the name suggests, the blooms are more straight and uniform like candles than the average astilbe plumes. The stalks carrying the blooms are tall and the flowers look like they have been sculpted.

During the bloom season and thanks to tall stalks, the plant can reach 4 feet high. For the rest of the year, it will remain at a modest height of 3 feet tall. It is an early bloomer and the flower buds will open in the early summer and stay in bloom for the next 6 weeks.

It has more or less the same growing conditions as its Chinensis astilbe parents. It thrives in cool zones although zones 7 and 8 are still agreeable to the plant. Wet soil is a prerequisite, so make sure you have clay soil that stays damp all through the spring and summer. And you’ll need medium-size pots to grow this plant. As for garden spacing, it should have at least 24 inches of space to grow and blossom.

Once you start experimenting with astilbe Montgomery, things will get interesting and you’ll start getting envious looks from your neighbors. That’s because the astilbe Montgomery is the kind of hybrid that forces you to pause and stare. A crossbreed of Japonica astilbe varieties, the feathery plumes of this cultivar are dark magenta red. With a background of fern-like lush foliage, you know you have a winner on your hands. Pair it with white astilbe varieties or add some pink and purple hybrids to the mix to create a stunning shade garden.

A late bloomer, the Montgomery flowers open in the second half of summer and stay in bloom until the end of the season. The average plant grows to about 20 inches or it might reach 24 inches in the right conditions. Partial sun or full shade will do nicely with this cultivar.

As for the soil, it can be clay and needs to be moist or even wet throughout the spring and summer. The cooler the zone the better for this hybrid although it can still grow in zone 8 as long as you keep it in full shade. Plant it in a small pot and repot it once every 2 years or let it grow in the garden and space it 18 inches apart from the nearest plant.

Another heirloom cultivar with a descriptive name that tells you all you need to know about this hybrid. The Astilbe Younique Salmon has dense and bushy plumes the color of salmon. And while it’s less neat than the Purple Candles above, this cultivar is by no means less attractive.

One feature I liked about this hybrid is that it produces more flowers per plant than any other astilbe variety I know of. Just imagine people looking at your garden and wondering how you could pull off such astilbe with all these light pink plumes.

Another reason you should consider the Astilbe Younique Salmon in your shade garden is its high tolerance to heat, drought, and even cold. You can grow it easily in zone 3 outdoors as well as indoors. And did I mention that it blooms earlier than any other astilbe? Around late spring, the buds will open and stay in bloom until mid-summer.

And for all its abundance of blooms, this is a compact cultivar by astilbe standards. It doesn’t grow an inch above 16 inches and sometimes it will stay around 12 inches throughout its life. As a patented cultivar, it will cost you a pretty penny to get your hands on the seeds but it’s worth every penny. Plant it in a small pot or space it 18 inches from the nearest plant in the garden.

When you want a shock of bright red in your garden, the astilbe Red Sentinel is right there to comply. A hybrid of Japonica astilbe varieties, its plumes are vibrant red with loud colors that would make you blink. The scarlet blooms grow on top of mahogany red stalks far from the dark green foliage below. The plant has an untidy look about it whether it’s in the stems, foliage, or plumes. But it’s an endearing look and with that shocking red color, you’ll forgive it everything even when it encroaches on the personal space of the neighboring astilbes.

The average Red Sentinel grows to about 24 inches tall including the tall plumes that sway with the slightest summer breeze. It doesn’t have a long blooming season and will open in the late spring and fade by the early summer. It’s a brief moment in time but the vivid scarlet plumes will stay imprinted on your brain for the rest of the year.

It favors full shade over the partial sun and the soil needs to be clay and wet in the spring and summer. Like many other astilbe varieties and cultivars, it too grows outdoors in zones 4 to 8. If you plant it indoors, then you can grow it in any microclimate or zone as long as you keep the soil wet and don’t allow direct sunlight exposure. Small pots will do for this compact plant. As for spacing in the garden, it should be 18 inches away from the nearest plant.

This variety is a great ground cover thanks to its compact size and spread. It will not grow above 10 inches no matter how much fertilizer you feed it. But don’t let its low stature deceive you. Once this astilbe blooms, you’ll forget all about its size. The lilac plumes are some of the most exquisite astilbes you’ll grow.

Growing out of short talks, the plumes open in every other direction and create a lush and cushy ground cover. The only drawback is the short bloom season. The flowers open in mid-summer and by the end of the summer, they’re gone. But they leave behind dense foliage of dark green leaves. So it’s still worth the time and work you put into growing it.

And it’s not that much work either. The astilbe Chinensis doesn’t require any more care or attention than its taller counterparts. If anything, it has low demands in terms of shade and water. You can grow it in full sun and it will not complain or stop flowering. As for watering, you can treat it just like any other plant in the garden. If the topsoil dries out, the plant will not show signs of stress.

This cultivar is a favorite of mine. Not just because I like peaches, but also because of the multi-colored plumes. Unlike other astilbe cultivars we covered here, the plumes of the Peach Blossom have different shades of peach, pink, and white. The airy plumes are not as dense as other hybrids, but they’re ready to dance with the slightest breeze.

They’re also magnets for pollinators such as bees and butterflies. You can pair this hybrid with other shade-loving plants such as Hosta, Lobelia, Brunnera, and Ligularia. If you plant it as a border plant, the lacy and fern-like leaves give off a vibrant and cheerful vibe.

The average height of the mature Peach Blossom hybrid is 20 inches. It has a good tolerance to dry soil so you don’t have to worry about keeping the soil damp. It’s an early bloomer and stays in bloom from the early summer until the end of summer. That’s 3 months of dreamy colors to keep your shade garden bustling with life all summer. Space the astilbes 18 inches apart in the garden or as border plants.

Astilbe Care – How To Grow And Care For Astilbes

Astilbe Growing Problems And How To Solve Them