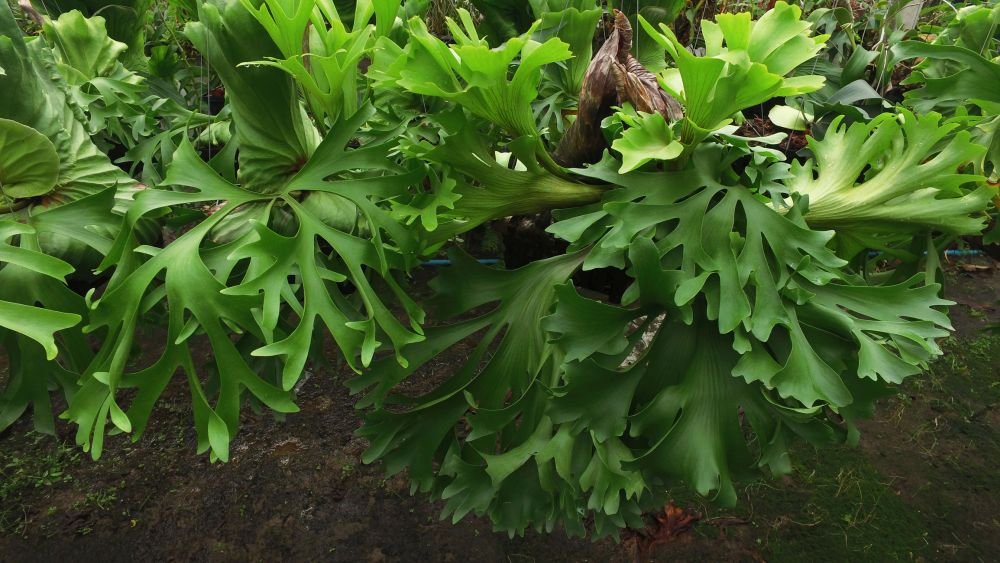 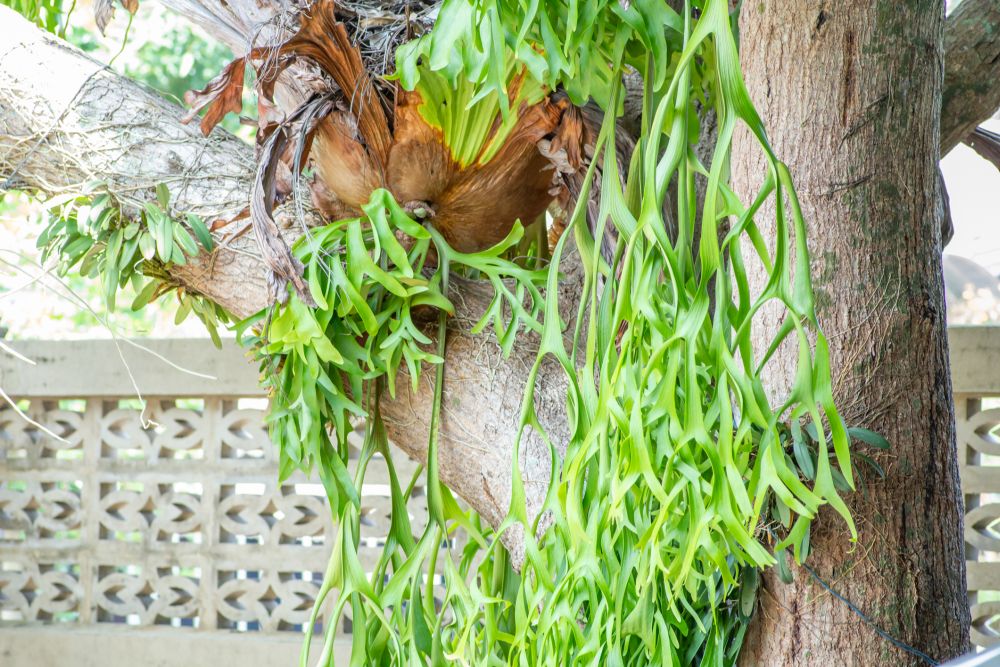 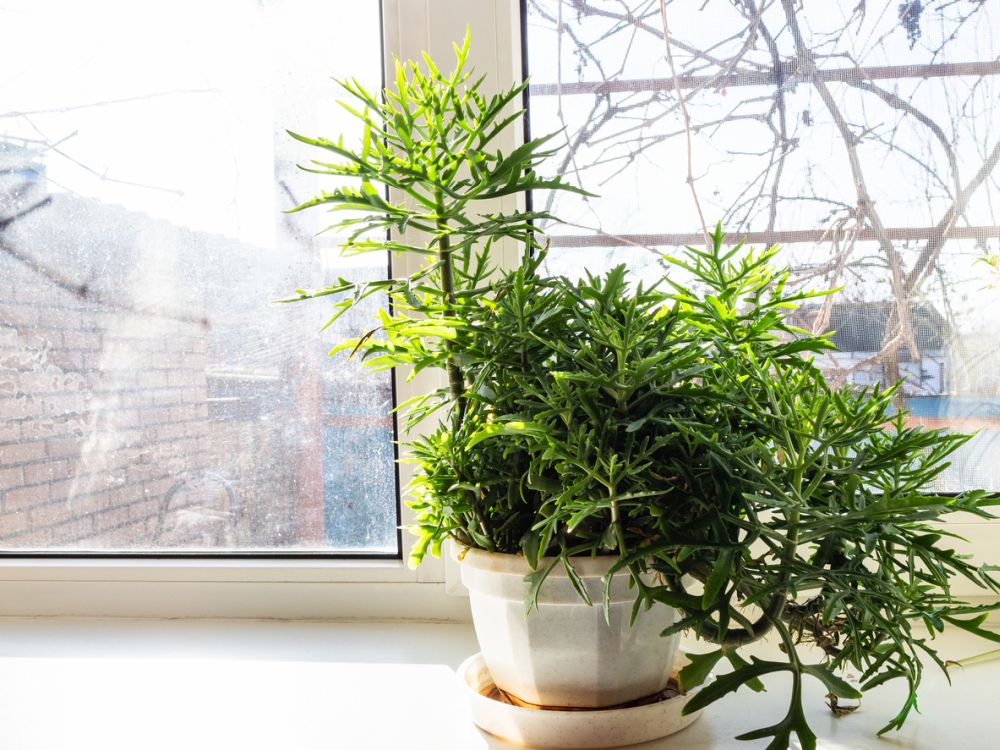 Houseplants mounted on the wall are such a masterpiece. If you like this model much better than using a hanging basket, then you probably want to start off with the Staghorn Fern. Staghorn Ferns resemble antlers of a male elk, and their adaptations are kind of like those of air plants.

That ostensibly explains why the name sounds somewhat unusual. This tropical epiphyte is a snappy charmer hence why we took time to gather a few cues about the exact caring requirements it needs to hold out against adverse conditions.

All About the Staghorn Fern’s Anatomy

The Staghorn Fern is a tropical houseplant and a mountable species in the Platycerium genus. If you have a greenhouse somewhere in the backyard or, say, an enclosed porch, this plant would stand tall as a glamorous masterpiece.

There are about 18 popular species in the Platycerium genus, all native to the tropical regions of Australia, New Guinea, Africa, Philippines, and Southeast Asia—except for Platycerium andinum, which hails from the tropical and temperate surroundings of South America.

What’s utterly fascinating about the Staghorn Fern is it’s natively accustomed to growing deep in the wild. It’s no wonder why, same as air plants, this tropical charmer has the adaptation to attach itself on trunks.

And due to its epiphyte attributes, the Fern is mostly grown as a hanging plant—you can mount it on the wall so long as the lighting conditions are pleasing. Even though it’s possible to grow it inside a container, the Staghorn Fern glows a lot better on a wall.

Unlike most other houseplants, which reproduce using flowers and seeds, ferns release spores that germinate into mature plants. There are two distinct types of leaves, but both are called fronds. And the most popular ones are the “antler” fronds which are split into two branches and sprout from the middle of the plant.

Spores develop on the underside of the leaves and have a brownish tone on them. When grooming your Staghorn Fern, don’t get tempted to get rid of the spores. The other type is known as the sterile shield frond. Shield fronds resemble plates and spread wide right from the base of the plant.

They protect the roots from rotting and are responsible for nutrients intake. During the life cycle of your Staghorn Fern, it’s pretty normal for the fronds to start out as green, then turn brown and eventually dry off entirely. That’s not to suggest your Staghorn Fern is wilting, so you don’t want to pluck off the shield fronds.

How to Care for the Staghorn Fern

Staghorn Ferns prefer to grow under bright but filtered light. Mount it somewhere it can get about 4-6 hours of bright light from the sun each day. The leaves need protection from intense heat. Being a tropical plant, it would be hard for it to withstand frosting conditions. So, you’ll need to keep the room temperature from falling below 12 degrees Celsius.

You’ll need to water your Staghorn Fern quite often, especially during the warmer months. Being native to the tropical regions of Southeast Asia, the Philippines, and Africa, it’s clear-cut that this houseplant prefers to be grown under high humidity levels. But that’s not to mean it should sit in wet soil for too long.

Place it somewhere with enough air circulation but not close to an air conditioner. You can water your Staghorn Fern once every week during summer, then cut back the frequency to 10 days when winter closes in. To make the watering exercise a whole lot easier, remove the houseplant from its mount, then soak it in water for about 20 minutes.

During summer and spring, you want to feed it with soluble fertilizer that’s rich in nitrogen after every three watering sessions. Or better still, you can depend on organic kitchen waste such as banana peels to give your Staghorn Fern the essential nutrients it needs throughout the year.

How to Propagate the Staghorn Fern

One of the primary ways to propagate the Staghorn Fern is using spores. Spores are seeds tucked on the underside of the leaves. If you want to use this method, make sure to:

But since this asexual way of reproduction is a bit slow to show solid results, it’s far better to propagate using the division method. Same as the spores, you need to place small pups dissected through the division method under a warm environment.

While the Staghorn Fern is a tropical plant with low chances of getting attacked by common pests and diseases that often ruin the vigor of most other houseplants, failing to stick to the material requirements needed to make it look graceful all year long will ultimately hurt its appearance.

There are chances it might suffer from the dreadful Rhizoctonia fungal infection or get invaded by snails and slugs when neglected for too long. Mealybugs too like to prey on this tropical beauty. In the event where your Staghorn Fern is gravely invaded by aphids and scale insects, you can make the best use of a soluble insecticide if natural remedies seem not to work.

And in a bid to mitigate the fungal infection, I bet you’ll find this guide handy when treating the Rhizoctonia Blight condition on your Staghorn Ferns in case they get infected with the disease. Another common condition that causes adverse effects on the appearance of your Staghorn Fern is lack of access to enough light.

Even though this tropical houseplant thrives far better under partial shade, be careful not to overdo it. Mounting this tropical epiphyte somewhere with low light will cause it to grow at a slow pace since the chlorophyll pigments will take longer to respond. Make sure to adjust the mount in a position in which your Staghorn Fern can have access to enough but fairly filtered light for about 4-6 hours each day.

Effects of overwatering also tend to be unforgiving for many Fern species in the Platycerium genus. Depending on the overall size and texture of the leaves, remember to only water it once or twice every week during warmer months, then cut back the intervals when it’s winter. On the other hand, if the leaves begin to turn droopy, that could be a sign of underwatering.