Now that spring has finally started to warm out backyard, we’re looking at the large space we’re fortunate enough to have there and wondering whether we might be better to use a portion of it to create another little comfortable retreat spots there for our family to use in the summer. After all, there’s nothing wrong with having more comfortable shady spots for friends and guests to bond in while they get some fresh air together! That’s why we’ve had our eyes peeled recently for DIY gazebo plans and tutorials. Sure, we could buy one store made, but we just get so much more satisfaction out of doing it ourselves! 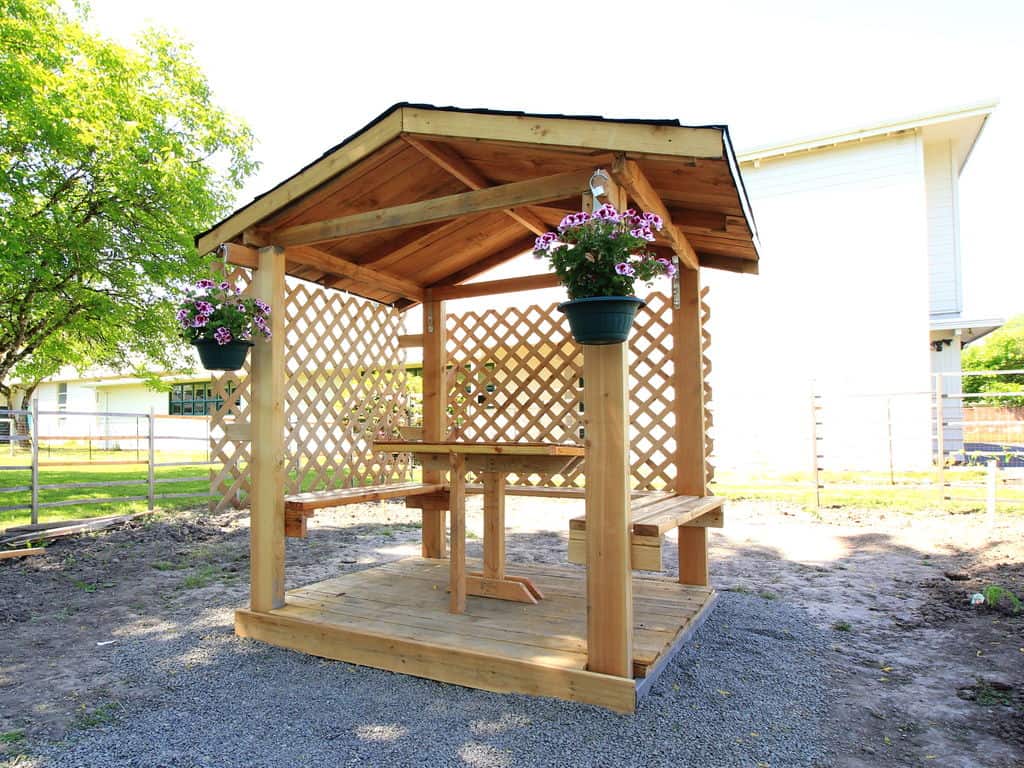 If you’re going to build yourself an extra little backyard structure, would you prefer to make sure that it’s still quite open to the air and sunshine as people sit there to enjoy it? Then we’d definitely suggest taking a look at how Instructables made this lovely floating bench and table gazebo from wood, using wooden garden trellises to make a sort of screen on two sides, leaving the other two nice and open. 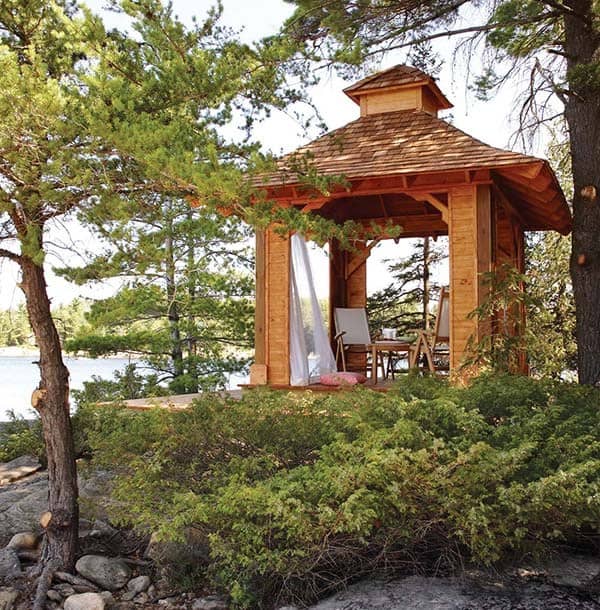 Are you actually quite experienced indeed with woodwork and you can’t help wondering whether creating something with a lot of style that’s a little more of a challenge might be your best bet, since you’re not intimidated by the concept of building something from scratch? Well, particularly if you’re building on ground that might be uneven, we’d absolutely suggest taking a look at how The Classic Archives made this raised floor gazebo that’s fully shingled to prevent leaks when it rains. 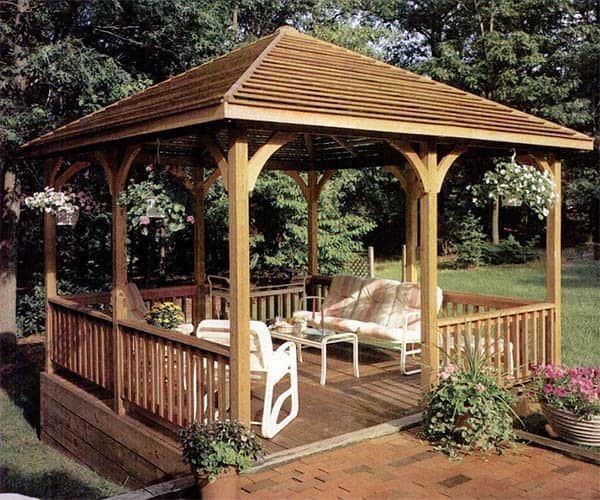 Maybe the only spot in your yard that will really suit a gazebo is right off the edge of your already existing raised deck or patio so you need some help on making the floor levels of the two structures match? Then we’re pretty sure Popular Mechanics has the perfect gazebo plans for you. They show you in detail how to create a platform levelling the gazebo with a finished deck. 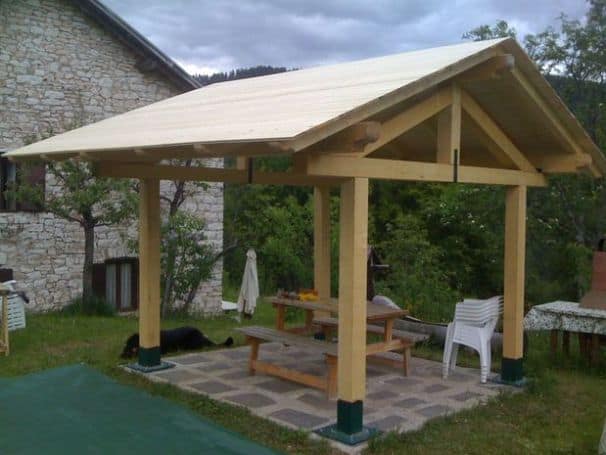 Have you decided that you would, in fact, love to find some pre-darwn gazebo plans that you can work from for guidance rather than winging it and making up a structure of your own, but you want to make sure that it’s a plan someone else has already tried out themselves and verified through experience? Then we think you’ll really appreciate the way this particular gazebo design outlined on Instructables was created using Google Sketchup during the creator’s actual creation process of their very own successful gazebo. 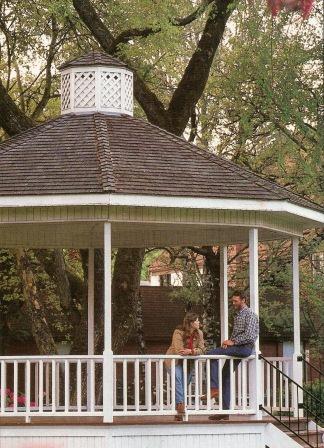 Perhaps you’re actually quite intent on building something a little bigger and more classic looking than some of the smaller structures we’ve shown you so far? Well, we certainly can’t say that we blame you for enjoying the look or something a little more grand! That’s why we couldn’t help including these plans from Mother Earth News that teach you how to make a park-style sanctuary gazebo. 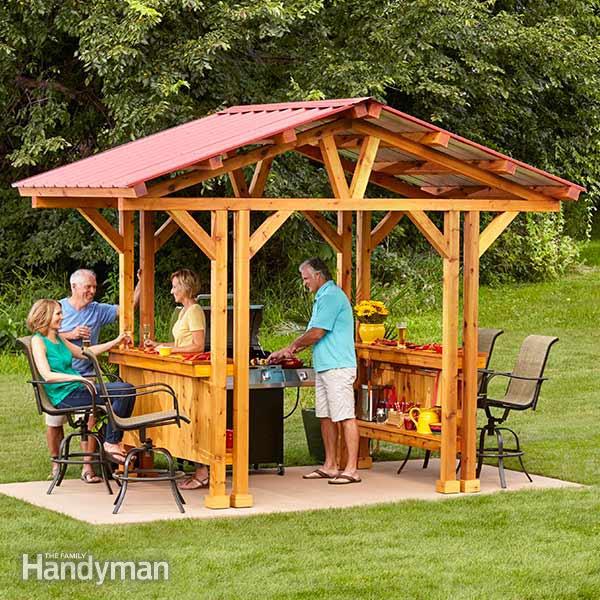 If you’re going to put in all of the time and hard work it takes to create your very own backyard gazebo from scratch, would you actually rather create a slightly more diverse space that can be used for things other than just sitting in the sunshine (as wonderful an activity as that is)? Then we think maybe you’d get along a little better with something like this specifically designed grilling gazebo outlined in detail on Family Handyman! 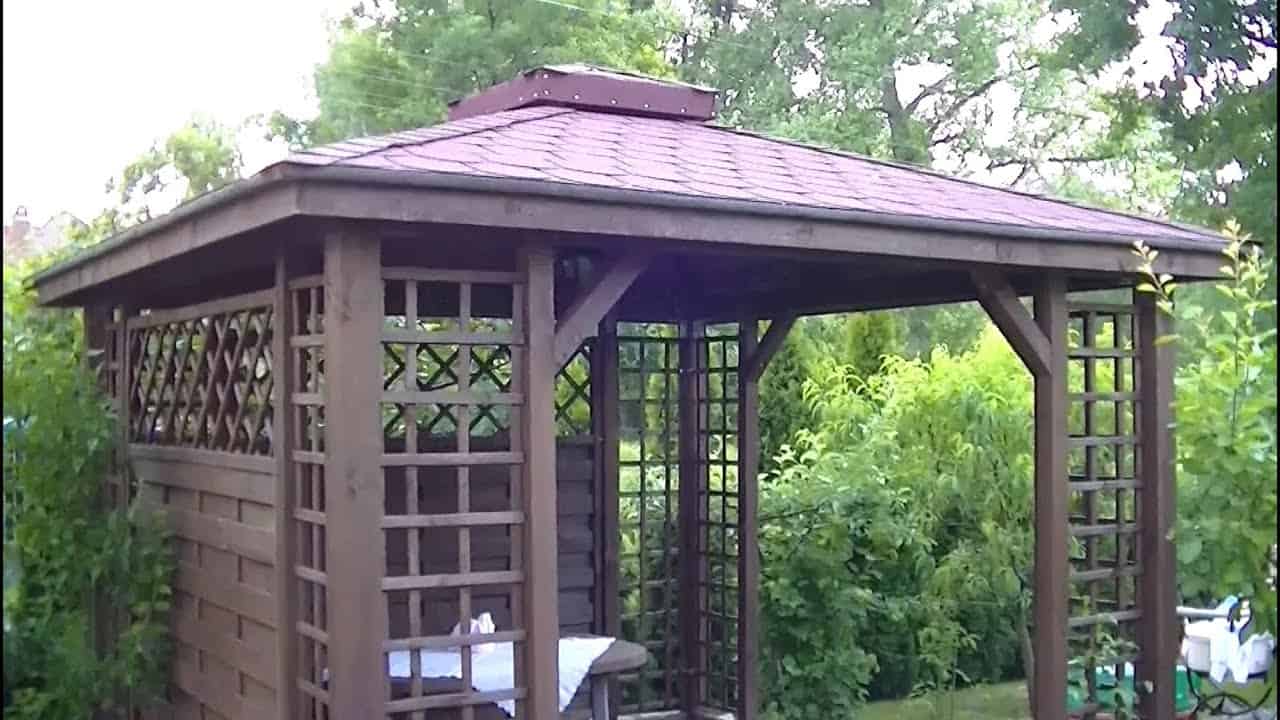 Just in case we really caught your attention when we started talking about gazebos with one closed side and one open but you’re like something a little more permanent and solid looking than the garden trellis idea, here’s another tutorial from Igor30 for your consideration! Their plans map out the process of creating a half enclosed gazebo that’s nice for sitting against on one side.

8. Open top pergola with a fire pit and swing seats 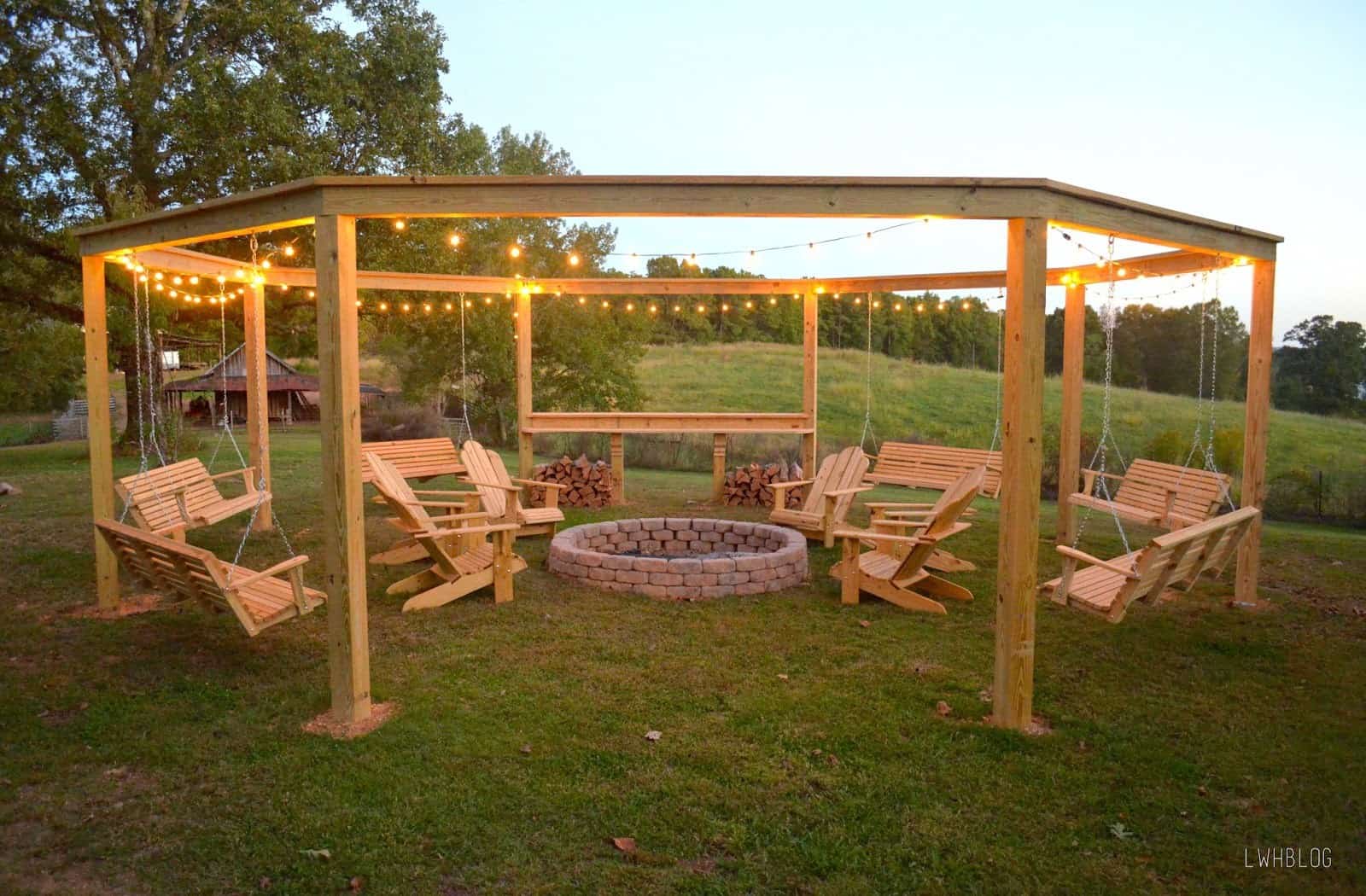 Are you still interested in the whole idea of a nice outdoor structure at large but you think you might prefer an open air pergola rather than a fully shaded gazebo with a roof on it? In that case, we’d absolutely suggest taking a look at how Remodelaholic made this pergola that provides the ultimate outdoor fire pit experience thanks to its feature of several wooden swing seats! 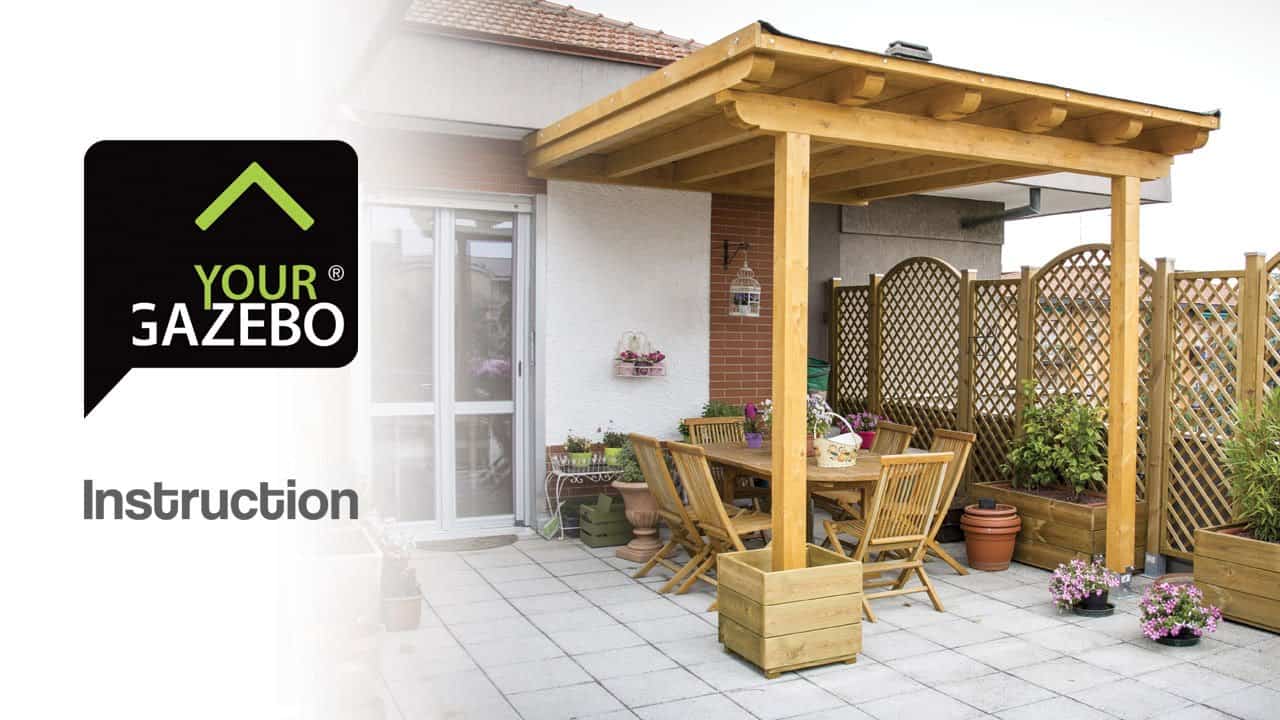 Perhaps you’d rather build a very simple gazebo structure over your patio, where your family often eats dinner outside during the summer, but you’re still a beginner at wood working and you’re not sure a peaked or angled roof will really suit your skills or the space itself? Then we’d suggest taking a look at this flat roof style gazebo extension featured in more detail on Your Gazebo. 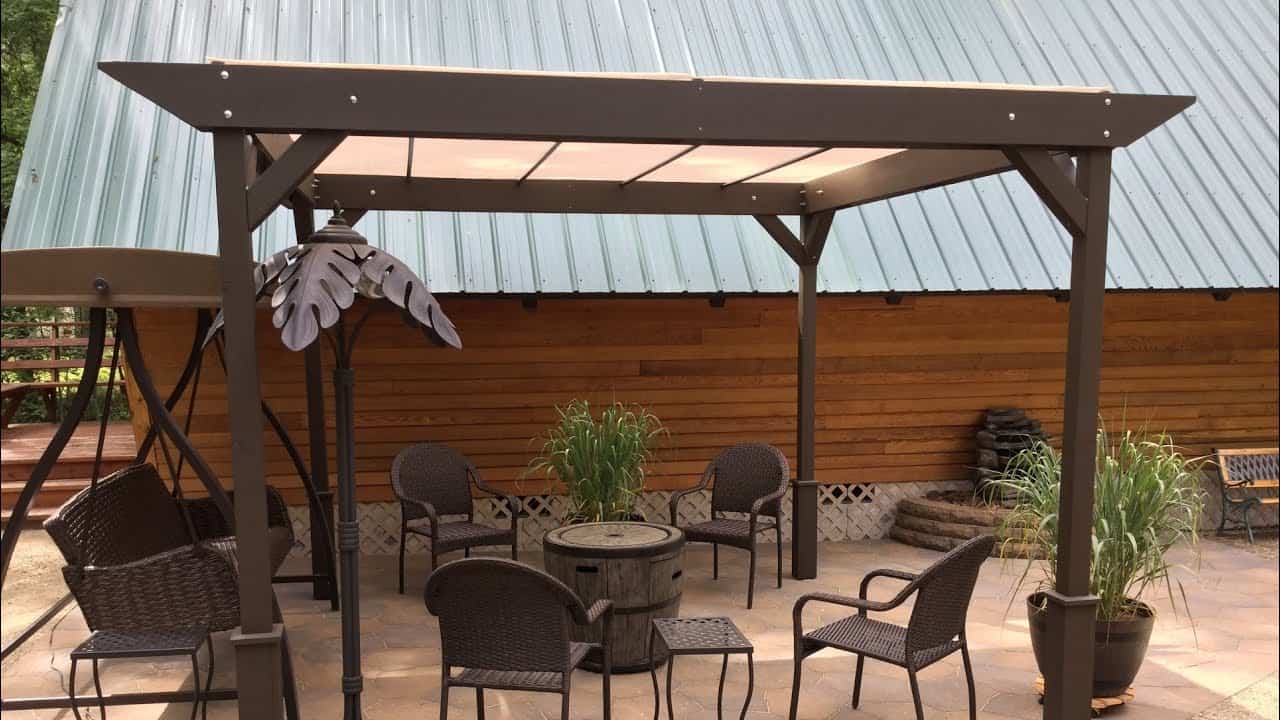 What if you’re scrolling through our list and thinking about how you enjoy the flat roofed style and you want any gazebo space you make to be covered in case of rain, but you’re also intent on letting as much sun in as possible at all times? Then we think you simply must take a look at the way Davidgg22 made a roof that actually lets a bit of a sunny glow in at all times thanks to the way it’s made of sun shades instead of solid wood like the rest of the structure. 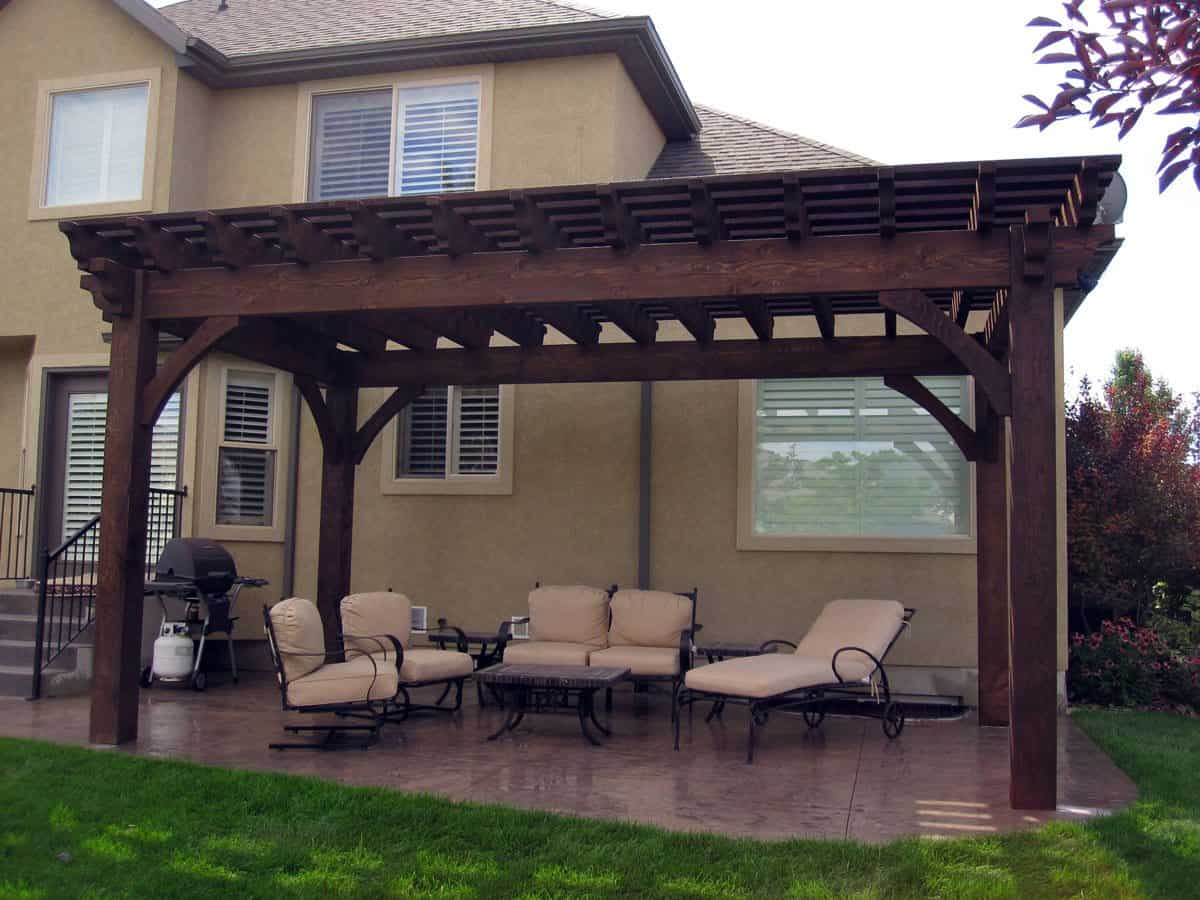 Is protecting your outdoor seating against rain while also getting a bit of shade in the summer your main priority, and you don’t mind how simple the finished product looks so long as it’s neat? In that case, you might just find exactly what you’re looking for on Western Timber Frame! They show you how to make a simple standing gazebo in a timber frame style. 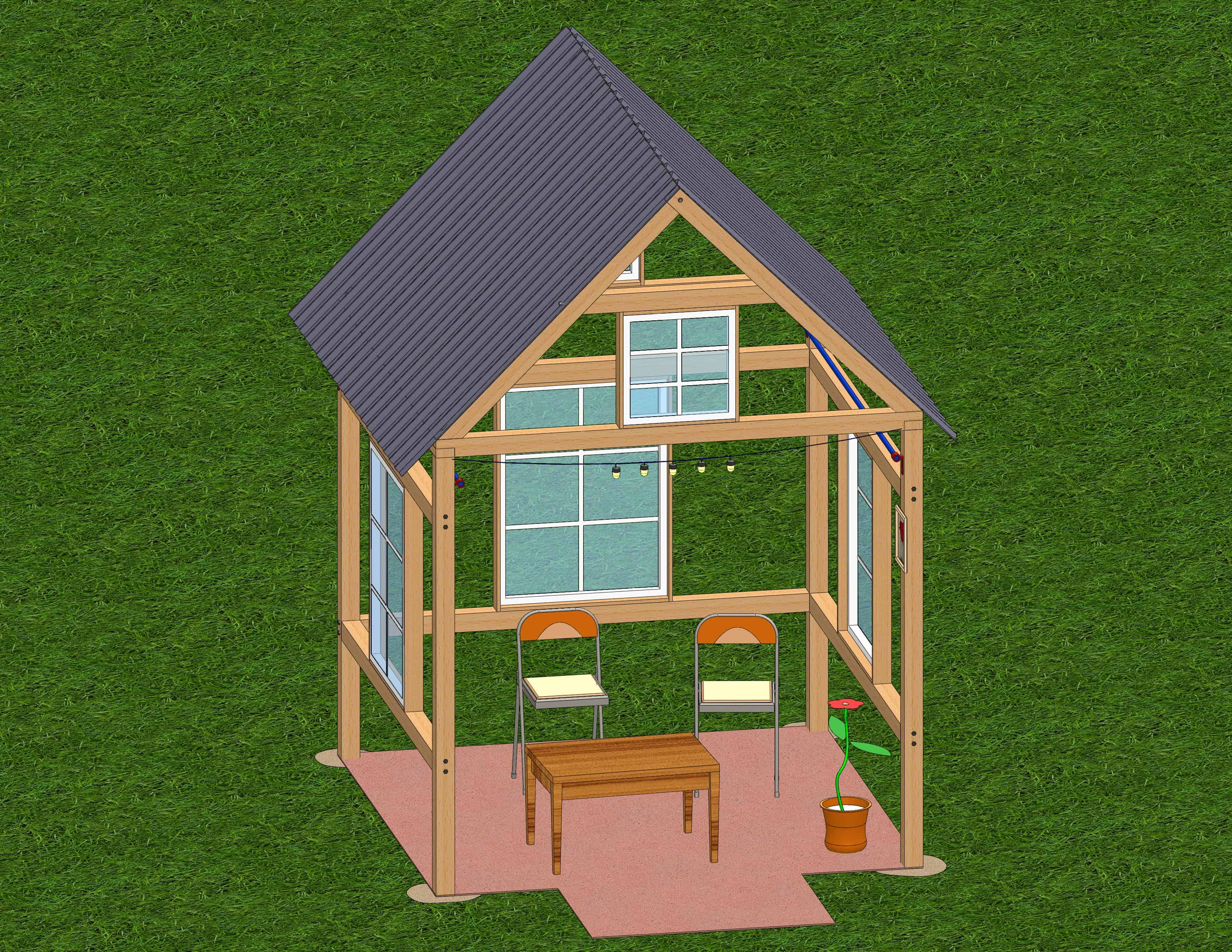 Are you still thinking about how much you adore the idea of having an open air gazebo with no walls and just a solid roof, but you still want it to have some kind of unique character, since it will be such a visual feature in your backyard space? Then we’d absolutely encourage you to take a look at the way WikiHow outlines the process for building an open-walled gazebo with windows that looks like a little house. 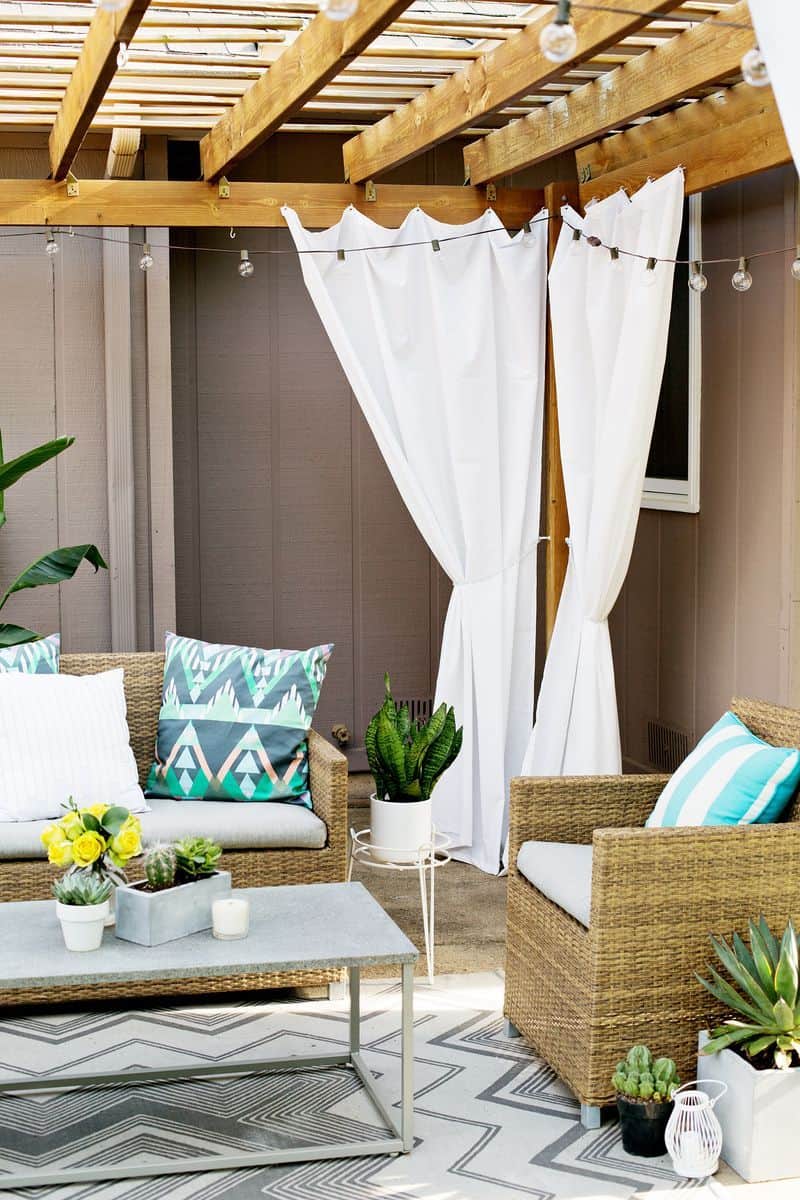 Maybe you’re feeling quite intrigued indeed by the idea of building a simple, open-aired pergola that will let lots of warmth and fresh air in, but you’re still wondering whether there’s an option to close it off against a chilly breeze, too much intense sunlight, or even just the gaze of nosy neighbours? Then we think you’ll really appreciate the way A Beautiful Mess outlines the process of finishing your pergola off with some nice curtains that can be drawn closed or pushed back whenever you please! 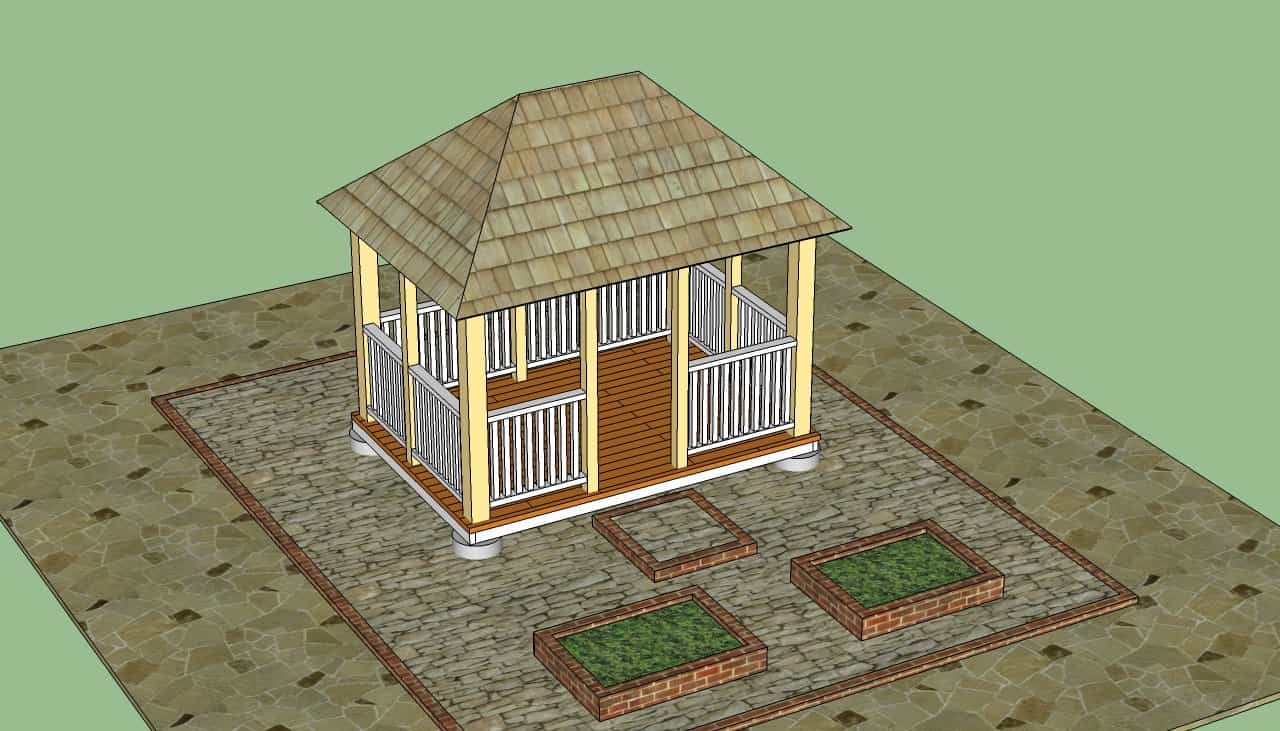 In your space, are you picturing just a standard, rectangularly shaped gazebo with a simple roof and a fence all around the perimeter, but you want to build it yourself, preferably as “from scratch” as possible? In that case, we have a feeling this drawn plan and explanation featured on How To Specialist might be precisely the kind of resource you’re looking for. 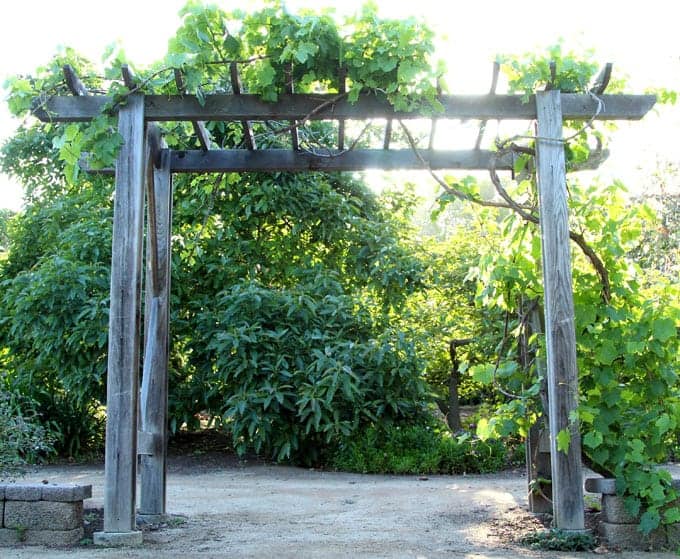 What if you’re intent on having some kind of lovely wooden backyard feature this spring and summer but your space is very limited, or you’re a real DIY beginner who needs to stick to something very simple but satisfying? In that case, we’d definitely suggest taking a look at how A Piece of Rainbow built this small grape arbour style pergola that looks whimsical and old fashioned.

Do you know another home crafter and DIY enthusiast who has been talking about making their very own gazebo for a long time now but who could also use a little bit of guidance? Share this post with them so they have all kinds of inspiration and information to work with!

40 DIY Pergolas You Can Create For Your Own Backyard

Best Gazebo For Patio And Garden Reviews: Enjoy The Outdoors In Comfort

Lean-To Shed 101: Everything You Need to Know