With the Fourth of July fast on it’s way, it’s time to start thinking about the party or barbecue you’re hosting! Even if you’re attending at a friend’s house rather than hosting, this is a great time to start thinking about what kinds of dishes you might take as well. Whenever we volunteer to make a dish for something, we like making desserts best because we’re huge sweet lovers and we love making eye catching foods that follow a theme. That’s why we’ve been scouring the Internet for awesome Fourth of July desserts all week! 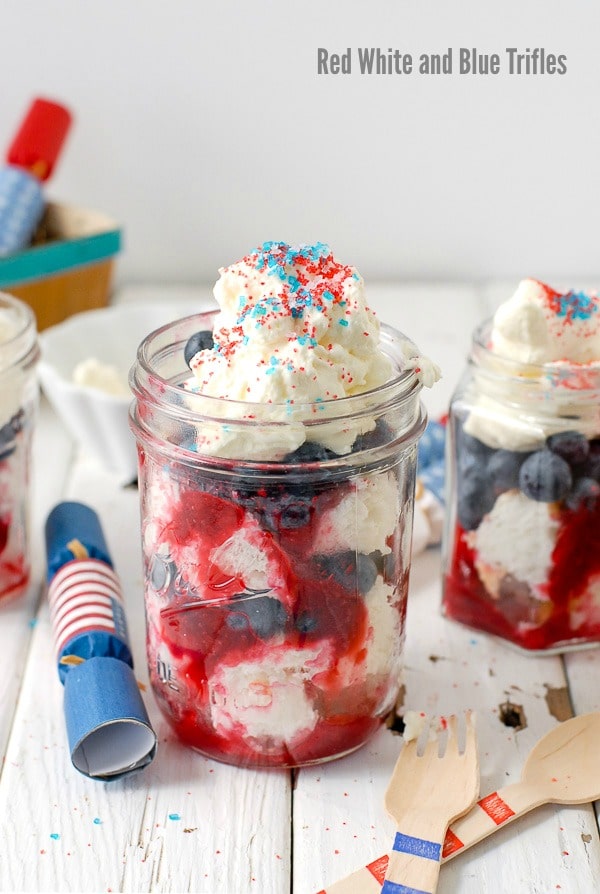 If you’ve never tried a simple fruit or berry trifle before then we’re very sorry indeed to tell you that you’ve been missing out! We’re huge fans of this delicious red, white, and blue mason jar trifles made by Boulder Locavore that are easy to put together and simple to serve on the go thanks to the individual size of the jars. The blueberries add some blue, the strawberry sauce adds some rad, and the whipped cream takes care of the white! 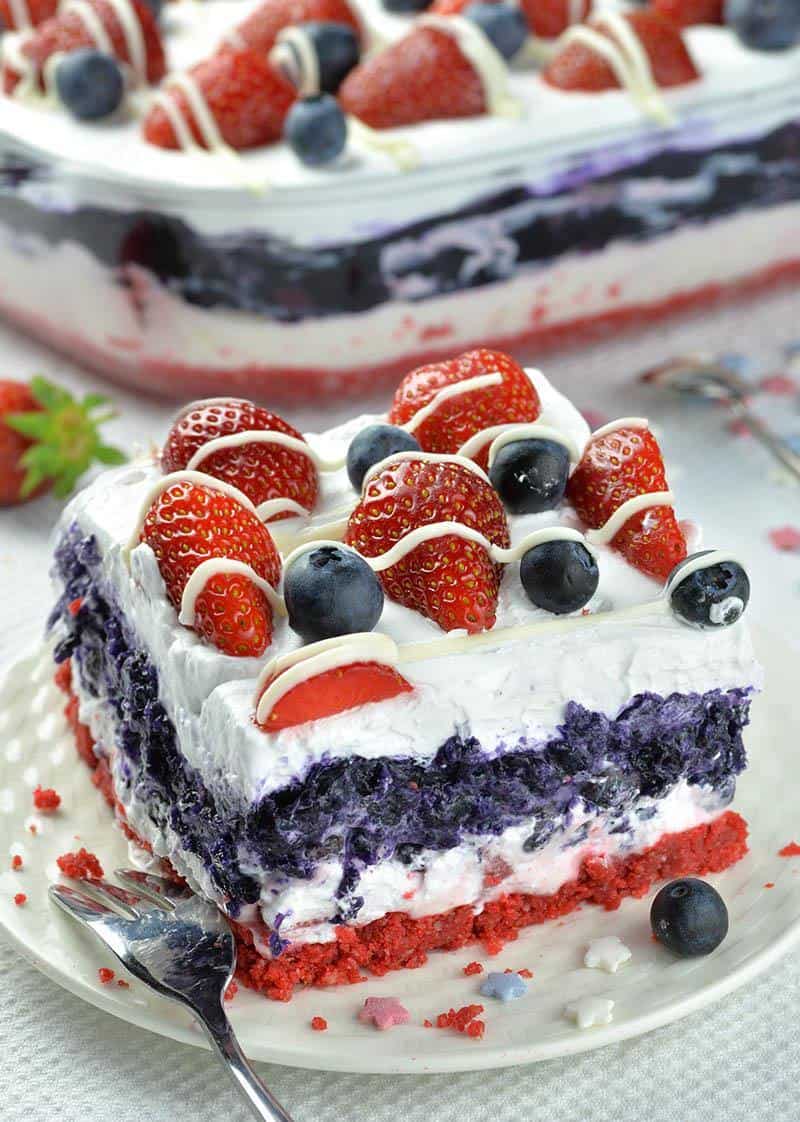 If you’re going to make something that’s themed red, white, and blue for the Fourth of July, would you actually prefer to make something really unique and a little novelty that your friends have probably never tried before? Then we have a feeling you’ll get a huge kick out of the way OMG Chocolate Desserts made a dessert lasagna! The cake and cream layers are red, white, and blue while strawberries and blueberries add a themed garnish too. 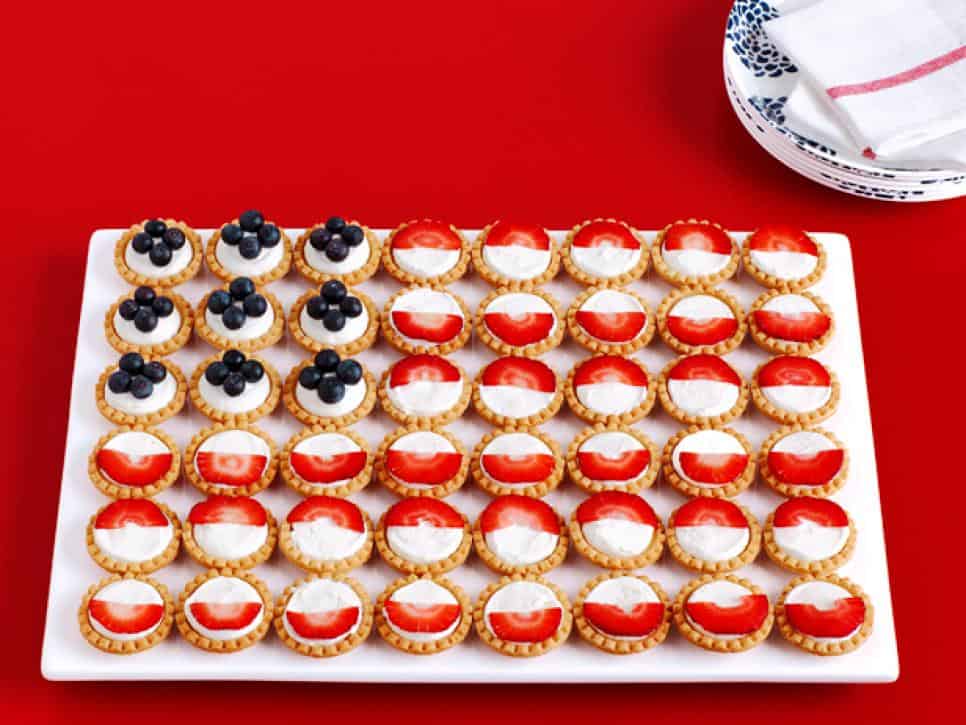 Are you really enjoying this idea of using blue and red berries to help theme desserts after the American flag for the Fourth of July but you just haven’t quite seen the idea that’s grabbed your whole attention yet? In that case, we’d definitely suggest taking a look at how Food Network made this fantastic flag on a plate from strawberry and blueberry mini tarts! 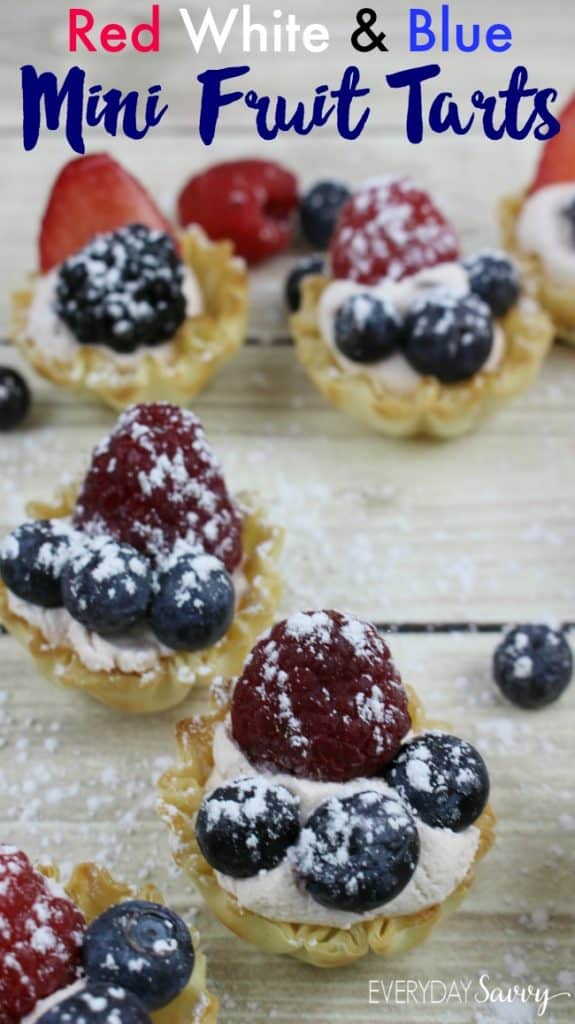 Were you pretty darn intrigued indeed when we started talking about making mini fruit tarts but you’re not sure you’re invested enough in presentation to arrange them like a flag according to which fruit they feature? Then we have a feeling you might get along a little better with something like these red, white, and blue mini fruit tarts from Everyday Savvy that feature blueberries and raspberries together on each one, with whipped cream and powdered sugar to bring some white into the mix. 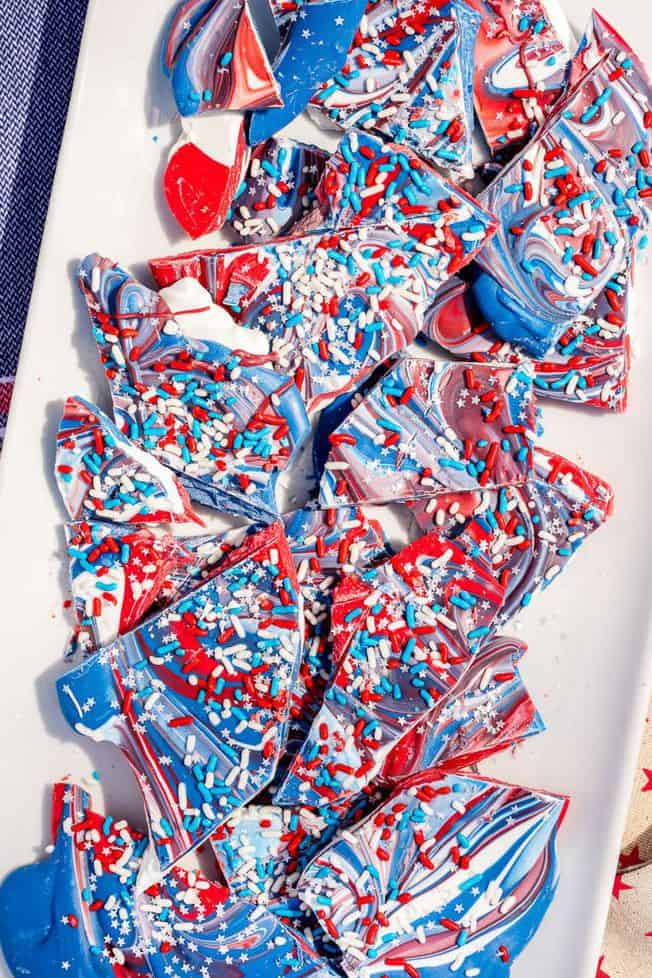 Just like the trifles we mentioned before, if you’ve never tried making your very own homemade chocolate bark, then you’re missing out once more! Besides the fact that it’s delicious, it’s also a total blast to make because you get to swirl the different colours of chocolate in such a way that they look marbled but still distinct, and then you get to decorate it with sprinkles however you please! Take a look at this red, white, and blue “freedom” bark from Delish. 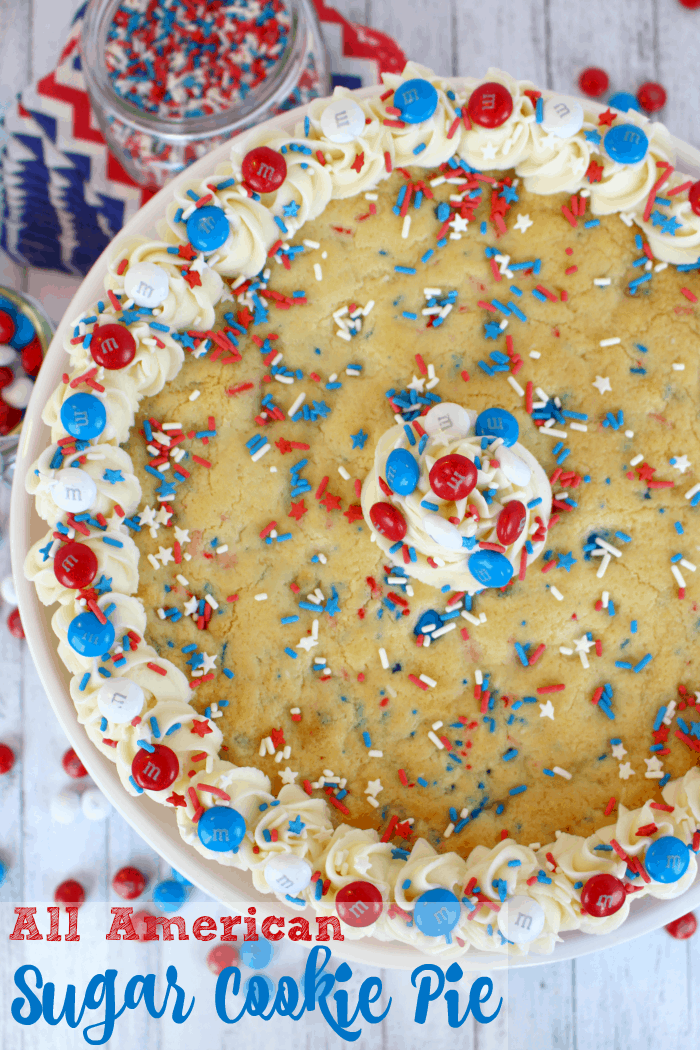 Did we really catch your attention when we started talking about very unique dessert concepts but the Fourth of July lasagna just didn’t quite hit home for you? In that case, we’d definitely suggest taking a look at how Delightful-E Made created a delicious iced and sprinkled pie that’s made and tastes just like a giant sugar cookie! Red, white, and blue M&Ms really drive the colour scheme home. 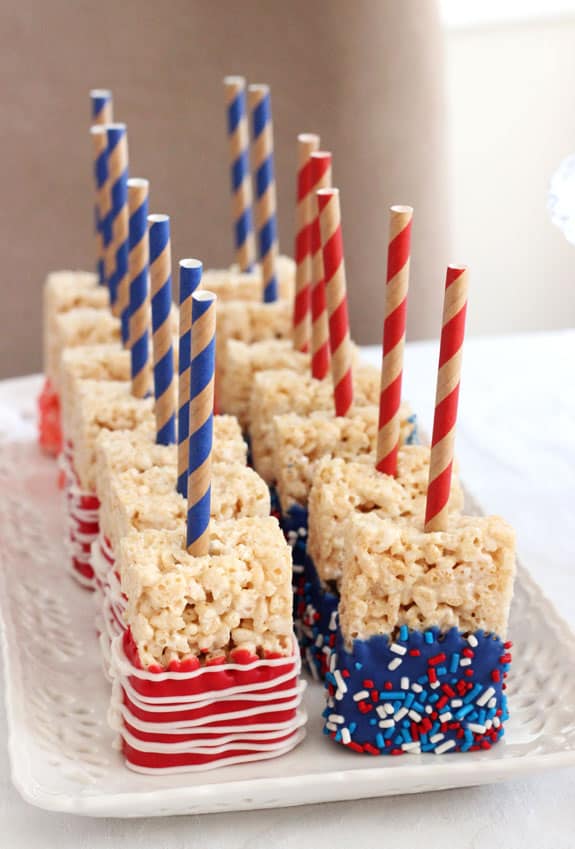 Perhaps the party you’re making treats for is actually a BBQ where you know the kids will be running around and people will want to mostly socialize? Then we think you’d probably be best to make something that’s easy to eat on the go while your guests walk around! We love the way Life, Love, and Sugar made these red, white, and blue iced Rice Krispie squares on sticks to make them like individual serving pops. 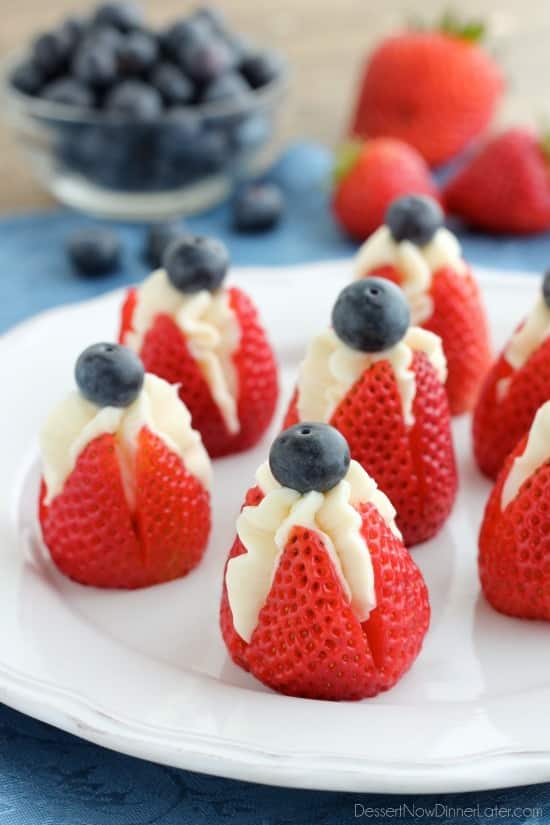 Are you intent on making a Fourth of July themed dessert that’s still sweet and delicious but you’re also interested in a slightly healthier snack than some of what you’ve seen so far? Well, if you’ve ever been a fan of cheesecake, then we think you’ll really appreciate the way Dessert Now, Dinner Later split strawberries, filled the middles with delicious homemade cheesecake filling, and topped each one with a blueberry. It’s red, white, and blue but healthier! 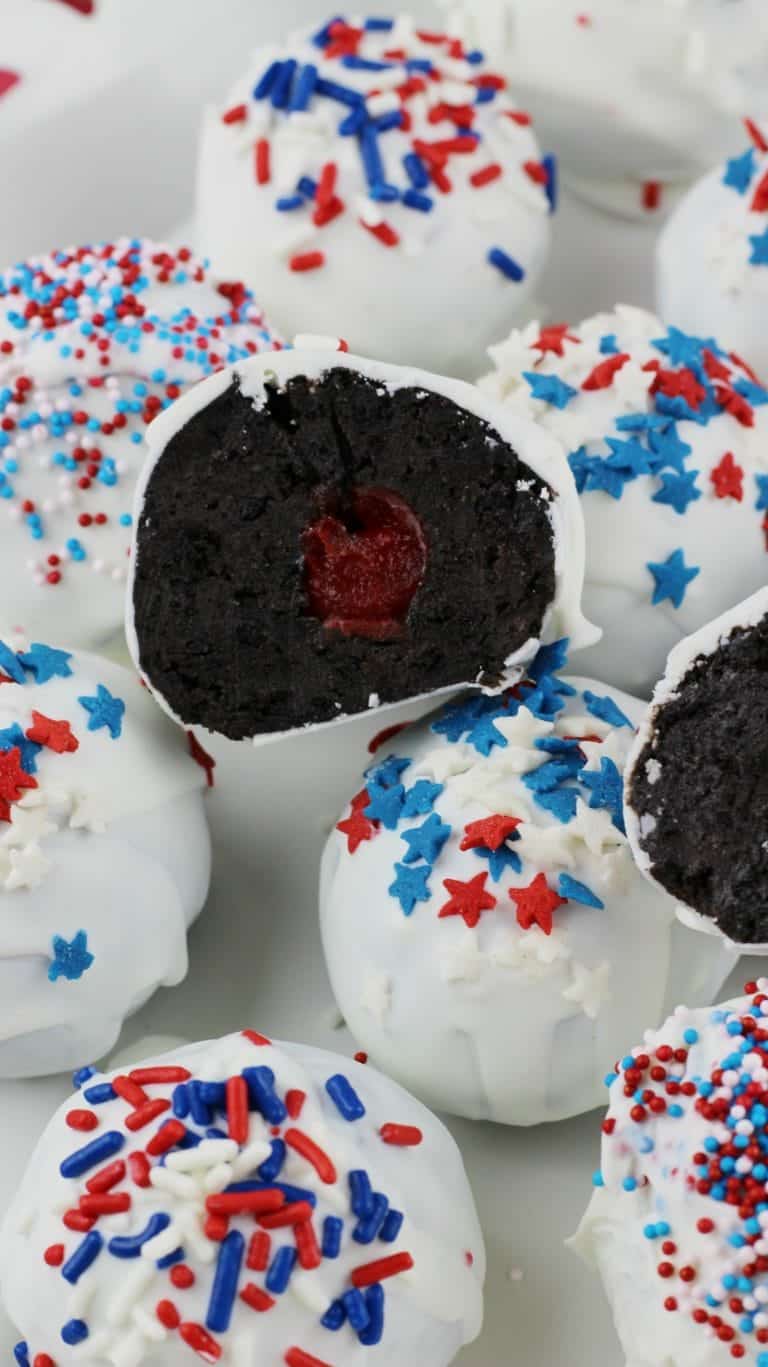 If you’re going to go to the trouble of making some kind of Fourth of July treat from scratch, would you rather make it something rather gourmet and decadent? Well, if you’ve never tried making truffles before, then maybe now’s the time to start! We made these red, white, and blue cherry stuffed Oreos covered in melted white chocolate and sprinkles that are a stunning combination of both flavour and texture. Get the full details for making them yourself on Lady and The Blog. 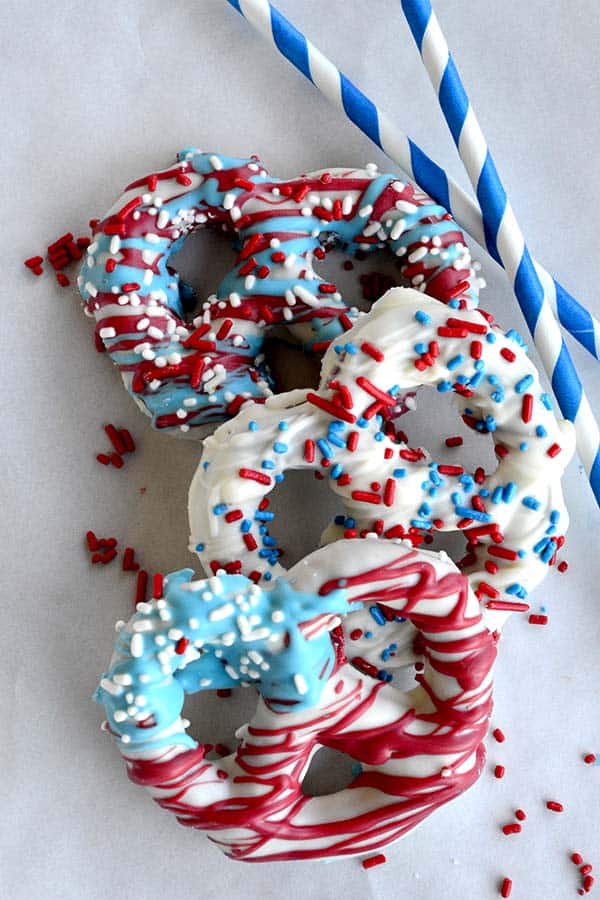 Are you the kind of treat love who has always enjoyed salty and sweet combinations the most? Then we have a feeling this iced soft pretzel recipe outlined step by step on Pink Cake Plate might be right up your alley! Their tutorial shows you how they prepared and melted the colourful chocolate, drizzled them, to look like American flags, and sprinkled them to their heart’s content. 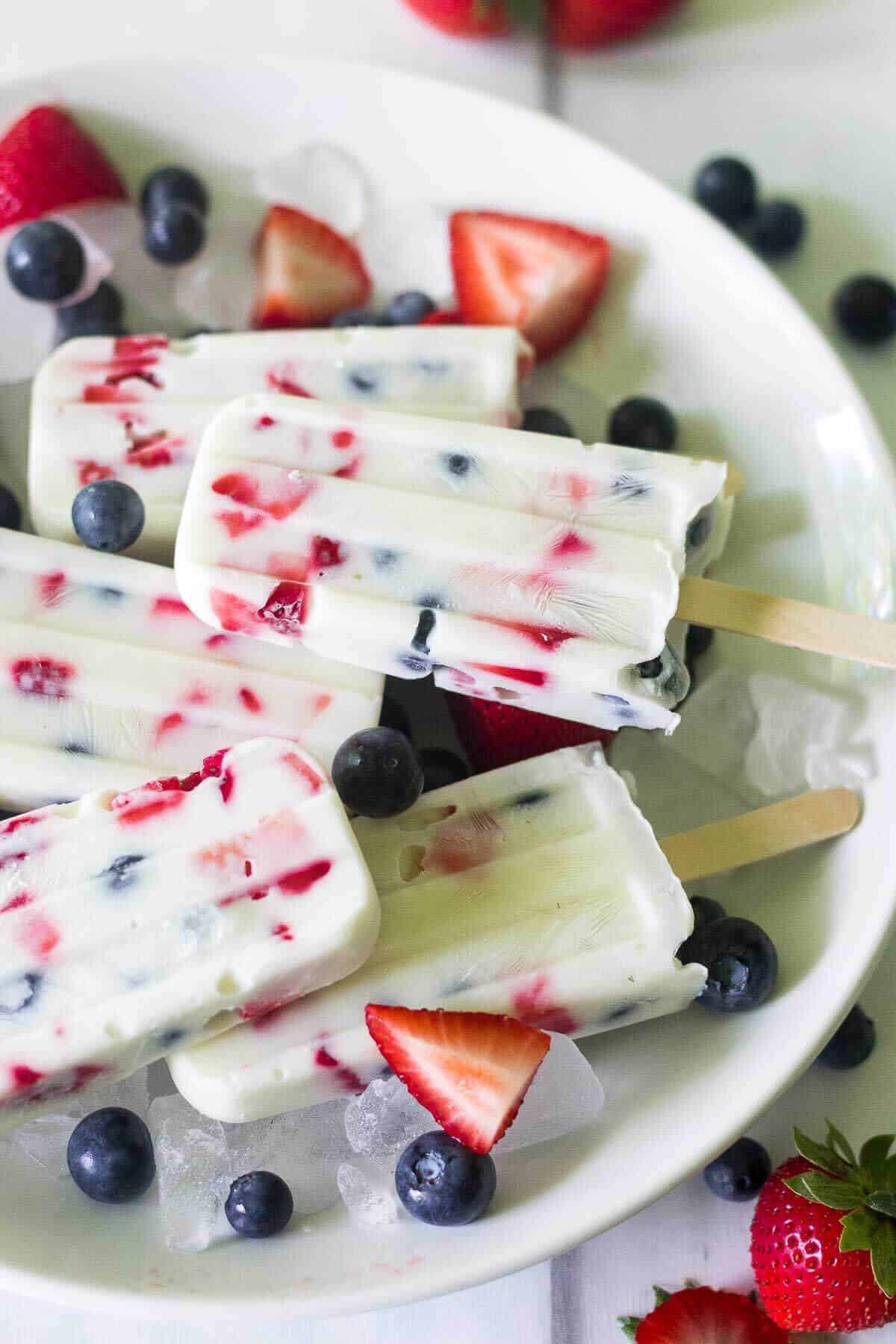 Do you live in a very hot place so you’ve been scrolling through our list hoping to come across some kind of refreshingly cold Fourth of July themed treat to cool your guests off? Well, we think you’ll be rather pleased to see that What Molly Made has just that kind of recipe for you! Take a look at their tutorial to see how these berry filled red, white, and blue yogurt popsicles are made. 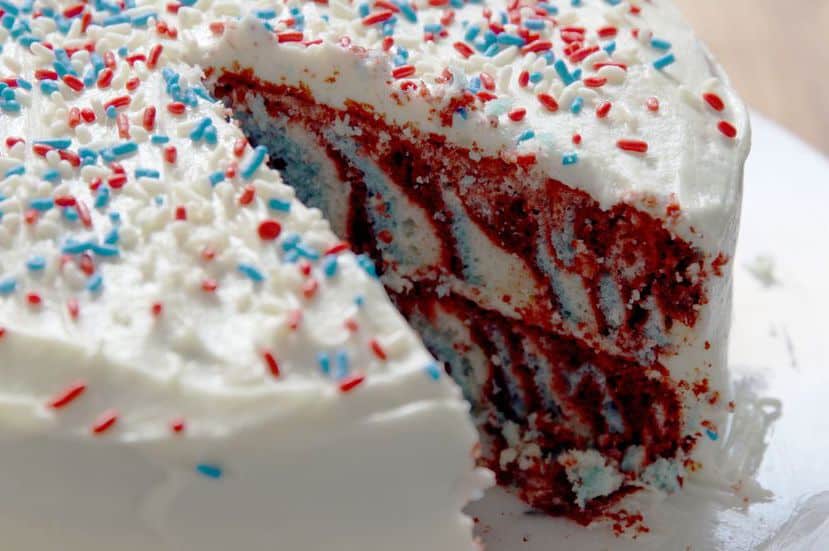 Did you really like the colourful swirling effect you saw in the freedom bark we showed you earlier but you know your guests prefer classic desserts and that’s the kind of thing you’d rather make? Then perhaps you’d get along a little better with this Fourth of July layer cake from Delish that has that same red, white, and blue marbled effect in the sponge on the inside, like a surprise when you cut into it! 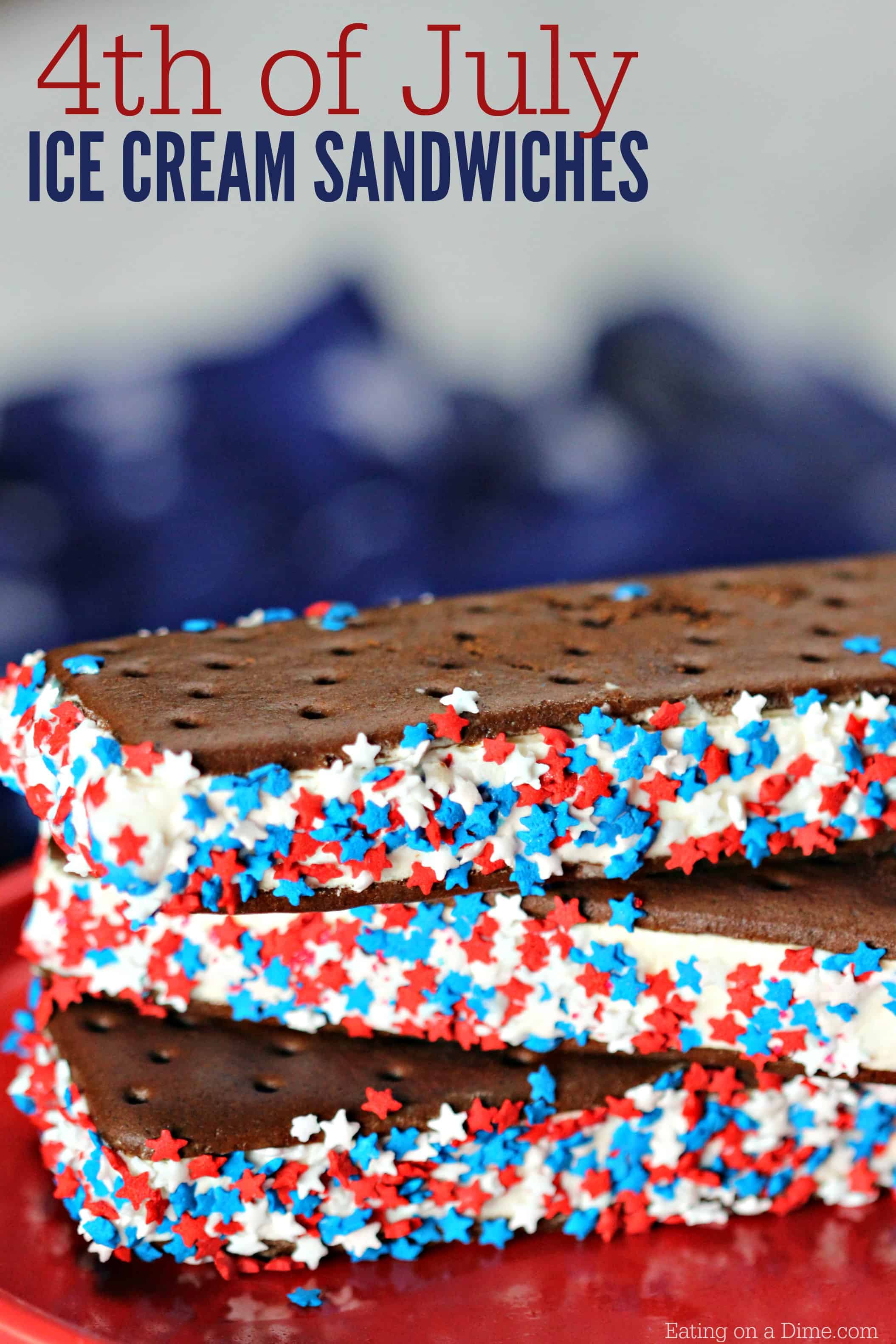 Are you actually looking for a Fourth of July dessert that’s very affordable and low maintenance to take to the BBQ you’ll be attending because you’re very busy around that time and you know you’ll be in a hurry? Perhaps you’re still just looking for another cold treat option because the yogurt in the popsicles we showed you earlier doesn’t appeal to you? In either case, we think you’ll appreciate the way Eating on A Dime bought simple, classic ice cream sandwiches and dipped the sides of the ice cream in red, white, and blue star shaped sprinkles! 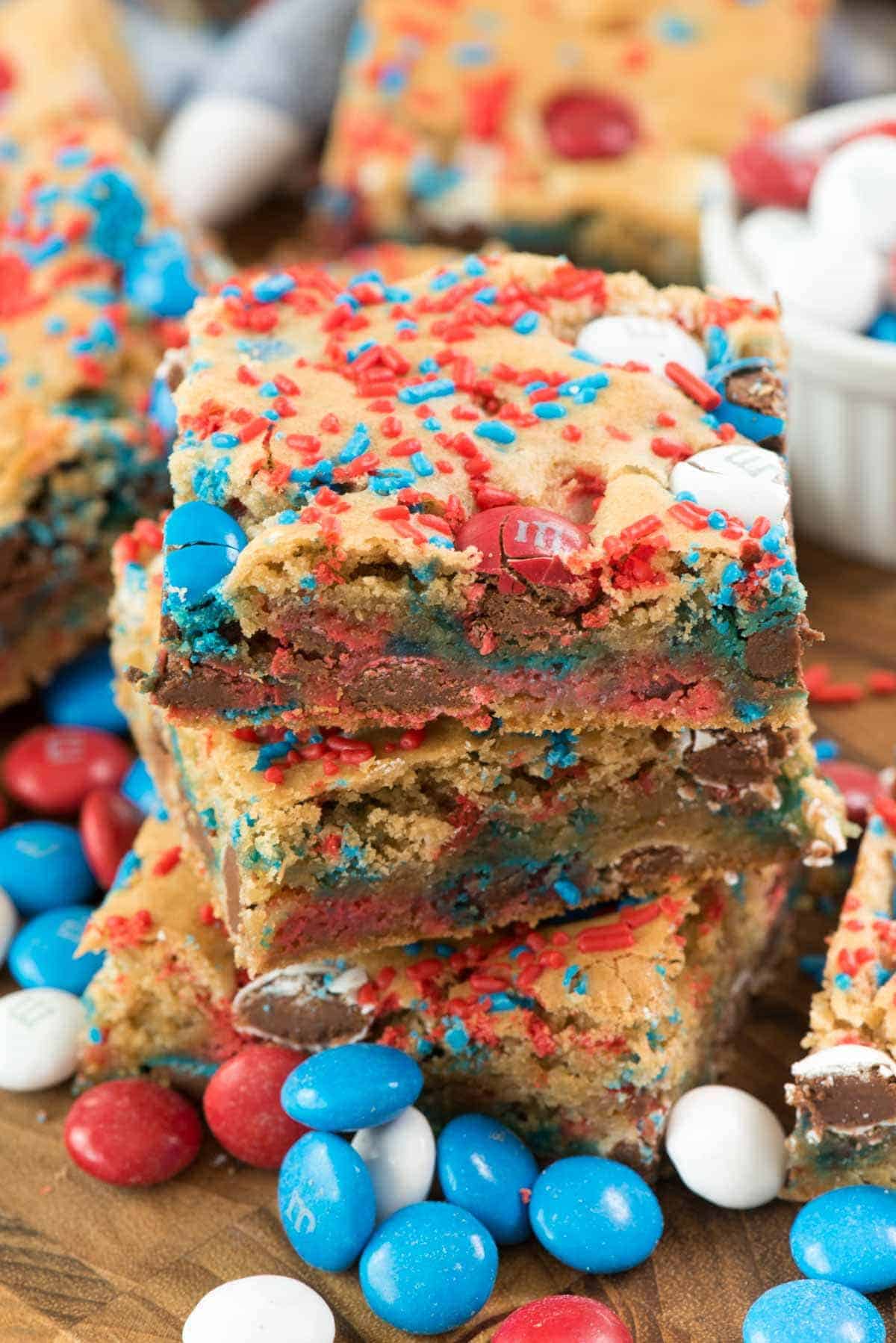 Did we really catch your attention when we talked about red, white, and blue marbled cake because baked goods are your favourite kinds of desserts, but you’ve actually always preferred brownies to everything else? Then you just might be the perfect person to give these “fireworks” blondies a try! The white batter of the brownie covers that shade while M&Ms and sprinkles cover the red and blue. Get the full details on Crazy for Crusts. 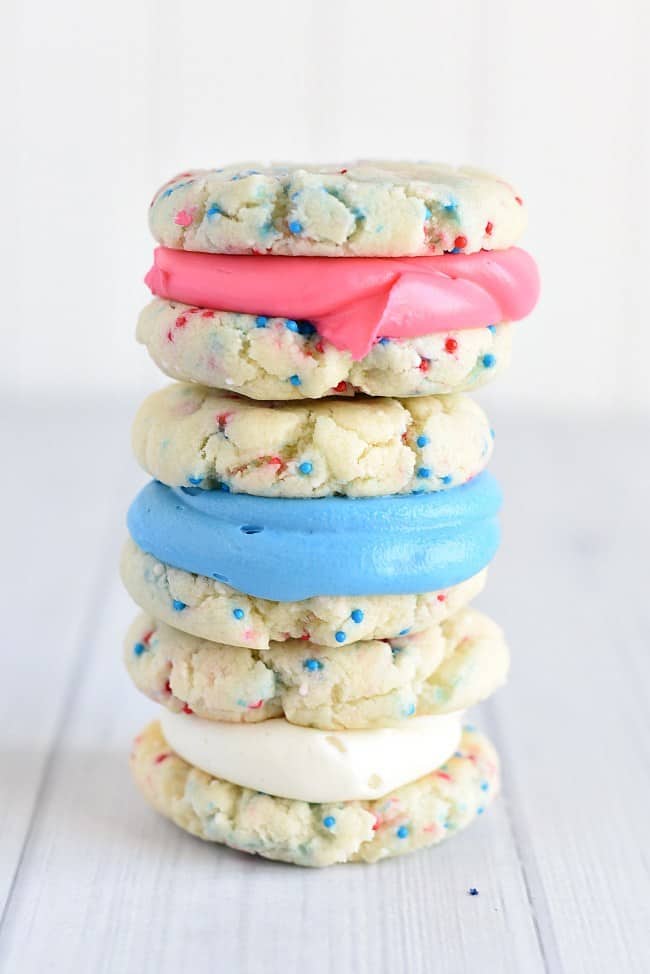 Perhaps we’ve piqued your attention with the idea of making some kind of dessert sandwich but you don’t think an ice cream based treat would survive the patio you’ll be sitting on all afternoon on the 4th? Then we’d suggest taking a look at these themed whoopie pies instead! Take a better look at Fun Squared to see how they made these patriotic white sugar cookies with red and blue sprinkles, dolloping a healthy lick of red, white, or blue cream in the middle.

Have you made other fantastic 4th of July treats and desserts before that your BBQ guests loved but that you don’t see here on our list? Tell us all about it or link us to the recipe so we can give it a try too!