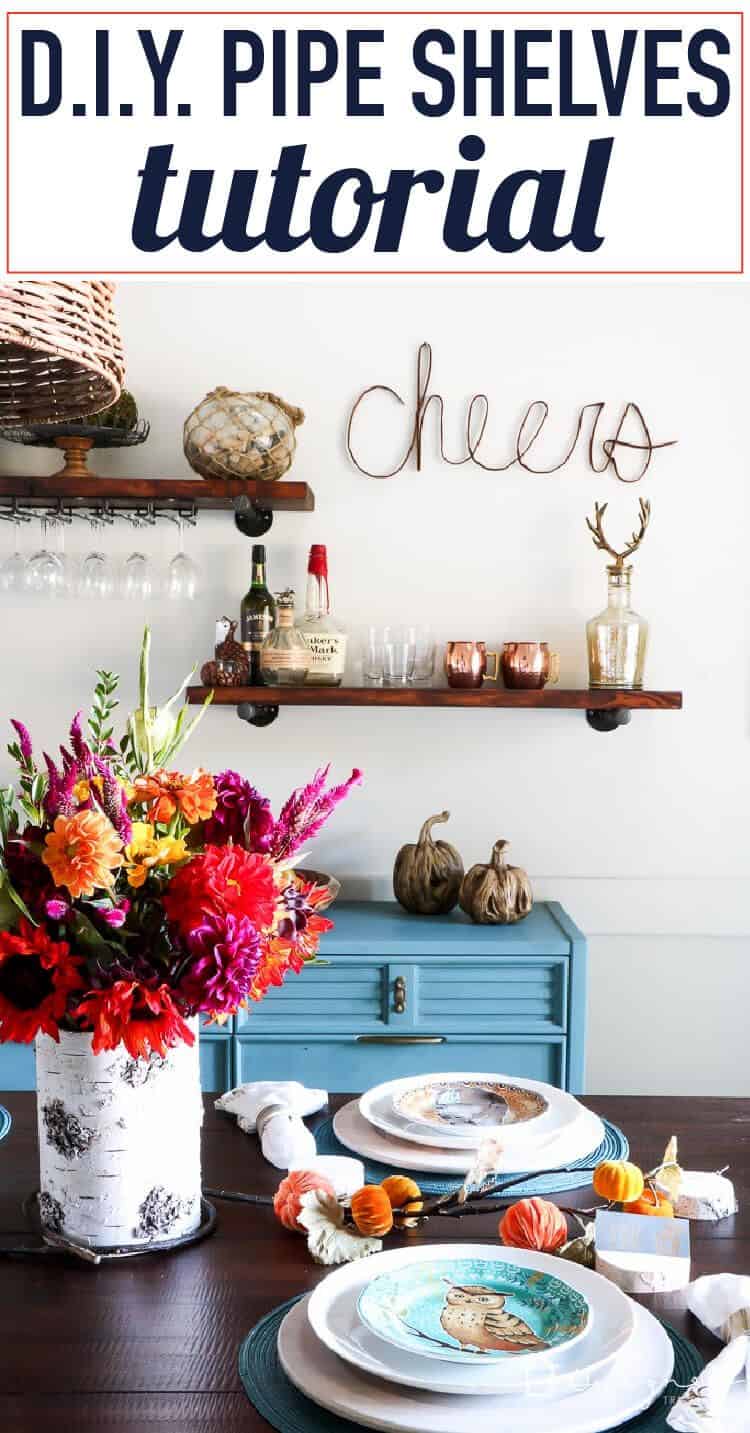 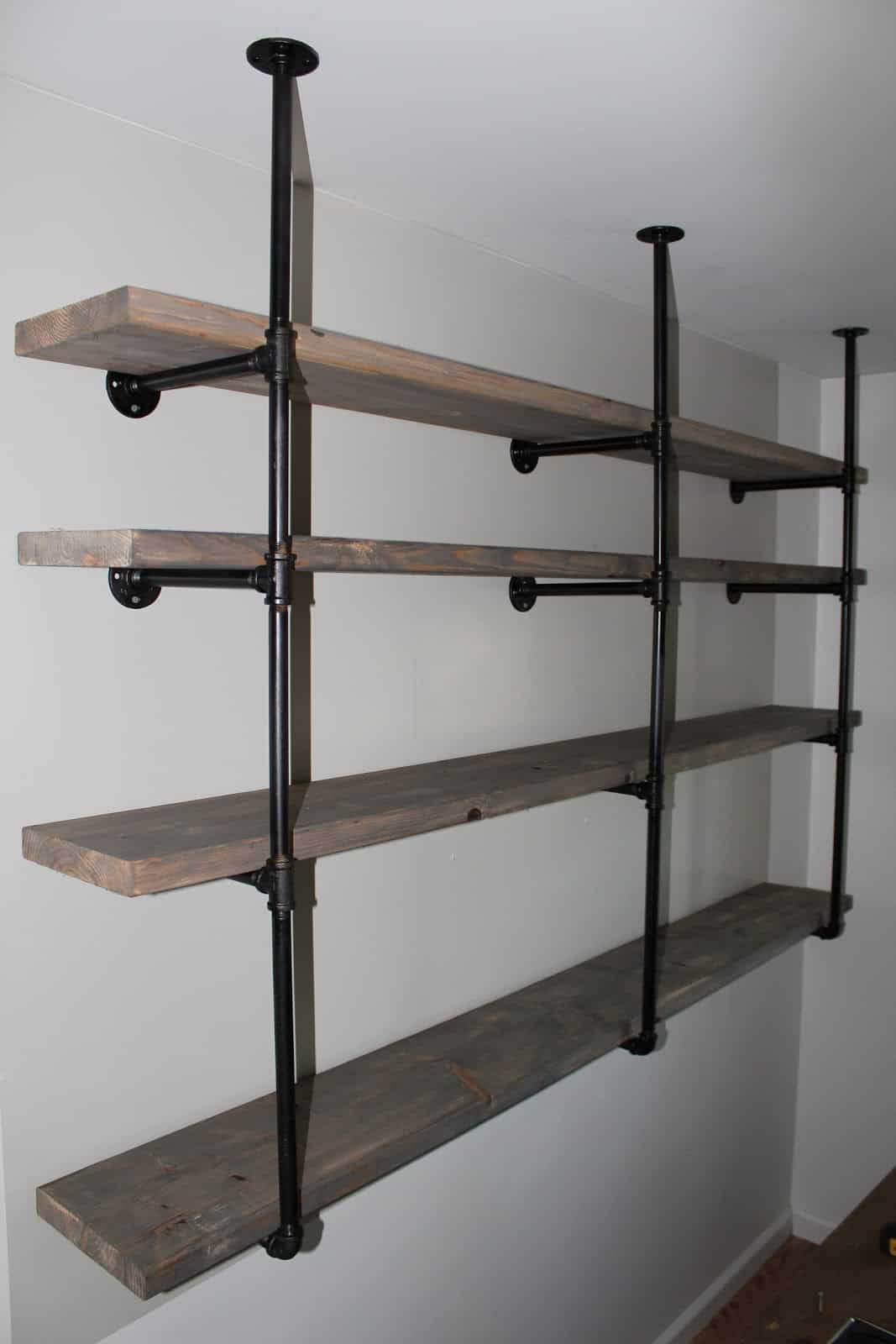 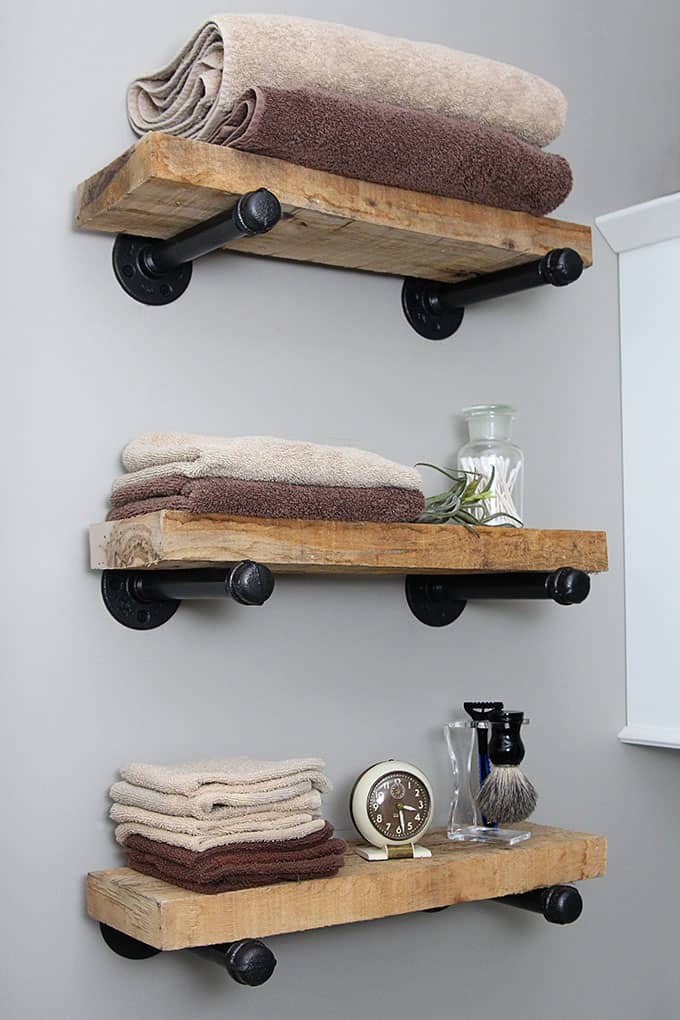 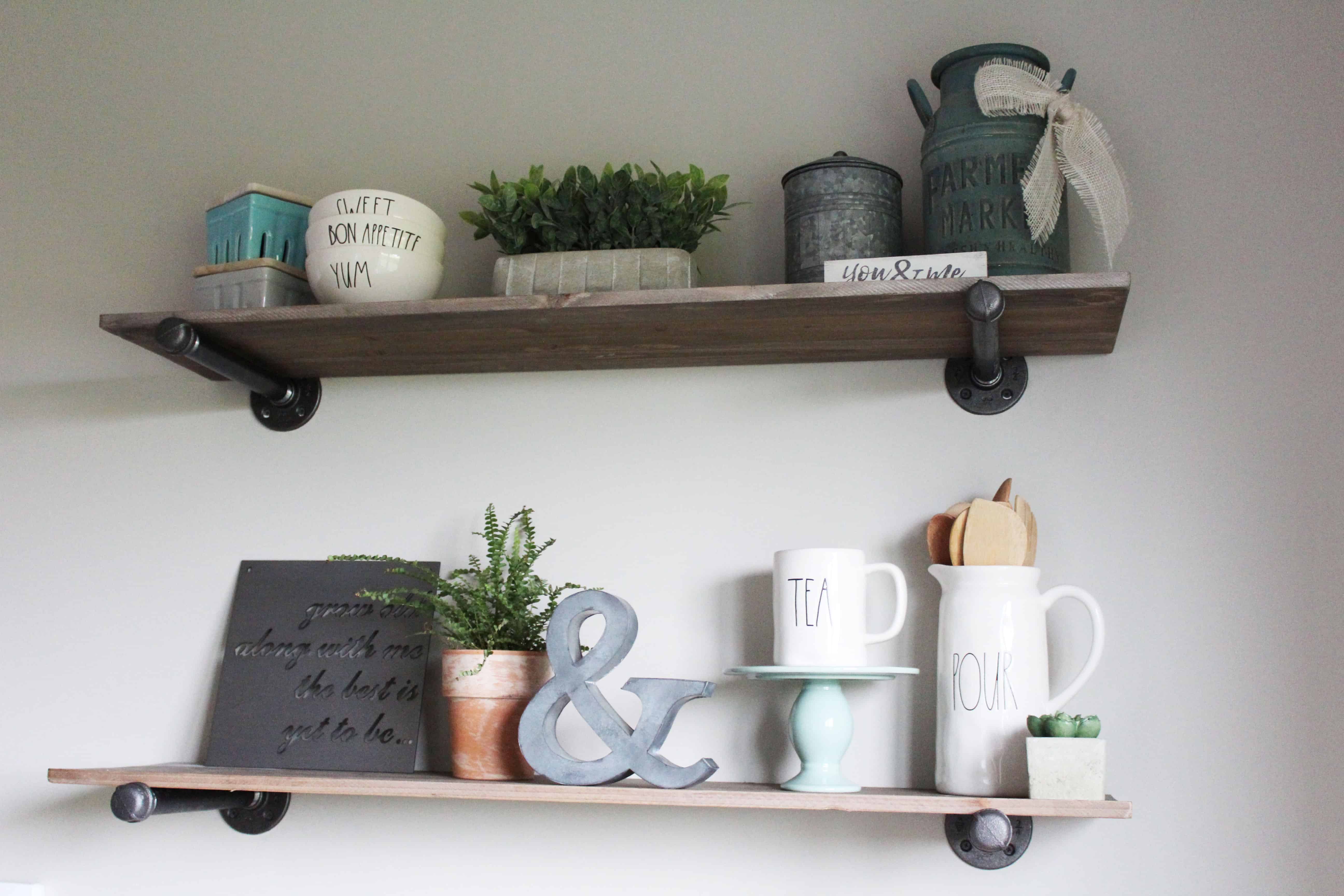 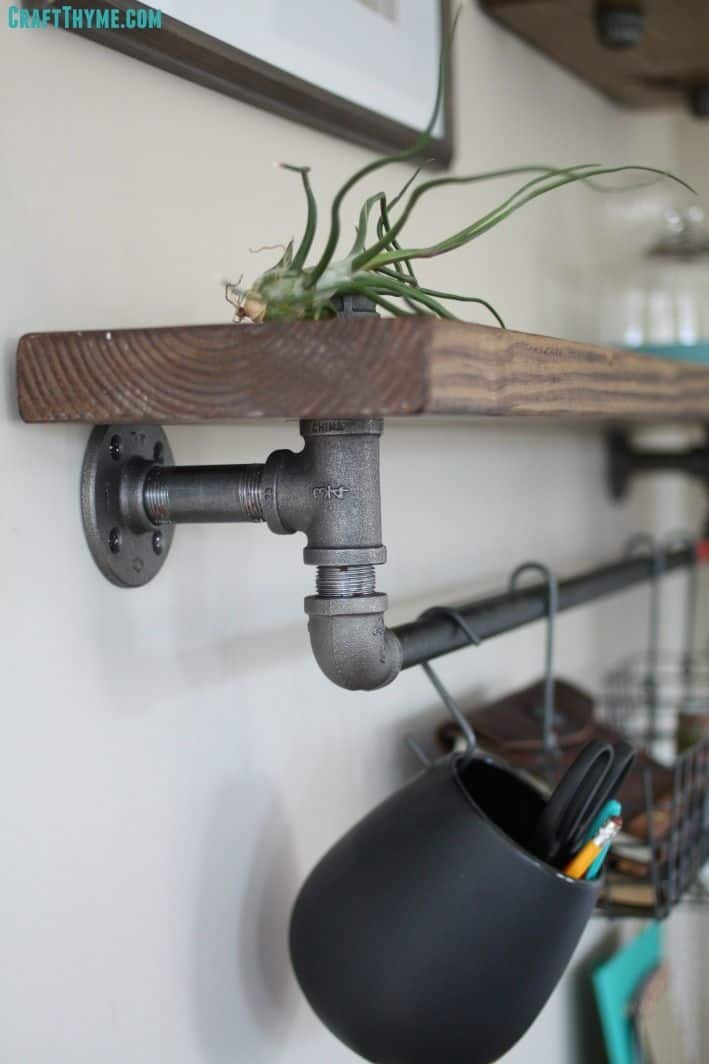 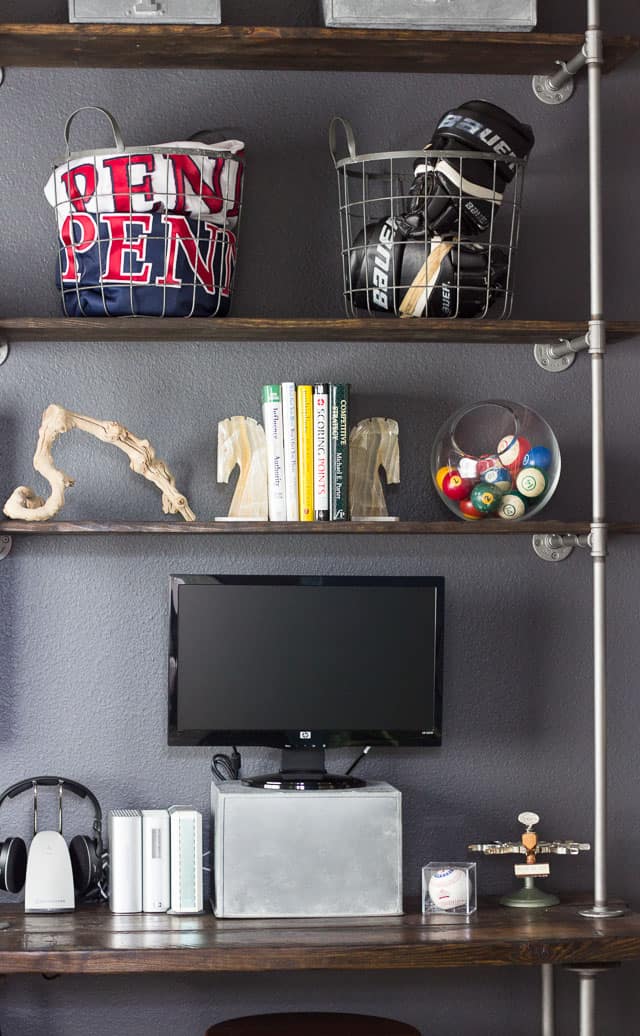 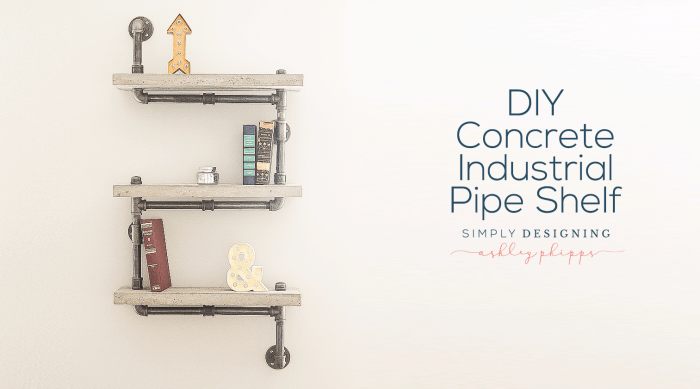 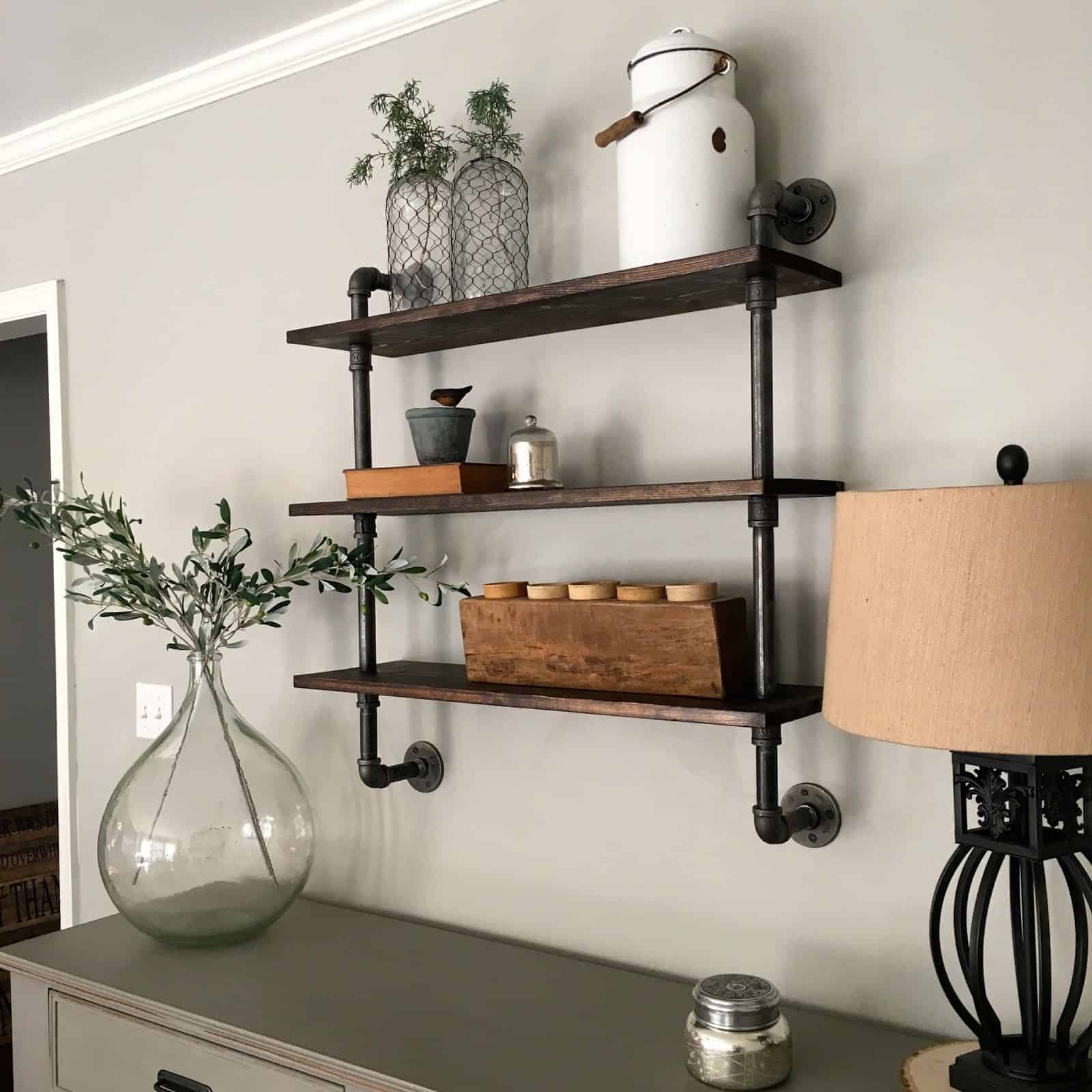 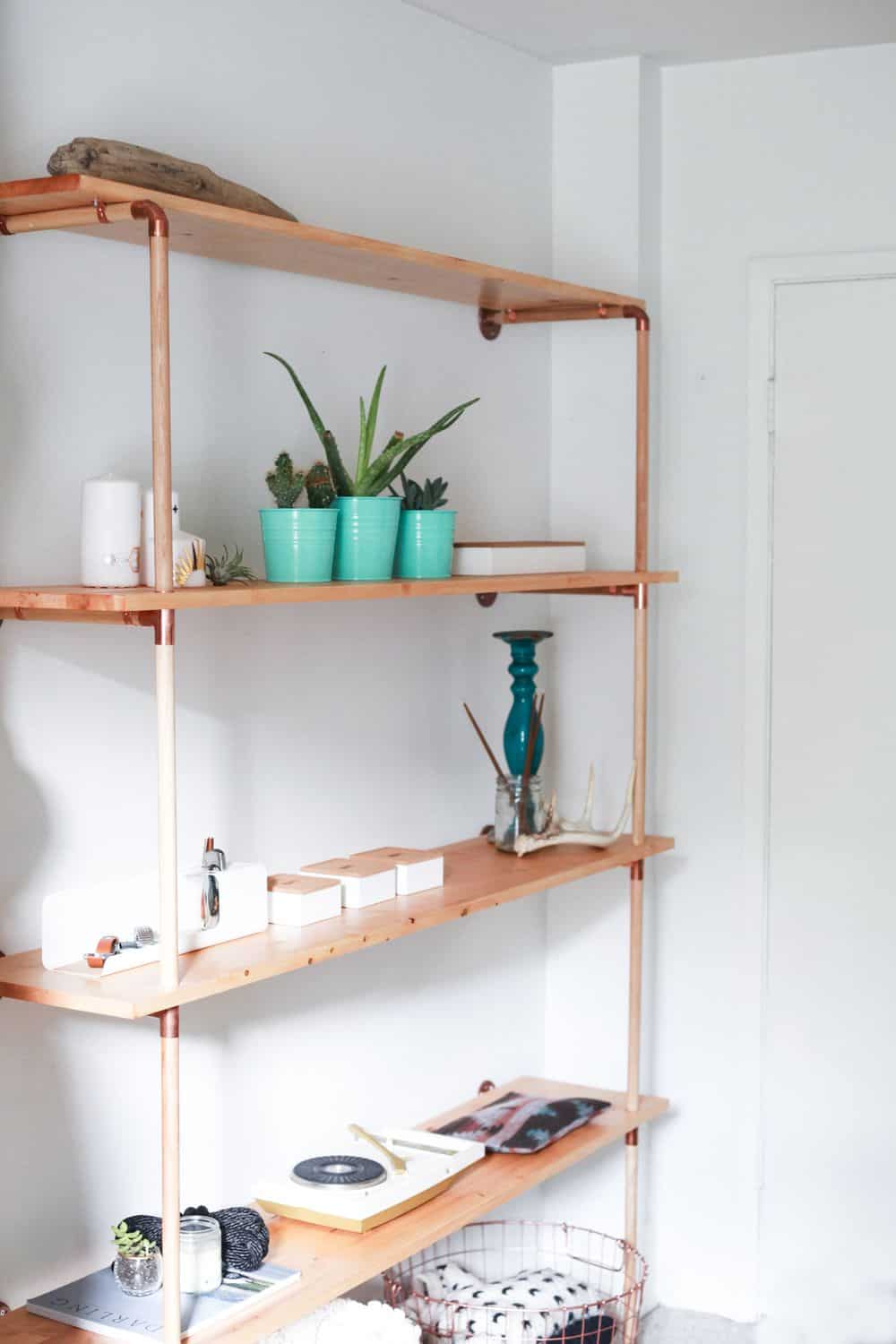 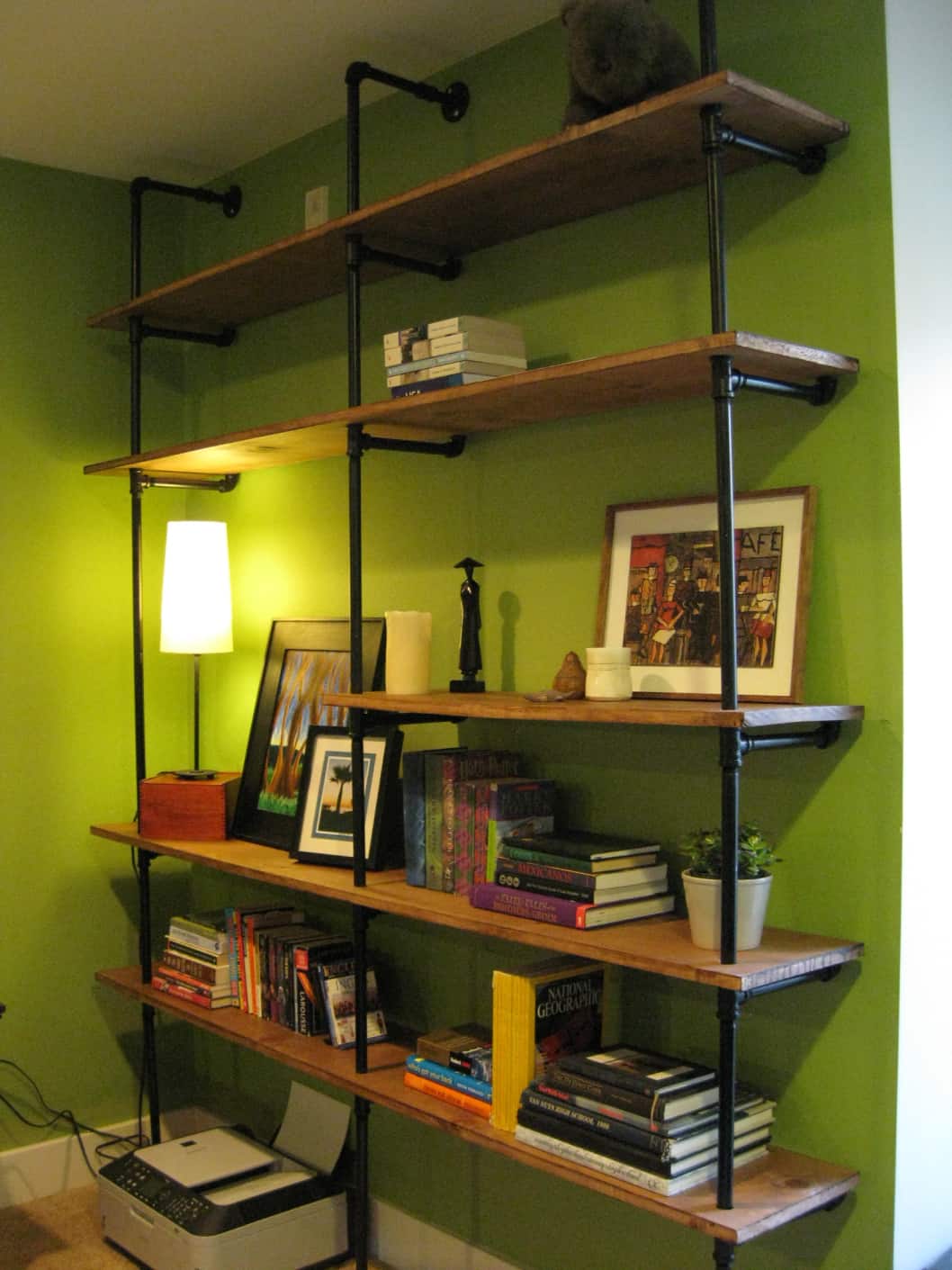 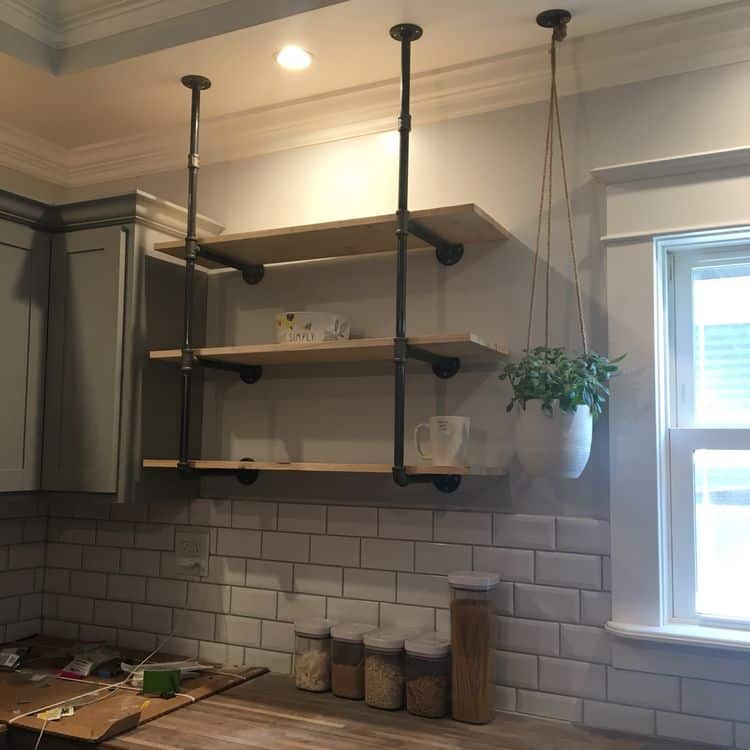 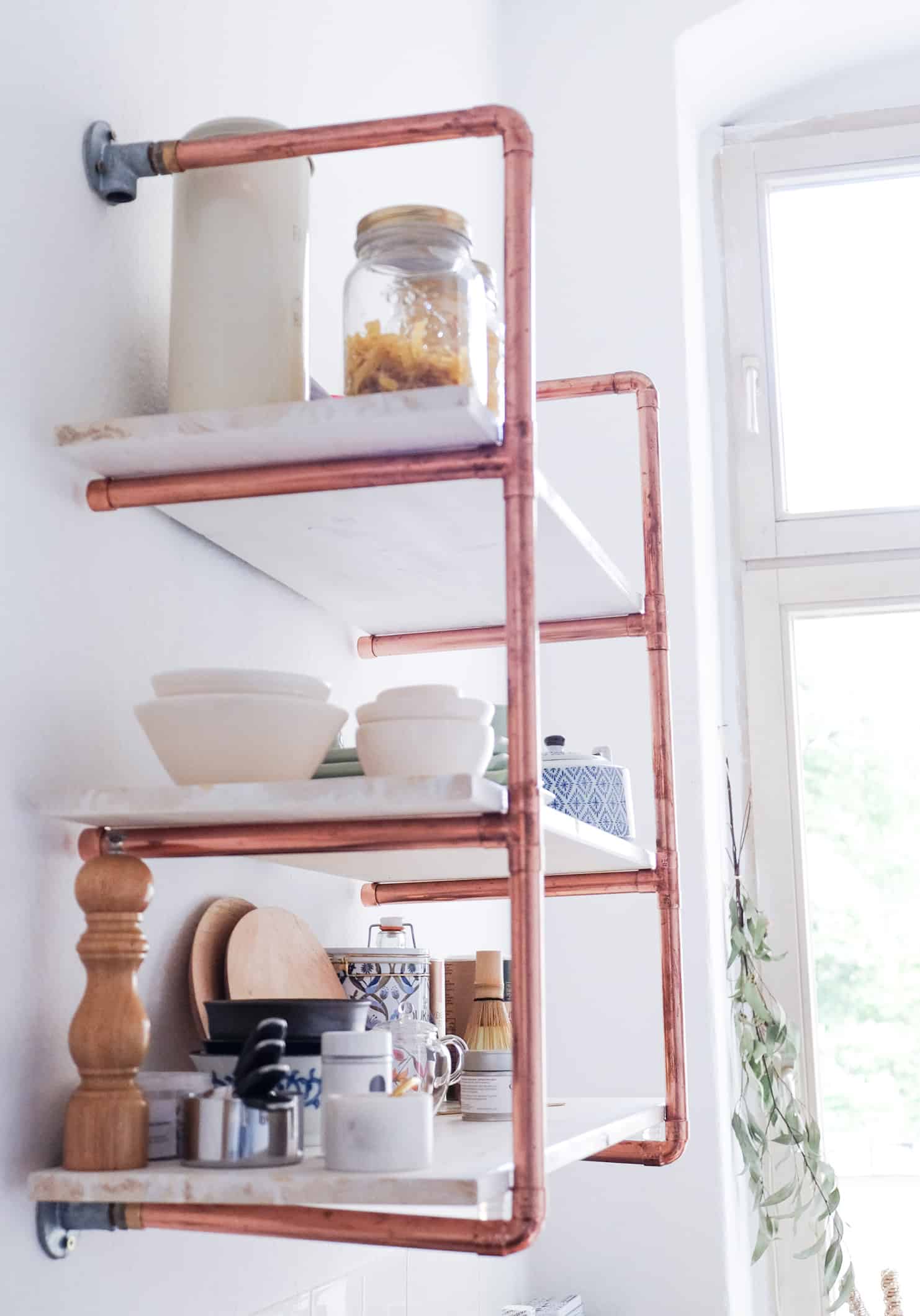 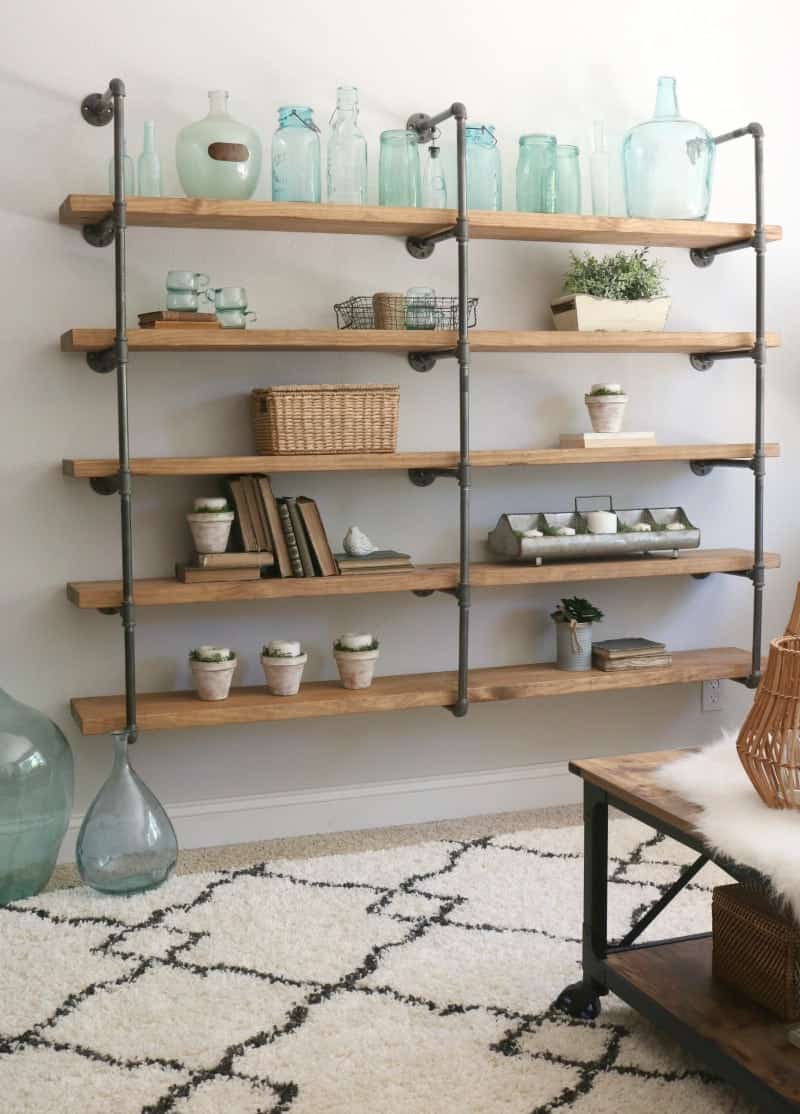 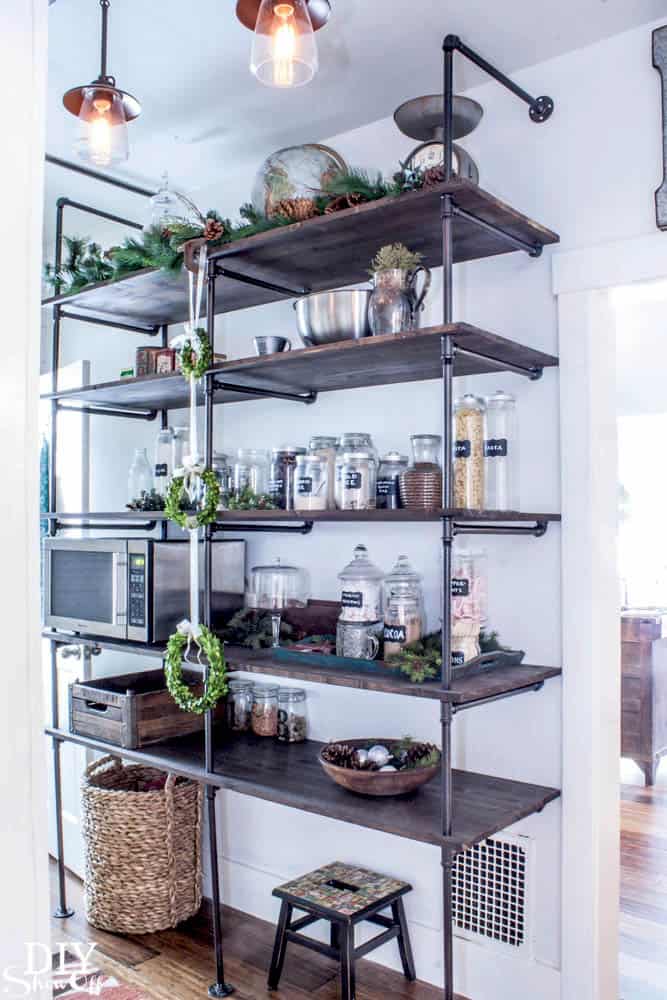 In the world of home decor, the past few years have seen a wonderful resurgence of an industrial chic home decor aesthetic that’s perfect for people who adore an urban influence but still have a fondness for old fashioned looking rustic inspirations as well. One of our favourite things to come out of this trend has been furnishings and home features that involve actual metal piping, particularly if the pieces are homemade! In fact, we’ve been thinking about adding a piece of this kind into our own home decor scheme, which is part of the reason we’ve had our eyes peeled for awesome tutorials and suggestions regarding different ways to make pipe shelves.

Just in case you love the idea of making pipe shelves just as much as we do, if not more, here are 15 of the very best ideas, designs, and tutorials that we’ve come across so far in our search for guidance and inspiration!

Are you looking for a tutorial and design that’s quite simple indeed, not just because you’re new to the whole furniture making idea but also because you love a sort of shabby chic, purposely unfinished look? In that case, we’d definitely suggest taking a look at the way Magnolia made these very open pipe shelves with no edges or endings on the wood. They’re great for a kitchen!

Are you actually so enamoured with the idea of making, installing, and using pipe shelves of your very own that you think you’d prefer to make a very large unit indeed, extending it all the way from floor to ceiling rather than just making a smaller, more discreet version? Then we think you simply must take a look at the way DIY Showoff made these stunning standing and mounted shelves that are much larger and much sturdier than some designs you’ll find.

Perhaps you’re really into the basics of the idea but, even though you love industrial chic aesthetics, you’re still looking for a way to make your piece a little lighter and more modern looking, rather than being so dark and rustic in appearance? In that case, we think perhaps you’d get along a little better with something like this fantastic white wood and copper piping tutorial outlined step by step on Hey Lila Hey!

Are you still interested in the floor to ceiling idea but you’re actually a little newer to the world of DIY and piece building than a lot of the people who you know who have made these shelves, so you feel like you could use a little extra help? In that case, we’d absolutely encourage you to take a look at the way DIY Esq. outlines their own pipe shelf making process in a manner that some might consider almost too detailed if it weren’t so incredibly helpful and clear for beginners!

Perhaps you’re a little less concerned with the process of making your shelves because you feel quite confident but you’re looking for a bit of guidance when it comes to style and aesthetic? We can definitely understand wanting to make a piece like this but have it be a little more polished and fixed up looking rather than being too rustic? In that case, we have a feeling this slightly more completed tutorial from Unoriginal Mom might be a little more up your alley.

Are you actually very interested in the structure of these kinds of shelves and you like the idea of incorporating a bit of metal but you’re just not sure that you want to have complete pipes involved in the way your shelves look, as the rest of your room is primarily wood? Then we think you might prefer to see how Treasures and Travels used copper brackets and pipe bends but replaced their straight pipes with wooden dowels! You still get that modernized industrial effect but in a slightly more neutral way.

Perhaps you’re still thinking about how much you like the idea of making longer shelves but you’re also convinced that, because the rest of your room is very upcycled and industrial too, you’d like an aesthetic or style that’s a little more solid looking? In that case, we think you’ll appreciate the way The Design Twins made this version with thicker wood for the shelves and thicket pipes for the frame. They give you all kinds of tips and tricks for working with these heavier materials.

Perhaps you don’t actually have much room to work with when it comes to this project so you’ve been doing your best to find a guide that will help you make a version that’s smaller and lighter than some of what you’ve seen so far? In that case, we’d definitely suggest taking a look at how Mindfully Gray made these little shelves and anchored them to the wall nice and steadily.

Of course, the pipe shelving look is one that’s already quite unique, but what if your space is pretty contemporary and based in shape? Then there’s no harm in getting more creative with the shape of your shelves too! Check out how surprisingly simply Home Depot made these cool angular pipe shelves, as well as how they made the flat shelving pieces from concrete rather than wood! This gives you a whole different industrial aesthetic.

Besides giving you some awesome tips and tricks for making pipe shelves using thinner wood and pipes for a lighter look, we’re in love with this tutorial from Design Improvised because they also show you how to make not just the pipe shelves that you’ll mount on your wall but also a matching desk that will sit right beneath them. Change up the aesthetic of the piece by playing with the colour of the wood and what kind of pipes you decide to use!

Are you quite into the idea of having pipe shelves above your desk but you already have a desk that you like and don’t really think you need to make a new one? Then maybe you’d get along better with something like this simple, singular wood and pipe shelf from Craft Thyme. We love that they also show you how they added a spare pipe below to hang supply holders on so the things you need are always accessible right there above your desk.

Maybe you’re pretty enamoured by the idea of making a much more space efficient singular pipe shelf, like the floating shelves that are so trendy right now, but you don’t need the hanging bar underneath so you’re hoping for something even easier? In that case, we’d absolutely suggest taking a look at how The Holtz House made these straight pipe shelves with wood that sits right on top.

Were you almost convinced that the idea right above this was the style and format you’ve like the best on our whole list so far but you’re also wondering whether a sturdier style might suit your space a little better? In that case, we’d definitely suggest taking a look at how House of Hawthornes created this series of straight pipe floating shelves that uses much thicket planks and pipes. Their tutorial gives you a few tips for working with these supplies instead.

Are you still convinced that you’d like to anchor your pipe shelves a little more heavily and have them very steady indeed so you can put whatever you like on them but you’re not sure you want to mar your brand new wooden floors by attaching them there? Then perhaps you’ll get along a little better with the way Sylvie Liv fastened theirs into the ceiling instead!

Are you actually still scrolling through our list and thinking about how you’re most interested in making the simple straight pipe shelves we’ve shown you so far but you’re a very new beginner when it comes to handy projects around the house and you’re looking for a tutorial that lays it out even more simply than most? Then we’re pretty sure Designer Trapped has the precise kind of resource and explanation you’re looking for.

Do you know a fellow DIY enthusiast and avid home crafter who loves the look of industrial pipe shelves and wants to try making some of their own but who you know could really use some guidance along the way? Share this post with them so they have all kinds of awesome designs and tutorials to choose from!

How to Remove PVC Glue – Tips and Tricks

DIY Desks: How to Build Your Own Desk and 35 DIY Desk Ideas