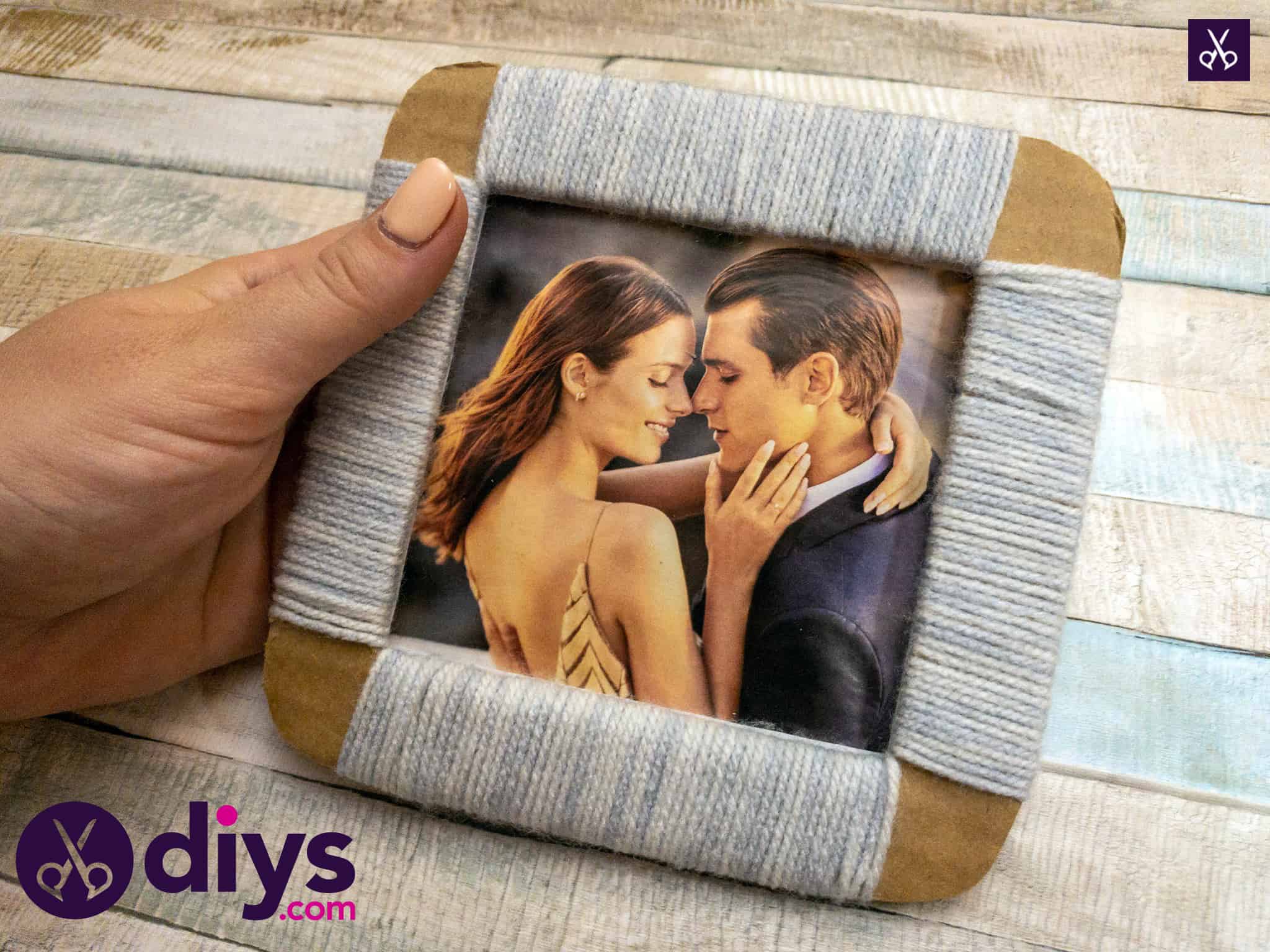 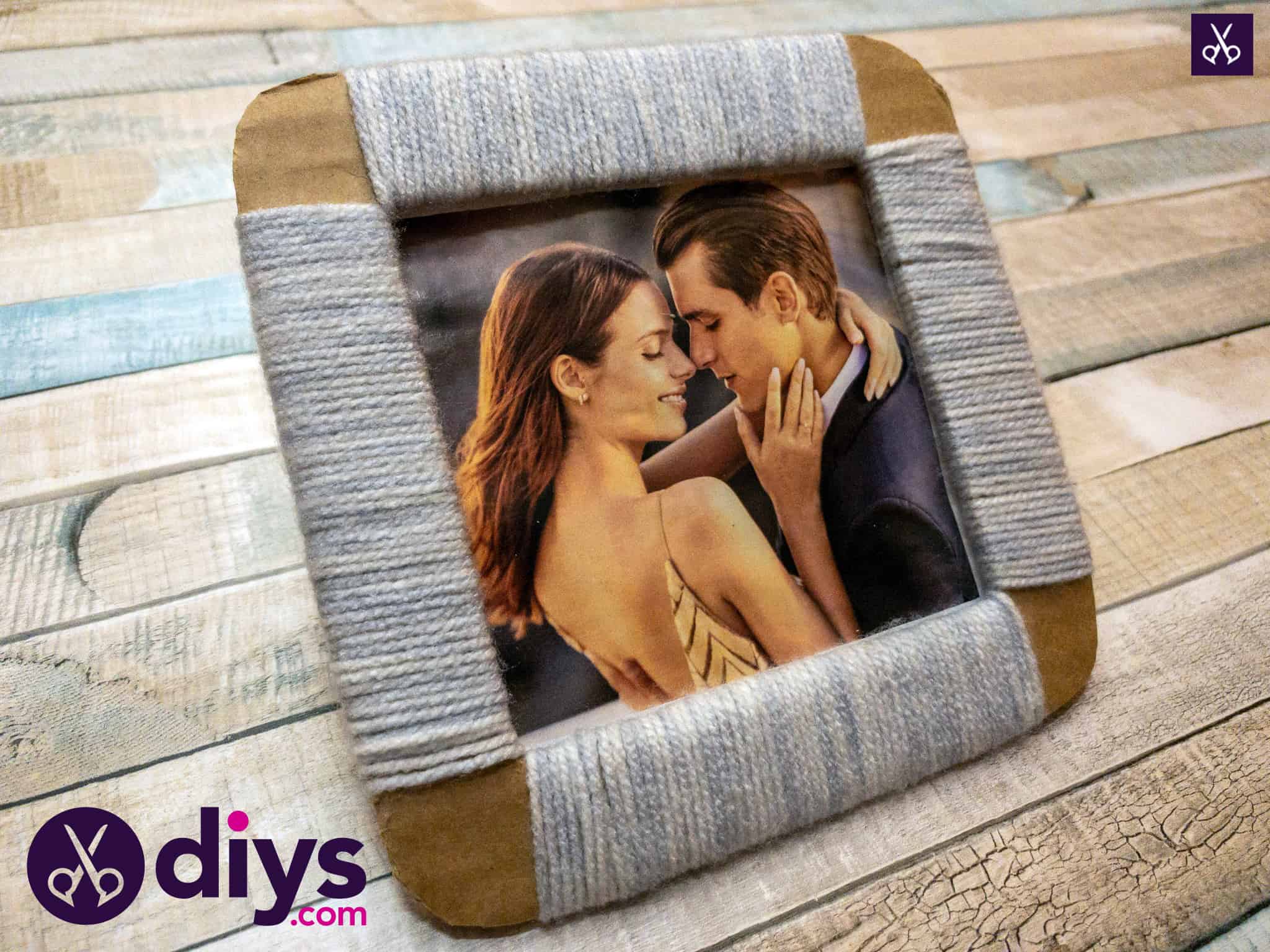 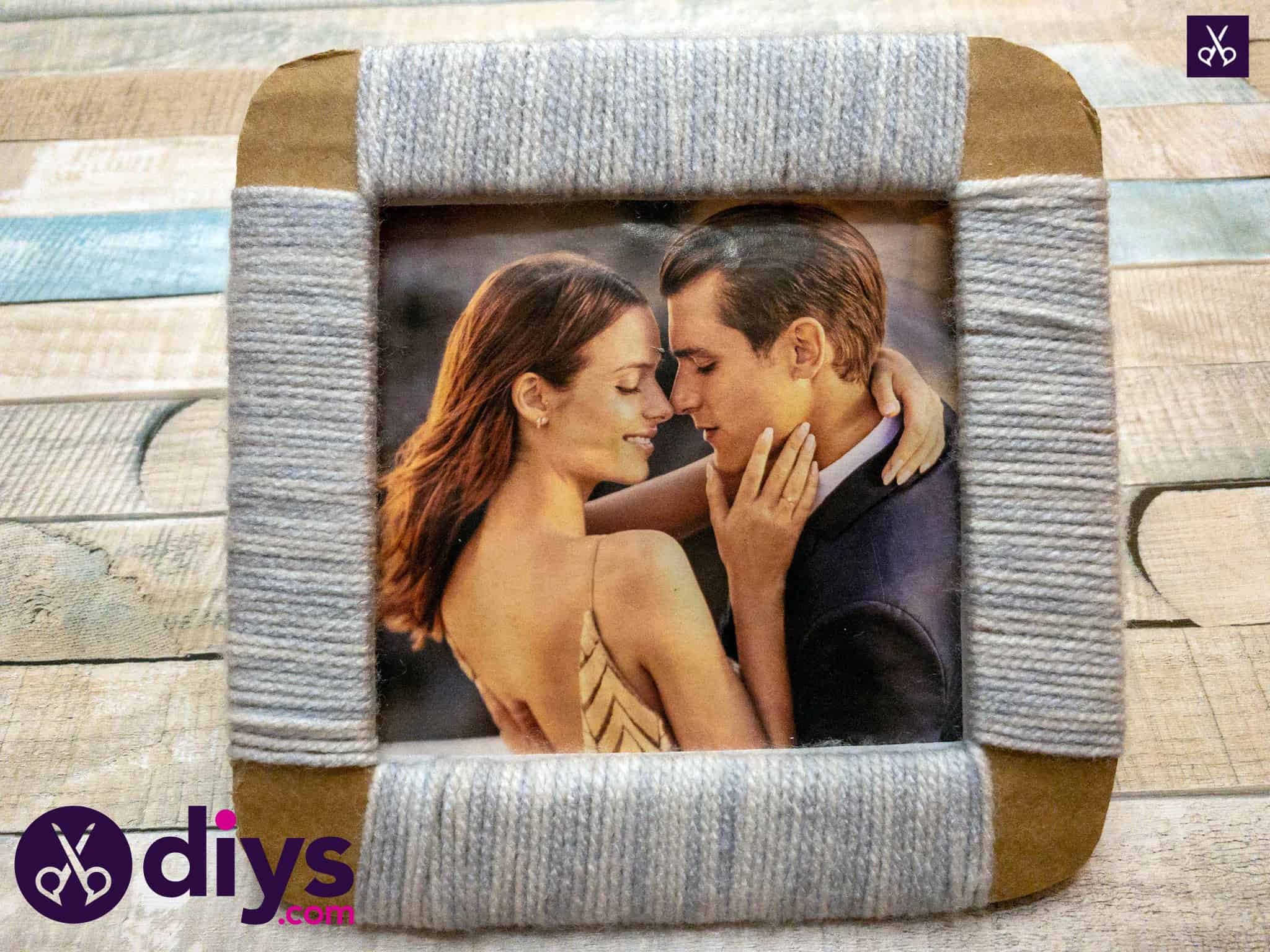 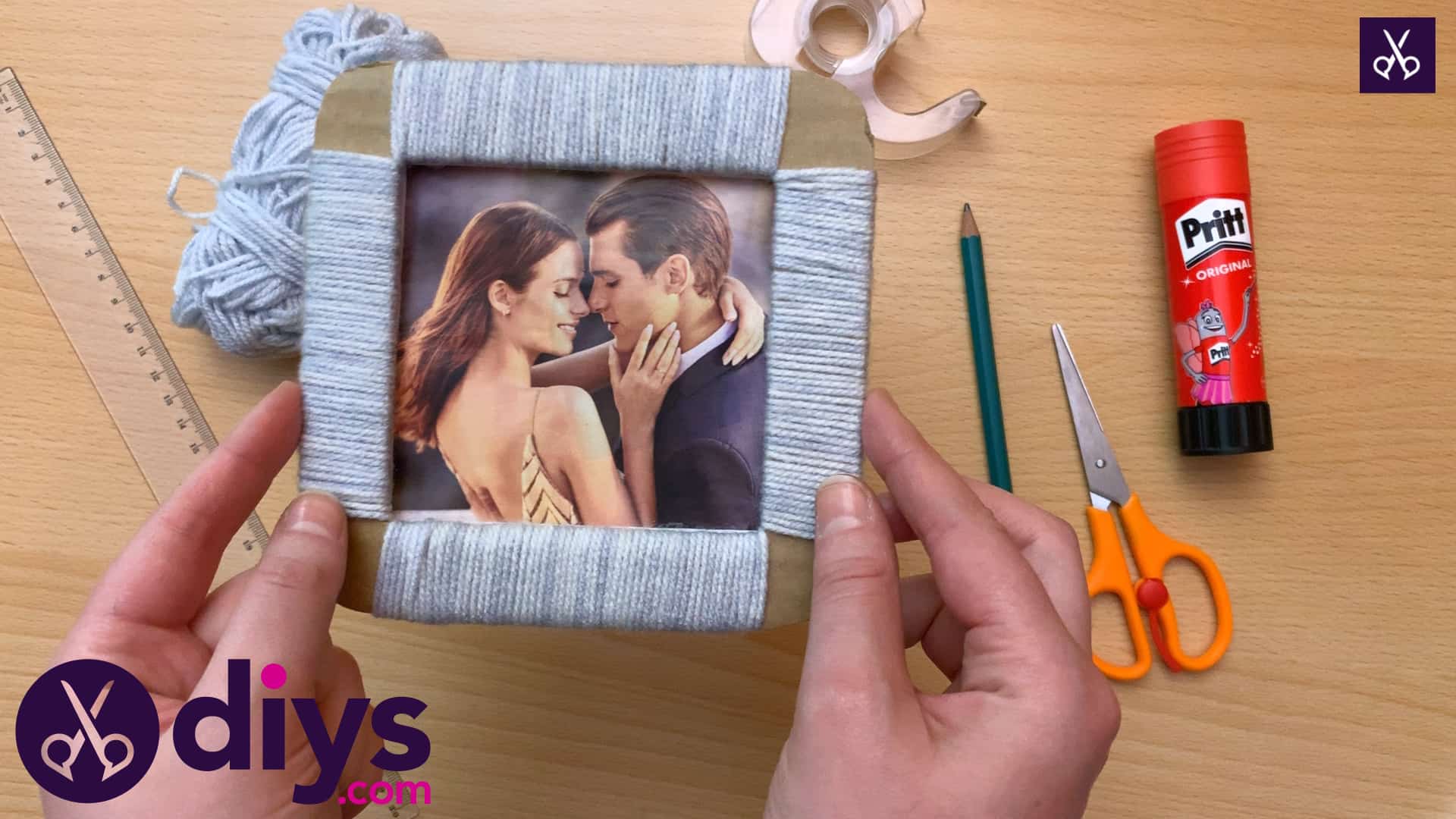 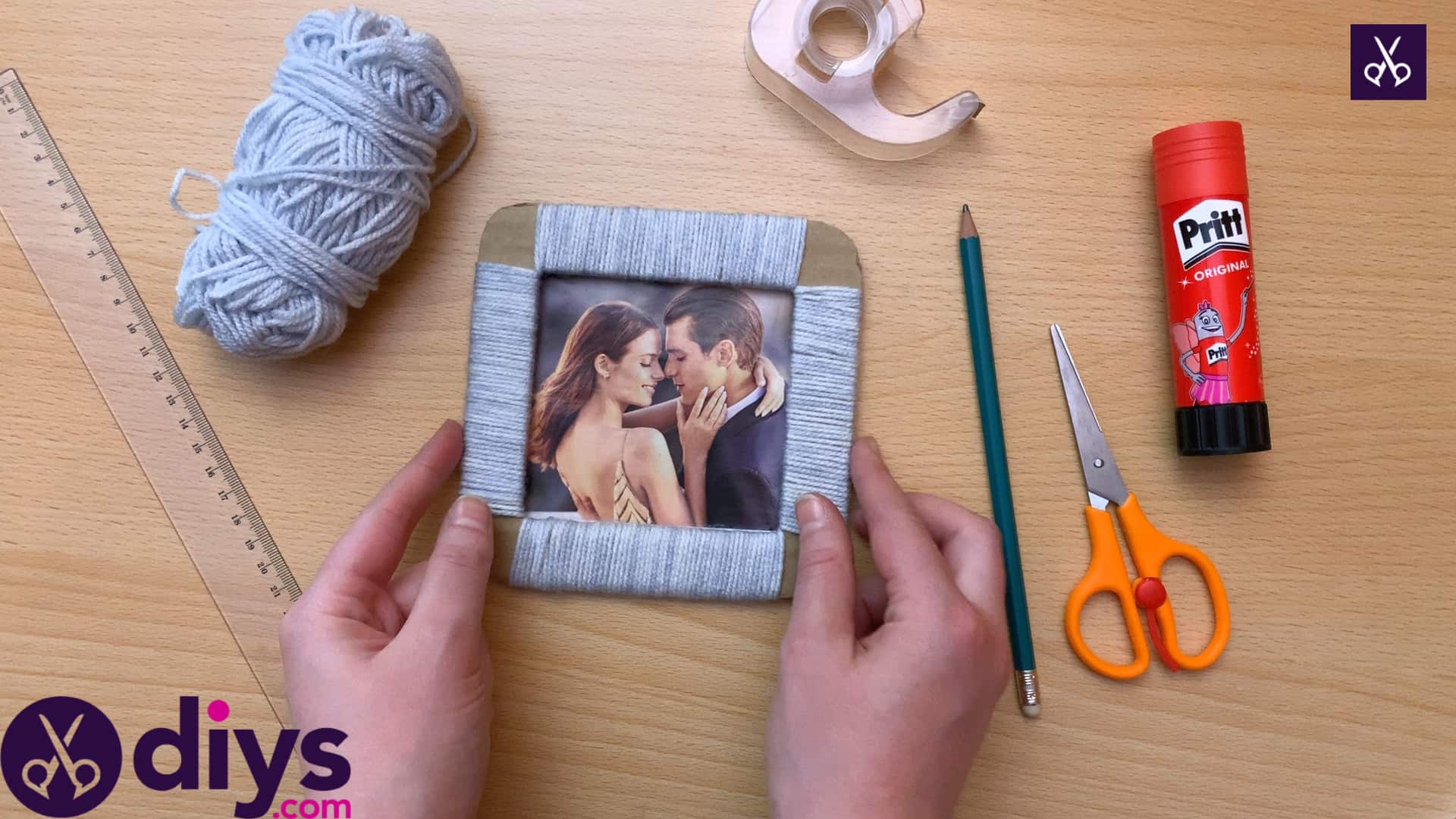 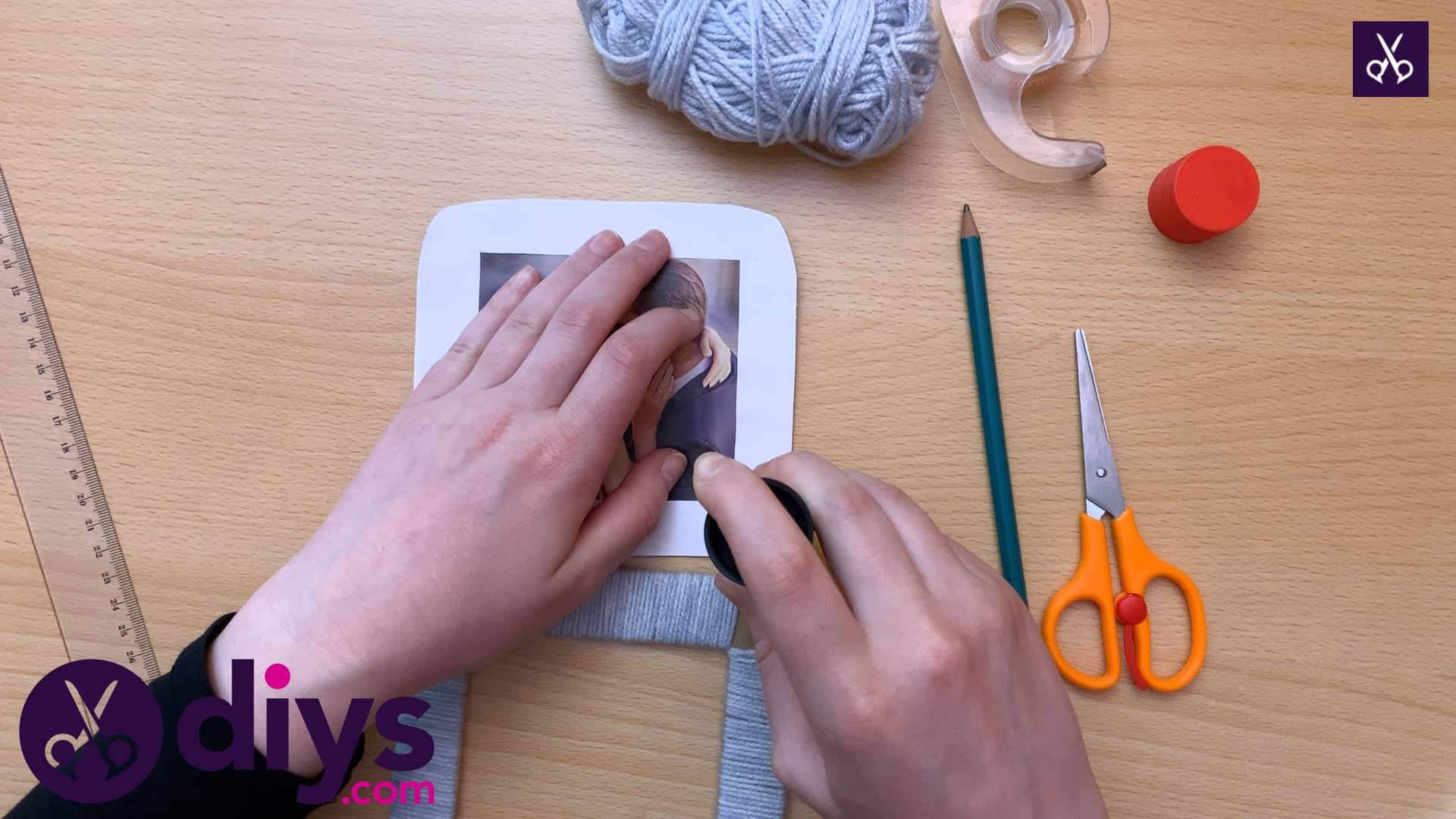 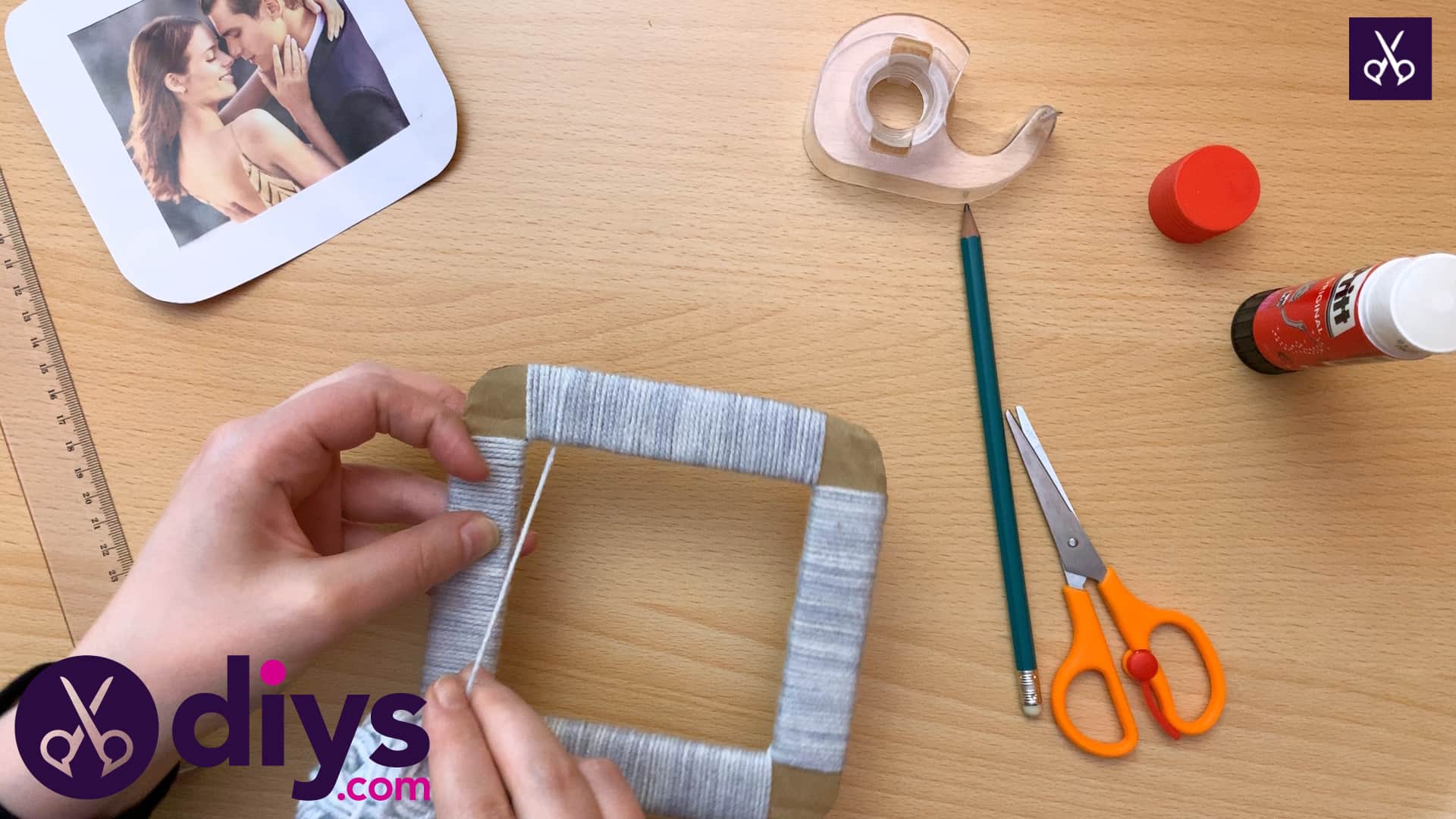 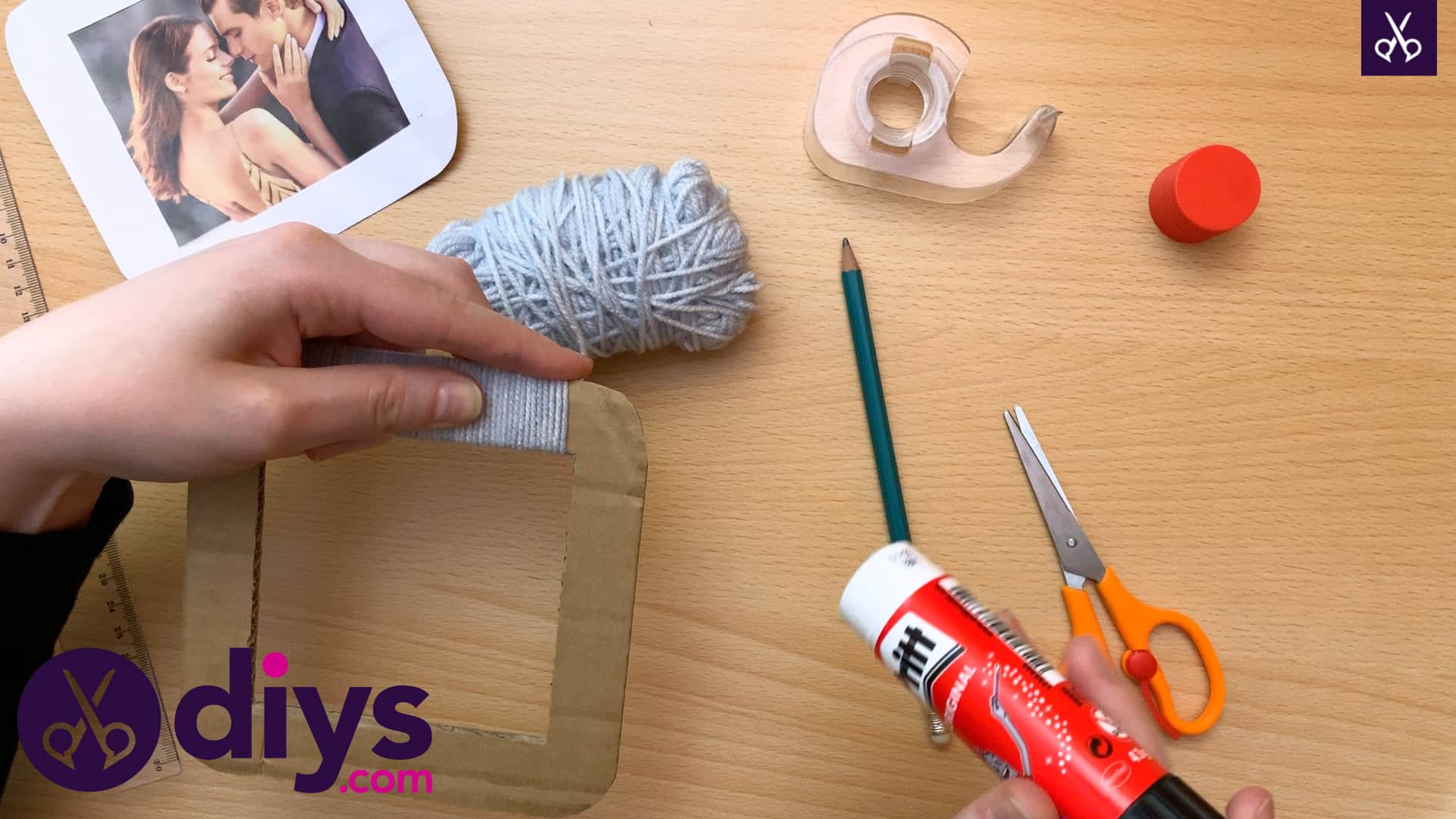 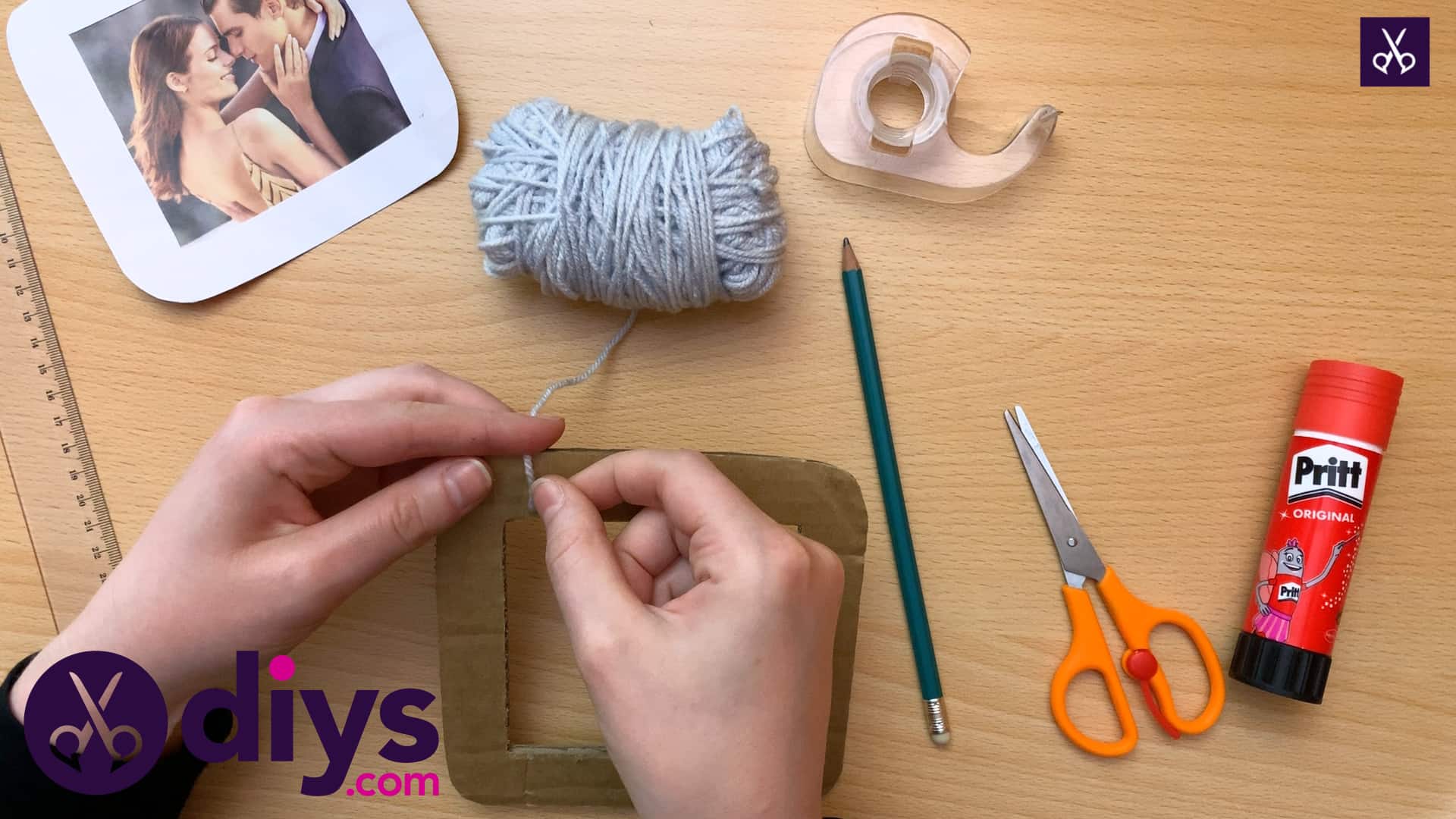 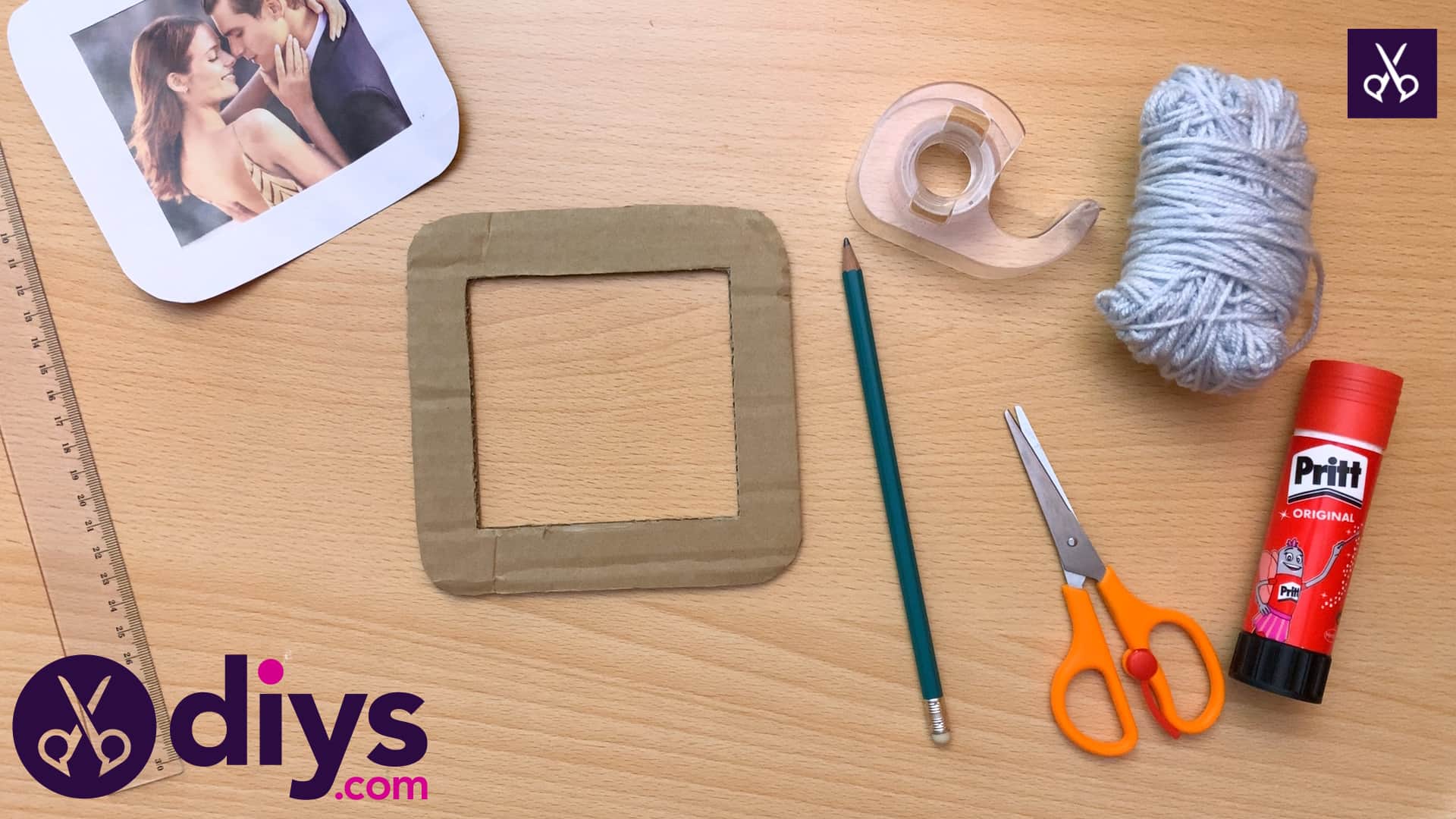 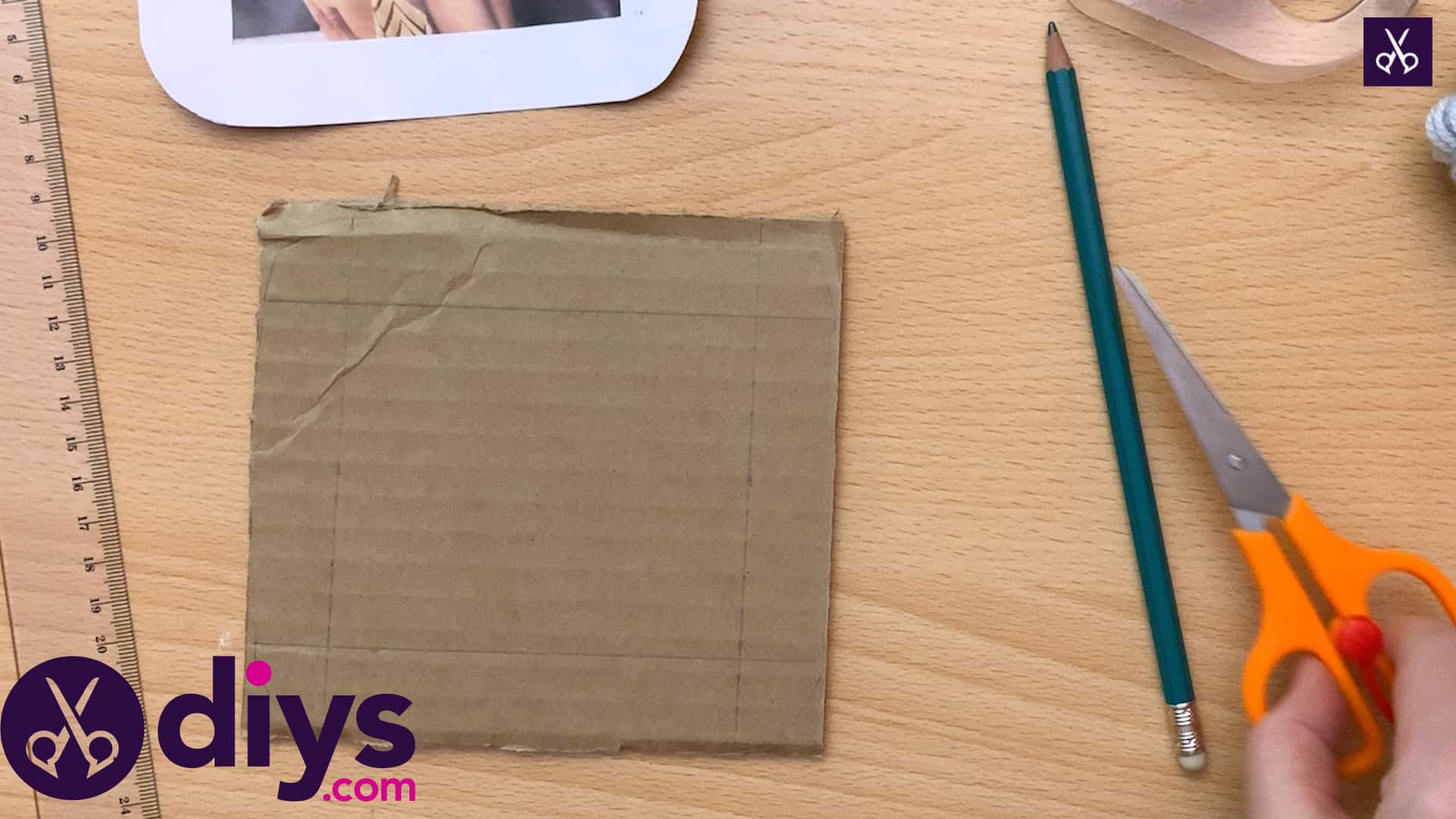 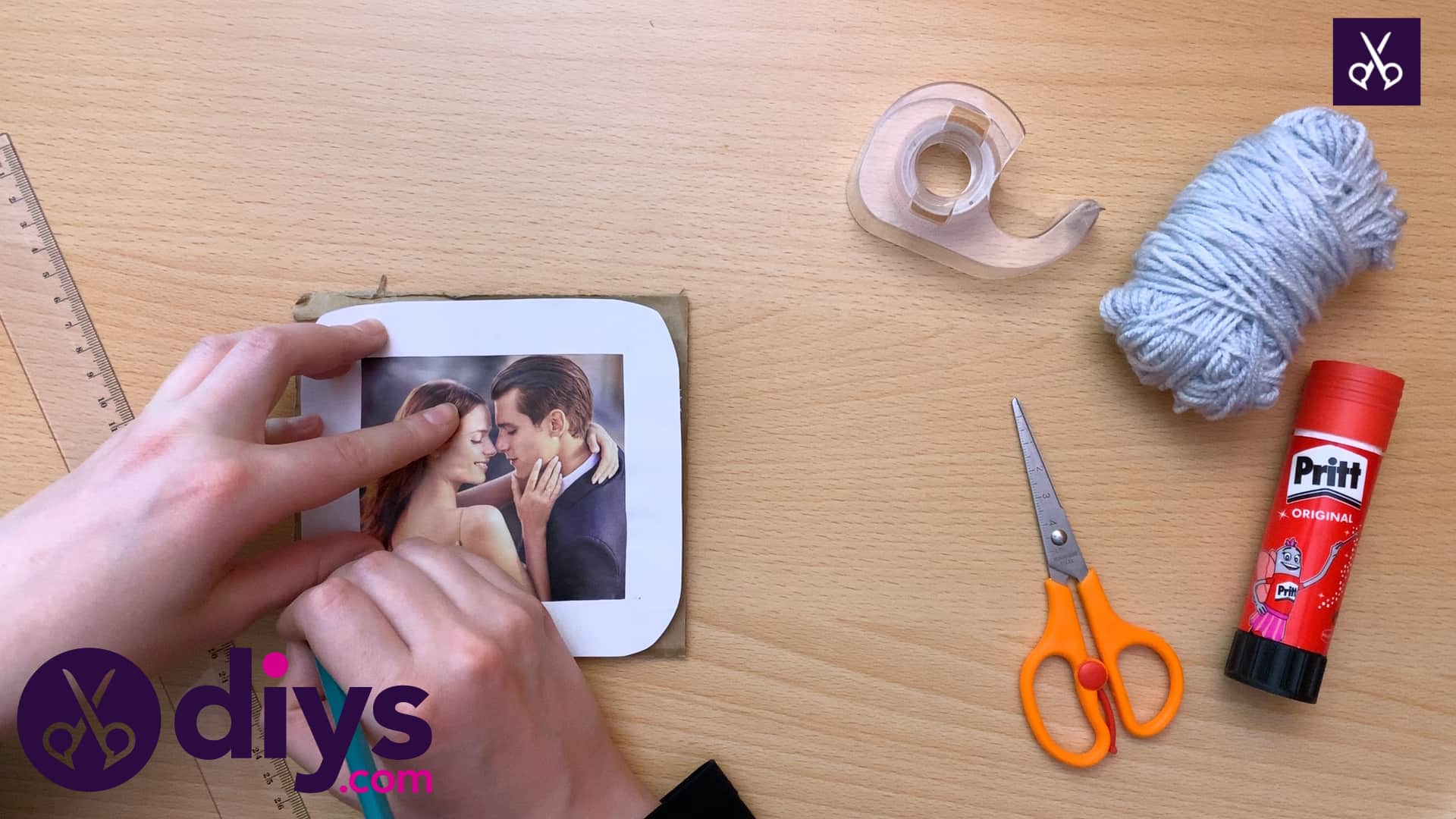 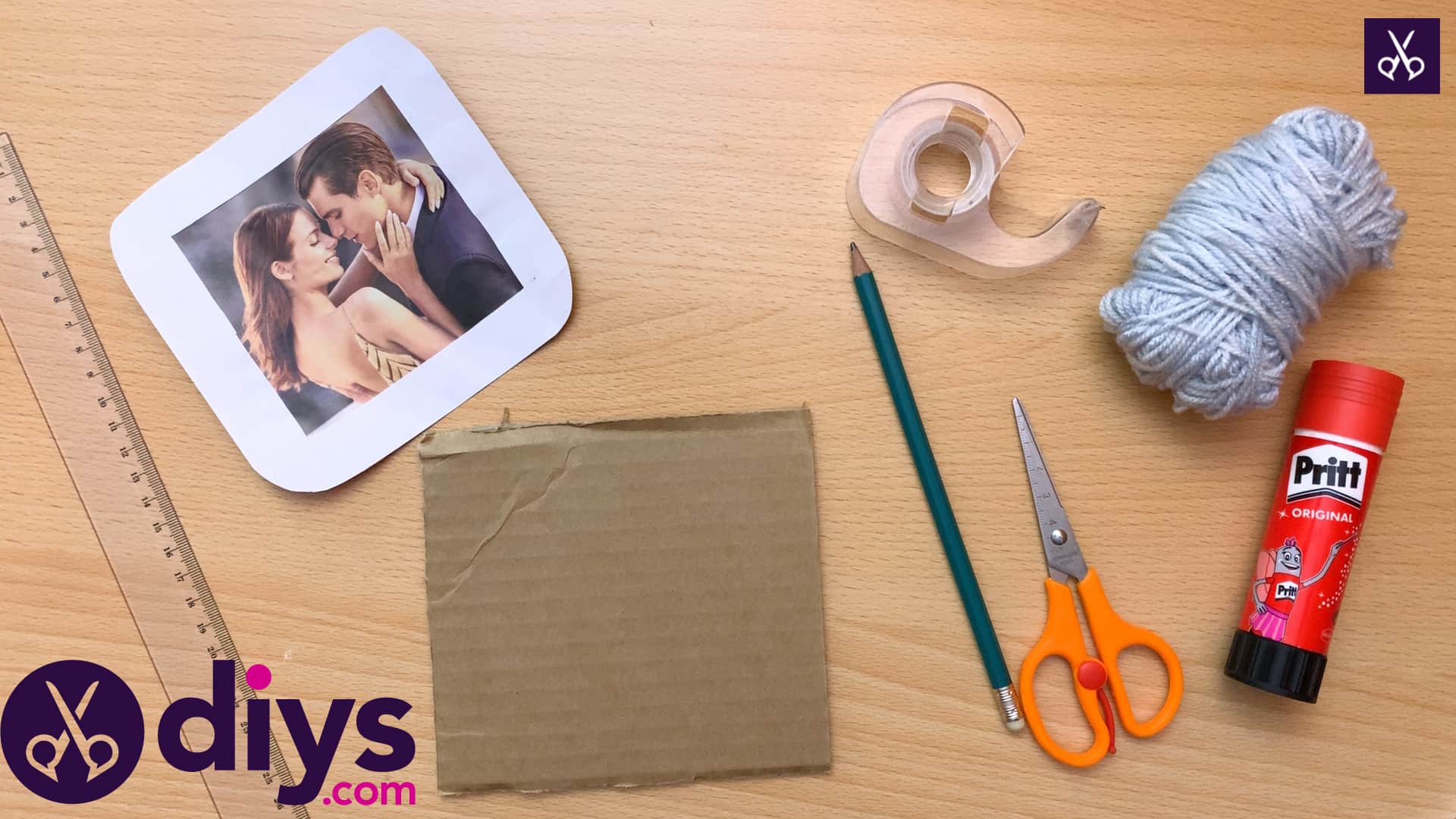 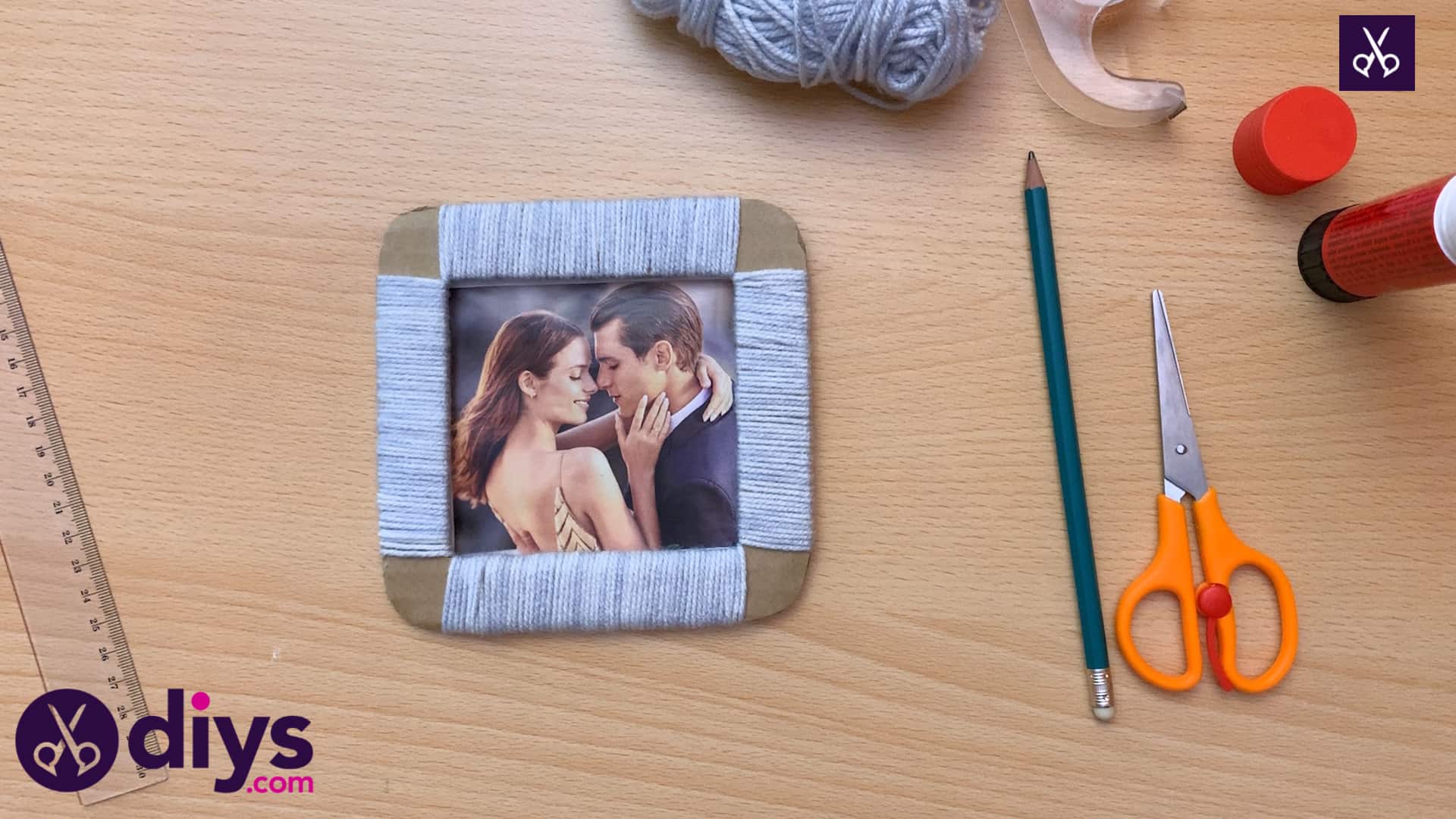 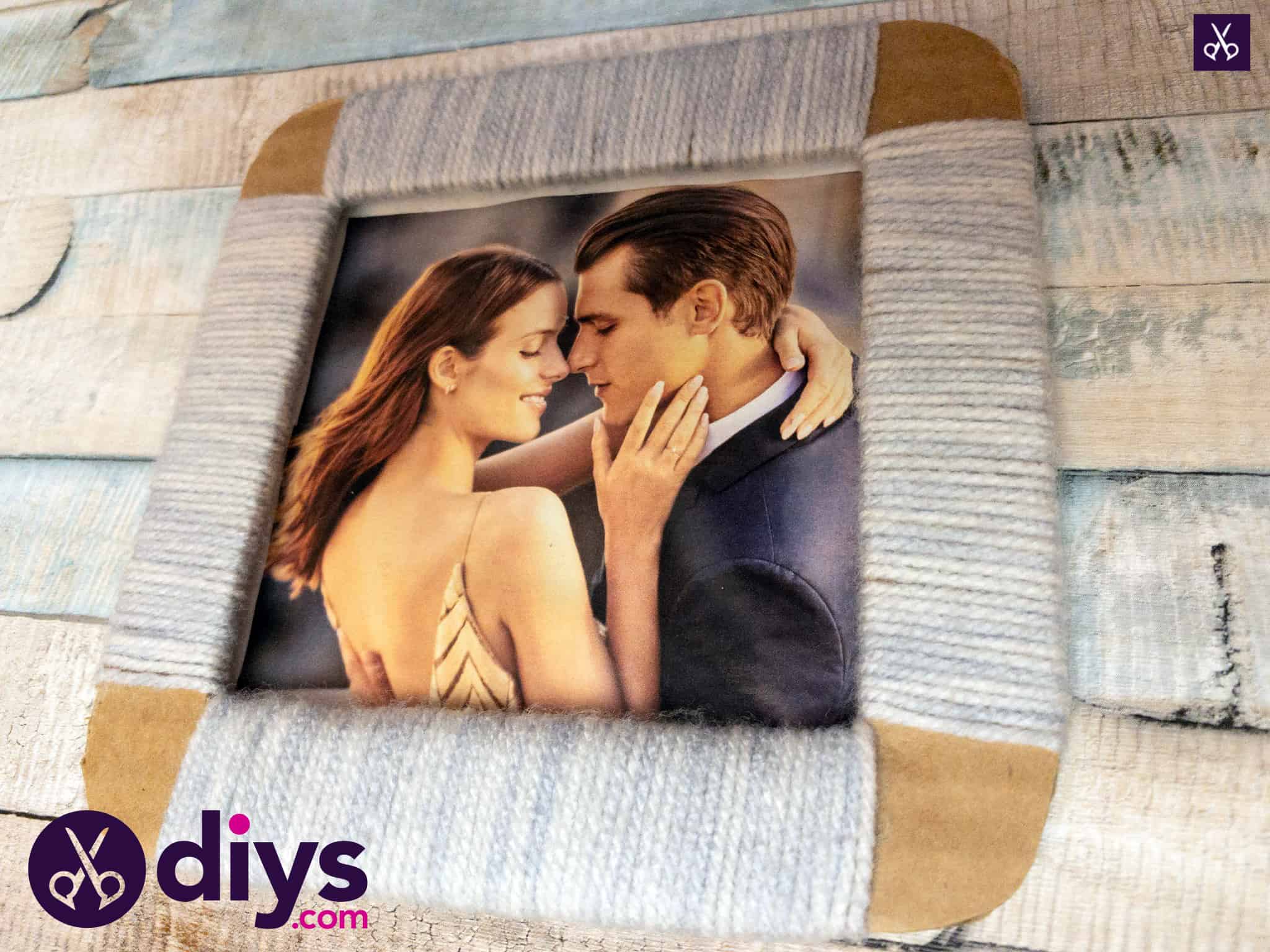 If you’re the kind of nostalgic crafter who adores making creative ways to display your favourite photos and family memories, then we think you’ll get just as much of a kick out of this fantastic yarn wrapped cardboard picture frame as we did! It’s a simple, kid-friendly way to show everyone who visits your home just how much certain photos mean to you. 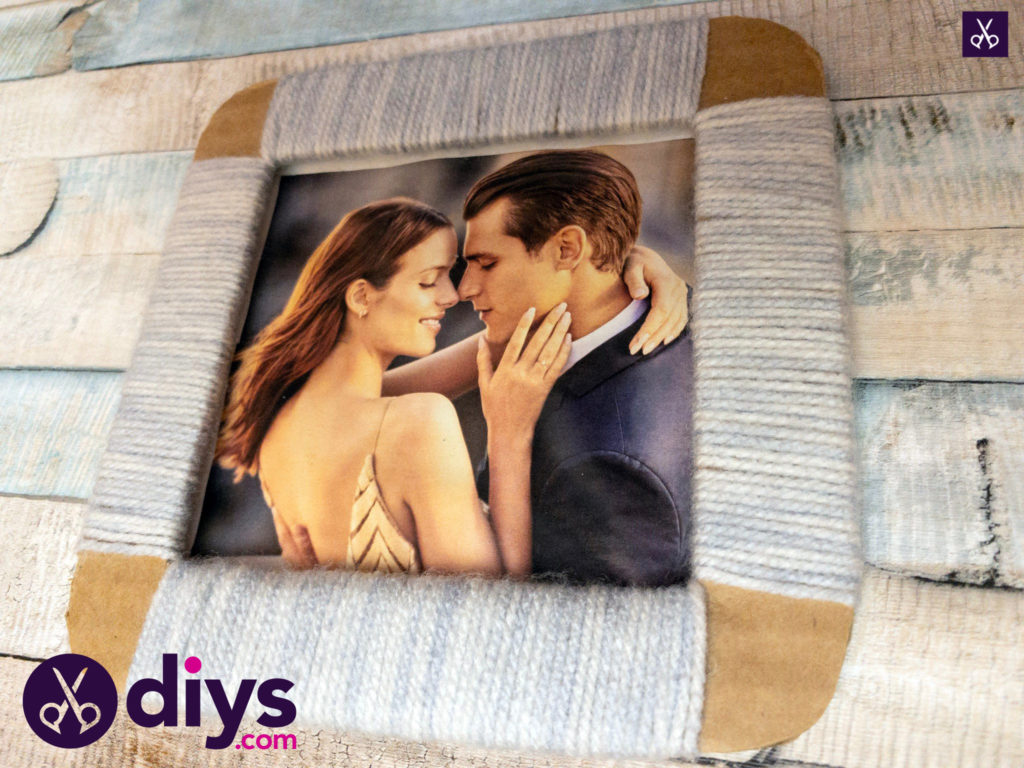 In this tutorial, we outline the process of cutting out a cardboard photo frame and adding colour using yarn wrapping techniques! You’ll also find a detailed video tutorial at the end of this post, just for extra guidance. 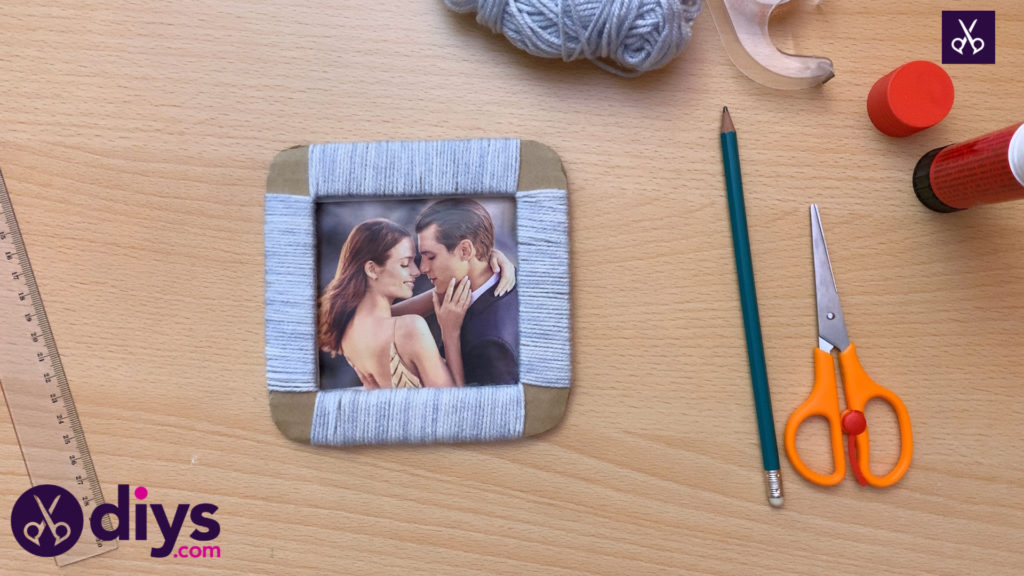 Gather your materials! This project will work whether you professionally print your photo or do so on your home printer. It does work best, however, with a square shaped photo.

Make marks on the cardboard even with the edges of your photo, where the image actually starts. You’ll use these marks to trace out a square in the proper size, which is where you’ll actually cut out the centre of the frame. These marks are your first basic guideline! 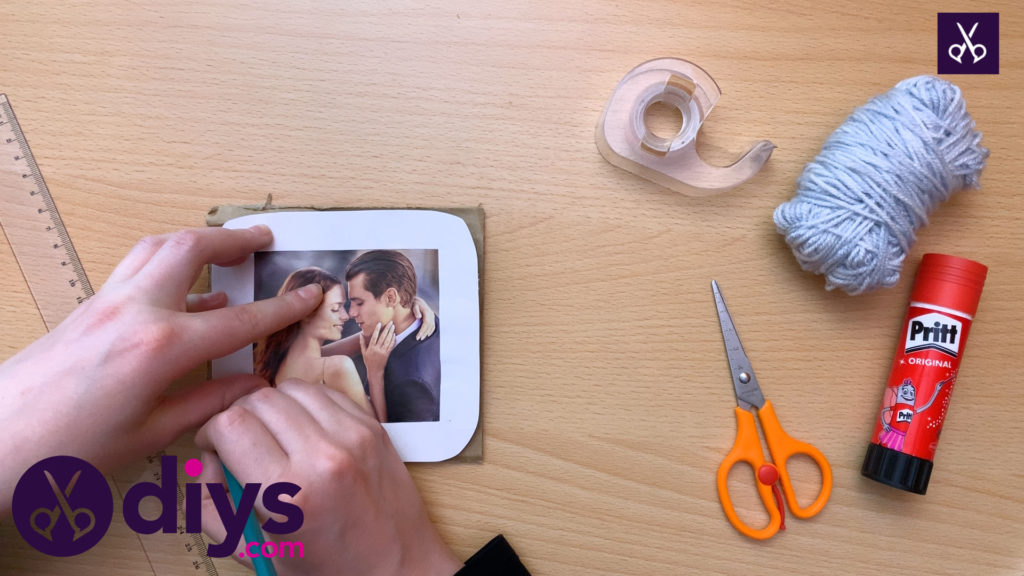 Using the marks you made in step 2 as a guide, use your ruler to join them with straight lines, creating a square in the centre of your cardboard that’s perfectly shaped for your image. 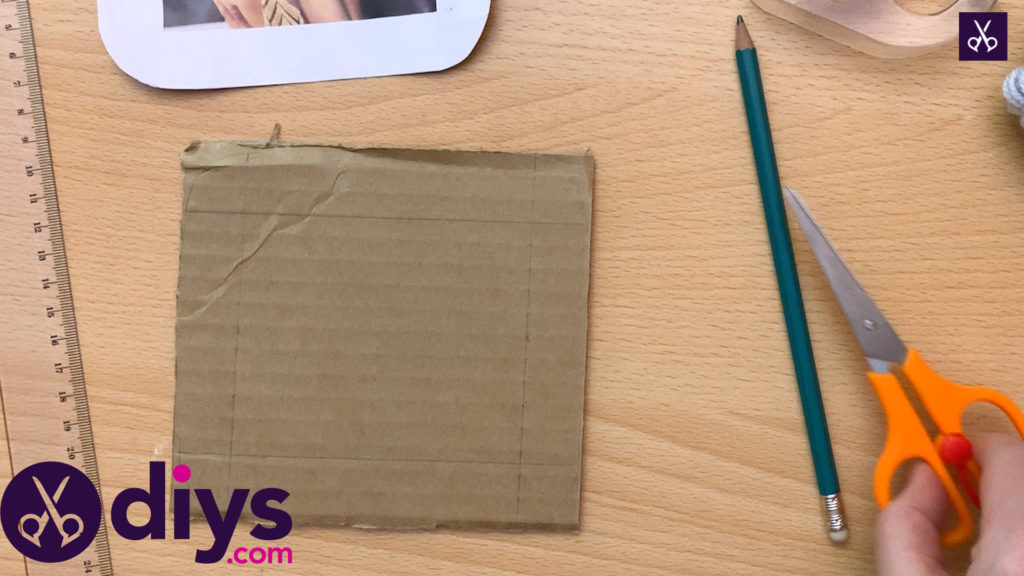 Use your scissors to cut out the square, leaving you with a cardboard edging that has a well-sized hole in the middle where your image will sit perfectly. 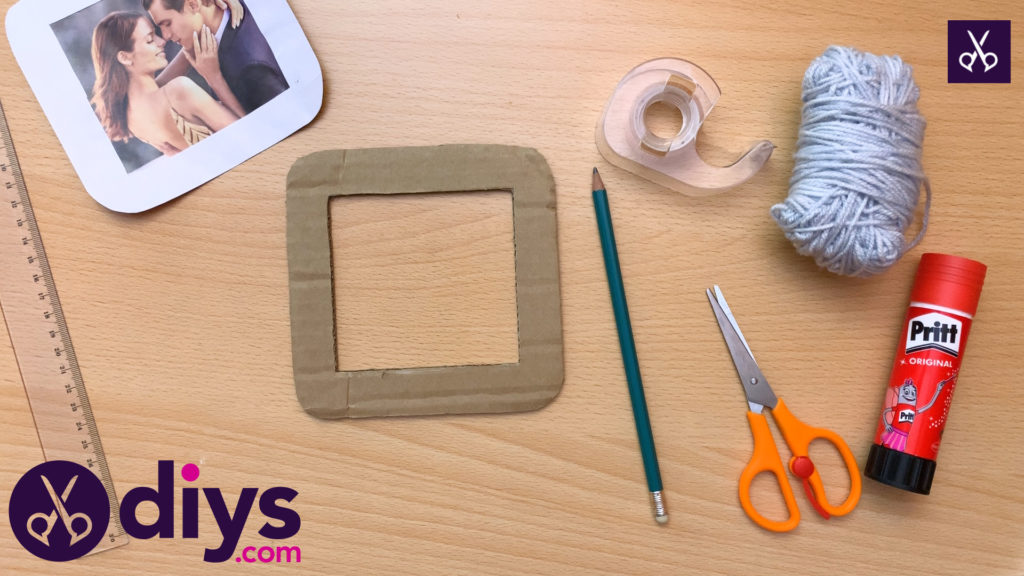 Tape down the edge of your yarn, anchoring it so that you can start wrapping. The spot where you tape the end will be the back of the frame. 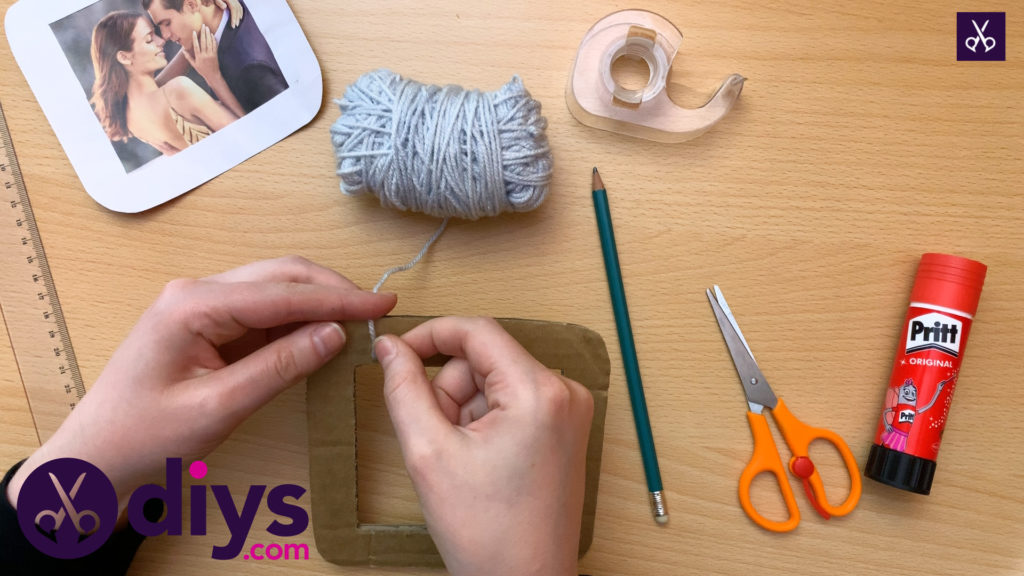 Pass your ball of yarn through the middle of the squired hole, winding the yarn around the cardboard edging over and over. You’ll move the yarn to the side slightly each time you pass the ball through so that it covers all the way along the edge, but wind tightly enough that the pieces of yarn lie against each other, rather than leaving bare cardboard in between. 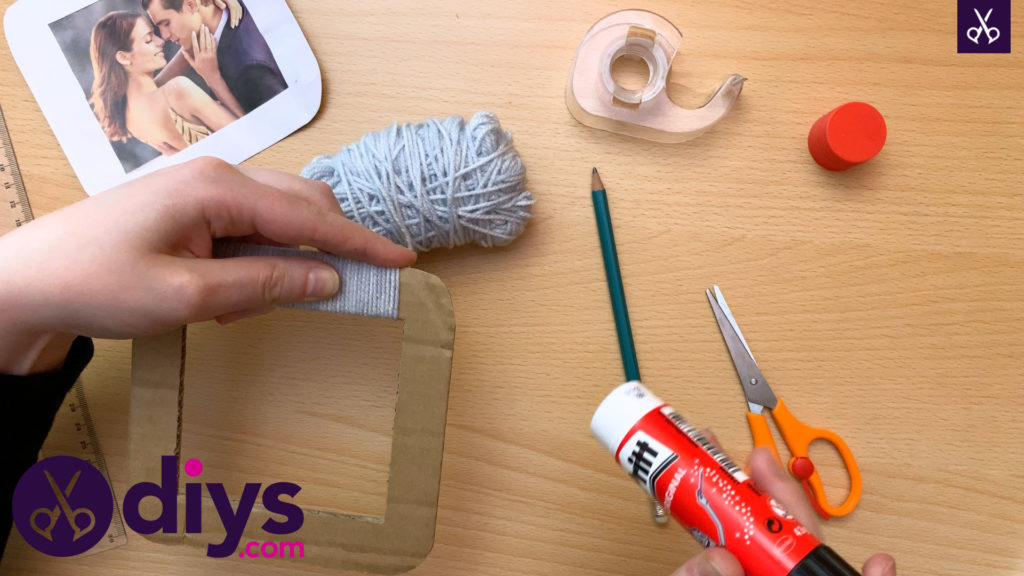 Once you’ve finished yarn wrapping one side of the cardboard edging, start another! We chose to skip winding on the corners for a bit of colour and texture contrast, but also because you’ll do some gluing here later; it was a practical choice as well. Cover all four edges with your yarn wrapping technique. Once it’s all covered, cut the yarn, cover the end in glue, and tuck it under the yarn around it on the back side, pressing down so it sticks there and doesn’t unwind. 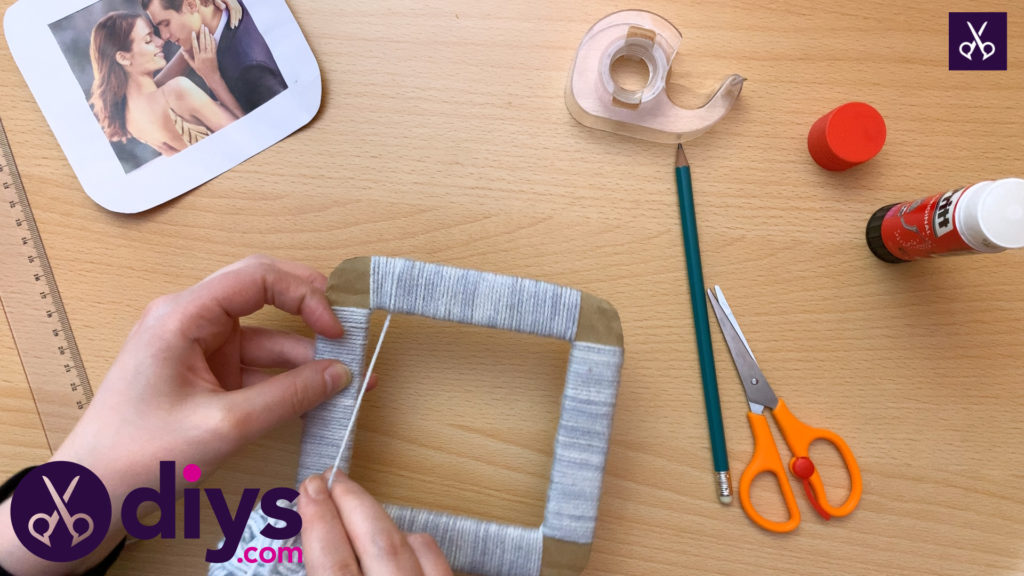 Glue your photo into the frame! Put some glue in each of the four corners in the blank paper space around the image. Line these up with the four cardboard corners that you did not yarn wrap and press down so the photo sticks and the image is lined up with the space. Voila! 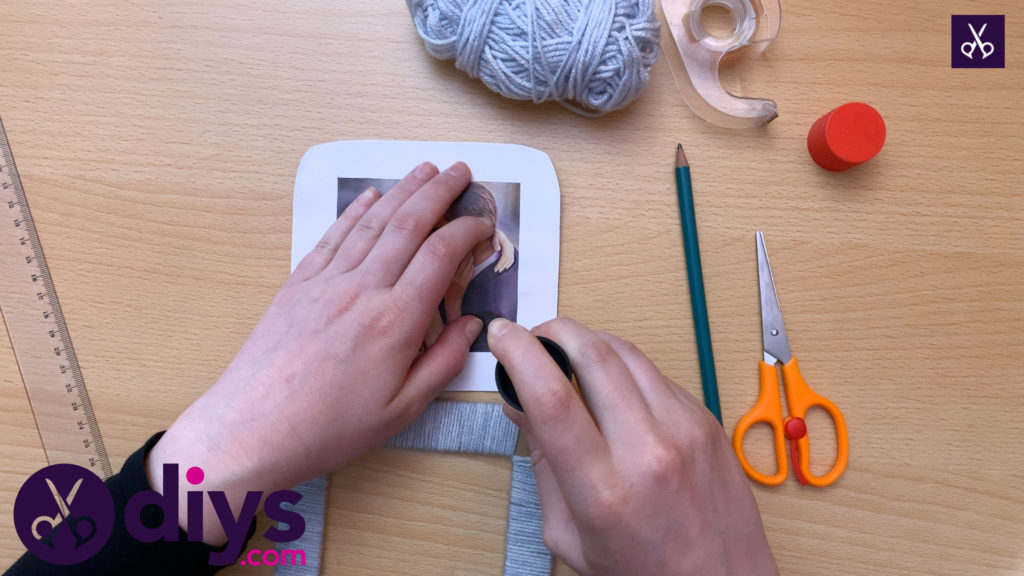 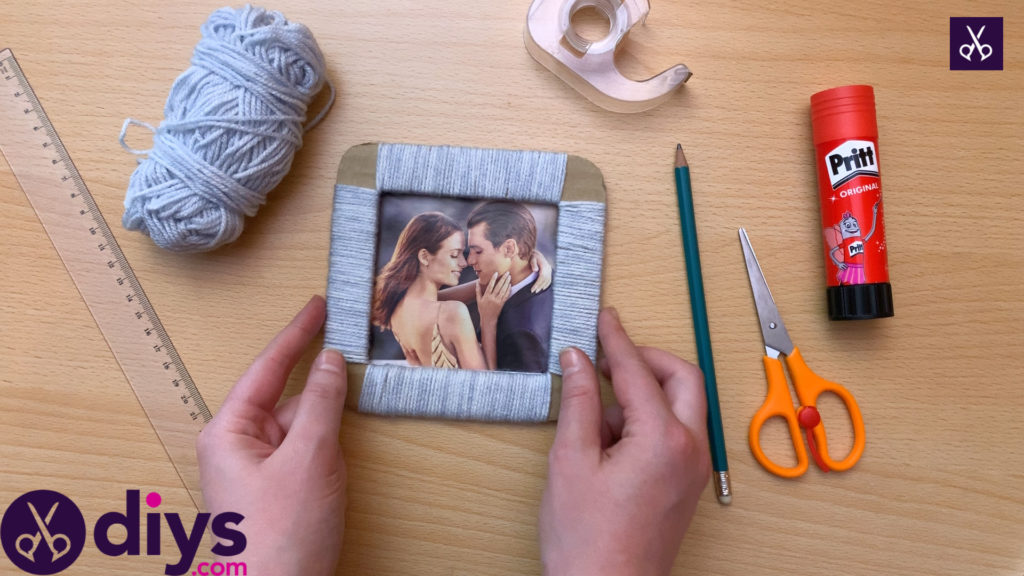 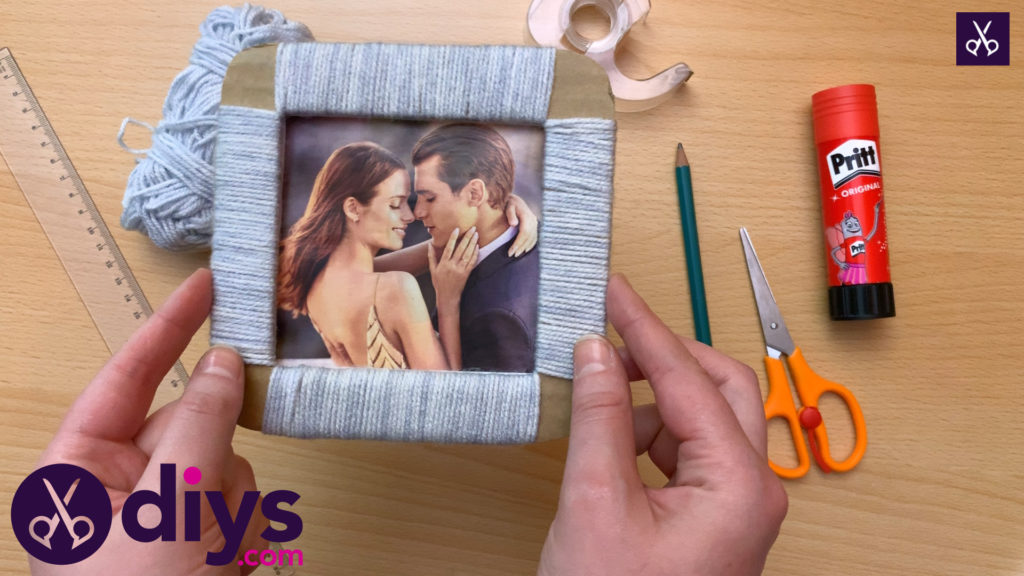 We love the idea of creating this wrapping effect using yarn in a colour that complements some element of your photo, making the whole project look custom and complete! 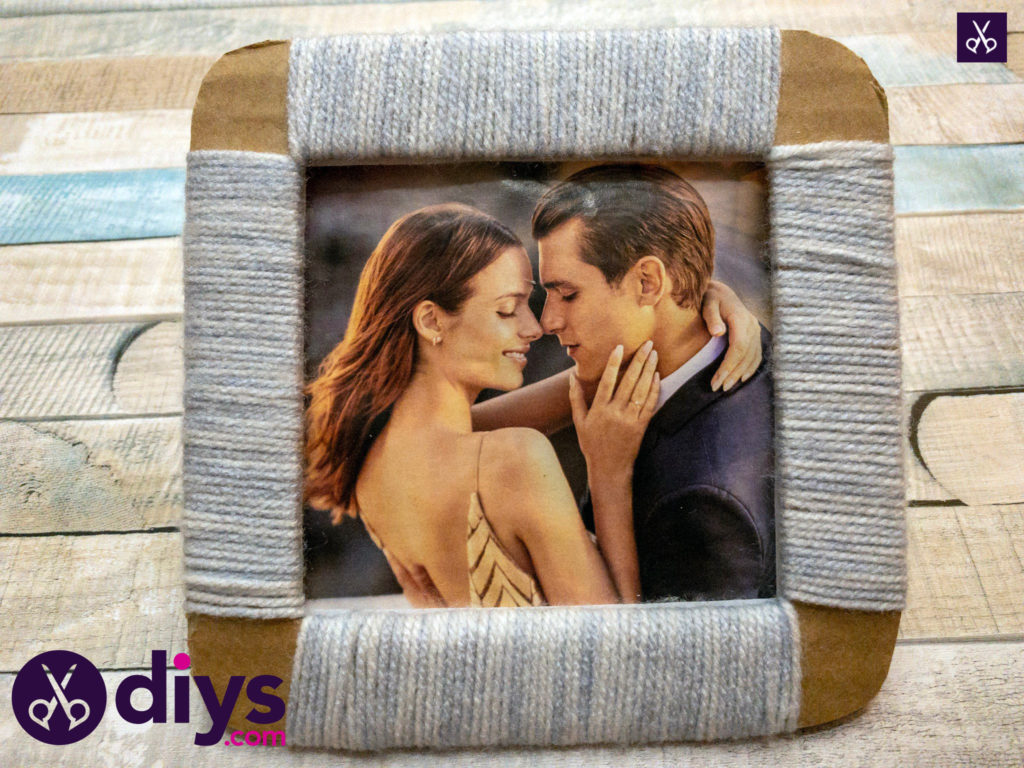 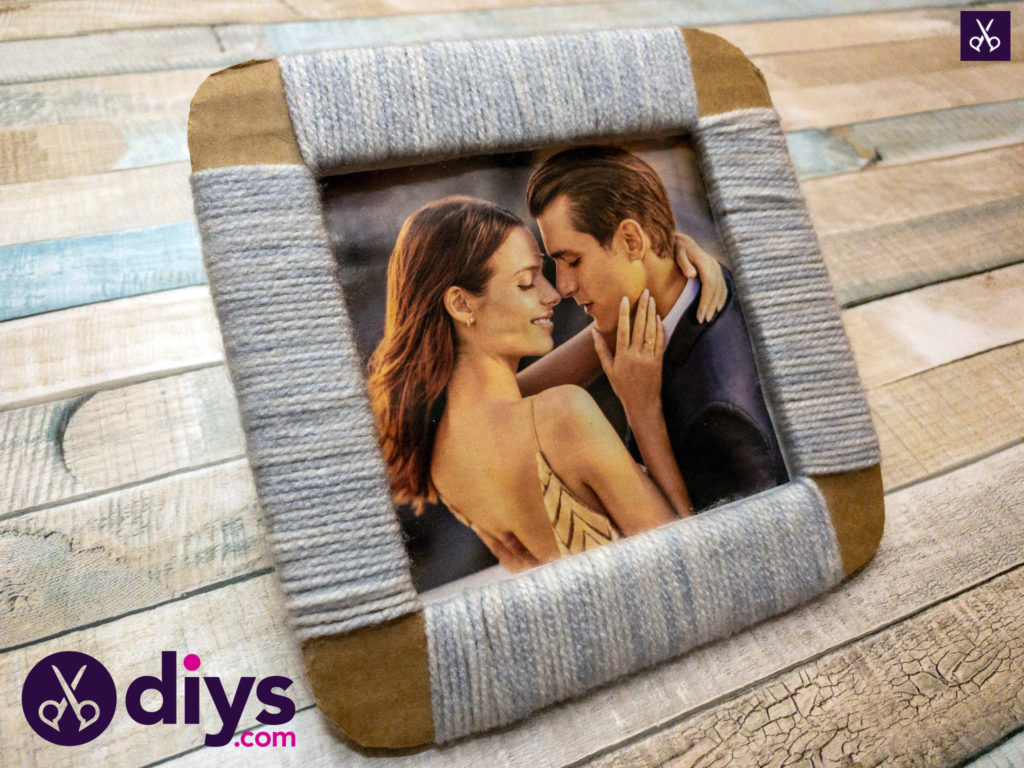 Find a full video tutorial for this awesome project here! 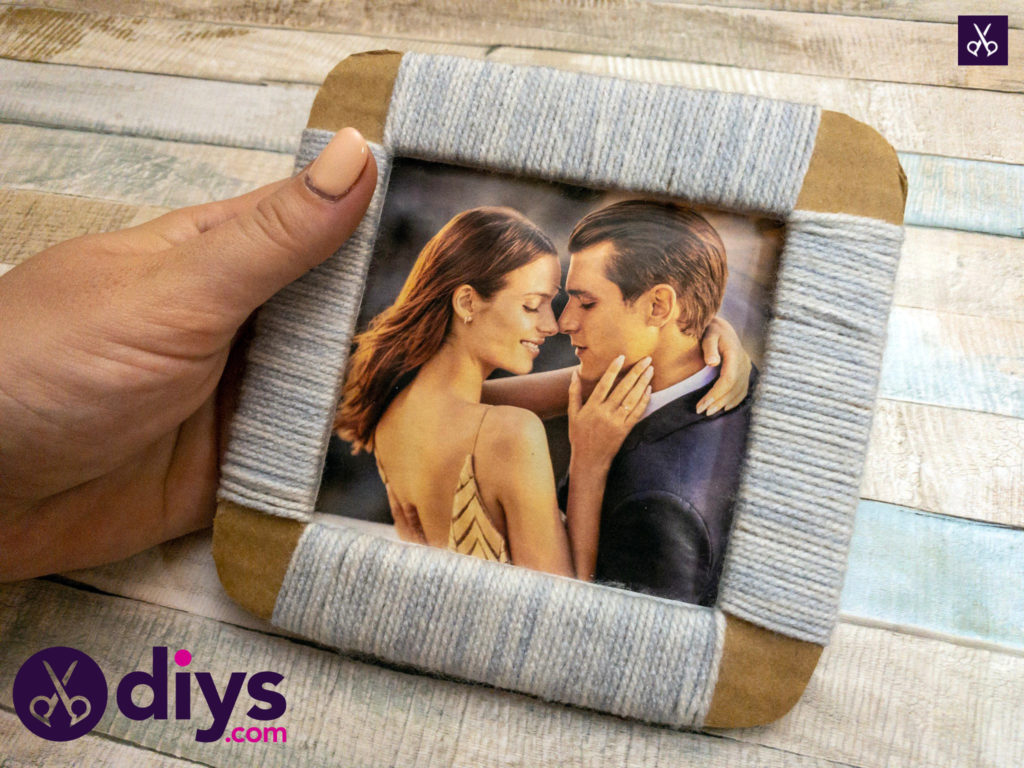