It’s not unusual for a perennial herbaceous plant like astilbe to be the darling of every flower bed. Its ornamental properties are after all beyond doubt and the plumes of flowers stand tall and demand attention from every human, bird, and insect. 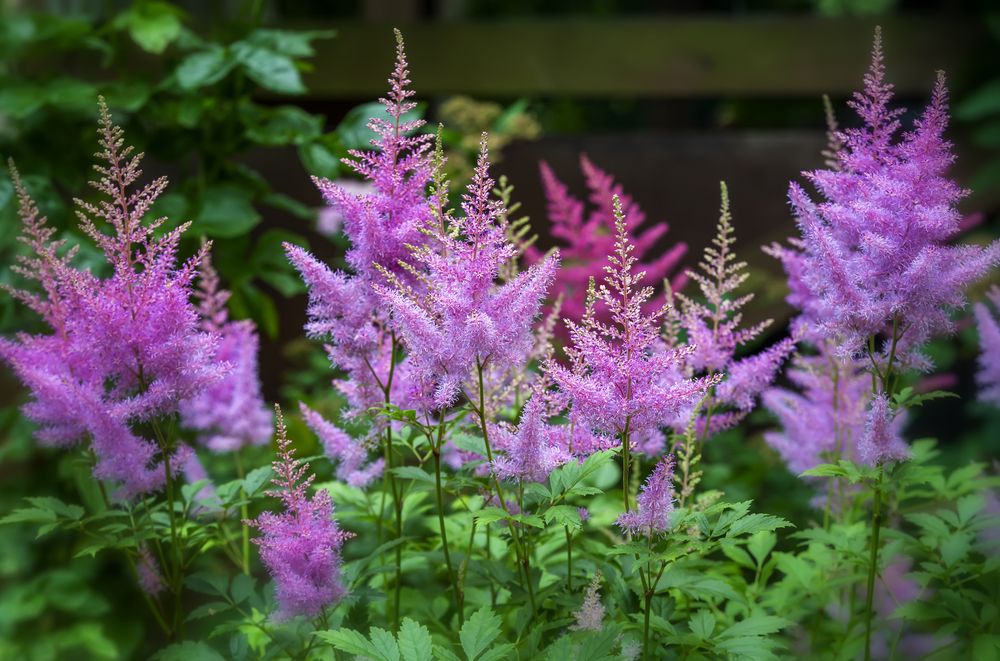 But what is unusual is that such a valued addition to any garden would have some belittling names as false goat’s beard or false spirea. There’s nothing false or pretentious about the astilbe. The plant is pure beauty and is as genuine as any other flowering plant you grow in the garden.

So what did this decorative garden plant do to deserve such derogatory names? I guess we’ll never find out. But suffice it to say that growing astilbe in your garden is a delightful experience in every way. As you care for the dense foliage you develop a close bond with the plant and get to experience the joy of gardening at its best.

Astilbe at a Glance

Astilbe is one of the rare categories of plants that can actually grow in waterlogged soil. You’ll see it growing on the banks of ponds, creeks, and bodies of water. The wetter the soil the better for this hardy perennial.

Colorful is the first word that comes to mind when describing astilbe. And we’ll start with the leaves. They’re quite similar to ferns and their color varies between green and bronze. The small leaves form dense foliage that gives the plant its distinct look and charm. The flowers are quite unique as well. They rise like plumes and vary in color from deep red to pink, purple, peach, and white. Each plume is an aggregation of small flowers that grow in clusters and assume this unique shape. You can use the flowers in floral arrangements as well as dried floral creations.

Native to eastern Asia, astilbe is cherished in suburban gardens in Japan and Korea. Its compact size makes it ideal for both garden beds as well as containers and planters. The average size of the mature plant is between 24 to 36 inches high and 18 to 24 inches wide. That makes pruning redundant.

The bloom time of the astilbe varies depending on the variety you grow. Some early cultivars will start blooming in the early spring. Others will only flower in the fall. So growing a bunch of different cultivars can give you blooms from the spring all the way to the fall every year. 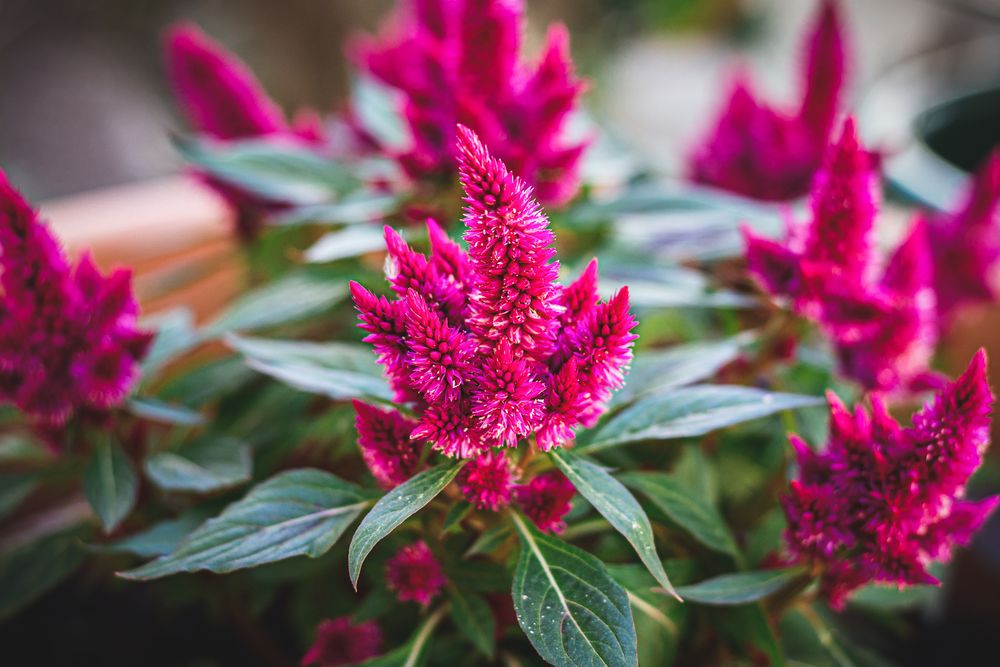 It was the Greeks who first gave this delightful plant its name, astilbe. The word means “without brightness.” It seems that the varieties of the plant that used to grow in ancient Greece had lackluster foliage and blooms. But more varieties have been developed every since and the new cultivars are showy and breathtaking, to say the least. Here are some cultivars to consider.

How to Grow Astilbe

Astilbe is a hardy perennial that grows mainly in zones 3 to 9. The only requirement for the plant is constant water. Since you cannot keep up with the water demands, it’s recommended that you plant it in a spot in the garden where the soil stays wet all year round. You can start the plant from seeds or a cutting. I highly recommend using a cutting or buying a small plant at the local nursery. Seeds can be quite unpredictable as far as growing cultivars are concerned. 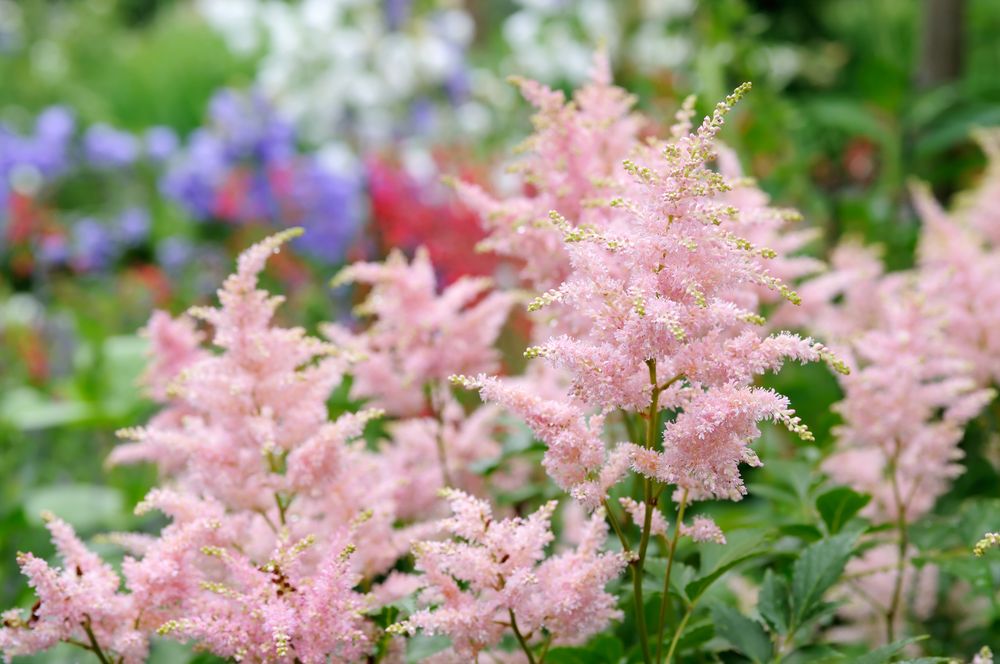 Water is by far the most crucial element for the success of the astilbe. Even those varieties that can tolerate drought won’t last long if you treat this as any other plant in your garden. And as a perennial plant, some pruning is required just to keep it in good shape as it gets on with years.

Although the best soil to retain water and is more likely to get waterlogged is clay, you shouldn’t plant your astilbe in heavy soil. The compact soil makes it difficult for the roots to develop and spread out. Sandy soil on the other hand drains water faster than the roots can absorb the moisture. Amend both sandy and clay soil to get it close to loamy soil. For sandy soil add some clay and for clayish soil, add perlite. Top off with plenty of organic materials to feed the roots slowly. The organic materials also retain water better and take a long time to break down. Test the soil beforehand and make sure the pH levels are around 6.0.

It can be challenging to keep up with the water demands of astilbe. This perennial needs the soil not just to be moist but thoroughly wet. Waterlogged soil during the spring and summer is just how this plant likes it. So how will you achieve that? You can start by choosing a spot that is always wet and never dries out. If the garden faucet is leaky, then you’ve got the right spot. If you don’t have such a wet spot, install a water drip system to keep the plant hydrated and the soil wet. Remember to switch off the dripping when it rains. In the fall and winter, the plant will not need as much water.

Another advantage to growing astilbe is that it can tolerate full shade and dim light. This will come in handy since that wet patch in your garden most likely doesn’t get any sun at all. But there’s no reason that you can’t grow it in partial shade or even full sun. As a hardy plant, astilbe is quite adaptable and will tolerate different light conditions. So you can reserve the sunny spots in the garden for the veggies and flowering plants that crave the light.

Astilbe’s appetite for water is only matched by its hunger. This is a plant that thrives in rich and fertile soil. The more organic materials, aged manure, and rotten leaves you dump in the hole with the roots the healthier the plant grows. You won’t need chemical fertilizers here and side dressing with organic compost should be enough. Apply the plant food once every 3 weeks from the early spring until the end of summer. When the last flower has faded, you can stop feeding the plant. 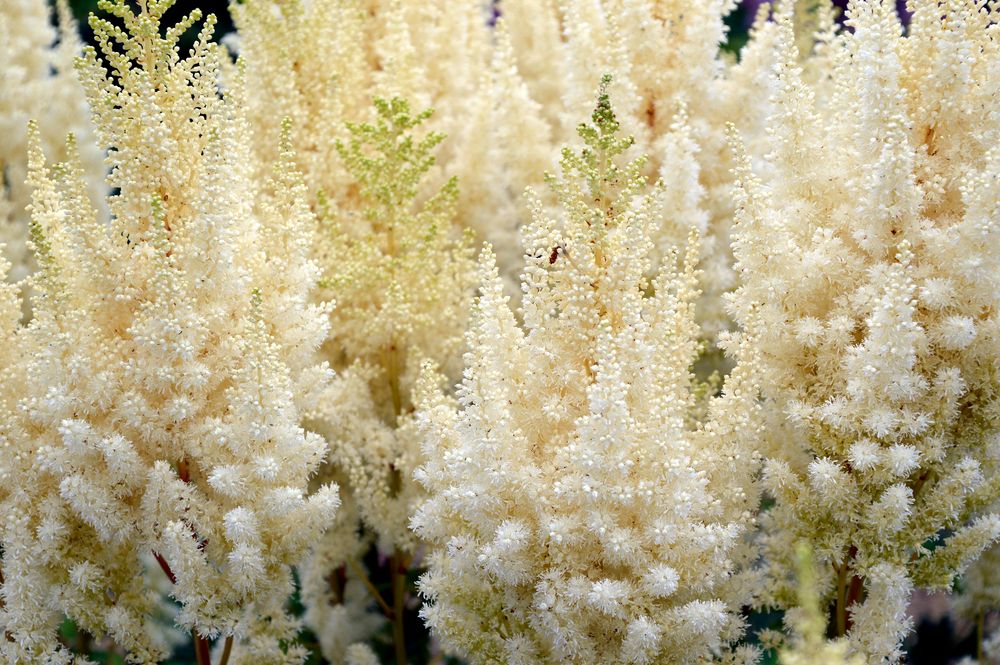 For many plants, mulching is a way to help suppress weeds. But in the case of astilbe, mulching is just another way to keep the moisture in the soil and prevent it from drying out. Mulching also helps keep the crown of the plant under the surface. Astilbe tends to pop above ground which makes the crown lose moisture and shrivel. So before you apply the thick layer of mulch, press on the crown to push it back under the soil then cover it with the mulch. When the mulch comes in contact with the wet soil it will disintegrate and rot much faster. So use organic materials that will not increase the acidity of the soil when they break down. Avoid letting the mulch touch the crown or base of the plant since that could trigger fungal infections.

Because astilbe is a small and compact plant, you won’t need to prune it heavily. But as is the case with many perennial plants, it could get out of shape quickly unless you trim it off. The best time to prune is in the fall after the flowers have faded. Deadheading is not necessary either since the plant will not replace the lost flowers with new ones. But if you don’t want the seeds, you can cut the flowers as soon as they shrivel and fade. Remove dead and damaged branches to encourage new growth.

You won’t have to worry a lot about pests or diseases interfering with the growth of the plant. Astilbe is one of those plants with no natural enemies and healthy resistance to most diseases. But in the first year when the plant is young, wildlife will feast on the young shoots. Rabbits, in particular, can strip the plant of tender stems and young leaves. This could impact the plant’s growth and shape. You would need to cover it with chicken wire at least for the first year until it has grown bushy.

Astilbe Growing Problems And How To Solve Them