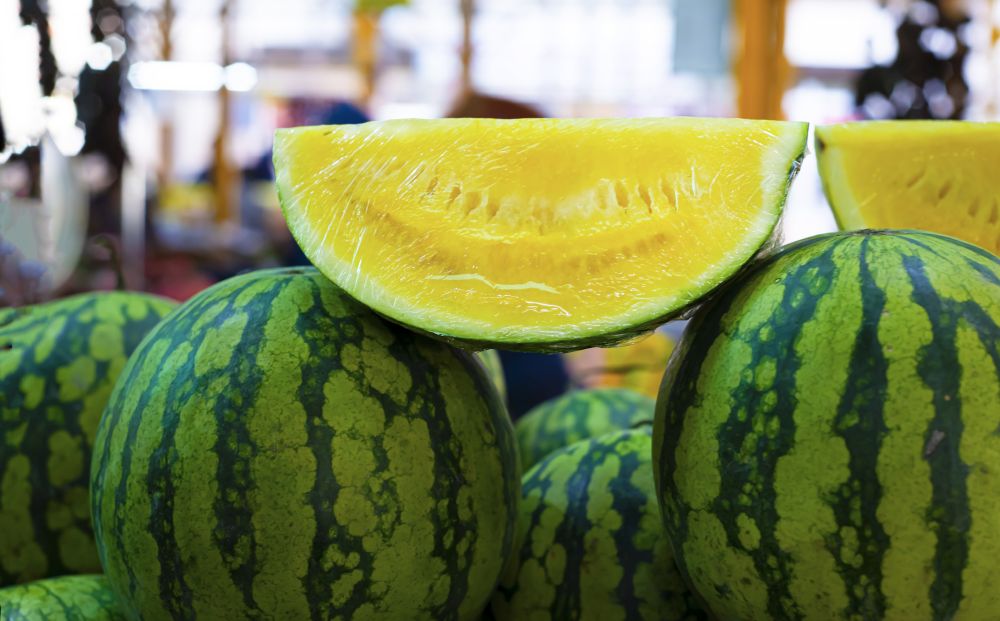 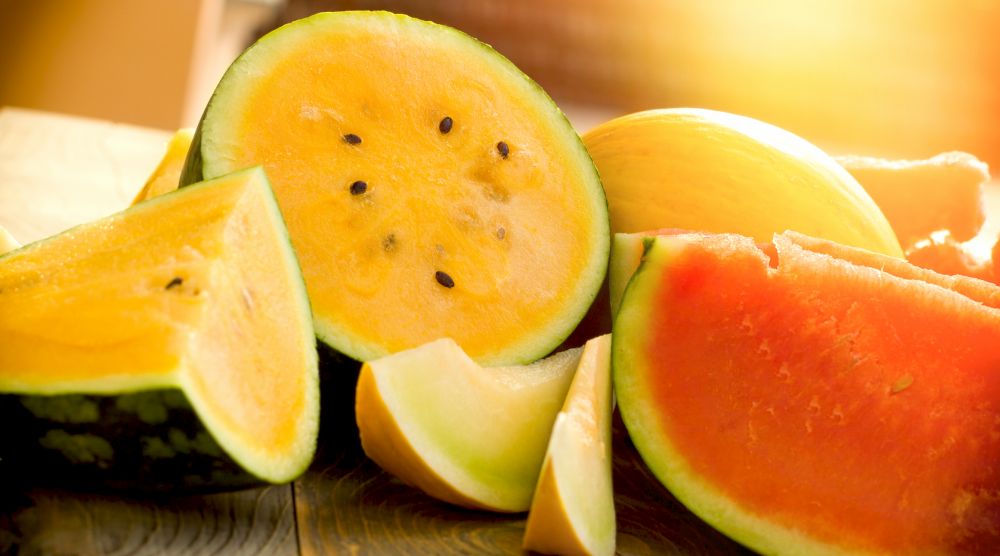 Yellow watermelon or red? It’s more than just a matter of taste or personal preference. Despite the ubiquity of red watermelon, yellow watermelon still holds many health and flavor advantages that would tickle your taste buds. All in all, it’s an intriguing watermelon variety worthy of having a place in your garden. 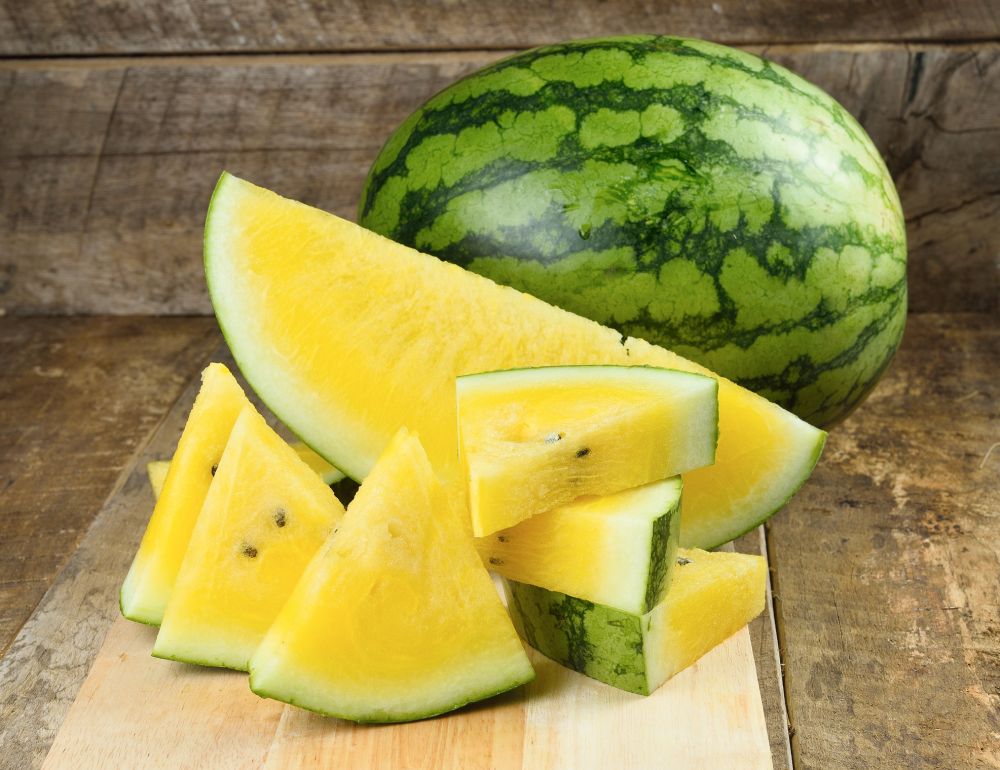 If you have grown any variety of watermelon, then you won’t have trouble growing the yellow crimson watermelon plants. They take just about the same amount of care and need extra attention when it comes to pollinating them. Moreover, you can grow them on mounds, vertically, or in containers. So you really have a lot of options here especially when you don’t have enough space to grow the sprawling watermelon vines. But before we get to how you can grow it and what varieties to choose, we need to know what makes yellow watermelon stand out beside its yellow flesh.

Yellow Watermelon at a Glance

At first glance, yellow watermelon vines (Citrullus lanatus) look almost identical to their red cousins. The leaves, flowers, and even fruits look the same. The real surprise is when you split the green orb open only to discover yellow or yellow crimson flesh instead of the regular red one.

The seeds are also the same black ones with a hard shell. And that poses a problem when buying watermelon seeds online. You won’t know for sure you’ve got your yellow watermelon seeds until the fruits are ripes and lie halved on your kitchen table. All the more reason to get your seeds from reputable sources.

As an annual, the vines of the yellow crimson watermelon grow to about 10 feet tall. That calls for a trellis to grow it vertically if you don’t have enough room for this giant vine in your veggie patch. A native of Africa, this species is suitable for almost all hardiness zones.

If you like to eat your yellow watermelon as an occasional snack on a hot summer afternoon, you might want to reconsider that. The more you eat this delicious and healthy fruit, the better your health will get. That’s because it’s packed with minerals such as magnesium, iron, and phosphorus. In addition, it has decent amounts of vitamins A and C. A healthy daily dose of the crimson crisp melon can bring about the following health benefits.

With all of these health benefits, you might expect yellow watermelon to be more popular and have plenty of cultivars. However, red watermelon still reigns supreme over the hearts and palates of consumers. Still, there are a few varieties you can choose from.

How to Grow Yellow Watermelon

To avoid disappointment, the best way to get your hands on yellow watermelon seeds is from the ripe fruit itself. Cut a sweet watermelon of the variety you like and pull out the seeds. Wash them and make sure they are healthy. Any seeds that look flat or have unusual shapes should be discarded. Wash the seeds and dry them on a paper towel. Now you’re ready to start your yellow watermelon veggie garden.

While growing yellow watermelon vines on mounds and hills is easier than growing them vertically, you still have to contend with pests and diseases and getting water to the roots of the vines without sprinkling the leaves and vines. Ventilation also becomes an issue since high humidity triggers fungal infestations.

Yellow watermelon vines prefer rich soil that is loamy, well-drained but still has reasonable water retention capabilities. This is one of the main reasons you’d want to grow the vines on mounds instead of in rows. The slopes improve the water drainage and allow you to turn the soil upside down. The soil pH should range between neutral to slightly acidic. Anything between 6.0 to 6.8 is good. If you have sandy soil, then you won’t need to plant the watermelon on hills or raised beds. But the advantages of such structures outweigh the drawbacks and still require less work and care than growing the vines vertically on a trellis.

Since they need full sun, you’ll need to select a spot that gets between 6 to 8 hours of sunlight per day for your yellow watermelon plants. Plan your schedule so that the vines grow, flower, and fruit during the summer months. The seeds require the soil temperature to be around 70 degrees Fahrenheit to germinate. And the vines cannot tolerate any temperature drop below 65 degrees. This leads to the fall of the flowers. Excessive heat is also undesirable. So if the temperature hits the 90s, the chances of having a good yellow crimson watermelon crop this year would drop.

Yellow watermelon just like any other melon requires a lot of water. You’ll need to give it between 1 to 2 inches of water a week depending on the soil condition and temperatures. That’s equal to between 16 to 32 gallons of water every week. The key here is to keep the water moist at all times. Watermelon vines have a low tolerance for drought and dry soil spills trouble for your fruits. Once the fruits grow to their full size and start to ripen, hold off the water. This increases the sugar concentration in the ripe yellow orbs. Don’t get the vines and leaves wet since that could spread infections and diseases.

If you’re wondering where the yellow watermelon gets its sweetness and flavors from, it’s from the rich soil. So you need to prepare the soil about six months in advance. Turn up the top one foot of the soil in the fall and mix it with plenty of aged manure and organic compost. Once the seedlings start to grow, feed them with organic compost or liquid fertilizer once every 3 weeks. If you’re using chemical fertilizer, aim for one rich in phosphorus to increase the flowering of the vine.

Both aphids and cucumber beetles attack the vines and leaves at an early stage. Get rid of aphids with a garden hose and pick the cucumber beetles manually and drown them in a bucket full of water.

As for diseases, Alternaria leaf spot, powdery and downy mildew, anthracnose, and bacterial wilt are the common yellow watermelon issues. So it’s worth it to plant disease-resistant varieties since some of these infections are lethal.

On average yellow watermelon starts to ripen from 65 to 90 days after you plant the seeds. For all intents and purposes, the ripe crimson watermelon doesn’t look any different than an unripe one. However telltale signs on the vines themselves are clues of how ripe the fruits are.

Take a closer look at the tendrils. If they’re still healthy and green, then the fruit is not ripe yet. However, if the tendrils have turned brown and are dying, then the harvest day is near.

Turn the watermelon a little and check the side in contact with the soil. If it’s turned from white to yellow then the fruit is ripe. And when you slap the fruit with your open palm, it will make a dull hollow sound. Once cut, yellow watermelons stop ripening, so if it’s not ripe, the fruit becomes inedible.

Use a sharp knife to cut the watermelon’s stem. You can store it for a few weeks in a cool place. If you cut it, then put it in the fridge and consume it within 4 days.

Watermelon Varieties To Grow In Your Garden