For some people, yarrow is more than a perennial to grow as a ground cover. The common yarrow has undeniable ornamental values, even if in some regions it’s considered an invasive weed. Those tightly packed clusters of flowers that come in various shades are just what you need to create stunning floral arrangements. 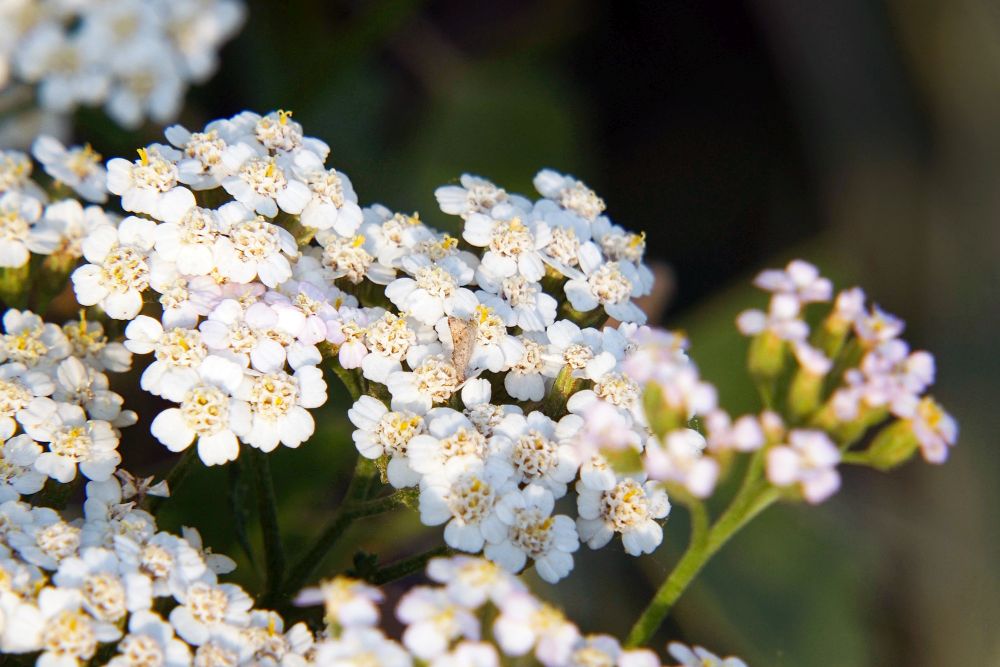 As for the plant itself, it does well in open meadows as much as borders, fences, and edges. Whatever landscaping purposes you have for the versatile yarrow, the plant is up for it. However, you need to keep in mind that it’s toxic for a wide variety of animals, including dogs, horses, and cats. So caution is required when growing the herbaceous yarrow in your garden. And with that out of the way, let’s get up close from a safe distance to this dazzling yarrow and learn how to grow and care for it.

Yarrow Herb at a Glance

Whether you call it gordaldo, devil’s nettle, milfoil, or old man’s pepper, yarrow (Achillea millefolium) is the one and same herbaceous perennial that grows widely in the temperate regions of North America, Europe, and Asia. It grows well in USDA hardiness zones 3 to 9.

On average, the mature plant grows one or more stems that reach anything between 8 to 40 inches tall. It all depends on the variety or cultivar you grow, as we’ll see later. However, no matter what cultivar you plant, you will always have wonderful and colorful flowers with a long bloom time.

By June, the first clusters of flowers open up. They contain many tiny flowers grouped together and vary in color from pink to white, yellow, and red. They are a magnet for many pollinators and emit a sweet and strong fragrance. The flowers stay in bloom until September giving you a wide window to cut and use them in your various indoor designs. 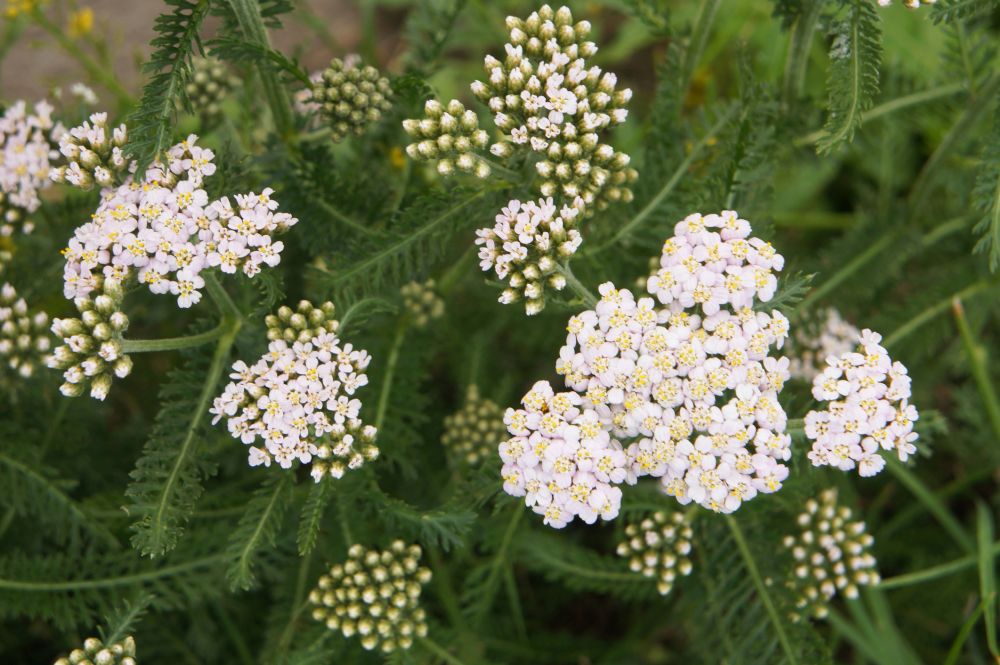 Despite the environmental hazards and health risks involved with yarrow, it still has many benefits that outweigh those risks. In fact, yarrow has been a part of both Greek and Chinese folklore, where it has gained an almost mystical reputation. But in your garden, yarrow has more practical uses and benefits.

Among its many benefits, the ornamental values of yarrow remain the number one reason many people grow it in their gardens. This might explain why there are so many cultivars with different flower colors and fragrances. Here are some of those cultivars to consider.

How to Grow Yarrow

If experience has taught us anything, it’s that hardy plants that grow in the wild are easy to start in your garden with little to no experience required. This is true of yarrow as well. The herbaceous plant has developed a reputation for being hardy and takes care of itself no matter what the weather or soil conditions are like. Here’s how to grow yarrow from seeds in easy steps. 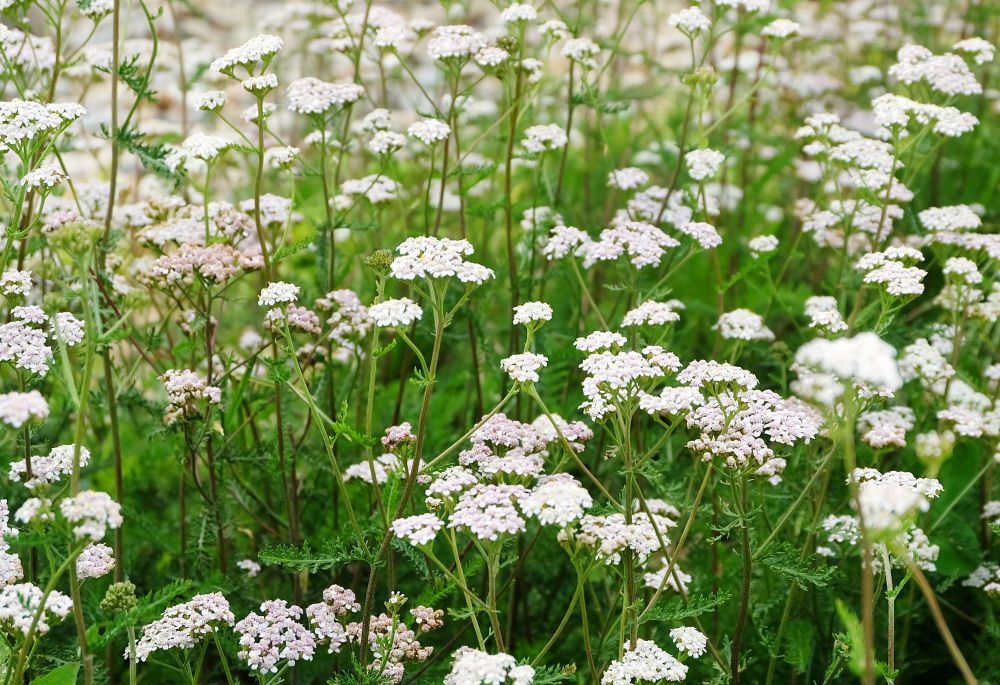 Once the seeds of yarrow start to sprout, there’s literally no stopping this vigorous perennial. It tolerates drought, heat, and even poor soil. For the most part, your job will be to keep the ever-spreading yarrow from growing beyond control.

Yarrow is not particular about what type of soil you grow it in. It does well in clay as well as sandy or loamy soil. As long as the soil is well-drained, you won’t have trouble growing this perennial. Experts recommend that you grow common yarrow in poor soil since it tends to become aggressive and even invasive in rich soil. As for the soil pH, the plant has a high tolerance for both acidic and alkaline soil. Levels between 4 to 8 are quite acceptable. In fact, and since the roots are famous for mining minerals in the soil, growing yarrow might fix the soil pH and bring it close to neutral levels.

Common yarrow favors full sun over full shade. You can get away planting it in partial shade. As long as the plant gets between 4 to 6 hours of sunlight a day, it will happily continue to grow and bloom in your garden. Light deprivation will impact its growth and reduce the number of flower clusters you get year after year. Signs the plant is not getting enough light include soft stems. The usually erect stems become floppy and require support to keep the flower heads up. As for temperatures, the hardy plant has a remarkable tolerance for both hot and cold temperatures.

The seeds of yarrow require constantly moist soil for them to germinate. But once the seedlings are above the ground and can support themselves, you can cut back on watering. In fact, it’s better that you allow the soil to go dry between waterings. Common yarrow is drought tolerant, and prefects dry soil to wet or waterlogged ones. If you get on average about one inch of rainfall a week, then you won’t need to water the plant at all. Otherwise, you’ll need to provide that much water on a weekly basis during the spring and summer. After the last flower has dropped in the fall, you can cut back irrigation by half.

Pruning, along with harvesting flowers, will be your main job as far as yarrow maintenance is concerned. The plant is known for its aggressive growth as its robust roots keep mining nutrients in the soil. If you grow it as a ground cover, then you’ll need to mow it between two to three times a year. Keep in mind that rich soil promotes faster and more vigorous growth. As for plants grown for their flowers, you can prune them once a year in the later spring. This will trigger the plant to grow sturdier stems that stand upright without support.

One of the perks of growing yarrow is the way it attracts plenty of pollinators and good insects. The upside here is that you’ll hardly find any pests crawling on the leaves and stems of your yarrow plants. Only aphids dare attack the plant. You can hose them off with a garden hose unless the other insects feed on them first.

As for diseases, you should look out for floppy stems. This is caused by a lack of sunlight. High humidity levels and poor air circulation around the plants might cause powdery mildew, rust, or stem rot. You’ll need to remove the infected parts and dispose of them safely. Also, cut back on watering during high humidity spells and improve the airflow between the plants to prevent these diseases.

By early summer, yarrow shows its full splendor as the first flower clusters open up. Since each flower head carries many clusters, you’ll have to wait for all clusters to open up before you can cut that flower head. And to check for the stem’s maturity, give it a good shake. If it pops its head from one side to the other, it’s not mature enough yet. And the best part is, the more flowers you harvest, the more flowers the plant will grow to replace those you’ve just harvested.

So you can keep harvesting yarrow flowers from early June until mid-September. For best results, harvest the flowers either in the early morning or in the late evening. The flowers look their best in cool temperatures. Keep them in a vase where they’ll stay fresh for weeks on end.