Vanilla is a staple flavor in every kitchen. From ice cream and chocolate to dessert recipes and beverages, vanilla makes everything not just palatable but downright delicious. And if you’re wondering where this magical white substance comes from, wonder no more. Vanilla is extracted from the seed pods of the vanilla bean orchids. And while you can certainly grow the vanilla orchid in your garden, most gardeners do that for its landscaping values rather than for its fragrant seed pods. It’s not an easy plant to grow, though and there’s a lot to consider and pay attention to. Also, if you’re looking for a flowering plant, the vanilla orchid blooms can be a real challenge. So let’s unpack all of that.

Vanilla orchid (Vanilla planifolia), or vanilla bean orchid as it’s sometimes known, has a vine-like growth and usually flowers in the late spring or early summer. The word vanilla comes from the Spanish word for small pods, “vainilla.” It’s a native of Mexico and likes to crawl and find support in other plants or trees nearby.

And that’s where the ornamental values of these orchids come in. They have flat leaves, which are the most striking features as far as horticulturalists are concerned. As we mentioned, you will find it hard to get the vanilla orchids to bloom in your garden, but the leaves are ornamental enough in many cases. Not to mention the way the flexible stems wrap themselves around tree trunks and create stunning zig-zags.

As perennial creepers, the succulent stems can reach heights of 30 feet. But since they crawl and wrap themselves like a vine, they usually end up taking less space than that. The aerial roots are another landscaping bonus. But it’s actually the leaves that steal the show.

They are large and flat with bright green shades. Each leaf grows to up to 10 inches long and about two and a half inches wide. Even if your vanilla orchids bloom, they will take at least about three years from the time you plant them to finally show their flowers. When they finally appear, the blooms are yellow and fragrant.

The fruits of the vanilla, or its beans, are pods that turn dark as they ripen. Each pod is about 8 inches long, and they become aromatic once they’re ripe. This ripening might take anything between 8 to 9 months.

Some of the common vanilla orchid varieties to plant in your garden include the following.

How to Grow Vanilla Bean Orchids

While the vanilla bean orchid is not your typical house or garden plant, that doesn’t mean you cannot grow it in your garden. Even if you have no interest in the vanilla extracts, the ornamental values of this orchid put it on the must-have list of many gardening enthusiasts. It does require some work and more care than other plants, but to have a live vanilla bean orchid growing in your garden is worth every amount of work you put into it. 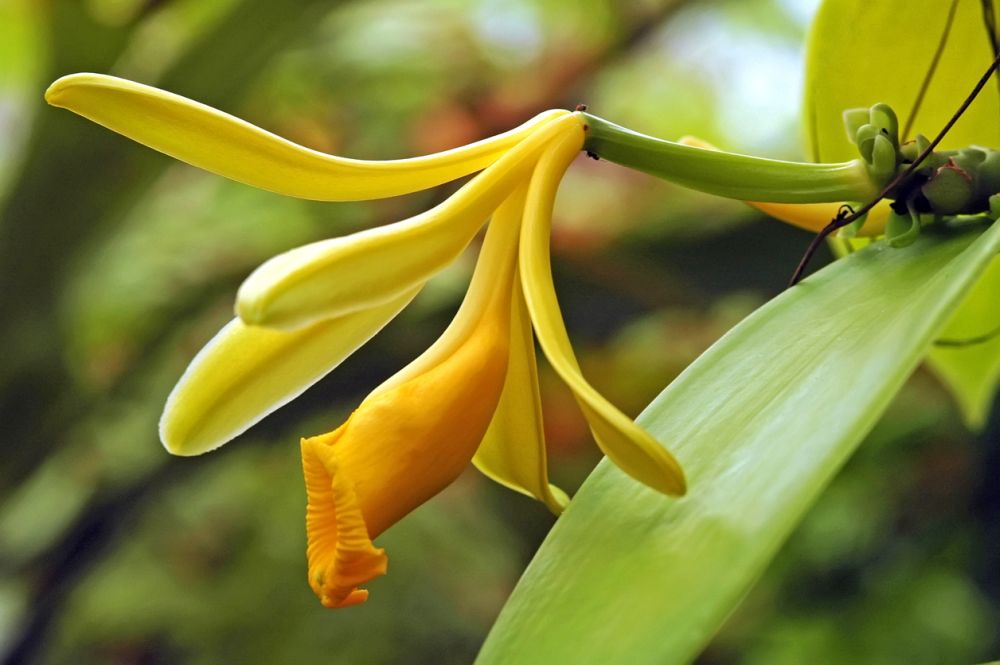 If patience is a virtue, the vanilla bean orchid sure needs you to be as virtuous as you possibly can. From the time you plant it until the blooms finally open on the orchid, you will need to dedicate your time and energy to keep the plant growing successfully. This includes providing adequate light, water, fertilizer and ensuring that it’s both pest- and disease-free. Easier said than done, you might say. And you’re absolutely right. The vanilla bean orchid is not for absolute beginners who want to see the fruits of their labor blossom in a matter of weeks rather than years.

For a plant that stays for years before it can show the first bloom, you need to pay extra attention to the soil. Even if the plant is not showing a whole lot of growth in the first 3 years of its life, that doesn’t mean that it doesn’t need rich soil. Before you plant the orchid, check that the soil has high deposits of potassium and calcium. The pH should not exceed 7 by any chance. The soil needs to be light and loose. If you can’t find the right potting mix, you can add perlite and organic material to loosen the soil and improve drainage.

Watering is another tricky issue as far as the vanilla orchids are concerned. Again the plant takes years to grow and show signs of life, so it’s easy to forget to water it. But that could kill the plant since it likes the soil moist but not dry. Avoid overwatering since wet soil leads to root rot and fungal infections. Root rot can be hard to detect in the early stages of the orchid’s growth. As a rule of thumb, you should wait for the soil to go dry between irrigations.

It goes without saying that all climbers don’t do well in the full sun. They grow in the shade of large trees, so whatever light they get is usually filtered. In your garden, you need to provide the same light conditions the vanilla orchids are used to in their natural habitat. A shaded place that keeps them from the glare of the sun is ideal for their growth and success. It’s okay if they get the morning sun for a couple of hours. But excessive sunlight stunts the growth of these slow-growing orchids. The lack of light also gives the same bad results. So aim for a partially shaded spot that has enough light.

Whether they’re flowering or not, you need to fertilize your vanilla orchid. Regular fertilizing about once every two weeks improves the growth and speeds up the maturity and flowering of these orchids. By speeding up, I mean it can cut the waiting period from 5 years down to 3 years before you see the first flower. Once the flowers open, you need to increase the fertilizing to once a week. Use a diluted dose of the regular fertilizer not to burn the roots. Hold off the fertilizer after the flowers have faded.

Plants attract bugs and pests, that’s a given. And when the plant is as aromatic as the vanilla orchid, you can expect a different type of pests than your average aphids and mealybugs. Most often, you’ll find bugs scurrying around, such as vanilla bug, beetle, giant African snail, vanilla vine weevil, Achatina, and white grubs. If you catch them early, there’s a good chance you can prevent an infestation. Use a swap soaked in alcohol to coat the stems and leaves and kill the small bugs. As for the large ones, such as the beetles, you can pick them up and drown them in a bucket full of water and detergent.

As for diseases, well, you also have a few to deal with. The first is root rot. A common problem for many annuals and perennials. It often happens when you overwater the plant, or the soil is not well-drained. The problem with the vanilla orchid is that for the first couple of years, you won’t be able to detect the symptoms of root rot since there are no leaves yet.

The other health issues you might encounter with the vanilla orchid include black rot, rust, anthracnose, and stem rot. Fungal infections are the main cause of these diseases.