of 3
Exotic 'scindapsus pictus exotica' or 'satin pothos' houseplant with large leaves with velvet texture and silver spot pattern
The golden pothos were planted in a potted plant, this is the detail of green leaf of garden tree
Silver pothos plant scandapsus pictus
Scindapsus Pictus Care: How to Grow & Care for the Silver Pothos Plant
Buy Now 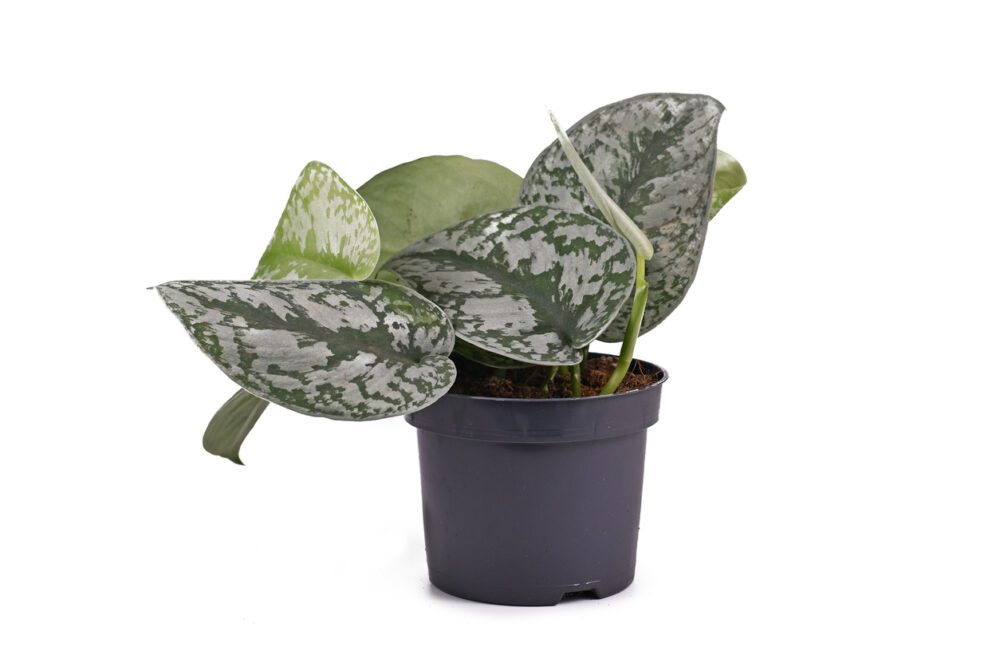 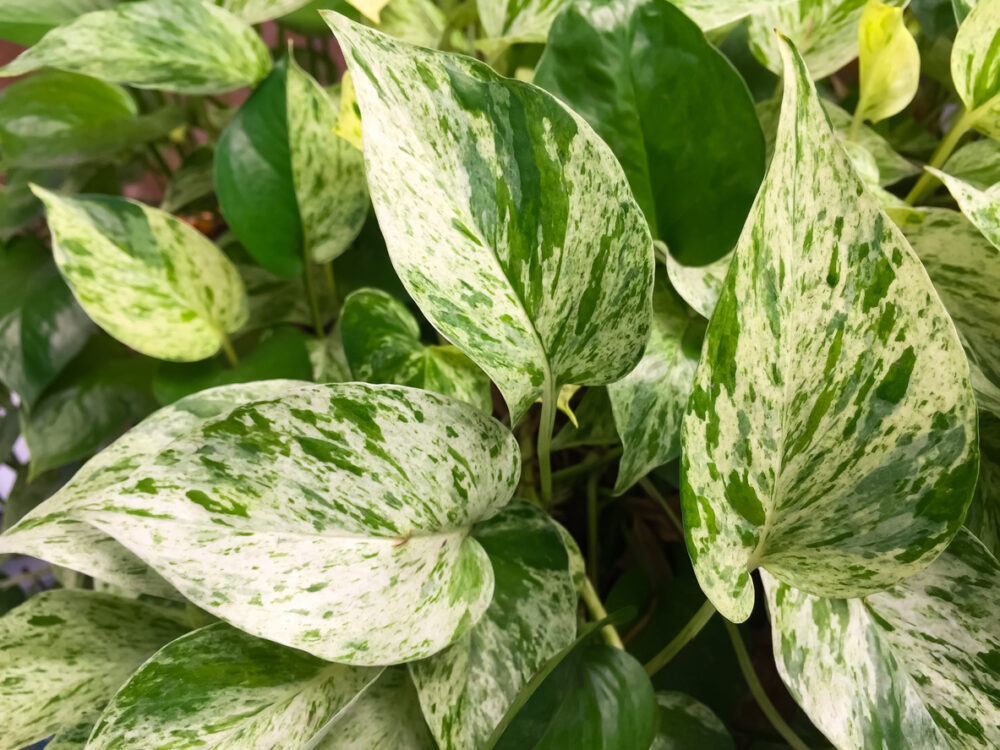 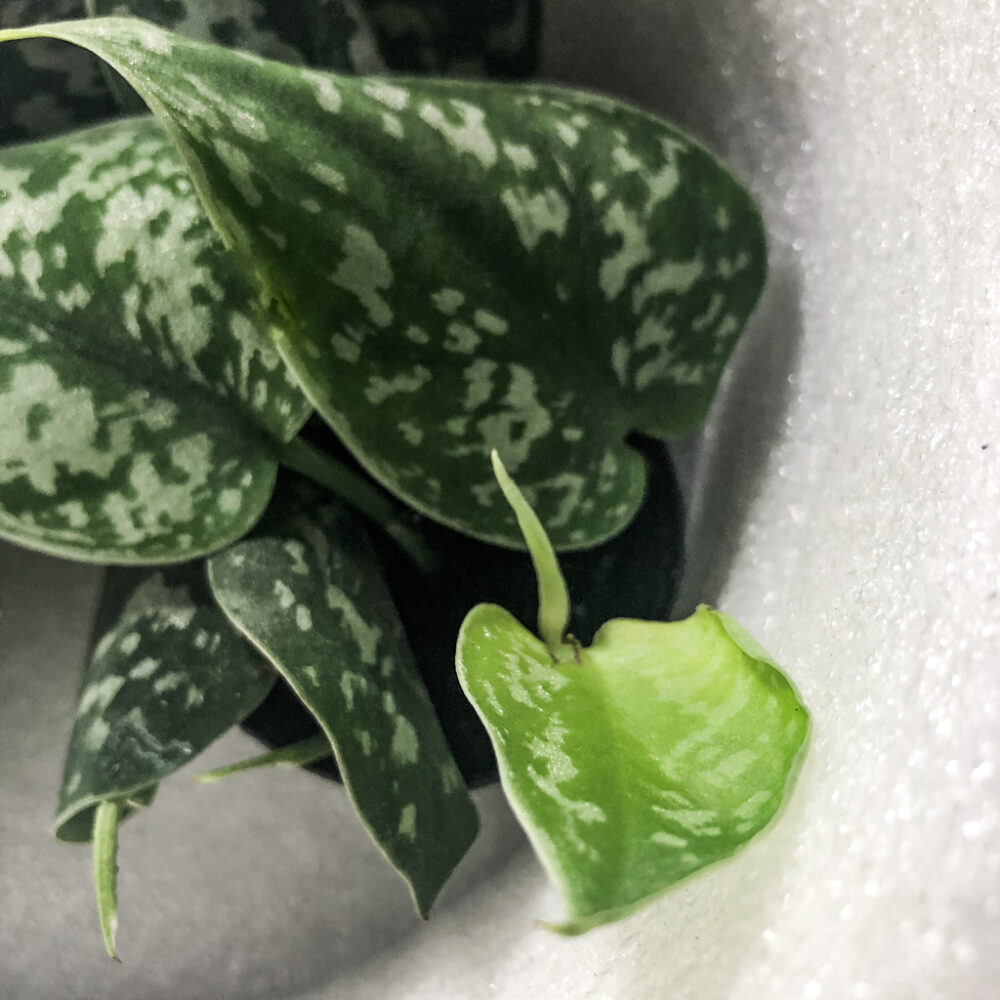 Variegated cultivars a rare kind yet astounding in many ways. And the Scindapsus Pictus, or commonly referred to as Silver Pothos, is one such plant you start with if you’re willing to be a bit patient with the rate at which it grows at. 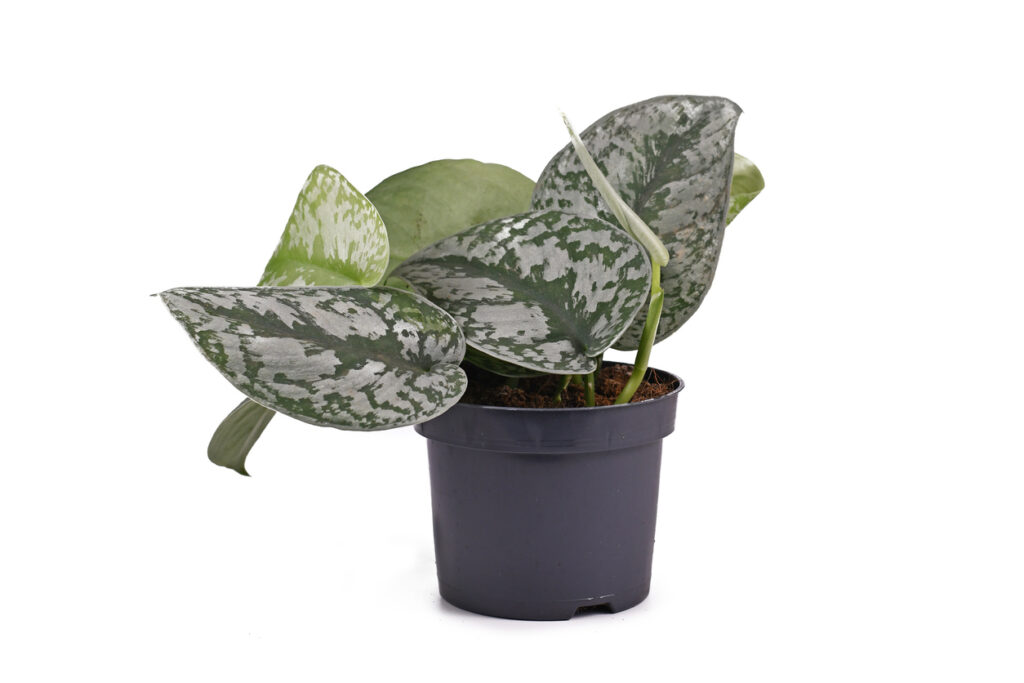 Also scientifically labeled as Epipremnum Pictum, this flowering houseplant is accustomed to tropical conditions, suggesting it would grow in an ecstatic fashion when grown under a humid environment. It’s arguably one of the most sought-after species in the Araceae family.

More About the Silver Pothos Plant

What’s quite fascinating is the Swiss Cheese plant also belongs to the same family as the Silver Pothos houseplant. This trailing plant remains green throughout the seasons and is native to a number of regions in Southeast Asia such as Borneo, Thailand, Philippines, Peninsular Malaysia, and Sumatra. Other names it commonly goes by include:

As a trailing tropical plant, you can expect it to reach up to 3’ feet when growing indoors. When grown outdoors, it can elongate faintly beyond 10’ feet. And while the Silver Pothos plant sprouts, it forms heart-shaped leaves with silver patches, hence its byname.

If you’ve ever cultivated this tropical stunner, I presume you noticed how out of the ordinary it is for the Satin Pothos houseplant to produce any significant flowers. In the summer, however, it might bloom a few miniature flowers— each stemming from a spike that’s typically known as a spadix.

It doesn’t bloom when under cultivation, and the flowers would only appear if the houseplant is at its maturity stage. You might see a few tiny berries when the blooming stage is almost coming to an end. The flower stalks will appear bright and green, with a purple tone around the spadix. 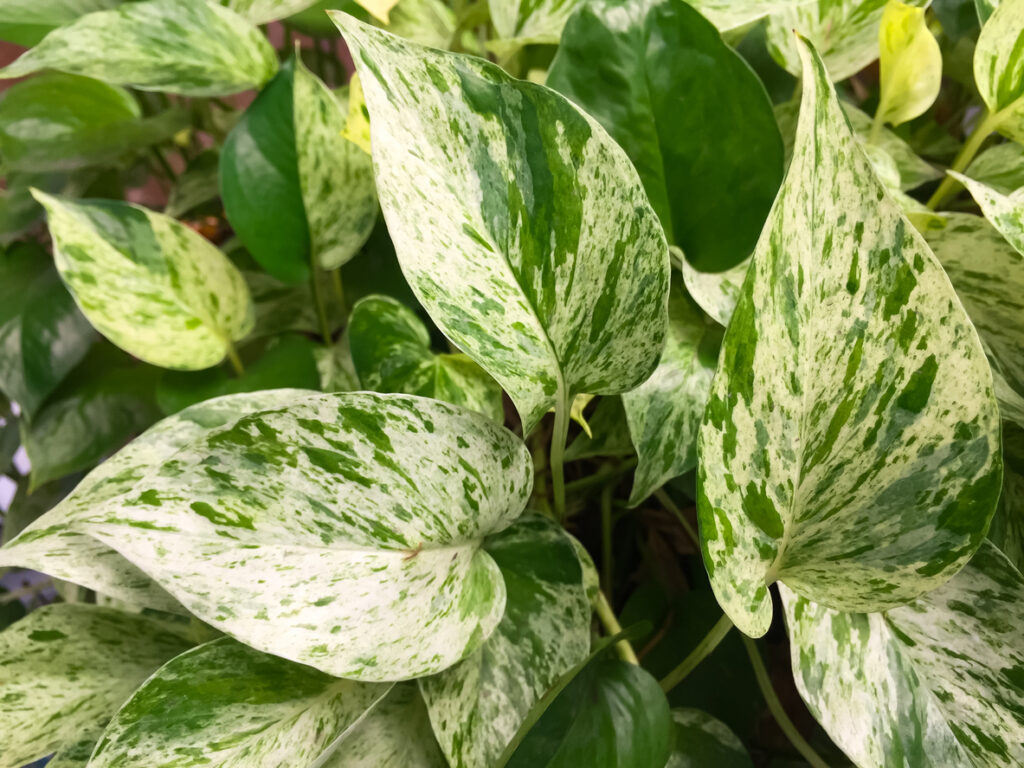 This Silver Pothos isn’t too demanding when it comes to the soil requirements. You can use normal potting soil and make a few amendments to it. What matters most to this charming houseplant is drainage. So, you can’t overlook the aeration capacity of the soil.

Mixing the potting mix with sand and perlite would help fix the drainage issues. I would also recommend top-dressing the soil using organic compost together with mulch made of wood chips, peat moss, and grass clippings. Such materials help the soil retain some moisture after watering.

You also want to use a potting mix that’s nutrient-rich, hence it’s best to use organic compost. Transplanting would be necessary if the houseplant outgrows its original container. And the best time for repotting is during the spring season.

For a tropical plant with the potency to grow tall and spread wide, I’d suggest repotting your Silver Pothos plant in a container that’s at least two inches bigger in diameter than the old one. Using one with enough drainage holes is suitable for keeping the roots from rotting since patently obvious that soggy soil tends to cause irreparable damage to most houseplants.

The watering needs of your Satin Pothos are quite concise and easily discernible. You just want to keep it far from the effects of overwatering. If the soil remains drenched for too long, then the leaves would begin to wilt. You might also spot a few signs of rotting if you keep on watering the plant excessively.

When watering your Satin Pothos plant, you need to place the growing medium under room temperature. Before watering, check if the first few inches of the soil have entirely dried up. On the other hand, the effects of underwatering tend to be unforgiving.

The leaves will begin to wither if your neglect their watering needs for a while. If the soil can handle drainage quite well, you can save your houseplant from such dreadful conditions. When the foliage begins to curl, that could be a sign to show your Silver Pothos houseplant desperately needs to be watered.

On most occasions, it will need frequent watering intervals when the temperatures are warmer compared to when it’s freezing. So, you want to space out the watering frequency during winter much further. And for optimal growth, keep the growing medium under humidity levels of at least 40% or slightly higher.

To keep tabs on the humidity requirements, you can mist your houseplant gently using a spray bottle or place the growing medium on a pebble tray to naturally humidify the leaves. You can make the best use of a digital hygrometer if you’re finding trouble figuring when exactly to tweak the humidity conditions.

Summer and spring are the pre-eminent seasons for feeding your Silver Pothos houseplant. An all-purpose fertilizer that’s soluble would suffice. Slow-releasing fertilizer in the form of granules spreads out in the soil evenly and remains effective for a couple of weeks.

If you choose to top-dress the potting mix with organic soil, there won’t be any need for using too much fertilizer during the growing seasons. But water-soluble fertilizer would still be the most formidable quick-fix, especially when the leaves begin to lose their distinct color. Using the fertilizer once a month every growing season would help your Silver Pothos plant yield desired results quite opulently.

Most topical plants prefer to bask under some bright but filtered light each day. Place the growing medium somewhere with partial shade to protect the leaves from getting scorched. A window that’s facing west will give access to bright light but misses out on the hours when the sun is a little more intense.

The other option is to grow it inside a hanging basket near a window that’s facing east. Try to mimic the tropical temperatures mostly if you want to see your Silver Pothos houseplant bloom. You also need to protect it from the frosting conditions when it’s winter. It’s needful to note that this tropical houseplant isn’t frost-tolerant.

It can’t withstand temperatures that fall below 15 degrees Celsius, so you’ll want to tweak the room conditions when it’s winter. Apart from bright filtered and medium to moderately high humidity, the Silver Pothos houseplant opts for temperatures ranging between 18 – 29 degrees Celsius.

While there’s no harm in growing your Silver Pothos houseplant under low-light conditions, the downside is it might become leggy and appear bushy. Lack of enough light would also cause the variegated color on this tropical beauty to lose its vibrancy and vigor.

There won’t be too much grooming to do on this tropical houseplant. But make sure to get rid of leaves showing signs of wilting or seem to be madly damaged by the effects of overwatering. Try as much to avoid leaving the soil soggy for too long.

You, however, need to keep up with its humidity needs since it’s a tropical plant that blossoms when the levels are moderate to slightly high. Move your Silver Pothos plant indoors during winter to keep it from the frosting weather. Prune it occasionally to encourage new growth.

How to Propagate the Silver Pothos 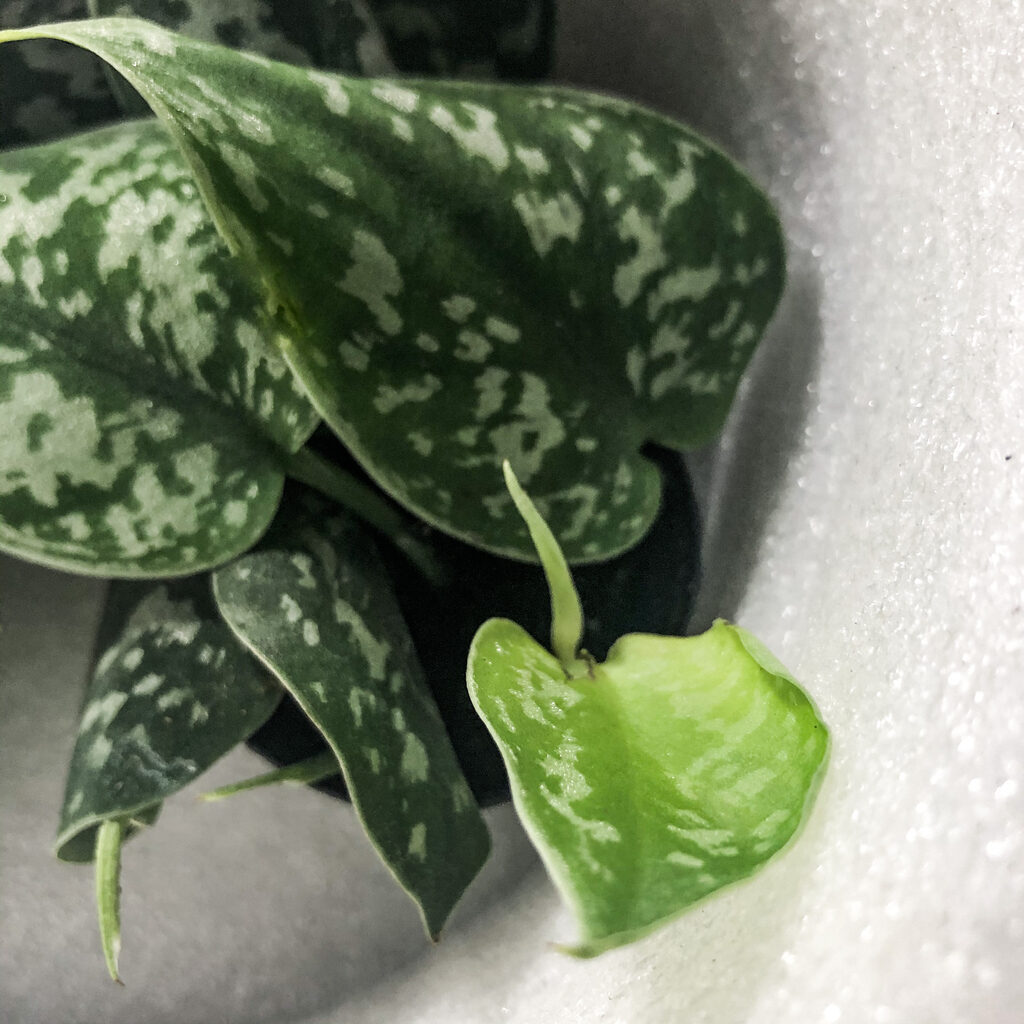 It’s easier to propagate your Silver Pothos houseplant using stem or tip cuttings. For both ways to work out just fine, you want to wait till spring or summer. While these two options are fit to yield desired results, you also need to follow the pointers below:

For the most part, this tropical houseplant won’t struggle with pest attacks or any major diseases. But there are few instances where it might get attacked by mealybugs and spider mites. It’s common for your Silver Pothos plant to get infested by these two pests, especially if it’s growing indoors. You also want to avoid overwatering it to protect the roots from rotting.

Pothos Care: How To Grow, Care, and Propagate The Devil’s Ivy