There are shrubs and then there’s the Mexican Bird of Paradise shrub. While it resembles a miniature tree growing as high as 15 feet and with a similar width, this is a delightful shrub with yellow flowers that bloom in the spring and summer. You can prune it to make it a shrub or let it grow into a small tree. 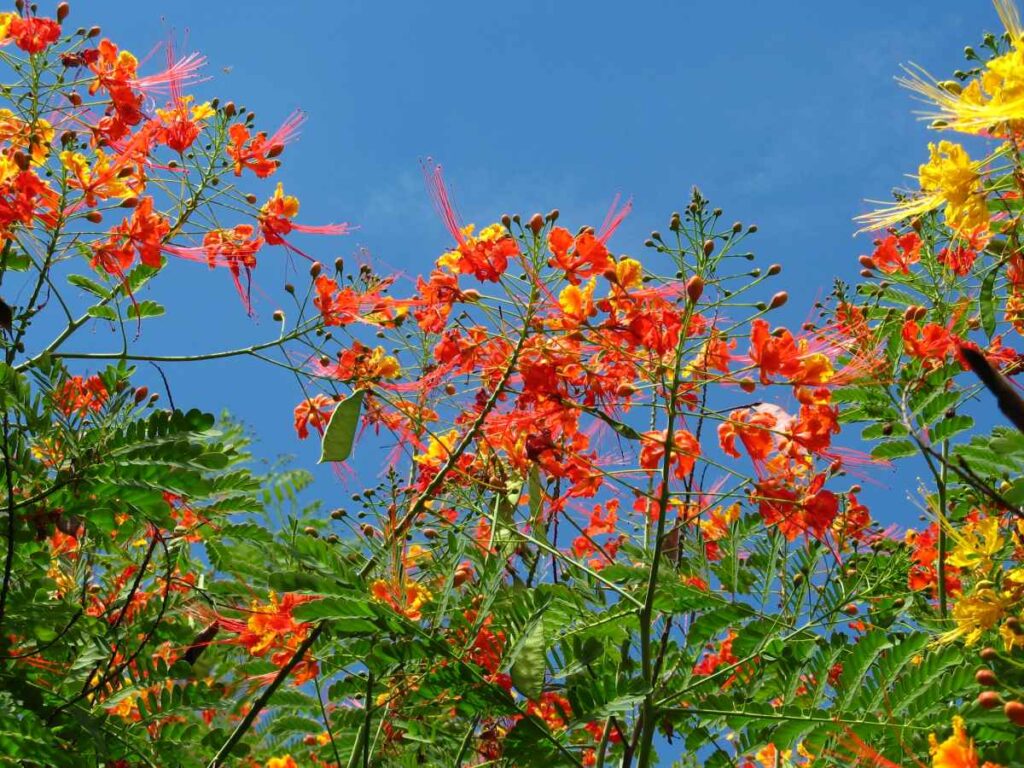 What makes the Mexican Bird of Paradise such a right fit in your garden is that it is easy to grow, doesn’t require much care, and has a moderate to slow growth rate. A native of Northern Mexico, Caesalpinia Mexicana cuts a fine figure with its feathery green leaves and yellow flowers that grow on spikes. Once the flowers fade, pods packed of seeds appear on the spikes and explode spreading their seeds everywhere.

The bird of paradise or Caesalpinias, is a family of shrubs that vary in size and if left on their own, they’d become small trees. They all have one thing in common, they can survive in harsh conditions and are accustomed to little water and dry and hot weather. So which variety fits in your garden or lawn? Here are the most popular ones.

How to Grow Mexican Bird of Paradise from Seed

You can propagate the Caesalpinia mexicana in one of many ways. Layering and cutting are common ways to grow the shrub. But as it produces an abundance of seeds every year, many horticulturalists prefer seeds as a means of propagation that gives them more control over the species and its features. The only drawback is the seeds are hard and require plenty of processing and treatment before you can plant them.

With the Mexican Bird of Paradise growing in your garden, your work is not over. In fact, it’s just beginning. While the mature shrub is famously self-dependent and doesn’t make a fuss except with the spreading branches and leaves, you still have a lot of work to do before you can get to that stage.

The permanent soil in your garden is different from the one you use to germinate the seeds of the Mexican Bird of Paradise. The shrub can handle all kinds of soil from clay to loam types. As long as it’s well-drained, you have nothing to worry about. Before the shrub reaches maturity, you need to make sure the soil is moist most of the time especially during the hot summer months.

As a shrub that grows in the Northern Mexican regions, the Mexican Bird of Paradise needs a lot of sunlight to grow and produce flowers. In your garden, make sure you plant it in a spot facing the south or west to get the longest hours in the sun. Partial shade might not affect the growth of the shrub but it will put a dent in the blooms.

The soil needs to be moist while the plant is still in its nascent stages. This includes when the seeds are germinating, the seedlings growing, and the first few months after transplanting the plant to its final destination in your lawn or garden. But once the roots establish and the plant shows signs of maturity, it can do away with irrigation altogether. You still need to water it once every two weeks during the growing season in the spring and summer.

The Mexican Bird of Paradise falls within the USDA hardiness zone of 9 which means it can tolerate cold weather although it prefers high temperatures between 60 to 78 degrees F. When the temperature falls below 32 degrees F, the plant goes into dormancy. It’s not dead though. Because by the next spring it will come back to life with leaves sprouting everywhere.

You don’t have to use organic compost or chemical fertilizers with the Mexican Bird of Paradise. Much like cactus, it’s used to the rough and tumble of the Mexican desert and can survive on the bare minimum of nutrition and water. Still, if you want to encourage it to produce an abundance of vivid yellow blooms, you could use a 20-20-20 fertilizer in small doses in the late spring and early summer.

By far the most work you will be doing with the Mexican Bird of Paradise will be related to pruning. Even though it’s a slow growing shrub, you still need to keep your pruning scissors handy. If left to its own devices, the shrub will grow into a small tree and spread far and wide. Once the fall season winds down, get cutting the branches to protect the plant against the onslaught of the frost.

One thing to keep in mind when collecting the seeds is that they are very toxic. You should keep them away from children, animals, and birds in your household. When you store the seeds in the fridge, clearly label the jar. Symptoms of poisoning include mouth irritation, stomach ache, and nausea and vomiting in severe cases. Birds are more vulnerable and a few seeds can be fatal. In the case of large animals and children, the symptoms are mild and the treatment is limited to drinking large amounts of water.

In its natural habitat, the Mexican Bird of Paradise can handle anything Mother Nature throws at it. However, when it grows in a lush garden, it has to grapple with invading bugs that don’t usually survive in the desert. Among those, aphids and powdery mildew are the ones who target the shrub in its early phases before it matures. Keep in mind that most infestations happen when the plant lacks water or enough light. The soil should be moist to help the shrub grow and make sure it gets at least 5 hours of full sun every day.

Bird of Paradise (Plant): Growing and Caring For The Strelitzia Nicolai Flower