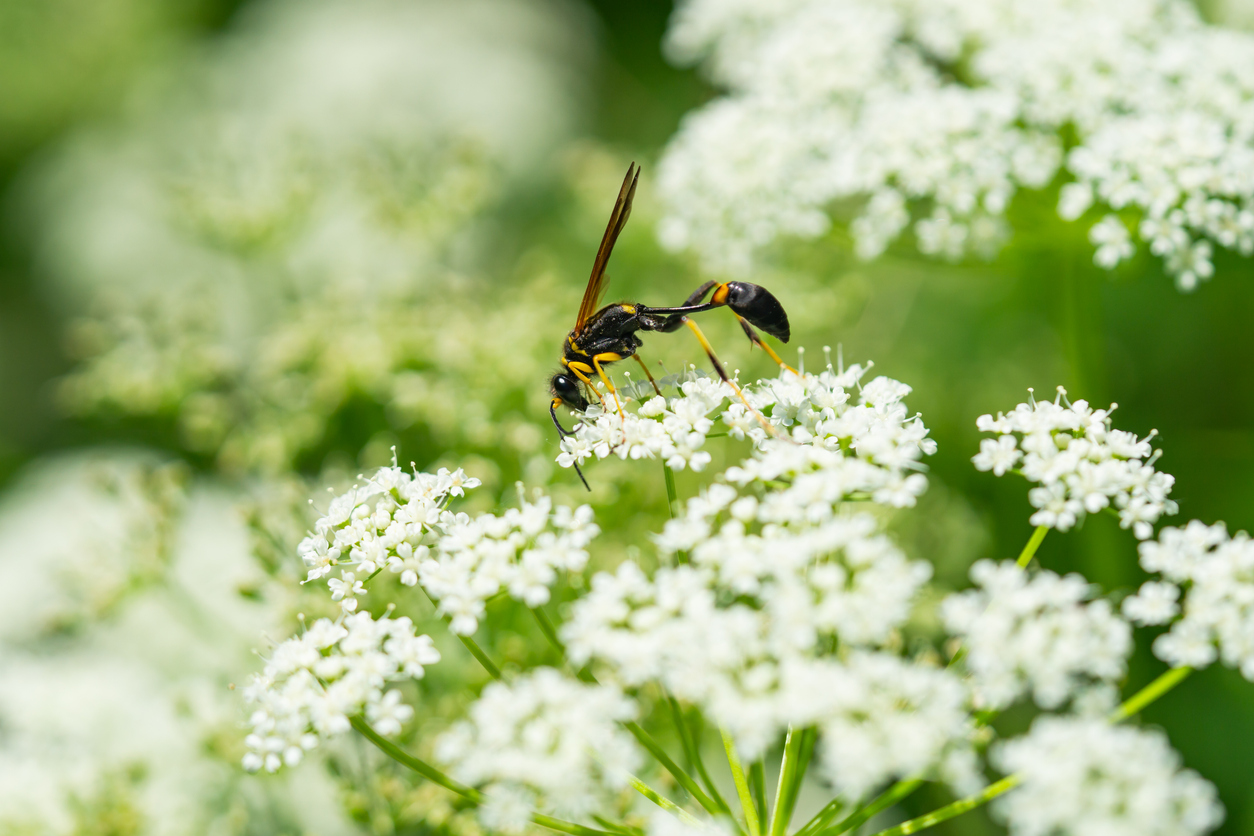 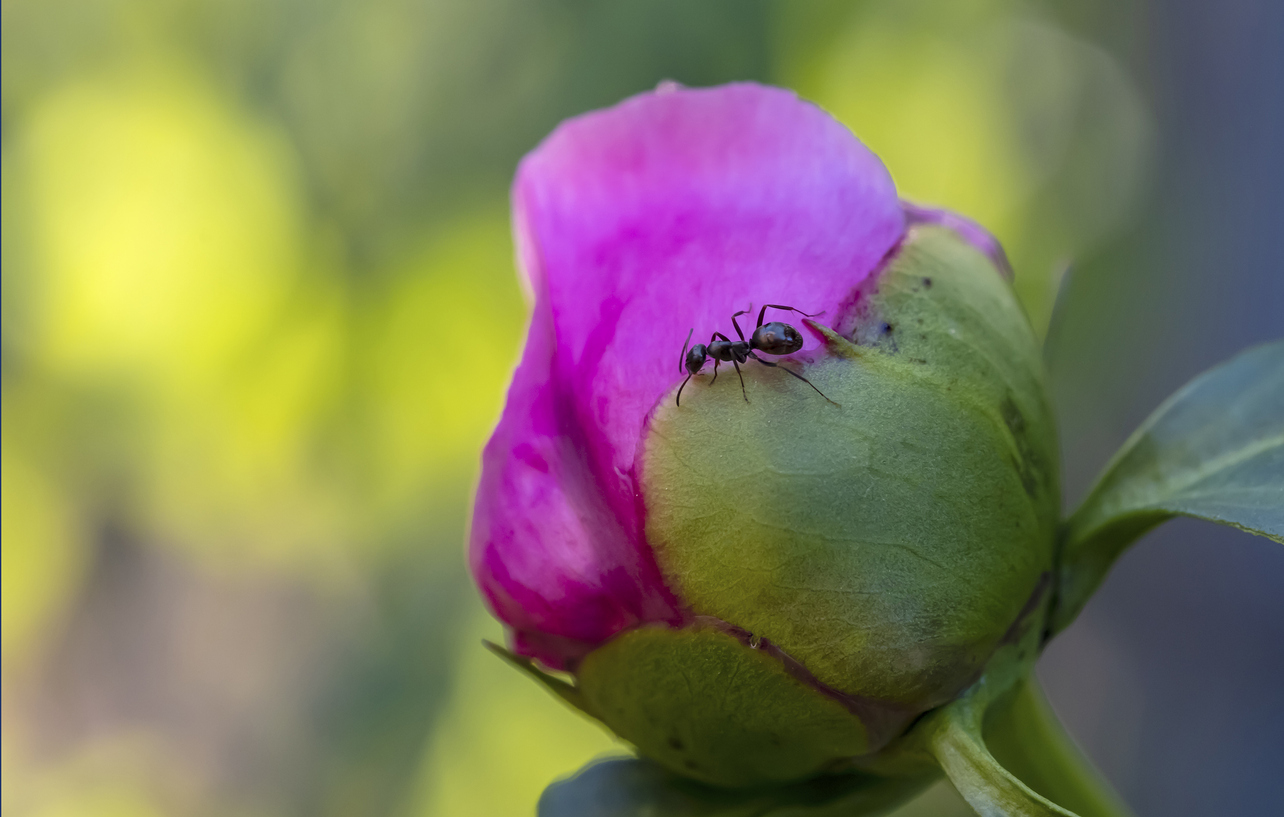 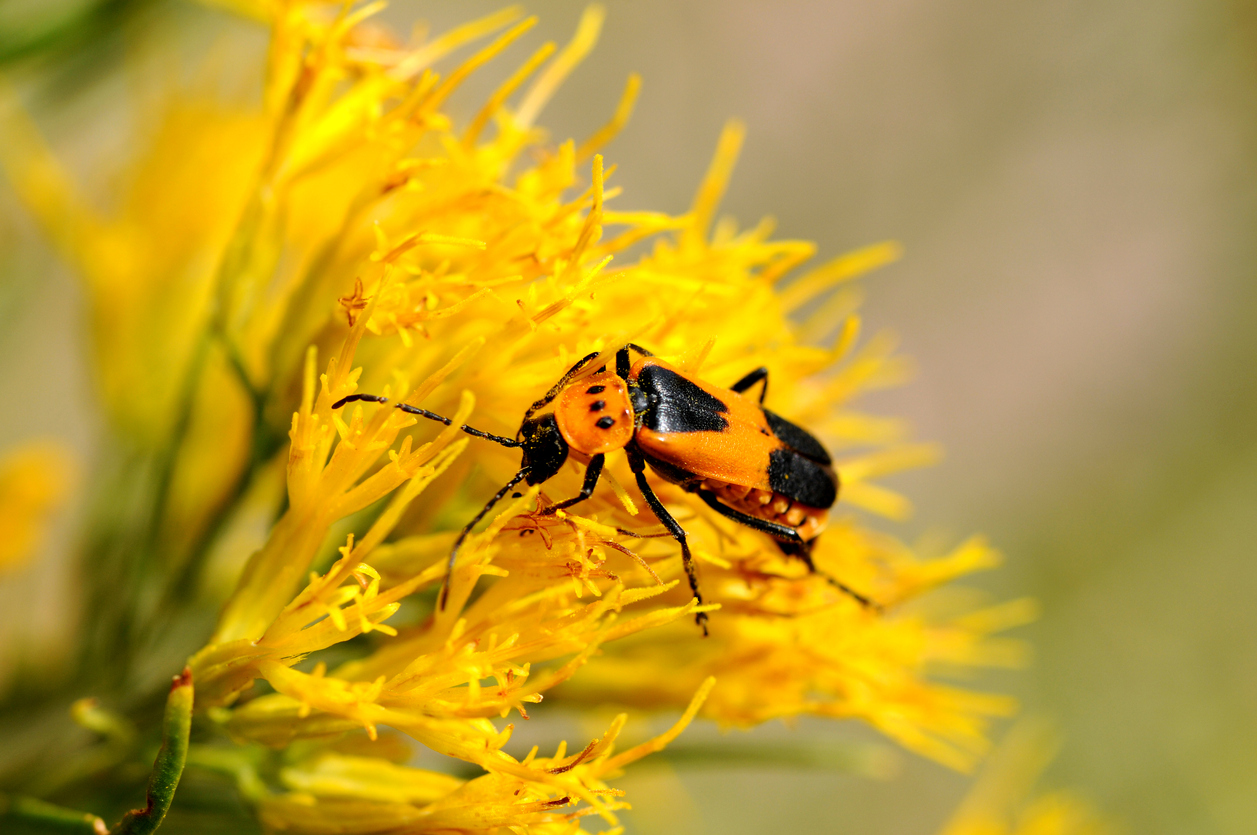 Pollination is an important part of the plant’s life cycle that many forms of vegetation wouldn’t exist today without it. Flowering plants pollinate to make seeds that preserve the species. And while the wind can be a good, if unpredictable, pollinator, this task usually falls on the shoulders, or rather legs of insects. 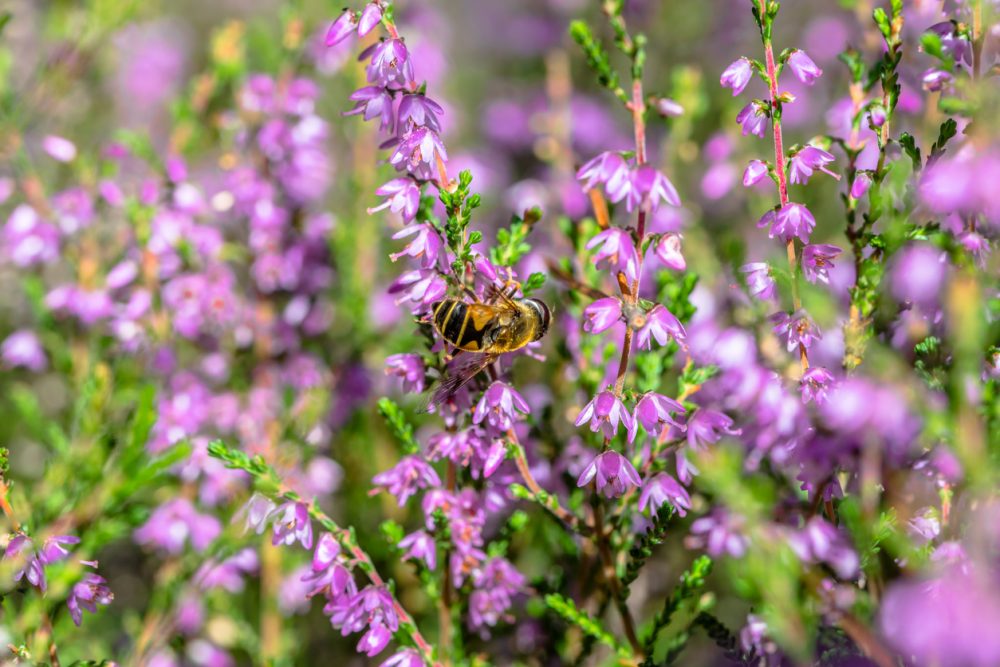 Not all insects are bad for your garden. However, not all of them carry the job of pollinating your flowers with great efficiency. The honey bee and the monarch butterfly are the first names to jump to your mind when you think of diligent pollinators. But did you know that they’re not the only ones that carry out the job of a plant Eros?

Many insects in the garden have a bad reputation. They’re blamed for damage to plants, ruining crops, and killing flowers outright. But that’s not fair for some other good insects that do a whole lot of good to your garden and little if no, harm whatsoever. Here are some of these often overlooked garden insects and how you can encourage them to visit your garden more. 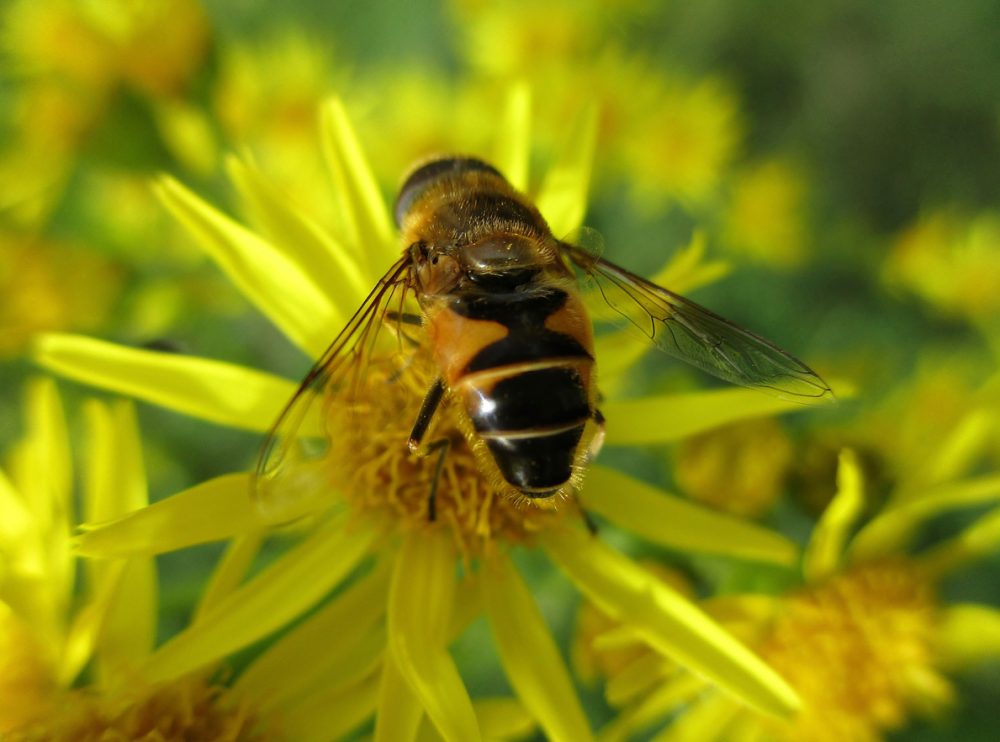 Flies have always had a bad rap. They are annoying, invasive, and don’t take no for an answer. It’s almost like they have no brain or memory, which is exactly right. The reason house flies keep coming back after you swat them is they have no memory. But don’t go mistaking the flower fly with the other pesky species of flies that we’d rather see the back of.

Too colorful and do-gooder to be considered flies, the flower fly belongs to the Syrphidae family. With translucent wings, an elongated body, and brown patterns on a bright yellow background, these flies can be easily mistaken for bees. The reason they do that is for the disguise, of course. They don’t want predators to spot them and make a quick meal out of them. But unlike bees or wasps, flower flies have two wings rather than four and don’t have a hair waist like a bee or a cinched one like the wasp.

So why are these pretty insects so important to the health and wellbeing of the plants in your garden? For one thing, their larvae or grub phase is just as crucial in their garden as the adult flower fly stage. As grubs, they feed on aphids, one of the nastiest and most ubiquitous garden pests. This is why many flower flies lay their eggs on leaves covered with aphids as a ready meal for the larvae when they hatch. Think of them as organic pest control that nature provides to you free of charge.

Flower flies are drawn to flowers the same way bees are. It’s right there in the name. The adult insects feed on nectar and pollen. They make their daily rounds visiting and pollinating as many flowers in as many gardens as they can. So naturally, if you want them to pay you a visit and spread their good work around your plants, then keep as many flowering plants as you can in the garden. They’re also attracted to plants covered in aphids. So it’s a win-win situation for everyone involved, except for the aphids, of course.

Sceliphron caementarium is the scientific name for this common wasp. But unlike other mean and stinging wasps, there’s nothing common about the mud dauber wasp. With a sculpted waist that is barely visible, this wasp rarely stings. Mainly because it doesn’t have a hive to protect, nor does it hold grudges for any reason. In other words, if you see the mud dauber wasp in your garden, don’t think of ways to eliminate it. Instead, think of how to make it drop by more often.

Unlike other wasps, the mud dauber wasp is a solitary insect. It rarely spends any time with another of its species except for mating. This is a builder wasp. It crafts a tiny nest out of the mud. The nest is round in shape and resembles an ancient village built out of adobe. You might find these nests on the wall in your backyard or on the shed.

Apart from pollinating flowers, mud dauber wasps do your plants a great service going after aphids and spiders. While their smooth bodies don’t carry as much pollen as the hairy bees, they still relish the juicy aphids and go after spiders like there’s no tomorrow. So instead of resorting to chemical pesticides, the mud dauber wasp does a clean job with zero footprints on the environment.

Since nectar and pollen attract mud dauber wasps, then offering them plenty of their favorite food should act as an open invitation for them to come and cleanse your garden of all the bad insects. If they like your garden so much, they might even build their mud homes in the vicinity and visit your flowers every day as long as they are in bloom.

Just like flies, ants have had a testy relationship with humans. They live in large social groups and swarm any source of food like a famished army. While the fire ants are reviled for their aggressive behavior, black ants are the exact opposite. They don’t sting and live in peace, minding their own business for the most part.

Black ants are just your typical ants that come in black. They can coexist with plants in a symbiotic relationship where they do no harm to the plants and instead help them grow and flourish. Before you think of calling pest control to manage the colony of black ants in your garden, think of all the good work they do.

Just like all other insects that crave the delicious nectar of the flowers, black ants help the flowers pollinate in the process. But they don’t carry pollen per se. Instead, they swarm the flower in large groups that deter other flower-eating insects from approaching that flower and damaging it. This applies to peonies in particular.

Black ants do pollinate other veggies. Pumpkins are one of the plants that attach their pollen to the legs of the ants as they scurry in and out of the pumpkin flowers. So if you have pumpkin flowers but no ants, chances are you won’t have pumpkin fruits this year. Not unless bees swoop in and do that job.

Plant as many pumpkins, marigolds, and Green-and-golds as you can. Unlike other insects, black ants don’t fly, which means they need to have low-hanging flowers near the ground that they can climb and feed on their nectar.

Avoid using chemical pesticides that would kill the black ants. Also, try not to flood their homes or demolish them. Black ants do a great service to the environment, and it would be a shame to see your pumpkin plants die out without giving you a good crop. Halloween wouldn’t be the same that year.

The scientific name for this unique insect is Chauliognathus pennsylvanicus, but it’s simply called the goldenrod soldier beetle. That’s because goldenrods are its favorite hangouts. However, you might see it lurking on other flowers.

Although they have bright and cheerful colors, the goldenrod soldier beetles are, in fact beetles. But they don’t cause any harm to animals, plants, or humans. They don’t bite, sting, or spray you with a nasty chemical. In fact, they’re as harmless as the black ant. Their larvae don’t feed on plants either. Instead, they live in the soil and feed on small insects.

When you look at the scraggy legs of the goldenrod soldier beetle, think of how many thousands of pollen can each leg carry as it crawls from one flower to the next. They eat the nectar and pollen but mostly carry more pollen on their bodies than they eat.

In addition, these soldiers go after other insects that eat on your plants and ruin your blooms. From caterpillars to aphids and insect eggs, they have a voracious appetite and won’t rest until they have devoured the last insect in your garden. You couldn’t ask for a better soldier fighting the good fight on your behalf.

Goldenrod soldier beetles visit gardens in the fall. They are mainly attracted to flowers that offer plenty of nectar and pollen. So fall bloomers such as anise hyssop, goldenrods, milkweed, Queen Ann’s lace, rattlesnake master, and of course sunflowers are natural magnets for this soldier beetle. In fact, sunflowers are the best draw for this beetle since it helps it stock up on food for the winter months.