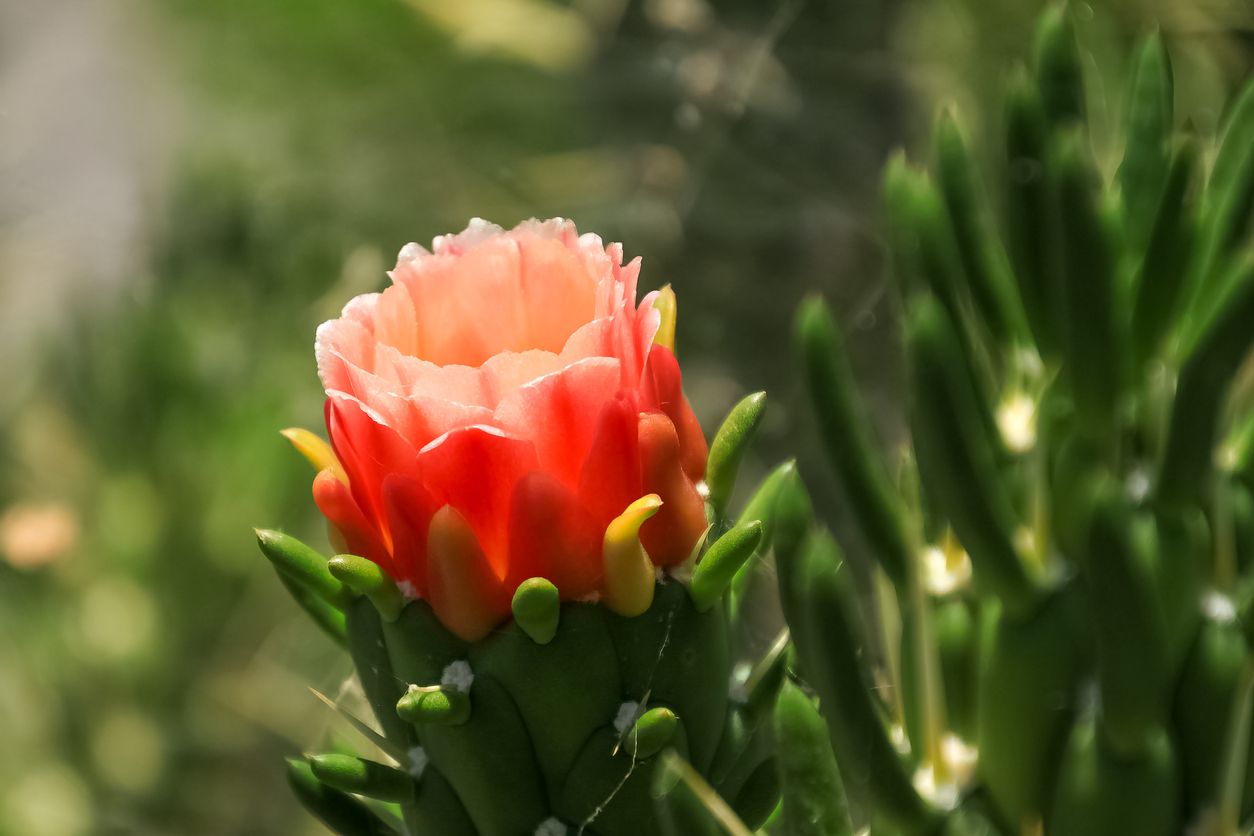 Cacti plants know their way around harsh conditions. You literary don’t need lengthy tutorials to adopt and care for one. In this guide, we’ll pay close focus on a very unfussy cactus plant— the Opuntia Subulata— a species in the Cactaceae family. It has the most fitting attributes you’d be probably looking for if you don’t want to be bombarded with a long-drawn maintenance routine. 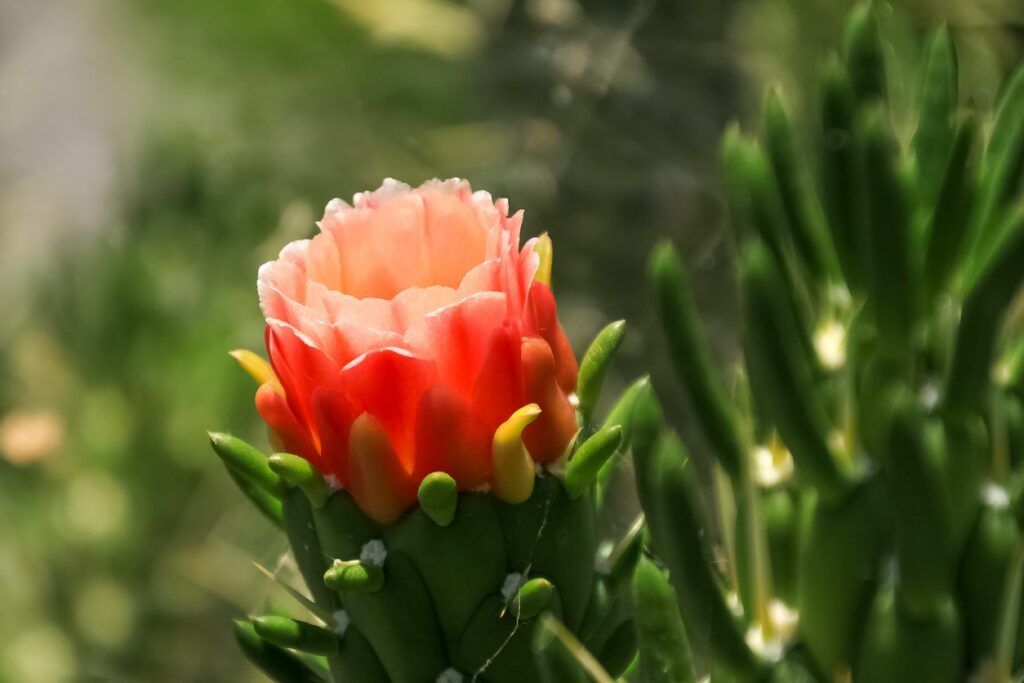 Popularly known as the Eve’s Needle, this cacti plant manifests itself in a grandiose manner as it grows older. Being a succulent type, it can withstand neglect much longer compared to other commonly grown houseplants you’ll typically find in gardening stores. Let’s find more about everything it needs to make it reign over other plants in your garden or indoor space.

Eve’s Needle Cactus at a Glance

This Opuntia genus belonging to the Austroclyindropuntia subcategory is patently identified by its branched trunks attached to the base, sharp spines, awl-shaped leaves, and reddish flowers that mostly bloom when growing under desert-like conditions. Its botanical name is borrowed from a Latin phrase ‘ Subulata’ which means ‘awl-like’ and the reason for the name majorly attributed to the shape of the leaves.

The Eve’s Needle cactus is natively from the southern region of Peru but is now commonly grown across South America as well as the southern parts of Canada, where the growing conditions are somewhat alike. With proper care and maintenance, this cacti plant can thrive tirelessly even for decades.You’ll highly likely find other nurseries and gardening stores labeling this variety as:

While growing in its natural environment, this cactus can potentially reach up to 12” feet tall. But if cultivated, it tends to grow at a leisurely pace and only achieves a height that typically ranges between 25” to 30” inches tall. Spring is usually the optimal growing cycle of this graceful cactus plant, while winter happens to be its resting period.

While growing in the wild as a shrub, your Eve’s pin cactus is capable of producing a bunch of flowers. But it’s uncommon for blooming to happen when it’s under cultivation, so don’t hold any wild expectations when the growing season checks in. If you’re a witty gardener, you might be lucky enough to see a few reddish sepals that range between 4 to 8 mm long, on average.

It’s red, concave flowers usually appear around mid-spring to mid-summer. Typically, they can reach 3” inches tall and are bright enough to attract pollinators that find desert conditions far more habitable. There are, however, slim chances your Eve’s Needle will bloom while growing indoors or in a container.

The bright-colored blooms appear on the tips of the branches and they have a bright yellow or orange color in the middle. As it develops, this variety produces a multifold of sharp-pointed leaves, hence the name Eve’s needle cactus. The leaves on this shrubby cactus are held by a couple of branches that are attached to its base.

In case your Long spine cactus produces fruits, you can harvest some seeds and use them for propagation. The fruits have no spines, are dark-green, and edible. Later in this guide, however, we’ll reveal why seeds are the best option for propagation, so read on.

Like other cacti plants, there’s no debating that this variety will need more sunlight, compared to most other houseplants. Make sure to give it plenty of light, especially during summer when the growth hormones are potent. Even with a tendency of being a slow-growing plant, the right lighting requirement would help your Eve’s needle cactus sprout quite impressively.

But while it’s in its tender years, you need to introduce your needle cactus to full sunlight at a gradual pace, so using some partial shade would be beneficial towards the development of visually-appealing foliage. Growing under USDA hardiness zones 9 and above, that practically suggests the Eve’s Needle could survive under temperatures that are slightly above average.

In fact, limited access to the sun will make your Eve’s Needle cactus experience stunted growth. While on the other hand, being a plant that’s accustomed to the desert conditions, it would be hard for it to mutate to frosting conditions. So, the most facile remedy to counter cold temperatures would be to grow it in a container and move it indoors where it’s much easier to tweak the room conditions during winter.

To put into context, Eve’s needle can’t cope up with temperatures below 25 ° degrees Fahrenheit. The average indoor temperature work just fine, but you need to place the growing medium near a window so it gets the optimal light conditions it gravely needs. If you’re looking to grow your Eve’s pin cactus under partial shade, what matters most is making certain it gets at least 2 to 6 hours of direct sunlight each day. While we recommend exposing your cactus to the full sun, be careful not to overdo it since too much heat could scorch the most aesthetically pleasing parts of the plant.

The watering needs for your Eve’s Needle cactus vary from one season to another. So, a ‘one size fits all’ watering schedule wouldn’t work out. You only need to water it much often during summer when the temperatures are above average. Once winter kicks in, you want to space out the watering intervals.

If the temperatures are low, it would take much longer for the soil to dry out entirely even when the drainage capacity solid enough to protect your plant from the effects of overwatering. It’s also worth noting that since cacti plants have thick-walled succulent stems that naturally help them store water to kick through the dry months in the desert, you’ll therefore need to keep the moisture levels in the soil at a modest level.

Your Eve’s needle cactus doesn’t need much of it, but you also don’t want to neglect it since water helps it look youthful and free from wilting throughout the seasons. The Eve’s needle cactus has exceedingly low feeding requirements. But considering the fringe benefits of using fertilizer on succulents, you might be tempted to not overlook feeding your plant during the growing seasons.

Feed it lightly with manure tea and diluted fish emulsion. A balanced liquid fertilizer would also help your cactus get hold of all the essential nutrients it needs to have dense green foliage even during the tough months. The fertilizer needs to be in the ratio of 15-15-15 and soluble since if it’s highly concentrated, it could damage the roots.

As a rule of thumb, all succulents grow best in well-draining soil. About 30% of the potting mix also needs to be made of pumice which absorbs excess moisture, thus protecting the roots from rotting. Topdressing it with organic matter not only helps accelerate the rate of drainage but also acts as a reservoir of nutrients in case those in the soil have depleted.

If preparing such kind of potting mix seems like too much to do, especially if you’re a beginner, you can alternatively opt to work with the commercial cactus mix. Adding 2 parts of sand and 1 part of peat moss will help regulate the moisture levels in the soil. The prime time to transplant your Eve’s Needle cactus is during spring, but repotting it quite often isn’t safe for its overall growth and development.

You want to wait till when it’s root-bound or has outgrown its initial growing medium. I prefer transplanting my indoor succulents once every two years. After transplanting your cactus, water it evenly till excess water pours out through the drainage holes. It needs some time to adjust to the new medium and recover from any damage caused while transplanting.

One notable attribute about most cacti plants including the Eve’s Needle cactus is they have minimal grooming and maintenance. For the most part, you’ll only need to get rid of stems that look wilted or show signs of rotting. You can trim the stems to make them grow into a desired shape or size. If you’re not looking to harvest the fruits from your cactus, you can get rid of the flowers once their vigor trails off.

Drought tolerant houseplants tend to be unfussy and aren’t prone to any serious pests or diseases. This variety is, however, vulnerable to overwatering and underwatering. If the soil remains wet for too long, the roots will eventually begin to decay. Neglecting its watering needs, on the other hand, would cause your cactus to lose its blissful appearance quite frightfully.

The stems can also suffer from soft rot due to bacterial or fungal infections which are most commonly caused by not giving your plant the right lighting and watering requirements. Wounds on your plant could also be an entry point for bacteria. Make sure your cactus is getting proper air circulation to prevent the spread of fungal infections.

If there’s too much moisture in the soil, pests such as scale insects and mealybugs usually attack this succulent, especially if it’s growing indoors. Taking close attention to the nurturing requirement would help deter such dreadful conditions from happening.

How to Propagate the Eve’s Needle Cactus

Propagating this cactus can be done using seeds, stem, or root cuttings. But taking note of the results after propagating my succulents, I tend to find stem cuttings as the most fruitful option. So long as you have the right potting mix that drains well and ample access to the sunlight, your stem cuttings will develop roots in a short span, compared to other methods. To propagate your Eve’s Needle cactus without any alarming faults, you’ll need to:

The Eve’s Needle cactus fits both indoors and outdoors. It’s neither toxic nor invasive, so you won’t expose your kids or pets to any danger while it’s growing inside your living space. It’s not only heat resistant but also tolerates dry months quite impressively.

If you’re looking to grow this cactus outdoors, use a container to make it practically easier while moving it inside during winter. This variety sprouts opulently if grown close to its cousins such as the Old Man Opuntia, Gumby, or the Cane Cactus. It also amplifies the appearance of rock gardens, so if you have one in your home, you want to consider growing such kind of a cacti plant.

How to Grow & Care for the Cardon Cactus