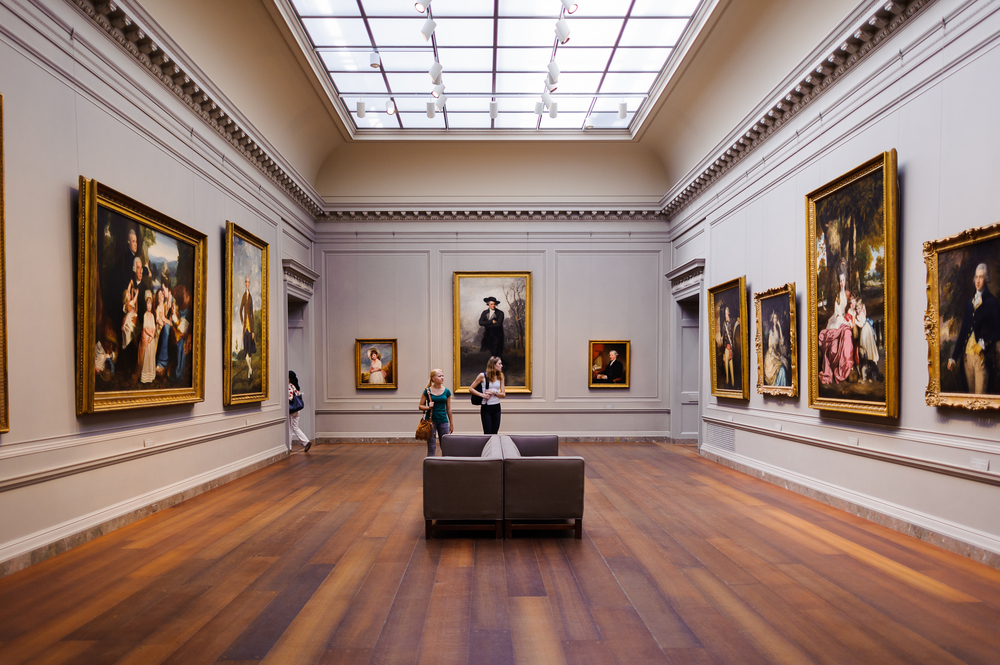 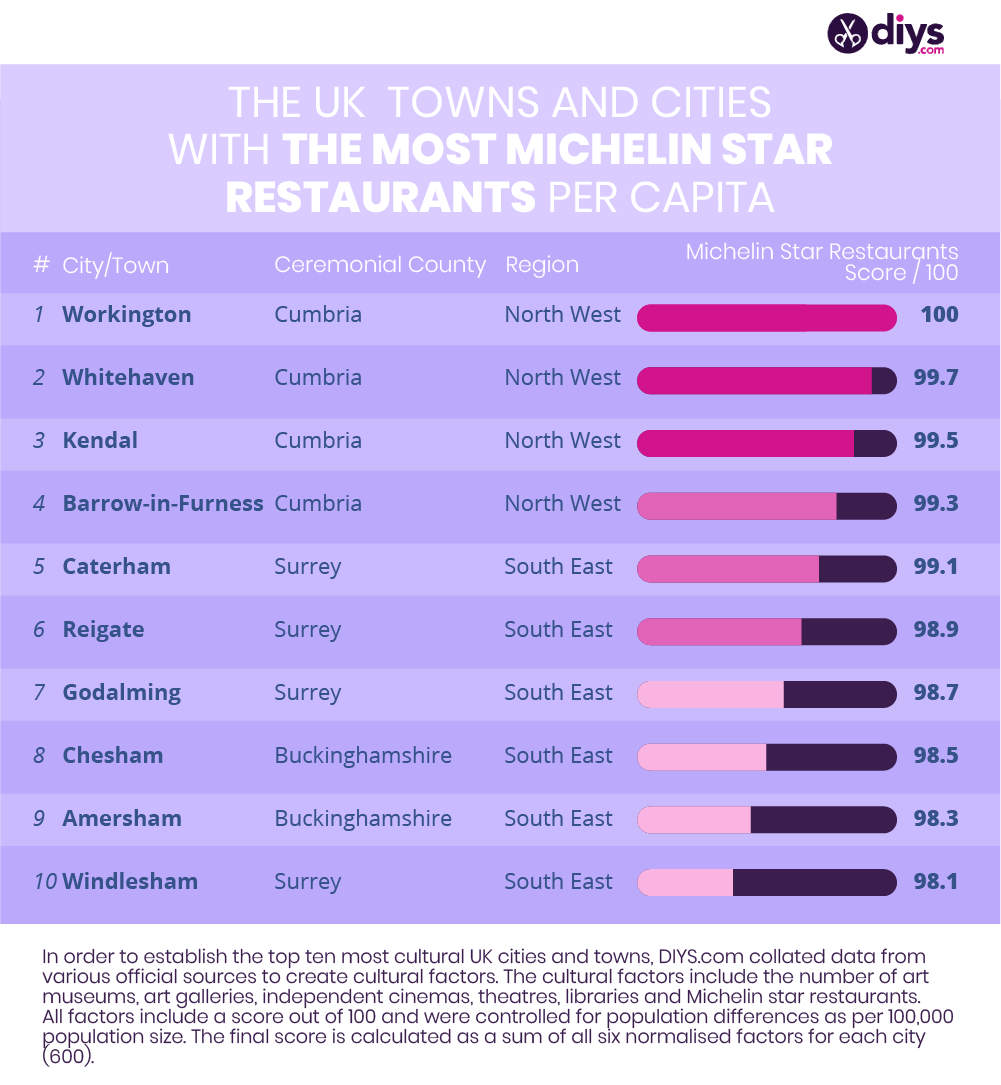 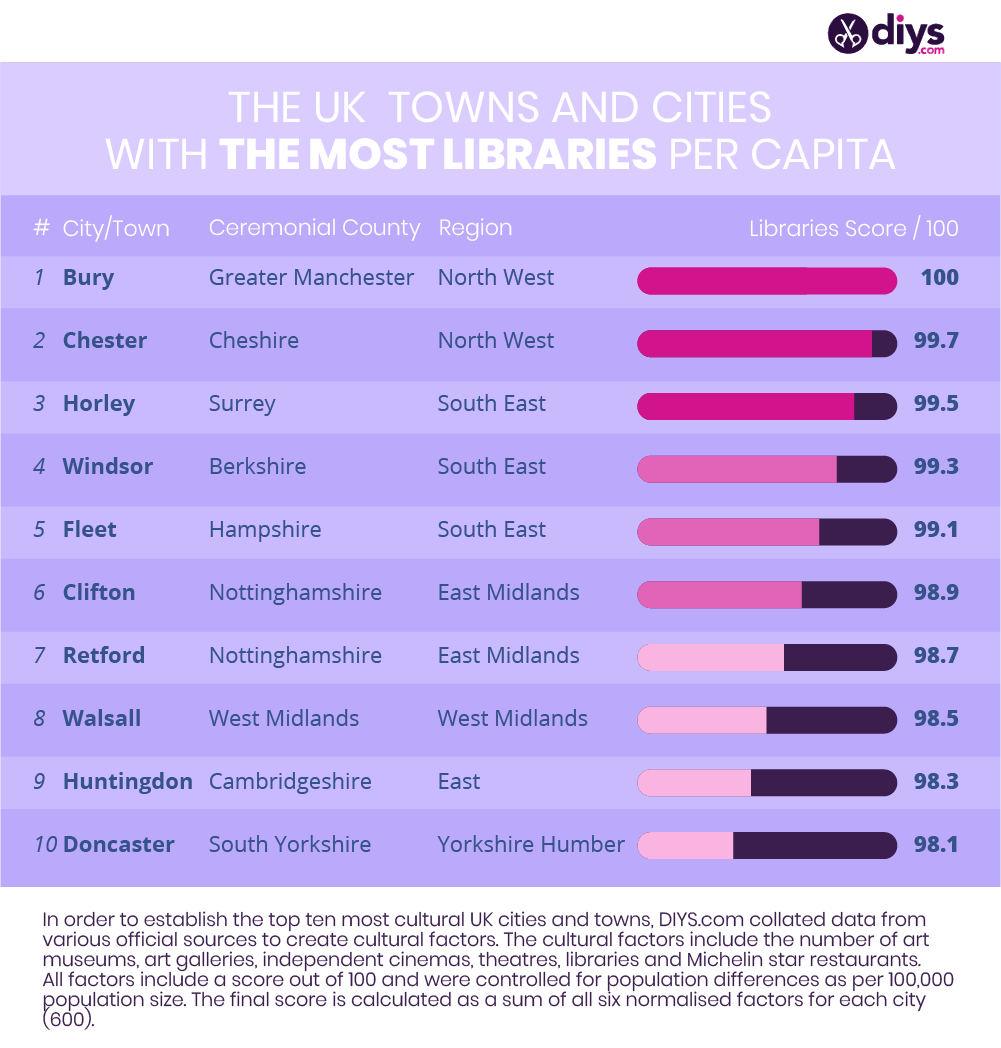 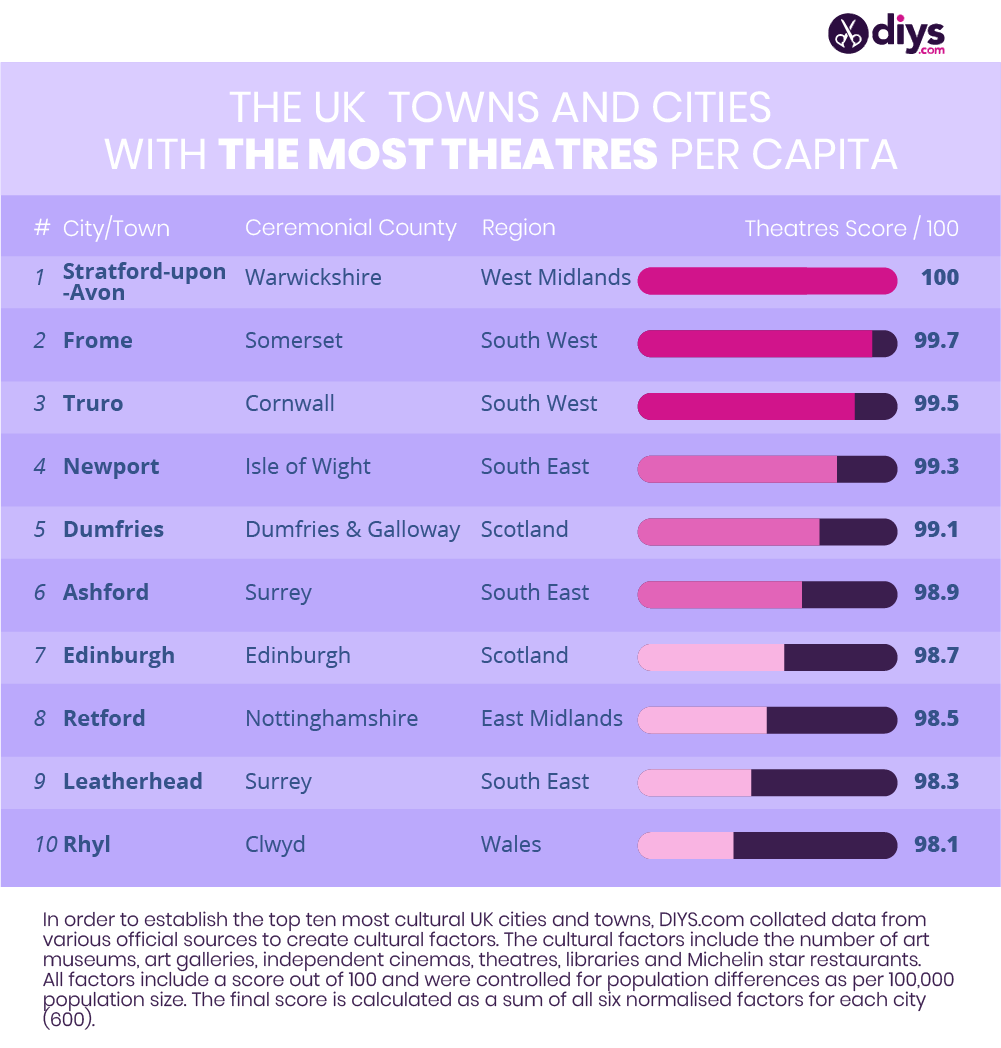 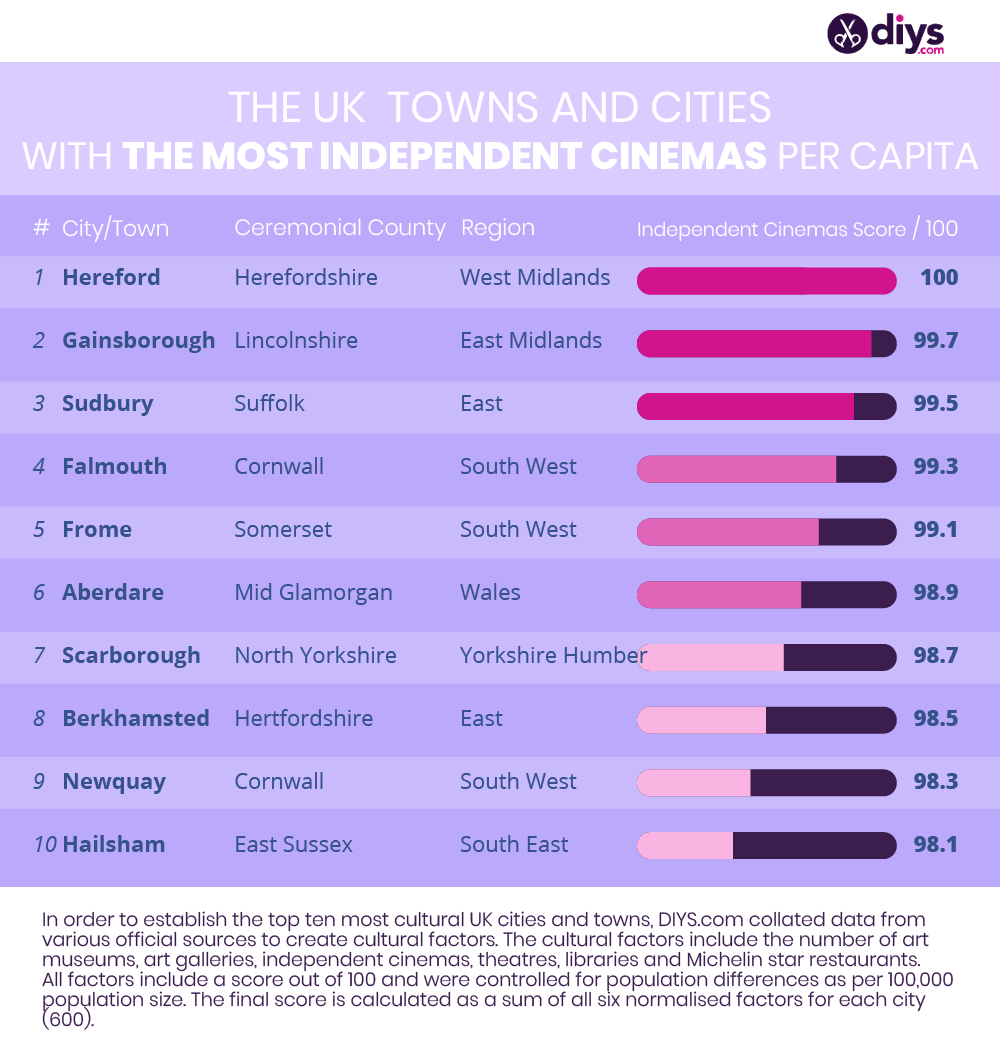 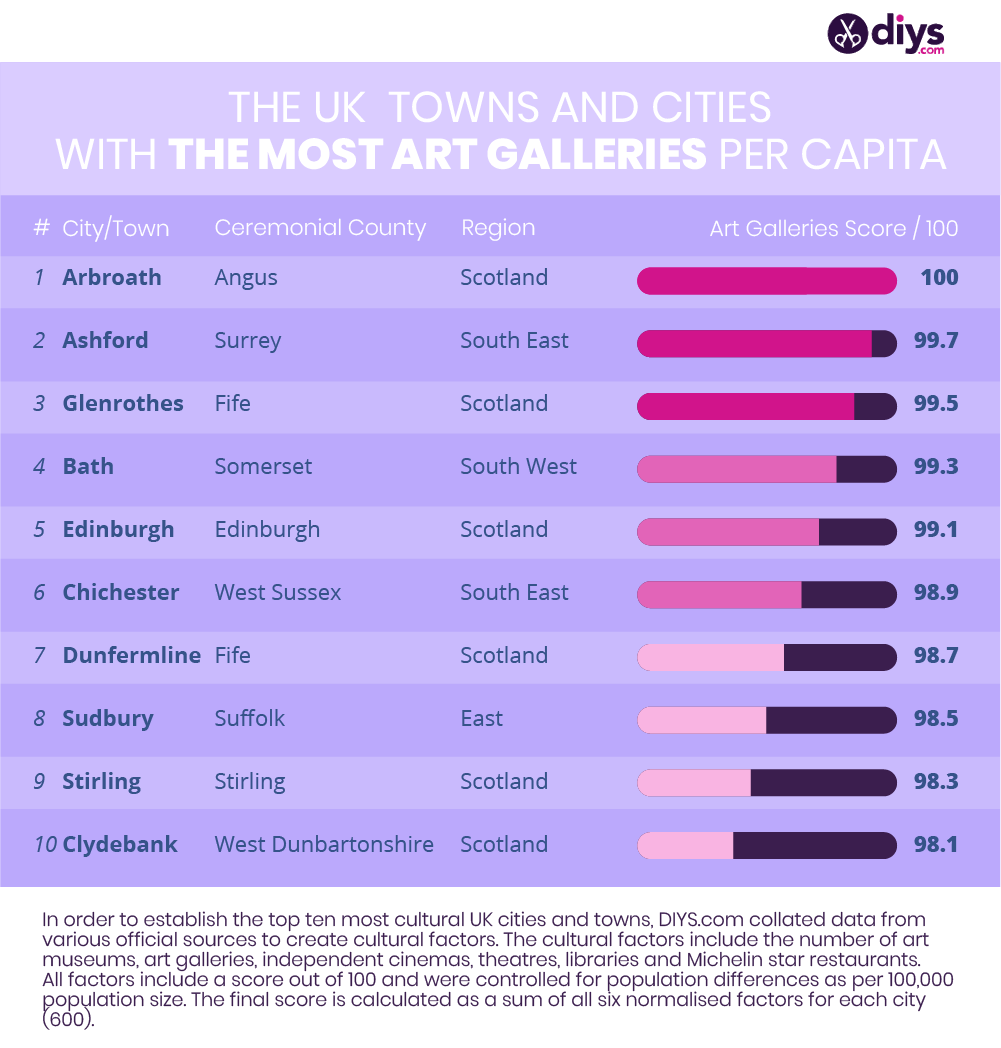 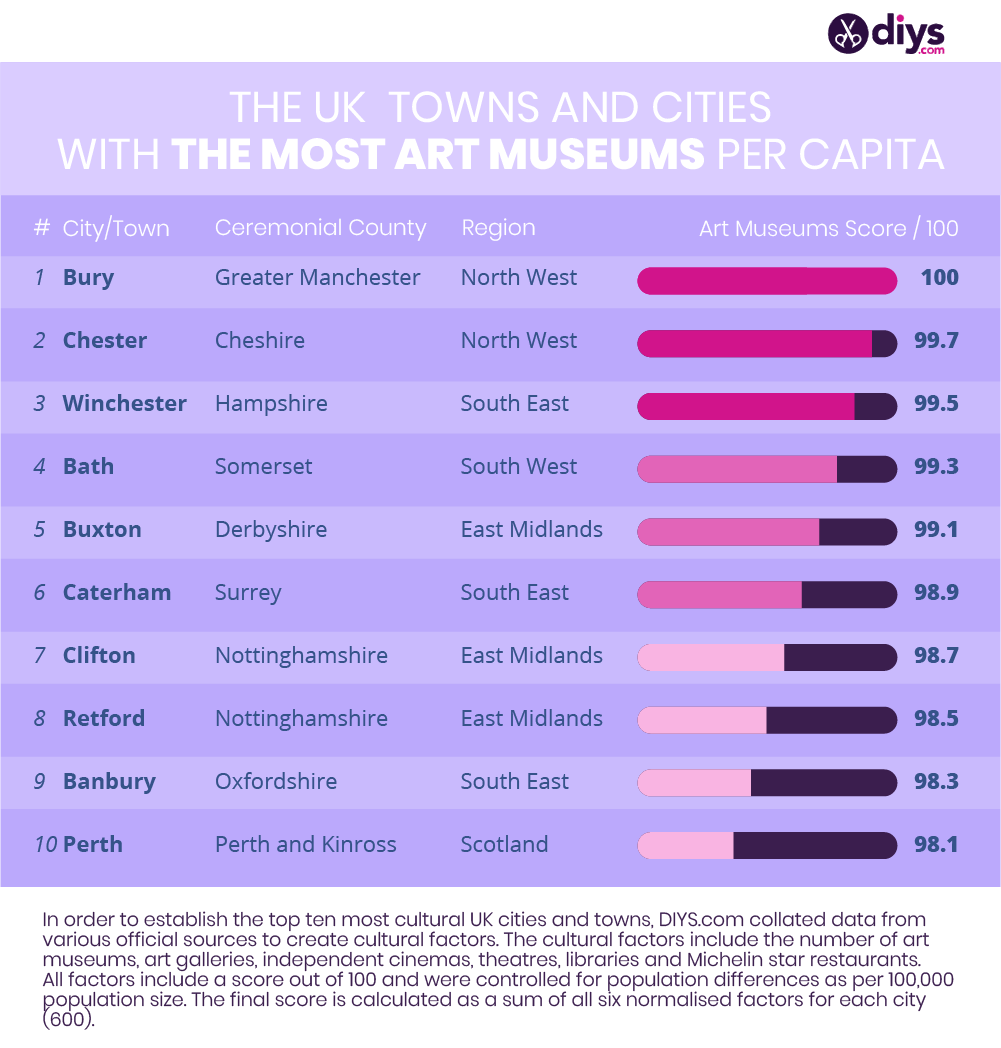 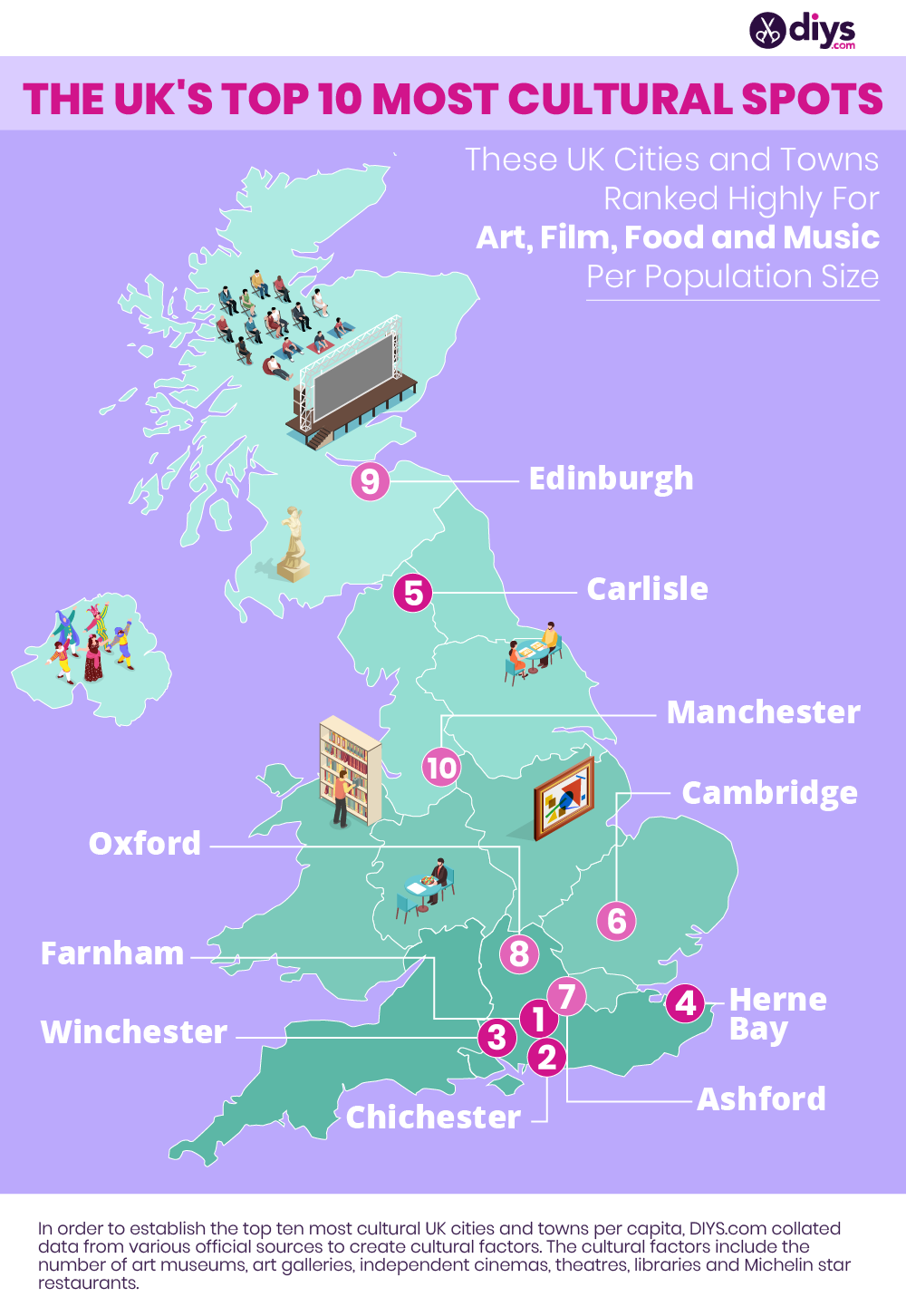 The UK is home to an abundance of history and culture, making it ideal for tourist visitation. From spectacular fine art exhibitions to highly sought-after theatre productions, the UK is littered with cultural hotspots just waiting to be discovered.

In a bid to reveal which UK locations are home to the most culture per capita, we analysed 500 UK towns and cities. We investigated the number of art museums, art galleries, independent cinemas, theatres, libraries and Michelin star restaurants in each city and town before calculating the number per 100,000 population. From this, we gave each location a possible score out of 100 for each cultural factor before being tallied up and given an overall score out of 600 and ranked.

The Most Cultured Cities and Towns in the UK

The Scores in Full

When it came down to the towns and cities scoring the highest for the number of art museums per 100,000 population, Bury in Greater Manchester came out on top, with an immaculate score of 100 out of 100. Following in second is Chester in Cheshire with a score of 99.7 out of 100, meaning that both of the top scorers for this factor were situated in North West England.

With a score of 99.1 out of 100, Buxton in Derbyshire placed as the fifth top-scoring location in the UK when it came to art museums, placing the East Midlands town comfortably among the areas in the UK with the most art museums per capita.

Meanwhile, Ashford in Surrey was home to the second most art galleries per 100,000 population, scoring 99.7 out of 100 for this feature. Yet another town or city from the South East also placed within the top ten, with Chichester’s 98.9 out of 100 ranking in sixth for art galleries.

Hereford in Herefordshire, West Midlands, placed as the UK town or city with the most independent cinemas per capita, boasting a solid score of 100 out of 100 for this amenity.

It was swiftly followed by Gainsborough in Lincolnshire and Sudbury in Suffolk, which had respective scores of 99.7 and 99.5 out of 100 for their number of independent cinemas in proportion to their populations.

Falmouth in Cornwall placed as home to the fourth most independent cinemas per capita, with a score of 99.3 out of 100. Meanwhile, Frome in Somerset, which is also based in the South West, had a score of 99.1 out of 100, leading it to rank in fifth.

The UK Towns and Cities With the Most Theatres Capita

When analysing the number of theatres in accordance with town and city populations, our study revealed Stratford-Upon-Avon to come out on top, with the West Midlands locality scoring 100 out of 100.

Meanwhile, Newport in the South East and Dumfries in Scotland placed in fourth and fifth respectively, with 99.3 and 99.1 based on the number of theatres.

The UK Towns and Cities With the Most Libraries Capita

For those with a keen interest in academia and literature, Bury in Greater Manchester is the place to be. The North West locality scored 100 out of 100 for its number of libraries paired with its population.

Placing second was Chester, which is also situated in the North West. Chester scored 99.7 out of 100 when it came down to the number of libraries in proportion to its population – the second highest total.

Horley and Windsor, both based in the South East, followed closely behind. Horley was awarded a score of 99.7 by the study when it came to libraries, whilst Windsor boasted a score of 99.3, placing fourth.

The UK Towns and Cities With the Most Michelin Stars Capita

Our study can reveal that Workington in Cumbria scored the highest, with a perfect score of 100 out of 100, due to its low population and high number of Michelin star restaurants nearby.

Whitehaven, Kendal and Barrow-In-Furness, each based in Cumbria, followed, with respective scores of 99.7, 99.5 and 99.3 out of 10 for nearby Michelin star restaurants. Meanwhile, four Surrey-based towns and cities also ranked among the top 10, including Caterham, Reigate, Godalming and Windlesham.

The Most Cultured Regions in the UK