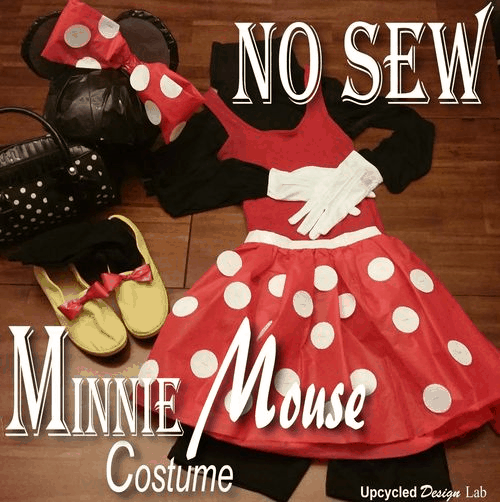 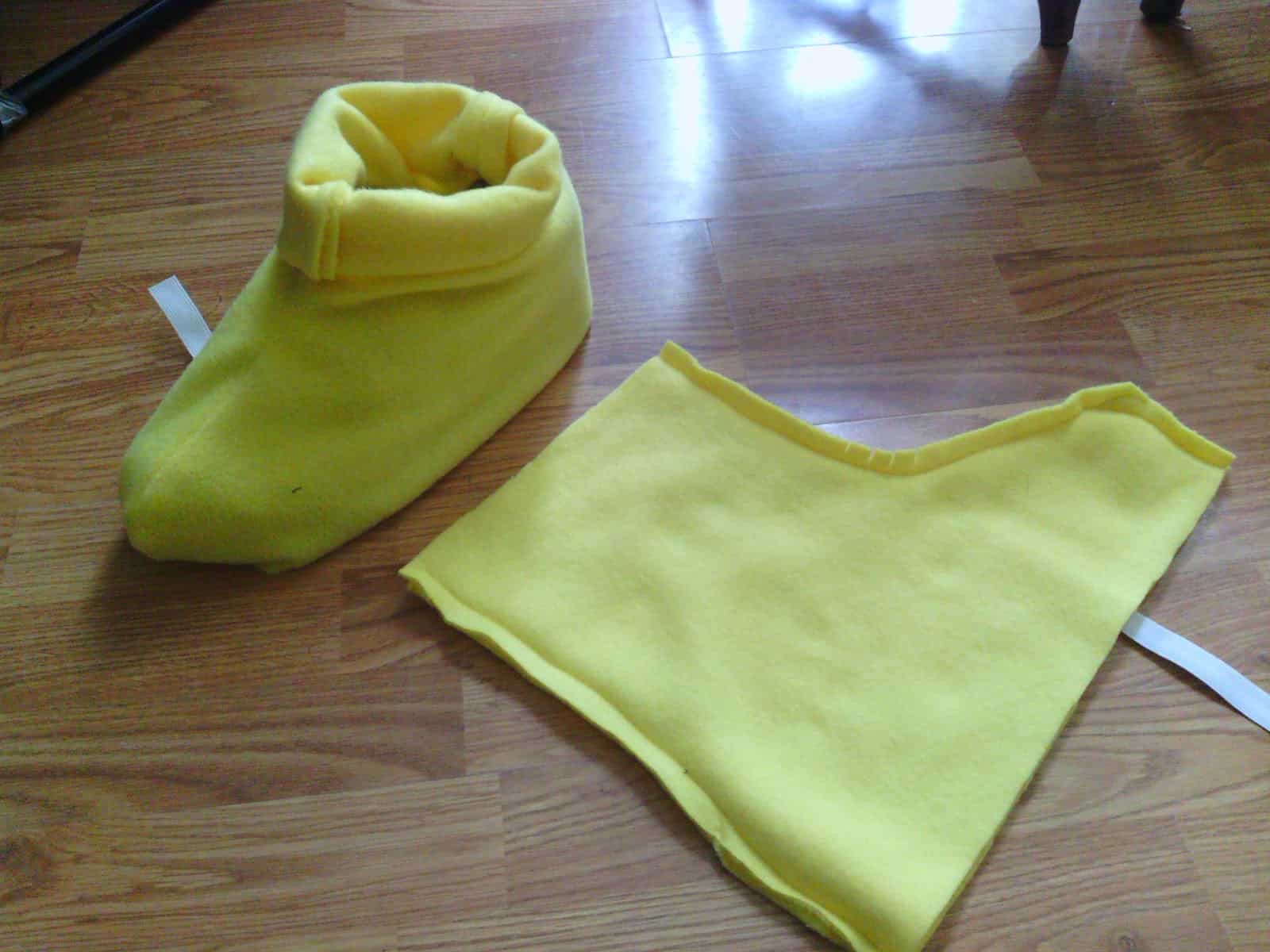 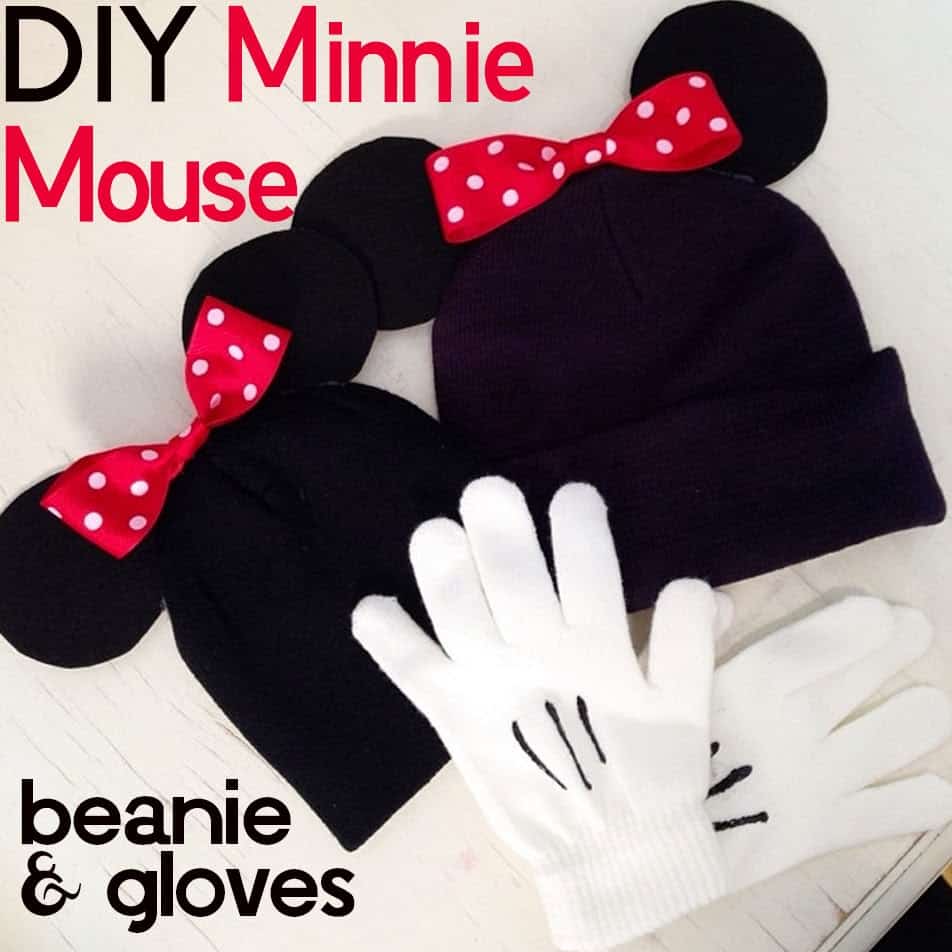 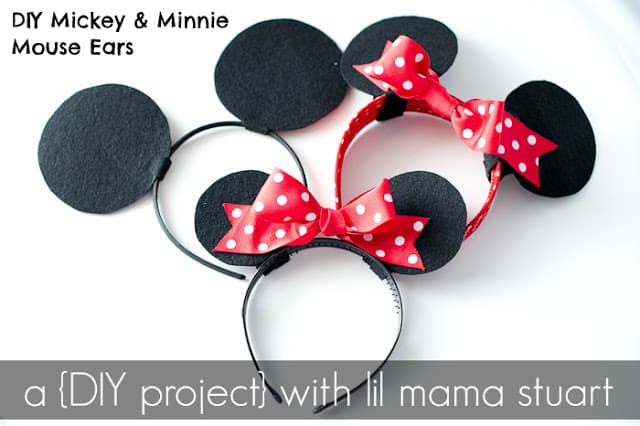 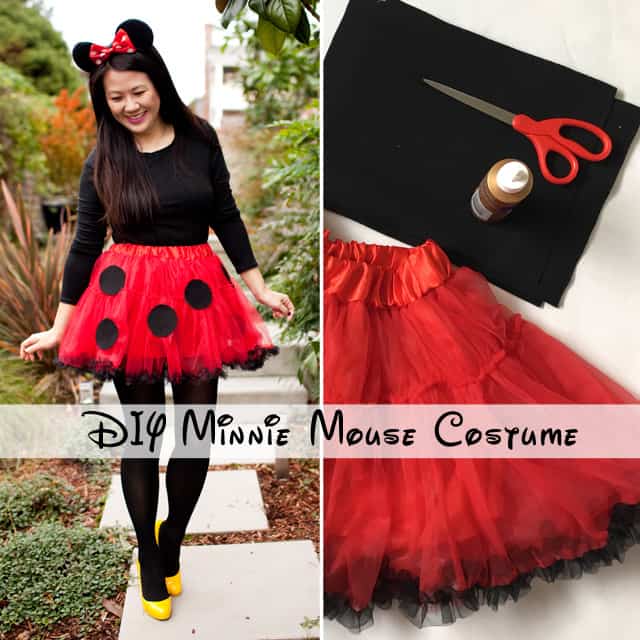 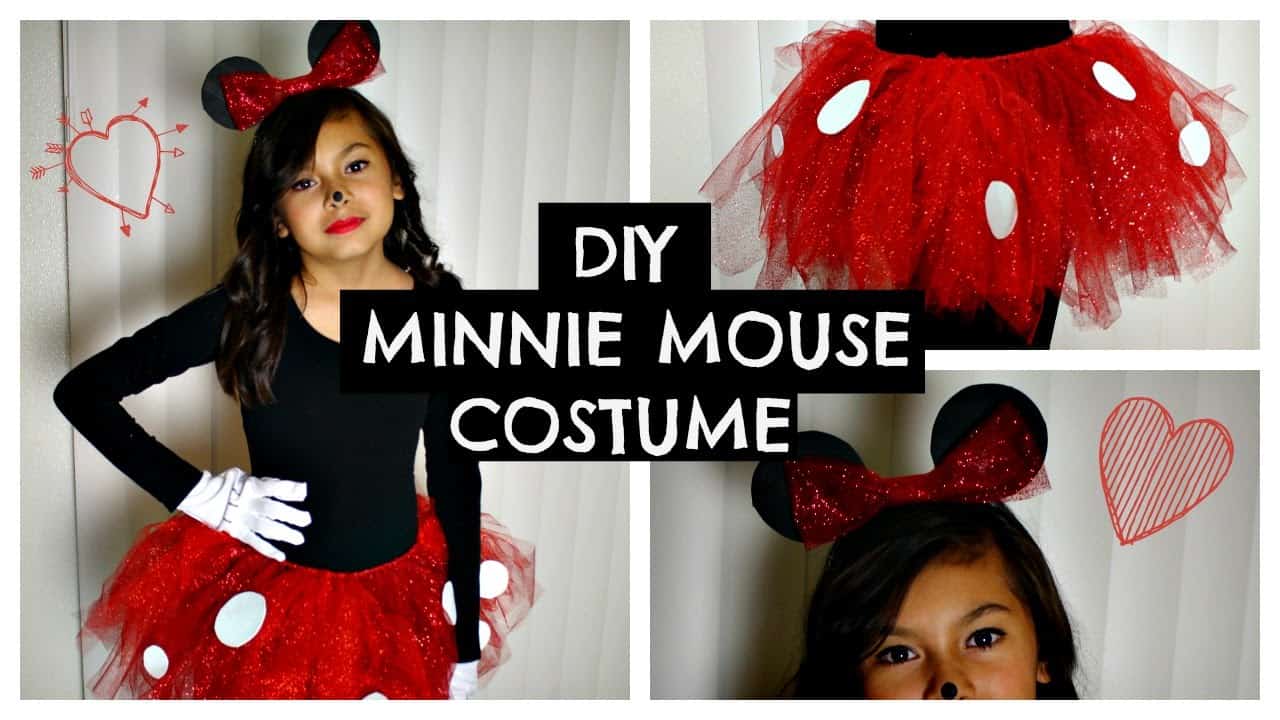 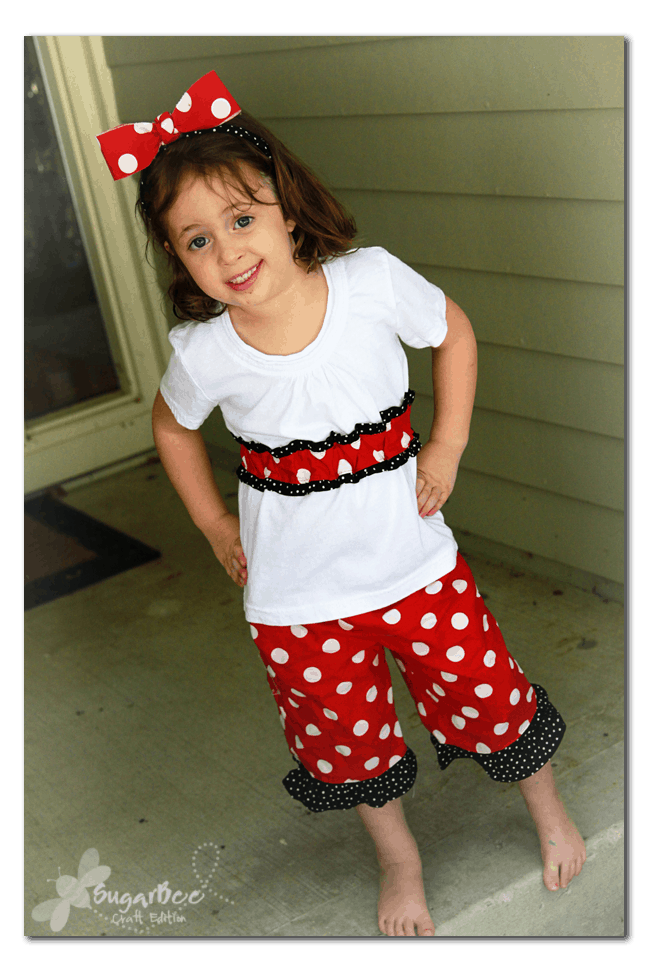 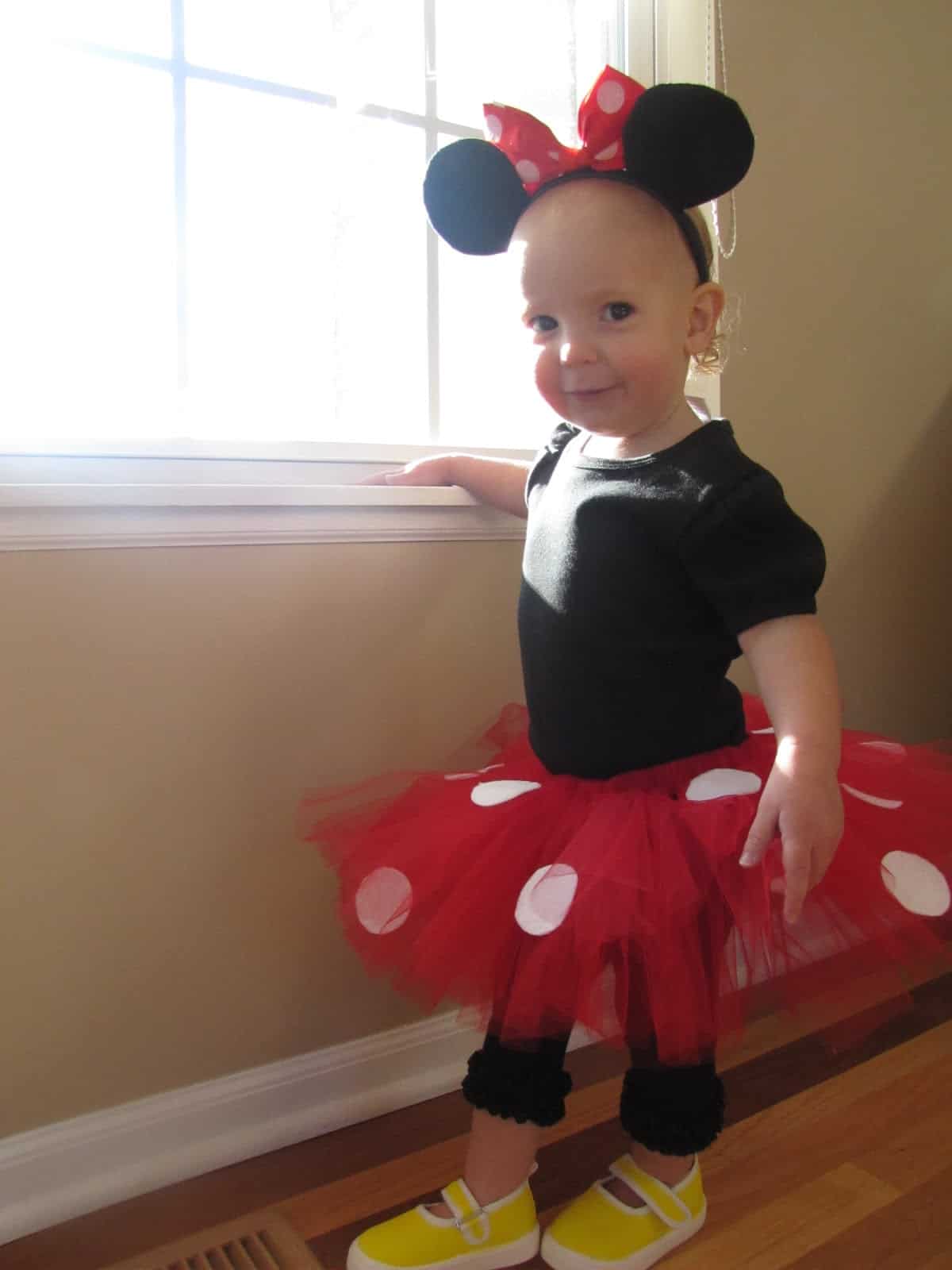 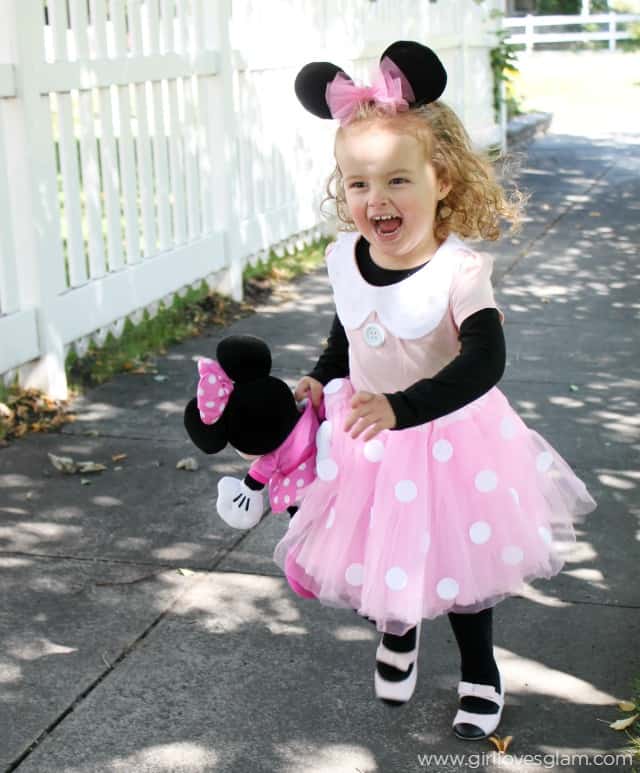 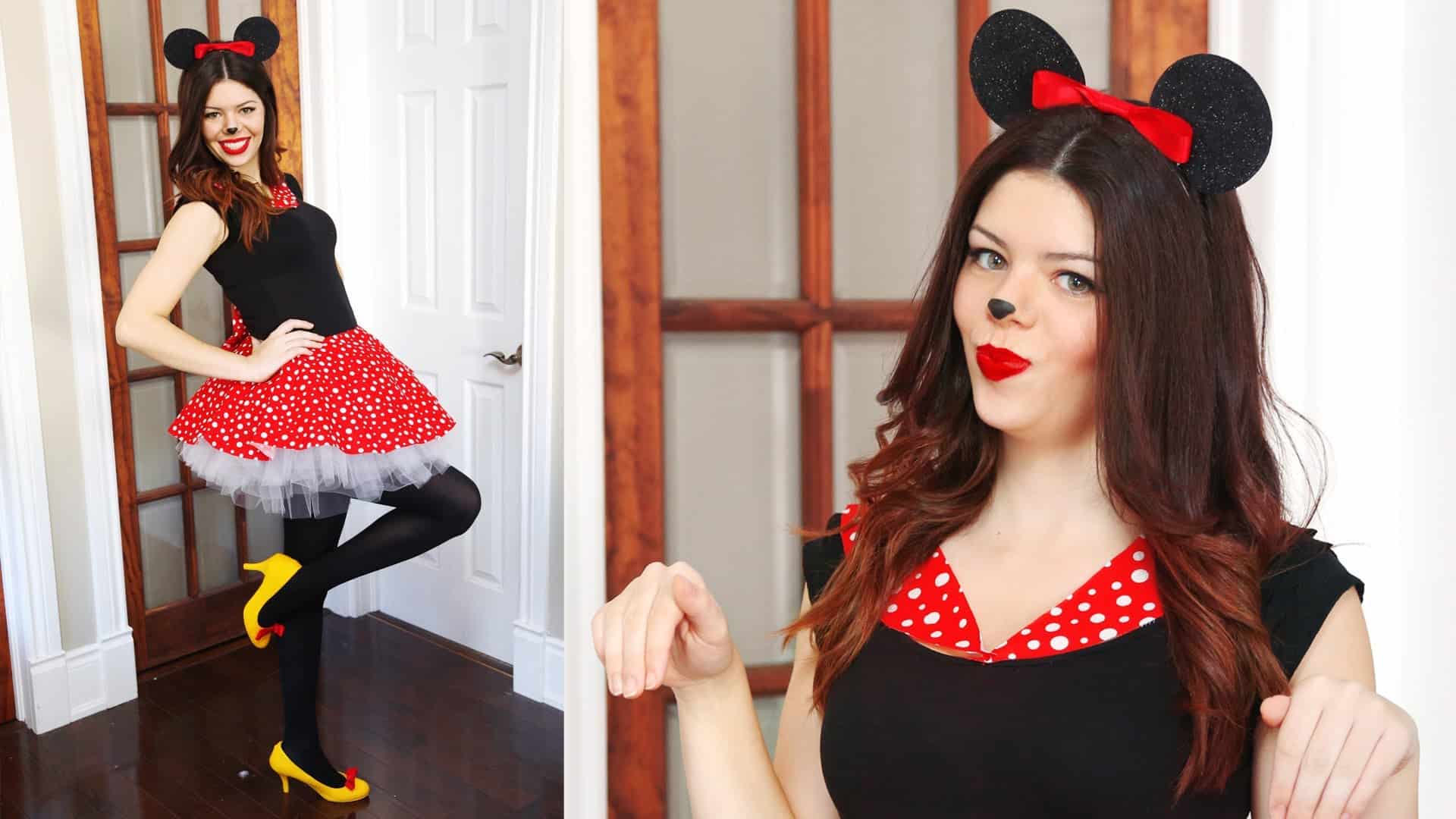 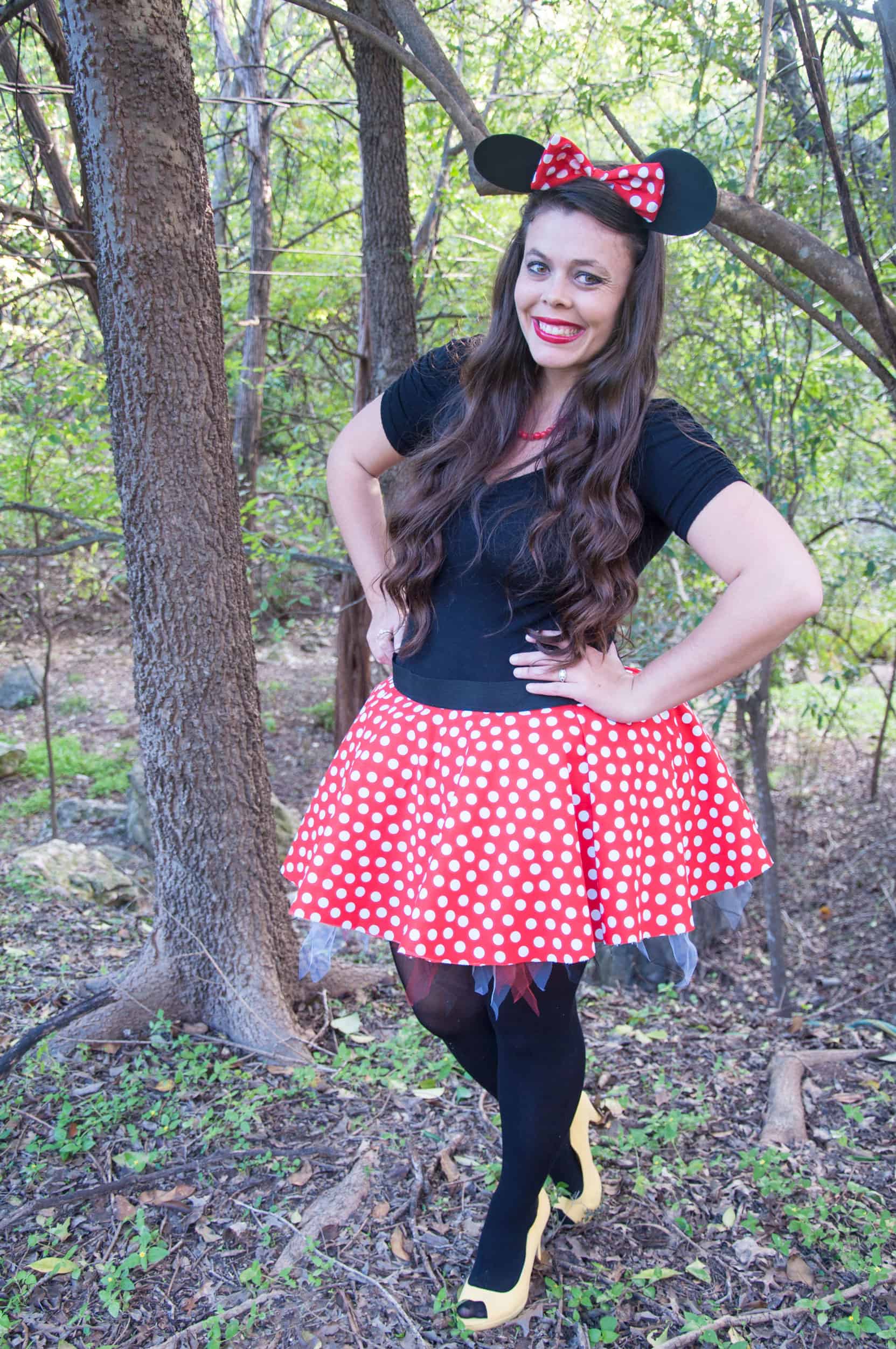 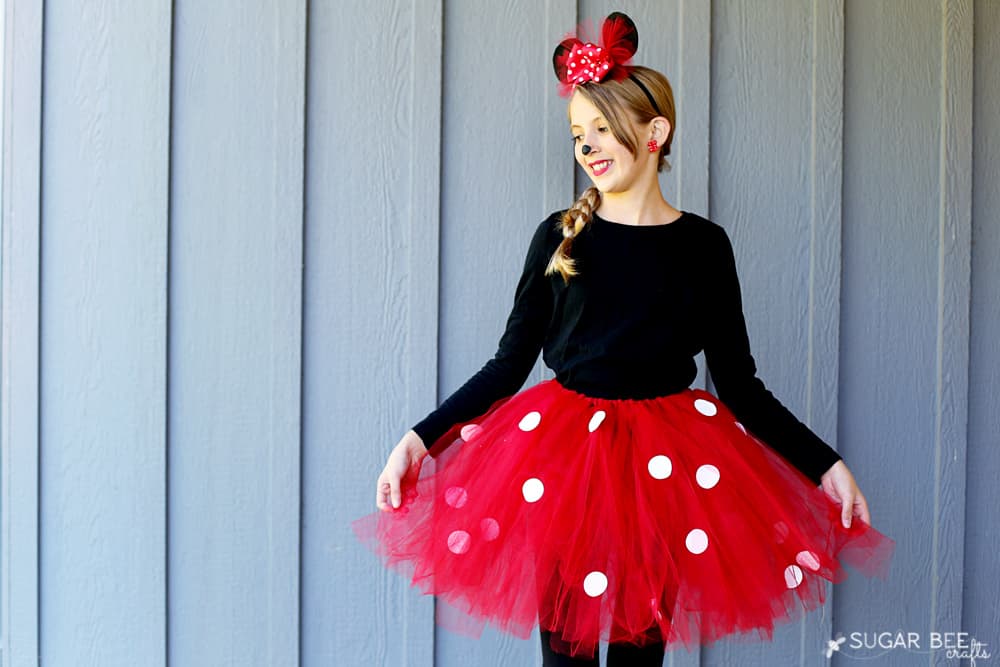 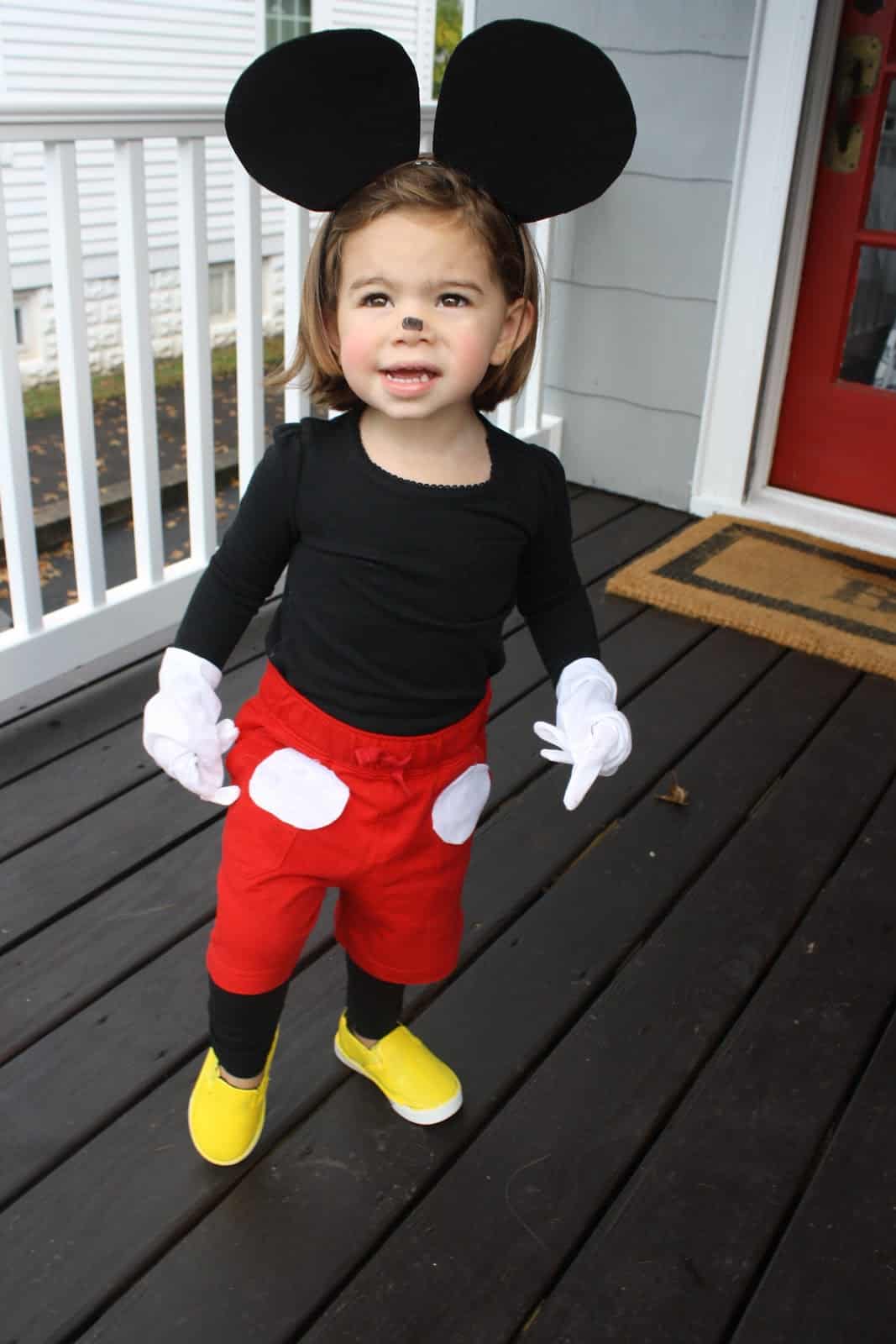 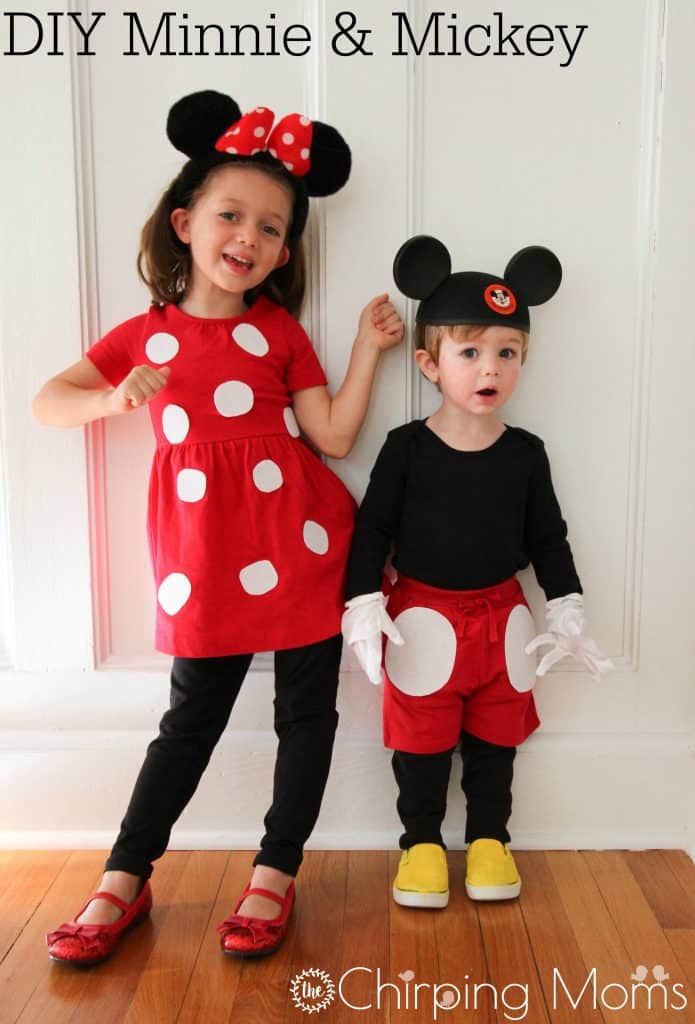 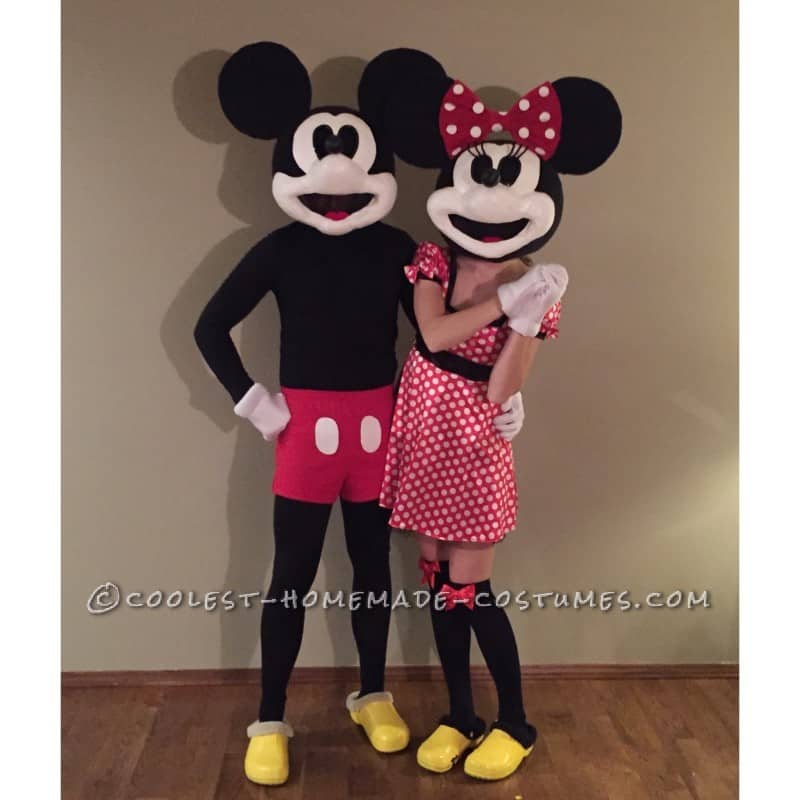 When it comes to making costumes, we’ve never been the kind of family that reserves the fun for just Halloween! In fact, we can hardly keep our kids from dressing up in costumes on any given day, no matter the day of the week. That’s why we’re always making fun character themed outfits for them to dress up in. Heck, sometimes we even make them for ourselves! Just because we’re adults doesn’t mean that we don’t go to themed parties and dress up for kids’ birthdays and such. Recently our kids went through a rather large super hero phase where they were always asking for our help making bits and pieces of various super hero outfits, like capes and masks, but they always find something new in a few weeks before repeating and going back to what they loved before. That’s why we don’t mind making them just about any costume they want! Recently, they’ve been on a huge Disney kick since we got back from a family trip to Disney World, so we’ve been looking for the best way to making Minnie and Mickey Mouse costumes. We were pleasantly surprised with how much help there was out there!

Just in case your kids have been asking you to help them dress up like Minnie or Mickey Mouse too, here are 15 of the best ideas and tutorials we found in our search.

Alright, we know we just talked about making costumes for our kids, but if we’re being honest, we absolutely love getting in on the fun. Here’s a great tutorial that shows you how to make an adult Minnie Mouse costume that’s pretty much just as cute as any kids’ outfit you’ll make for your little ones. Find out how these cute foamy ears and this cute skirt with a voluminous under layer were made on All That Glitters is Gold.

When you picture your kids dressed up as Minnie Mouse, do you always picture the polka dotted skirt being a tutu? Well, then we think you should make an adorable polka dotted tutu! Just in case you’ve never made one before (or maybe if you know how to make a tutu but you’re not sure how to put the polka dots on), here’s a great tutorial from Sugar Bee Crafts outlining all the steps for you!

Have you actually been looking for ways to help your kids make costumes but you’re not a sewing enthusiast and your skills are very basic, so you’re been trying to find alternative ways to costume without sewing? Then this Minnie Mouse costume tutorial outlined on The Sorry Girls is the perfect thing for you! We also like this tutorial because the techniques they teach you could be used to make an outfit of any size.

When our daughter was smaller, she went through a phase where all she would wear was pink. She was so in love with pink that she wanted every single little thing she played with, ate, or talked about to be pink. So, naturally, when it came to playing dress up, it didn’t matter what the classic colours of whatever outfit we were creating for her were; she just wanted it to be pink. That’s actually how we came across this adorable little pink Minnie Mouse costume featured on Girl Loves Glam. Of course you could make it in any colour, but we stuck to the original pink and our little girl looked cute as a button in it!

We know we already talked about small tutus above, but what if you were thinking of making one that’s a little bit smaller and a little bit more of a classic, stiff shape? Well, in that case, we think you might appreciate this adorable little creation featured in the tutorial on School Time Snippets! They show you how to make it by tying knots and then gluing felt circles all over to make the dots when you’re done tying.

We’ve talked a lot about cute little Minnie outfits so far, but she’s not only only Mouse out there with a fun outfit to dress up in! Just in case you’ve got a Mickey to go along with your Minnie, here’s a tutorial for that kids’ outfit too. We like this guide in particular because it doesn’t require you to make clothing pieces from scratch. Instead, they show you how to embellish clothing in the right colour with the classic white polka dots. Get the full instructions on The Chirping Moms.

When you started looking up Minnie Mouse inspired costumes, were you actually thinking of something more along the lines of and adorable outfit inspired by the classic look rather than a full out recreation costume? Well, if you’ve got at least some experience with sewing, then think wonder if maybe you’ll prefer this cute little ruffled outfit featured on Andrea’s Notebook! We love the way the ruffle in the middle of the shirt balances out the cut ruffles all along the bottom of the pants.

If you’re going to make an adorable toddler look like Mickey Mouse, would you prefer to make him or her look like the most wonderfully exaggerated, irresistibly cute little Mickey you’ve ever seen in your whole life? We’d fully support that decision, but we’d also suggest following this funny little tutorial for a toddler or baby Mickey costume outlined by The Chirping Moms. They show you how to make an extra cute version of baby Mickey featuring funny jumbo ears that make the whole look even better than it would have been otherwise!

Has all this talk about playing dress up and looking like Mickey and Minnie Mouse got you in the spirit of costuming too and now you’re already thinking that maybe you and your partner should think about going as Mickey and Minnie for Halloween, even though that’s months away? Well, we always plan our Halloween costume months in advance too o that we have lots of time ti make it ourselves! For your consideration, here’s a Minnie and Mickey costume that, rather than just looking like the current cartoons you already know, hearkens back to the vintage movies from the early Disney days! Find out how these impressive full cartoon head pieces were made on Coolest Homemade Costumes.

Perhaps your little ones have been asking for your help making an awesome Minnie Mouse costume, but they’re old enough to have some style input and their main request is that it be as sparkly as possible? Then we’re here to tell you that glitter tulle is about to come in major handy for you! Check out how Duzieluv made a sparkly polka dotted tutu and ears with a matching hair bow with enough sparkly that anyone would love it.

Perhaps the costume you need to make is actually on that has to be finished very quickly and on a budget, but that’s okay because you only need it to last for one party or event? Then here’s a great tutorial for making a cute little Minnie Mouse skirt out of a pre-made tutu and some paper circles rather than tulle tying or making something more costly and expensive. Check out how simple this look was to put together on I Am Style-ish.

Perhaps you don’t necessarily need the entire Mickey or Minnie Mouse costume complete with an actual outfit to keep the kids happy when they have dress-up afternoons? Maybe just the ears will do! In that case, there are plenty of fun ways that you can make Disney inspired mouse ears, but here’s a great, clearly outlined tutorial that will help you make the classics. See the whole idea in more detail on A Day With Lil’ Mama Stuart.

13. Mickey and Minnie beanies and gloves

Are you actually thinking about these Disney costumes as a possibility for Halloween and you’re simply preparing months in advance, but you know it’ll be kind of cold by then where you live and you want to make sure that your kids stay nice and warm while they’re Trick or Treating? In that case, we think you might appreciate these adorable ears and gloves that look just like the cartoon but are really made from a set of toasty warm toques and winter gloves! Kandee J shows you how to put ears and bows on the hats, as well as how to add cartoonish detail to the gloves.

Were you actually really taken with the idea of making the vintage cartoon looking Minnie and Mickey costumes but you’re the kind of accurate and invested crafter who prefers to recreate things in as much similar detail as possible, so you’re looking for even more cartoonish shoes than you saw in that tutorial? Then we’d absolutely suggest checking out these hilarious felt Mickey Mouse style shoes. Lillian The Domestic Engineer guides you through making the pattern and the final piece, as well as how to slip them on over your regular shoes.

Did we really catch your attention when we started talking about last minute Minnie Mouse costumes because that’s exactly what you’re looking for but you’re actually in such a rush or working on such a budget that unfortunately you don’t even have time to run out and get yourself a pre-made tutu? Then start rummaging through the Christmas bin and pull out all that red tissue paper you had left over from last year, because Upcycled Design Lab has a tutorial for a last minute tissue paper Minnie Mouse skirt (and suggestions for the other pieces of the outfit too) that will really help you out.

Have you made Mickey or Minnie Mouse costumes before but using different techniques and accessories than we’ve shown you here? Tell us all about them or link us to photos or tutorials in the comments section!