If you’re a person who enjoys eating flavourful meat based dishes and you’ve never tried bulgolgi before then we’re very sorry to have to tell you that you’ve been missing out on something extremely delicious indeed! Bulgolgi is actually a Korean BBQ beef dish that’s simple to make but that packs an impressive punch in terms of flavour. In fact, it’s so flavourful that the word “bulgolgi” actually directly translates to “fire meat”. This might lead you to believe that Korean BBQ beef is very spicy, but this isn’t actually always the case. Sometimes it’s prepared to be sweeter and sometimes it’s very tangy, but it’s traditionally prepared over a Korean BBQ that involves an active flame inside and that’s how the original dish got its name. Now that the rest of the world has caught onto how utterly scrumptious Korean BBQ beef really is, all kinds of new ways to prepare it have emerged and we’ve been feeling pretty determined lately to learn some of those recipes and try them out for ourselves.

If you’re feeling just as interested in the idea of exploring new and traditional ways to prepare bulgolgi as we have been, if not more, check out this list of the 15 best Korean BBQ beef recipes that we’ve come across in our search so far! 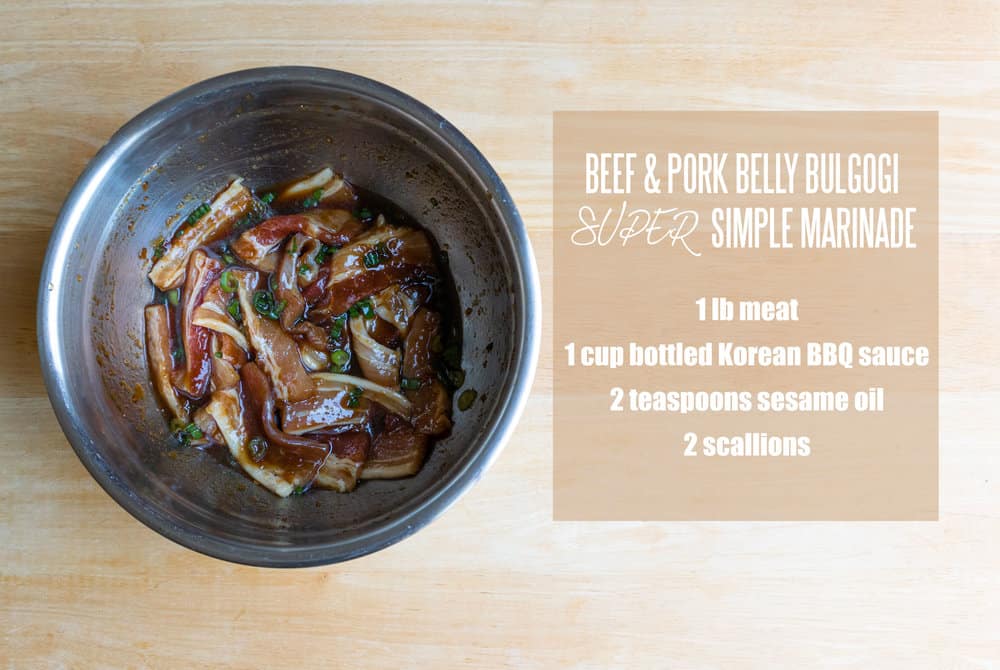 If you’ve never actually tried making bulgolgi before and you’re always a little hesitant the first time you make something new and unfamiliar, then it makes total sense that you’d want to stick to the basics and try something rather simple first. That’s why caught our eye so well about this first recipe from Vicky Pham. Their tutorial teaches you how to make a very simple classic marinade for beef or pork bulgolgi and also gives you easy-to-follow cooking instructions for a perfect outcome. 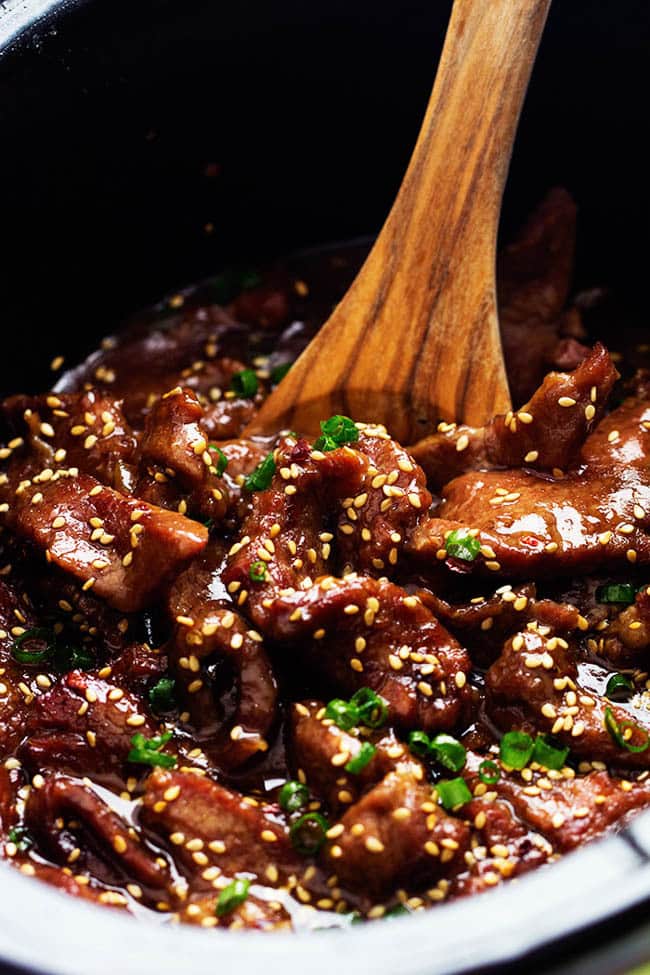 Despite the fact that you are a foodie who loves to make your own foods from scratch, are you also still a busy enough person that your slow cooker frequently swoops in to save the day from another takeout meal or something with less flavour? Then we have a strong feeling that you’ll really appreciate the very simple way The Recipe Critic has outlined how you can make tasty slow cooker Korean beef. 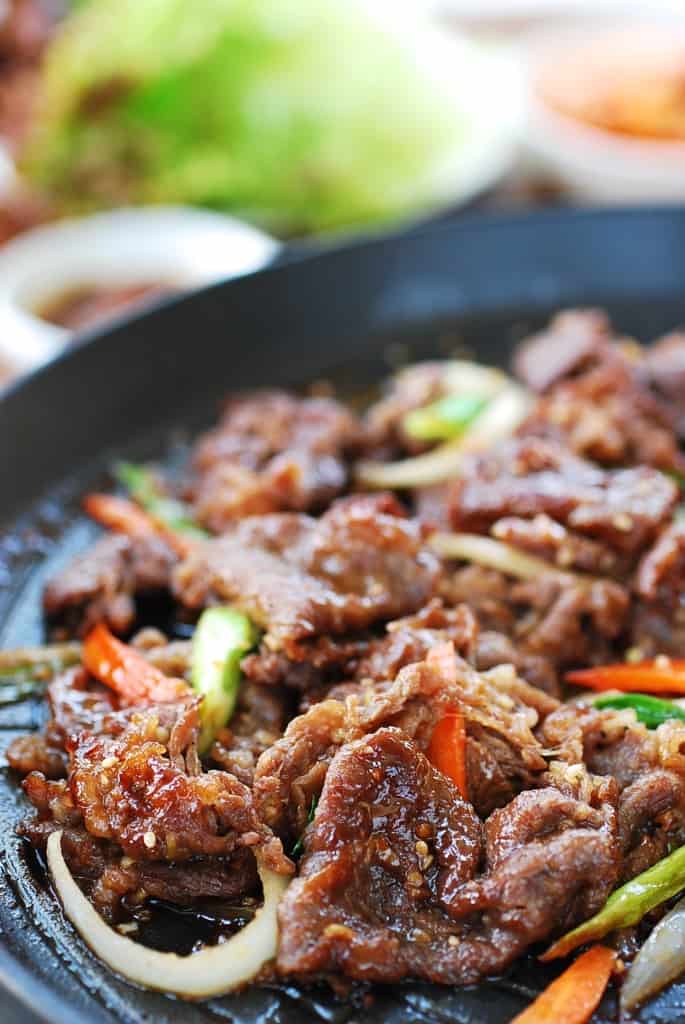 If you’re going to put in the time and effort it takes to make bulgolgi, would you actually much prefer to learn how it’s done in the entirely traditional way, just to make sure that you’re really getting the authentic experience and flavour? In that case, we’d absolutely encourage you to take a look at how Korean Bapsang made this bulgolgi, or Korean beef, just like you’d find it at a Korean BBQ restaurant. 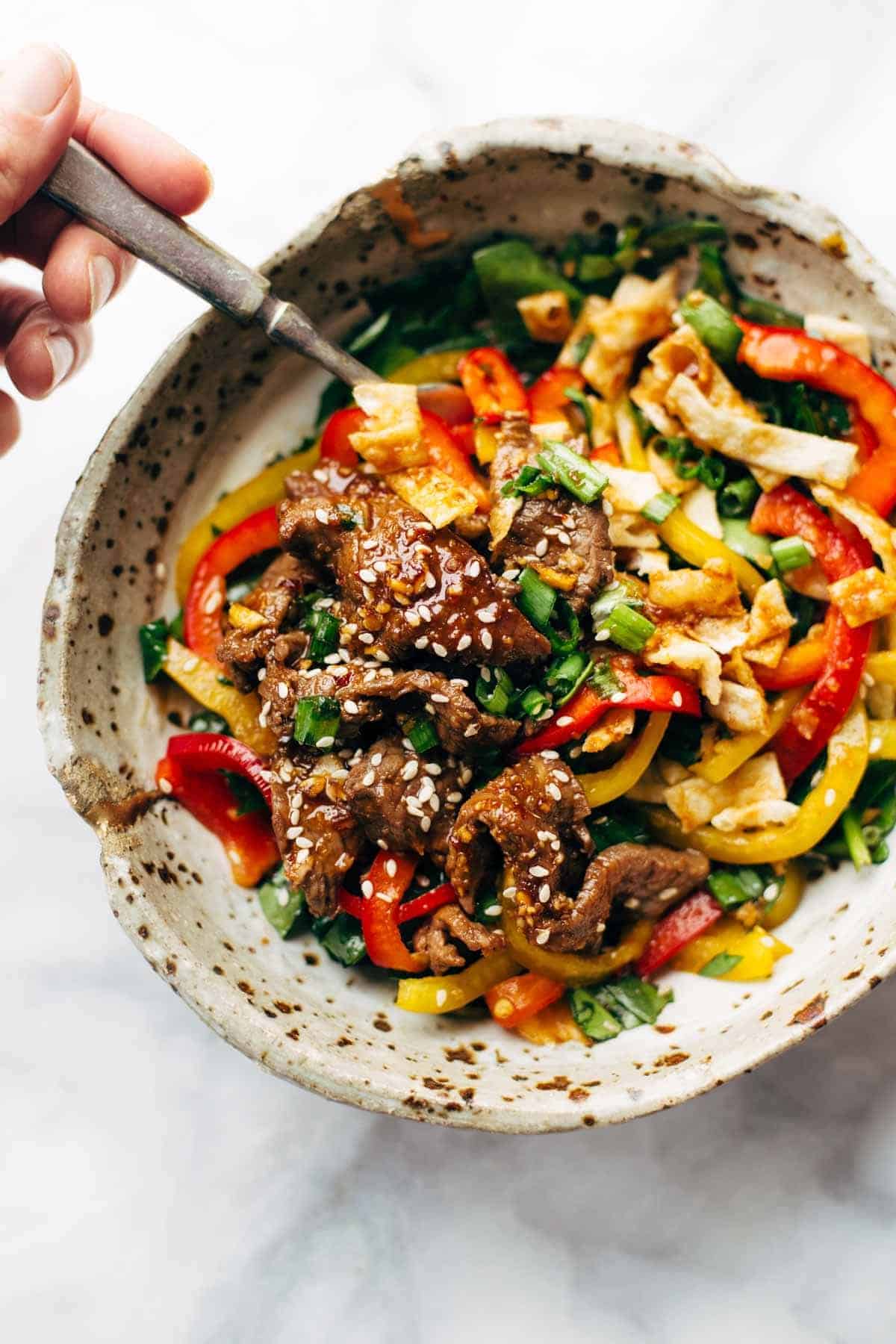 Once you’ve learned how to actually prepare the Korean BBQ beef itself, what do you do with it and how can you serve it as part of a full, nutritional meal? Well, the answer to that question is actually many different things, but here’s one of our favourites: a homemade Korean BBQ steak bowl with spicy sesame dressing! We have Pinch of Yum to thank for this one. 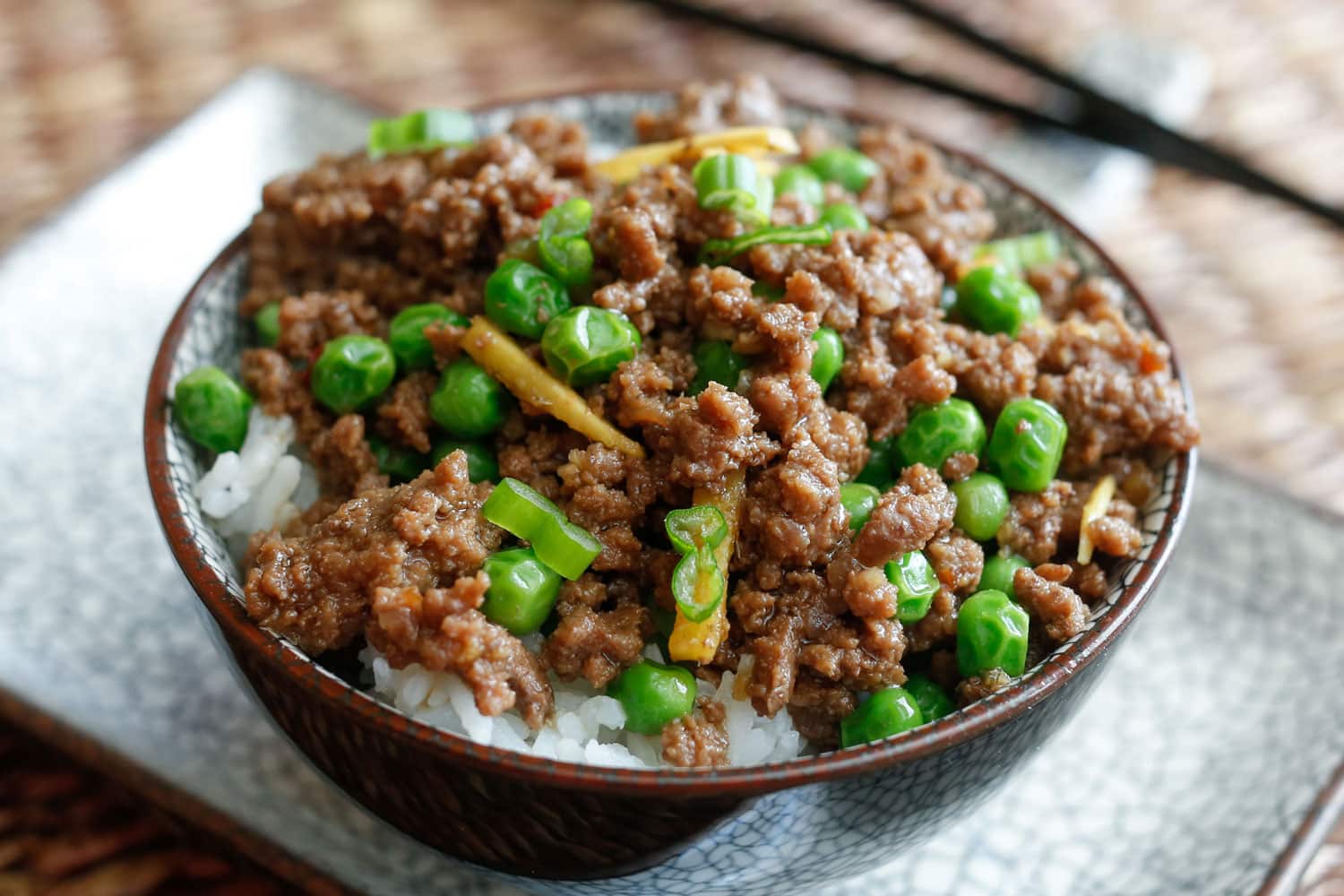 As determined as you are to learn how to make authentic bulgolgi eventually, are you also a total beginner in the kitchen and still learning a thing or two about making your restaurant favourites from scratch? In that case, we think you might just be the perfect person to give this next recipe from Barefeet in The Kitchen a try. Their tutorial shows you how to make a very simple “cheater” version of Korean beef that’s easy enough for beginners but still tastes great. It will tide you over until you’re ready to try the real thing. 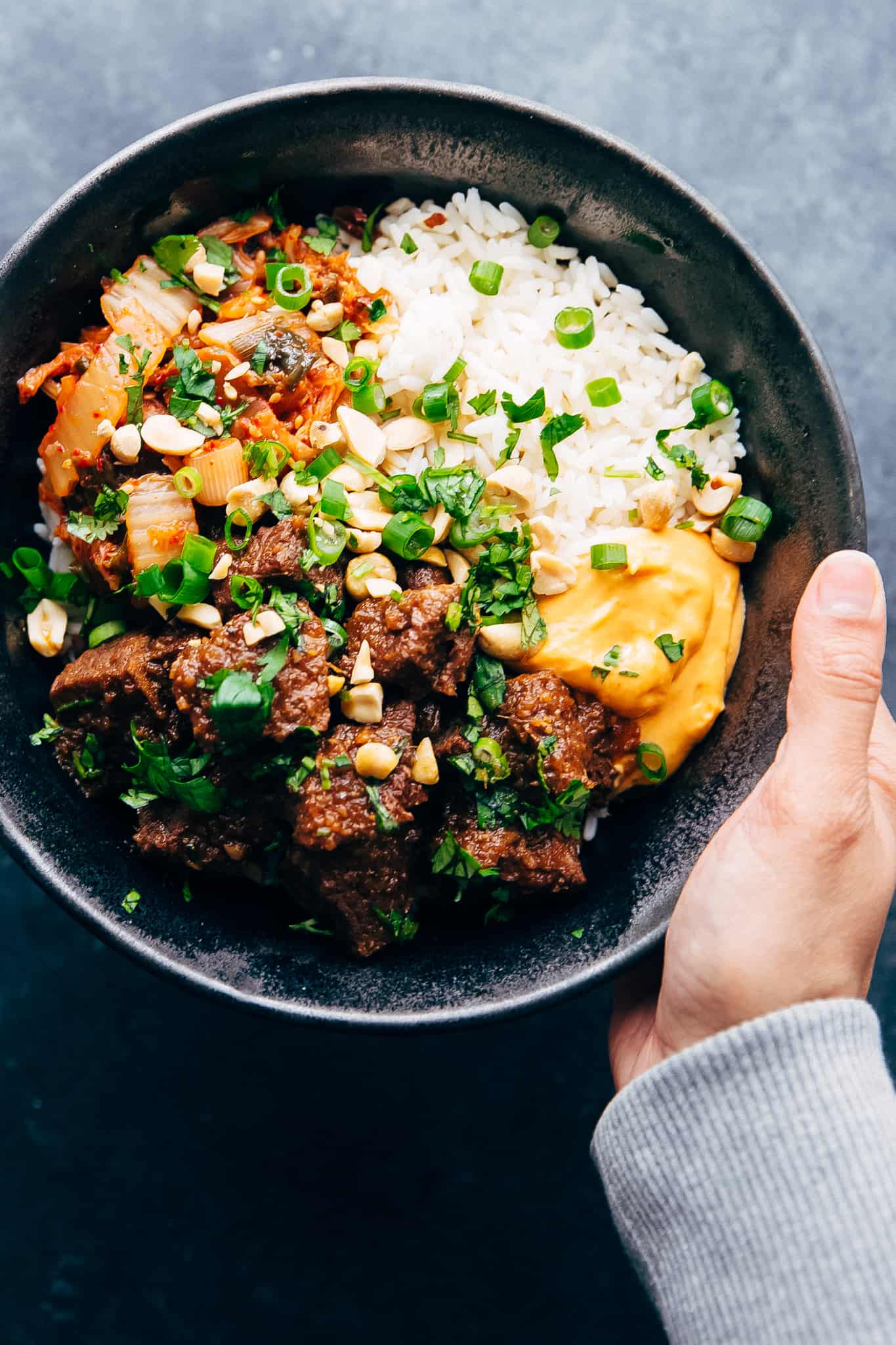 Did we actually really catch your attention when we started talking about this concept of making Korean BBQ beef bowls but you’re also tempted by the slow cooker recipe because you work a lot and you don’t have a whole lot of time each day to dedicate to cooking? In that case, we’re pretty sure Little Spice Jar is about to solve your problem for you! Their tutorial shows you step by simple step how to make delicious but simple Korean beef bowls in your Instapot. 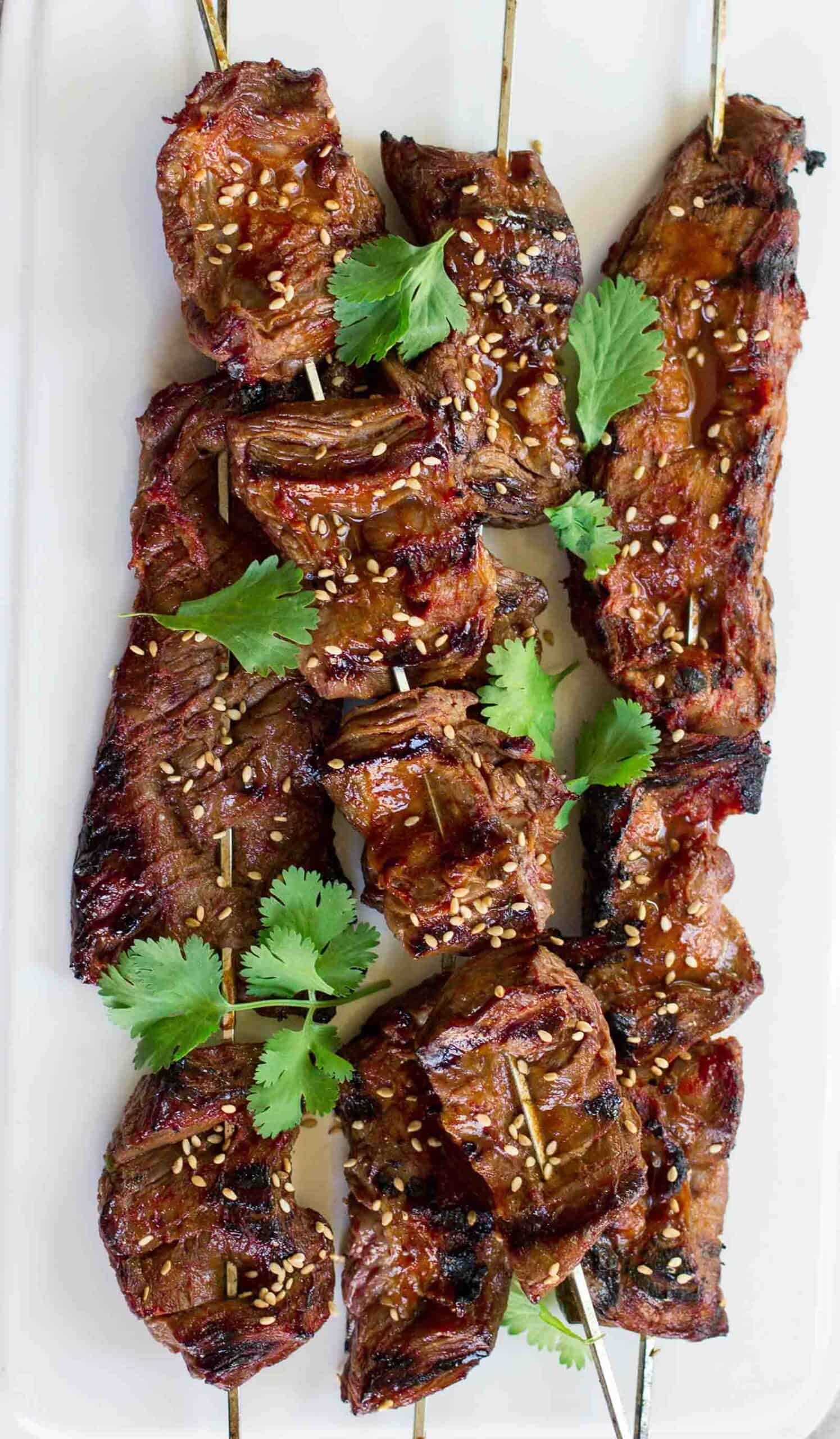 Beef bowls are not, of course, the only way that you can prepare and serve your finished bulgolgi. In fact, despite our love for them and the frequency with which we’ve recently started making them, this next recipe from Simply Recipes might actually be our favourite one we’ve tried so far! Take a better look at their page to see how these Korean BBQ beef skewers were made. 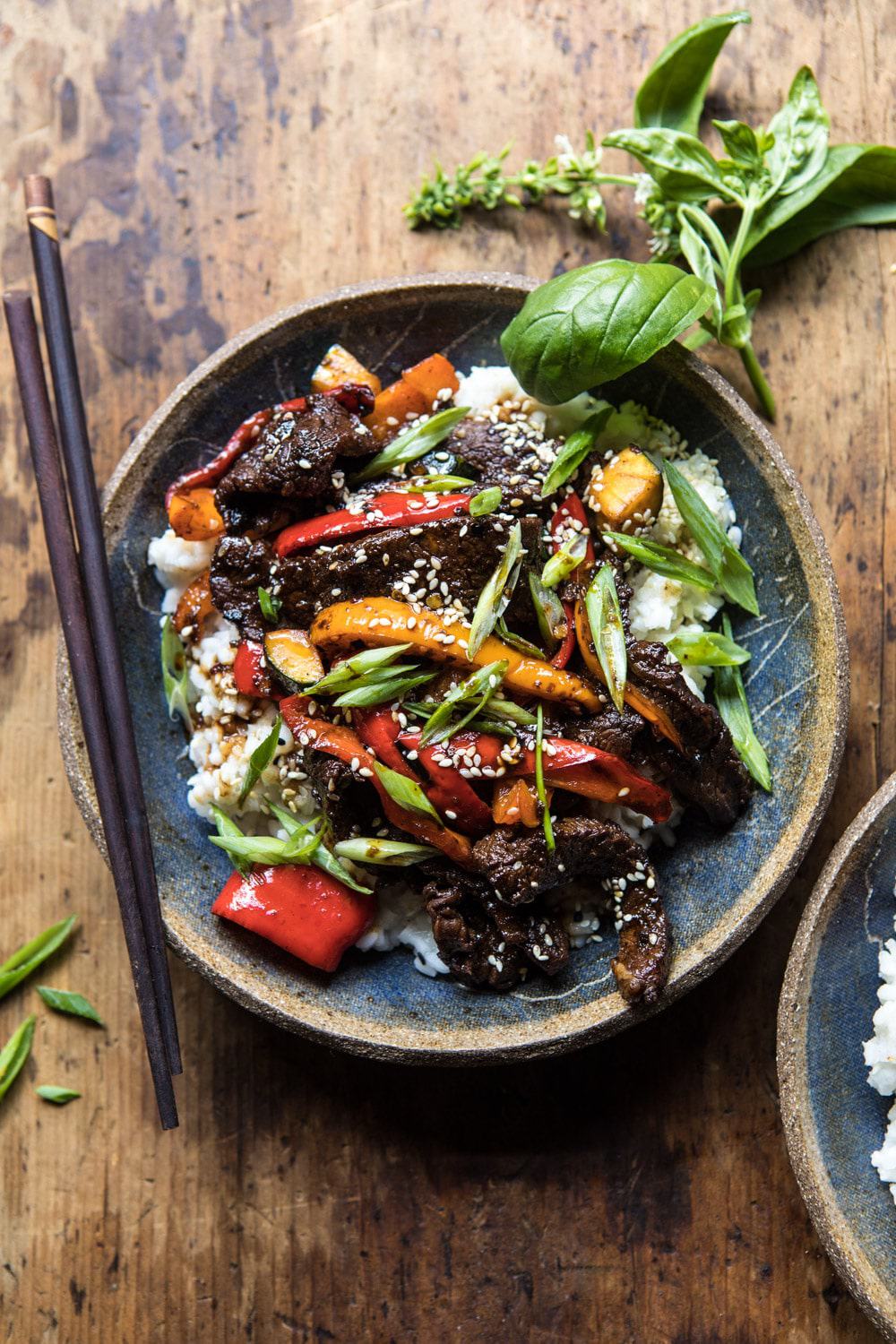 If you’re still feeling totally intrigued by the idea of making a beef and rice dish but you’d like it to be slightly “fancier” than just the average bowl you might order at a walk-up counter, then we’re pretty certain that this next recipe from Halfbaked Harvest might be the one you’ve been holding out for. Their tutorial shows you how nice and surprisingly simply this Korean BBQ beef and peppers dish served over sesame rice can be made. In fact, it legitimately only takes 30 minutes. 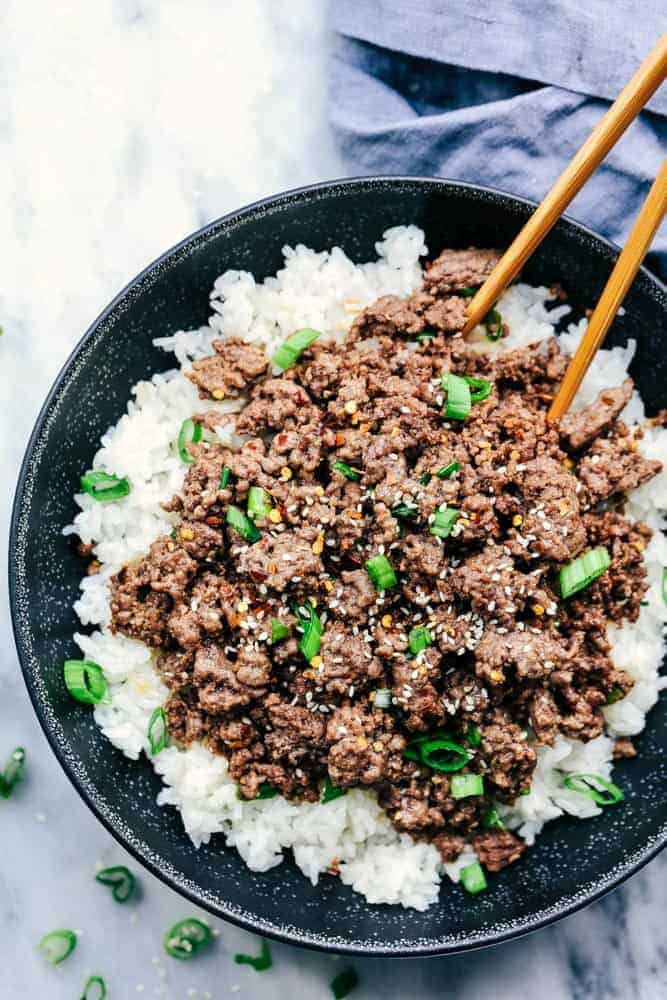 Just in case you’re still interested in finding slight and subtle ways to change the presentation of your Korean BBQ beef up, here’s another awesome alternative for your consideration, this time from The Recipe Critic! Their step by step tutorial, which is very simple to follow, shows you how to make a Korean ground beef rice bowl that still gives you all that BBQ goodness and flavour. 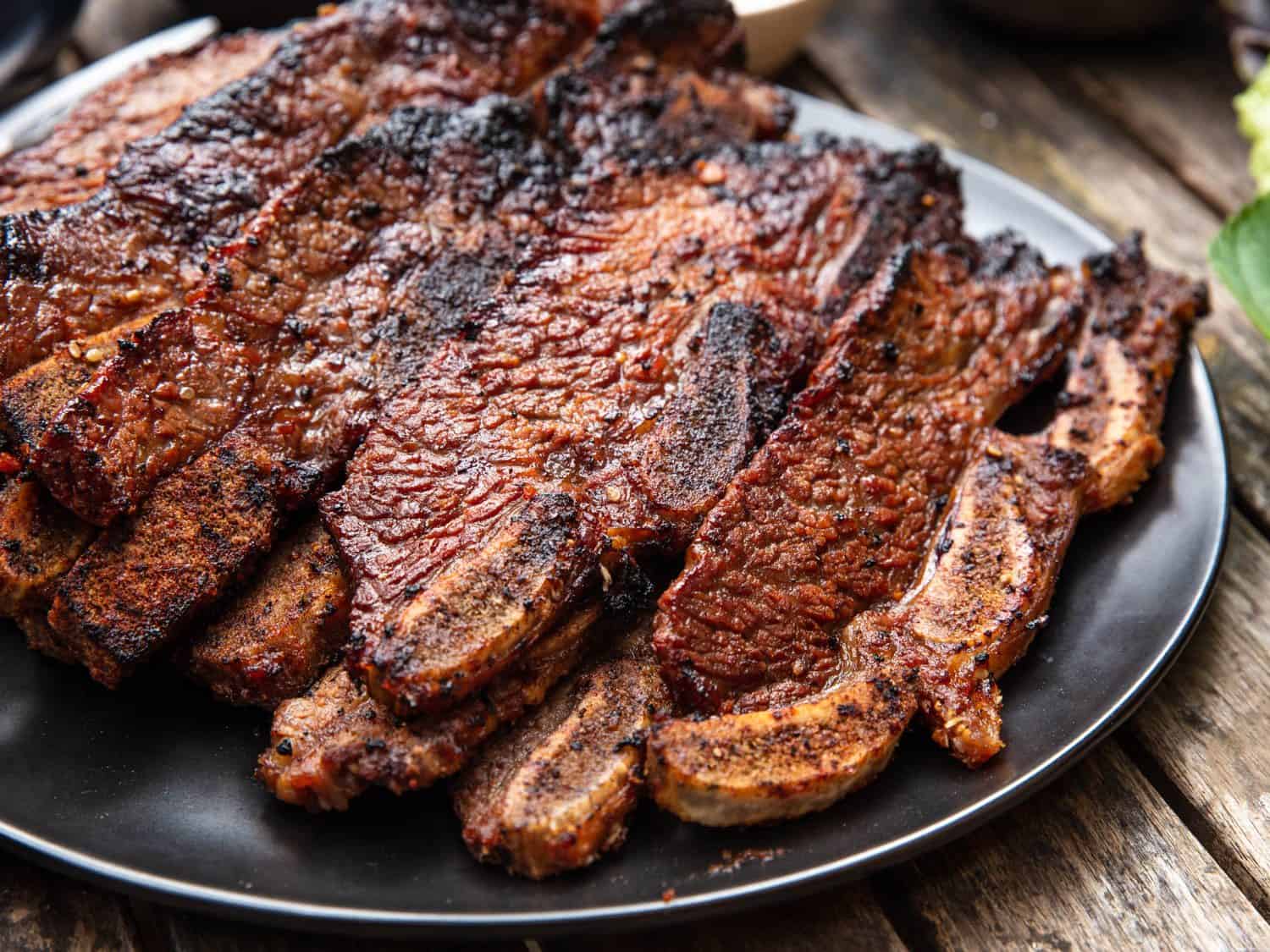 Now that we’ve got you thinking about deliciously meat based Korean meals, are you actually feeling intrigued enough to start looking at similar but slightly alternative options offered along those same lines? Then perhaps you’d be interested in learning how to make galbi! Galbi, or galbi-gui, is actually the Korean word for rib. This recipe from Serious Eats is here to show you how to make grilled beef galbi, Korean BBQ style. 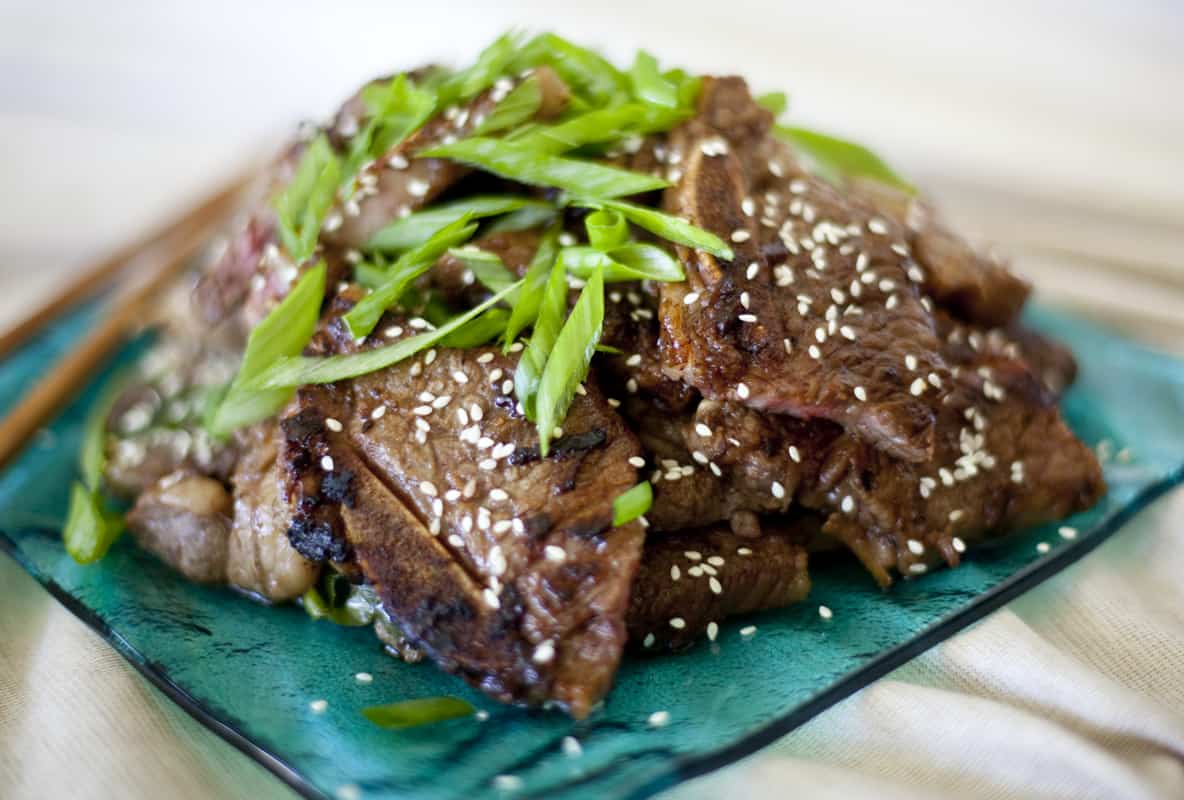 Have you always been the kind of person who prefers to do a lot of research and check out more than one option for the same thing before you make your decision and commit to something? Well, but your cooking style is no exception to that rule then we have a feeling you’ll appreciate seeing another galbi alternative, this time from Eating Richly. Their page will walk you through the process of making Korean beef short ribs! 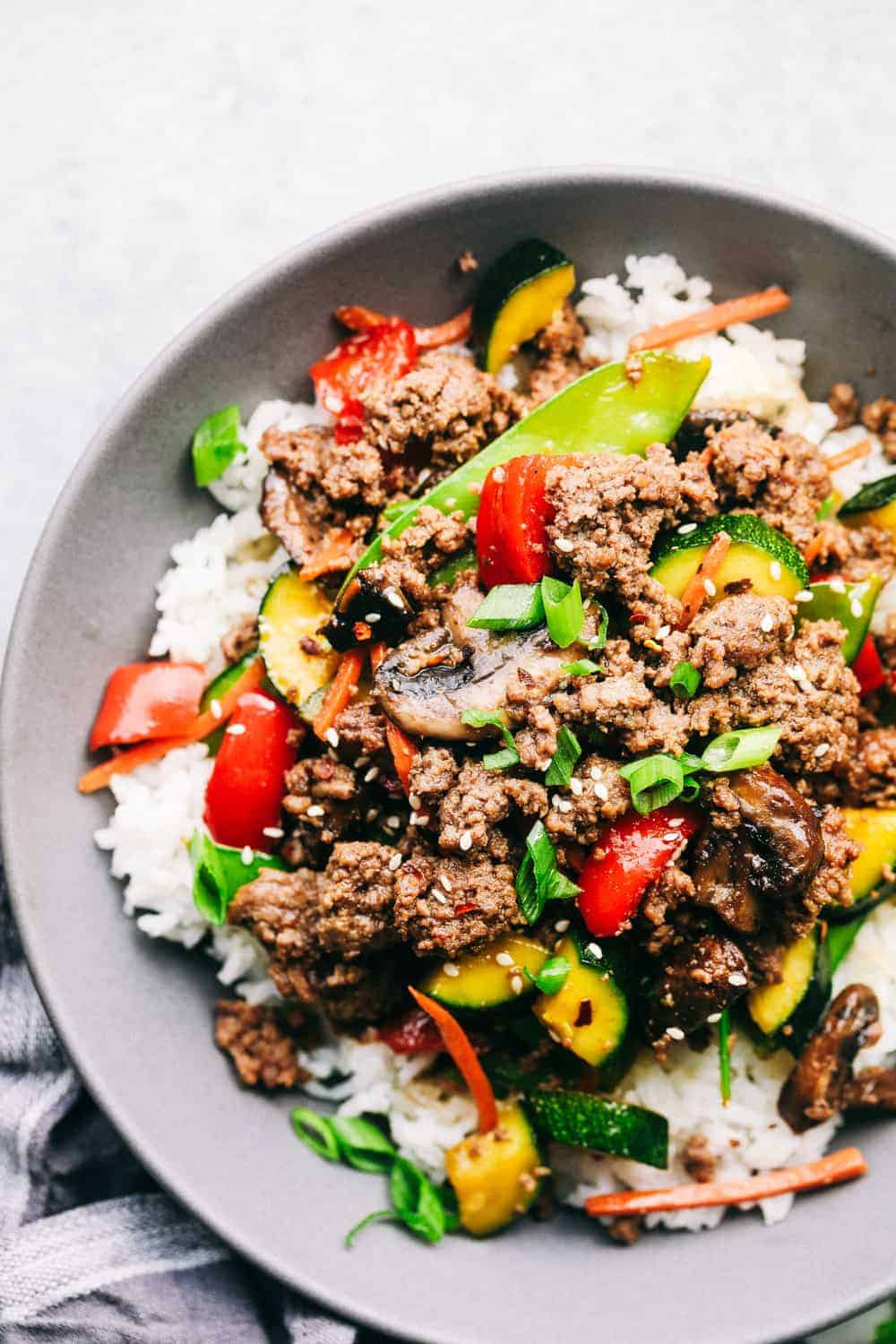 Just in case you’re still thinking about how much you loved the idea of making a version of Korean BBQ beef that uses ground beef, since you happen to have some on hand, but you’d like to see multiple versions of how that can be prepared as well, here’s a great serving suggestion from The Recipe Critic. Their version shows you in simple, clear detail how to turn your Korean BBQ ground beef into a stir fry instead of just a rice bowl! 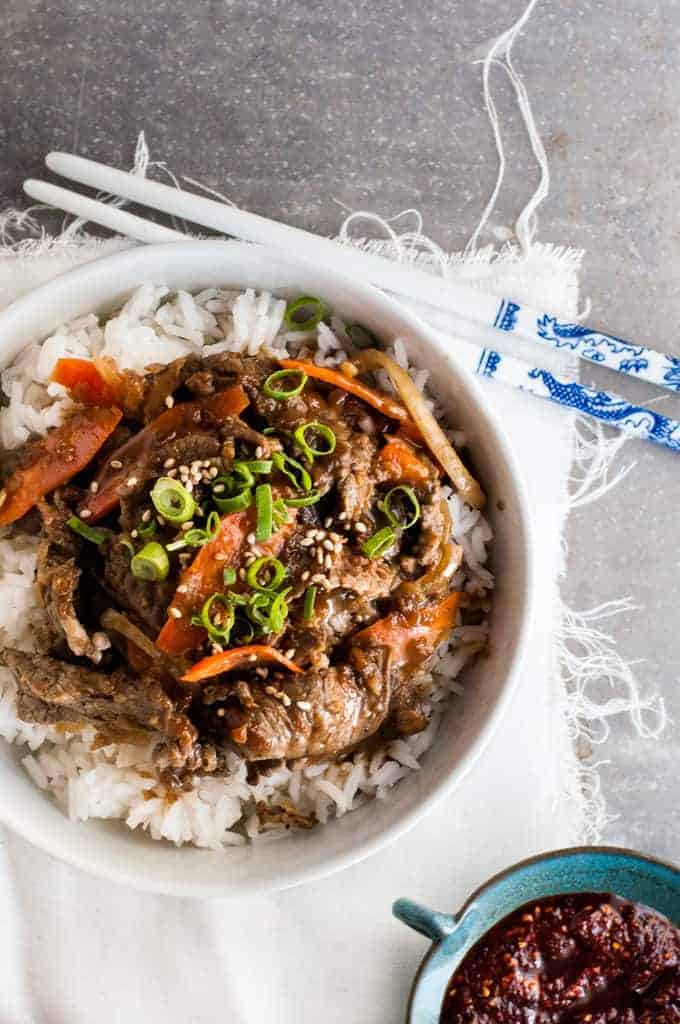 Do you actually have a little bit more experience in the kitchen, or perhaps even with making bulgolgi specifically, and you’re hoping to try your hand at a slightly more careful and homemade version of the Korean BBQ beef rice bowl? Then we think you’ll appreciate the entire experience that comes along with following this authentic homemade Korean beef bowl recipe featured in detail on Recipe Tin Eats. 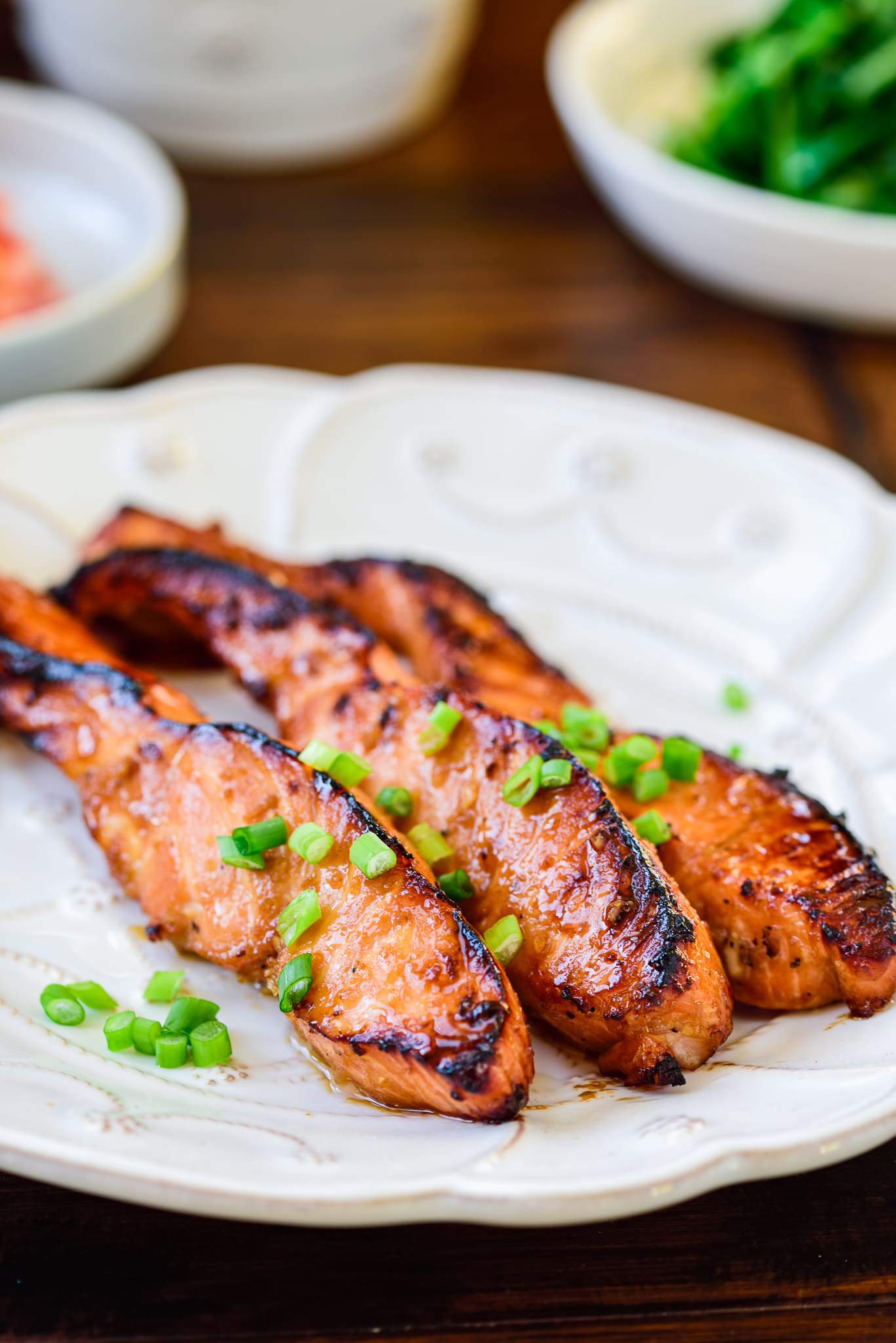 Believe it or not, beef isn’t actually the only kind of meat or protein based food that you can actually prepare in the manner of bulgolgi, even in traditional Korean cooking! There are other kinds of “fire meat” as well, despite the fact that beef and pork are the most commonly served. If you’ve always been more of a seafood lover, check out how Korean Bapsang made this mouthwatering salmon bulgolgi instead! 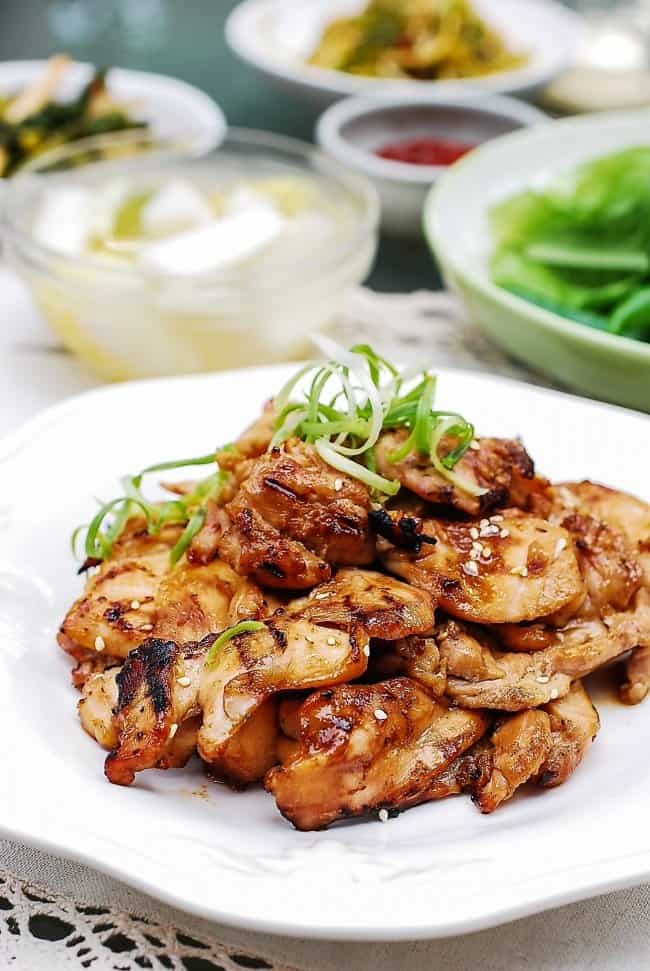 Now, we wouldn’t want to sign off our list and leave you without the final type of easily prepared bulgolgi, especially since it’s made with the type of meat that most people often list as either their favourite or at least their most commonly prepared and consumed. We’re talking about chicken, of course! Just like you can make Korean style BBQ beef, pork, or salmon, you can also make chicken bulgolgi. See how it’s done in more detail on Korean Bapsang.

Do you know another DIY enthusiast and foodie who has been talking about wanting to try their hand at making their own bulgogi but who still feels like they could use some help along the way? Share this post with them so they have all kinds of awesome recipes and options to choose from!