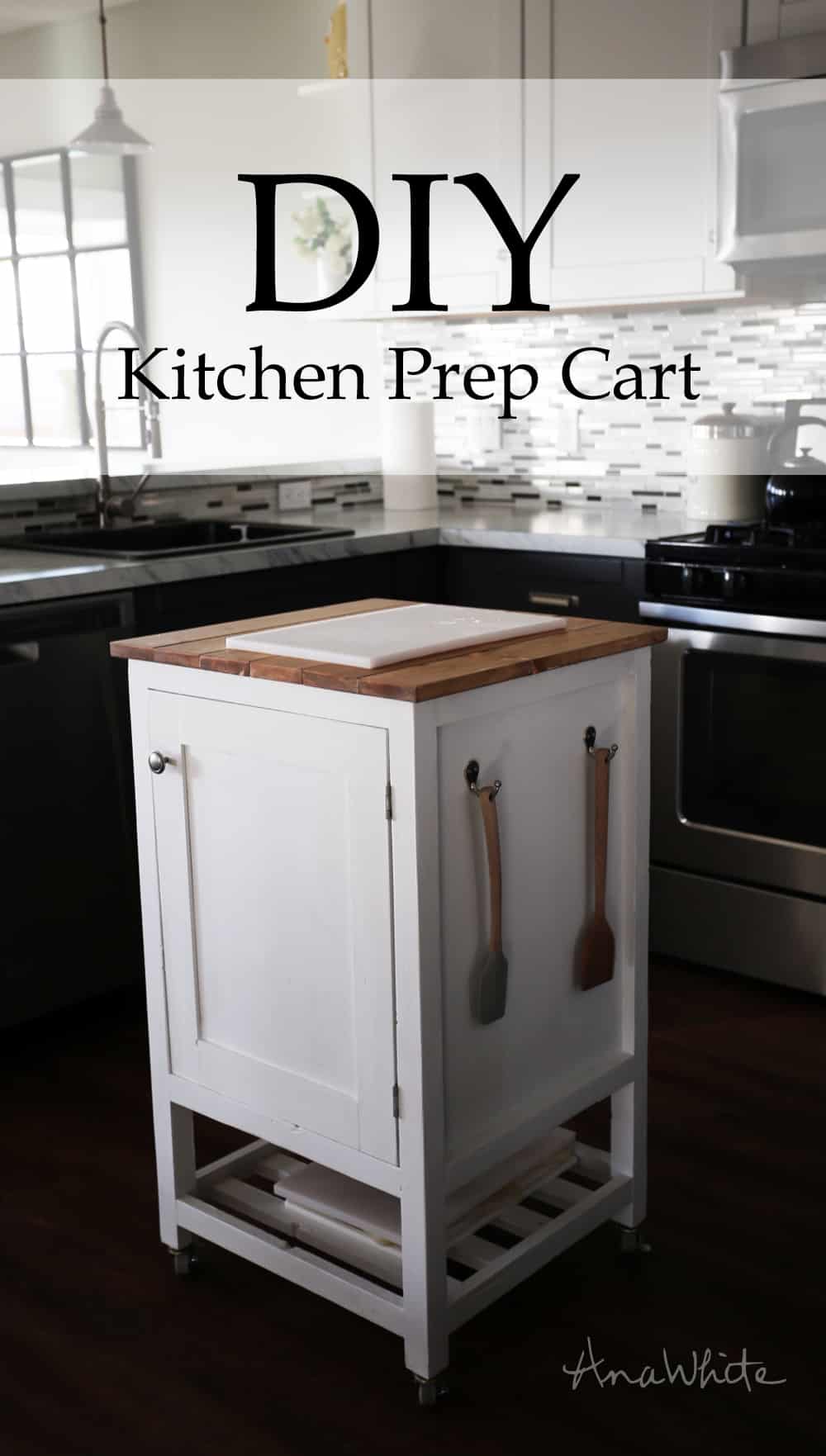 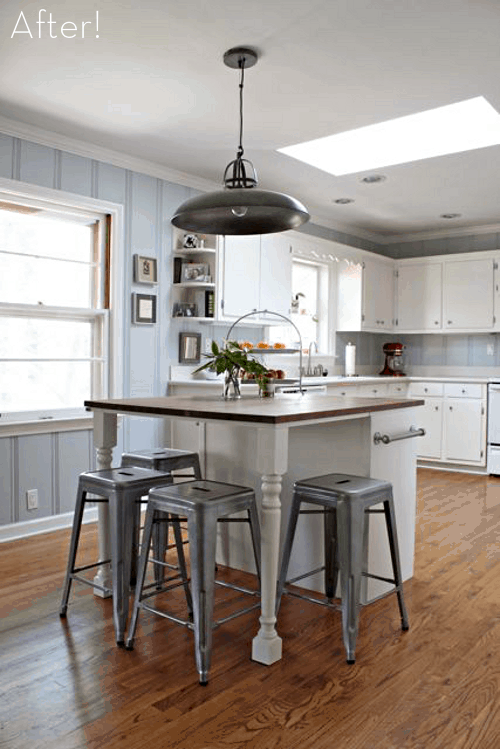 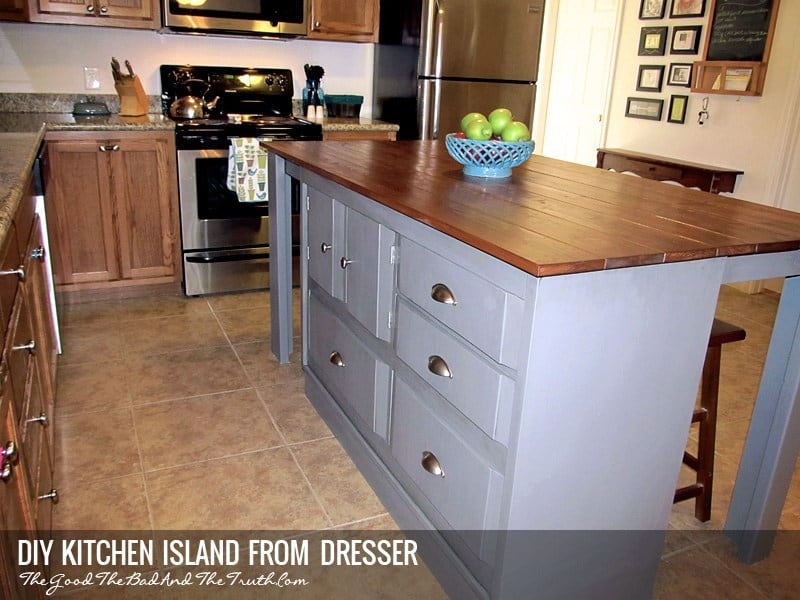 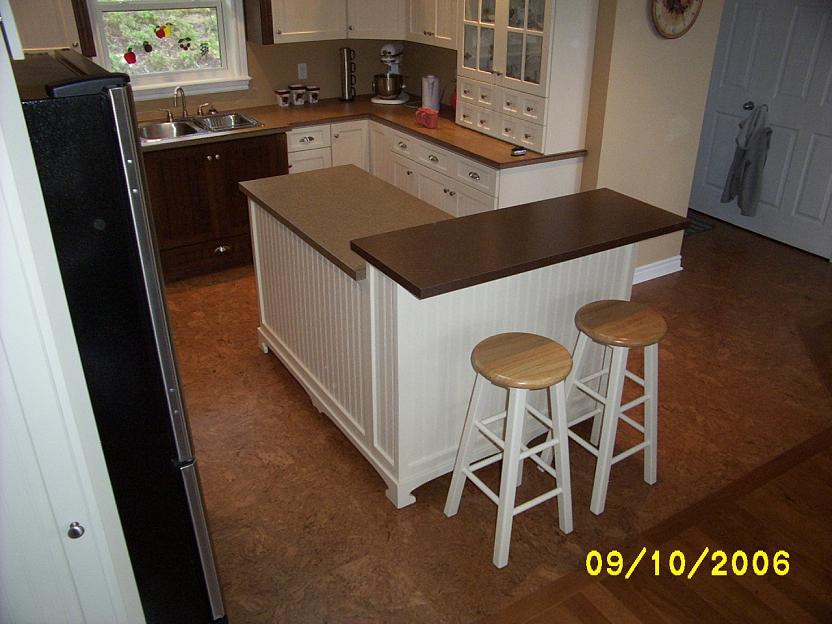 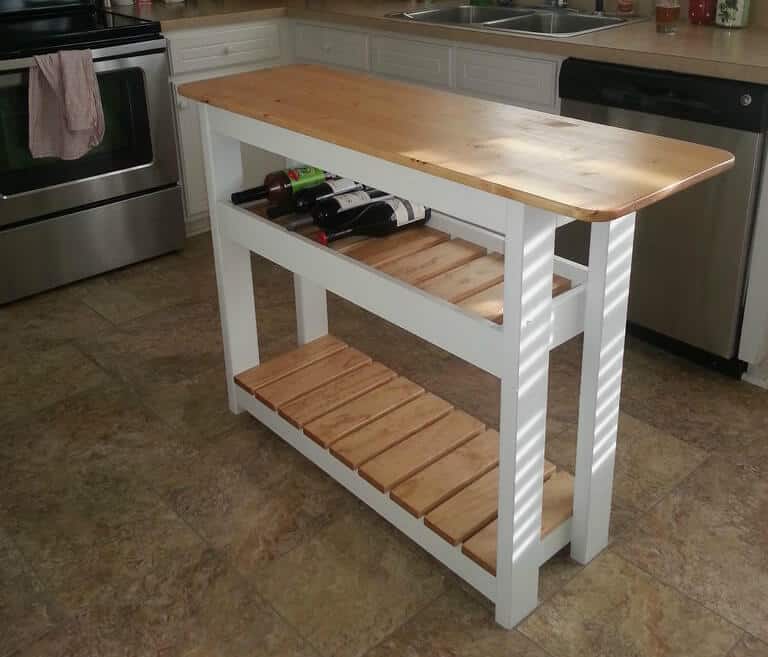 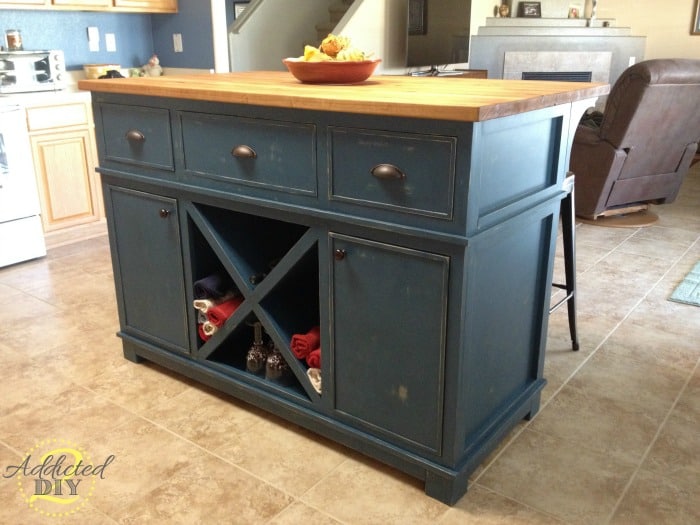 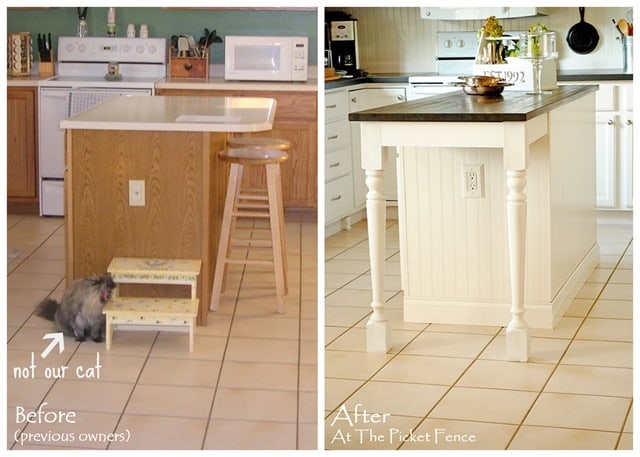 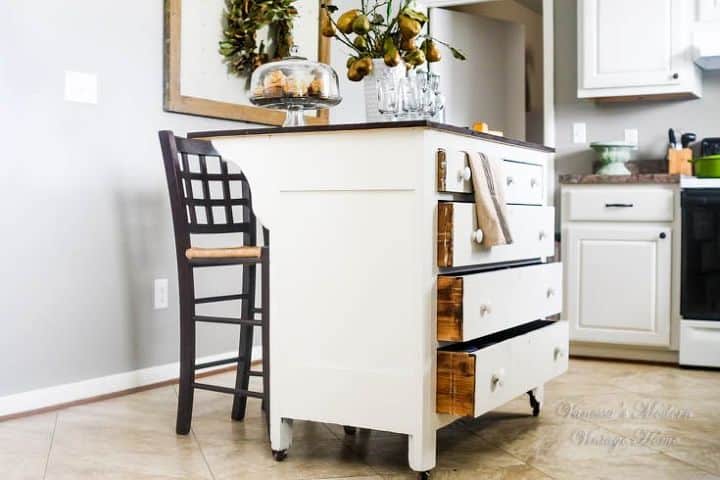 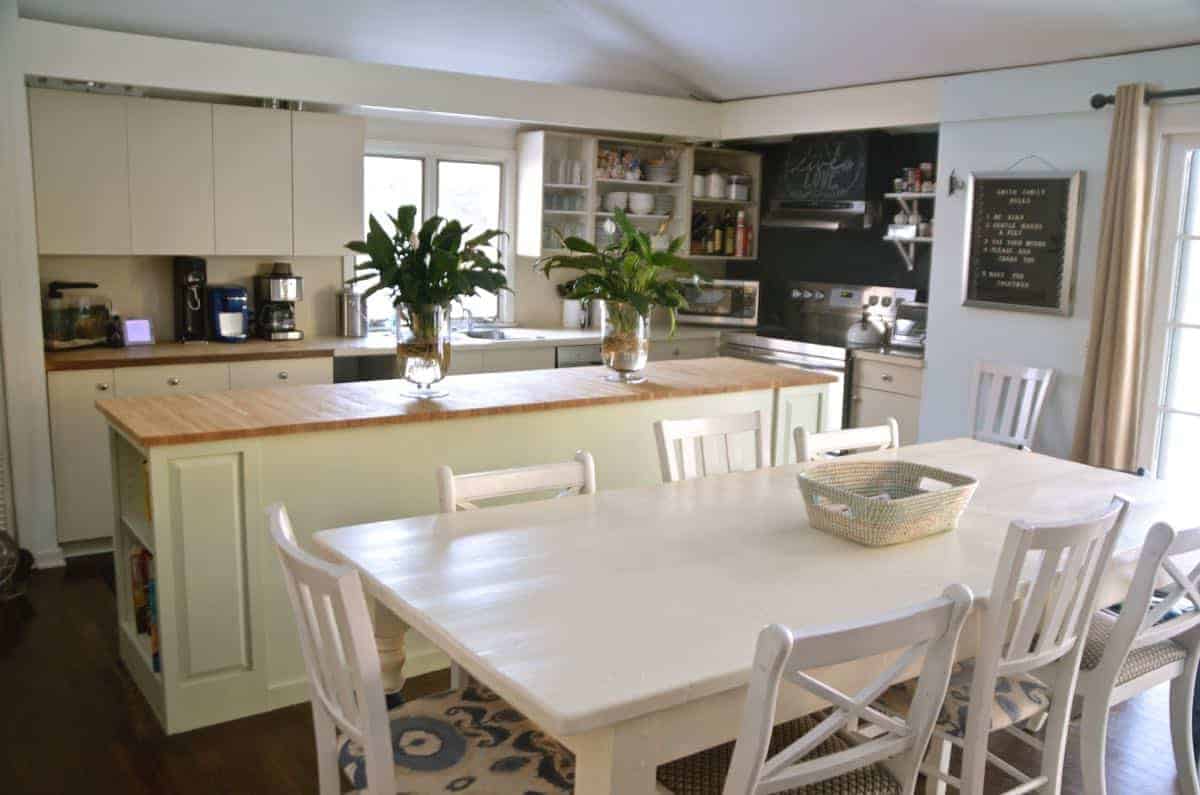 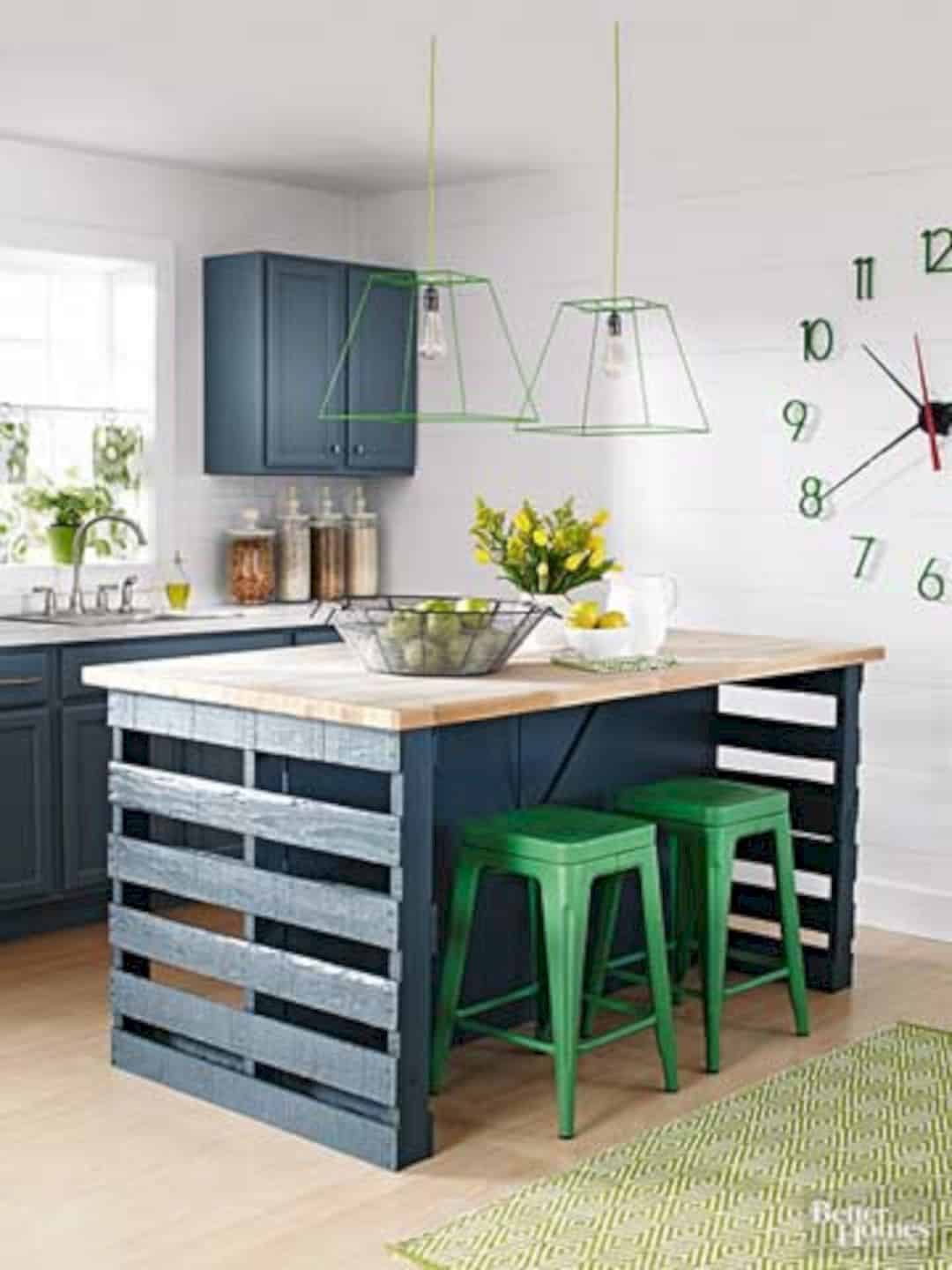 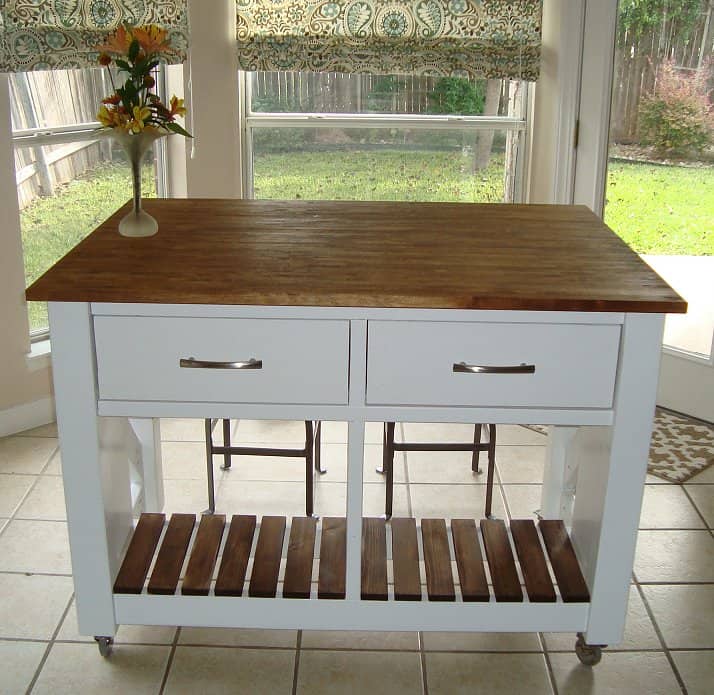 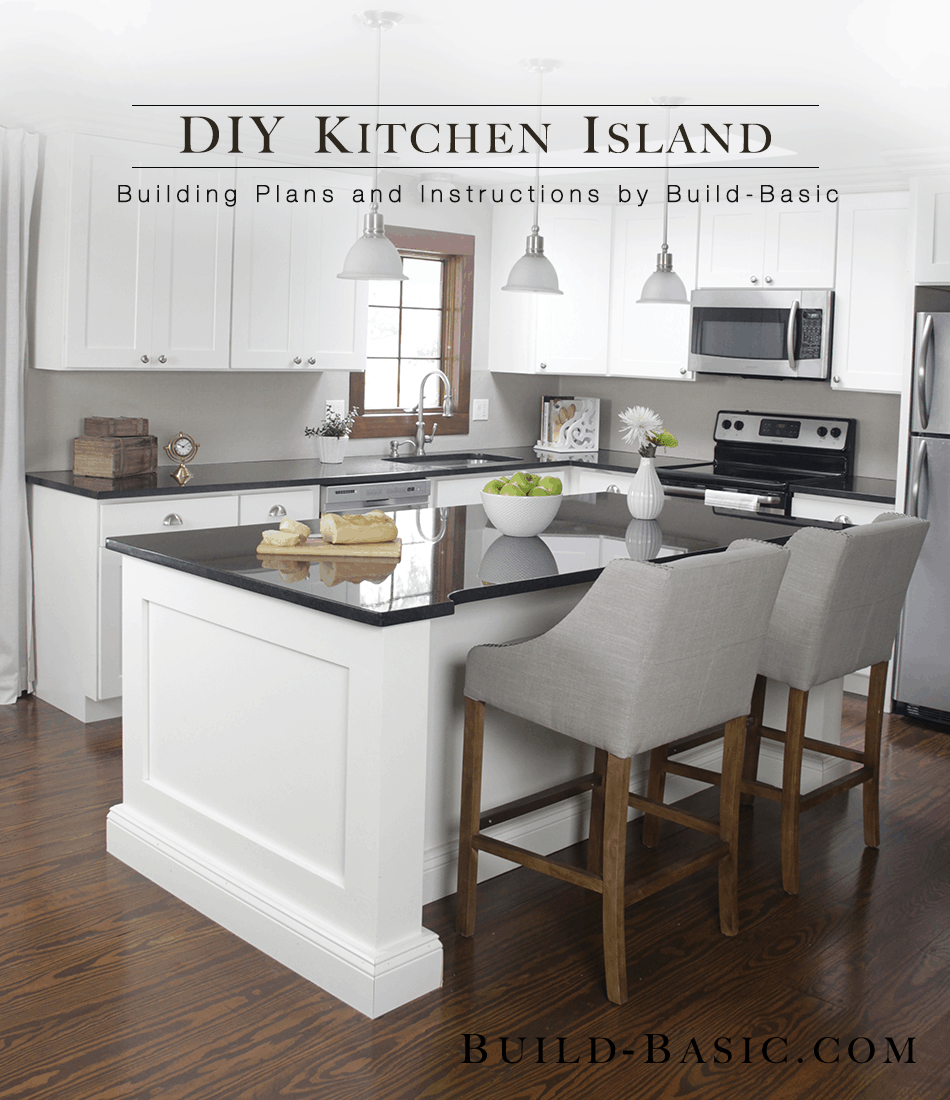 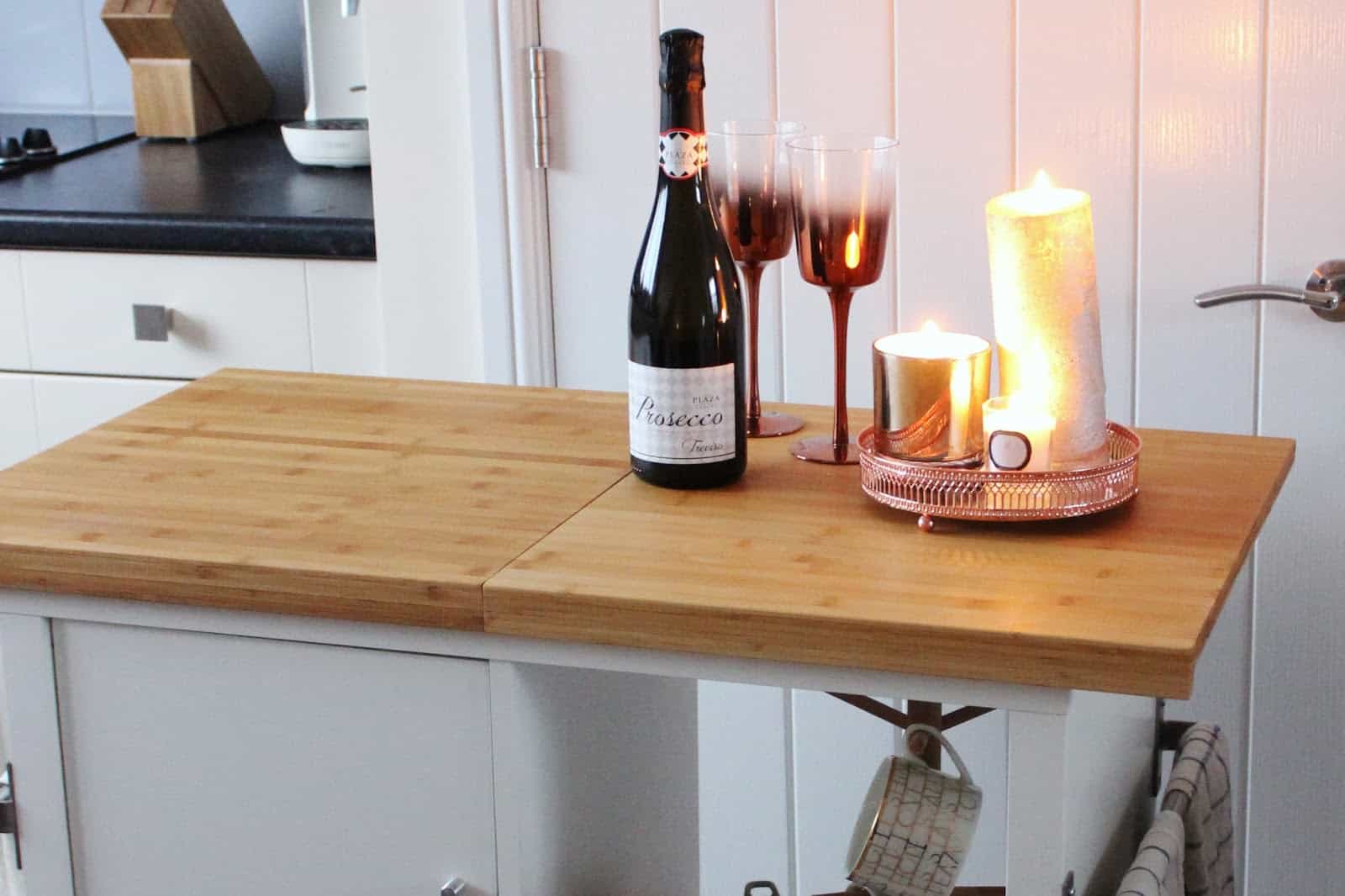 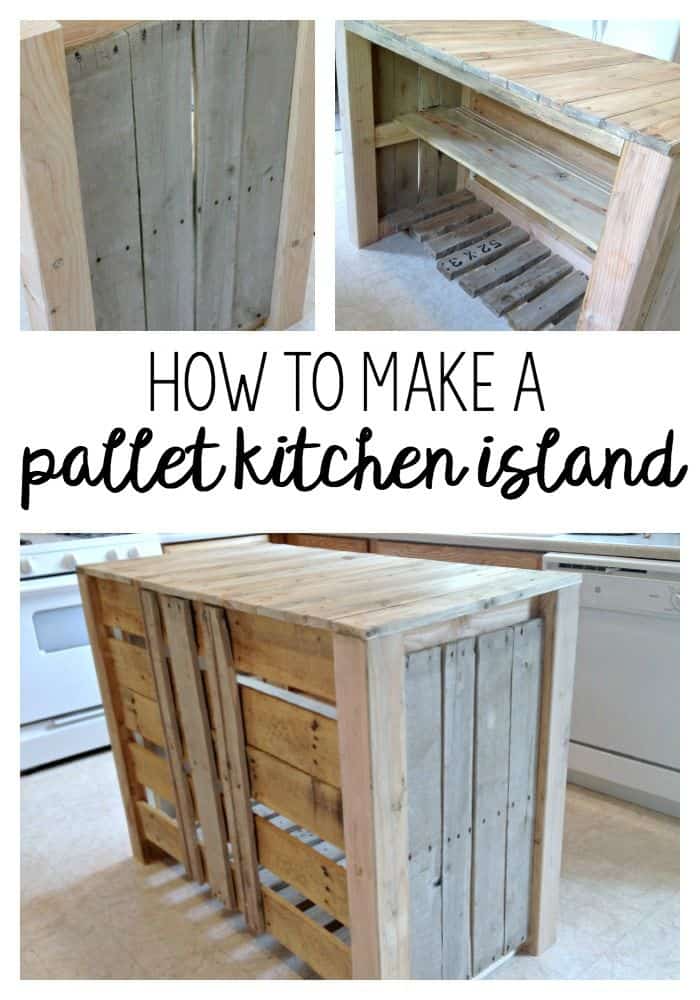 Just because a kitchen doesn’t come with a built-in island when you move in doesn’t mean that you can’t have one, so long as you have the space to spare! We’ve been thinking about this a lot lately because we want to put one into our own kitchen space. We could use the extra countertop and storage and it delineate well between the kitchen and the dining room! Sure, we could but one at a store, but we’re feeling pretty intent on using our DIY skills to make one ourselves. That’s why we’ve had our eyes peeled for as many helpful tips and resources for making a homemade kitchen island as we can possibly find!

Are you the kind of DIY and decor enthusiast who believes that an upcycled wooden pallet is one of the best things you can possibly use during a home project? In that case, we have a feeling you’re going to get along very well indeed with the way Nothing Grace guides you step by step through the process of making your very own kitchen island out of the pallets you like so much, complete with some shelving and space for stools.

Are you actually a little bit newer to the handy skills game when it comes to DIY, since you’re more of a crafter, but you’re determined to give your kitchen island a try? Then maybe you’d do better to make something like this IKEA shelf hack island from Jen Lou Meredith! they start with a prefabricated piece that will give you something to work from and then show you how to change and customize the original in simple ways so the finished product is an island and not a shelf.

3. Building plans and instructions for a basic rectangular kitchen island

Are you actually quite handy indeed because you’re very adept at following instructions but you’re just not quite so experience in designing your own pieces and pulling them off without some kind of plan for guidance? In that case, we think you’re really  going to appreciate the way Build Basic was kind enough to offer up precisely what you need to help you make a standard, lovely kitchen island of your very own, for free! Their instructions are wonderfully clear, too, which we value.

Are you absolutely interested in making a wooden, farm style kitchen island but you’re not necessarily intent on creating it from pallet wood or having it look quite as rustic as the piece you saw before? In that case, we’d definitely suggest taking a look at how Ana White made this fantastic X-frame island on wheels that’s actually simpler to complete than it looks. It even has drawers for extra storage and space for two high stools.

Maybe you actually are feeling very intent on making your pallet wood kitchen island, but you’d like it to be even bigger and more explicitly reclaimed looking than the one we showed you earlier on our list? In that case, we have a feeling you might prefer the way BHG created this double wide mode that actually uses a whole pallet on each end! We love the idea of painting most of the island while leaving the wood natural on top.

6. Free plans for an island with drawers and cupboards

Were you very intrigued indeed by the concept of following along with free plans but still being able to make the entire kitchen island yourself, with materials of your own choosing, even though the first set of plans we showed you wasn’t quite right for you? Then here’s a fantastic alternative set for your consideration! We love the way Cherished Bliss outlines how to make a kitchen island that’s slightly smaller but actually has a little more shelving and drawer space than the one you saw before.

Are you quite enjoying the idea of taking a pre-existing piece of furniture and turning it into a kitchen island, but you’d rather work with something that’s already built than the pieces of an IKEA shelf? Well, particularly if you’re very into vintage looking pieces from decades past, we have a feeling you might get along a little better with something like this thrift shop cabinet turned kitchen island project outlined step by step on Charlotte’s House!

Just in case you’re still intrigued by the idea of making another furniture piece into a kitchen island but you can’t find a shelf or a cabinet that you’ve really liked the look of, here’s another concept for your consideration! Take a look at Hometalk to see how they added a little extension onto the back of an old dresser to make a seating space and filled the drawers with kitchen wares. We love that they even added little wheels so that you can actually move the island if you need to!

Perhaps you actually already have a kitchen island and the problem is, rather, that you’d prefer it was set up a different way or had a little more countertop space for you to work with? Then maybe you’d get along a little better following a tutorial for putting an extension on your island, rather than one that shows you how to make the whole thing from scratch! That’s what At The Picket Fence did here in order to create a better space for sitting at and, honestly, we’re huge fans.

Are you still feeling quite interested in the techniques we showed you for turning cabinets into kitchen islands but you’ve held off on choosing a design so far because you’d prefer something that has a unique feature rather than just more cupboards? Well, if you’re any kind of whine enthusiast, we think you might get a kick out of the way Addicted 2 DIY turned one of the centre cupboards in their cabinet turned kitchen island into an X shelf that’s perfect for using as a wine rack! Of course, there are plenty of other things you can put there too.

Speaking of kitchen islands with wine racks, here’s another design along those lines, just in case you’d like something a little different than what you saw above! We love the way Home Stratosphere made this version that’s a little thinner and more space efficient, like a simple extra countertop, but that also has shelves with slats that will hold wine bottles sturdily in between them so you always have a new bottle on hand to enjoy with dinner.

Were you rather interested indeed in the idea of having a kitchen island that has it’s own extension for seating that’s a little bit set aside from everything else you might use it for, but you’d rather build that part in from scratch rather than adding it on like an extension later? In that case, we’d absolutely suggest taking a look at the way Woodchuck Canuck made this fantastic two-tiered kitchen island that has a second raised part placed even better for stools than most of the designs you’ve seen so far!

Have you actually seen quite a number of island layouts and customization ideas that you felt pretty interested in but you haven’t been able to make yourself choose between them yet? In that case, maybe you’d prefer this tutorial from Tasha Wiginton that blends a few of the ideas you’ve seen so far into one place, like the dresser to island transformation or the extensions for seating and more counter space!

By now, you’ve seen quite a number of kitchen island extension tutorials, but what if you haven’t found the one that quite suits the aesthetic of the rest of your kitchen? Then perhaps you’d get along better with this version from The Nesting Game that shows you how to make it happen quite simply by using pieces of an old dining table! We love that you can see this pretty clearly in the legs.

Perhaps your kitchen doesn’t really have the space for a full permanent kitchen island that will sit in the same spot all the time but you’re still convinced that you need a little extra countertop room at least sometimes because you’re an avid cook who’s always making and preparing things? Then we have a feeling you’re going to love the way Ana White made this fantastic DIY . prep card that’s a little smaller and on wheels! It’s like a singular cupboard or a mini island that you can move around as you please and we think it’s a very useful idea indeed.

Do you know a fellow home crafter and DIY enthusiast who loves adding homemade furniture pieces to their main rooms and wants to make a kitchen island of their own, but who could definitely use a hand along the way? Share this post with them so they have all kinds of guidance and inspiration!

How to Rework Your Kitchen with Butcher Block Countertops

60 Christmas Lawn Decorations to Light Up Your Yard