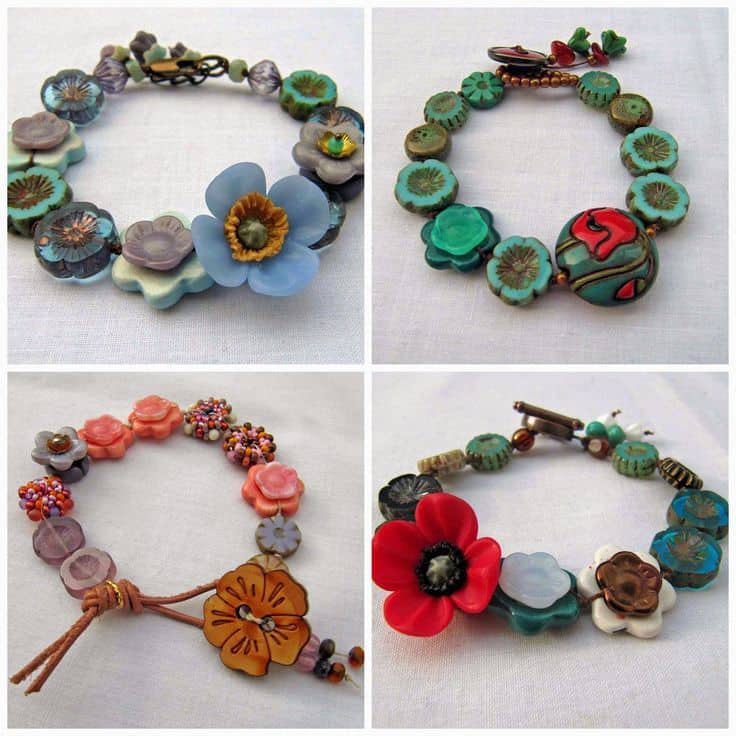 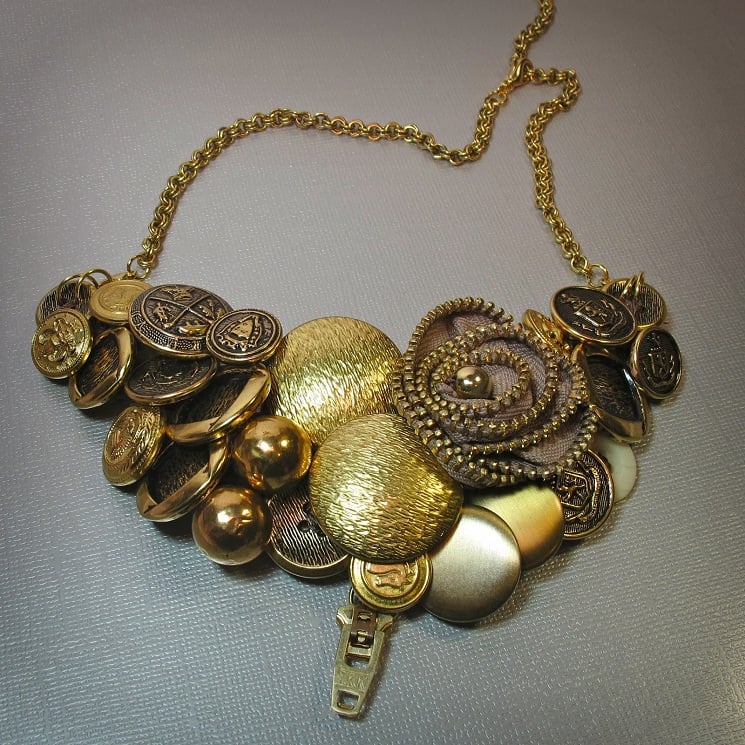 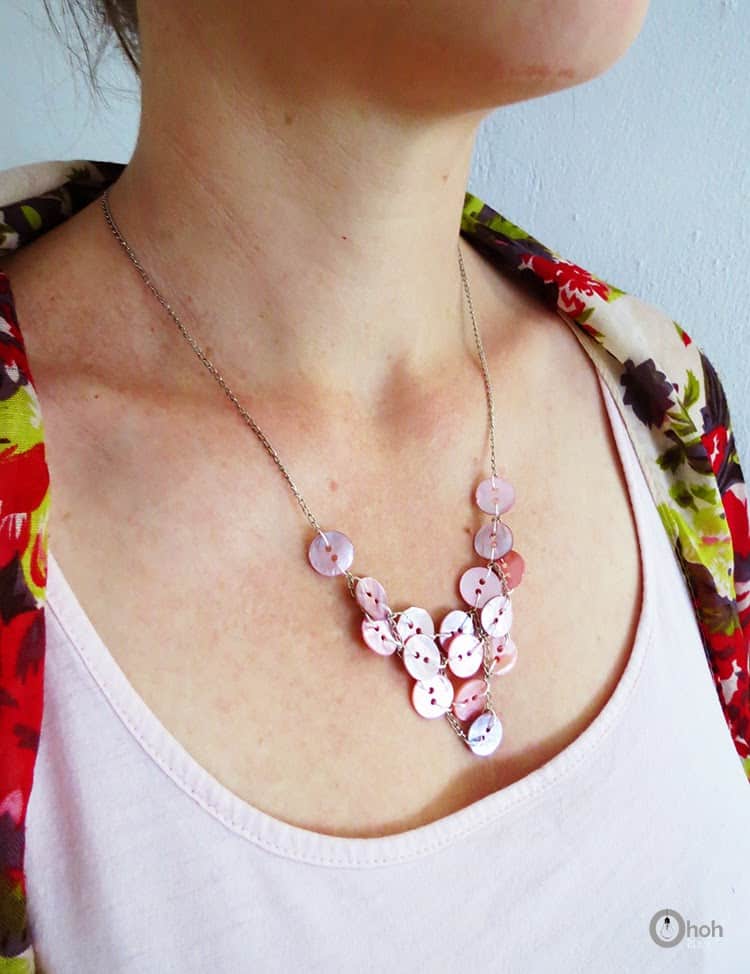 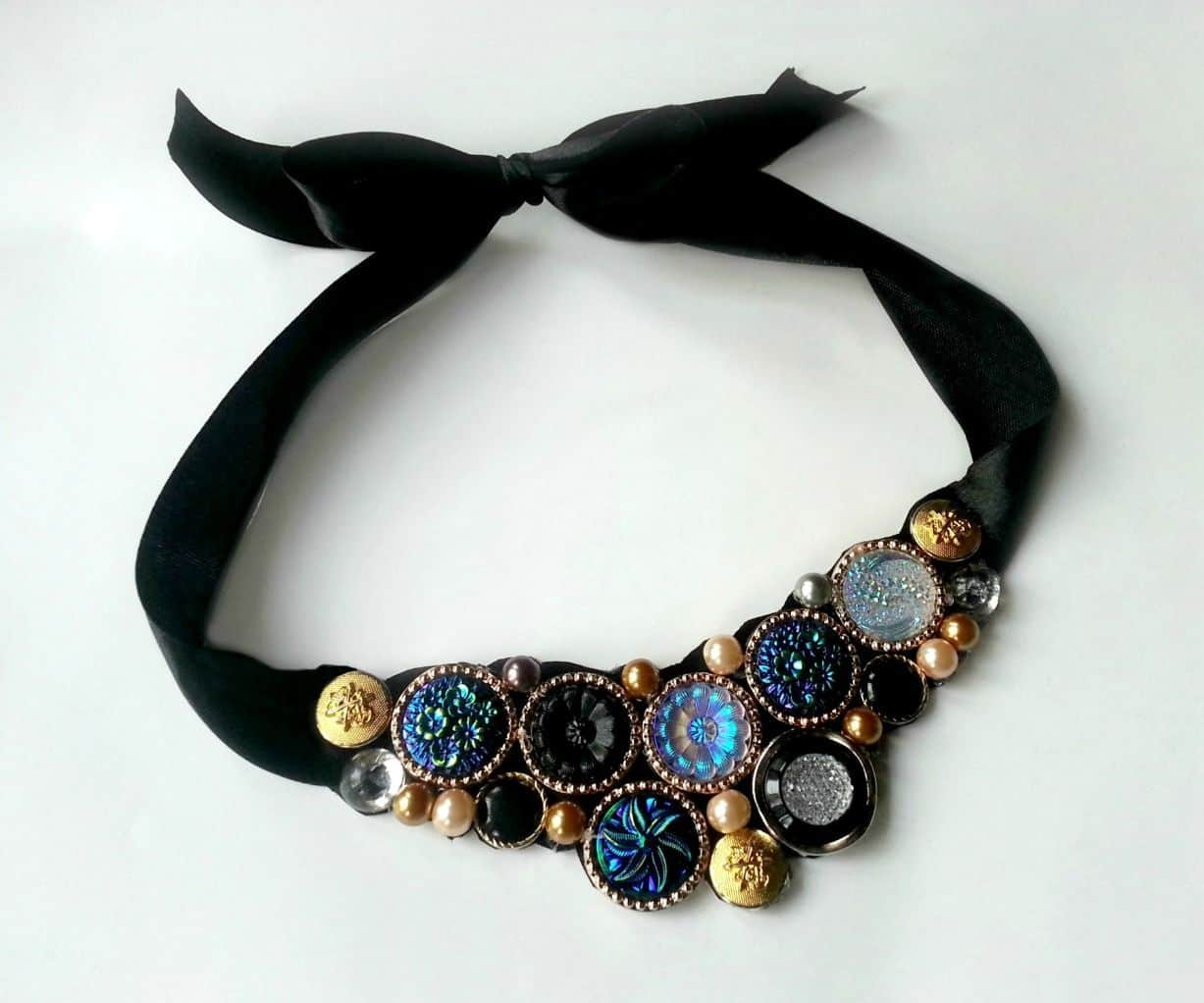 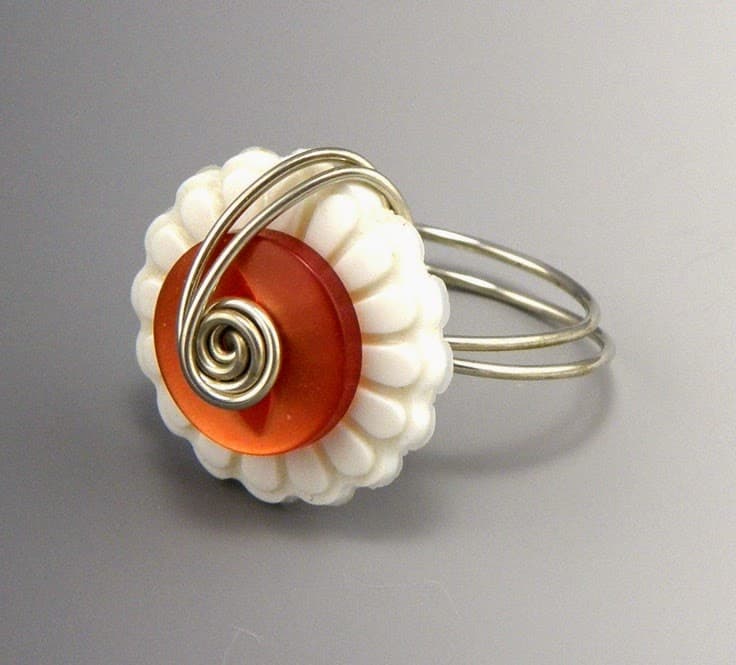 Because we’re such avid crafters, we’ve spent years collecting buttons. It’s not so much that we went out and intentionally bought buttons on purpose or anything. Buttons have sort of just fallen into our laps over the years! Whether we’re finding them in our washing machine, setting them aside when they fall off our clothing then forgetting to reattach them, or stashing the extra buttons that come attached to the labels of new clothing but that we rarely ever need, we’ve amassed quite a collection. Once you’ve got that many buttons, though, what do you actually do with them? Well, if you’re a mending, sewing, or knitting enthusiast, you might keep them for clothing, but otherwise we really enjoy crafting with our spare buttons! We’ve turned them into all kinds of things over the years, but we’re pretty sure out favourite DIY button project has always been jewelry.

Just in case you’re as interested in the idea of jewelry made from buttons as we are, if not more, here are 15 of the nicest DIY tutorials, designs, and ideas that we’ve encountered in our search for inspiration so far!

Have you ever come across old buttons made of soft metals that have some really cool inscriptions and designs on them but that you don’t have any matches for, so you’re just not sure you’ll ever use them anywhere else? We had plenty just like that and we actually used them to make this very charm bracelet featured on Sadie Seasongoods. It just looked so cool, like something you might find digging up an ancient Viking village! They show you how to flatten your old metal buttons with a hammer so they look like coins and then turn them into charms.

Perhaps you have a whole collection of vintage buttons like we were talking about before but some of the are so nice that you’re just not sure you want to be smashing them flat? We can certainly understand that, especially for the ones with lovely designs inscribed across their surface. In that case, perhaps you’d prefer this awesome chunky bib necklace design outlined by Blue Kat Kraft! They show you how to use the rubber kind of grid mat you’d put at the bottom of a kitchen drawer or under a mat as a base for the bib, sewing the buttons on in the crescent shape you want the finished product to be. Attach the chain and clasps and voila!

Are you quite interested in the idea of making a bib necklace but you’re just not sure that you want to sew anything to the rubber we mentioned above because sometimes you have weird skin reactions to runners and you’d rather not risk it? Then perhaps you’d prefer this version of a bib necklace that’s a little more old fashioned looking all round! We love the way this tutorial on Instructables used a series of old buttons combined with vintage coloured pearl beads to decorate a ribbon. This project will look grand and beautiful whether you use a silk ribbon or a velvet one!

Perhaps the buttons you have are mostly smaller and a little more mismatched, rather than being these stately collections of older statement buttons featuring all kinds of gold and sparkle? Well, your buttons absolutely still have a ton of crafting potential with just as many options! We’ve actually made this woven button clusters necklace outlined on Button Jewelry before and we loved it so much that we still wear it. Creating the clusters was extra fun because there were countless ways for us to combine the different sizes and colours of buttons all the way around.

Do you have some bright plastic buttons that have caught the eyes of your kids and now they want to get in on the button jewelry making game too? In that case, we think perhaps we’ve found the perfect project for you! These adorable glued button rings featured on Craft Klatch are simple enough to make that your kids can absolutely help out with them or even make them all by themselves. We adore the bright little flower and the decreasing colour combo, but you can feasibly create any pattern your kids can think up as long as the shape will hold with your glue!

Were you intrigued by creating a smaller button necklace but you’re not sure the previous clustered design we showed you is quite the right style for you because all of your buttons are the same colour and size, so you won’t get that same eclectic effect? Similarly, smaller buttons are harder to make bib style necklaces out of because you need so many more of them to fill the space. That’s why we enjoyed this smaller chain bib alternative so much! You still get that central focal point made of buttons but rather than being glued or sewn onto a base, they’re linked together like part of the chain for a more delicate look. Find out how it’s done in more detail on Oh Oh Blog.

When we think of jewelry pieces made from buttons, part of our mind always wanders to the big, costume-y brooches our grandmas used to wear. Some of them were purchased, but many of them were homemade from beads, buttons, rhinestones, and pieces of other jewelry that had broken and been repurposed. The best part was that the homemade ones were always so cute that we could hardly ever tell them apart from the ones that were store bought. That’s why, now that we’re older and more skilled in crafting, we love making button brooches of our very own! just in case you need a bit of a guide or some helpful tips, here’s a great design and tutorial for rhinestoned button brooches featured on Catherine Cole.

By this point on the list, we’re sure you can absolutely recognize how fantastic homemade button jewelry can look, but what if you’d rather make a piece that involves a little something extra for contrast? Then we think you’ll really appreciate the way Guide Patterns combined their buttons with zippers and zipper pulls for a whole closures theme! We adore this project in its entirety, but we’re completely obsessed with the way they curled the zipper around itself and pinned it with a bead in the middle to look like a flower. We find that the finished product looks a little bit steam punk inspired.

Do you have some very decorative buttons that you never put onto clothing because you through they deserved a prettier showcase, and perhaps even a few beads that go well with the buttons themselves? Well, grab some leather cord and you’ll have just about everything you need to transform those buttons and beads into a pretty bracelet just like these ones! We love the floral themes they have going on here and we have actually mimicked these very designs in real life because we had a small collection of leaf and flower shaped buttons, but you could make a similarly styled bracelet with any buttons you please. Check out how Buttons Galore & More used their biggest statement button as the closing clasp that their loop sits around when you wear it!

Perhaps you actually only have a series of small, rather plan wooden buttons that you’d like to create something with, but you kind of enjoy their simplicity and don’t want to make it too fancy? In that case, we’d suggest grabbing some colourful jewelry cord and making something along the lines of these adorably single button bracelets outlined on All Things Target! We like this project because it works if you have only one button but it also works to make really cute friendship bracelets if you have a few matching ones.

Whether we’re working with buttons or not, we actually make jewelry quite often. One of our favourite techniques to use, however, is usually wire bending! There are just about countless ways to create rings of this kind but did you know that you can actually combine wire bending with button jewelry in really creative ways? We’re totally enamoured with the way Ickynick’s layered two buttons on top of each other and set them with spiralled jewelry wire, extending that underneath into a pretty double wrapped ring shape.

If you’re going to get into the world of wire bending, would you rather create a pair of dangly earrings, since an earring hook is such an easy shape to make? Well, that’s a simple enough task in itself, but have you ever tried looping jewelry wire through holes as small as the ones in buttons? We think you’ll be pleased to learn that that’s actually quite simple to do, especially if you have a pair of matching buttons pretty enough that you don’t mind sticking to one for each ear. Even though it’s an easy idea, here’s a tutorial on Cut Out and Keep to keep you on track.

Perhaps your button collection is so big that you’ve actually been hoping to find a way to use a whole lot of them at once? Well, we’ve shown you quite a few options already that use many buttons but we also know that bib necklaces aren’t necessarily everyone’s thing. That’s why we were so pleased to find a bracelet option that piles the buttons on instead! This idea from The Perfect DIY is as simple as stringing the buttons along a string or thread all at once through their centres and adding clasps. Easy as pie!

Perhaps we really caught your attention with the simply strung button idea we just showed you above but you’ve just kind of never been a big bracelet wearer? In that case, we have a feeling you might feel a little more enthusiastic about this simple button and chain necklace concept instead! Pearls and Scissors shows you how to make it happen by choosing buttons that have holes big enough for a thing length of necklace chain to fit through. You can use a chain from an old necklace you already had that lost its pendant or you can make it yourself with wholesale chains and clasps.

Were you pretty intrigued by the single button and jewelry cord idea that we showed you earlier but you’re just not sure the bright colours they used were for you? Then maybe something a little more neutral would suit you better! We’re pretty big fans of the way Craftionary used light and dark leather strings woven through the centres of large, neutrally coloured buttons. This tutorial will show you how to weave your own slip tethers so you don’t have to attach metal clasps that would distract from the rustic aesthetic of the piece!

Have you made other awesome button jewelry pieces that you really enjoyed creating and wear all the time but that you don’t see on our list? Tell us all about how you did it or link us to photos of your finished work in the comments section!

DIY Wine Cork Necklace – How to Make a Beautiful Necklace