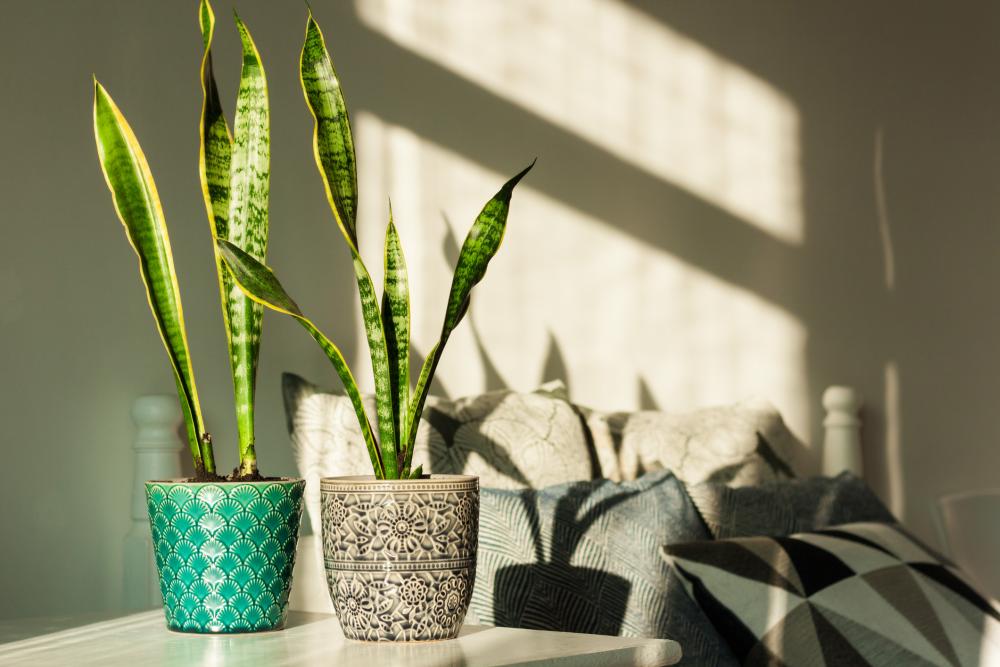 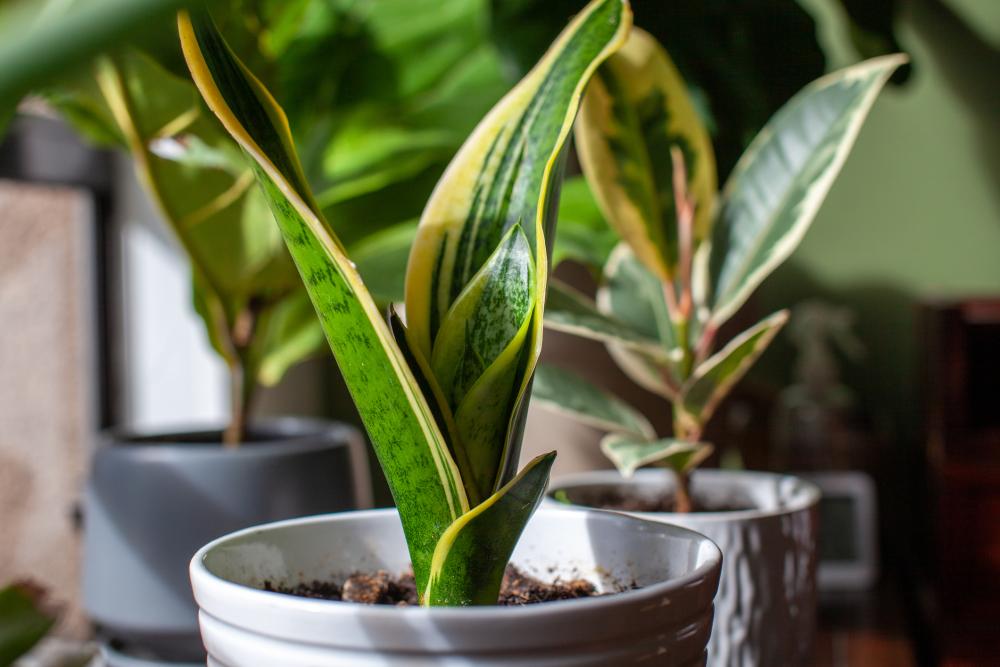 Growing snake plants for their ornamental value is something most growers with a high appetite for houseplants can’t do without. In this guide, we’ve narrowed it down to the Sansevieria Trifasciata Black Coral plant. The variety is a perfect pick if you’re looking for a type with slender leaves. 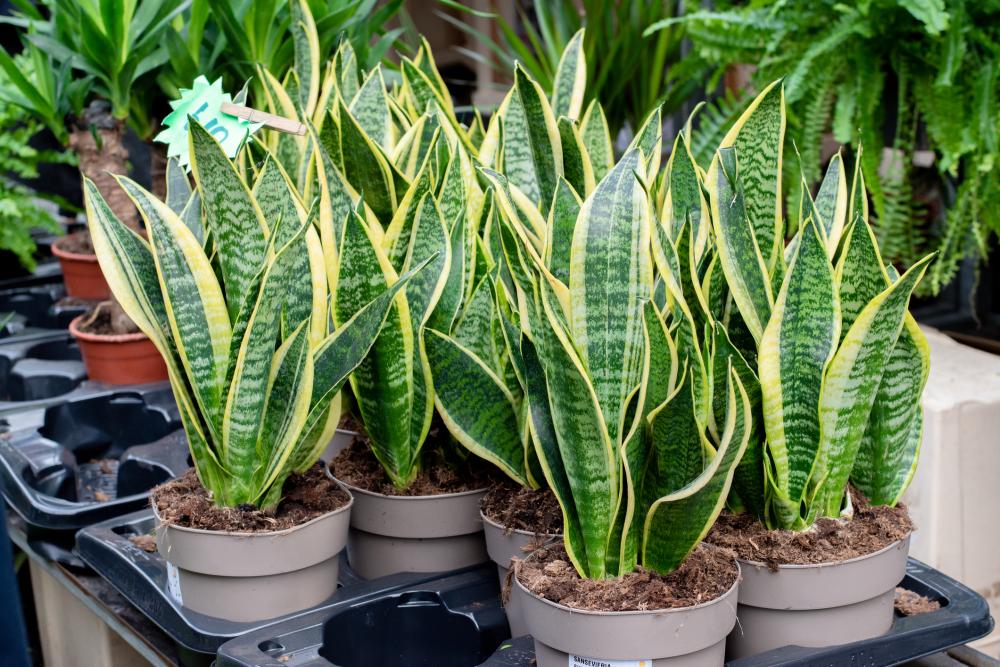 This hardy succulent is one of the most sought-after members of the Sansevieria genus because of its stellar aesthetic and potential to withstand extreme growing conditions. Let’s give you our two cents on growing and caring for the black coral houseplant.

More About the Black Coral Sansevieria

The Black Coral is a slow-growing tropical type that forms a tasteful rosette made of pretty thick foliage. On average, the leaves can reach up to 35’’ inches long even when growing indoors. They also span to about 2.5” inches wide. The foliage is dark green with some light gray-green markings that cross the dominant color.Same as its cousin, the African Spear plant, this Sansevieria variety takes time to reach its optimum height. Snake plants tend to look more contemporary, and easy to care for compared to most other commonly adopted houseplants.

They tend to have an inimitable way of handling dry air. Apart from the Black Coral, there are a bunch of other Sansevieria varieties in nurseries and gardening stores to try out. During its initial sprouting phase, the plant will feature leaves with a dark tone that’s almost black. It’s more reason why the houseplant is labeled ‘Black Gold’ in some gardening stores. The evergreen plant is a member of the Asparagaceae family and is native to the tropical regions of West Africa.

One downside about the Black Coral plant is its blooms are quite insignificant. There are also slim chances it will produce any flowers when growing indoors. The blooms are usually white in color and often develop in clusters. You can expect this tropical plant to bloom during the summer season. While the blooms have a shouting fragrance, they won’t last forever.

Your black coral plant will thrive in USDA hardiness zones 9 to 11. It doesn’t do well with frost tolerance. When growing this Sansevieria member outdoors, place the medium in a position where it gets enough bright, filtered light. Typically, the Black Coral prefers temperatures ranging between 70 to 90 degrees Fahrenheit. While it can withstand slight fluctuations, temperatures falling below 50 °F will cause the plant to lose its vibrancy.

The average room temperature can also help your Black Coral mature without hurdles, as long as there’s enough shade. Bring the plant inside during winter to protect it from the irreparable effects of frost. When growing indoors, normal room temperature will suffice. Keep the growing medium far from direct light as it could scorch the leaves. Any intense heat especially during the afternoon hours can bleach the foliage color.

Even though snake plants grow optimally in bright light, they seem to have an astounding tolerance against low light conditions. For this reason, you’ll find most growers opting to place the medium in their offices or spots that don’t receive enough light.

Being tropical in nature, snake plants like to grow in an environment with moderate levels of humidity. What’s impressive about Sansevierias is they aren’t fussy about dry, stuffy air. So, you can place the medium in your bathroom where humidity is higher. The ideal range should fall anywhere between 40 and 50 percent. If the levels drop below that, the leaves might start becoming droopy.

When potting this houseplant, a normal succulent mix is the perfect soil structure to work with. You can choose to use normal potting soil, then amend it with sand to increase its rate of being permeable. The goal of making this kind of amendment is to help drain any excess moisture that could lead to root rot.

What we tend to find practical when growing Sansevierias is adding normal potting soil in a commercial cactus mix at the ratio of 1:1. Well, if the mix feels a bit dense, you can add pumice or perlite to boost aeration and the rate of drainage. While drainage is of utter importance, the soil needs to retain some moisture because the leaves desperately need it.

Mulching the topsoil also helps a lot with moisture retention. Use a sizeable container that would compactly fit the houseplant but leave extra room for growth. Transplanting won’t be quite necessary as most Sansevierias tend to have a slow to moderate rate of growth.

Overwatering is a major snag for snake plants. You don’t want to deal with root rot as it tends to be a common problem in this tropical plant that’s often difficult to treat. Before watering your Black Coral houseplant once again, make sure to check whether the first few inches of the potting soil are entirely dry. Keep the soil evenly moist but not too soggy to avoid root rot or the spread of fungal infections. Primarily, the watering intervals will vary depending on the soil structure, growing pot, temperature, and humidity levels. Most Snake plants roughly need to be watered at intervals of between 2 and 8 weeks—it all hangs on how thirsty your houseplant looks. You need to drastically reduce the watering intervals during winter when the temperatures are extremely low.

If you have some Sansevierias growing inside large pots, you can moisten the soil once every 8 weeks during the colder months. Leaves might get mushy if moisture gets stuck in the middle, so you want to avoid overhead watering. Matter of fact, this tropical type is more likely to struggle with root rot during winter due to overwatering. But what’s gladdening about the Black Coral plant is it displays slight tolerance against dry conditions. You, however, don’t have to be complacent about it. Try as much to follow the watering schedule, especially during the growing months. When growing outdoors, you can let it depend on rainwater, but remember to chip in when there’s prolonged drought, primarily when it’s summer.

Using fertilizer to boost growth isn’t necessary. The Sansevieria Black Coral typically sprouts somewhat more like a weed and doesn’t need to be fed to look glamorous. There’s only one exception that would prompt a grower to use fertilizer. If you’re looking to grow this tropical houseplant inside a pot, then there might be a need to revive it back from its dormancy. For this reason, you need to feed it during the first weeks of spring, to give it a head start for new and faster growth.

You can use a general-purpose fertilizer as long as it’s well-balanced. Most commercial fertilizers are potent, so we recommend diluting it at half its strength to avoid bleaching the foliage. Use the plant food once every month during summer and spring when the houseplant is in its active growth stage.

One of the most appealing aspects of the Black Coral houseplant is it isn’t invasive and doesn’t require any significant grooming. Place the growing medium in a spot that receives enough light to avoid the struggle of having to deal with leggy growth. You might also need to prune leaves that look overly pale or seem to suffer from fungal or bacterial infections.

How to Propagate the Black Coral Snake Plant

Propagating this type isn’t a strenuous task, hence you won’t need to purchase a new snake plant from the gardening store. Surprising enough, the houseplant is capable of self-propagating by spreading its stems and rhizomes beneath the ground. You can also choose to use the division method when the plant is dormant. The easiest way out would be to propagate using stem cuttings. With stems cuttings, you just need to pick those that look healthy from the mother plant, give the wounds some time to heal, then prepare the potting soil. Make sure to use sterilized tools when taking the cuttings to prevent the spread of diseases that could hurt your plant’s well-being.

Leave the cuttings in the open to dry before planting. During this time, they should form a callous that protects them from infections. After planting, keep the soil lightly moist, then place the medium in a spot with enough access to bright, filtered light. Be a little patient while waiting for the cuttings to sprout and form sturdy roots. The other option at the table is to reproduce your Black Coral Sansevieria using offshoots that fall off from the mother plant and grow on the edges of the container. Moist the soil to reduce friction that could break the offshoots when uprooting them.

Sansevierias aren’t quite much prone to serious pests or diseases. However, its high affinity for moisture retention is more likely to attract scale insects. Scale insects tend to leave a white, thick substance that’s sugary on the underside of the leaves. You might need to prune some infested parts if the damage is significant. Using neem oil on the affected areas is an effective natural remedy that could help get rid of the bugs.There are instances where you might also have to deal with spider mites. They can be suppressed by spraying the affected areas with warm soapy water. Always check for any microscopic deposits on the underside of the leaves when running your routine maintenance to know whether your Black Coral Sansevieria is struggling with scale insects.

Fungal growth might crop up if your houseplant is suffering from root rot due to overwatering. The condition might prompt you to lose the entire plant and grow a new one right from scratch. Fungal infections often start to show up at the base of the plant. Check if the soil structure is suitable for easy drainage, and make changes to your watering patterns. While this tropical houseplant isn’t invasive, it’s been proven to hold mild toxicity levels. It’s also worth getting a hang of which Sansevieria types are toxic to pets.

Sansevieria Cylindrica Care: How to Grow & Care For The Cylindrical Snake Plant

Sanseviearia Zeylanica: How to Grow & Care for the Bowstring Hemp