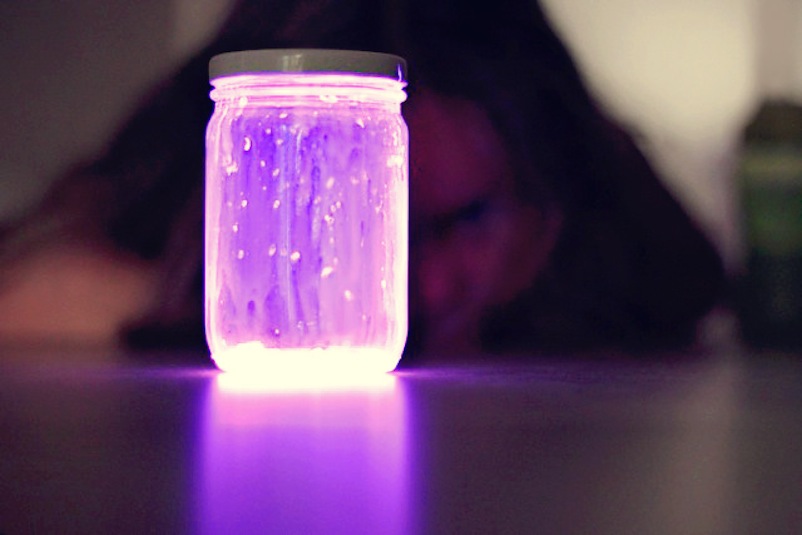 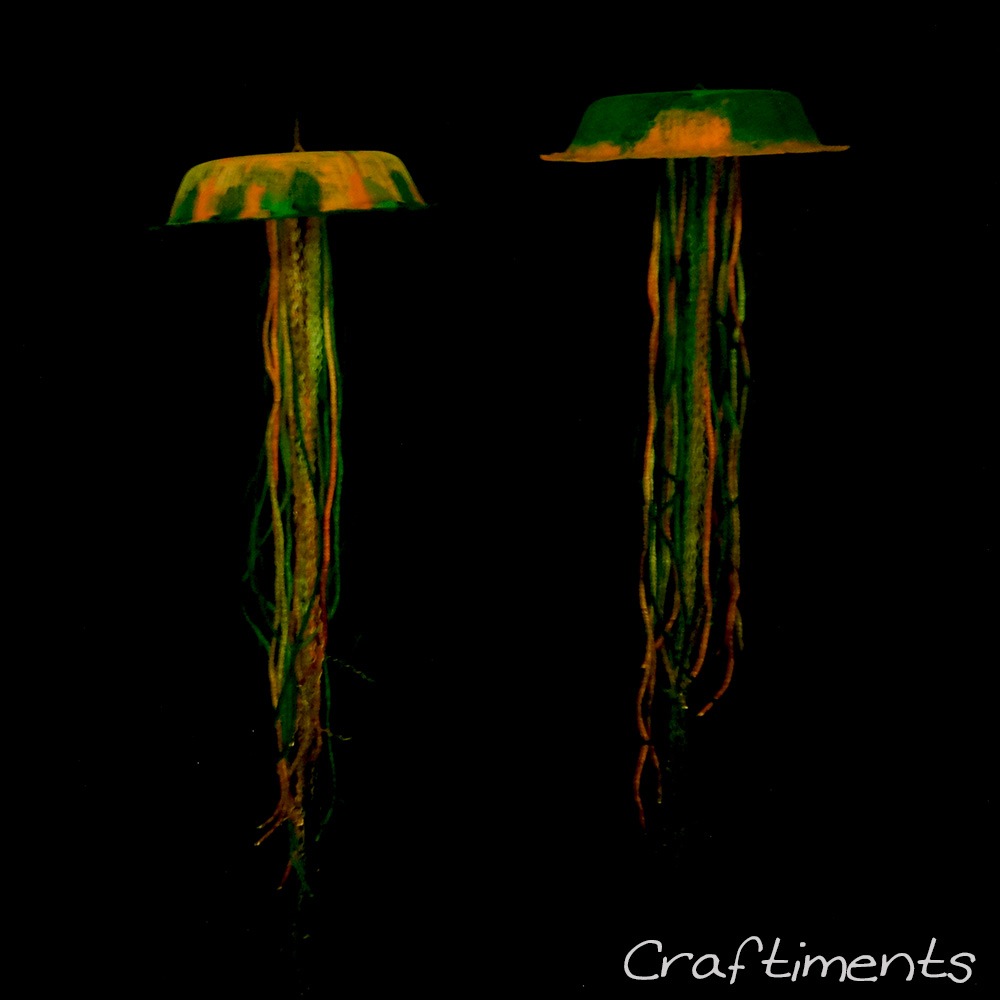 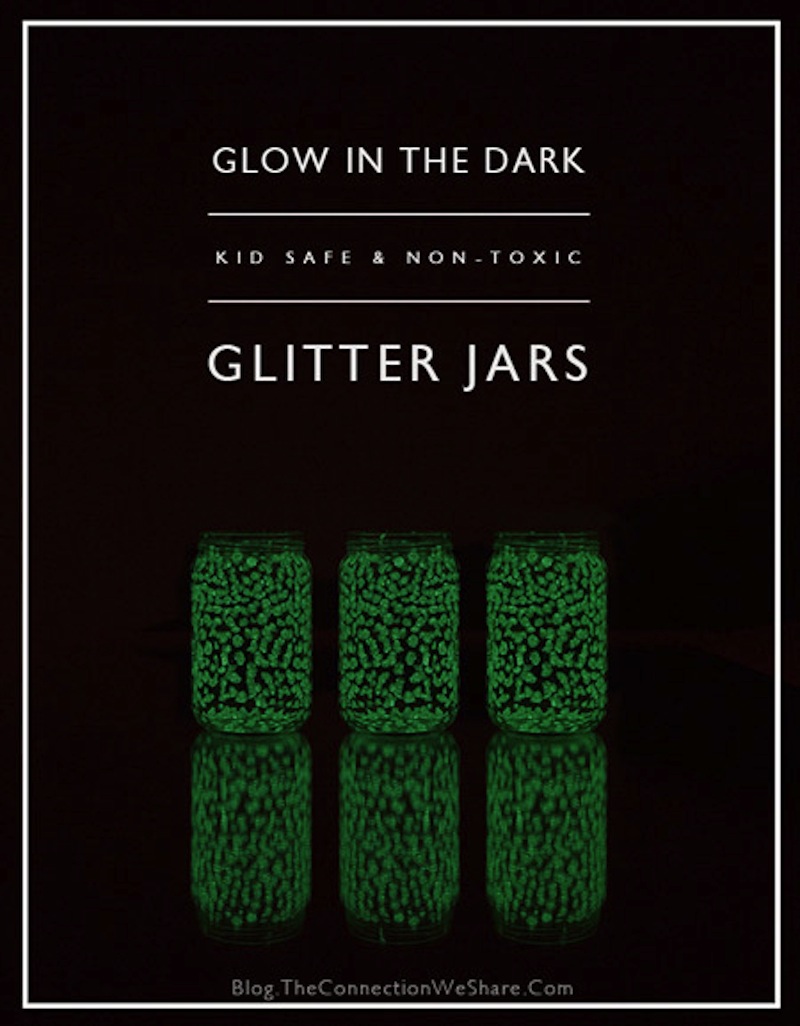 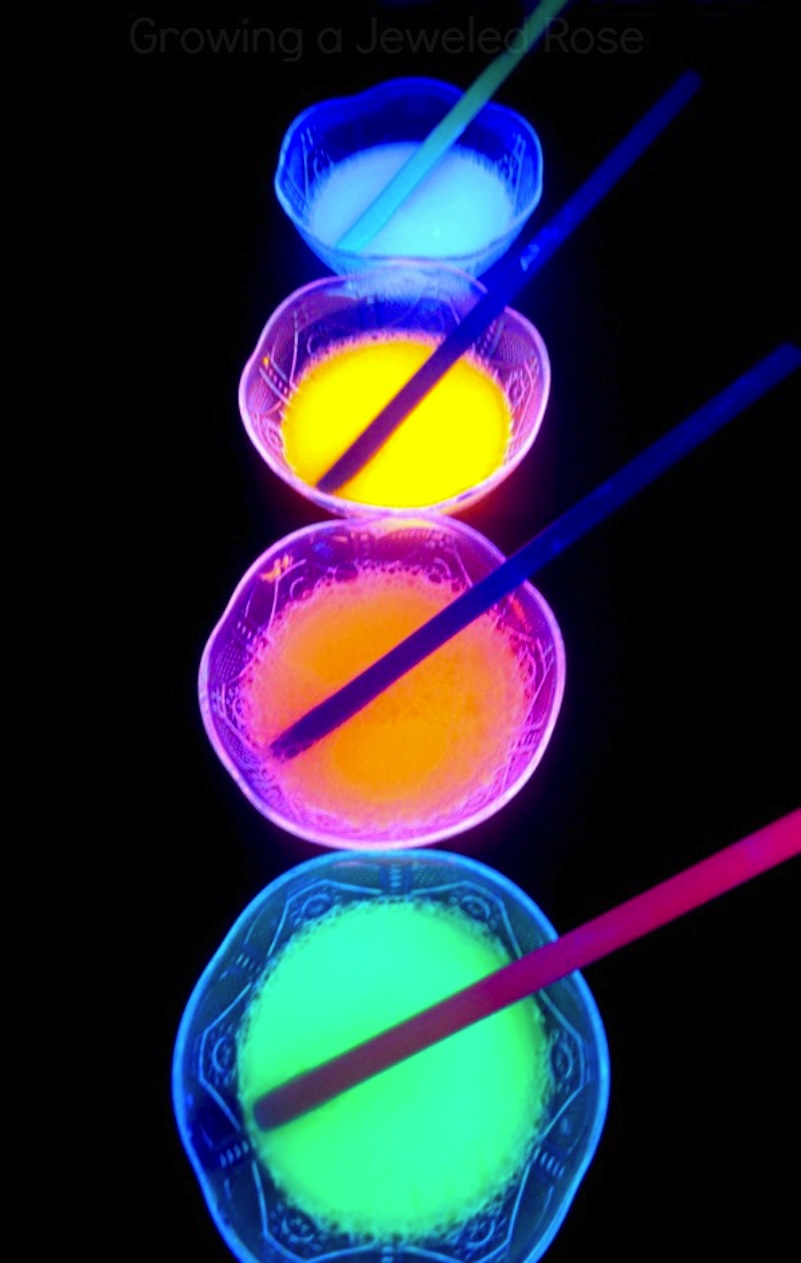 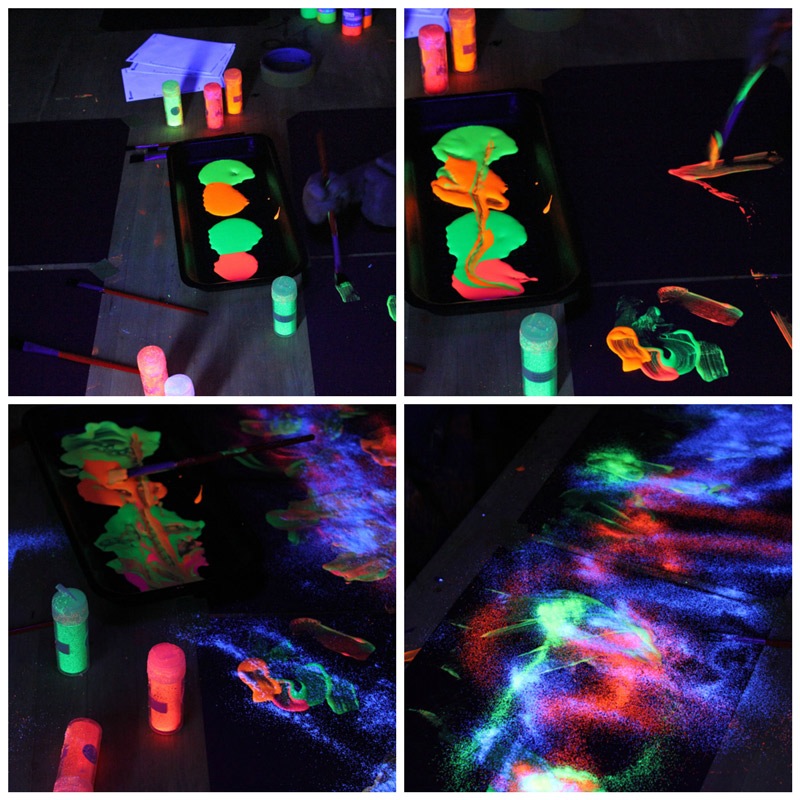 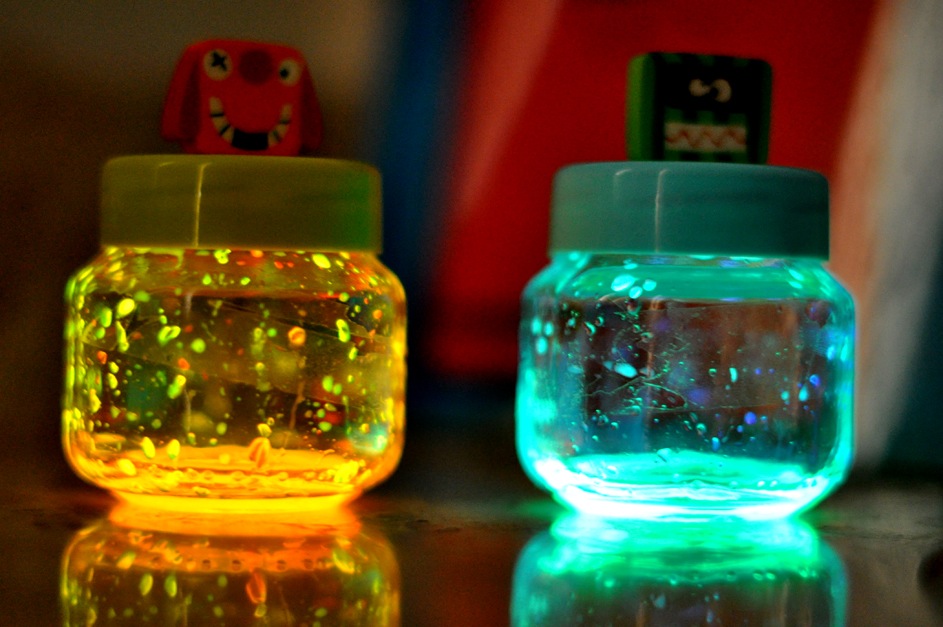 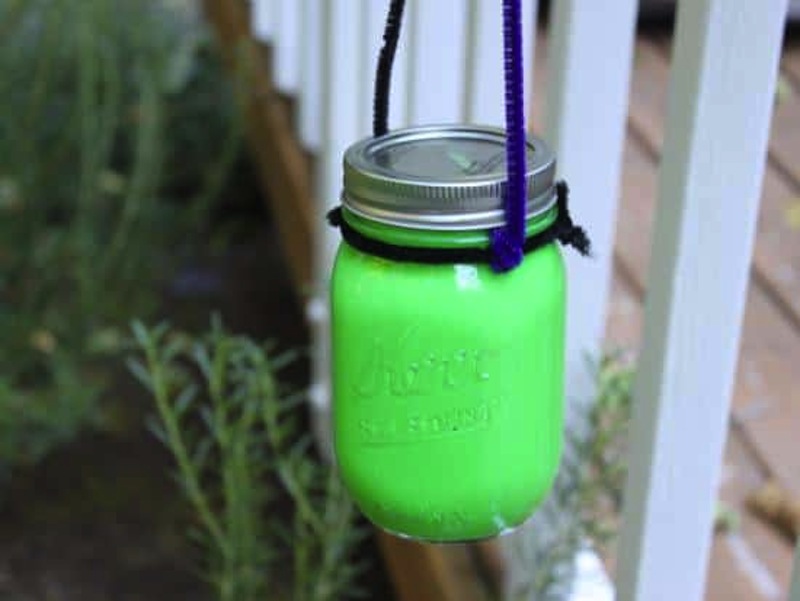 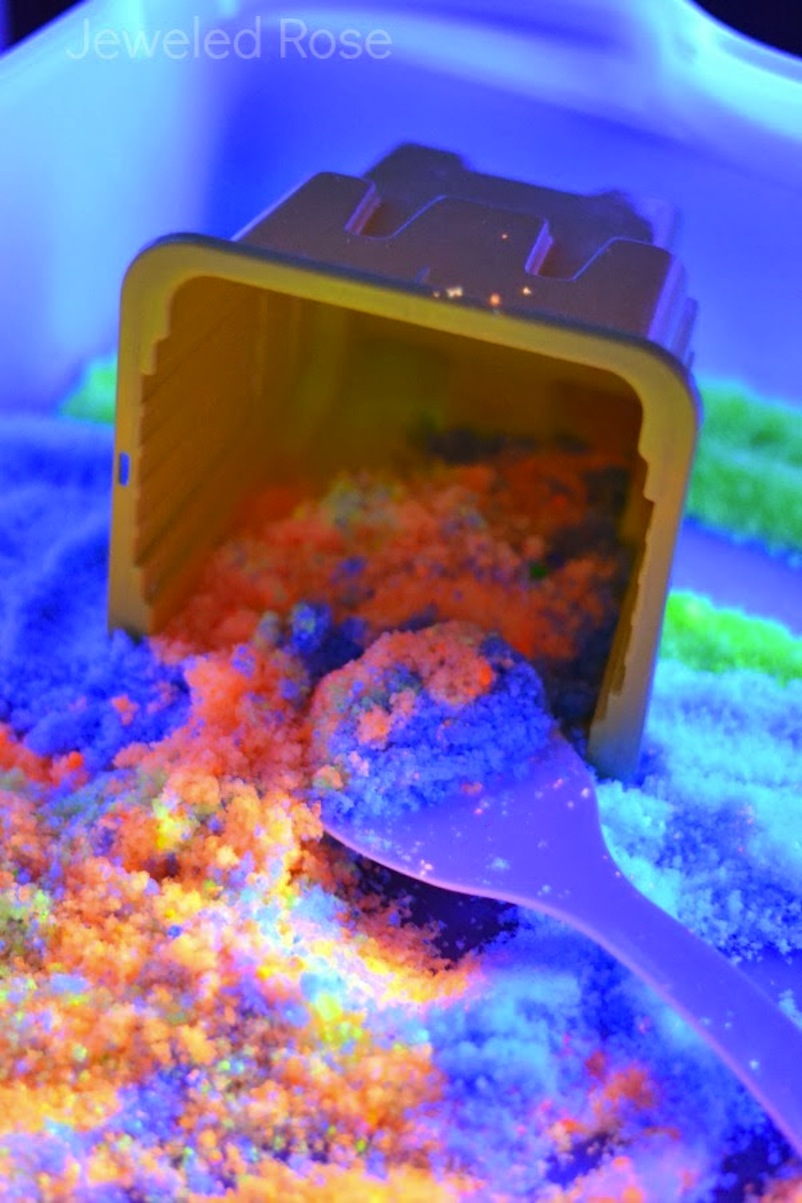 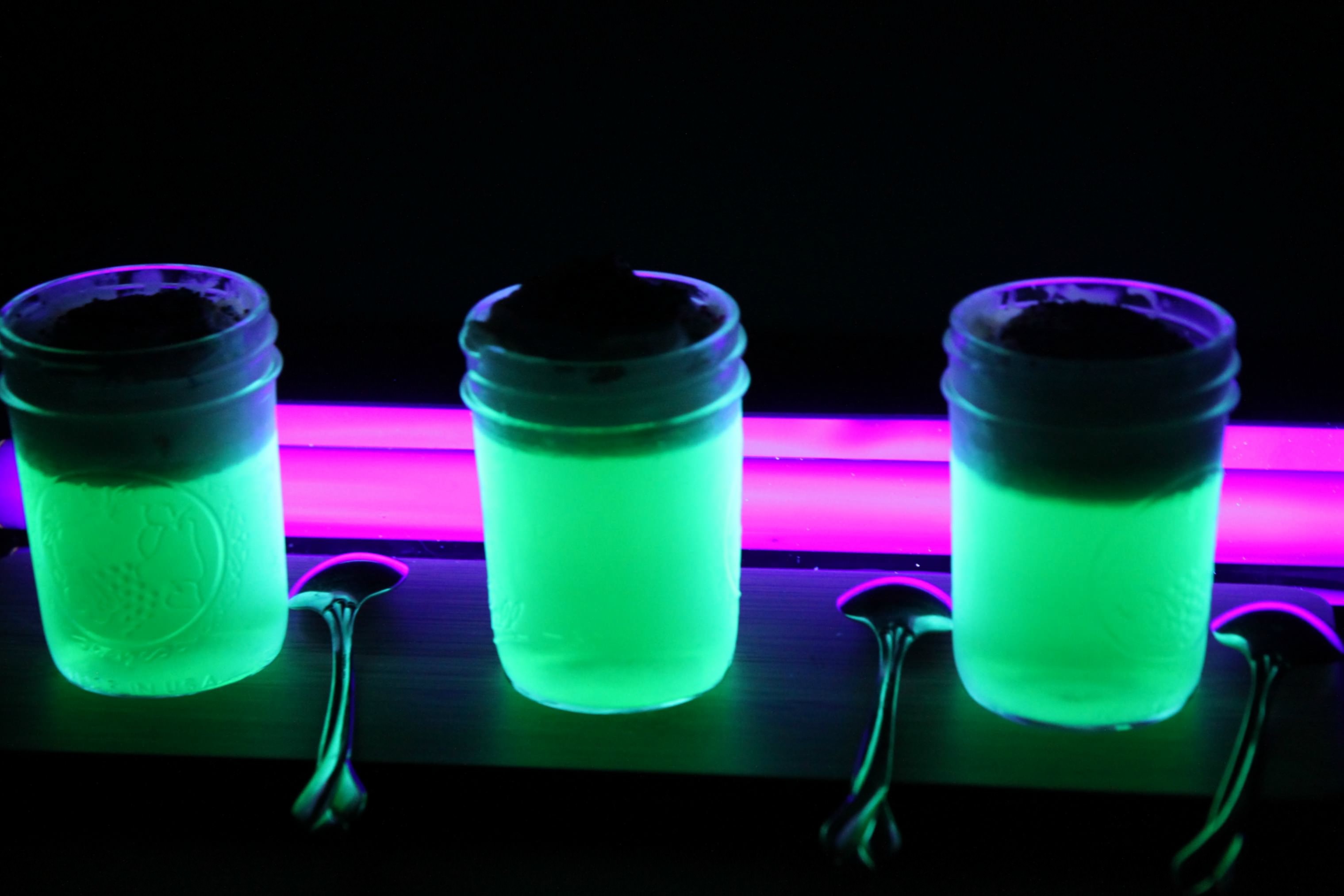 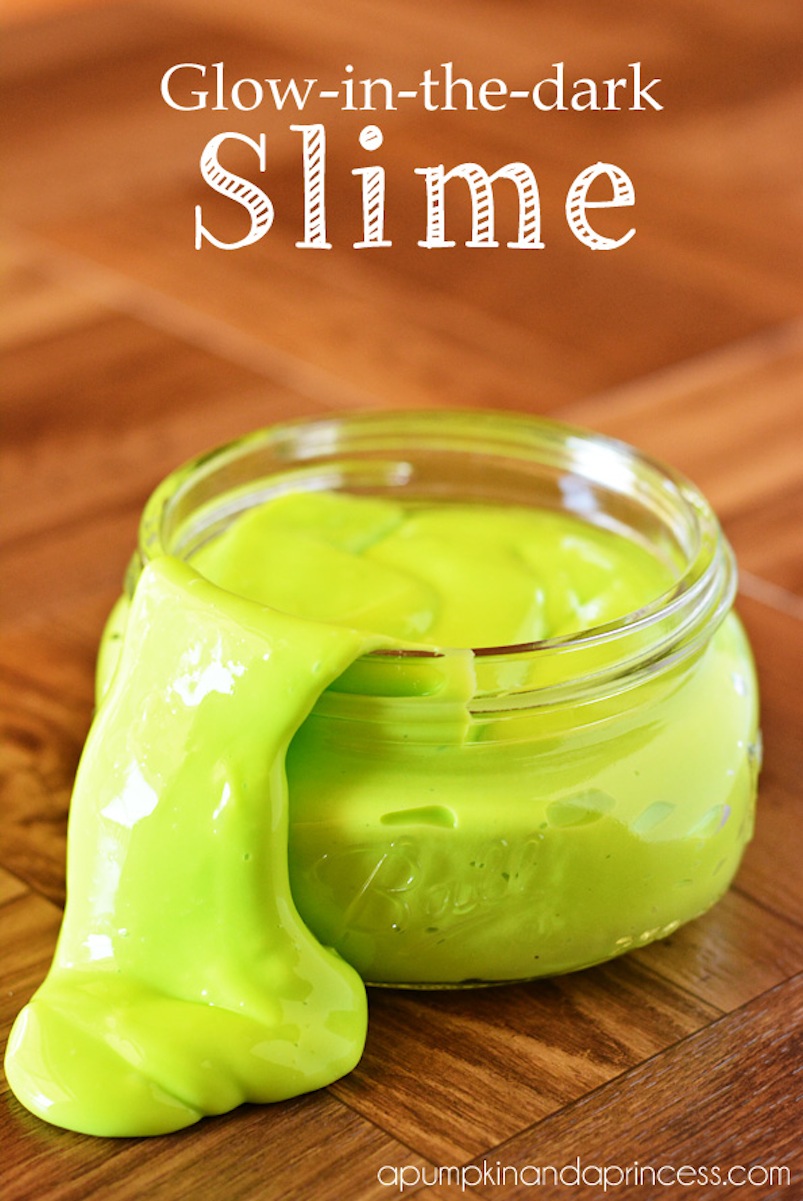 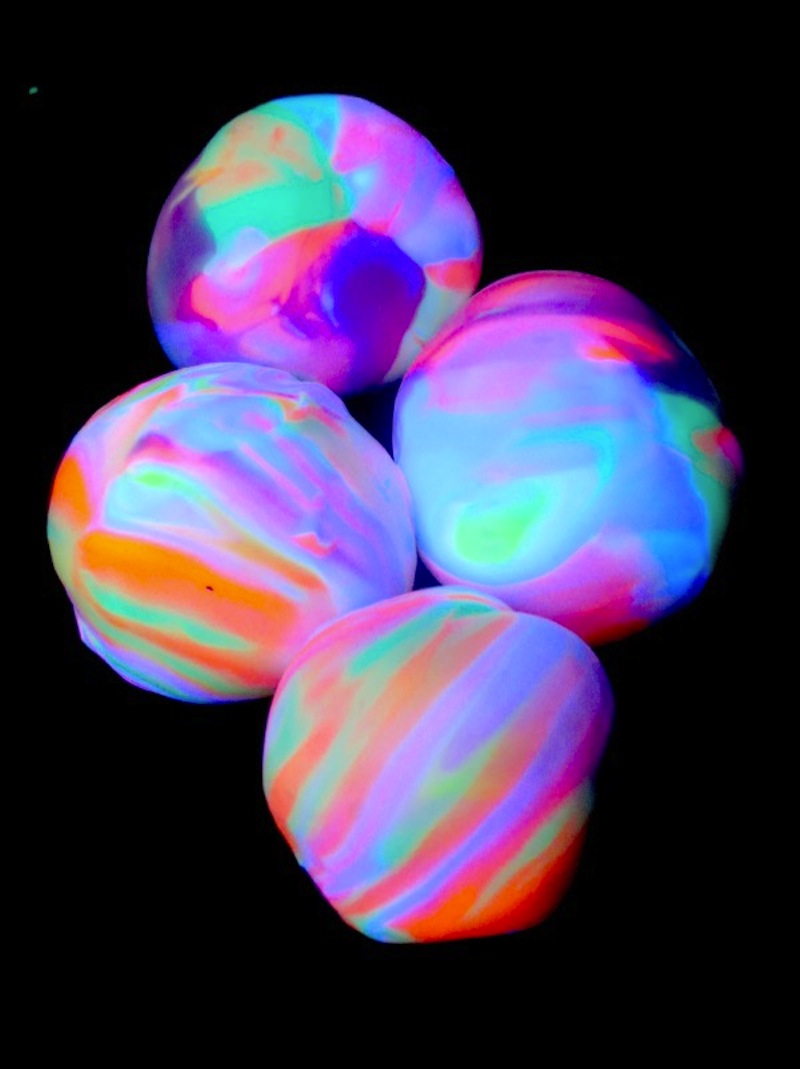 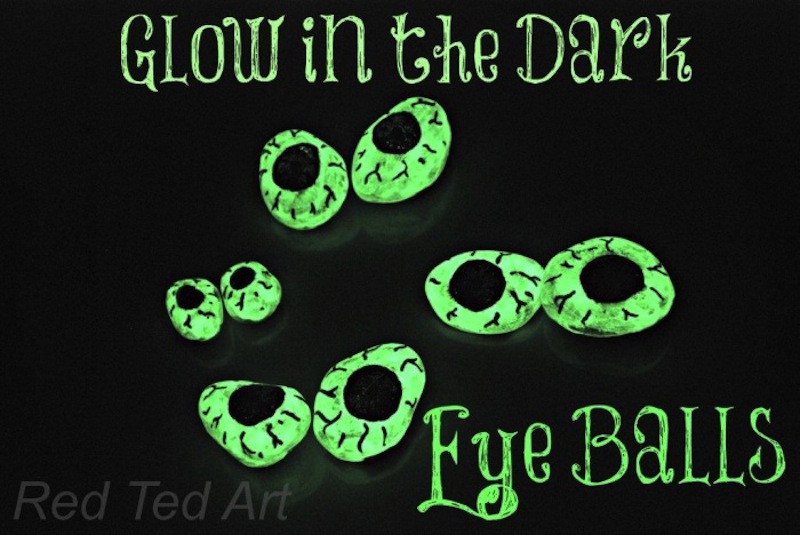 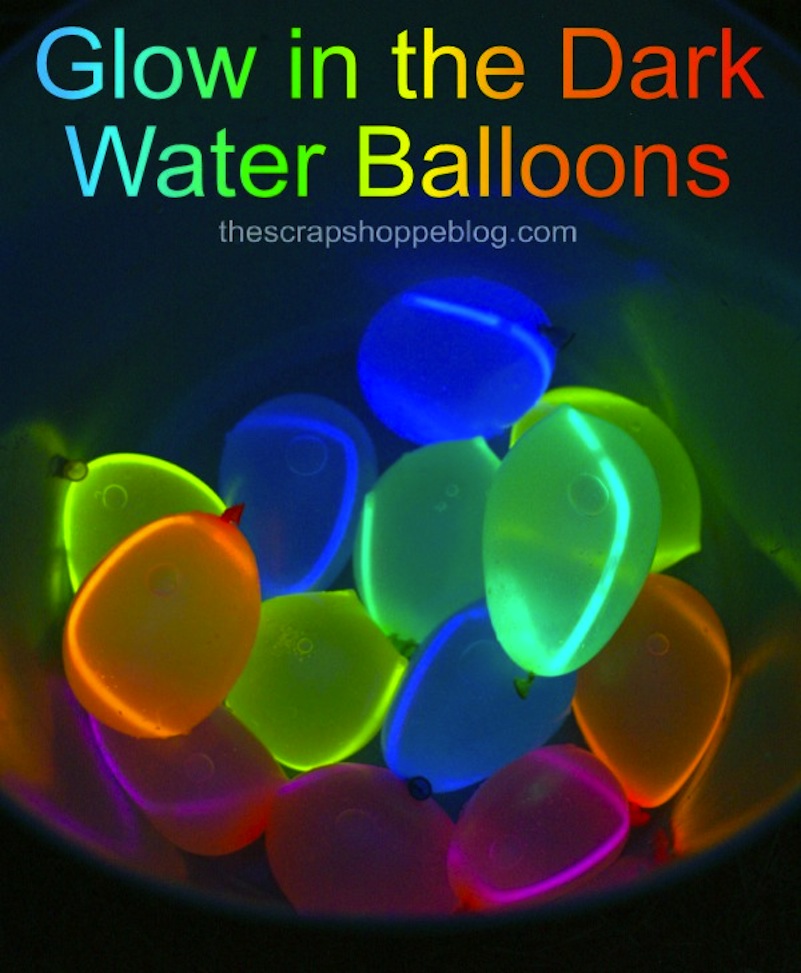 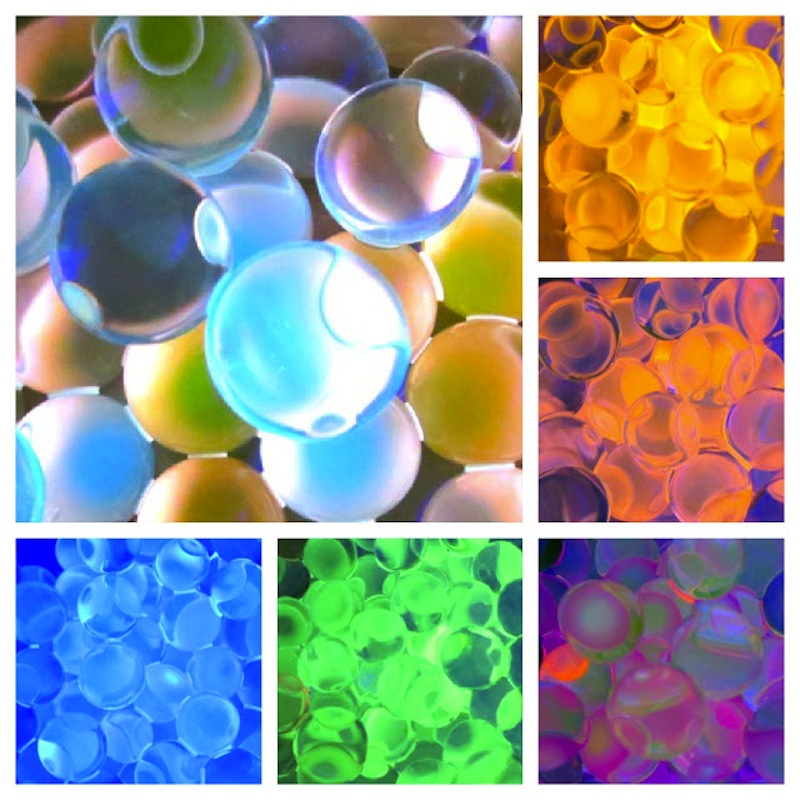 We love crafting of any kind. We often make complicated things that have taken us years to perfect the techniques for, but sometimes our very favourite projects are the silly ones we do with our kids. Few things are more rewarding than spending a fun afternoon with your little ones and seeing how their faces light up when you come up with something new and exciting for them to do. Our latest awesome crafting trend to try with our kids is so cool even we can’t get enough of it. We’ve discovered the joy of glow in the dark crafts!

Check out these amazingly awesome glowing kids’ crafts that will have your kids squealing with creative glee and feeling like they’re doing science all at once.

Did you know that you can make an awesomely coloured glowing lantern with just two things? We didn’t either, so imagine how excited we were when we discovered this mason jar glow lantern! Lil Blue Boo guides you through the simply steps of coating the entire jar with the glowing mixture and making sure it’s closed properly so things don’t get too messy.

2. Glow in the dark jellyfish

Working with glow sticks is always fun, but what if you had your heart set on something a little more crafty in terms of the creative skills it takes to make it? Then help your kids’ glow crafts be actual crafting time by making these awesome glowing jellyfish with them! Craftiments shows you how to make these from paper plates, yarn, ribbons, and glow paint.

When it comes to crafting, our policy is that glitter is always welcome and our kids completely agree. In our house, the more glitter, the better! With that in mind, we’re sure you can picture how excited our kids were when we combined glitter with glow paint! Check out how these sparkly spotted glowing jars are made on The Connection We Share.

4. Glow in the dark bubbles

Growing a Jeweled Rose guides you through the awesomely fun process of creating bubbles that literally glow in the dark when you blow them. Even we were impressed! Bubble soap might not be something that you use with very small kids, but as long as your children are old enough to learn not to suck backwards through the straw and ingest the soap, this idea will be a big hit!

Did you like the idea of working with glow paint and glitter but you think your kids would like to get a little more hands-on and messy than just pouring these things into a jar and shaking them around? Well, we certainly don’t blame them! Instead, check out how Babble Dabble Do mixed glitter and glow paint and let their kids get a little bit Picasso on some canvas before turning the lights off and getting their glow on.

Perhaps you very much enjoyed the glow jar concept but you know your kids prefer little novelty things the most? Then combine that idea with making these hilarious little monster characters that sit on top of the little glowing jar. Estefi Machado guides you through the process of making both the glowing solution and the funny little characters to go with it.

Have you ever seen a craft that glows so well it could almost light up the night? Well, we hadn’t either until we came across this fun glowing lantern idea by Kiwi Crate! Okay, so we know you won’t actually be able to light your way very well with a jar of paint, but this funny idea is made with a quality glow paint recipe that gives enough of an aura to amuse your kids and make them feel like they’re headed on an adventure.

8. Glow in the dark sand

When we started making glow in the dark themed crafts with our kids, the part we found perhaps the most amazing was how many craft ideas we’d already done could be re-done and still amuse our kids to the max. This glowing sand table idea from Growing a Jeweled Rose is the perfect example of what we mean. Sure, we might have made a fun sand table with our kids years ago that they use all the time, but this one was still extra exciting for them because this time… the sand glows! They felt like they were getting a whole new experience.

Do your DIY skills actually lie primarily in cooking, baking, and food-based things rather than actual hands-on crafting? Fear not; you can still totally get in on the glow in the dark kick without having your kids miss out! Mom Advice teaches you how to make a kid-friendly glow in the dark Jello dessert that actually glows even though it’s completely edible and non-toxic.

You read that right- slime. Just in case you aren’t always up on the latest in kids’ trends and DIY obsessions, craft stores everywhere have been selling out of the ingredients for “slime” lately and, personally, we think it’s completely awesome. Besides getting to be part of an awesome DIY process, making slime gives your kids something to play with even after you’re done making it! A Pumpkin and A Princess shows you how to make a glow in the dark version of the popular craft (because everything’s better when it glows).

If you’ve never made DIY bouncy balls at home, then you’ve been missing out! The homemade kind might not bounce quite as high and fast as the classic “super balls” that come out of gumball machines, but that just makes them a little safer to play with in the house. Instead of making them plain, however, we’d suggest following this tutorial on Growing a Jeweled Rose to make swirling glow in the dark ones instead!

Within your kids’ new obsession with glow in the dark crafts, have they also developed a small preoccupation with the thrill of things that are just a little bit spooky, even if it’s not Halloween right now? Then this painting craft is perfect for them! Redted Art guides you through the process of choosing some fun shaped rocks, covering them with glow paint, and adding circles and lines with markers so that they look like veiny, spooky glowing eyeballs when you turn off the lights!

Did you love the idea of making your kids a play table that will amuse them for hours and incorporating that into your glow in the dark DIY time but you don’t have sand right now or you’d prefer not to have sand in the house? Then try making them glow rice instead! They’ll be able to dig and fill buckets just like with the sand. Growing a Jeweled Rose shows you how to colour some of the grains so that when you turn a black light on the ride, everything glows different shades.

14. Glow in the dark water balloons

Design Dazzle guides you through the process of making your very own glowing water balloons in a quick and easy way. Simply slide skinny folded glow sticks inside the rubber balloons and then fill them up! The sticks are light enough that they won’t hurt anyone when the balloons burst in a water fight, but they make for extra fun on a hot summer’s night because, once you’ve thrown all the balloons at each other, your kids can play with the glow sticks in the dark to their heart’s content.

Water beads might not be as trendy now as they once were, but we’ve always loved the way they burst and dissolve in water. Of course, as with anything, we love them even more when they glow in the dark! Just in case you’ve never heard of beads that do this before, Growing a Jeweled Rose is here to show you how to make them yourself.

Do you know someone who loves glow in the dark things just as much as we do? Share this post with them for a little bit of unique crafting inspiration!