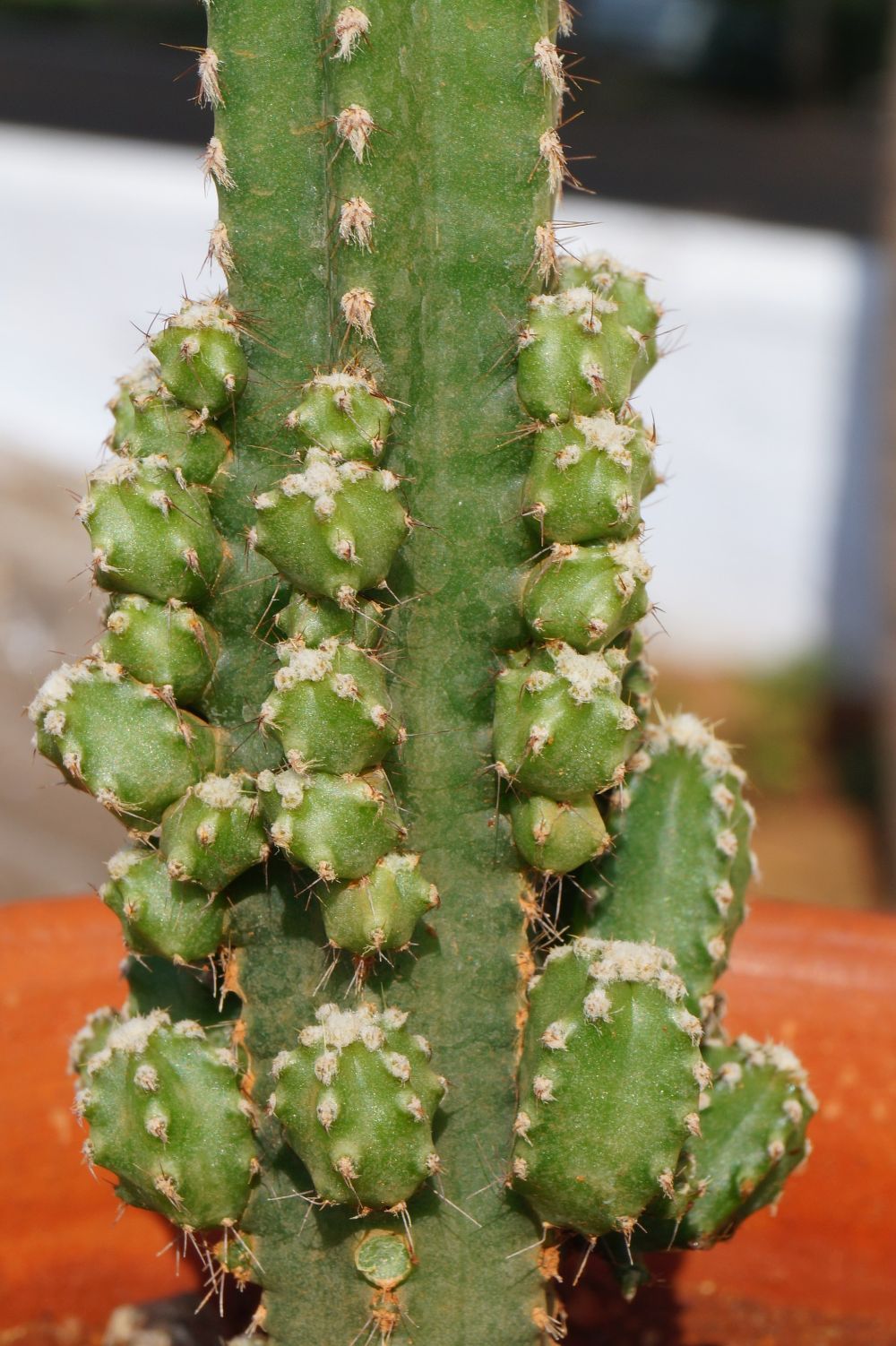 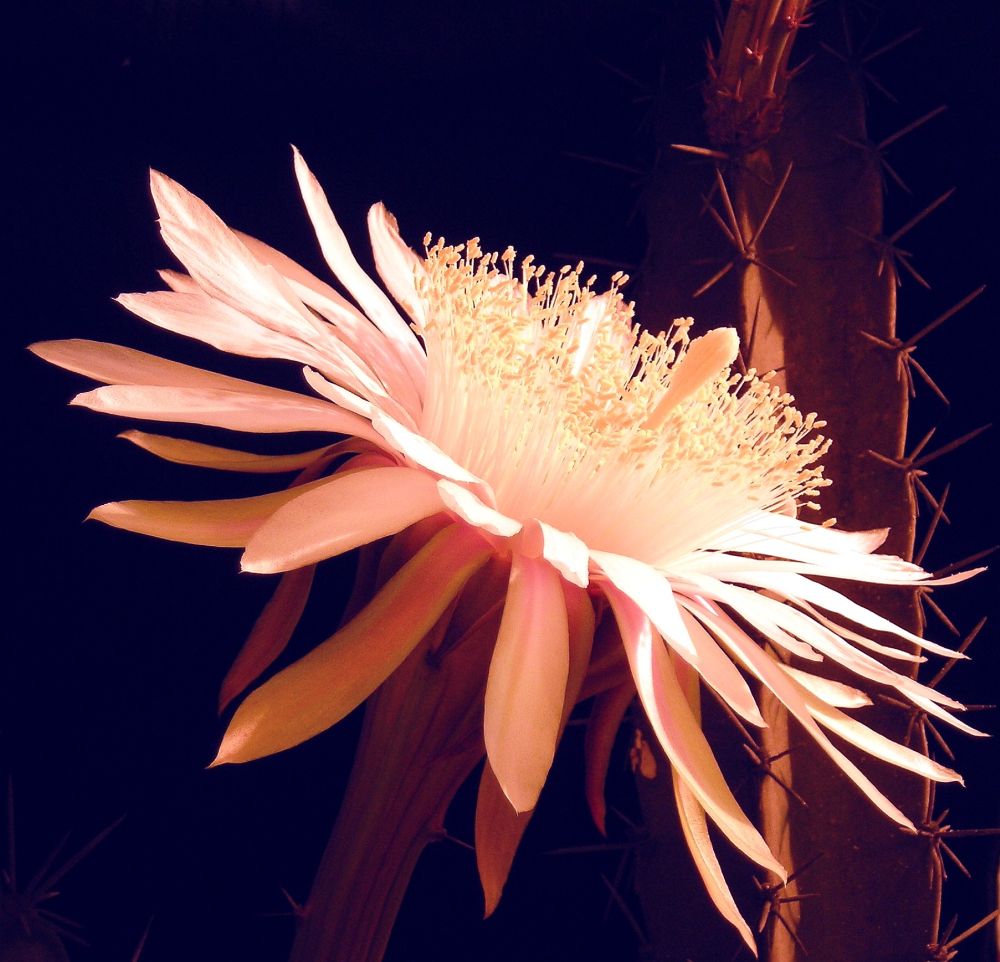 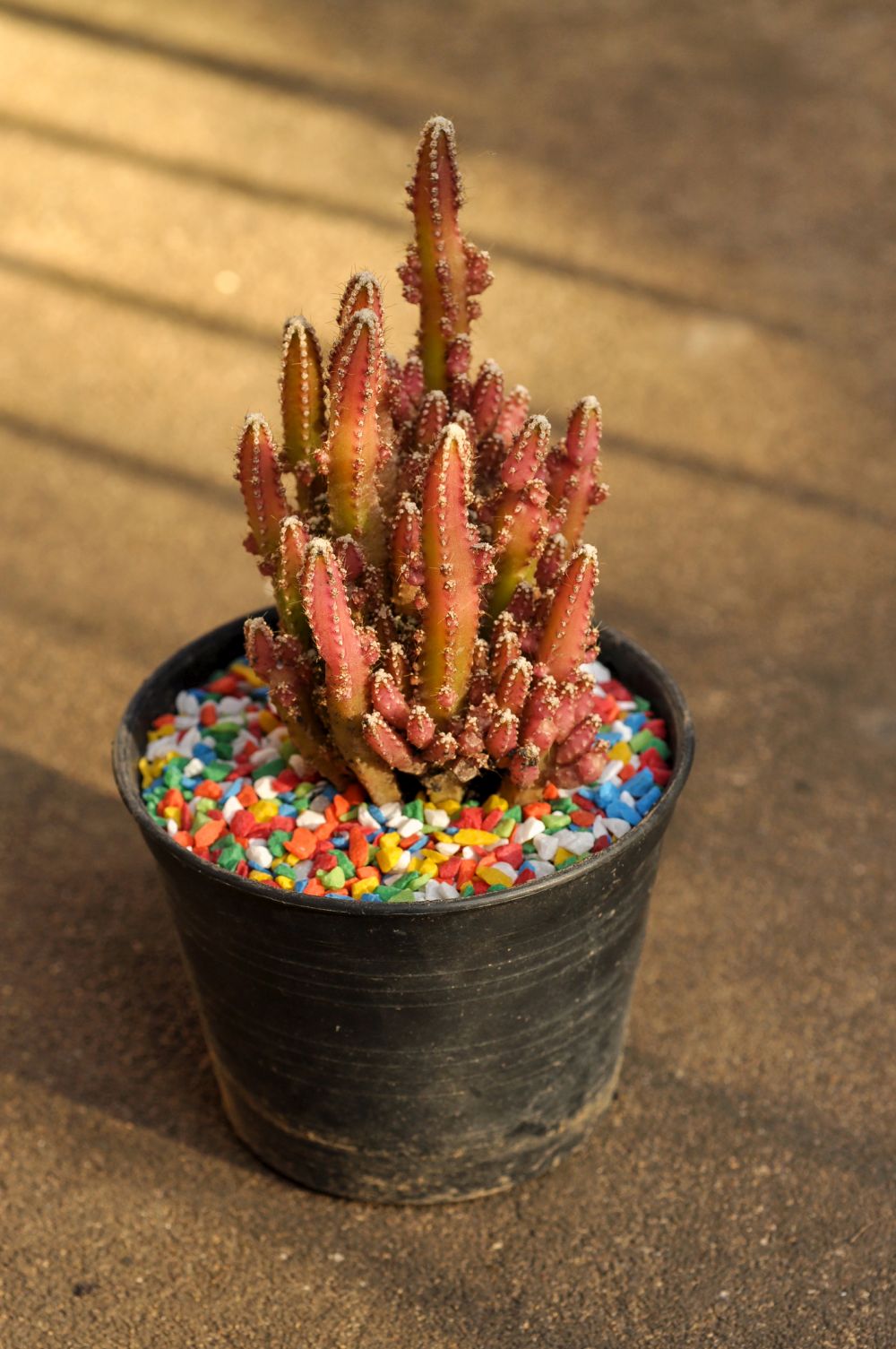 The hard truth every gardener ought to keep in mind is that not all slow-growing succulents are practically easy to care for and fit to be adopted as houseplants. But with the Fairy Castle Cactus, there are more perks to bag home after purchasing it from your local gardening store.

It’s one of the rare cacti plants with painless caring needs and stays intact even under acute neglect. Check this guide out for solid tips on growing and maintaining the Fairy Castle cactus. 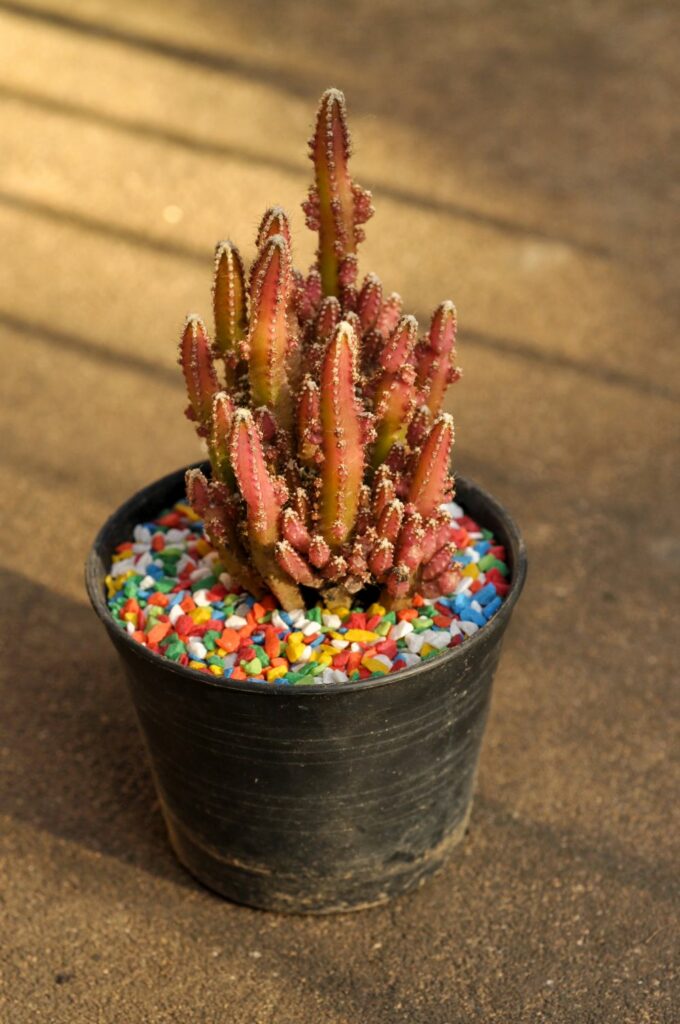 There has been a lengthy debate by experts about the right scientific name for this species. Some classify it as Acanthocereus tetragonus, while others name the species Hildmannianusand place it in the genus Cereus. Other sources suggest that this succulent was formerly known as Cereus tetragonus.

The fairy castle cactus is native to North, South, and Central America. Many growers label this succulent as the Fairy Castle since its columnar shape makes it look closely similar to the small towers known as turrets that project vertically on a castle’s walls.

Besides this common name, you’ll also see other gardening stores labeling it as the Barbed Wire Cactus, Triangle Cactus, Night-blooming Cereus, or the Sword Pear. Even though this succulent is a slow-growing plant, it has a wild potential to achieve plausible heights ranging between 6” to 25” feet.

The stems can grow up to 8” inches tall and hold areoles that are about 1” inch long. Since most plants’ common trait is enjoying the full sun, you need to consider growing your fairy castle in a warmer environment. If you’re looking to grow it outdoors, this succulent thrives best under USDA hardiness zones 10 to 11.

It’s quite an uphill battle for the Fairy Castle when it comes to blooming. But for the rare chances, it’ll produce flowers during a growing season, they’ll appear bright, wide and make the plant bring some increased levels of positive energy to your living space.

On average, the height of the blooms will range from 3” to 6” inches, while they’ll span between 5” and 8” inches.You, however, need to brace yourself for tons of patience since it could possibly take more than a decade for your Barbed Wire Cactus to bloom.

Don’t expect this species to produce so many blooms, and if it does, there are chances that you’ve bought a variegated type that has been brought to life through genetic mutation. All you need to do so you can make this succulent produce flowers in different shades of white, purple, or pink is give it the optimal growing requirements it needs to reach its maturity fast enough.

As is the typical situation with most other celebrity cacti plants grown across many households, the Fairy Castle tends to find pleasure in bright and warm environments. So, you want to place the growing medium somewhere with sufficient sunlight access for about 6 hours each day.

Freezing conditions or placing your Night-blooming cactus near an air conditioner would rip its vigor off. Basically, cold weather deprives your plant of its moisture and causes the stems to wilt since the cells that help them remain erect will collapse.

Being a slow-growing succulent with USDA hardiness zones 10a through 11b, it practically suggests that the Fairy Castle Cactus can survive under regions with warmer temperatures. When it’s summer or spring, cacti plants are usually in their active growth period, so they’ll tolerate temperatures between 7 °C -29 °C, depending on the species.

Contrary to the bland notion that cacti plants are, to some solid extent, drought-tolerant plants, that’s not to say they can survive under excessive heat. So, try to keep the room temperature below 90°F, especially during the warmer months. Too much heat will cause some ripple effects on your Fairy Castle cactus plant.

One of the common signs that indicate your plant is stressed due to intense heat and sunlight would be white or pale patches forming on the stems and spines. And the only remedy for offsetting such a condition is cutting off the affected areas on your plant, especially those that have turned black and look entirely wilted.

Some newbie gardeners are often guilty of using a standard potting mix to grow new cacti plants. In your quest to make the best growing medium for your Fairy Castle plant, you need to consider using well-draining soil and amend it with equal parts of perlite and pumice.

Natural organic perlite helps accelerate the drainage process, while pumice absorbs excess moisture to protect the roots or the base part of your houseplant from decaying. Another equally suitable element for preparing some DIY potting soil is sand since it also helps boost the drainage capacity by an outstanding margin.

Transplanting would be necessary if your Fairy Castle outgrows its initial container. It also needs sufficient room for the development of the root system. So, transplanting ideal intervals can be every two to three years, mostly during a growing season.

As any other succulent, the fairy castle cactus has some peculiar watering needs. It won’t survive if you use the same watering intervals as for other houseplants. But that’s not to say you have an option to neglect your Acanthocereus Tetragonus entirely.

An elementary watering method would suffice and help your cactus thrive for decades.And while doing so, you want to make sure the drainage holes are letting out any excess water. For succulents that have the potential to grow both indoors and outdoors, such as the fairy castle, the soak and dry method would work just fine.

Wait for the soil to dry out completely before watering your houseplant again.Lessen the number of times you water your fairy castle when it’s winter. One of the most facile ways to keep your plant’s watering schedule in check is to keep a record, especially if you’re bombarded with the caring and maintenance needs of other plants in your home.

A concise watering history for each fairy castle in your household allows you to have an update of when next to moisten the potting soil. When it comes to feeding, the best part is the fertilizing needs for cacti plants tend to be overly simplified, even for first-timers.

Any soluble fertilizer that’s rich in phosphorus and nitrogen fits as a potential solution to help your fairy castle yield healthy internodes, spines, and bloom opulently. Most importantly, you need to make sure that the essential macronutrients in the solution are at the rate of 5-10-5. Use the cactus fertilizer, preferably during spring when the growth hormones are resuming from their dormancy, and avoid feeding your plant when it’s winter.

Compared to most other houseplants, the fairy castle is by far a less-demanding and low-maintenance succulent any beginner would love to adopt and care for. The most needful requirement you’ll need to worry about is the drainage capacity.

And that’s why we quite often vouch for clay pots since they help any excess water evaporate much quicker. You also need to get rid of any part that looks sick and could potentially ruin the entire plant’s wellbeing. Move the growing medium indoors when it’s winter since most cacti plants aren’t tolerant of frosting conditions. 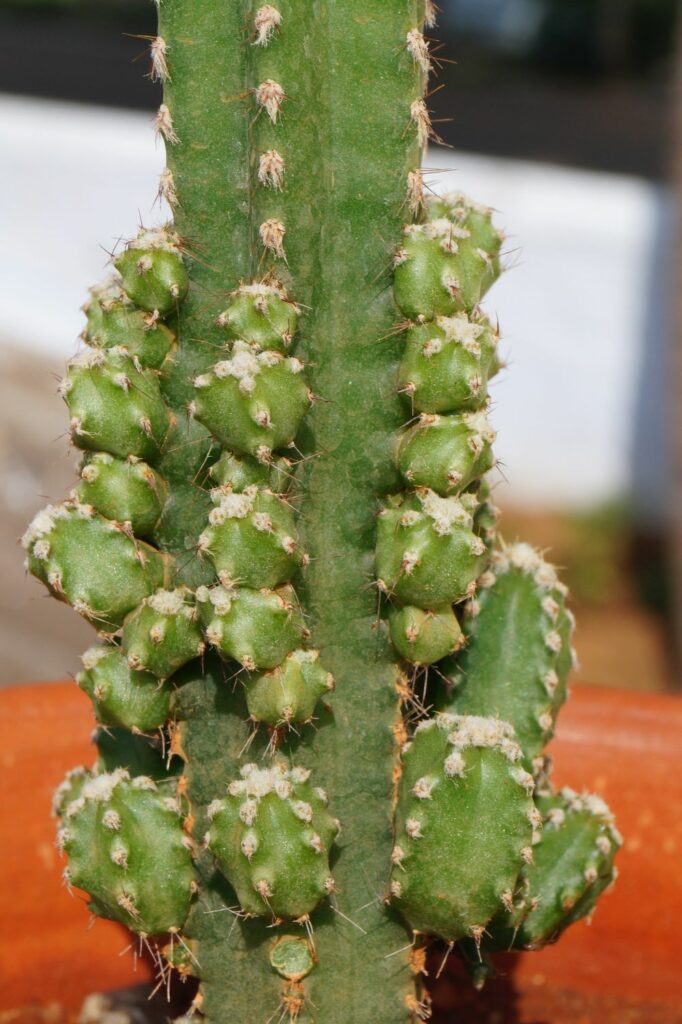 It’s much easier to propagate your Fairy Castle cactus using stem cuttings from the mother plant. You can also propagate using seeds that fall off from the fruits produced by this cultivar, but they take so much time to develop into mature plants. During the whole propagation exercise, you need to follow these steps more precisely if you choose to use stem cuttings:

What’s impressive about this succulent is that it’s not prone to any serious pests and diseases than other houseplants. You, however, need to avoid overwatering your fairy castle since that would make it suffer from dreadful bacterial and fungal diseases, which find drenched soil a perfect breeding spot.

Pests such as mealybugs and scale insects love to suck the sap from cacti plants’ leaves and stems. You’re less likely going to deal with fungus gnats and spider mites. Using the wrong pesticides to get rid of such bugs can cause a chemical reaction with the same effects as those of a sunburn on your Fairy Castle cactus.

This condition is referred to as phototoxicity, and it mostly occurs when the pesticide is used in the presence of bright sunlight. Keeping this houseplant indoors when there isn’t sufficient light not only prevents it from achieving its optimal growth but also starts to discolor or arch towards the direction of the sun.

To avoid root rot, always check the soil to make sure it’s not drenched for long hours. You also don’t want to leave your plant strapped for moisture, so leaving the soil completely dry for days isn’t advisable.

The fairy castle is a visually appealing plant that looks elegant on any corner of your living space. Such a succulent improves the interior architecture and carries a graceful appearance that you’d hardly find on other houseplants. It’s also used for air purification, so growing more of them would help get rid of toxins that are harmful to humans.