In our house, pom poms are an absolute crafting favourite. Whether you’re talking about the yarn kind that you can make yourself or the crafting store kind that you can embellish other projects with right out of the bag, we’ll enthusiastically use them all to make something bright and cheerful. That’s why we’re always on the lookout for more ideas and crafting tips that put pom poms of all kinds to good use!

Just in case you love the idea of crafting with pom poms just as much as we do, if not more, here are 15 of the very best ideas, designs, and tutorials that 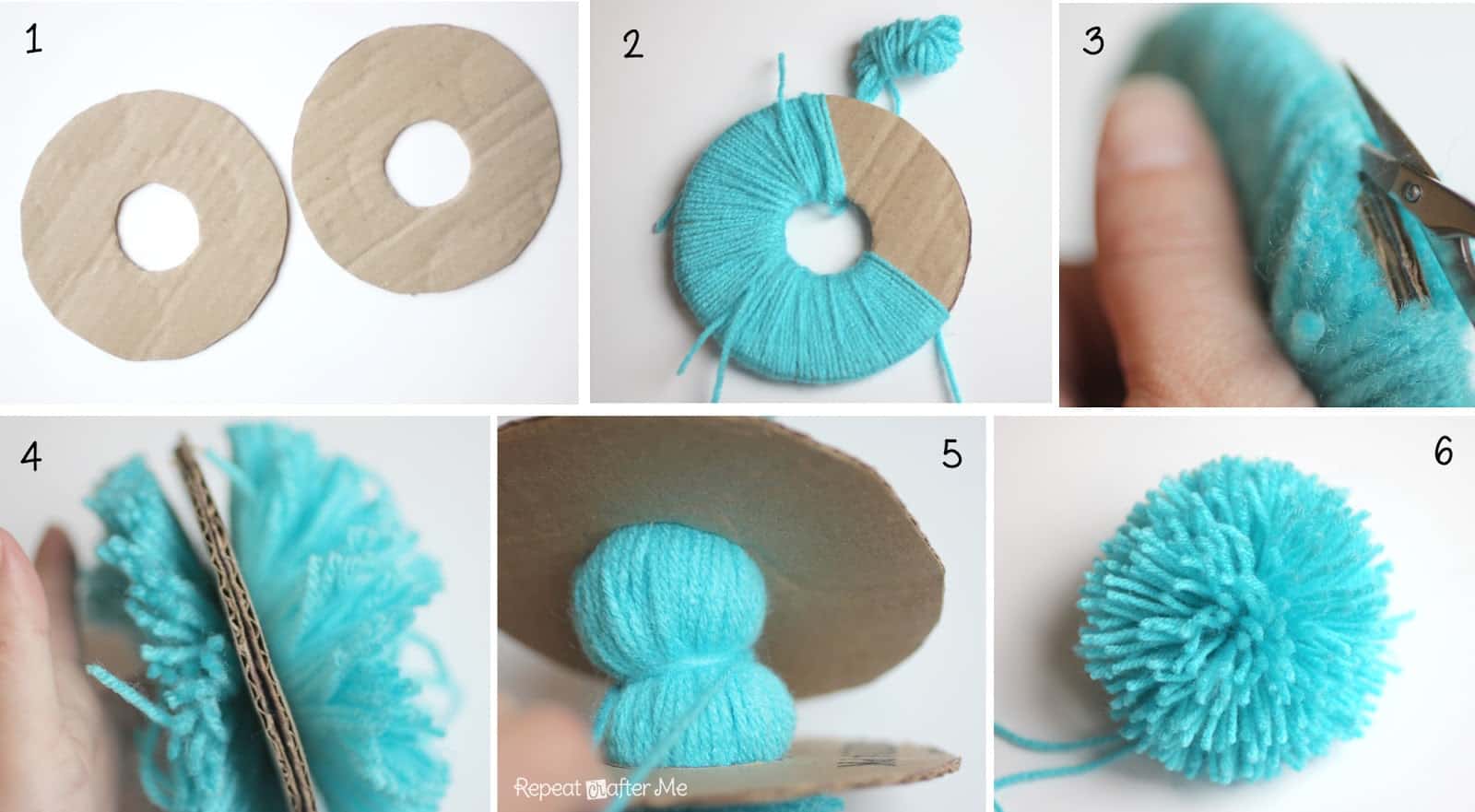 Just in case you’re new to the idea of crafting with pom poms and making them in general, here’s a very simple and classic way to make big, fluffy ones using a simple double layered circle cut from cardboard! Red Ted Art walks you step by step through the process of not only making the DIY “pom pom maker”, but also actually wrapping, tying, and completing your pom pom itself. 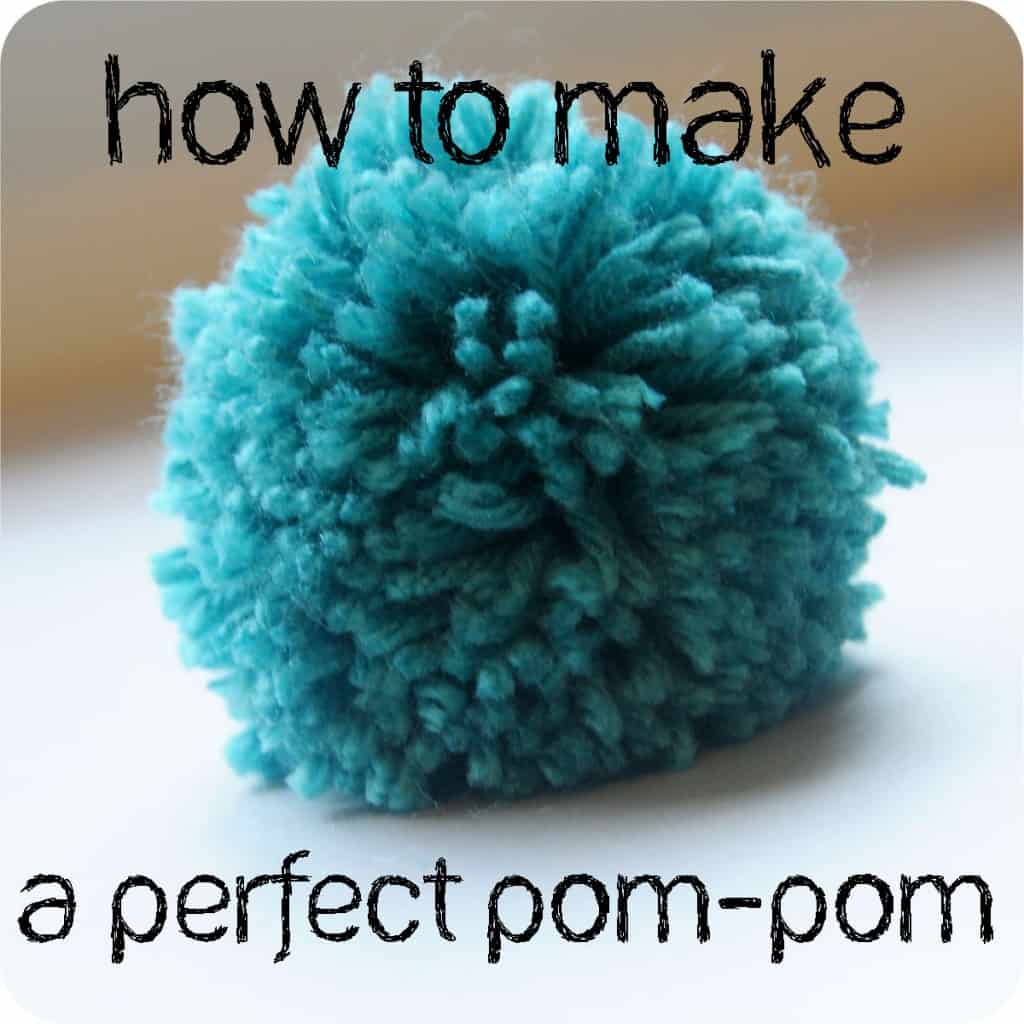 Are you very interested indeed in learning how to make your very own wrapped yarn pom poms like we showed you above but you’d prefer some tips for making ones that are much smaller, rather than just being huge and fluffy? In that case, we think you might get along a little better with this tutorial from The Nervous Knitter that shows you how to make your homemade yarn pom poms little on purpose. 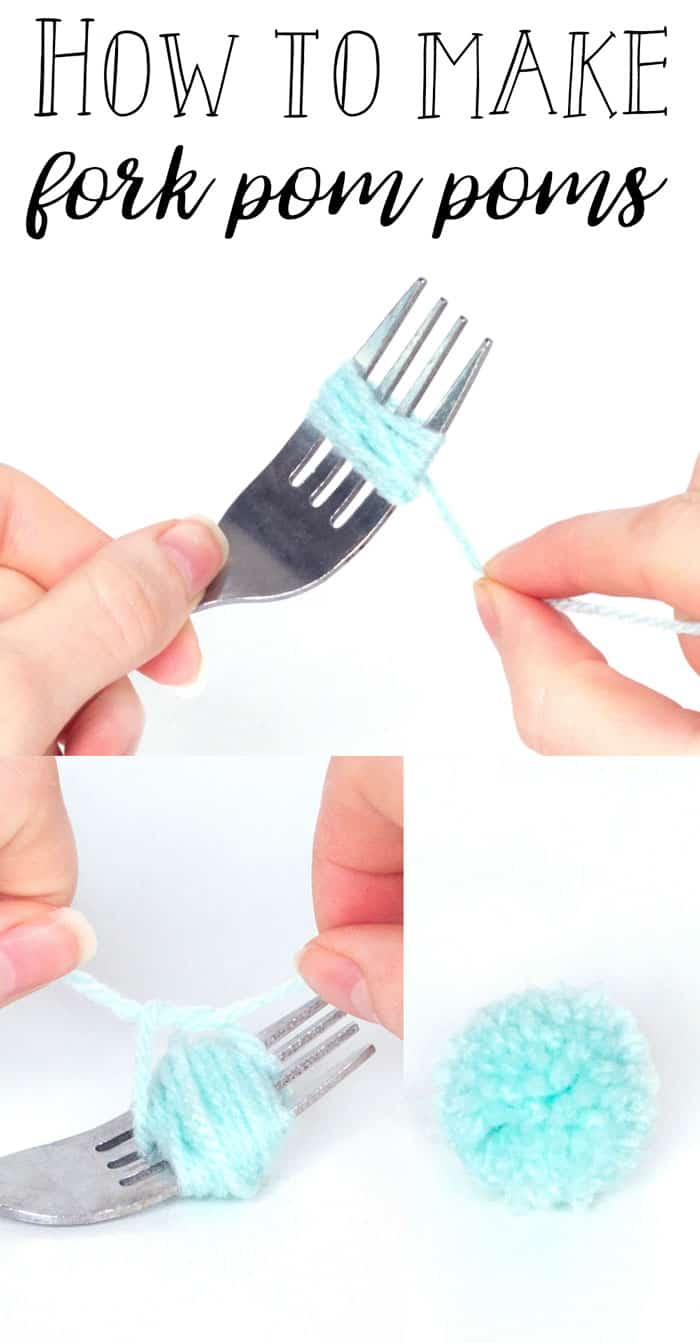 Are you interested in making small pom poms but you’ve always had a bit of trouble with the finicky details of making pom poms using the cardboard circles technique we’ve just shown you? Then grab a fork from the kitchen and check out how Doodle & Stitch made little pom poms around and between the prongs instead! We found this technique slightly easier to teach our kids, but it’s definitely more conducive to making smaller pom poms than big, fluffy ones. 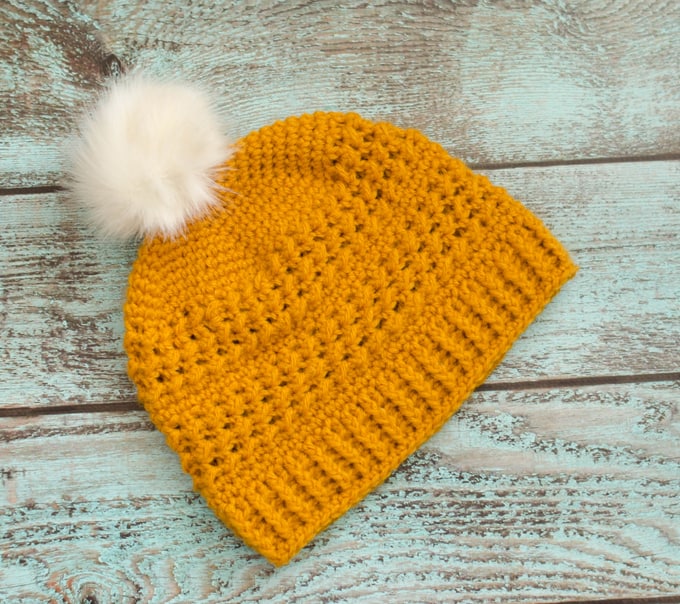 If you’re going to make a pom pom to add to something you’ve knit or crocheted, would you rather create one that’s made of faux fur instead of matching yarn, just to make it look a little more complete and perhaps store bought? In that case, we’d definitely suggest taking a look at how Crochet 365 made this surprisingly simple fur pom pom with a stuffed middle. We really appreciate that their tutorial even shows you how to sew it on nice and securely. 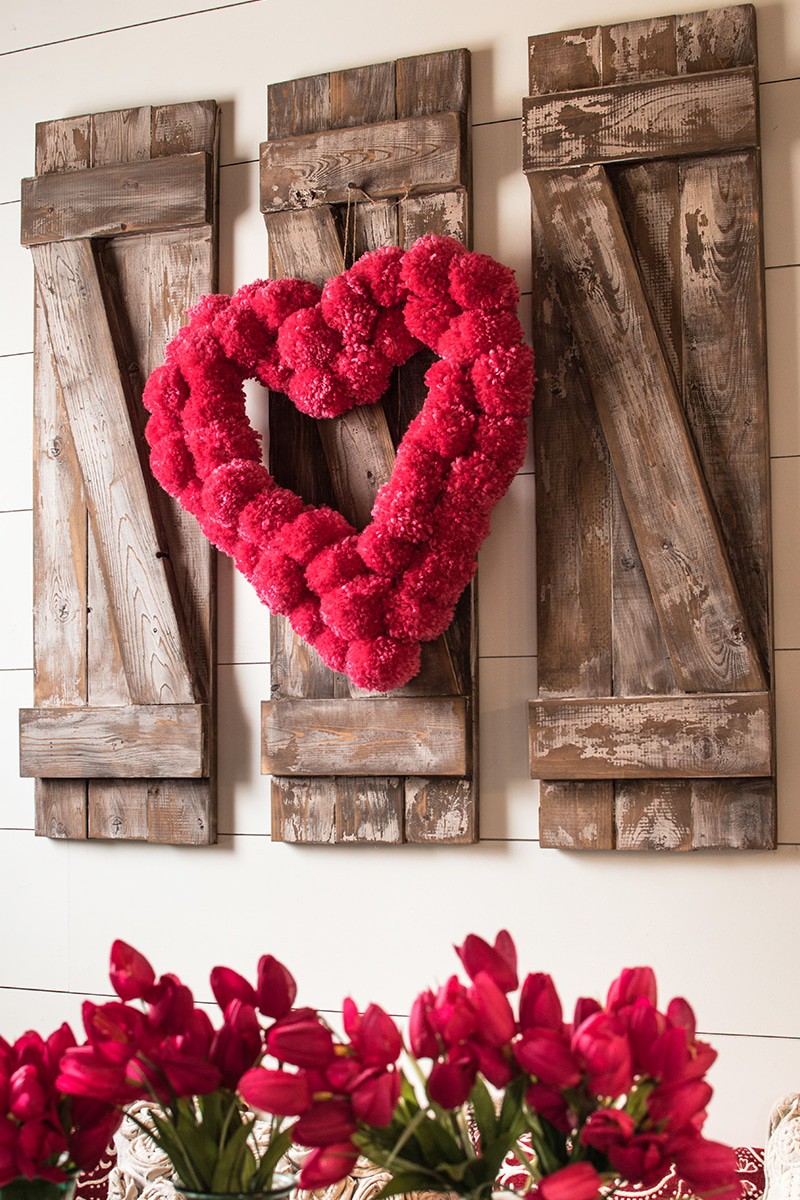 Of course, yarn projects and knitted wears aren’t the only things you can add pom poms to or use them for! Personally, we like making decor pieces of all kinds with them. That’s why we adored this heart shaped pom pom wreath from Little Yellow Wheelbarrow so much! Their tutorial shows you how they like to make their pom poms, as well as how they covered their base frame with them to get the right shape. 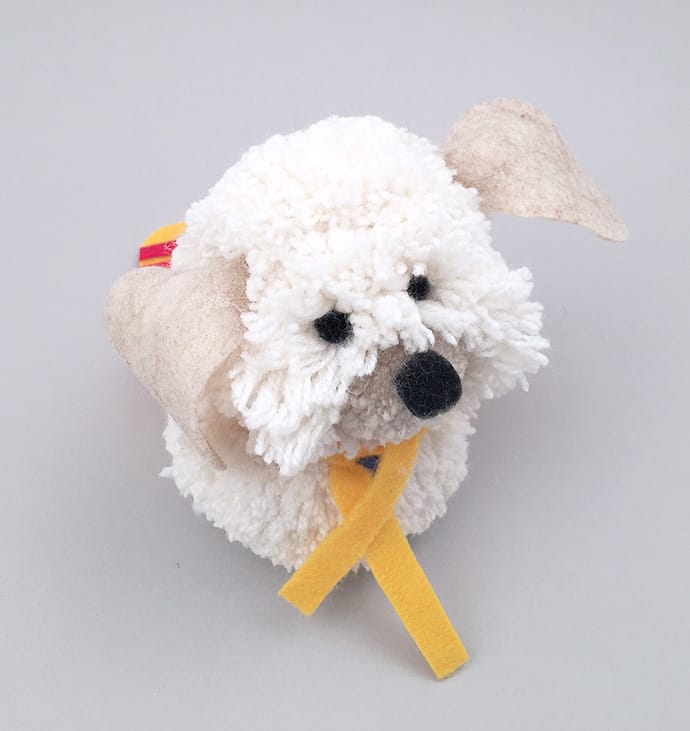 If you’ve never seen the way some people turn actual yarn pom poms themselves into little crafts and trinkets of their own then we’re sorry to tell you that you’ve been missing out on something really fun! Give it a try yourself in a nice, simple way by checking out how Handmade Charlotte created this adorable yarn pom pom dog using some careful embellishing techniques. 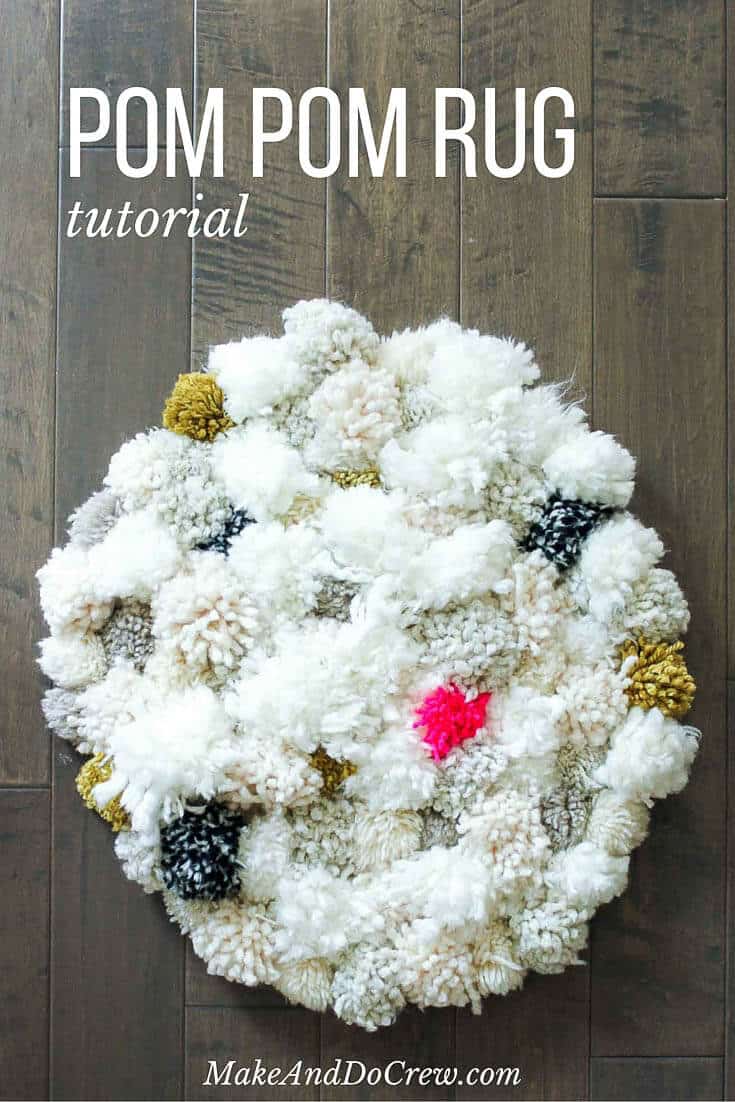 Have you always loved the soft, fluffy texture of pom poms so much that you actually kind of wish you could wrap yourself in them? Well, this fantastic pom pom rug might not let you do precisely that, per se, but it will let you bury your toes into the soft pom poms and wiggle them around in comfort! Check out how easily you can make one of your very own on Make and Do Crew. 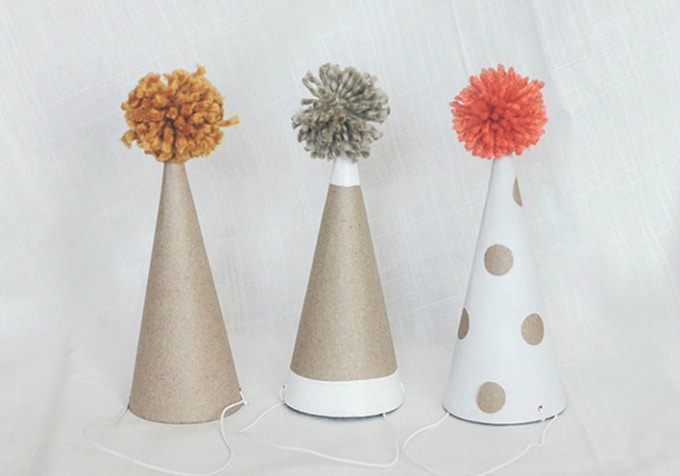 Are you the kind of pom pom lover who actually loves them so much that you like incorporating them into as many projects, events, and things in general as you possibly can? In that case, we think you just might be the perfect person to give this funny pom pom party hats a try! 100 Layer Cakelet is here to show you how they used simple yarn pom poms to add a friendly DIY feeling to their party accessories on special occasions. 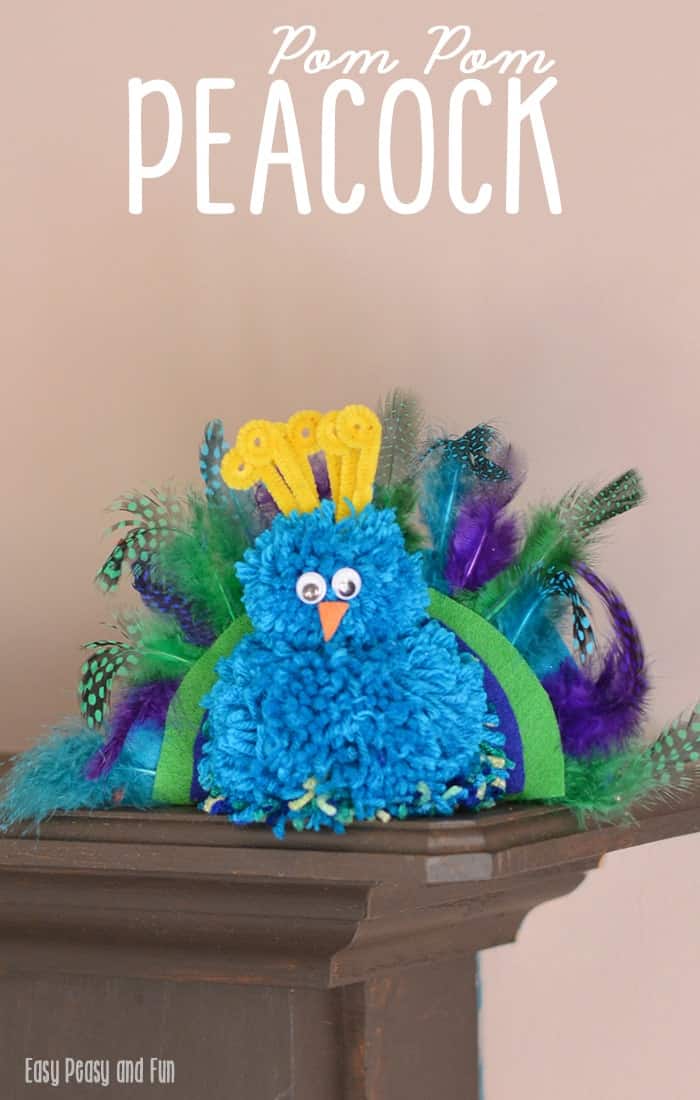 Were you actually really into the idea of making some kind of adorable little animal or character out of your pom poms but you also know that your kids prefer whatever craft has the most fun colours and textures so you’re still on the lookout for more ideas like that? Then we have a feeling this super bright and extra fun yarn pom pom and feathered peacock outlined on Easy Peasy and Fun might be right up your alley! We love the way they added even more detail using pipe cleaners too. 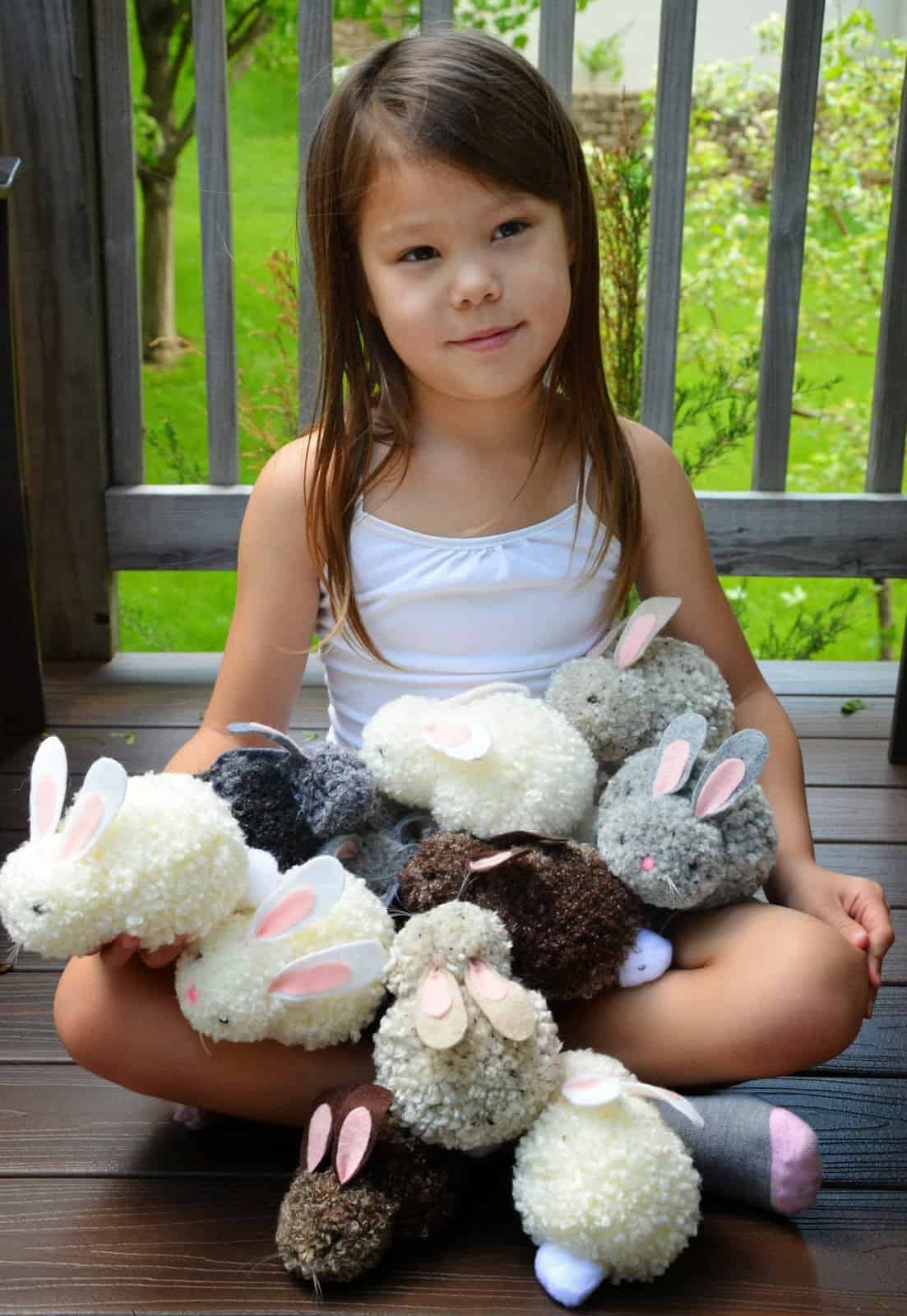 Are you actually still thinking as you scroll through our list about just how much you adore the idea of making little pom pom animals, and how you’d love to make as many different kinds as you can find with your kids? Then y0u just might be the perfect person to give these adorably fluffy pom pom bunnies outlined step by step on Creativities. We love that this craft uses both kinds of pom poms because the tails are made from the store bought crafting kind! 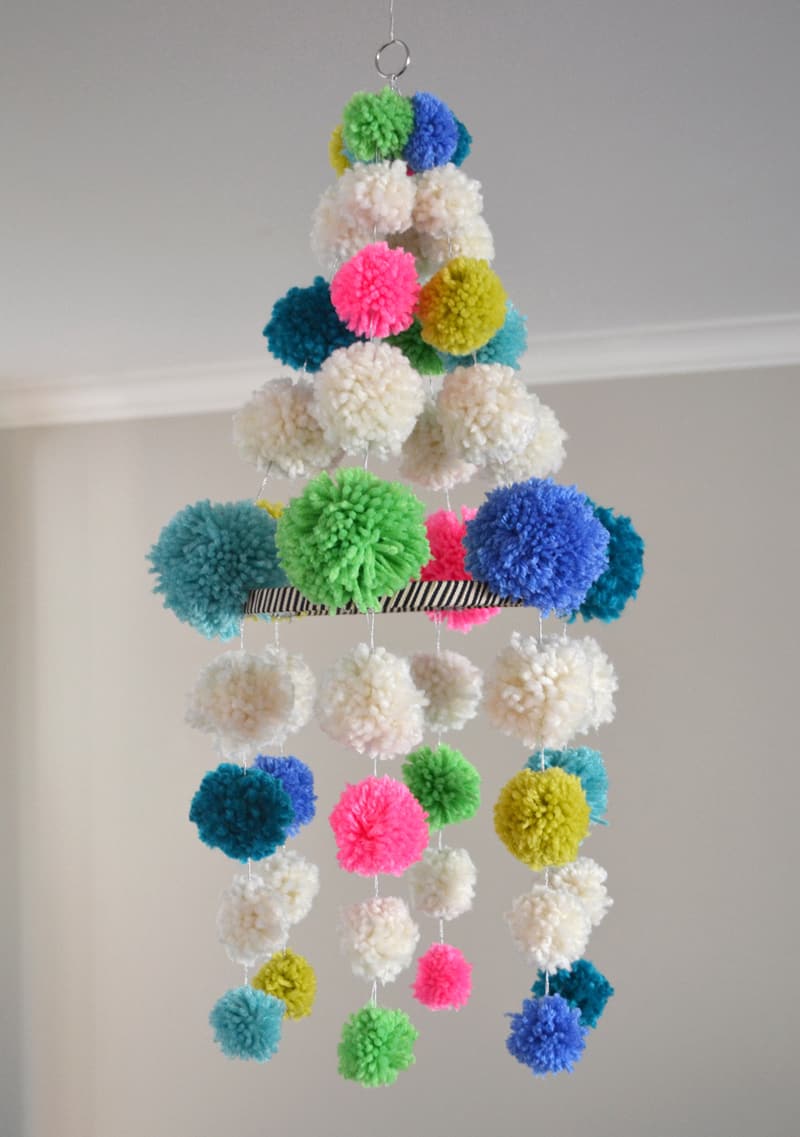 Are you actually such a fan of pom poms that you’ve been trying to think of ways to incorporate them into your actual decor scheme, or perhaps the scheme in your kids’ rooms? Then we think you’ll really appreciate the way Art Bar made these fantastic brightly coloured pom poms of all different sizes into a neat, eclectic hanging mobile! Their tutorial shows you how to make it happen using an embroidery hoop as the base.

Yarn and fur aren’t the only things you can make pom poms with! We’re completely in love with the way The Crafty Blog Stalker outlines steps for not only making awesome fringy pom poms out of strips of scrap fabric, but also for attaching those pom poms onto the end of a pen for a slightly more interesting note writing experience. 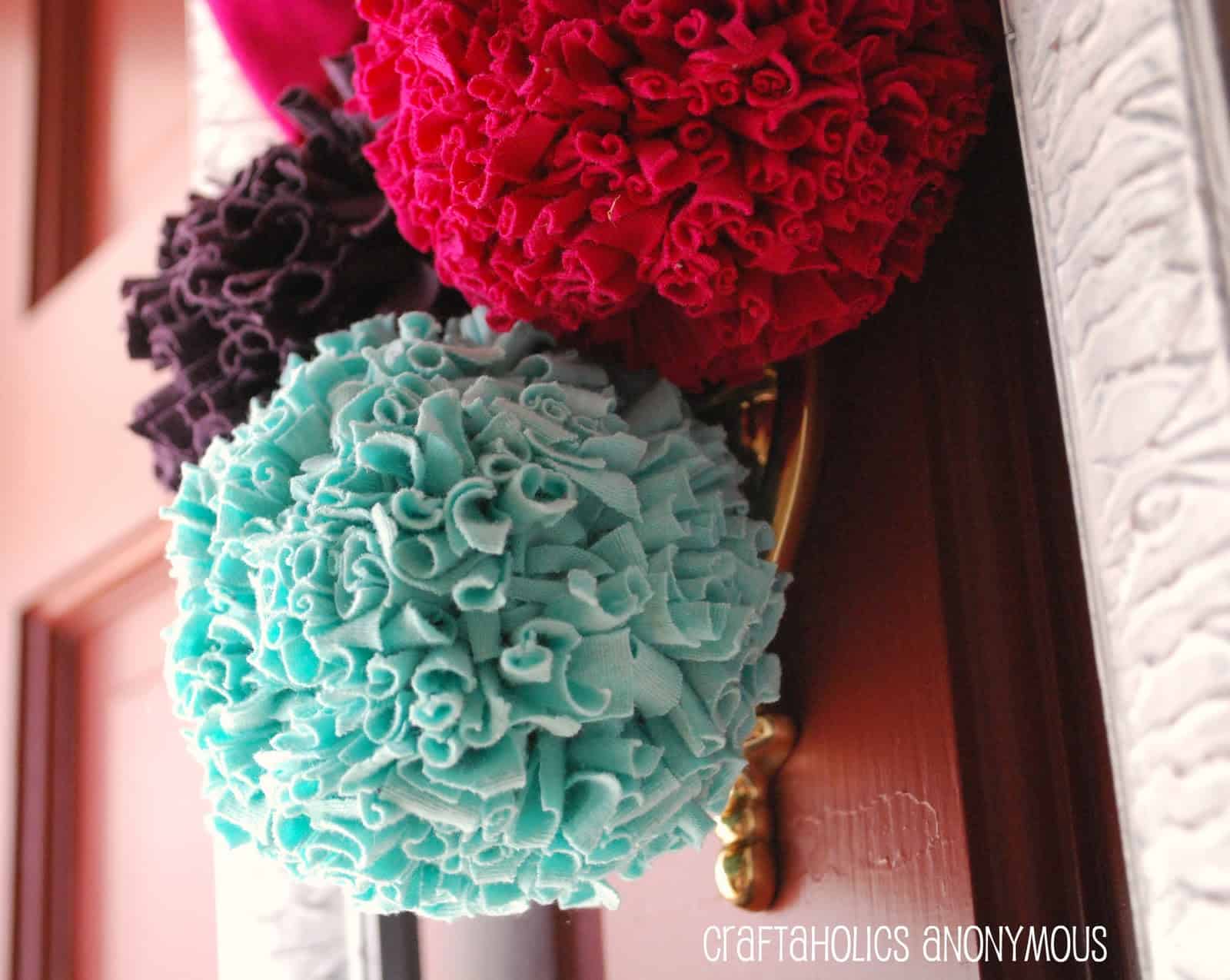 Are you actually feeling quite intrigued indeed by the idea of making pom poms from stripped material but you don’t have a lot of scrap fabric to work with right now? Then we’d suggest reaching into your old clothing bin instead and pulling out a t-shirt that you don’t mind cutting up! We love the way Craftaholics Anonymous made these t-shirt pom poms because they’re a little bit bigger than the average yarn type and the way the strips curl gives them a sort of ruffled quality around the outside.

14. How to make pom poms in bulk for crafts 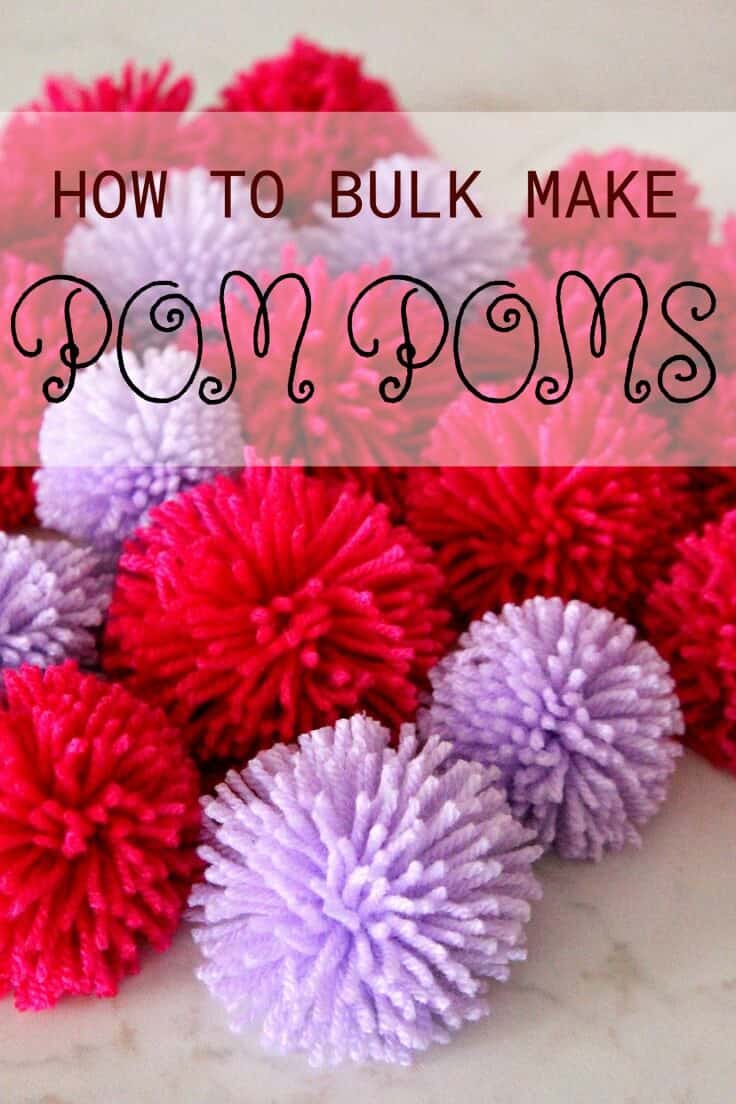 Are you actually in search of a much simpler way than usual to make pom poms because you have a slightly larger project in mind and you’re looking for a way to create lots of them quicker and more easily than some of the techniques you’ve seen here would allow for? In that case, we’d definitely suggest taking a look at how Easy Peasy Creative got a little crafty in order to make several pom poms in bulk, rather than slowly and one at a time! 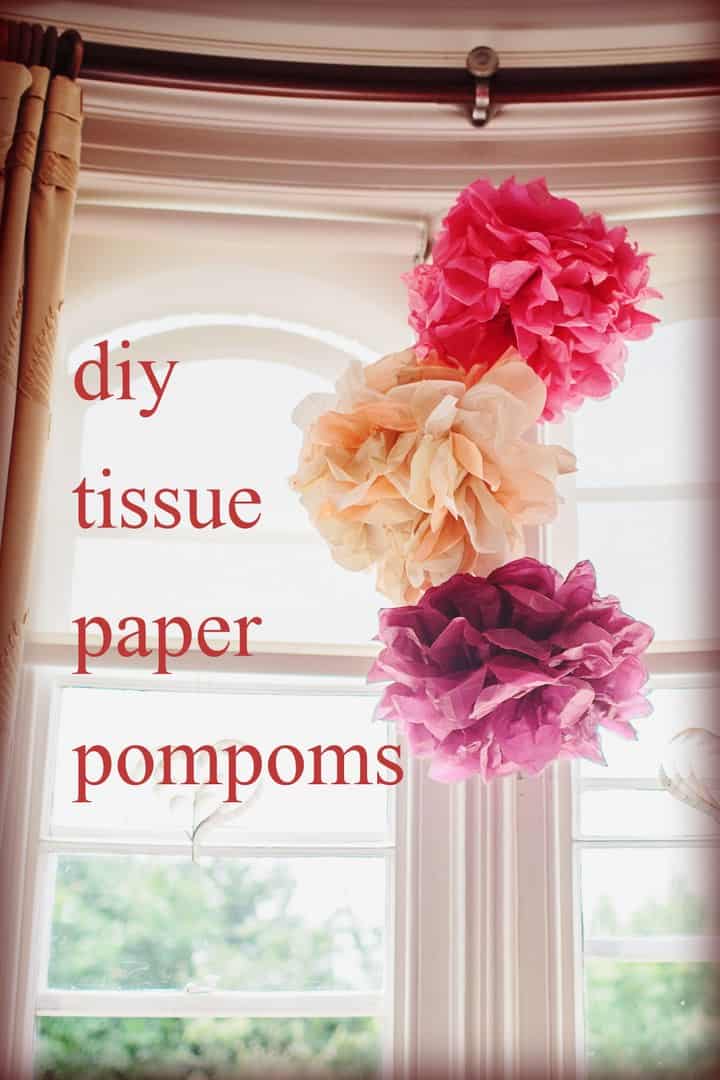 Just in case you’re actually still feeling curious about whether there are other kinds of materials you can make awesome, decorative pom poms from, here’s one more alternative for your consideration before we go! Check out how Project Nursery made these floral looking pom poms carefully from strips of tissue paper.

Have you made other awesome pom pom crafts that you and your kids really enjoyed doing together but that you don’t see here on our list? Tell us all about what you created and how you did it or link us to photos of your finished work in the comments section! 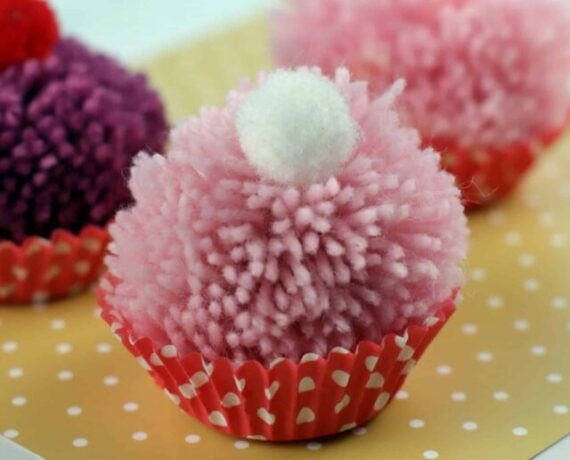 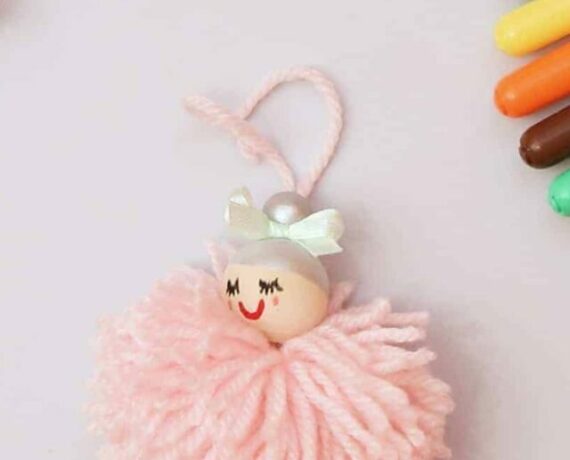 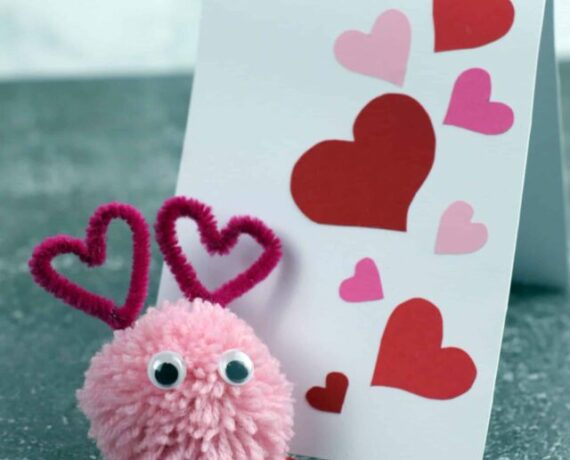