We’ve always been huge fans of nail art. Ever since we were little kids, we’ve had a wide array of decals and nail stickers and a large collection of polishes that has always impressed our friends. We used to paint each finger a different colour, add sparkles, and create all kinds of simple image designs on our friends’ fingernails with toothpicks. Since then, we’ve advanced our love of nail design and we’ve also advanced our skills and the tools we own and use to create wonderfully attention grabbing manicures. Now, because we want the manicures to last and our real nails aren’t very strong, we often create our fanciest designs on acrylic nails that we can glue to our real ones and then either maintain or remove after a night out, as you see fit. We also find that wearing acrylic nails stops us from biting our real ones!

You can certainly buy premade acrylic sets or get gel acrylics done at any clean, good quality salon, but where’s the fun in spend more money when you could save a few dollars and make your own? We love having the power to customize what we wear according to colour and design ourselves! Just in case you’re on that same page, here are 15 awesome DIY acrylic nail tutorials and inspirations that we’ve actually modeled our own manicures after before and adored the final results. 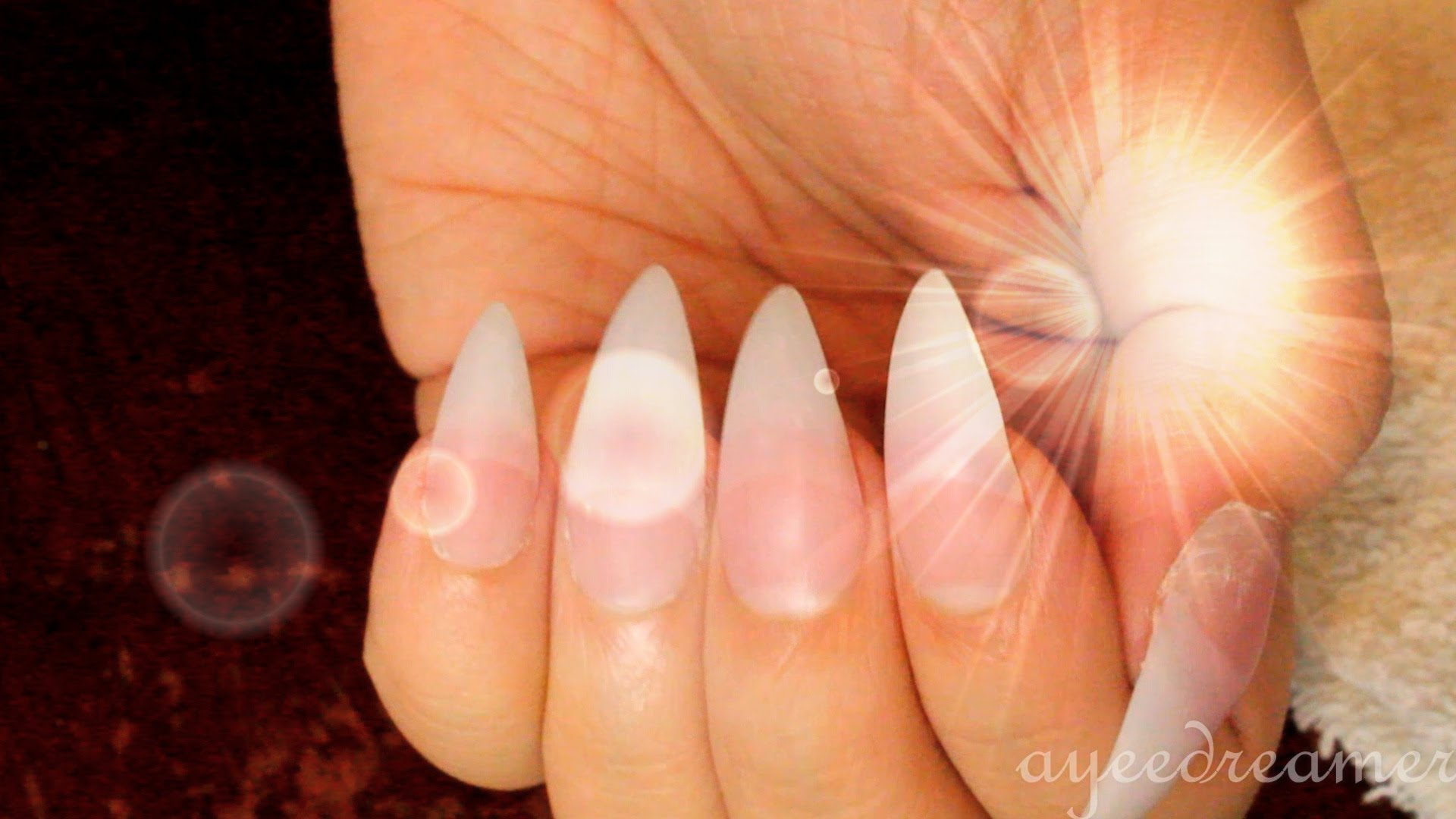 Just because you’re working with acrylic nails that have the potential to be coloured, bedazzled, and generally embellished doesn’t mean you have to create a bright, complicated look. Some people just want their fingers to look as though they’ve grown healthy, strong natural nails in the shape they prefer. Rounded and squared off nails are nice, but if you as us, the nail shape that’s the most fun to wear is the almond, or even the more pointed stiletto. That way, if you’re keeping the design to a lovely neutral French manicure, the shape still injects a bit of style to the look, particularly since almond nails are all the rage right now. ayeeDreamer guides you through the process of shaping a set like the ones you see above. 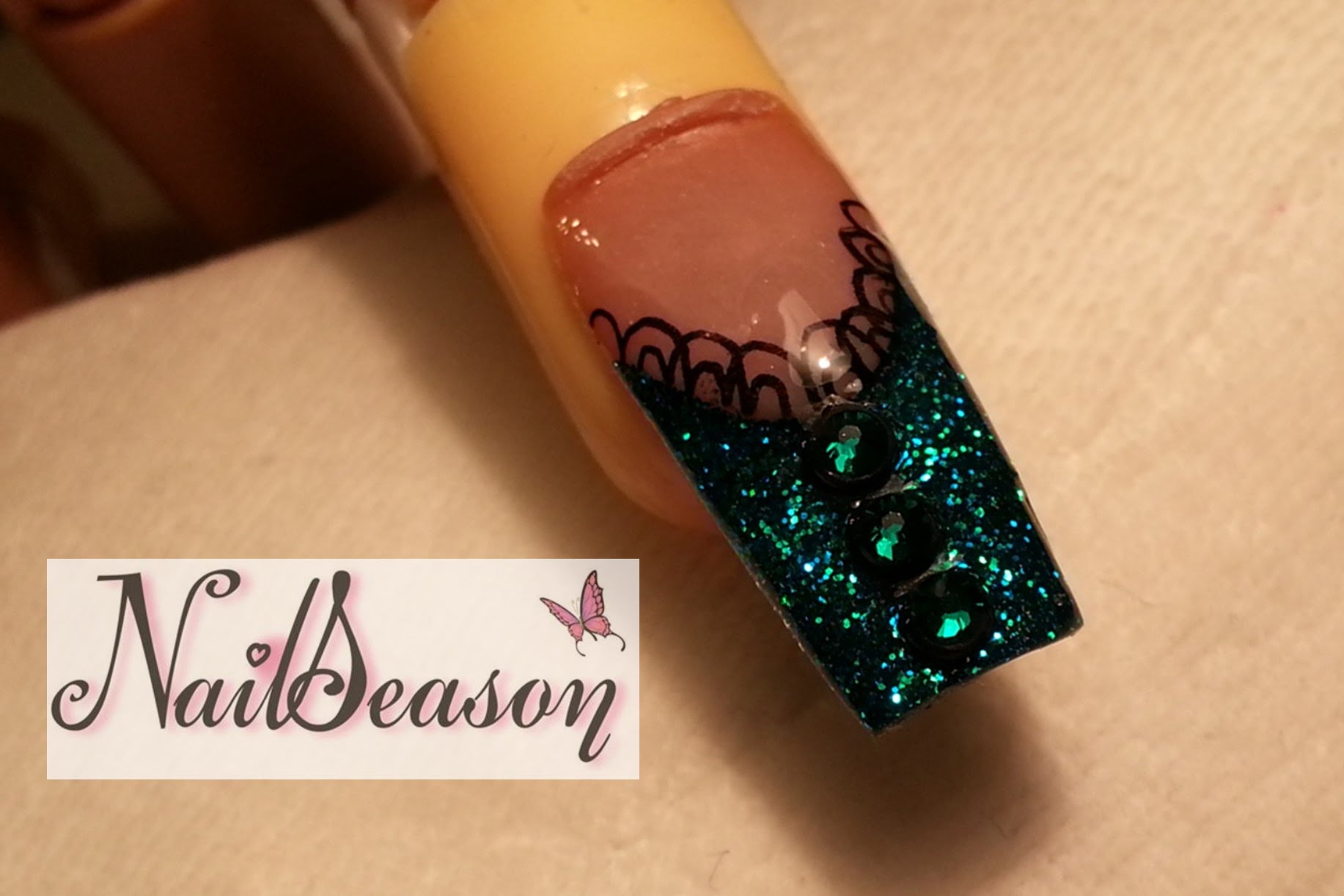 Is your personal style a little bit more flashy and you’d actually prefer something even more trendy than the almond or stiletto nails we showed you above? In that case, maybe coffin end nails are more your style when it comes to shape! The beginning process of creating this kind of manicure is much the same as the previous tutorial showed you, only you’ll cut the tip off bluntly at the end. Then consider adding some sparkled, lace decals, and rhinestones, just like Nail Season did here! We can’t get over how awesomely eye catching this look is. 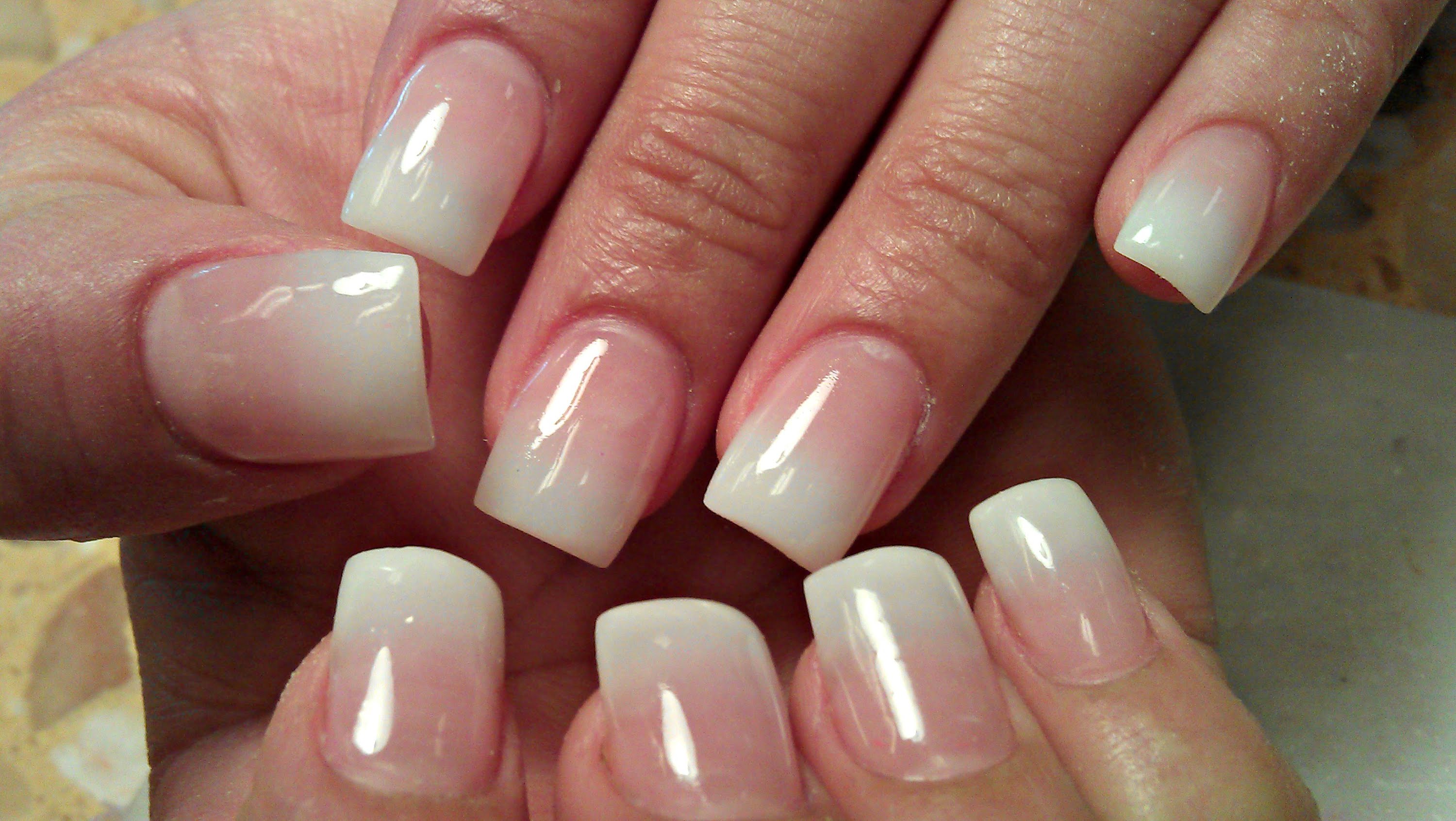 Do you love the idea of giving yourself a natural manicure like the French one we showed you first on this list, but you’ve actually never really been a fan of the way the white tip has a solid line that delineates it from the rest of the manicure in the French style? Well, Easy Nail Tutorials is here to show you how to create a similarly pretty neutral effect but with a softer finish! They’ve let their ombre fade down from the tips into their neutral pink in a subtle, beautiful way. 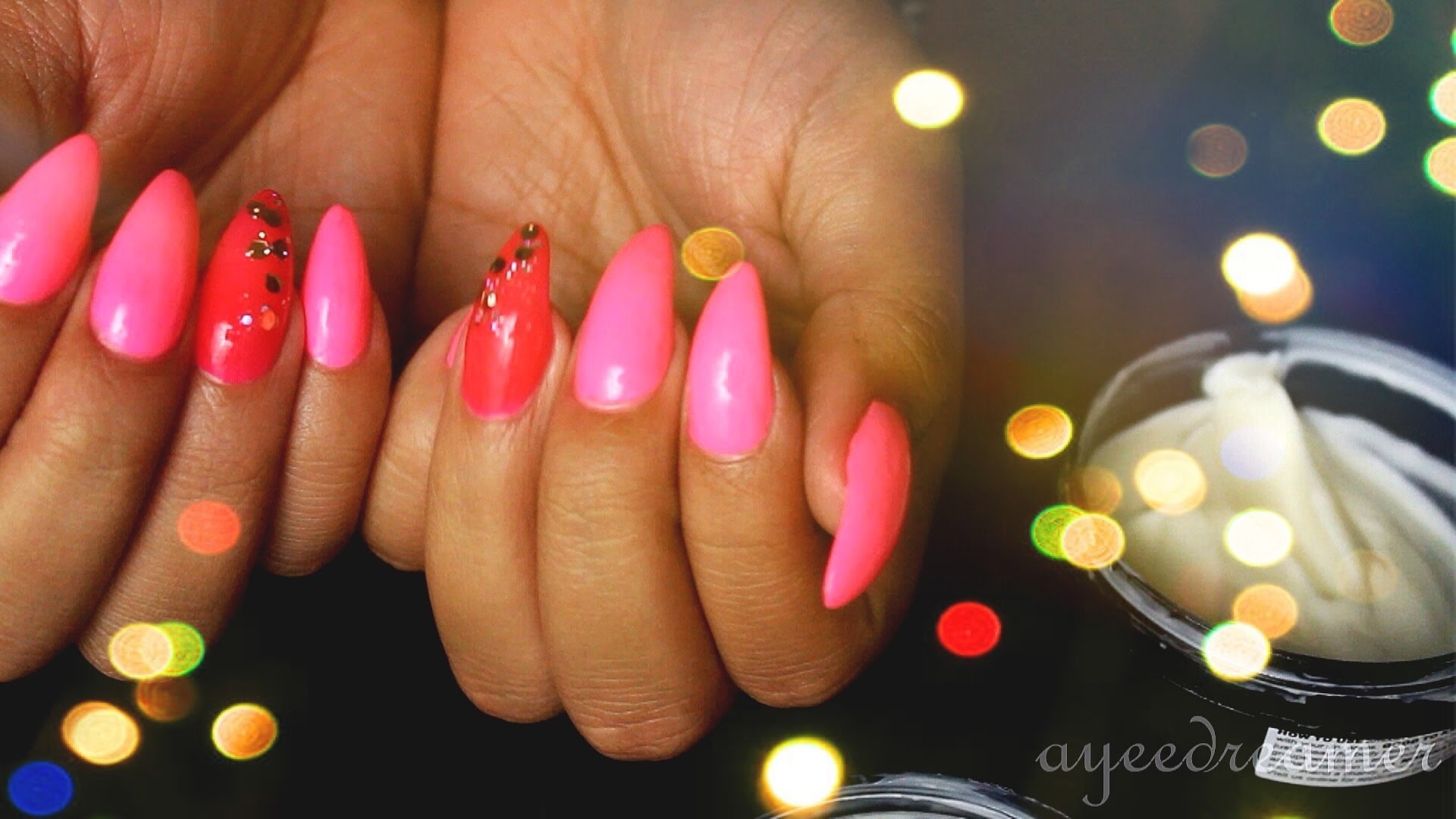 Perhaps you’re totally sold on the idea of making yourself a stiletto nail shape but you’d rather create something a little flashier than the classic French manicure paint job we showed you on the previous ones? In that case, pink lovers will adore this brightly painted and rhinestoned set from ayeeDreamer! We love the way they created an accent nail that stands out in not just one but two ways, by painting it a darker pink and also adding a couple gems. We think the basic concept of this style would look pretty cute no matter what colour you choose to work with!

5. Mock acrylic nails on a budget 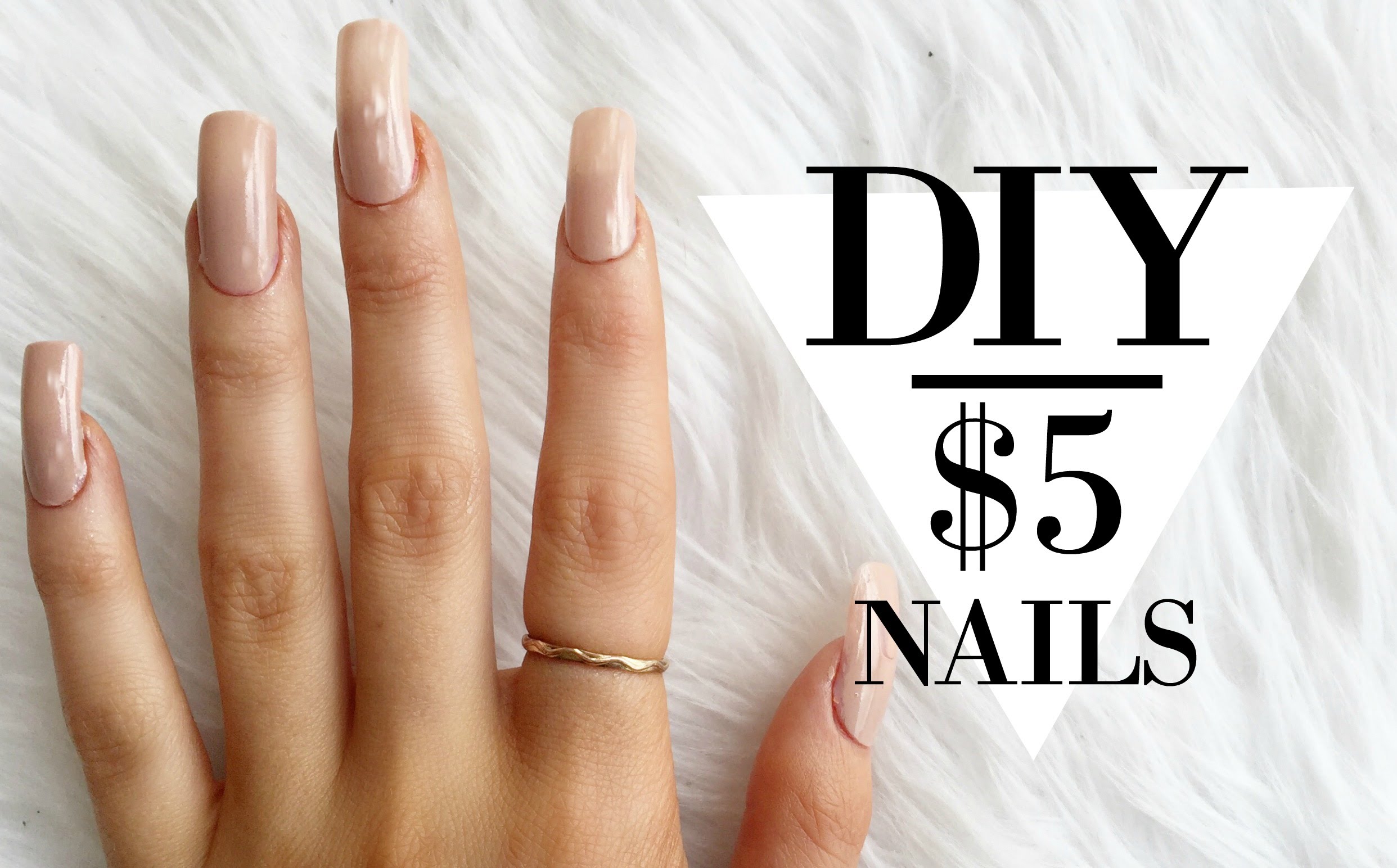 Are you a huge fan of the way a professionally done set of acrylic nails from the salon looks but you’re just not prepared to pay to have a full set done right now? In that case, you’re going to love how Emily Farmer used safe but discount nail supplies to make a DIY set of impressively long squared off nails that look just like the style you might request in a salon. They’ve stuck to a subtly glamorous nude colour and a solid paint style, which contrasts the attention grabbing shape well for a bit of pretty balance. 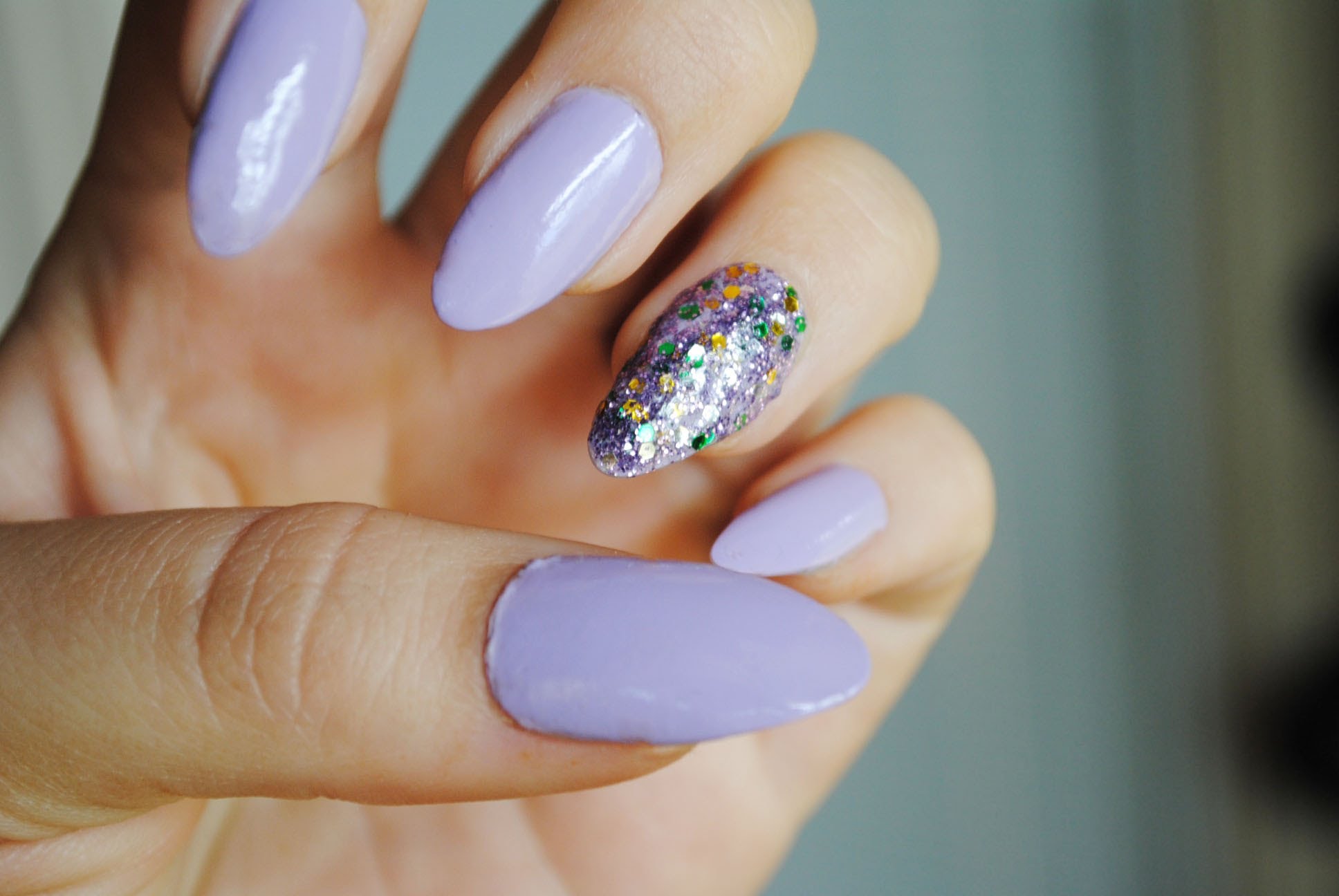 Are you completely in love with the stiletto nail idea but you’re just not sure you could do your makeup properly or type easily at work with nails as long as the pointed manicures we’ve shown you so far? In that case, we have a feeling you’re going to love this tutorial from Tanfastic Nails that teaches you how to create the same shape but smaller and more realistic for hands-on jobs! They might be a little less extravagant looking, but that’s nothing a lovely purple accent nail can’t help with. 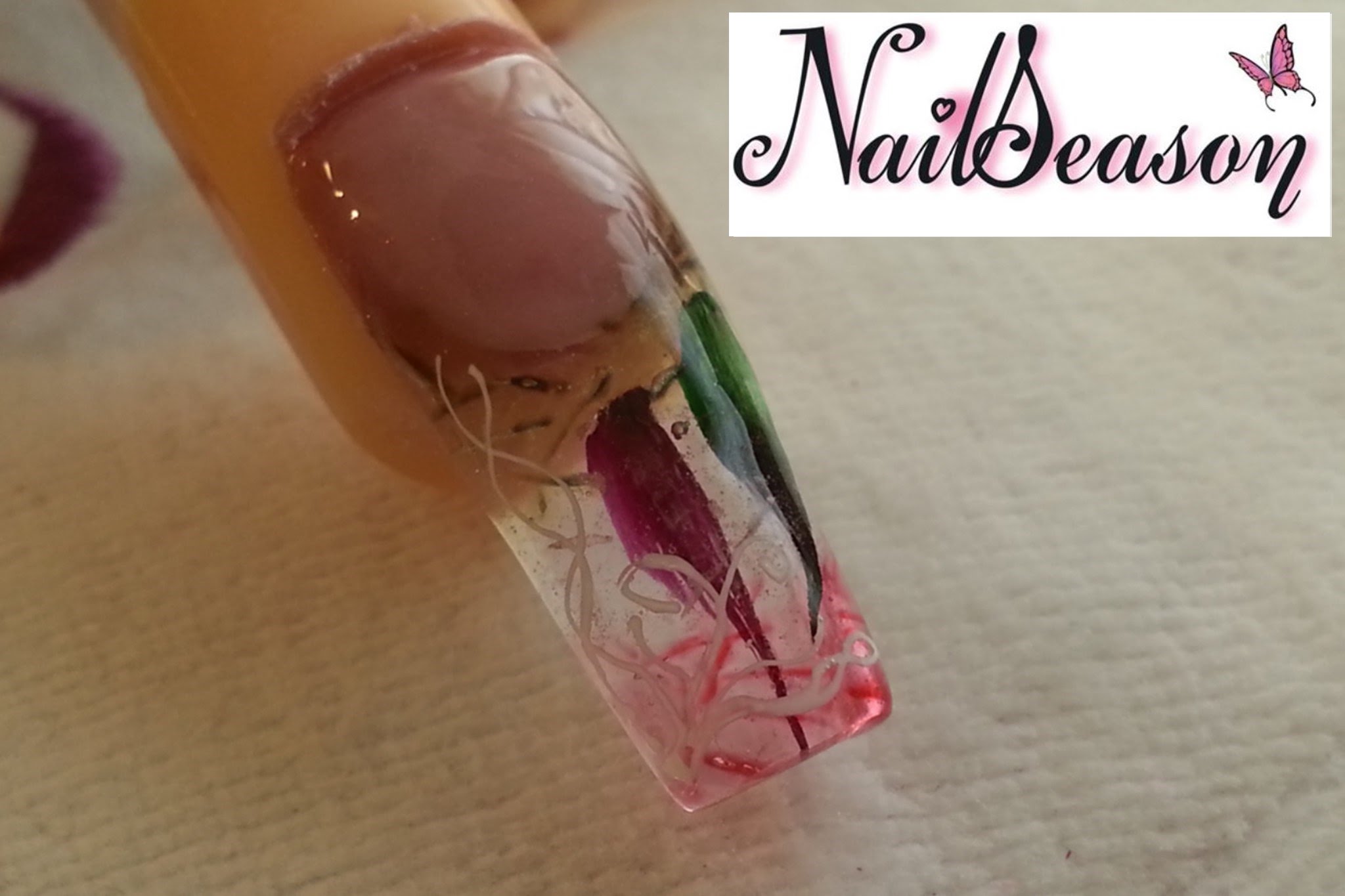 Are you actually a little bit more experienced with nail art and working with professional manicure supplies, so you have a license for working with clear acrylic gels? In that case, here’s a super unique look that will drive your friends wild and have them all requesting appointments! Nail Season guides you through the process of encasing things like feathers, faux flower petals, glitter, and so forth inside a thick layer of clear acrylic so that the pieces look like they’ve been frozen in ice. Rather than painting over the acrylic with white like you would with a manicure, leave the look clear so that full effect shows through! 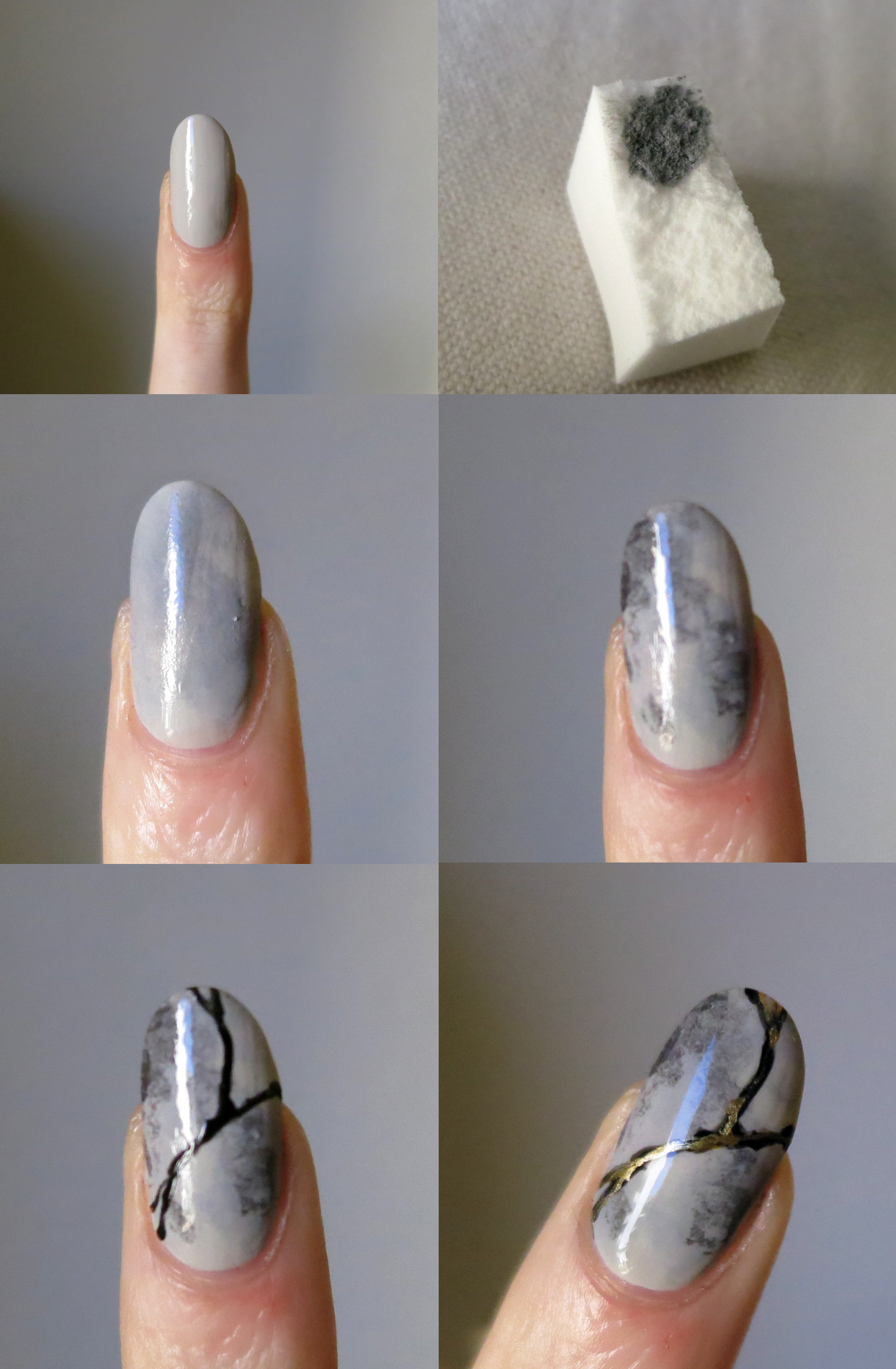 You’ve probably seen water marbling nail techniques outlined in Internet tutorials before and, while that’s a totally awesome manicure visually and a look that’s super fun to create, it doesn’t often end up looking like actual marble. The process of making your manicure resemble the stunning marble counter tops that made you feel inspired is a little bit different and almost a little bit easier, as long as you follow the steps outlined on J-Jo Cosplay! This design takes a few different tools and some attention to detail, but there’s no water involved, so it’s less messy at cleanup time! 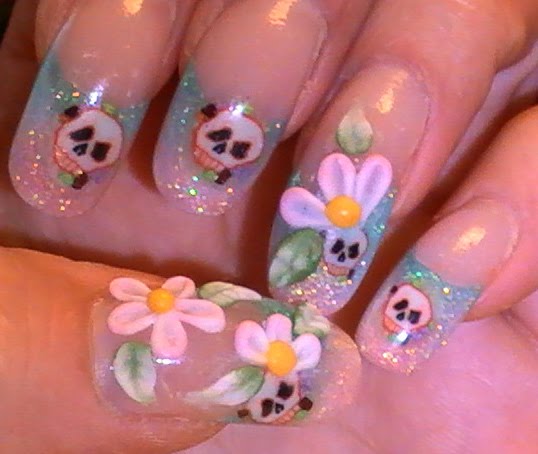 Are you completely find with the process of creating or gluing on the acrylic nails themselves but you’re intent on creating some really unique looking designs on top and you could use some inspiration? Well, here’s an awesome effect that you might not see around too commonly! Besides showing you an awesomely sparkly floral skull design, SCSnails also guides you through the steps for carefully building product that you can shape into 3D visuals, just like they’ve done here with their flower petals and leaves. 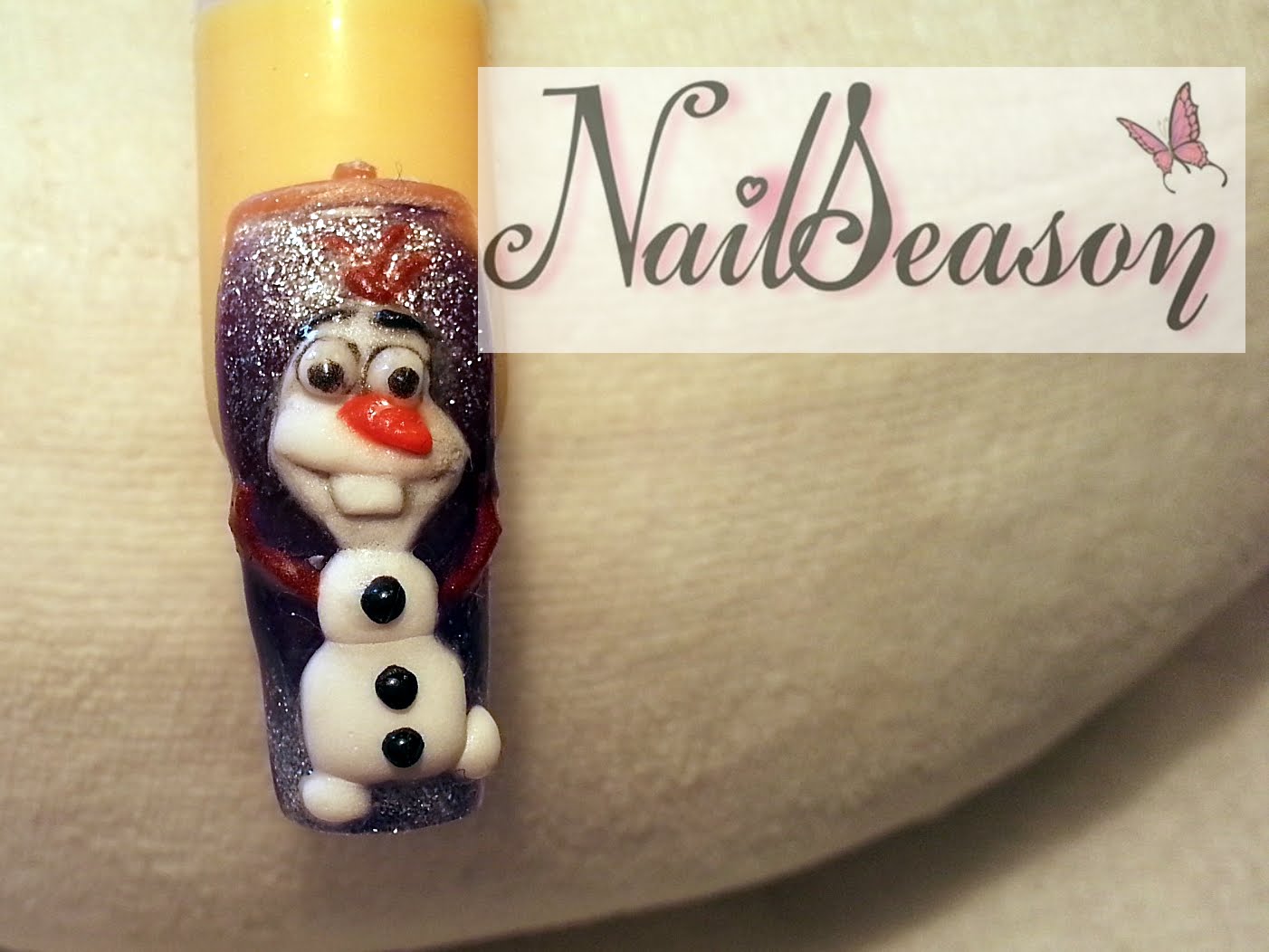 Are you completely enthralled with the idea of creating a 3D manicure like the one we showed you above but your personal tastes are actually a little more fun, silly, and cartoon inspired? Perhaps you’re already collecting nail art inspiration ideas for winter because you’re obsessed with seasonal décor and accessorizing. Well, we can’t say we blame you and we’ve actually been doing the same thing! That’s how we found this hilarious little 3D nail art snowman design from Nail Season. This manicure will certainly get the little kids in your life excited, because the snowman is actually modeled to look like Olaf from the Disney movie Frozen. 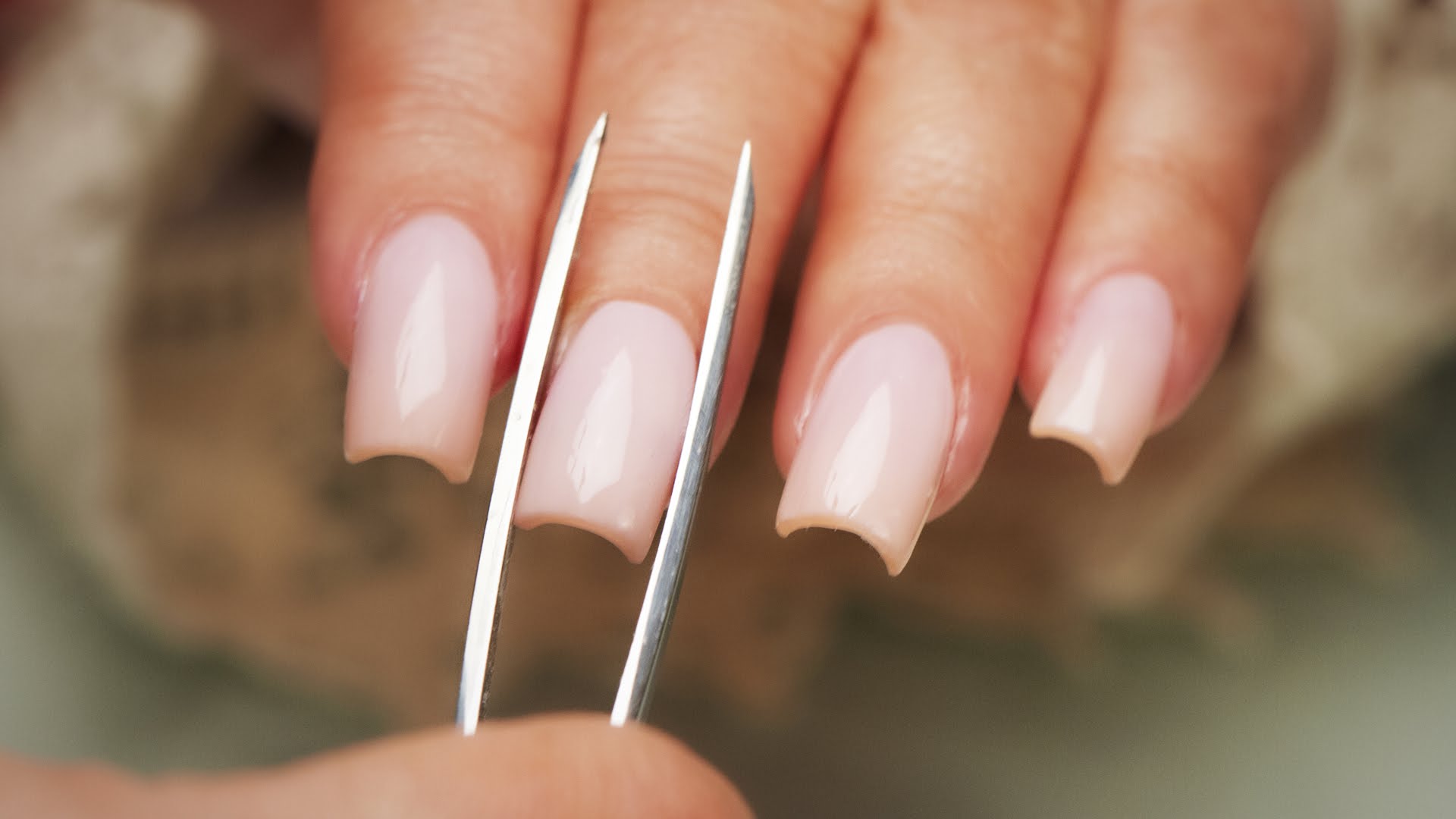 We’ve shown you a couple of squared off nail designs already, but most of those manicures suggested getting the look by working with an acrylic nail base that was already square in shape. Just in case you prefer to create your own nail shapes from scratch whenever possible, here’s a tutorial from Nail Career Education that gives you some tips and tricks for getting that perfect squared off look in a neat, even way. 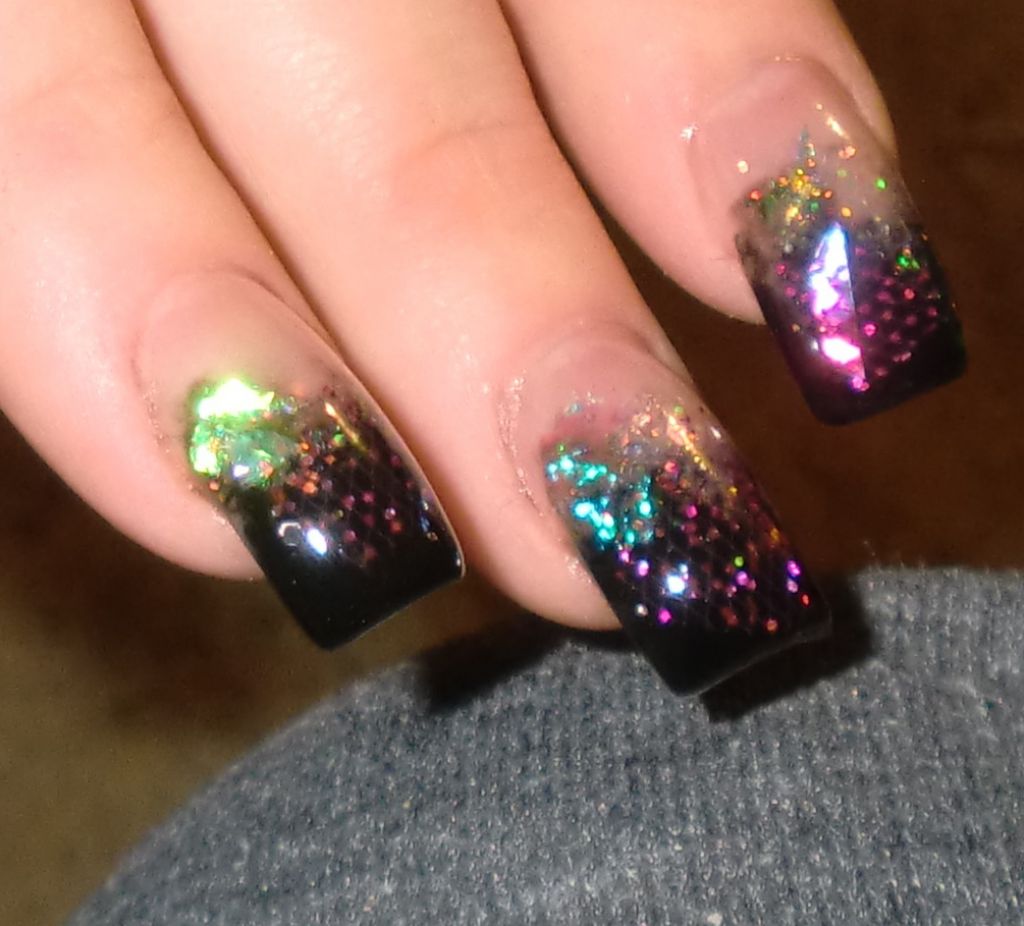 Now that you know how to make a squared off look and you’ve also seen tutorials on working with glitter, are you thinking about how cool it would look to combine the two ideas? We certainly think it’s a neat style! You might be able to simply work with each technique and put them together into one manicure yourself based on what you’ve seen so far but just in case you need more specific instructions, here’s an actual tutorial for this awesome gel encased glitter manicure on a square set. Get the instructions from My Makeup DIY. 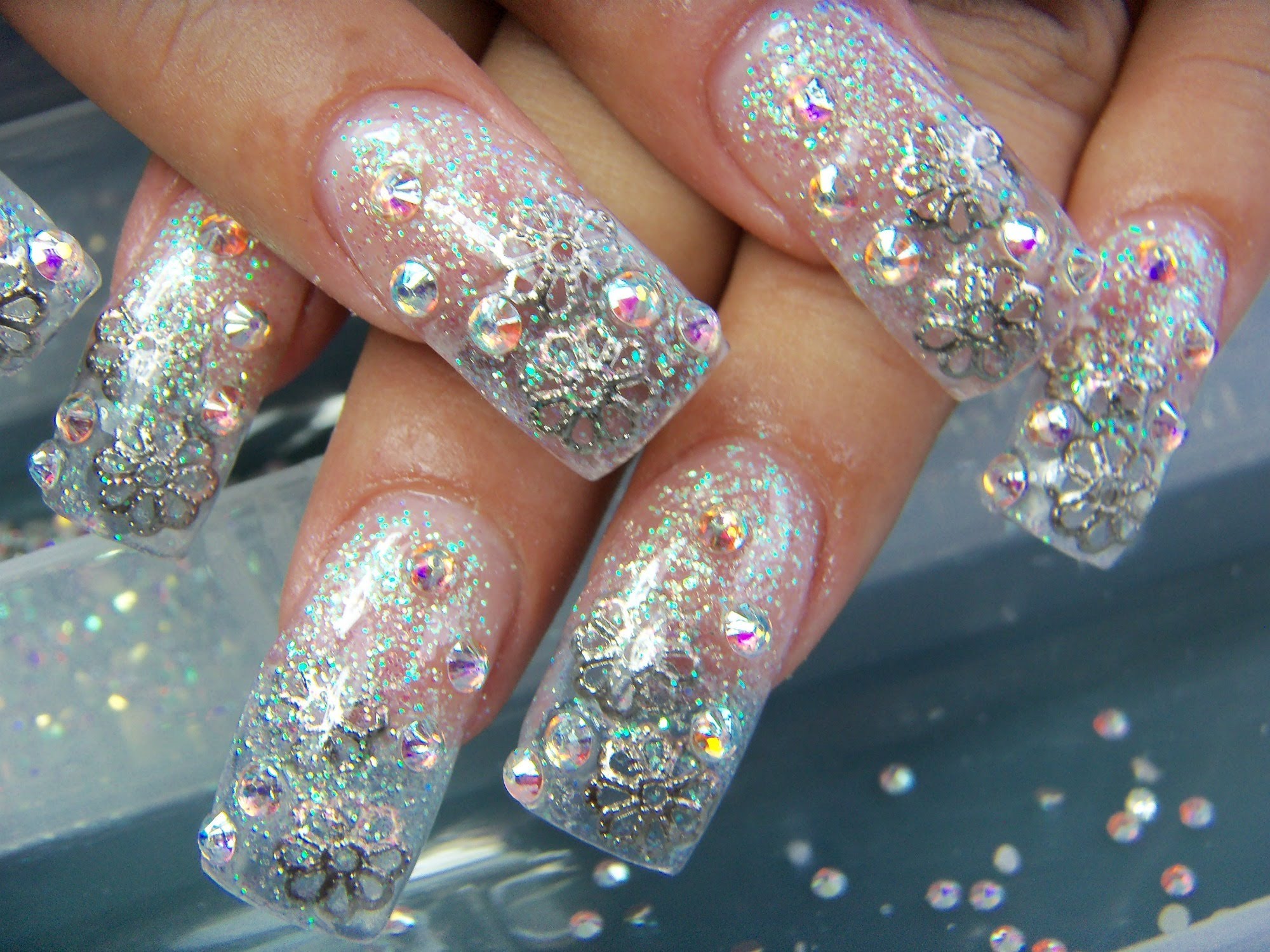 We’ve talked a lot about many different embellishment techniques by this point and most of the manicures you’ve seen have picked and chosen in terms of which ones they incorporate to make a particular look. What if your personal style, however, is really glamorous and wild and you don’t want to choose between them? Well, Nail Art Designs is on the same page as you, as you can tell from this awesome sparkled, rhinestoned, and decaled look! Sometimes there’s nothing wrong with doing everything in one place as long as you are pleased with the outcome. 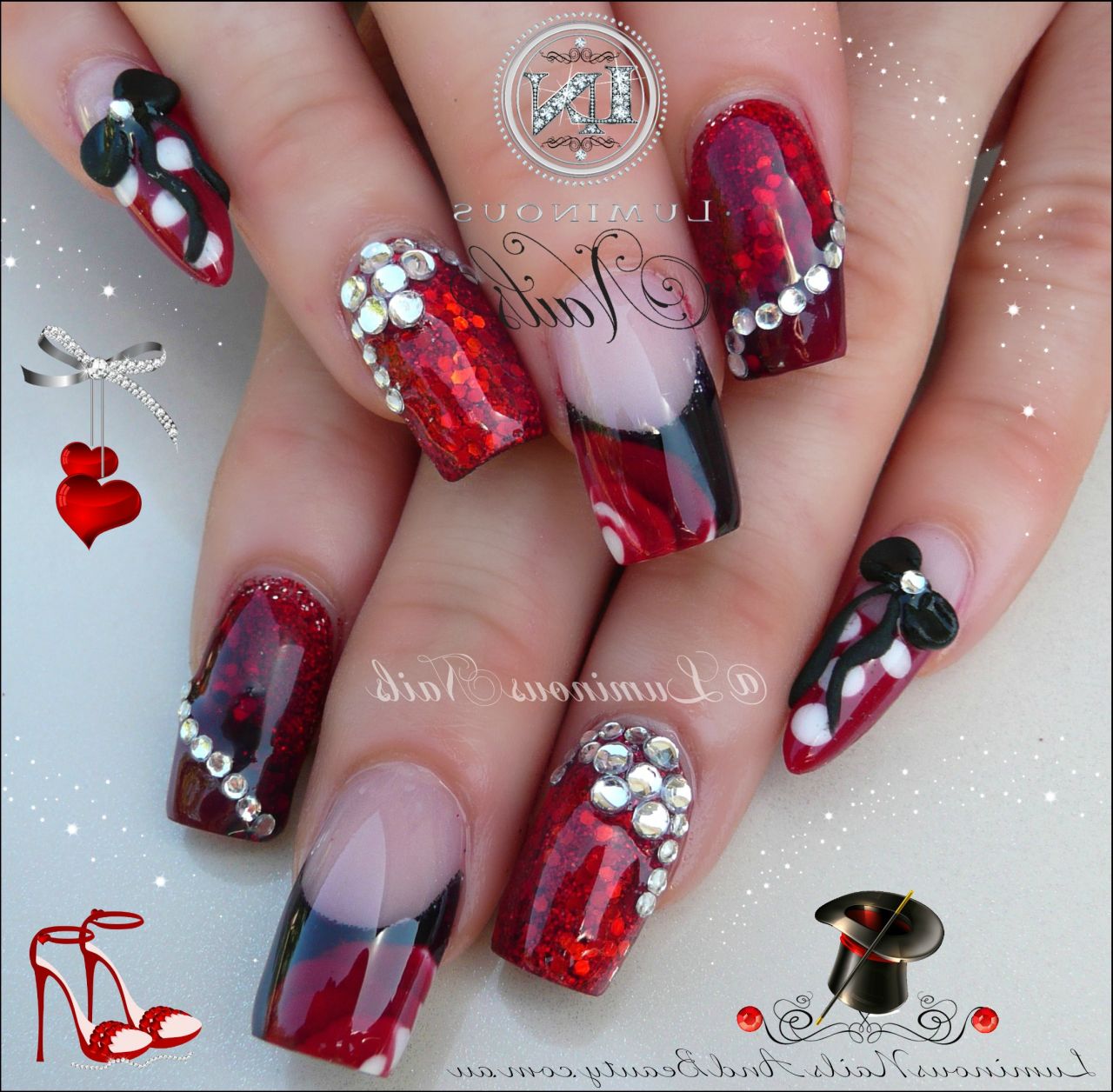 Are you much more experienced in nail art than the average person and you’ve been scrolling through our list looking for something a little more neat, detailed, and challenging to try and recreate? Well, you’ve finally reached that point in the post and we think you’ll like how well this manicure combines different techniques for a beautiful finished product! My Makeup DIY gives you the steps for creating a sassy, girly manicure using paint designs, inset glitter, rhinestones, coloured tips, and 3D gel building. We can’t get over how adorable the bows are! 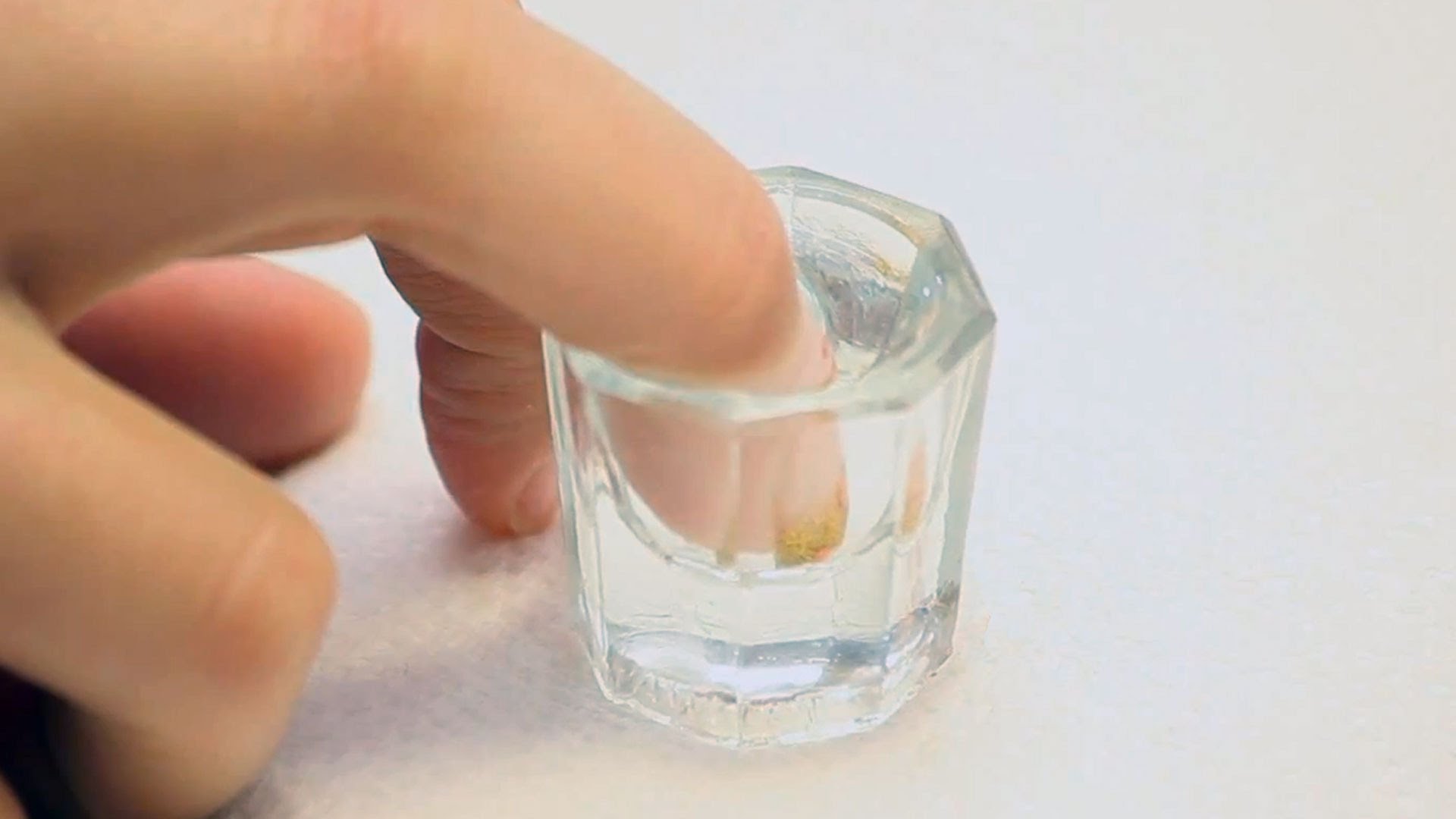 We’ve talked a whole lot about building, designing, creating, and embellishing acrylic nails, but anyone who has ever worn a set (whether they were press on or gel) can tell you that putting the nails on is hardly where the adventure in acrylic manicures ends. You’ll also want to know how to take them off safely without ruining your natural nails underneath! Whether you glued a set on and popped them off so they can be worn again later but were left with residual glue or whether you used gel acrylic and need to cut and dissolve them, this removal tutorial Naio Nails has you covered.

Do you know someone who loves making their own fake nails and giving their friends manicures, but who could use some inspiration? Share this post with them to give them some useful tips and tricks, as well as some new theme and embellishment ideas!